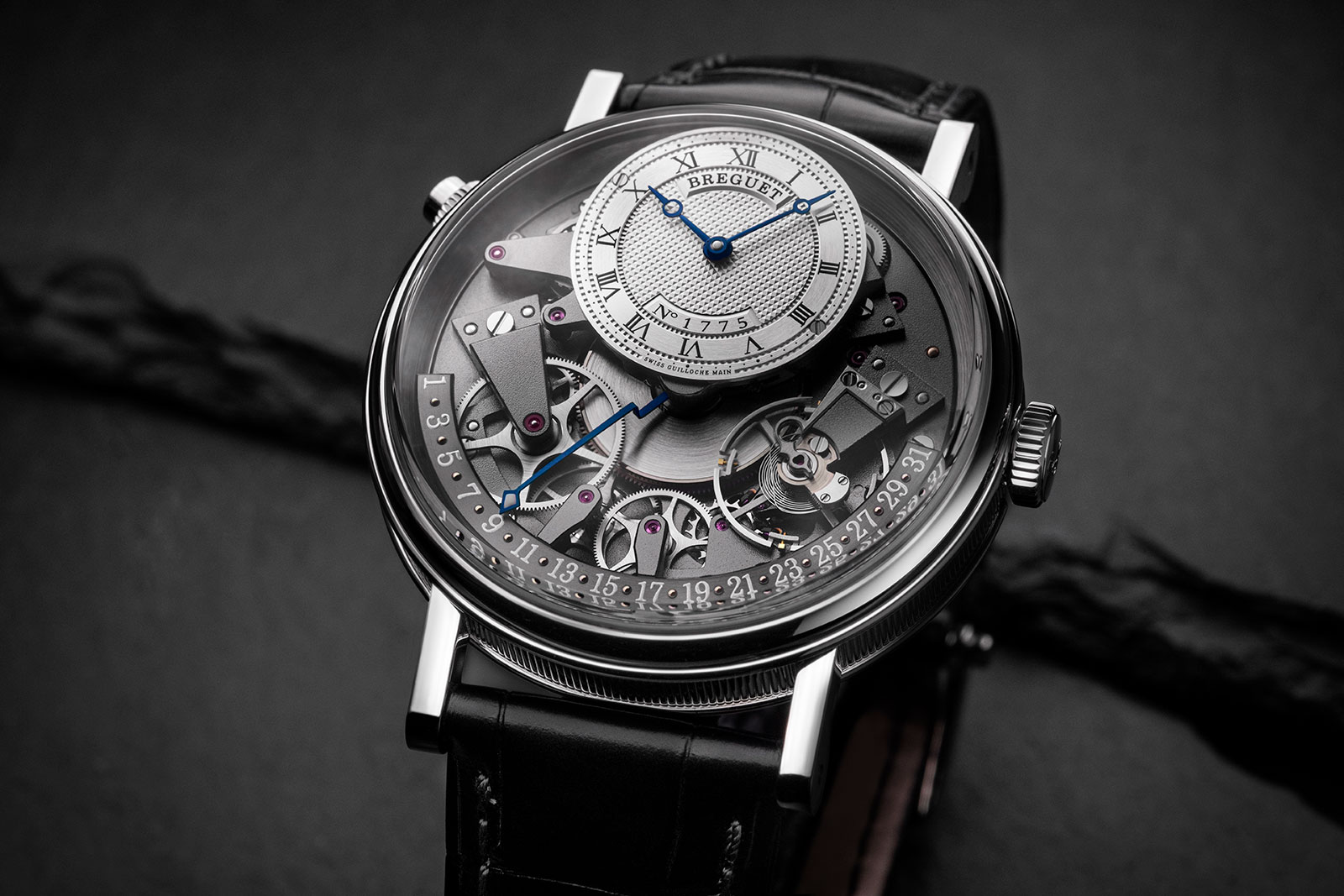 Endowed with an unmistakable aesthetic, the Breguet Tradition is based on the souscription calibre made by Abraham-Louis Breguet in 1796. Arguably the pioneer with the open-dial design that exposes the movement, the Tradition’s construction allows for creativity even with basic complications, like a retrograde seconds for instance.

The new Tradition Quantième Retrograde 7597 continues with the overarching theme of the line. Based on the Automatique Seconde Rétrograde 7097, the 7597 does away with the seconds display and instead installed an oversized retrograde date complication. 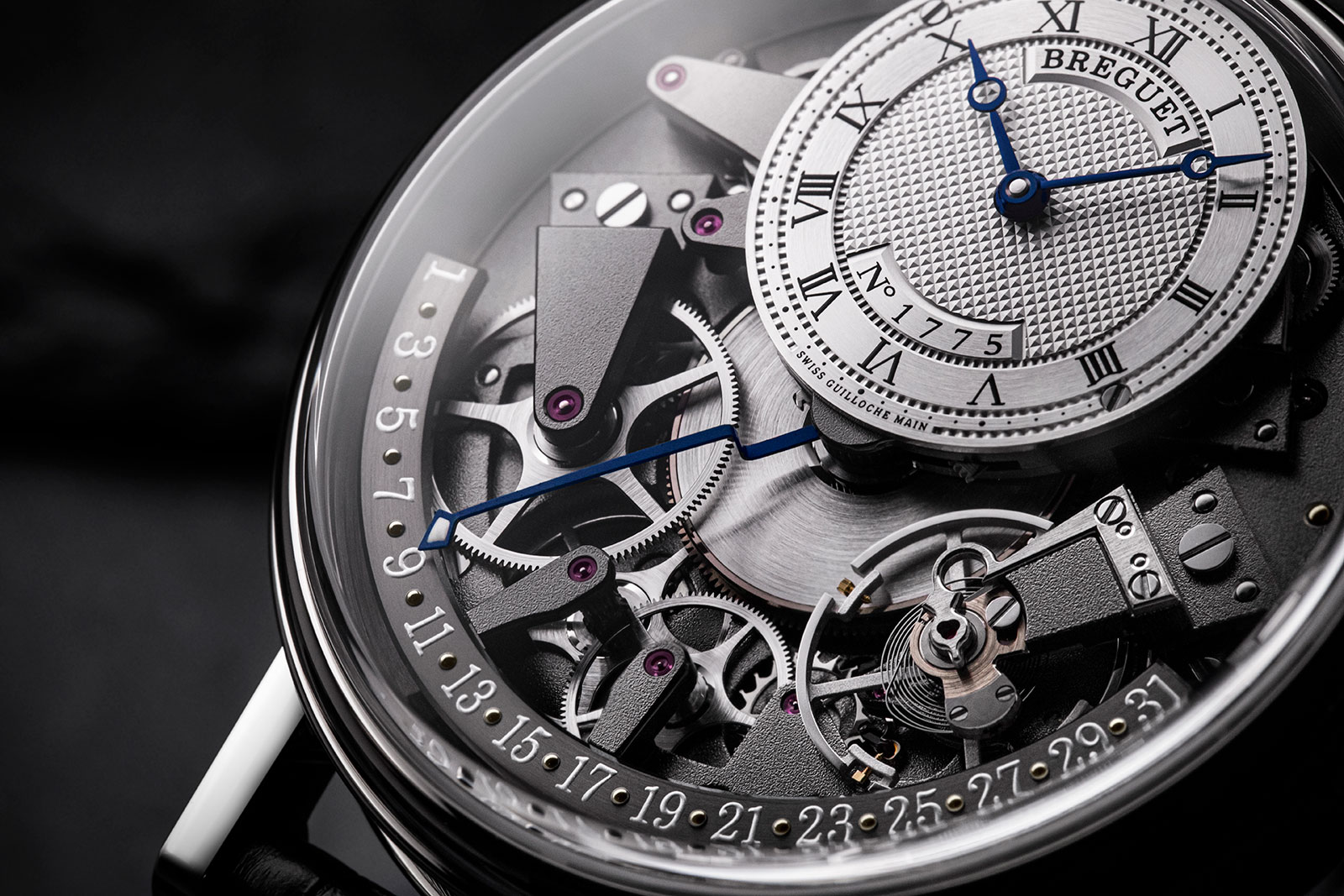 I find the Tradition aesthetic unique and charming, thanks to the characteristic, exposed movement construction that can seem haphazardly arranged at times. Despite the angular and geometric shapes of the bridges, most of them are trapezoidal in shape with few parallel edges, bestowing a more organic appearance to the highly mechanical appearance.

While a conventional date window is mundane, the retrograde date elevates the complication both visually and mechanically. Retrograde displays are often encountered in Breguet watches – something that started with A.-L. Breguet himself – and are typically done well, both stylistically and technically.

The Tradition 7597 is, in short, an attractively designed watch that sticks to Breguet’s tradition strengths in design and mechanics, while offering a useful complication executed in an elegant manner.

The 7597 retains the familiar Tradition look, with off-centred, engine-turned dial at 12 o’clock, powered by the mainspring at the centre of the watch. The going train for timekeeping occupies the lower half of the watch, and is fully exposed thanks to the minimal bridges.

Prominent at four o’clock, the balance wheel is a fusion of traditional and modern technology – combining both a silicon hairspring and a Breguet overcoil. Right now, Breguet is the only watchmaker offering watches equipped with such a hairspring. 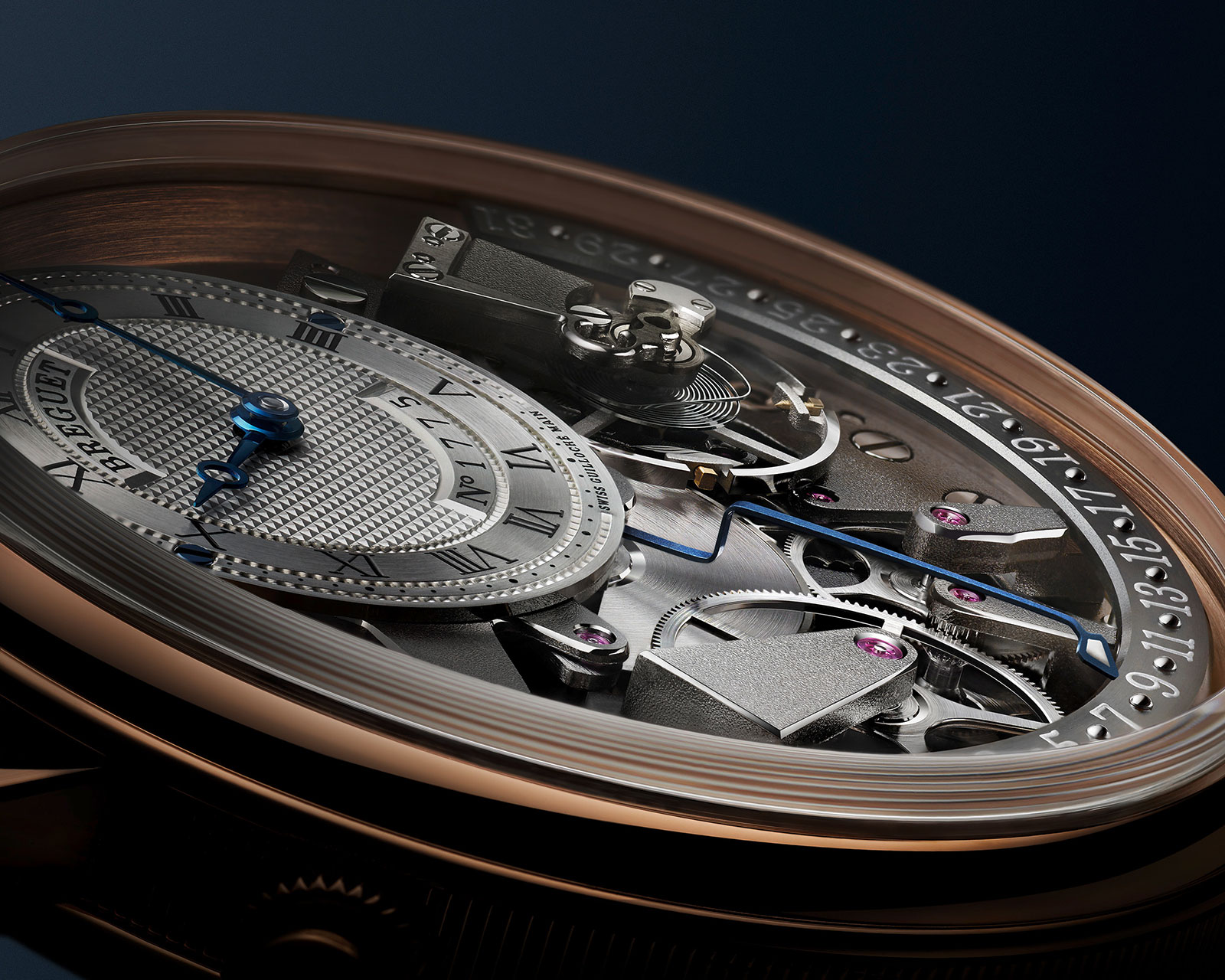 Of course, the highlight of the 7597 is the retrograde date that spans the perimeter of the movement’s lower half. The date jumps one a step per day till it reaches the 31st day of the month, and then performs a full, clockwise jump back to “1”.

The scale for the date is elaborately constructed with thick, pad-printed numerals for the odd-numbered days, which are separated by applied, polished spheres as an added flourish. And the date hand is blued steel and finished with a matte, frosted surface, and bent upwards to clear the movement bridges underneath. 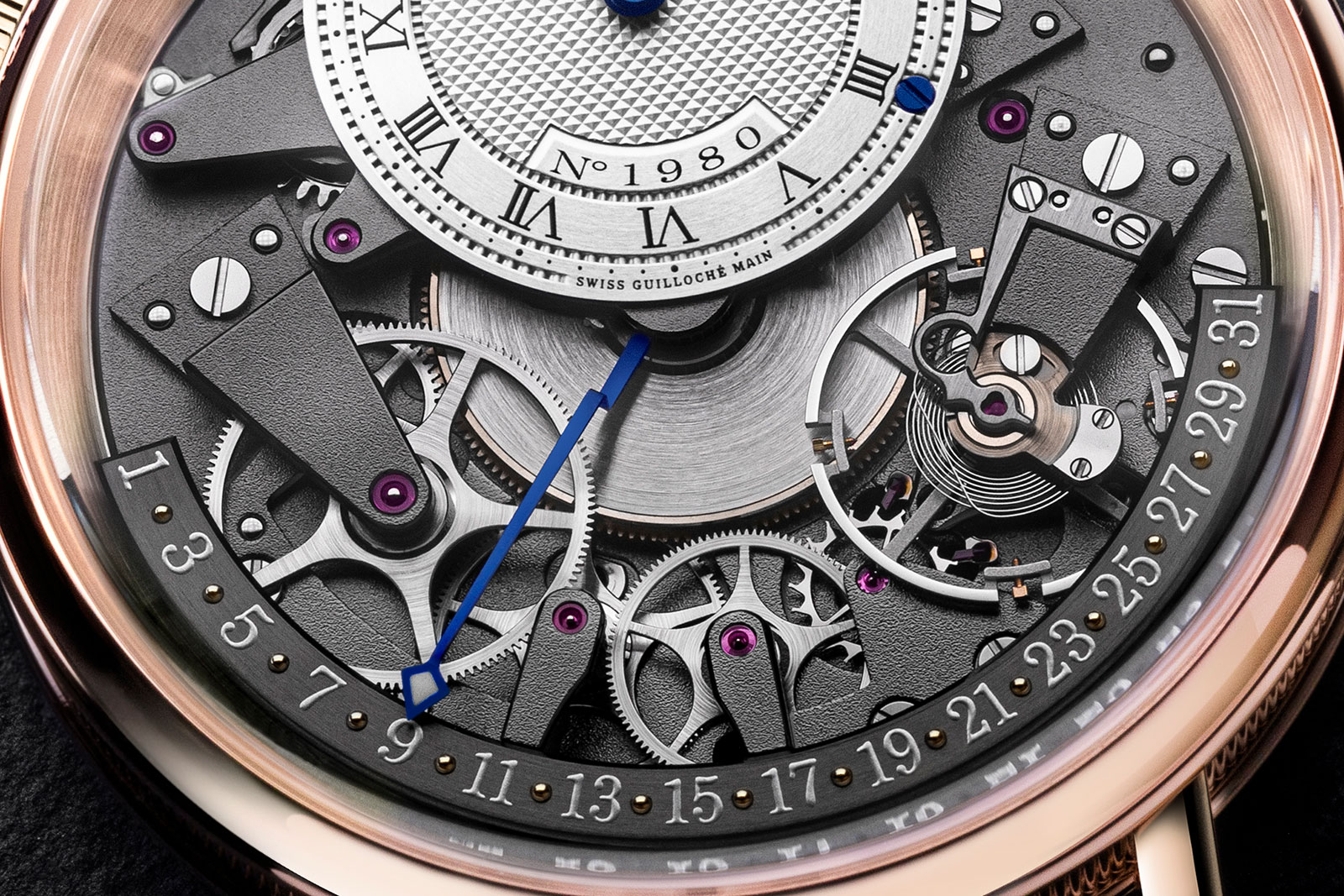 Since the 7597 makes use of the empty space under the off-centre time display for the date, the case retains the 40mm diameter of the 7097 it is derived from.

The case construction is classically Breguet with coin edge fluting on the case band and narrow lugs. The addition of a screw-in pusher at 10 o’clock allows for quick corrections of the date. 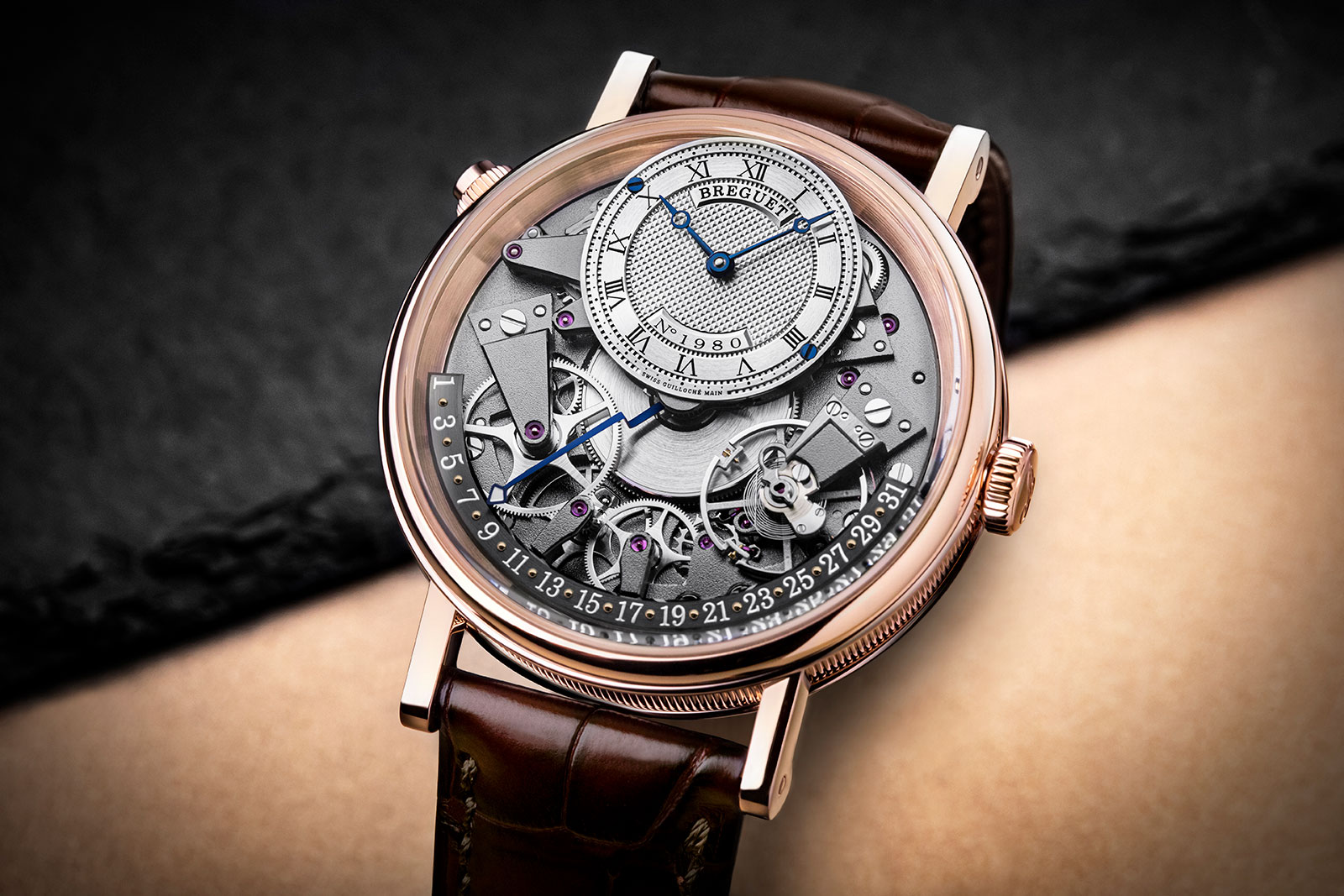 With majority of the movement on the front, there is little to reveal in terms of mechanics on the back. Thus, the rear is dominated by a large, white gold rotor. Shaped like a pendulum, the rotor is modelled on the swinging weight found in 19th century pocket watches with hammer winding, a primitive form of the self-winding mechanism. 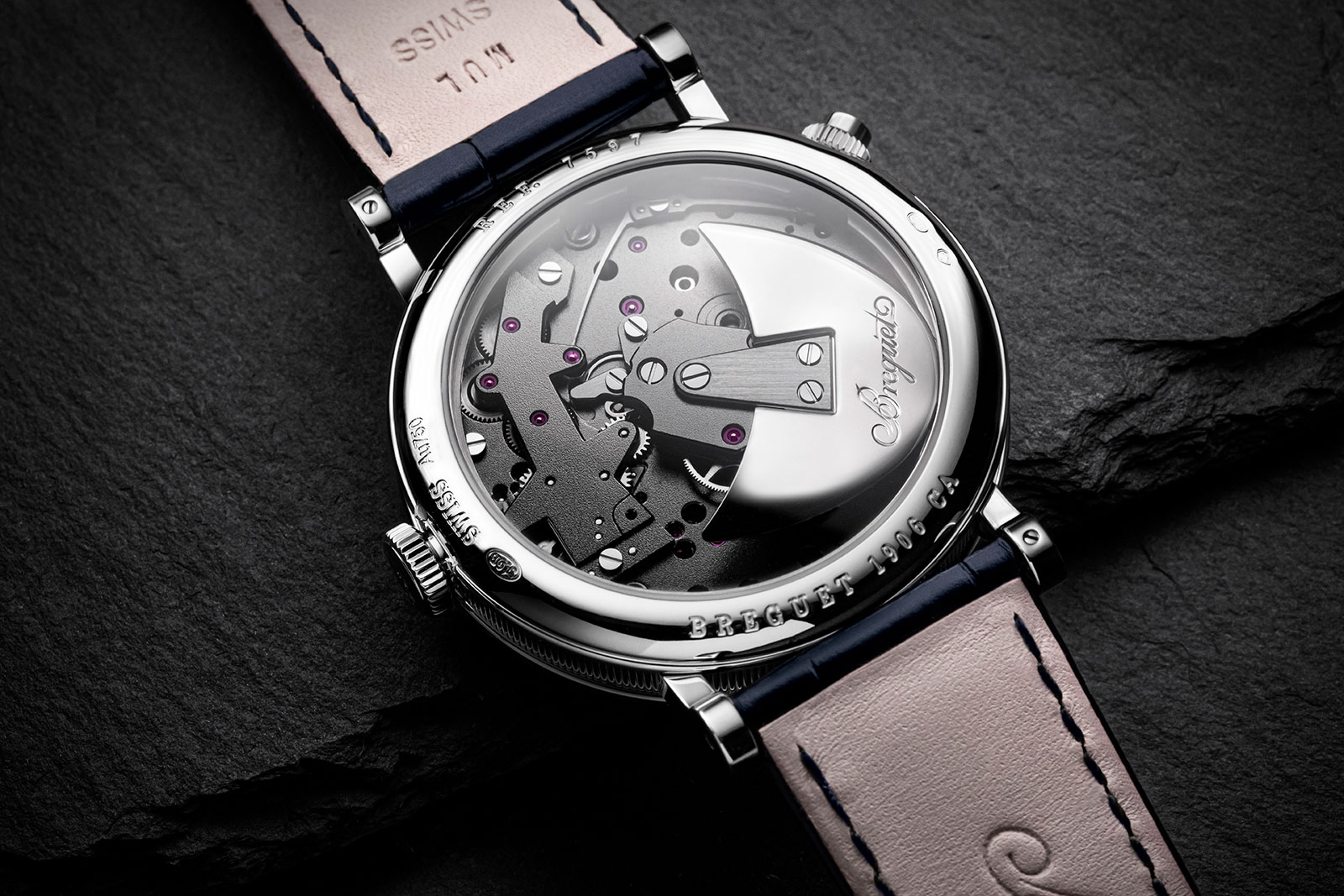 The rotor sits on what is otherwise a sparse movement plate, with the key feature being a large, geometrically complex bridge next to the crown, which holds the wheels for winding and time-setting. 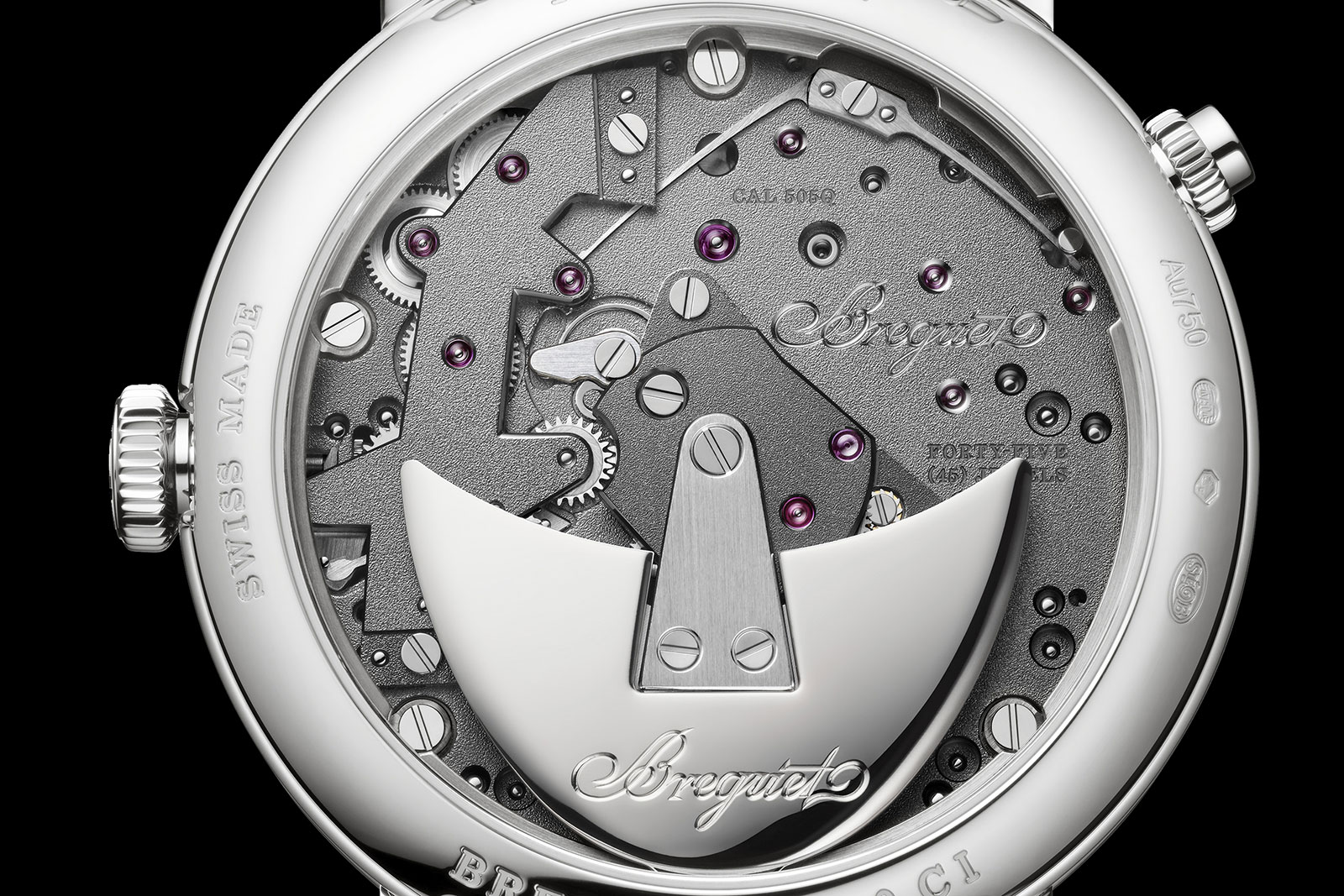