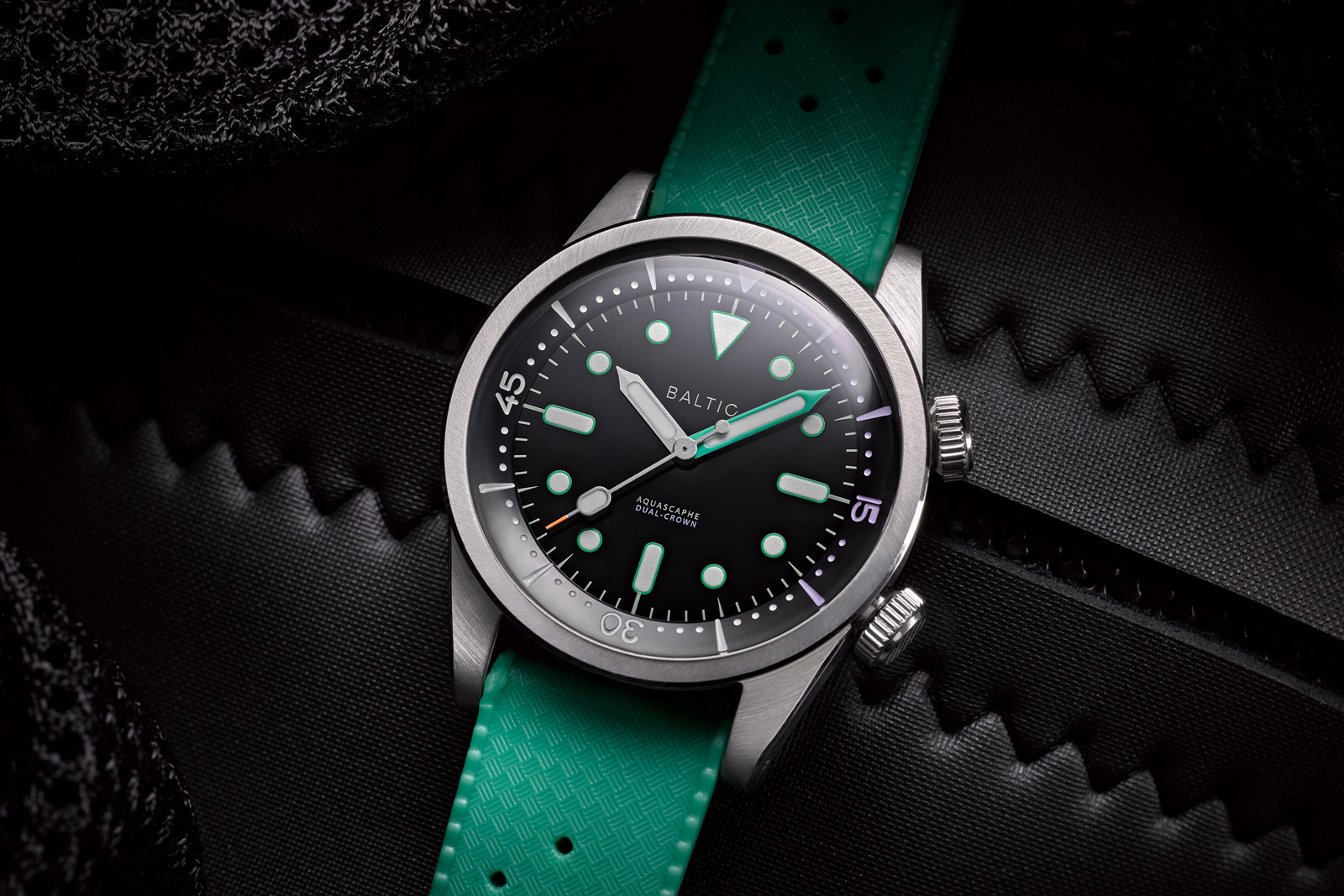 Founded in 2017, French brand Baltic quickly found success with its affordable, retro watches. The brand is now celebrating its fifth anniversary with a few commemorative editions in the pipeline, the first being the Aquascaphe Dual-Crown “5th Anniversary”, a retro “Super Compressor” style dive watch dressed up in streetwear colours of the 1990s, the decade during which the thirty-something founders of the brand grew up.

A micro-brand that got its start via crowdfunding, Baltic’s growth is a testament to its commercially-sensible products. Its watches are amongst the best propositions when it comes to retro watches. Baltic’s watches are all eminently affordable, with just enough details to give them a tiny bit more appeal than their prices would suggest. 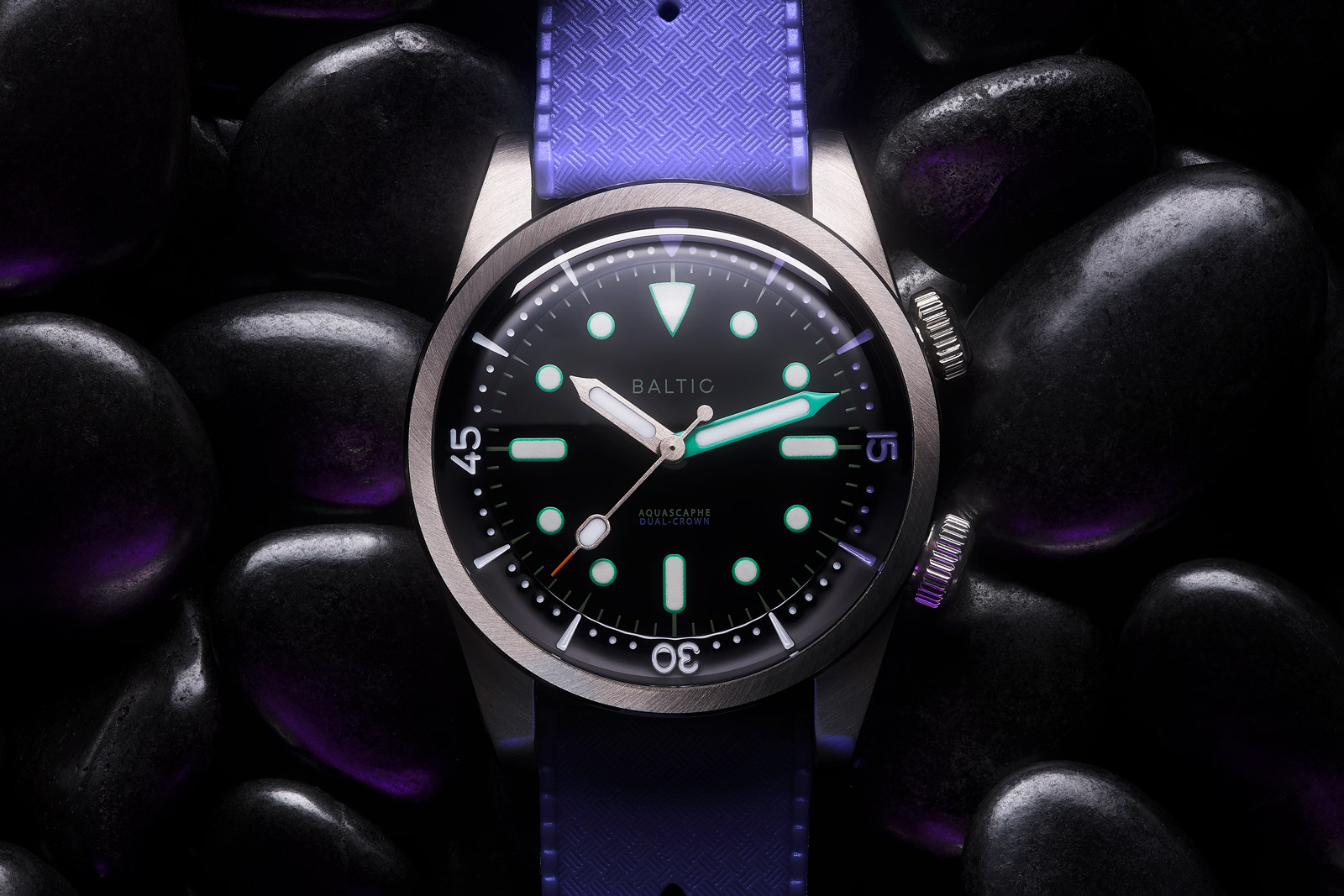 The anniversary model continues where the original Dual-Crown left off, which is colour, or lack thereof. For anyone who liked the original but wanted something more lively, this is it. 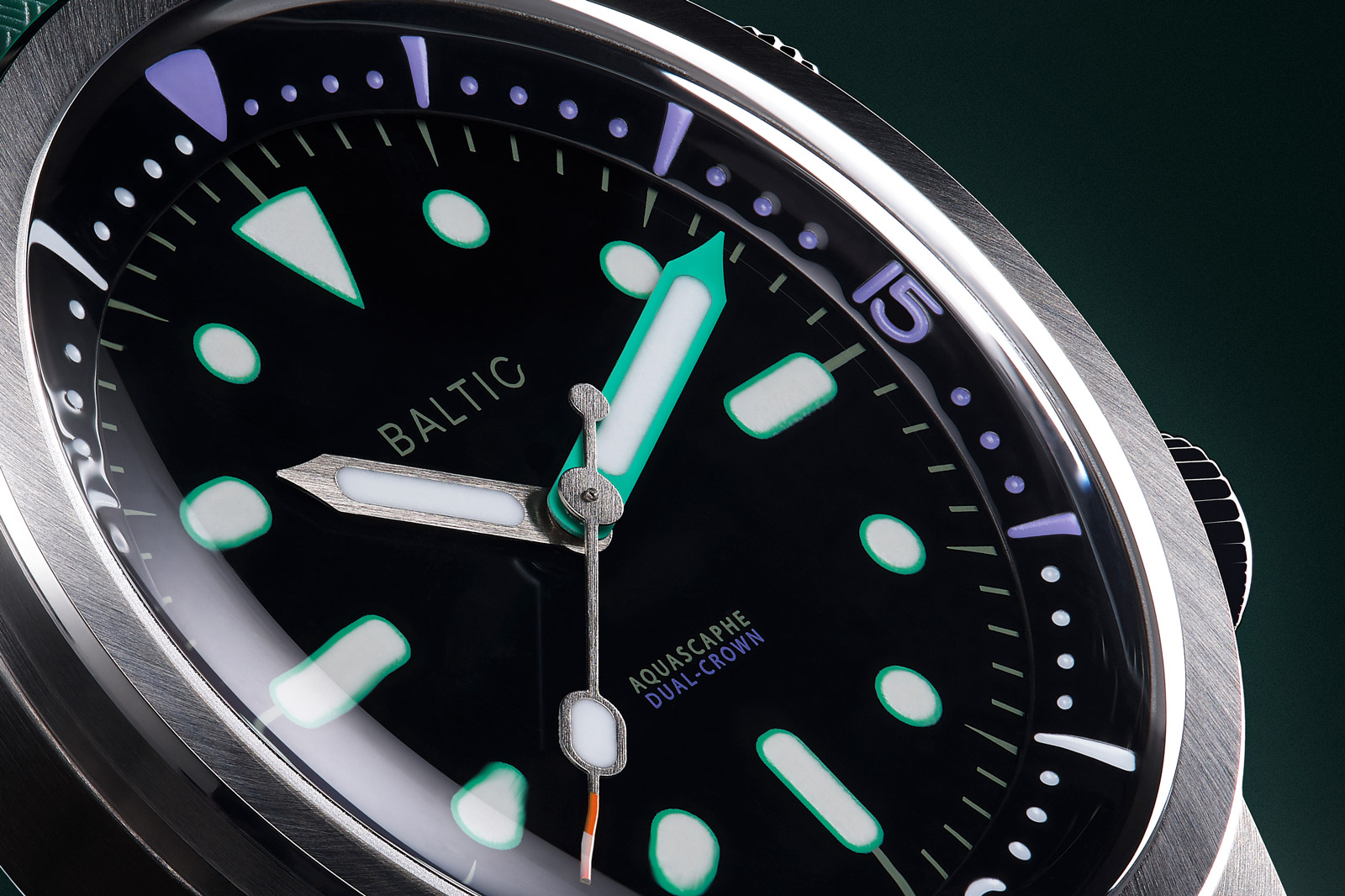 The anniversary Dual-Crown is only differs from the standard model in subtle ways, perhaps too subtle. As a result it does not have the strongly coherent aesthetic of Baltic’s other watches, which are clearly and decisively vintage inspired. And that is made obvious by the fact that the brand has already set the bar high with its past vintage-inspired designs. Personally I find it a bit underwhelming in terms of design (and I don’t identify with the nineties colours either having grown up a decade later).

Still, the anniversary model is priced exactly the same as the regular-production version at €650, despite being a limited edition of 200 pieces. So for anyone who likes the colours this is a no brainer. And the price also puts it within the ballpark of offerings from Japanese watchmakers such as those from Seiko, but the Baltic stands out with its twin crowns and retro flair.

The three founders of Baltic, Etienne, Paul, and Clément, grew up in the nineties. Each of them picked a colour they felt was emblematic of the era and then applied it to the dial and strap, giving the new Dual-Crown a cheerful style that makes it an ideal summer sports watch (Baltic also offers a single-crown Aquascaphe). While one might expect something excessive with such neon colours, the result is surprisingly restrained.

Green is the most prominent colour on the watch, which has the hour markers and minute hand in the shade. Purple is found the first 20 minutes of the scale on the inner rotating bezel, while the seconds hand has a splash of red on its tip. To go with the dial, the watch is delivered with two rubber straps, in green and purple. 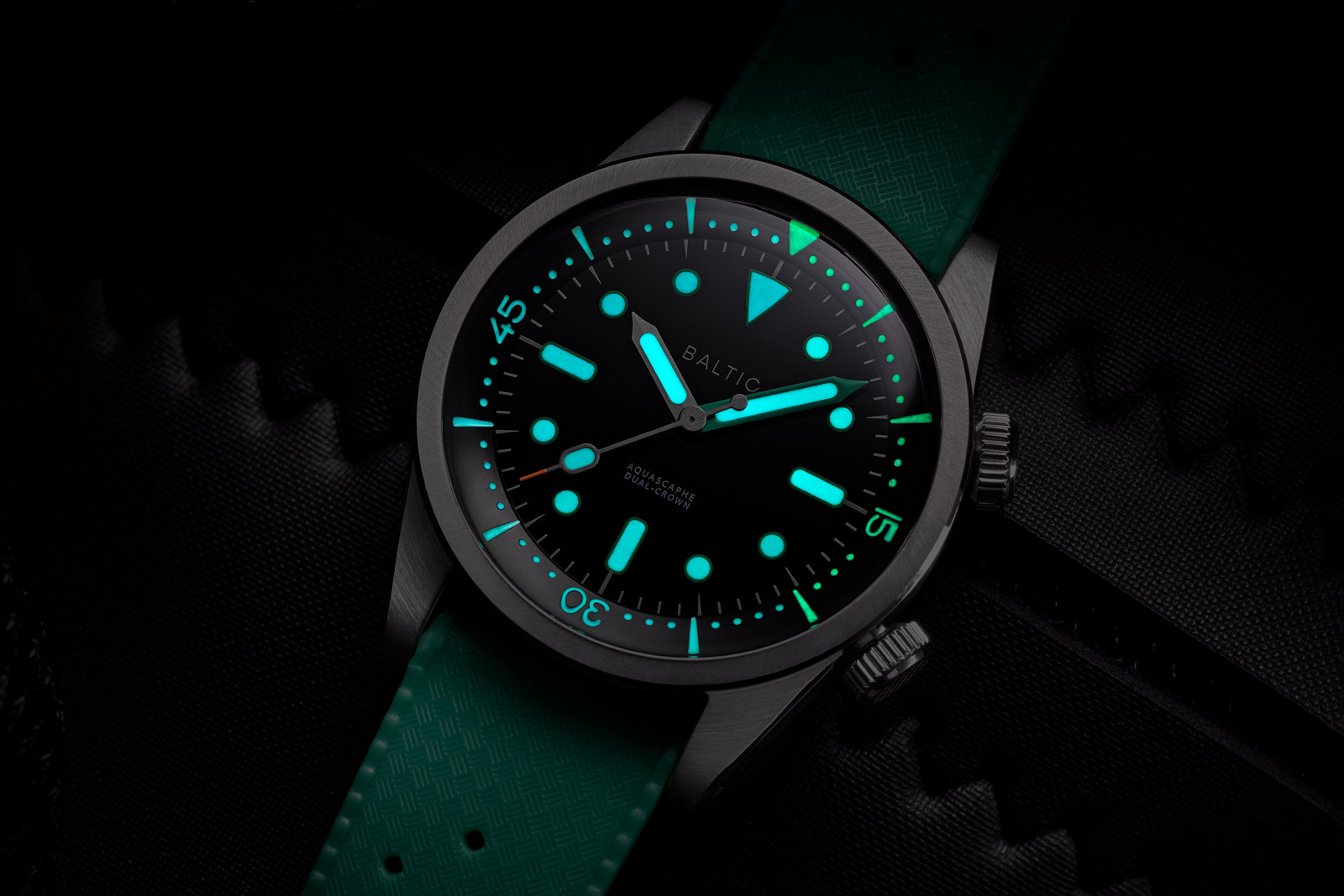 The inner rotating bezel is painted with luminescent material

Like Baltic’s other watches, the Dual-Crown is a compact watch at 39 mm wide and 11.9 mm tall, dimensions that are relatively uncommon for watches in this price segment, where big and bigger is preferred.

Its size is thanks in part to the Miyota 9039 within, a thin movement that beats at a modern rate of 28,800 vibrations per hour, or 4 Hz. It has a power reserve of 42 hours as well as a stop seconds. 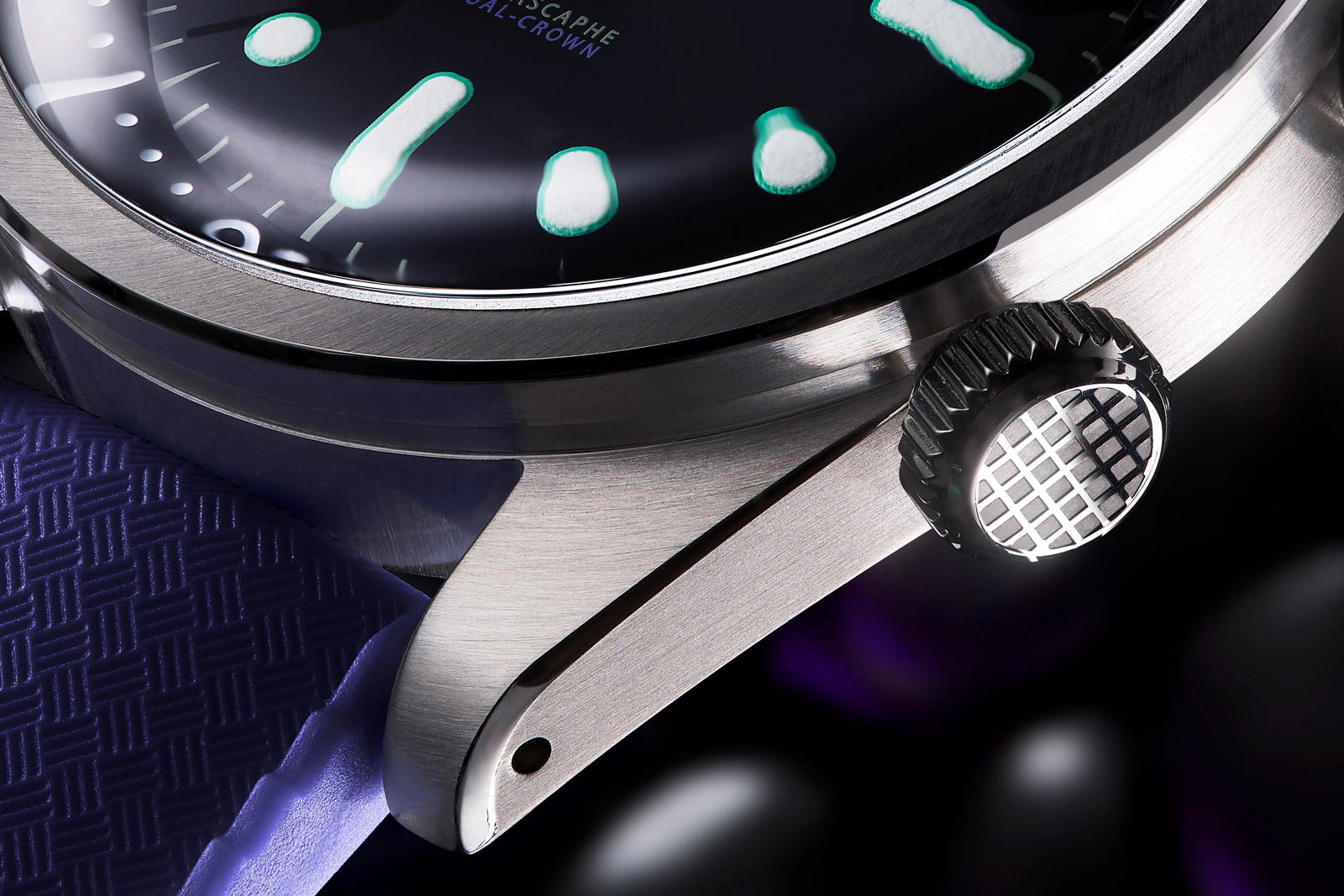 Compared to the brand’s earliest models, the Dual-Crown sports improved case details, including polished bevels along the edge of the case flanks