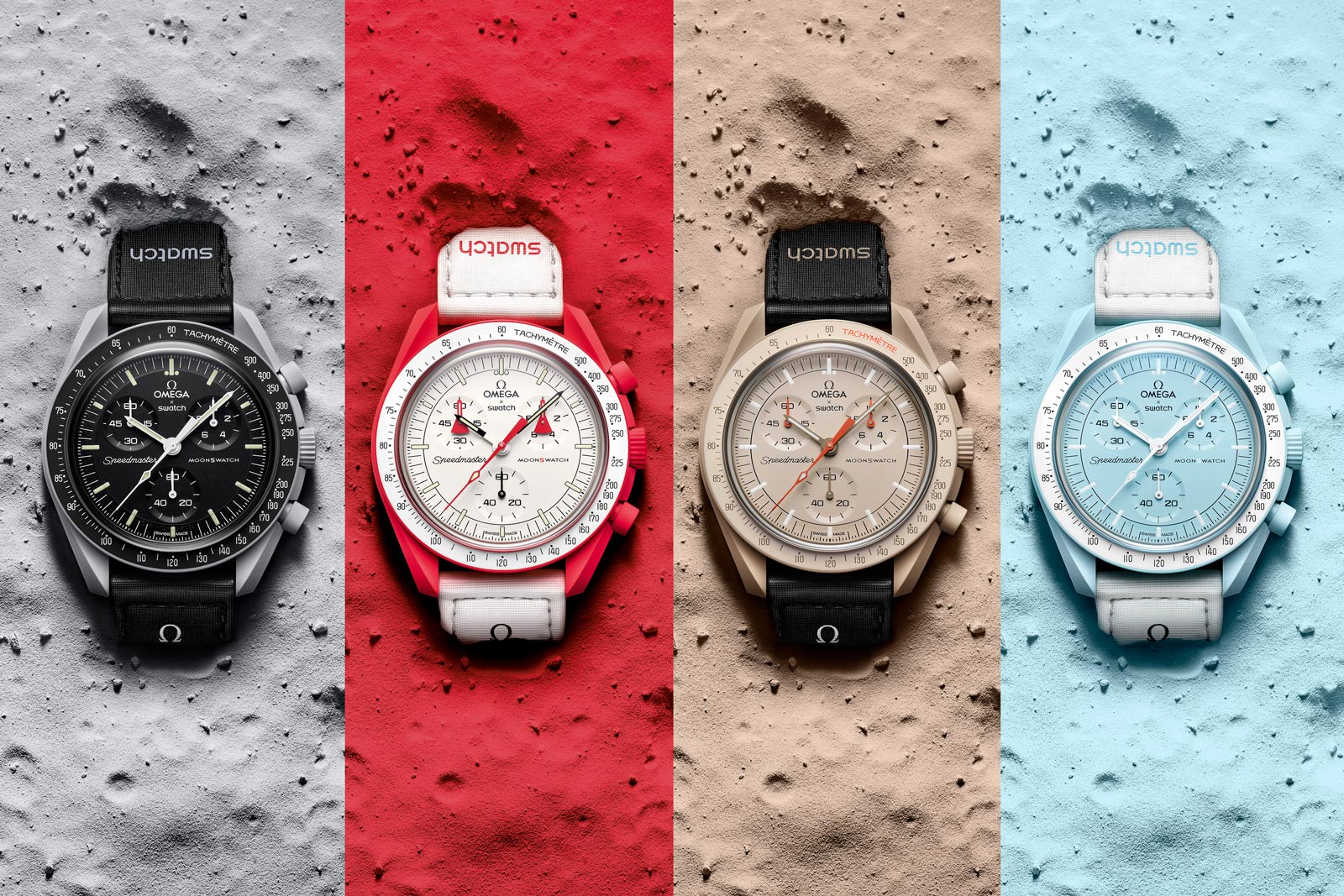 Perhaps the most surprising launch of the year so far, the Bioceramic MoonSwatch is a collaboration between Swatch and the maker of the Speedmaster Professional.

The MoonSwatch is essentially Moonwatch “lite” – it has all the key details such as lyre lugs and a Velcro strap, but a quartz movement and small price tag.

And the MoonSwatch is next level in terms of range. Whereas the original Moonwatch is mostly black, Swatch offers almost dozen variants of the MoonSwatch, each dedicated to the most significant bodies of the solar system, such as the Sun, Moon, and Mars. 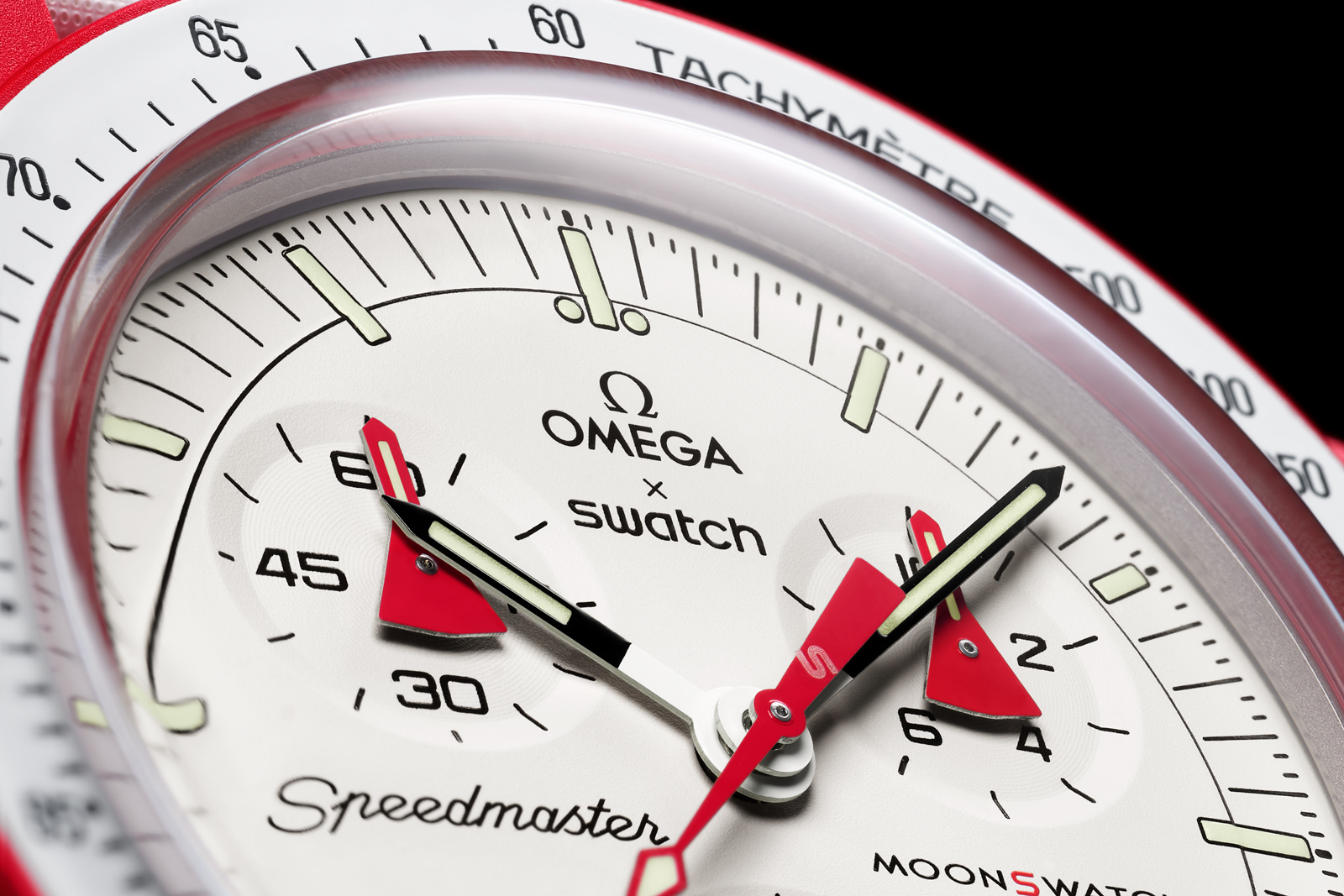 The MoonSwatch “Mission to Mars”, a tribute to the Speedmaster “Alaska Project” but with the entire case in bright red ceramic

The MoonSwatch is an exemplary crossover because its encapsulates the specialties of each brand. Combining the quintessential cheerful style of Swatch with Omega’s iconic Moonwatch results in a fun, lighthearted watch that’s very affordable.

But it’s also a shocking product because the two brands are poles apart in terms of positioning and pricing. Put simply, an Omega strap costs more than the average Swatch watch.

Swatch is clearly the winner. It’s an especially shrewd move for the maker of plastic watches, since some of the prestige and historical significance of Omega rubs off onto Swatch.

As for Omega, it’s a purposeful act of brand dilution, no doubt in the hope that it brings the brand to a new audience that will aspire to own the real deal one day. But it’s too early to tell whether that’s a good strategy for a luxury watchmaker – Omega is number three in terms of revenues but reputedly aspires to be number one – but there will surely be Moonwatch owners who frown at the the lookalike. 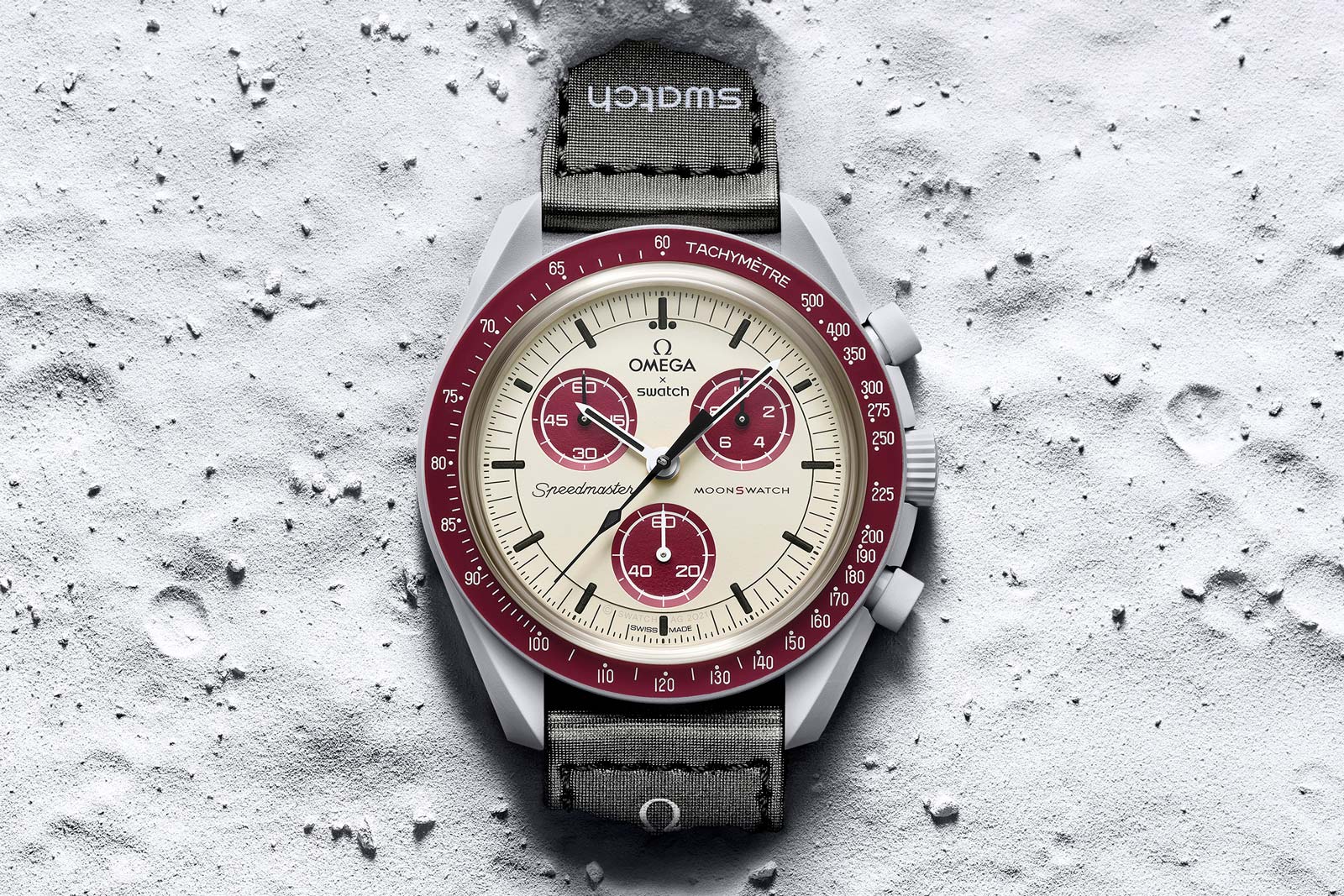 The “Mission to Pluto”

That said, the MoonSwatch will be an immediate hit, because it feels almost rebellious with its low price and fun colours. In a world where appealing watches are mostly unavailable, the diverse line up is laudable for being accessible and fun.

But it is a certainty that these watches won’t be accessible initially as demand will definitely outstrip supply at the start. And for now, they can only be purchased in selected Swatch boutiques, which is antithetical to the purpose of the product. I hope broader availability eventually becomes the norm, and Swatch’s prowess in mass production should mean that everyone who wants one will be able to have one in the near future. 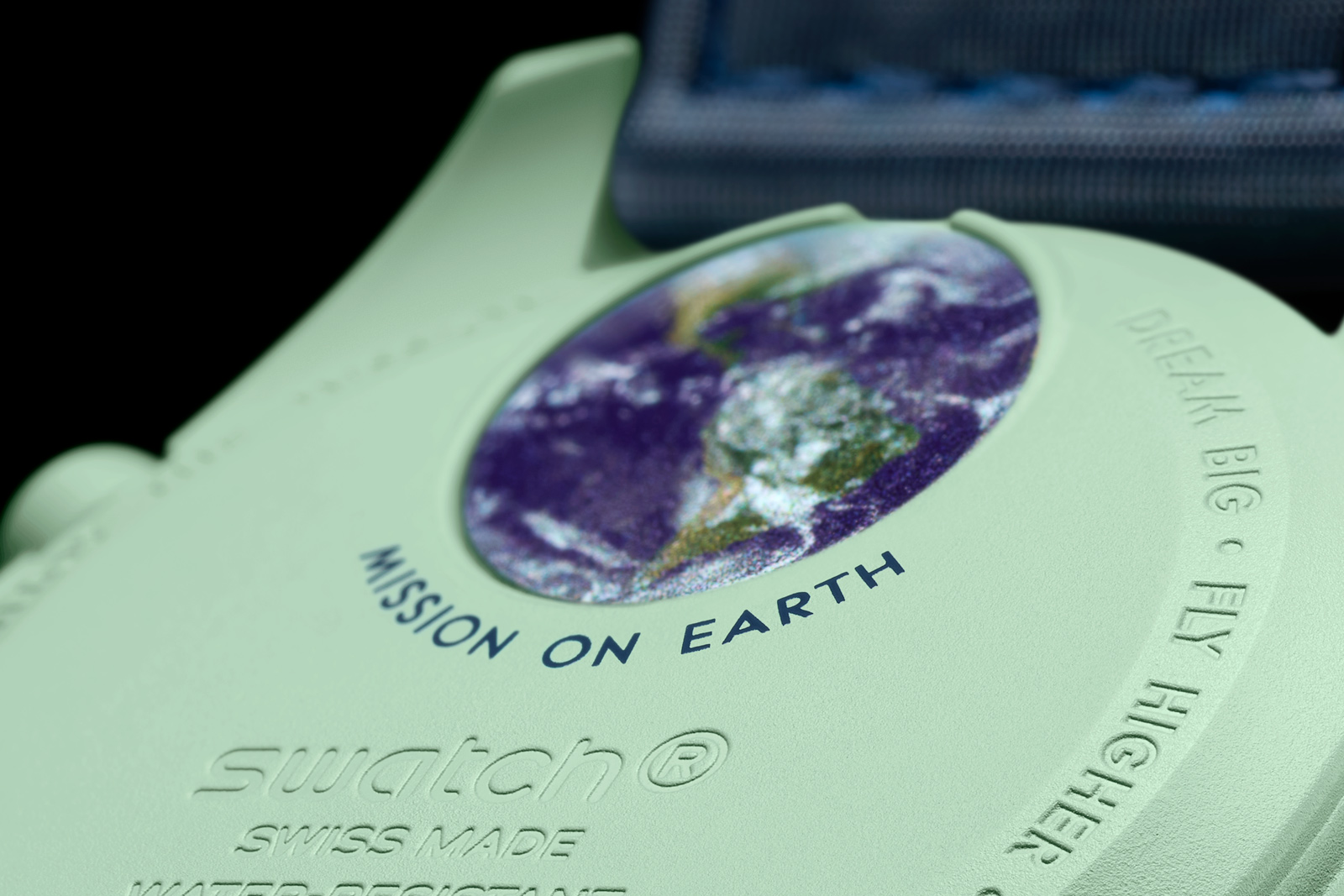 The MoonSwatch is especially notable for the faithful details straight out of the Moonwatch, without which it would just be yet another colourful Swatch.

For starters, the case is 42 mm like the Moonwatch. And it even features a similar profile with a wide bevel along the lugs as well as the steps between the bezel and the case.

And the dials and crystal also have a few subtle details that only Moonwatch fans will notice. Hardcore nerds will also appreciate the reproduction of details like the “dot over 90” tachymeter bezel and also the “secret signature” on the crystal. 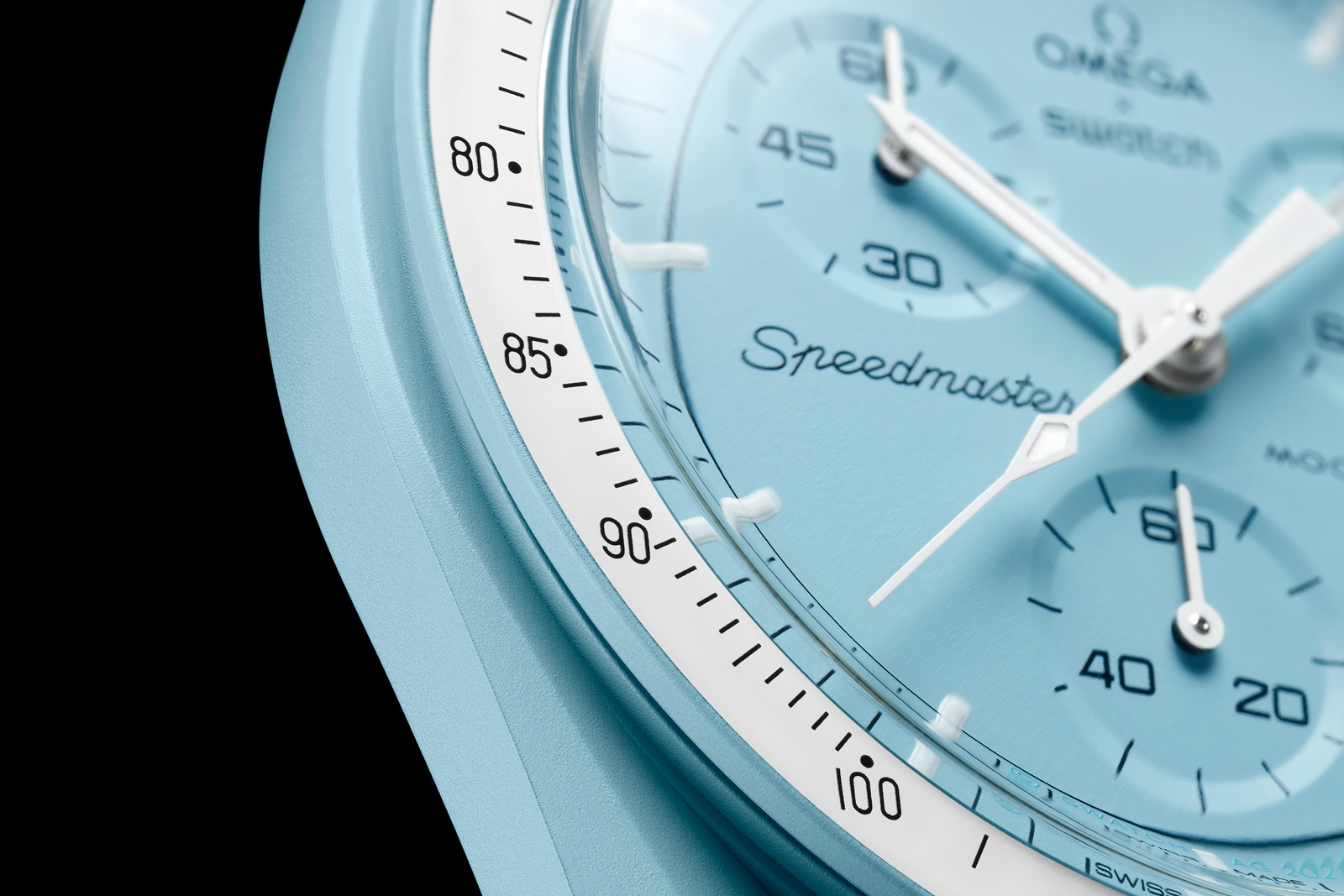 “Dot over 90” and a stepped dial, as seen on the “Mission to Uranus” 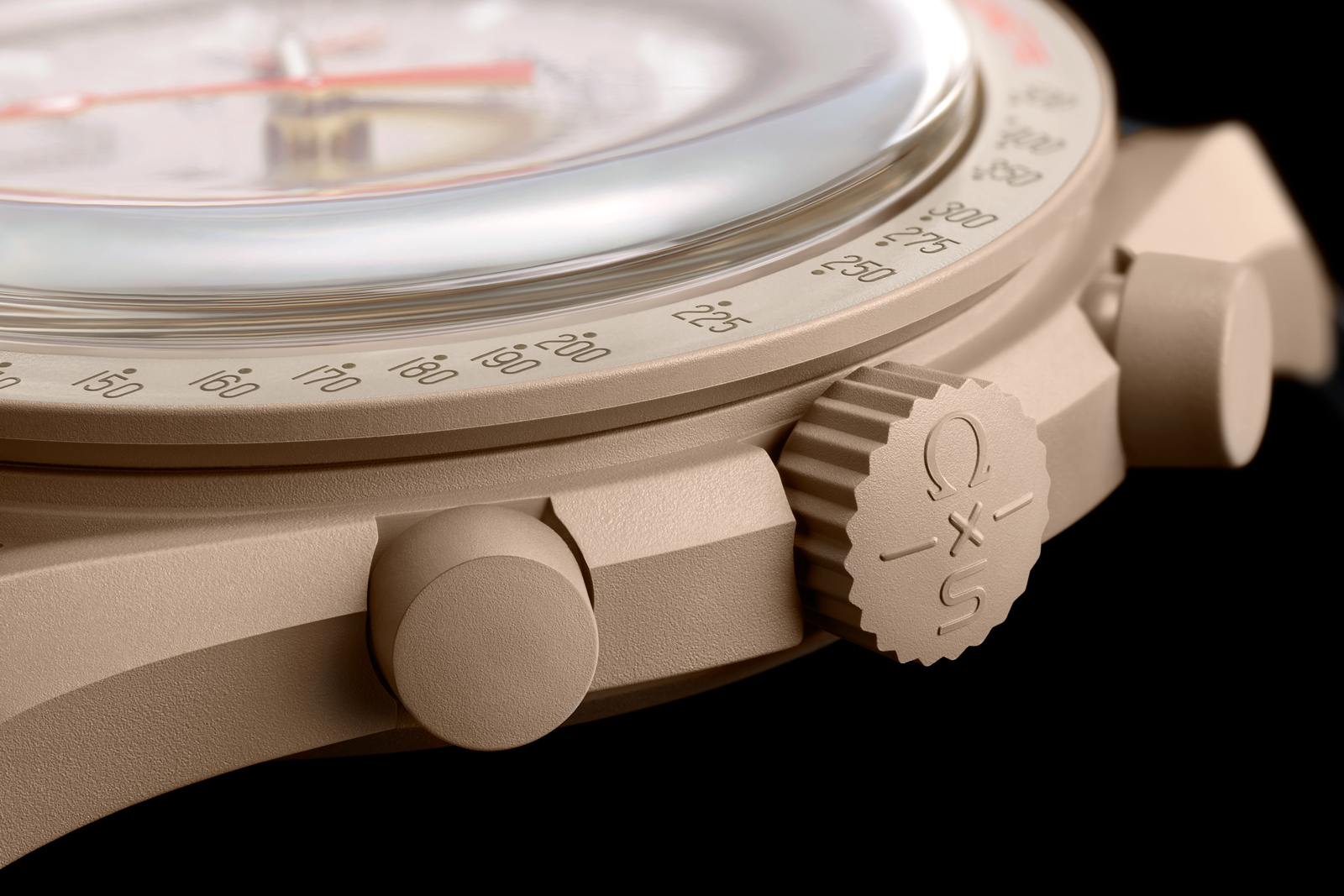 The crystal is raised and domed, here on the “Mission to Jupiter”

But there are of course differences between the original and the MoonSwatch, as a result of the different movements.

While the Moonwatch has a hand-wind calibre evolved from the Lemania 1873, the Swatch relies on the standard ETA quartz movement found in all Swatch chronographs, explaining the unusual (for a Moonwatch) arrangement of the chronograph registers. 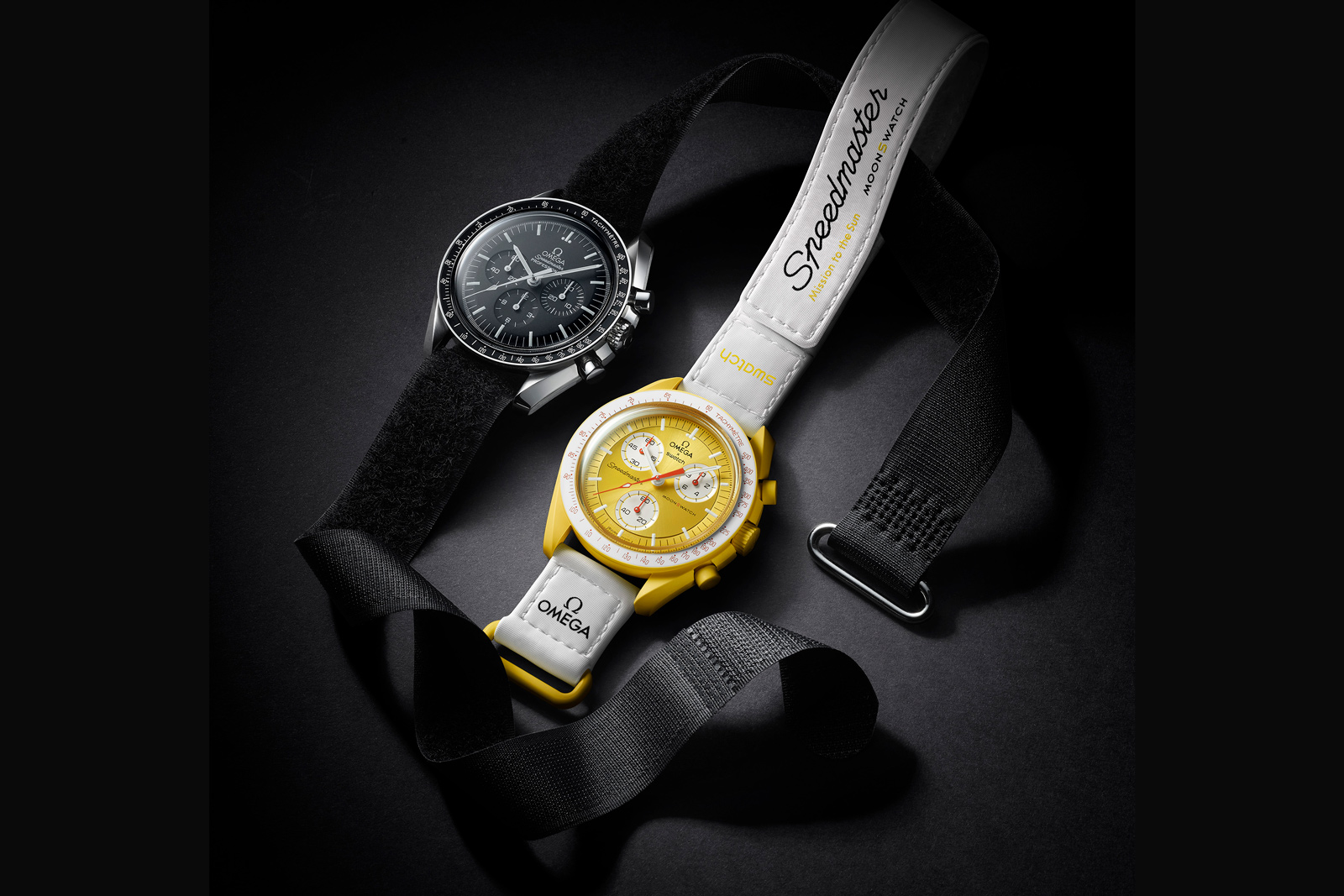 The Moonwatch (left) and the MoonSwatch “Mission to the Sun”

The layout is synonymous with a low-end quartz chronograph, which makes it somewhat less appealing. But that is more that made up for by the colourful dials and cases. The combinations range from the low-key, near-faithful homage to the Moonwatch with the “Mission to the Moon”, to extremely creative versions such as the “Mission to Saturn” where the planet is depicted on the dial. 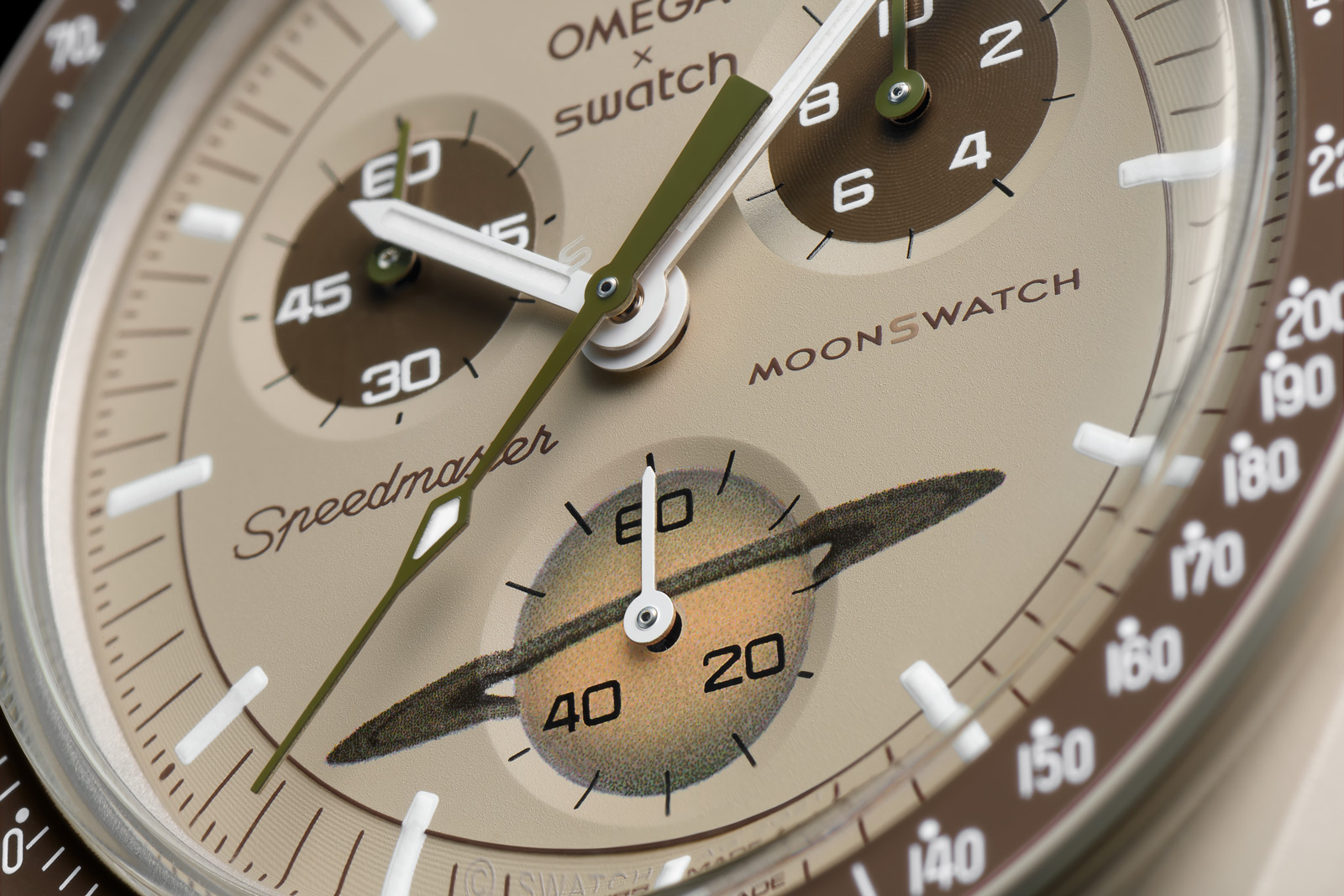 The “Mission to Saturn”, in an angle where the “S” engraving on the crystal shows

Limited edition: No, but each customer is limited to two watches
Availability: Starting March 26 at selected Swatch boutiques
Price: US$260, or 372 Singapore dollars.