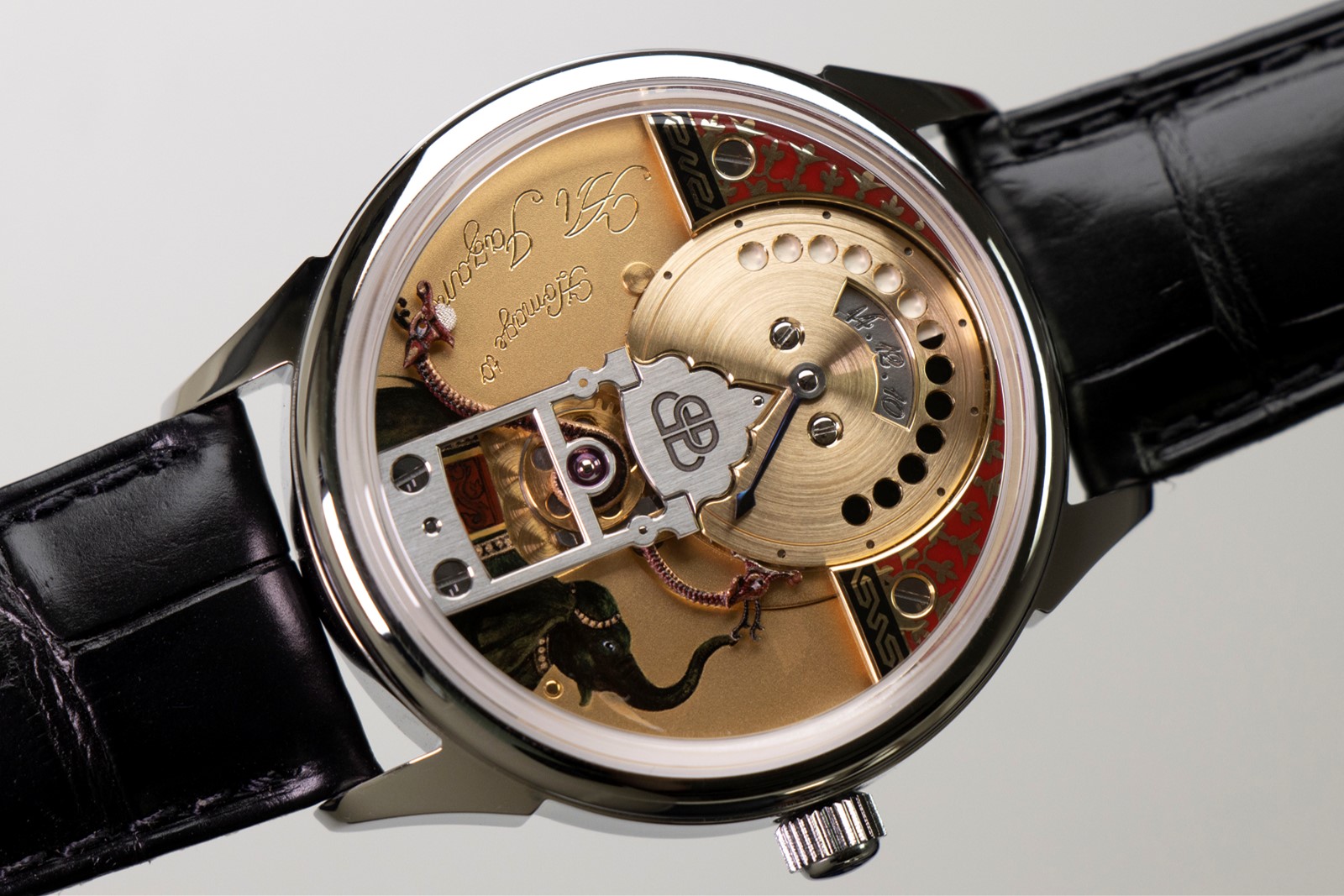 A member of the Académie Horlogère des Créateurs Indépendants (AHCI), John-Mikaël Flaux is no stranger to automata and clocks. His most recent creation however, is something smaller and wearable – an automata wristwatch, the Homage to Al-Jazari.

The watch pays tribute to the Elephant Clock, a fascinating and exotic timekeeper conceived by the 12th century inventor and mathematician, Ismail al-Jazari. While not an exact replica of the original – the ancient clock was powered by water and gravity – Mr Flaux’s creation artfully captures the theme of the clock with a jumping half-hour automata and an equivalent 24-hour day night indicator, complemented by miniature painting on the front and back. The Homage to Al-Jazari is undeniably intriguing, both mechanically and visually.

The watch has a brave design that is striking. The complexity of the dial means legibility isn’t the best, or even decent, but that’s besides the point.

While its key complication, a jumping half-hour mechanism, is not technically complex, the integration of the thematic elements into a cohesive display modelled on the ancient clock means the whole is greater than the sum of its parts. In other words, the Homage to Al-Jazari lives up to its name. 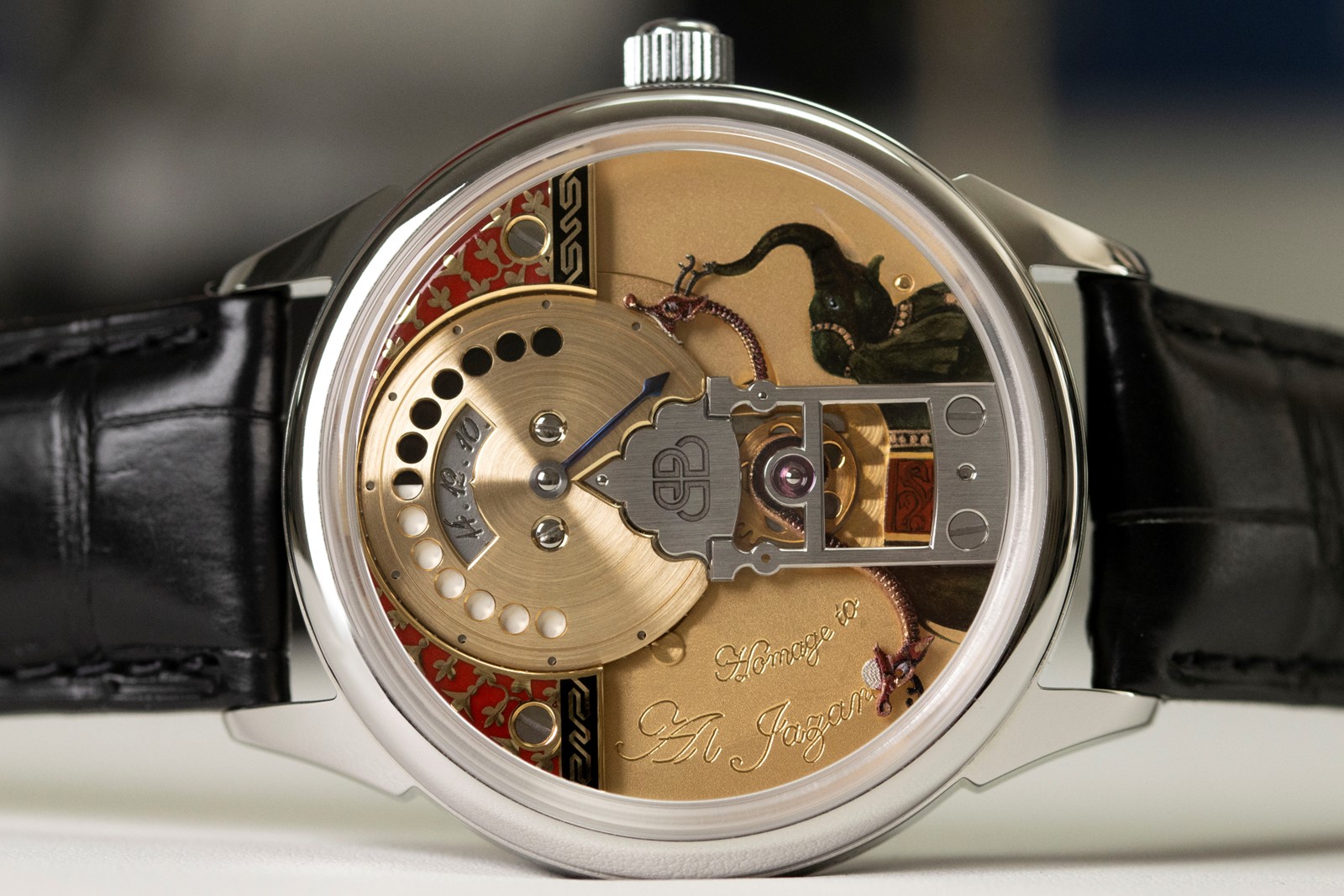 But it is also a missed opportunity. The jumping automata display would have been perfect if paired with a simple chiming function, though that would’ve significantly increased the complexity, due to the requirement of a base movement with a bigger barrel in order to power an audible chiming mechanism.

Priced at CHF 49,000, the Homage to Al-Jazari might appear steeply priced since the base movement is a modified Unitas. However, its value is more than just the base calibre, but rather the inventiveness of the time display, the artisanal nature of the miniature paintings, as well as the hand finishing of the dial components. 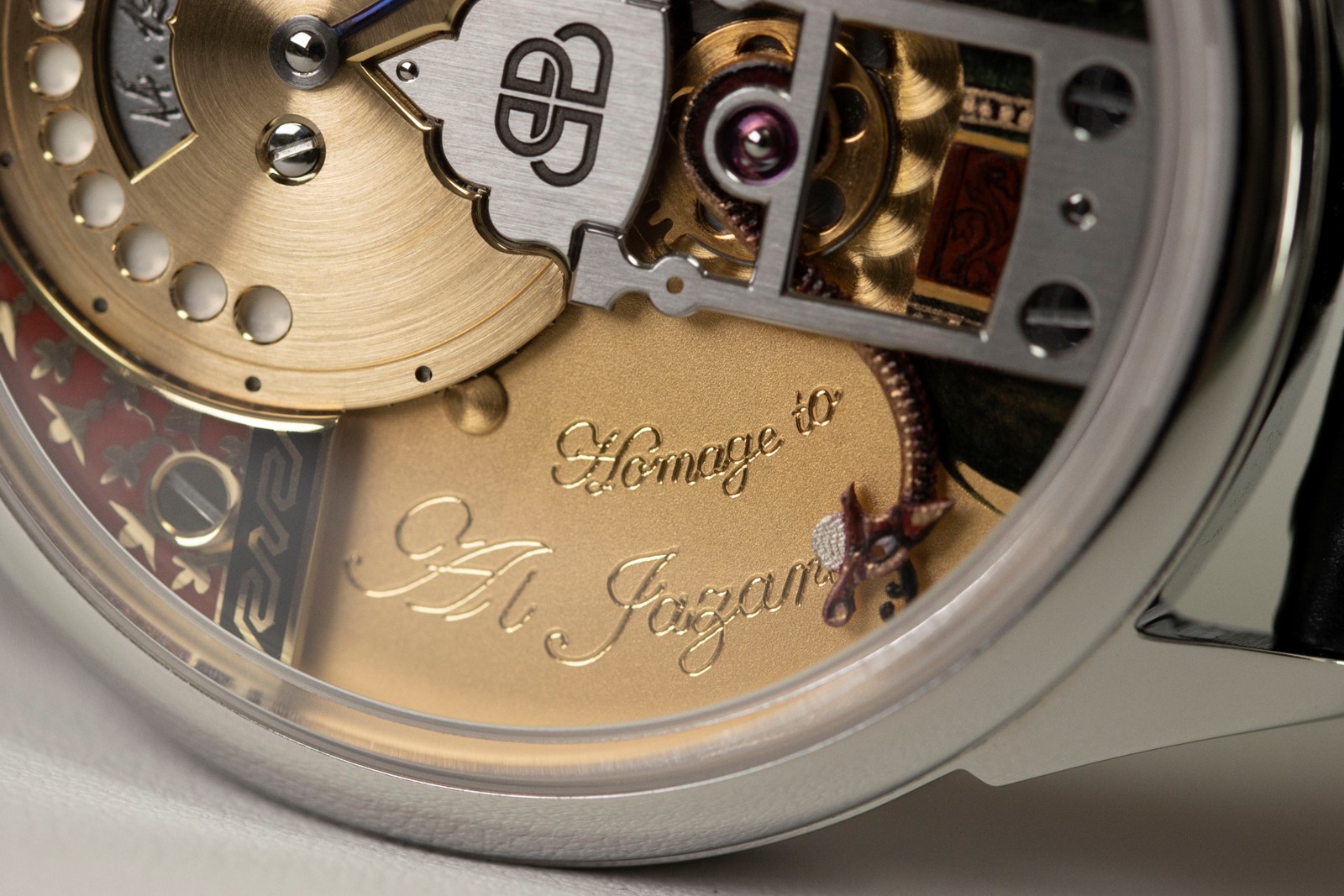 The dial has much going on, despite it being a time-only watch without even a seconds. The sub-dial at 12 o’clock contains the entirety of the time indication, while the rest of the dial is related to the automata.

A single blued hand indicates the minutes as on a conventional watch. Visible through a small window just under 12 o’clock is a 24-hour disc that indicates the hours.

Additionally, the periphery of the disc is fixed to a ring that indicates the day and night through a series of circular perforations on the dial. This mimics the time display of the Elephant Clock. 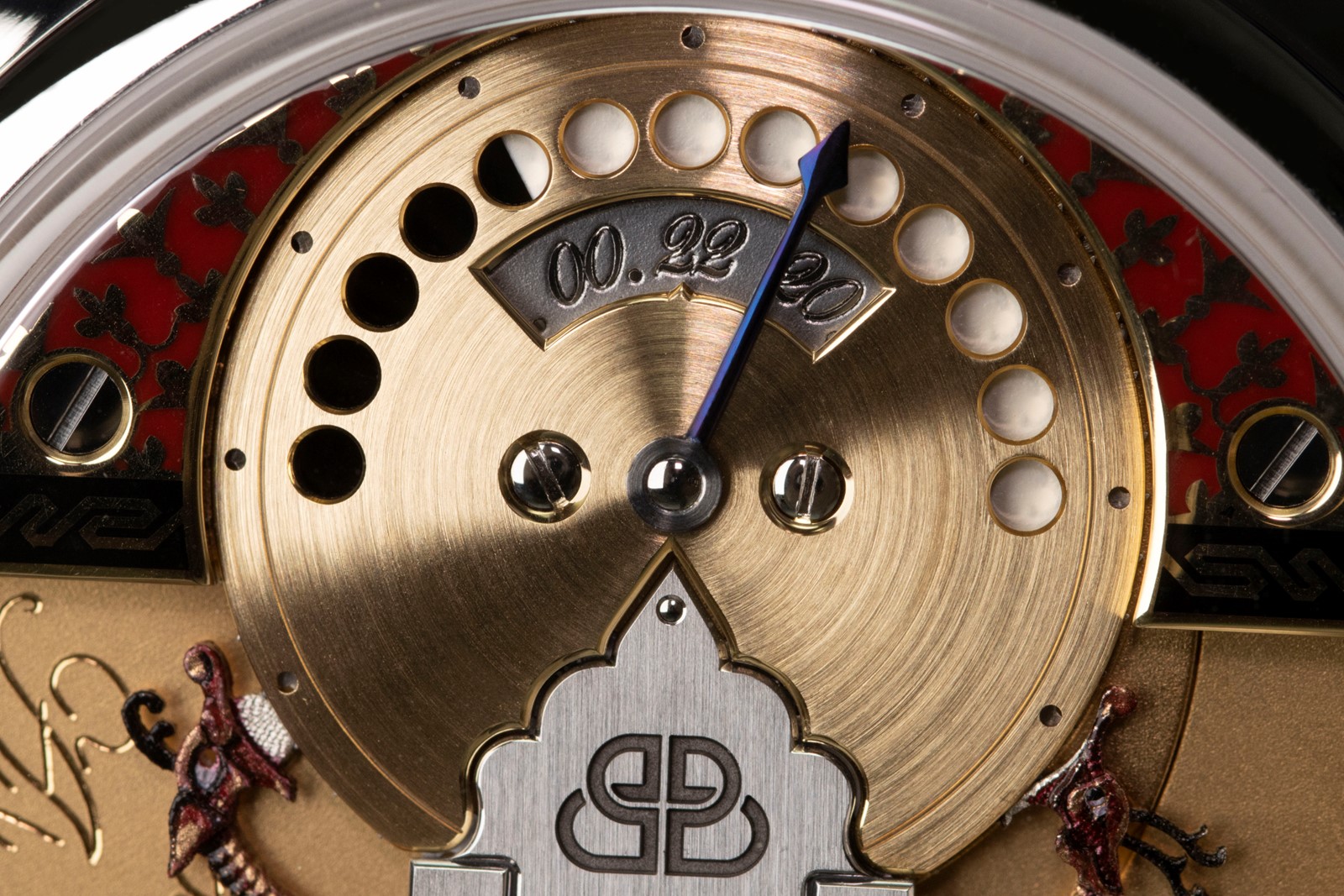 Like the clock, the watch has a half-hour jump mechanism. The hour disc jumps forward by half an hour, or 7.5°, every 30 minutes as the minute hand passes through the six or 12 o’clock positions.

Because of its unusual approach to telling the time, the watch is neither initiative nor easy to read, though it is certainly interesting. 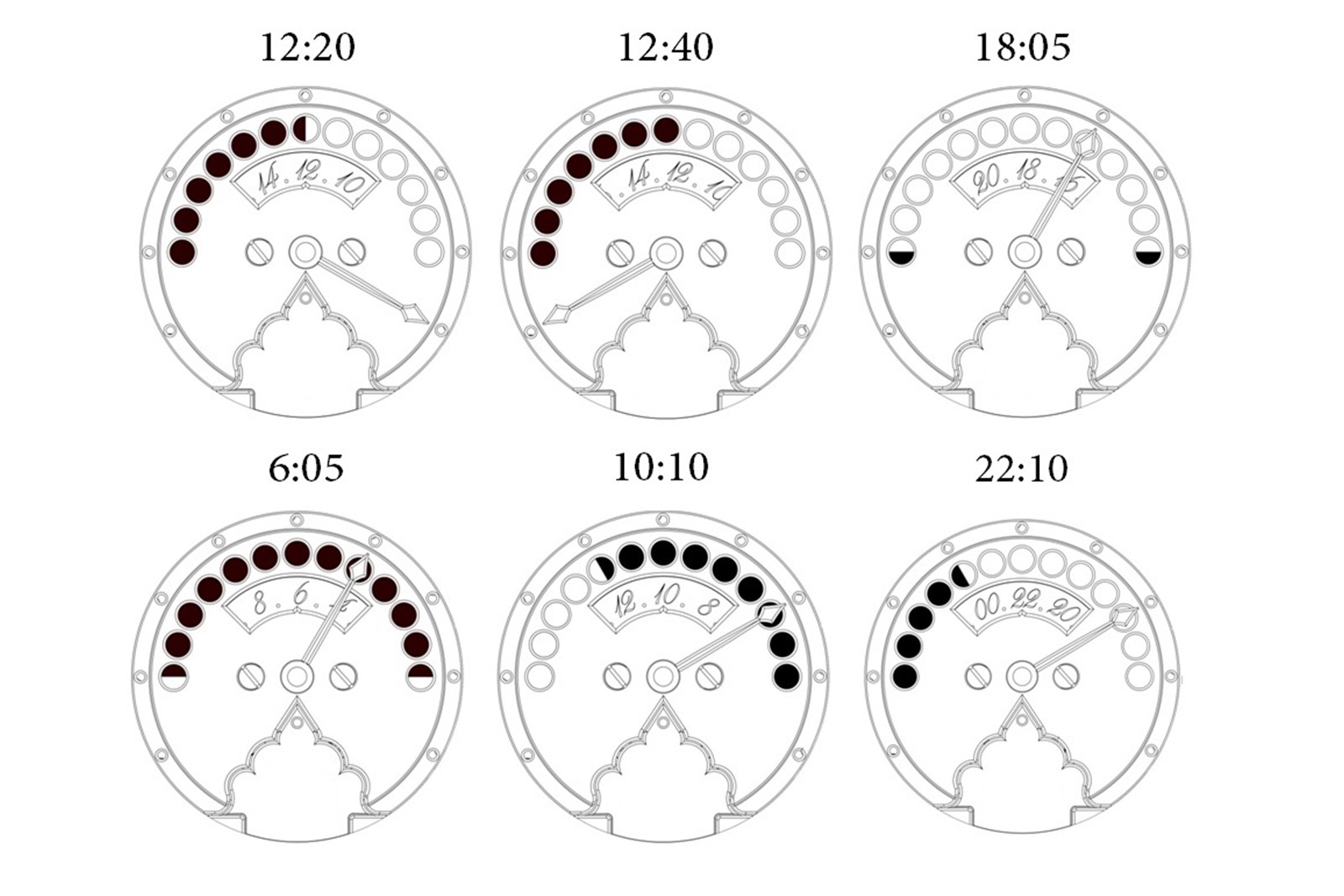 Reading the time takes some getting used to

The time display works in tandem with the automata, presented in the form of twin dragons. As time progresses, the dragon on the left slowly travels downward until it is released on the half-hour jump – whereby it jumps upwards to strike the sub-dial, creating the impression that the dragon’s head is advancing the day-night indicator one step forward.

Meanwhile, the dragon on the right is a decorative but functional element – it is actually a spring-loaded detent that holds the hour disc in place, and can observed moving for a split-second during the half-hour jumps. The bottom half of the watch contains a steel bridge which represents the howdah, or carriage, found on the clock. The bridges reveals the retrograde mechanism driving the dragon automata.

Notably, the steel bridge is finished by hand, with anglage that boasts inward and outward angles at the corners – the roof of the carriage is particularly well done in that respect. Just below the carriage and the dragons is a hand-painted elephant, completing the theme of the Homage. 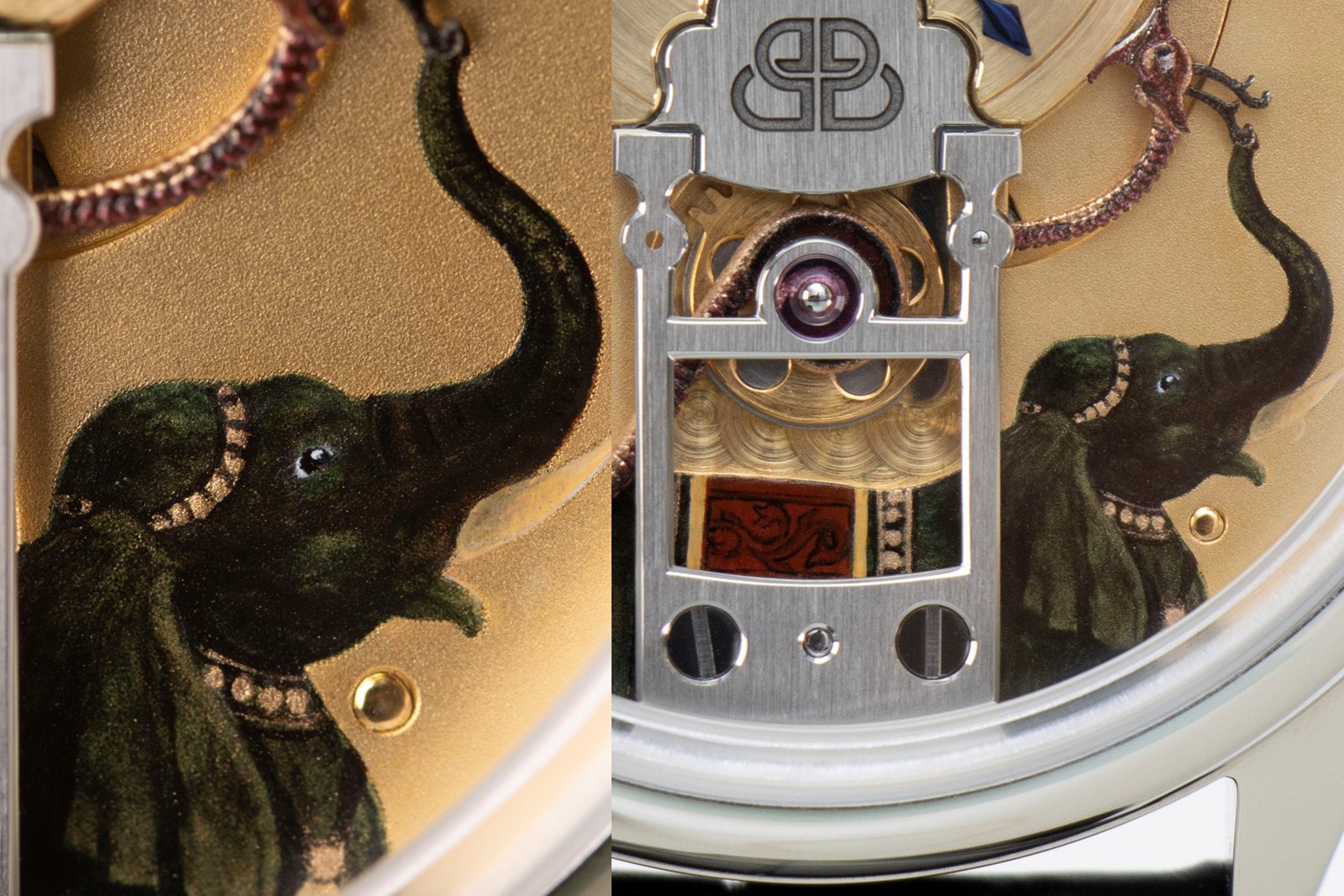 Notably, the entire movement is covered by a full bridge that exposes only the balance wheel. This serves as a canvas for a hand-painted reproduction of a painting of the Elephant Clock found in the 12th century Book of Knowledge of Ingenious Mechanical Devices penned by Al-Jazari. The movement with its full plate before painting The movement plate with a miniature painting of the Elephant Clock