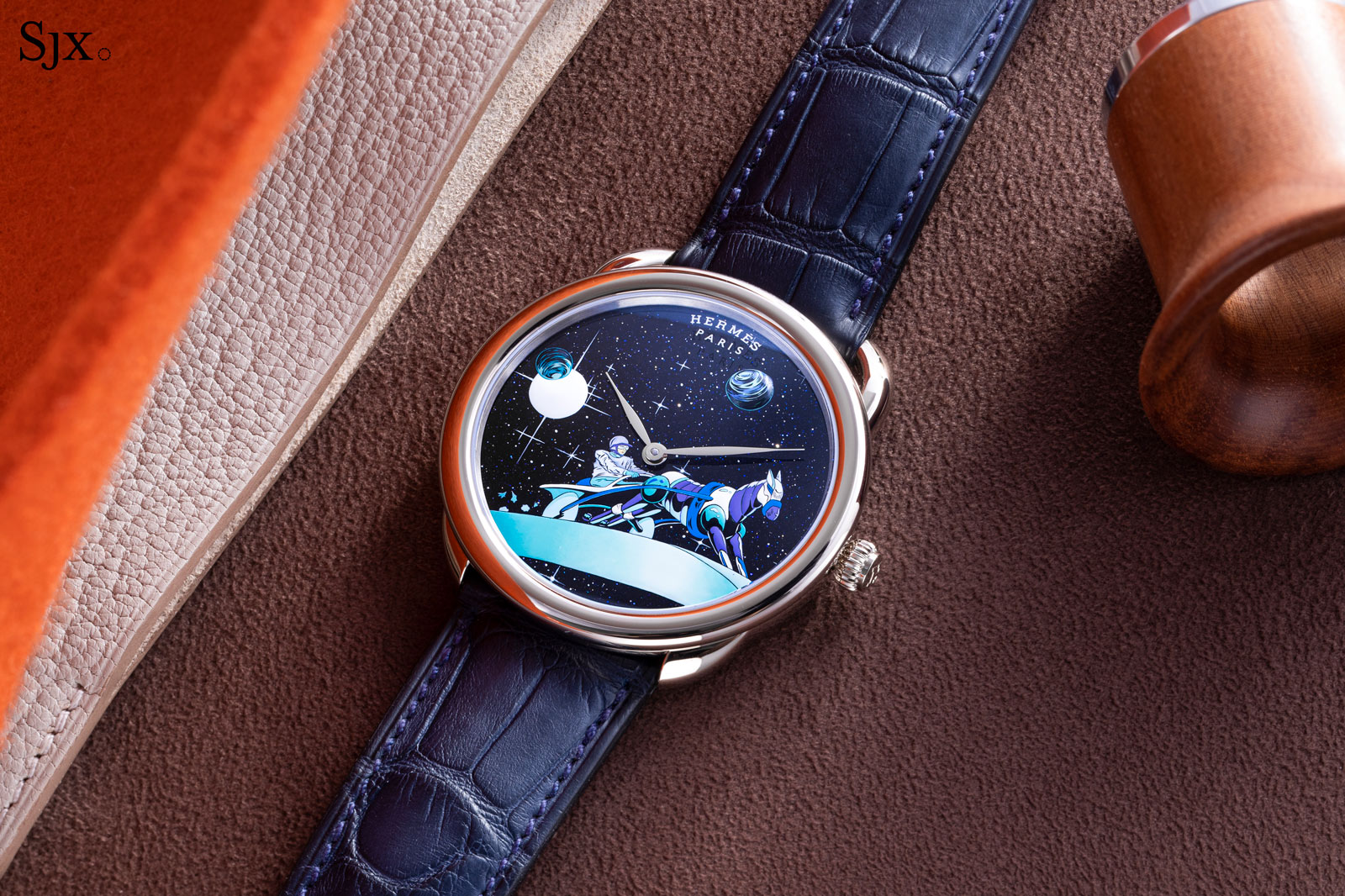 Unveiled last year as part of Hermes’ annual collection of metiers d’art watches, the Arceau Space Derby is typical Hermes with its equestrian motif, but also strikingly different since the dial depicts a jockey riding a robot horse past planets and stars.

The Space Derby is actually a pair of watches, a smaller one for ladies with the dial in pink opaline glass, and a larger model for men with an aventurine glass dial that is detailed below. But both have a similar motif on the dial that was taken from an Hermes scarf designed by French filmmaker and cartoonist Ugo Bienvenu. Hermes adapts many of its most famous scarves for metiers d’art watches. Most of the resulting dials are whimsical and subtle in a manner typical of the brand.

And Hermes does more of such watches, both in terms of range as well as number, than its immediate rivals Louis Vuitton and Chanel. The diversity of its offerings with artisanal dials is impressive in both style and technique – though horses, big cats, and birds are recurring themes – but even so the Space Derby is unique.

While the theme of the Space Derby is still equestrian, it is has a pop art aspect that sets it apart from the usual metiers d’art fare from Hermes. So it’s still recognisably an Hermes watches, but a bit more funky and very much different. 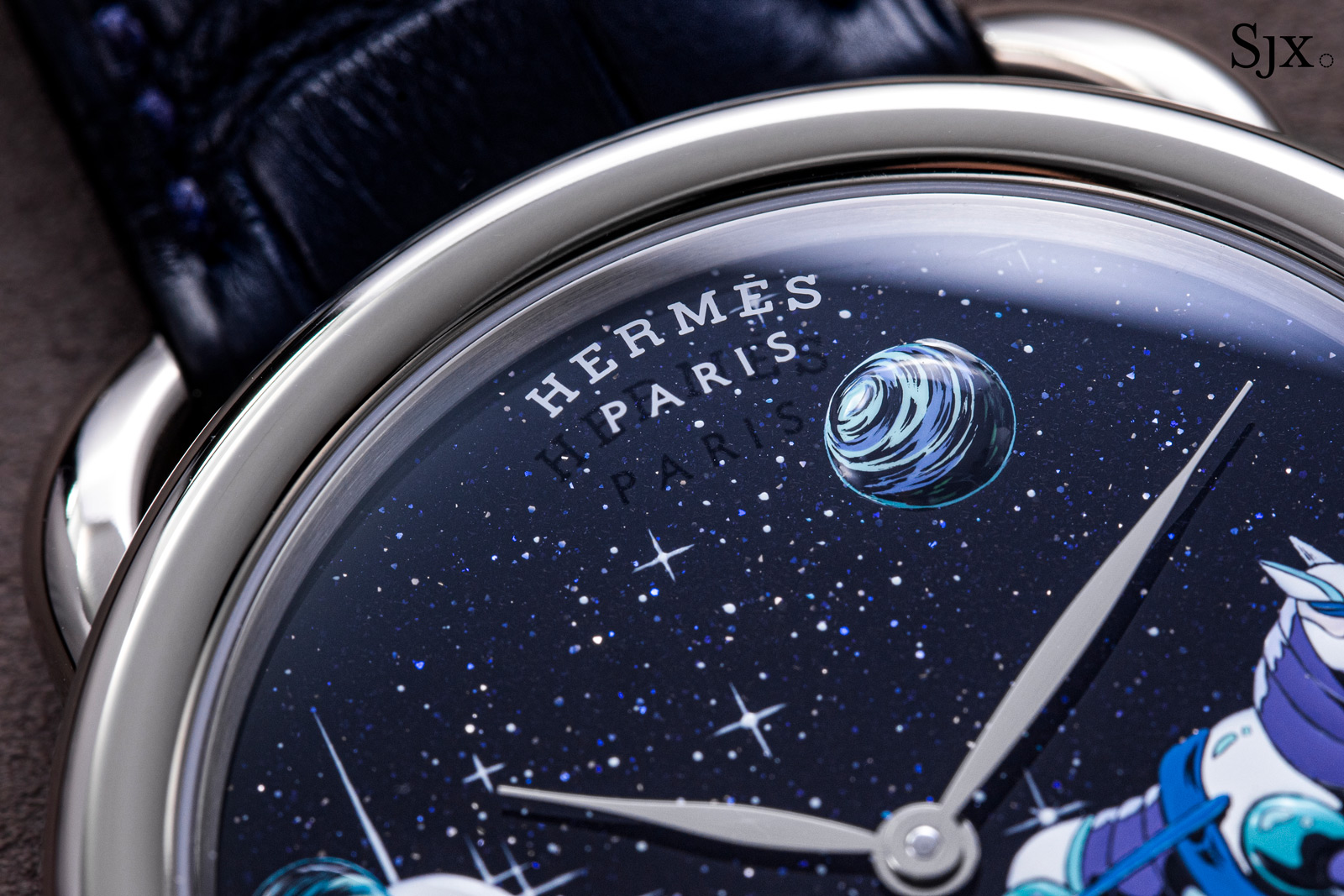 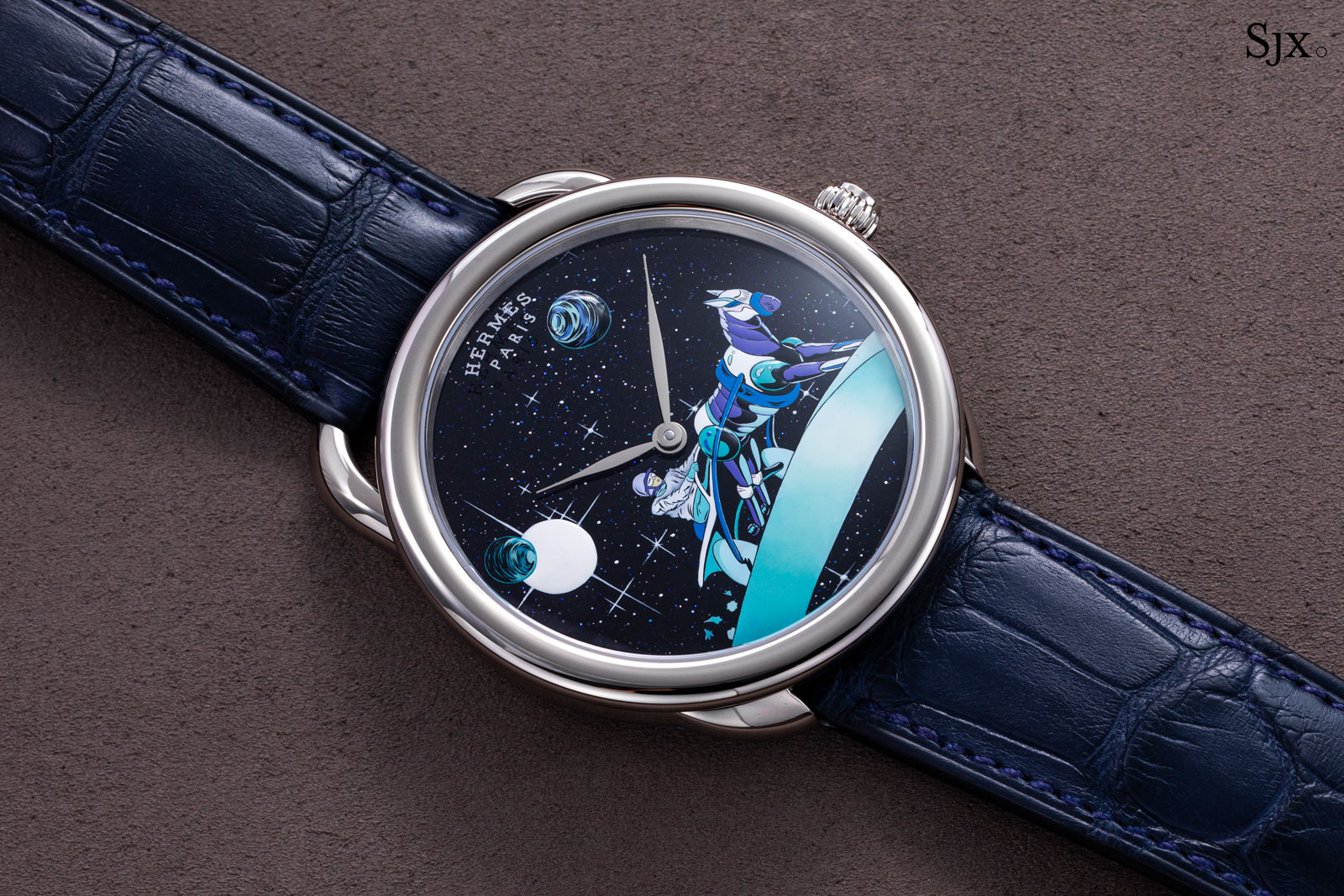 But the Space Derby is more than just a fancy dial. As is increasingly the case with fashion and leather goods brands, it is equipped with a respectable movement, thanks to Hermes’ quarter stake in Vaucher Manufacture, the movement maker that’s a sister company of Parmigiani.

No doubt because Hermes is a shareholder, Vaucher customises the calibres significantly, with the repeating “H” pattern stamped on both the bridges and rotor. While such a motif can be too much on clothing or bags, it is a discreet feature on a watch, since it’s only visible on the back.

It’s a refreshing change from the usual striping, and appropriate since a watch like the Space Derby is all about the art on the dial and not the movement. 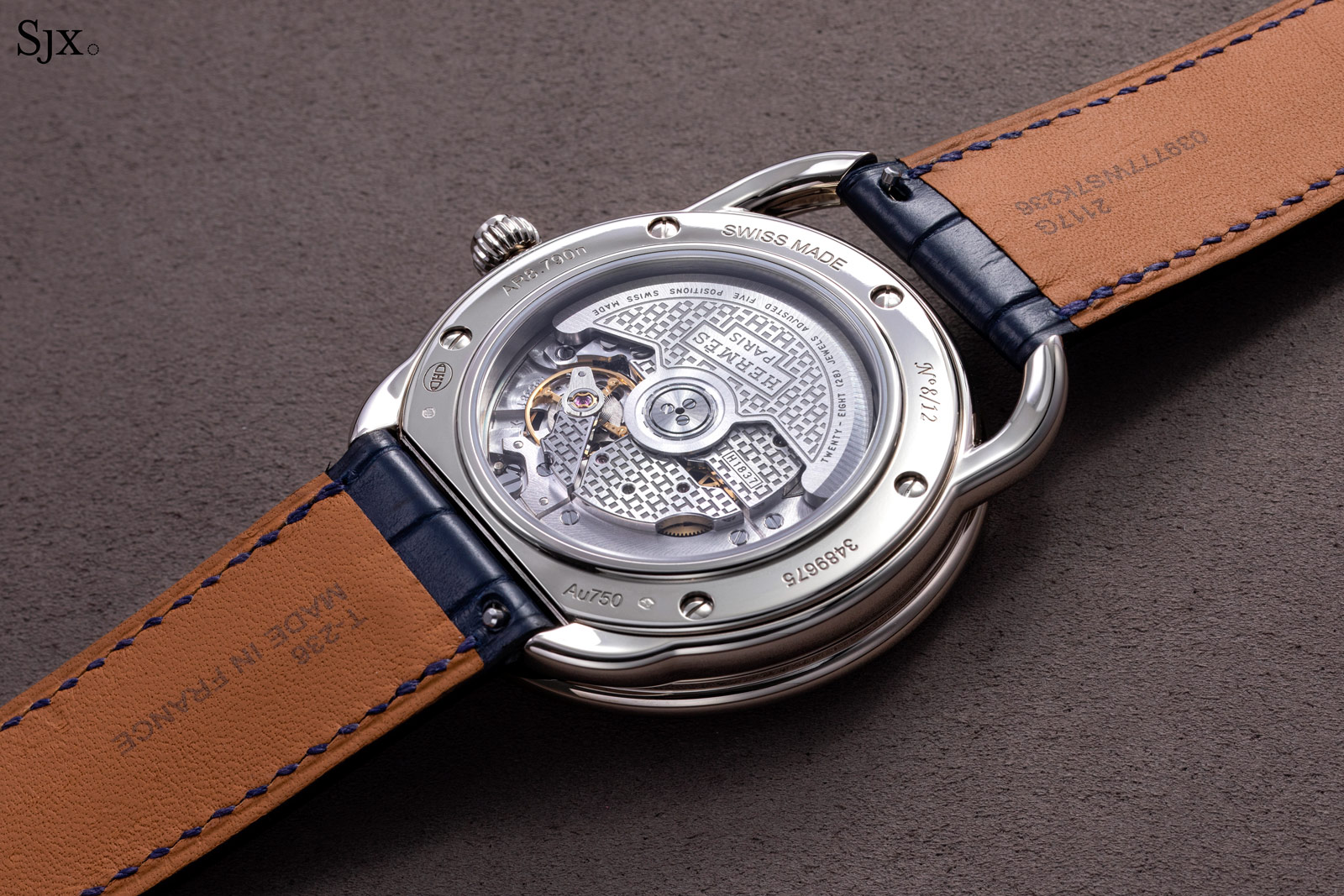 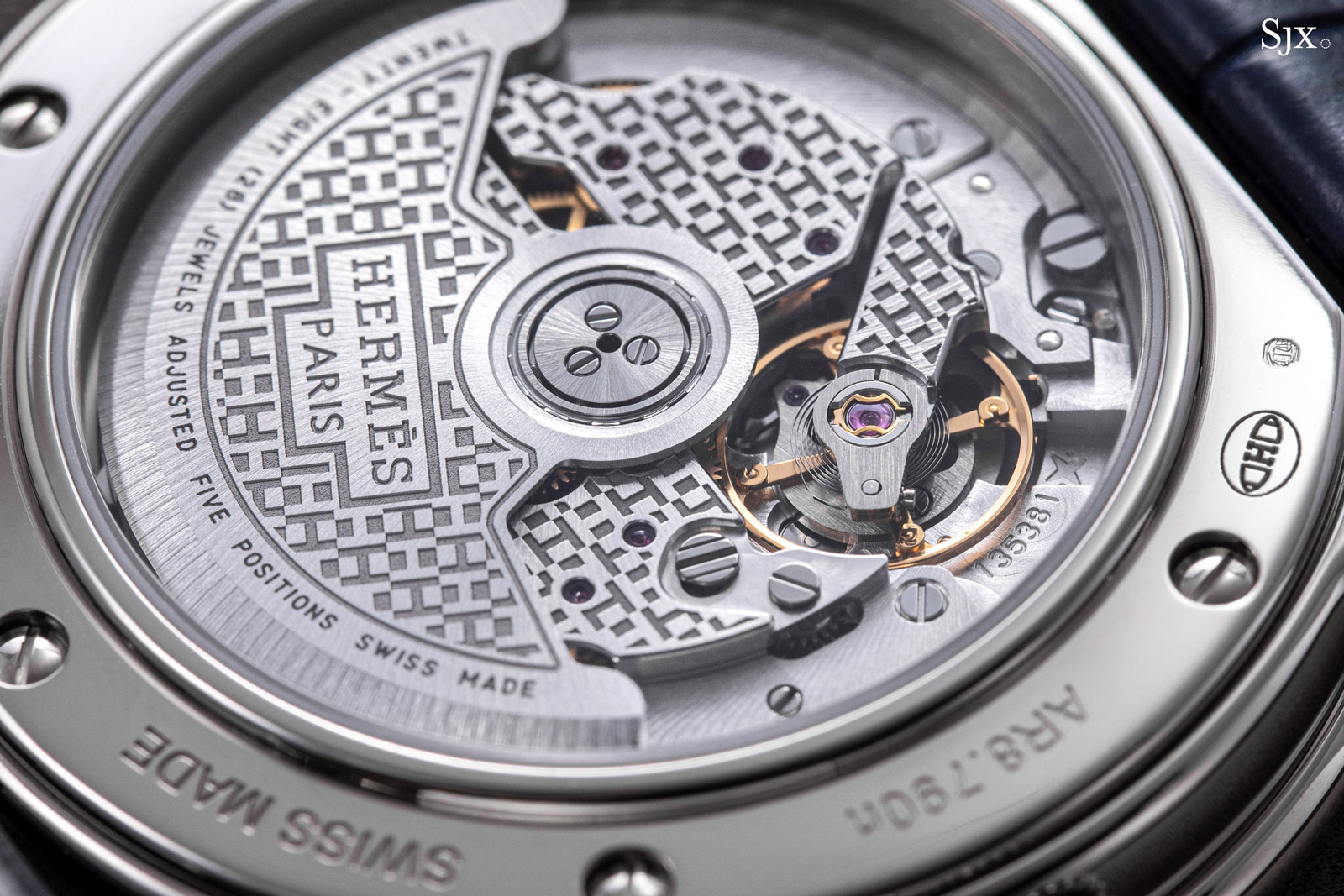 And another point of appeal is the price. It’s a hefty US$65,000 or so, but that’s more affordable than its enamel counterparts. That’s because the miniature painting on the dial is rendered in acrylic paint instead of fired enamel. A watch with a miniature enamel dial would be twice as much. 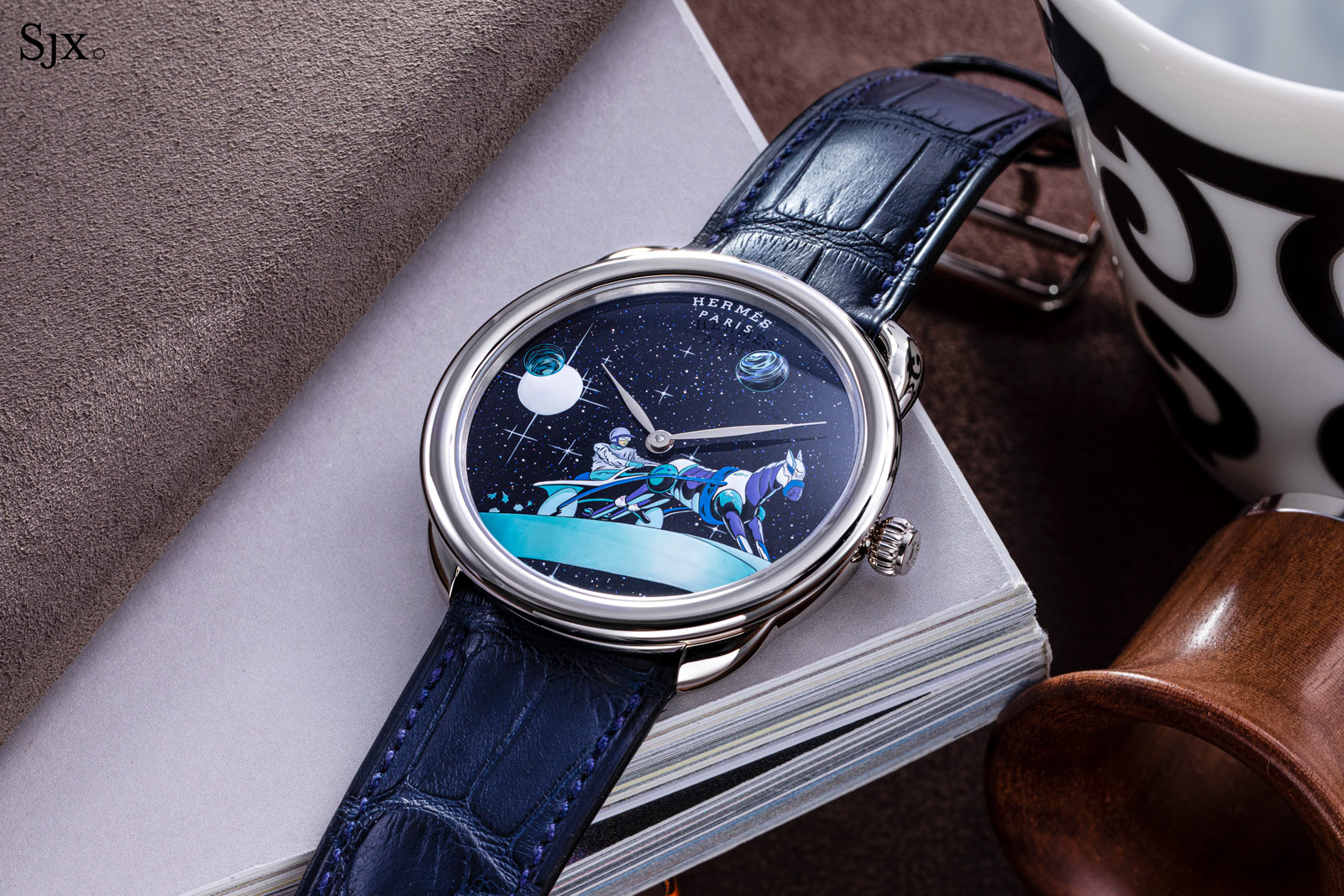 According to Hermes, the designer Mr Bienvenu was inspired by mid-20th century American comics. The Space Derby scarf he designed depicts six jockeys racing across the stars.

The pair of Space Derby watches each reproduces a section of the scarf: the ladies’ watch bears the female jockey in the foreground, while the men’s watch depicts the male jockey just behind. 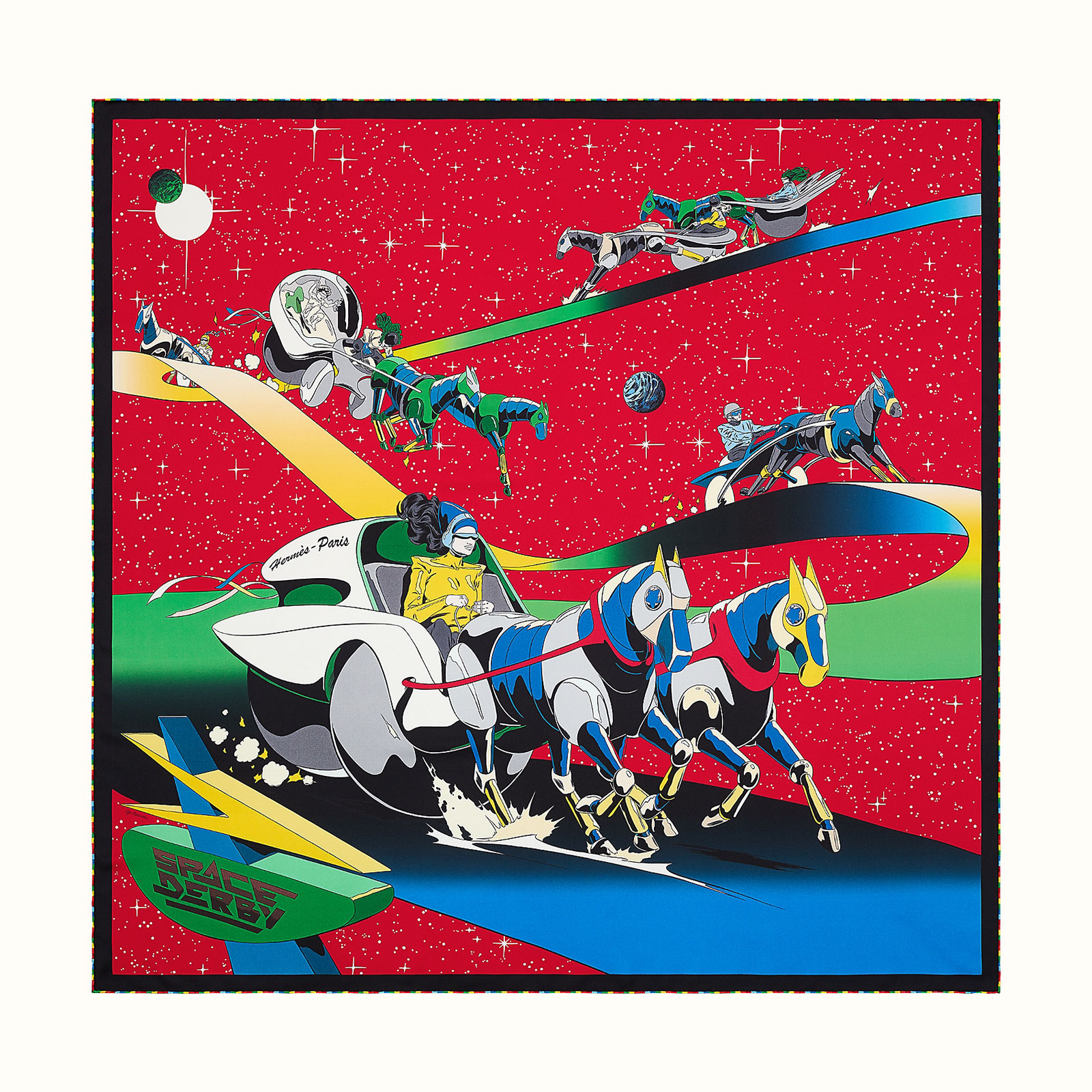 Mr Bienvenu’s illustration for the scarf captures vintage comics in both style and colour. Like the scarf, the Space Derby watch is available in several colour combinations, although the ladies’ model is predominantly in pastel shades of pink and blue, while men’s version is done in darker colours.

While Hermes relies on a range of techniques for dial decoration, including wood marquetry and cloisonné enamel, the Space Derby features a hand-painted miniature in acrylic paint. 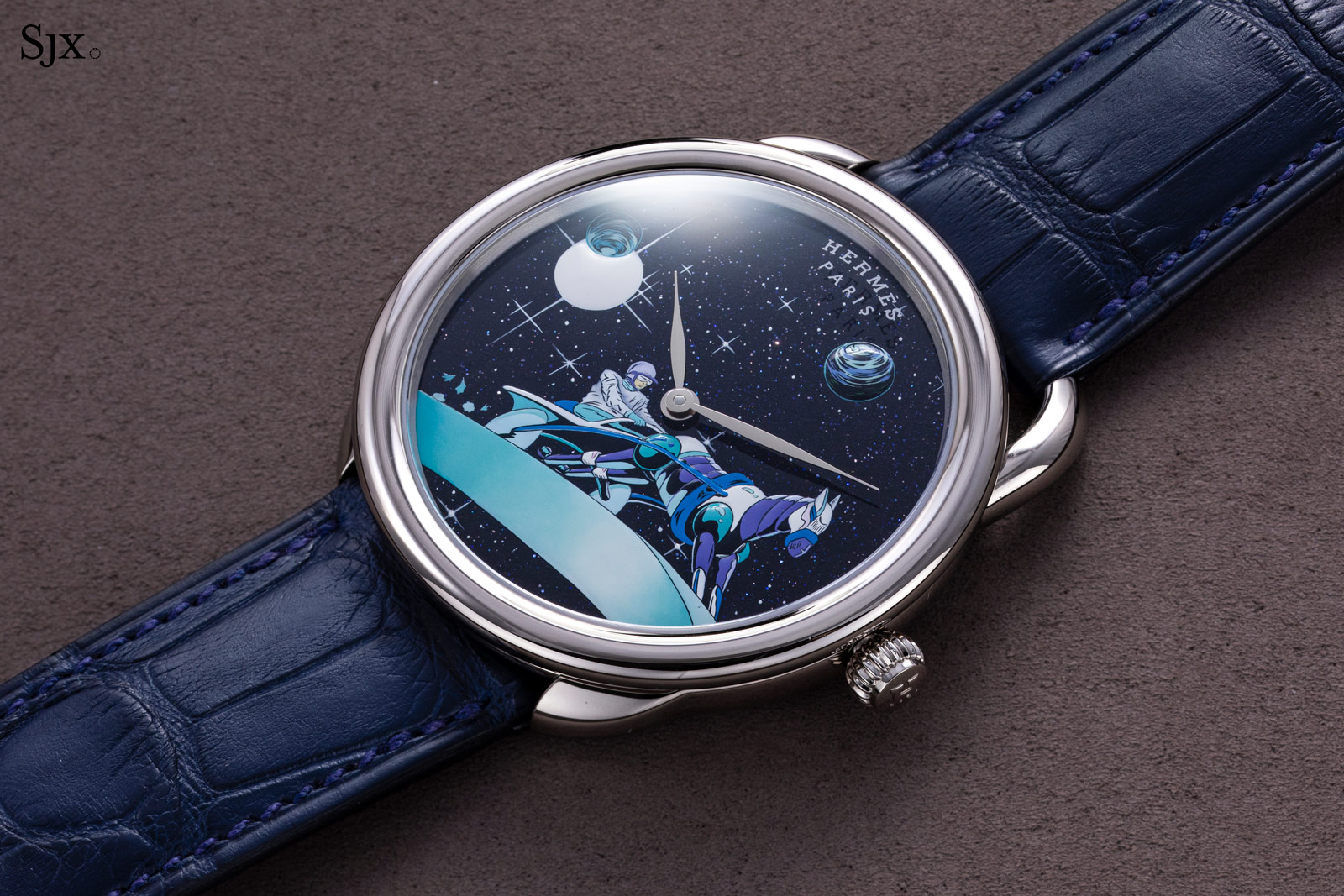 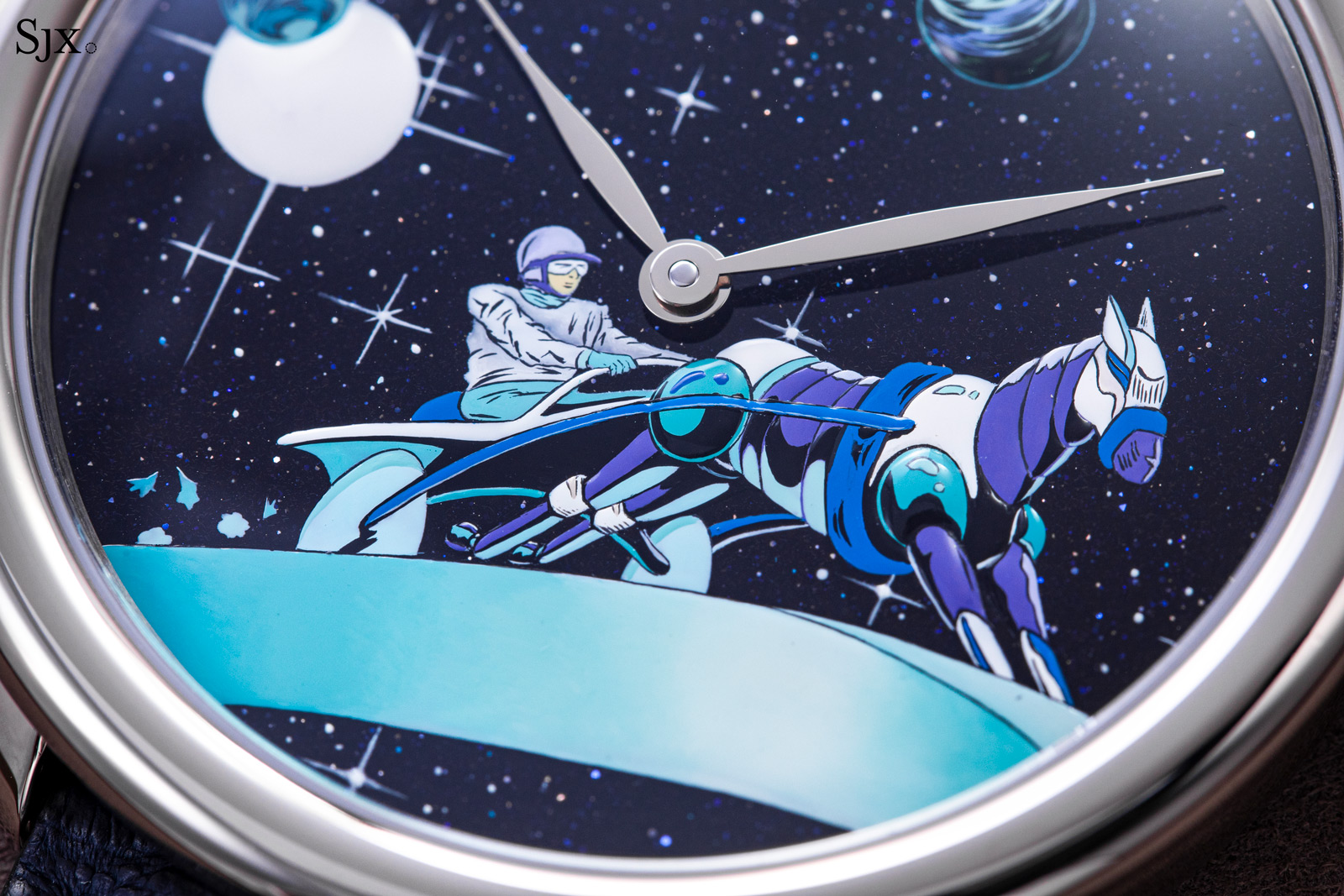 The base of the dial is aventurine glass, a type of glass with tiny metallic inclusions that give it a sparkly appearance. As a result, it’s the go-to material for evoking deep space or a night sky on a watch dial.

On the aventurine glass is the miniature painting done by Isabelle Villa, presumably an independent craftswomen like so many of the artisans who make dials for Hermes. According to the brand, the dial painting requires 40 hours of work – applying acrylic pain with a tiny brush and microscope and then baking in an oven to set the paint. The Hermes logo is printed on the underside of the crystal, leaving the entire dial as a canvas for the painting Despite the minute scale of the painting, the detail is impressive on both the jockey and horse. More notably, the brushstrokes of the painting evoke comic book drawings, which attest to Ms Villa’s ability to capture the feel of retro comics. And just as importantly, she also manages to create a metallic-looking appearance for the robot horse. 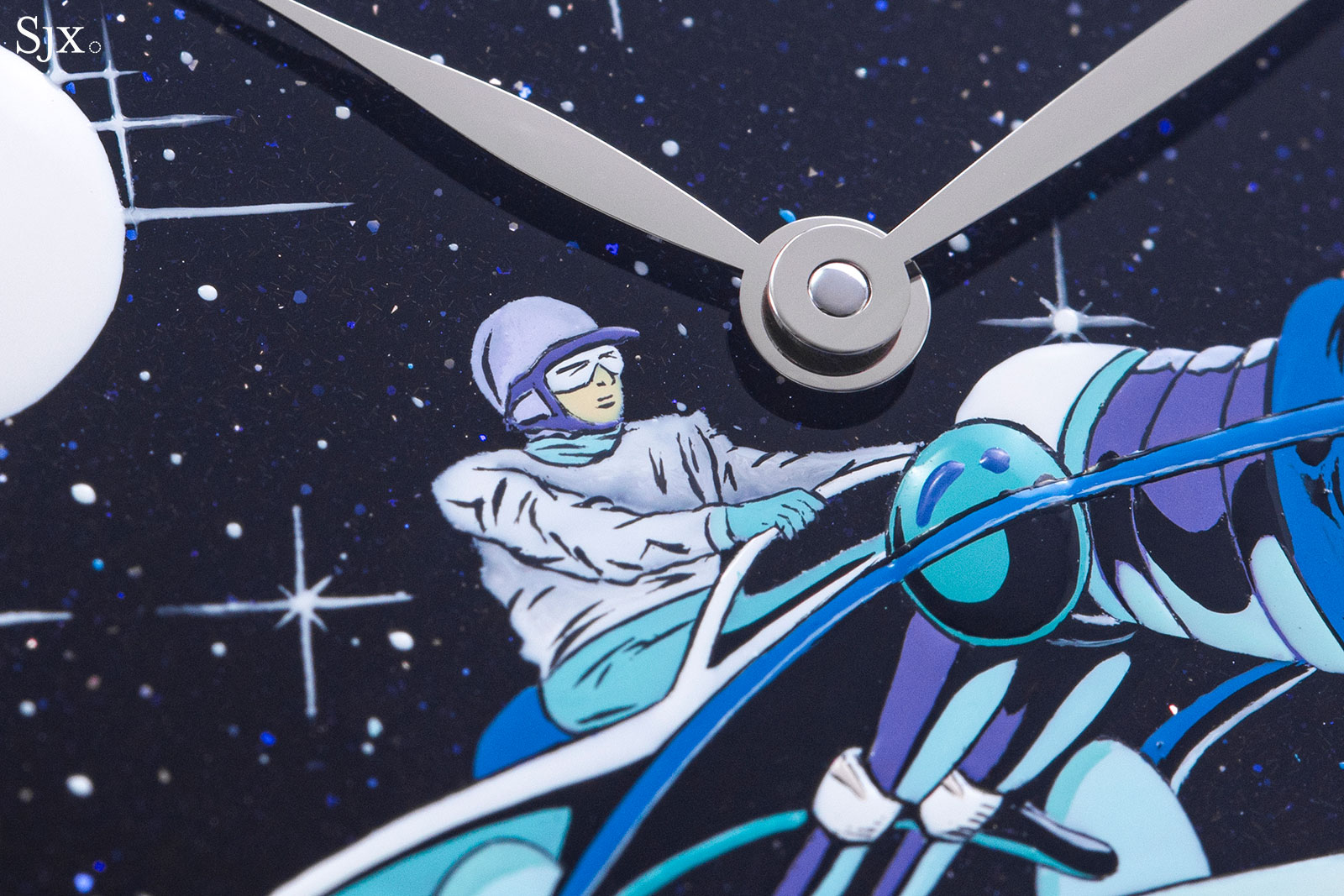 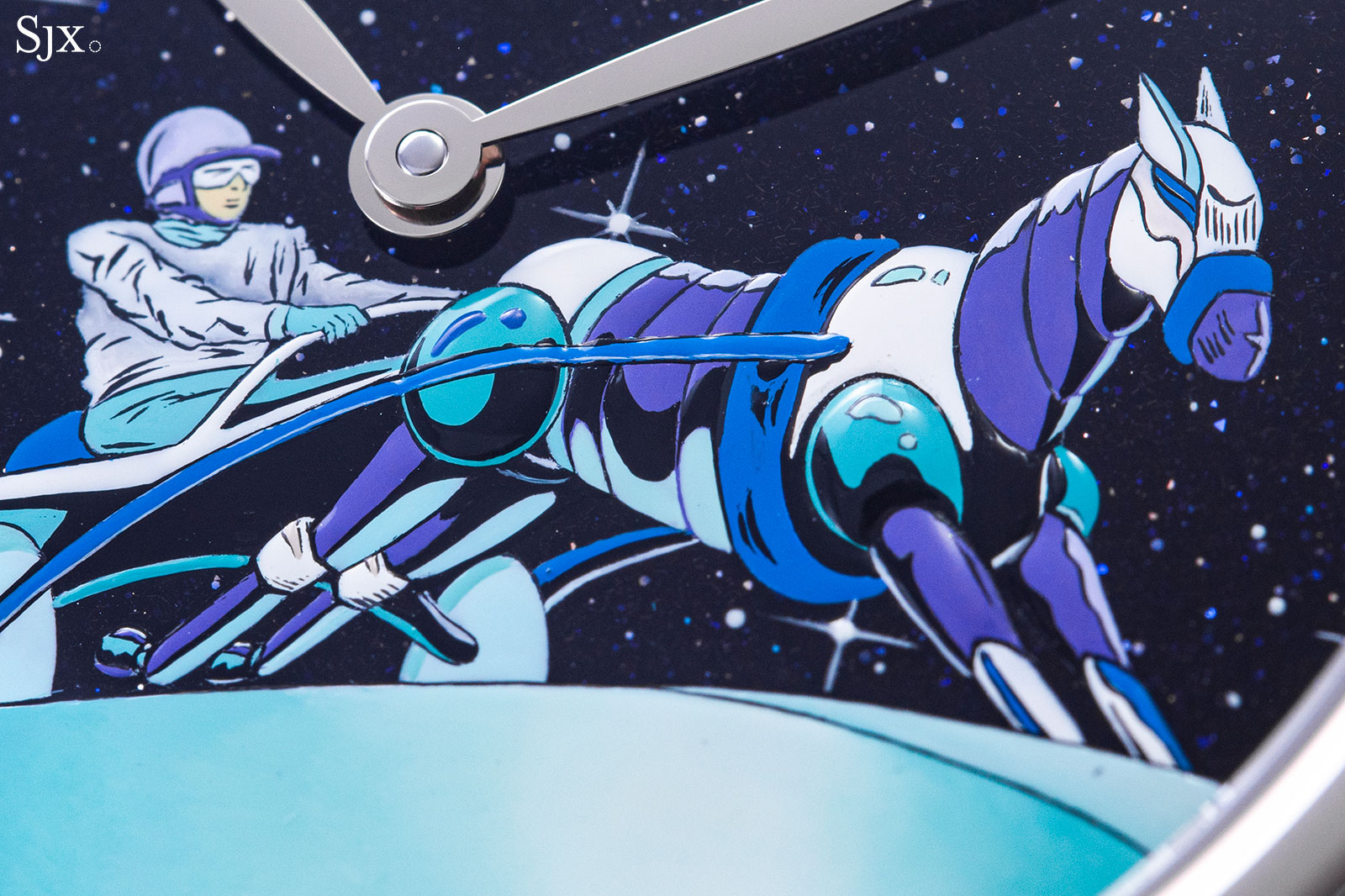 Perhaps the most distinctive classical design of Hermes, the Arceau is one of the brand’s longest-lived case styles. Inspired by a stirrup – explaining the asymmetrical lugs – the Arceau was designed in 1978 by Henri d’Origny, a veteran designer whose career at Hermes has spanned decades (and several watches, including the Cape Cod). It’s a simple circular form, but made interesting with the large, arched lugs on the top that contrast against the tiny, stubby lugs below. The case is 18k white gold and a largish 41 mm in diameter. While the case is not oversized, it feels thicker than it actually is, which is often the case for the Arceau, likely due to the tall, convex bezel.

That effect isn’t too pronounced on the Space Derby since it is relatively thin, but on complicated Arceau models the case height feels substantial. The Arceau L’Heure De La Lune, for instance, is almost 14 mm high but feels even thicker. 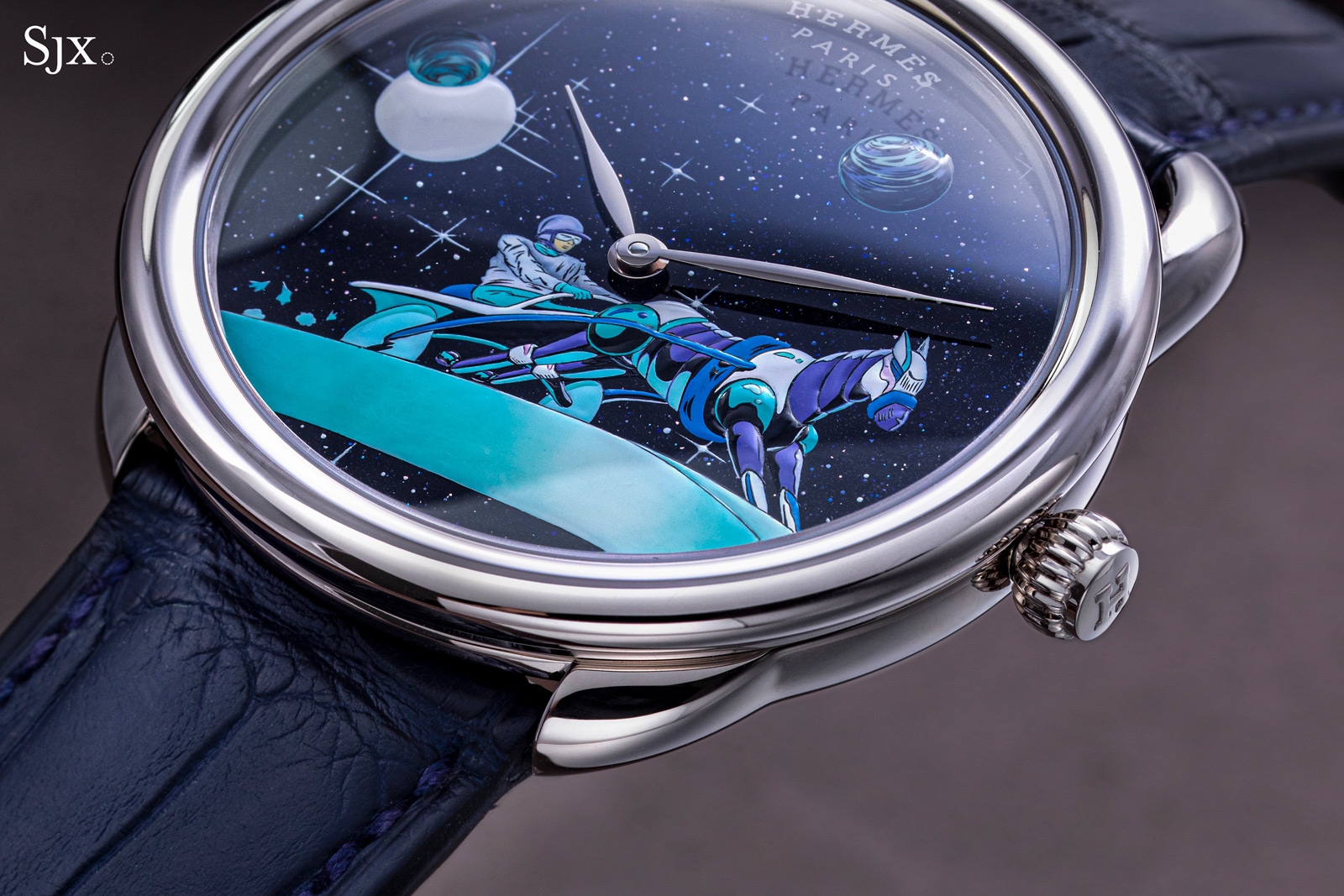 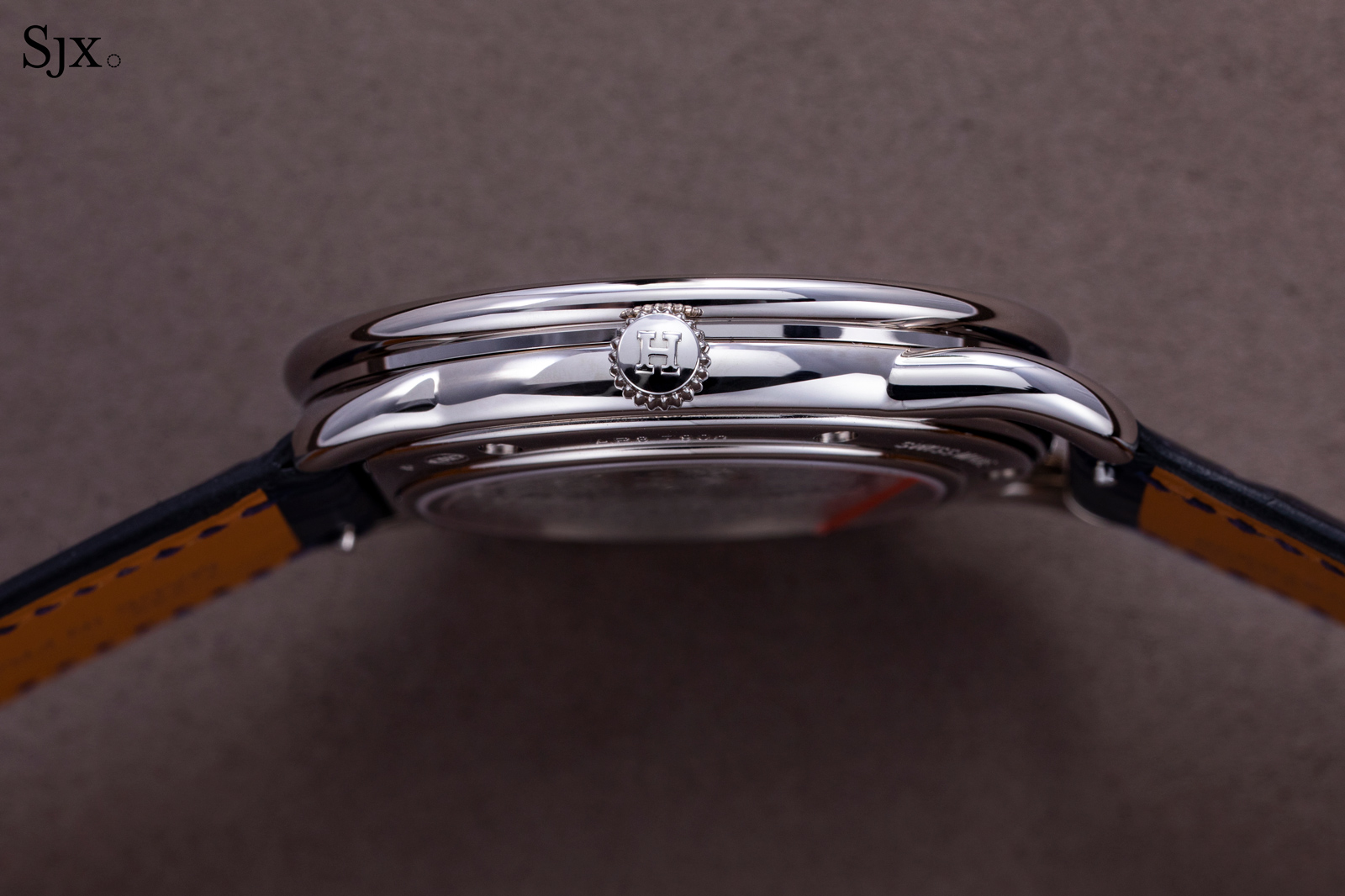 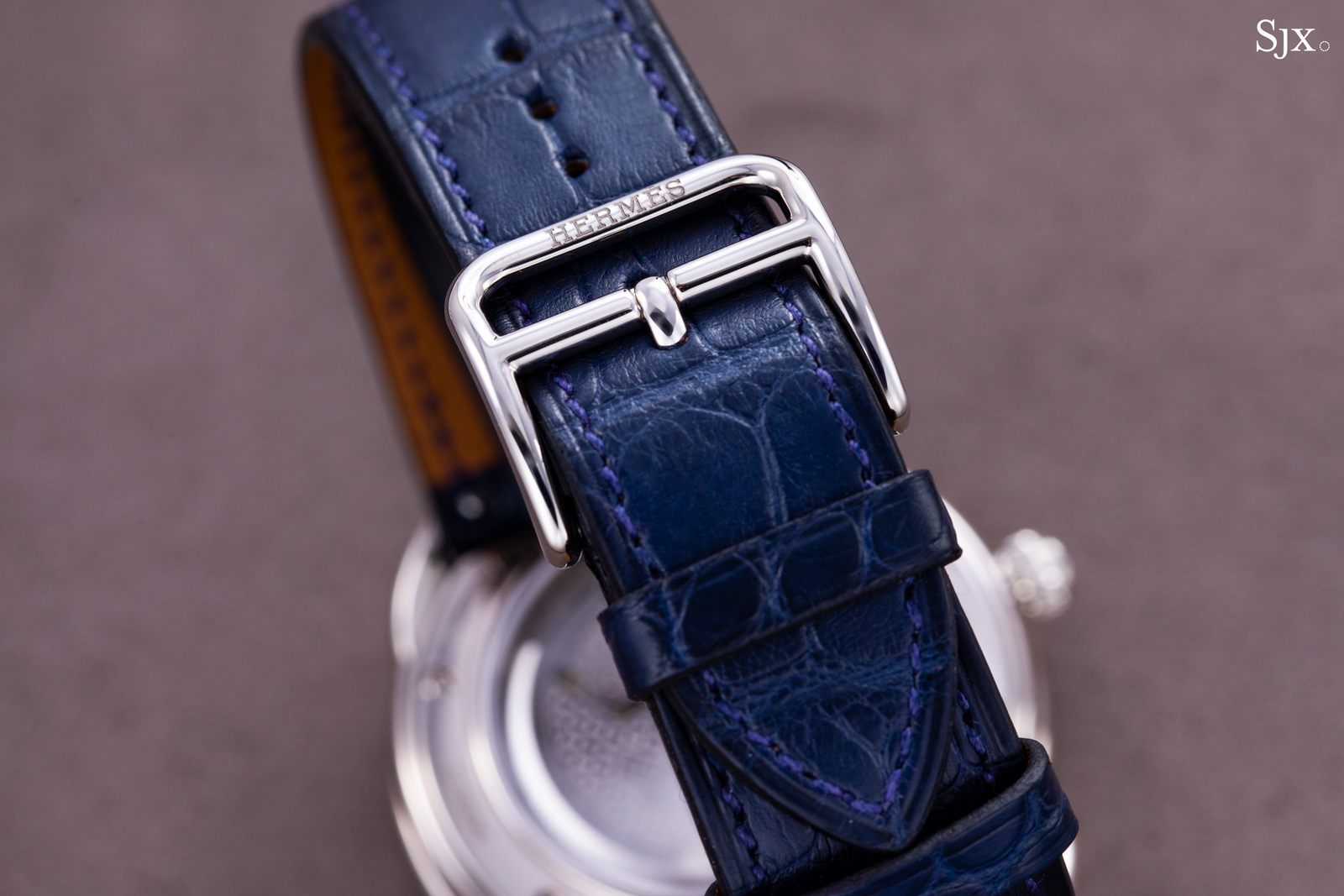 The clasp is obviously Hermes in design, while the straps are clearly Hermes in terms of quality

The H1837 inside is based on the Vaucher VMF 3002, a relatively thin movement with a full rotor (unlike Vaucher’s micro-rotor movement that is even slimmer). It’s comparable to the ETA 2892 in thickness and width, but the H1837 is certainly more refined. Amongst its more obvious refinements is the free-sprung balance. 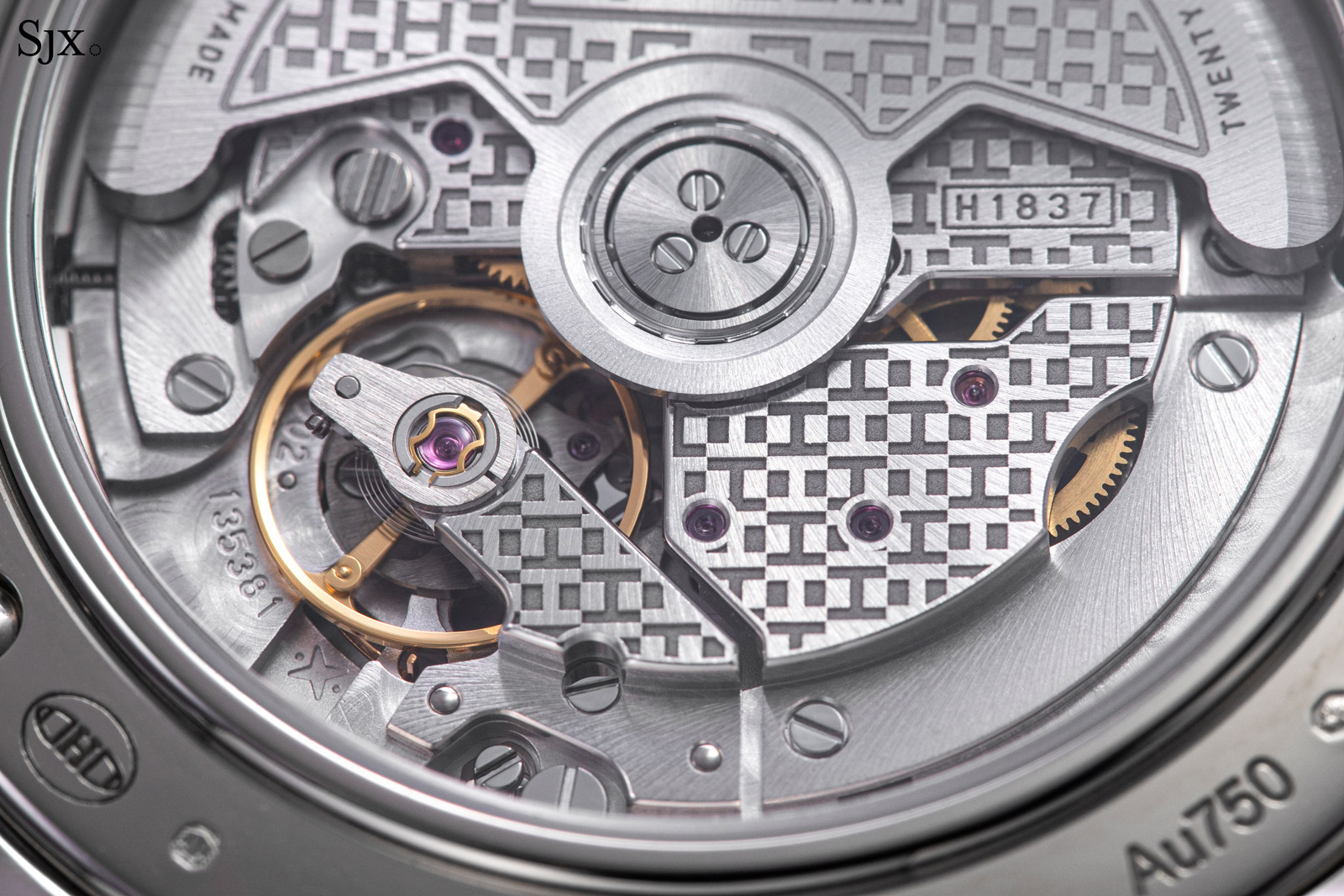 The balance has four arms, each with a regulating weight

Ideal for the watch, the decoration is visually attractive. It is clearly industrial in nature, but it is more interesting than striping or perlage, which would also be applied by machine in comparable movements.

Naturally, finishing that is artisanal would be superior, but that is not feasible considering the price, which is largely down to the dial, as is usually the case with metiers d’art watches. 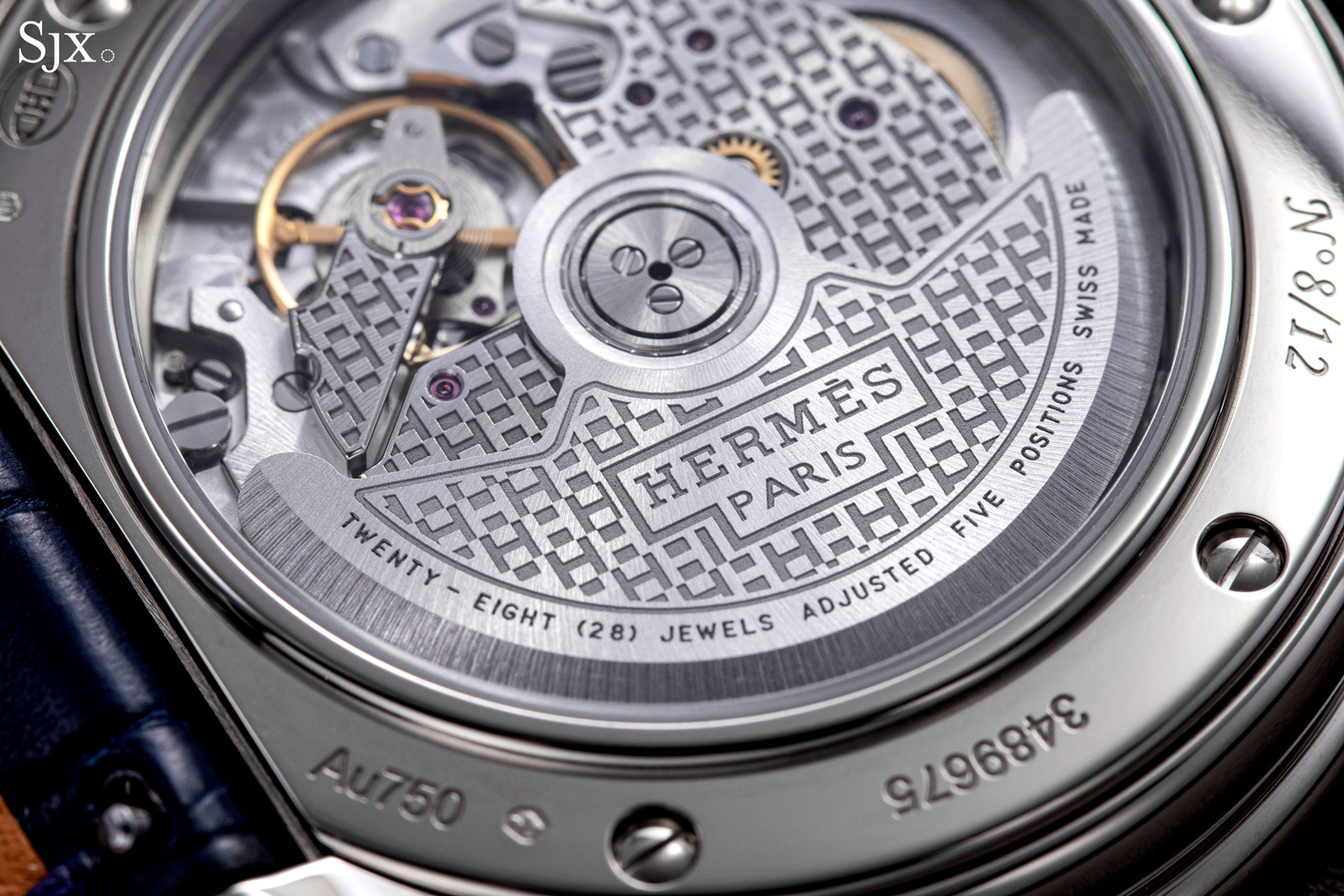 The bridges and rotor are stamped with the alternating “H” pattern The bridges have stamped bevelling and countersinks

Quirky yet elegant, the Space Derby encapsulates the house style of Hermes. It is appealing for what is it – a miniature painting that happens to tell the time.

Limited edition: 12 pieces
Availability: At Hermès boutiques
Price: Estimated to be CHF62,700; price to be confirmed at delivery

With the Arceau Space Derby.