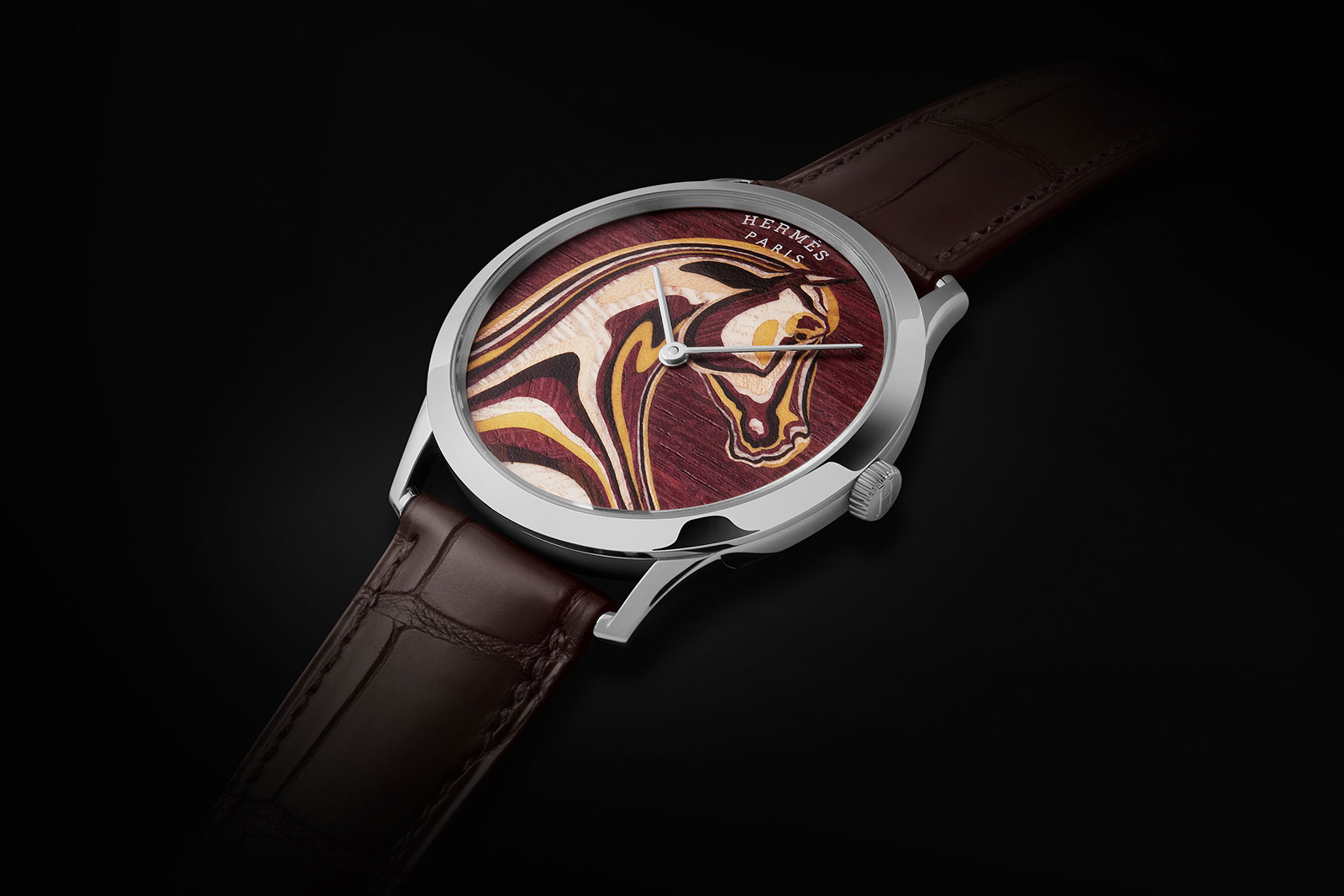 In its usual tasteful yet quirky style, Hermès has unveiled a pair of wristwatches featuring dials decorated in wood marquetry,  tiny pieces of exotic woods assembled like a puzzle to form striking, abstract motifs; last year Hermes did the same in leather.

Created by a young French marquetry artist, the dials start with a line drawing on tracing paper, which is then digitised and scaled down to the size of the dial. The reduced drawing is then printed out and cut into its component parts with a scalpel, forming the pattern for cutting.

Each piece is then glued to a thin slice of exotic wood that is then cut with a small electric fret saw. The resulting bits of wood are then assembled with a tweezer, and occasional gentle hammering, before the dials are sanded and varnished, making them seem like an unbroken whole.

Monochromatic yet intriguing enough to make you look twice, the Arceau Astrologie Nouvelle reproduces the pattern from the silk scarf of the same name. The original Astrologie scarf featured a classical star chart, but in 2012 designer Cyrille Diatkine reinterpreted the motif – nouvelle is French for “new” – breaking it up into alternating and inverted segments. 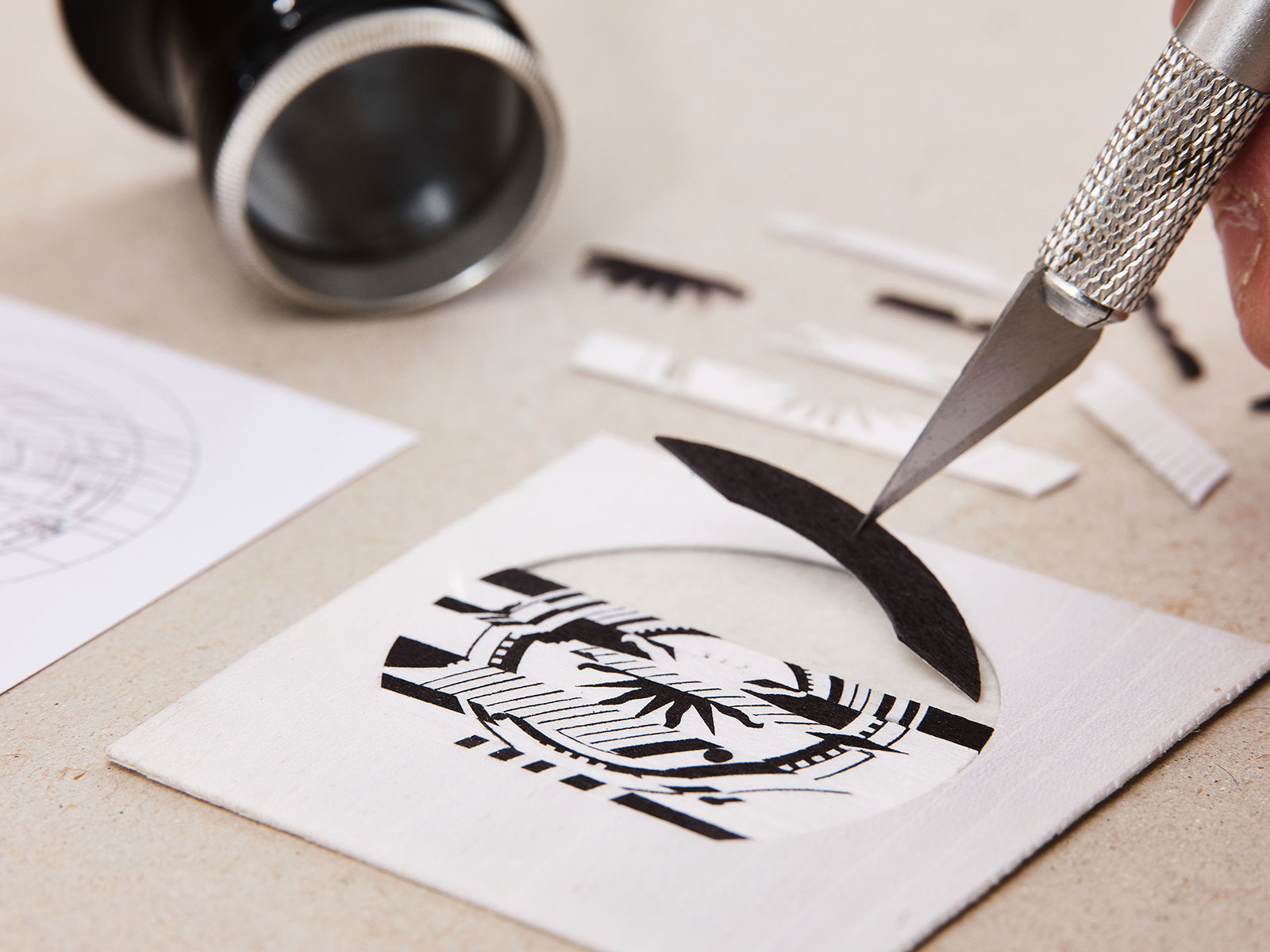 The Astrologie Nouvelle motif has been recreated using tulipwood, a wood that can vary in colour from white to dark blue according to Hermès, resulting in the contrasting colours of the dial.

Its case is 41mm and 18k white gold, containing the H1837 automatic made by Vaucher, a movement maker part owned by Hermes. 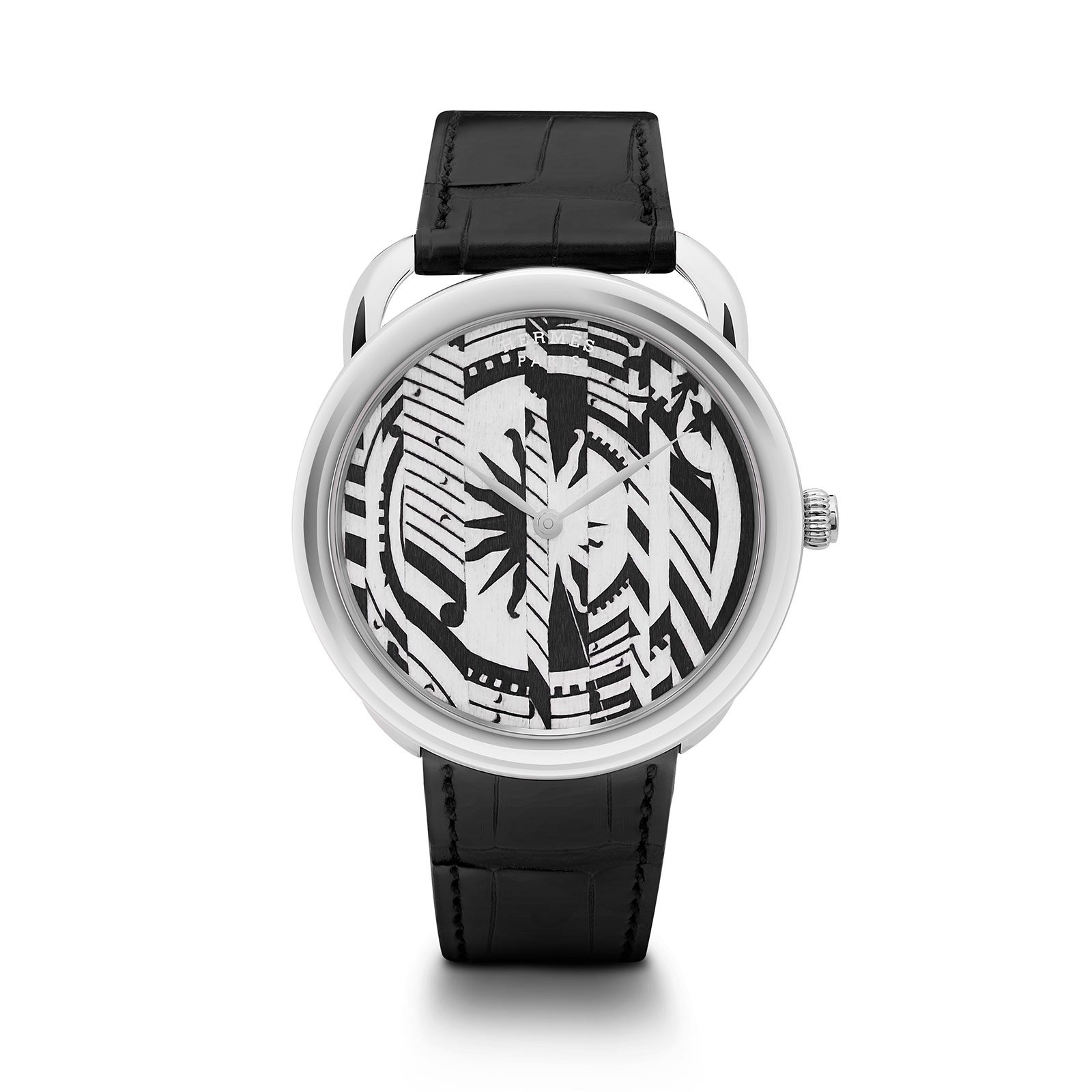 More figurative but simultaneously abstract is the Slim d’Hermès Pégase Paysage. Literally translating as “Pegasus landscape”, the motif is once again taken from an Hermes scarf. It depicts a bird’s eye view of a hilly terrain, with contour lines that form the outline of the horse’s head, at once a portrait and a landscape. 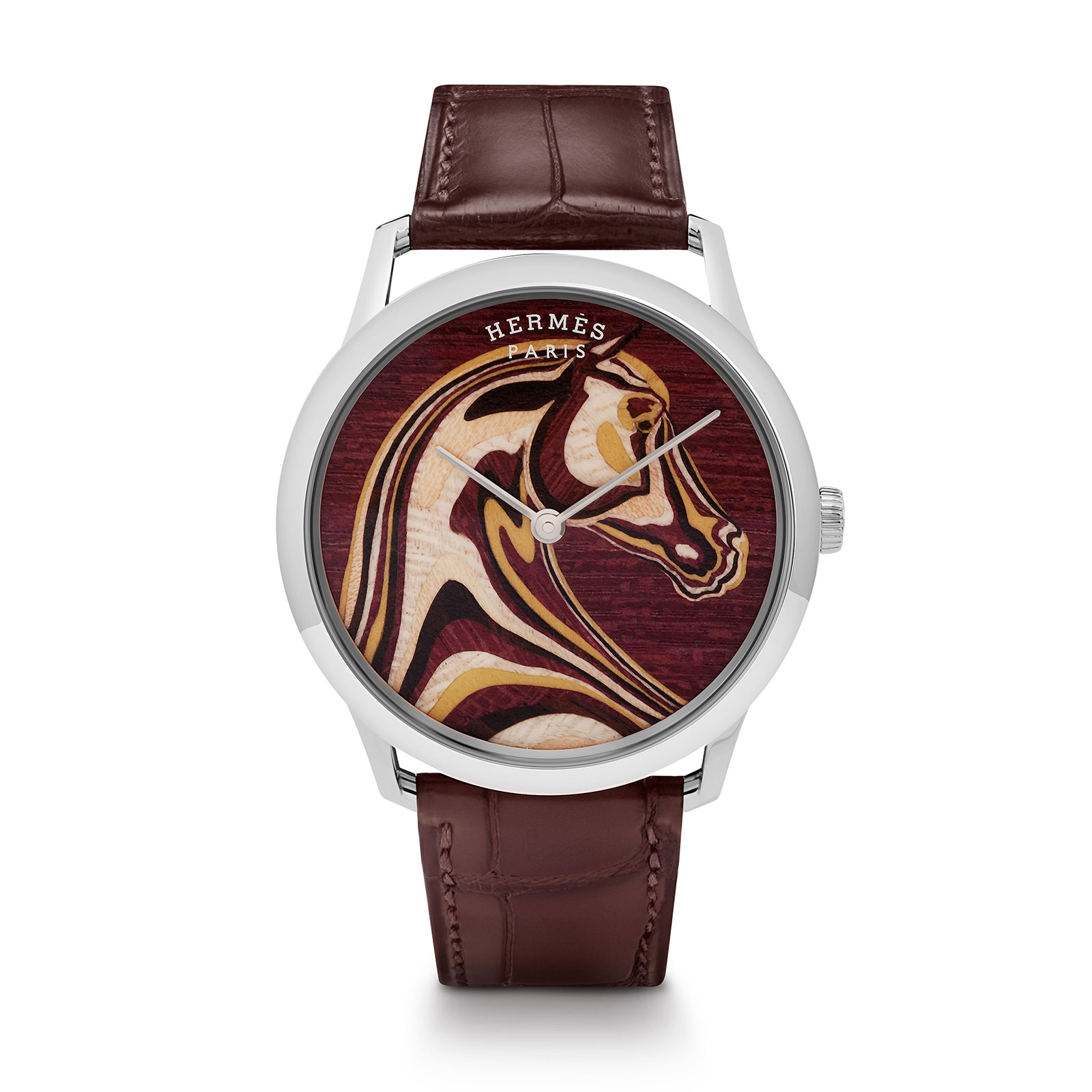 A mixture of woods was used to form the Pégase Paysage, including amaranth, ebony, chestnut and yellow pear, creating a motif that ranges in colour from black to brown to cream. The woods were selected not just for their colour, but also their grain, which ranges from pronounced to almost invisible, creating nuanced surface and shading. 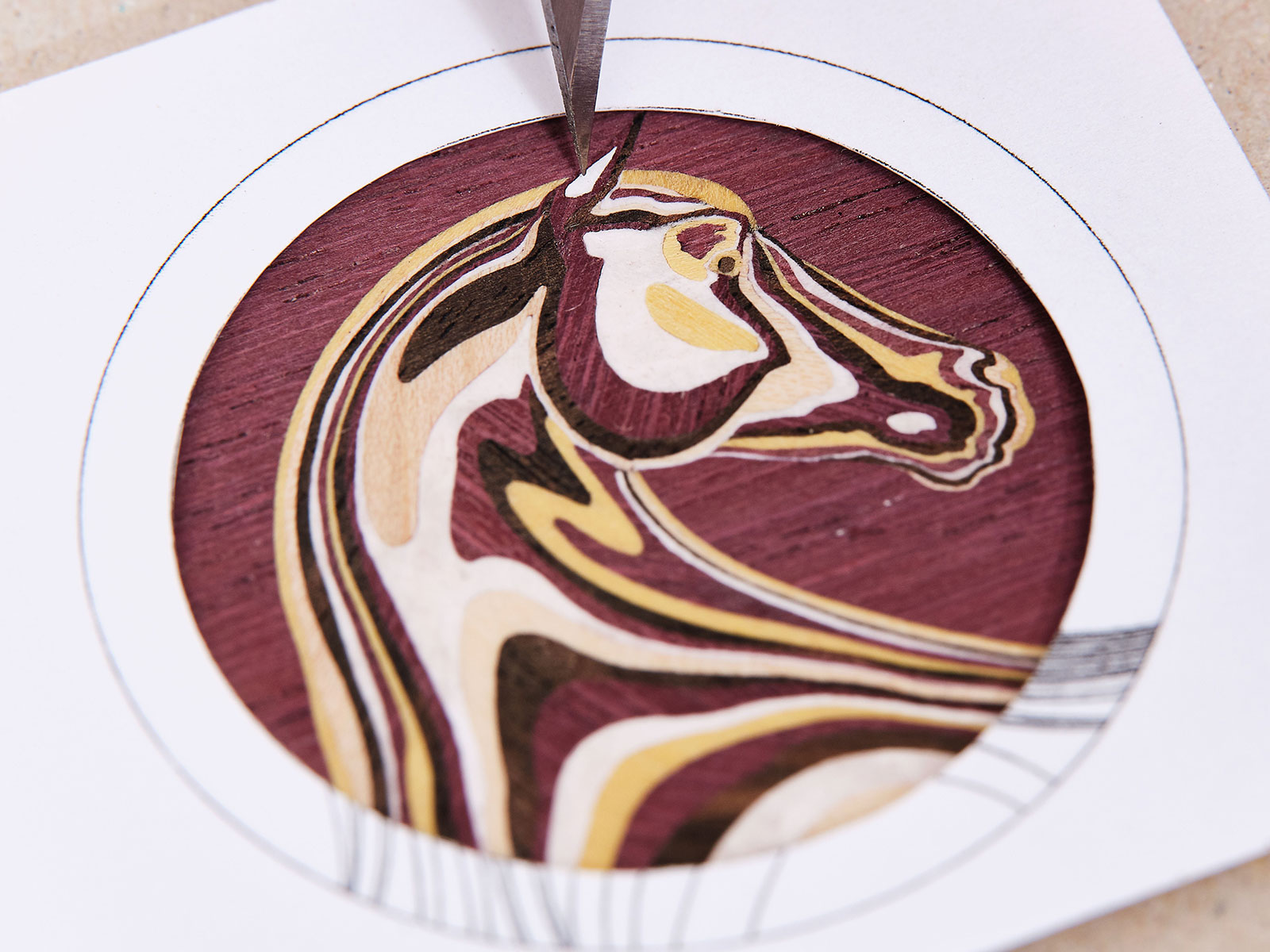 The Pégase Paysage is presented in a 39.5mm, 18k white gold case, and powered by the H1950, also produced by Vaucher. This is a wider but slimmer movement than the H1837 found in the Astrologie Nouvelle, thanks in part to its micro-rotor.

An artful take on a pragmatic complication.