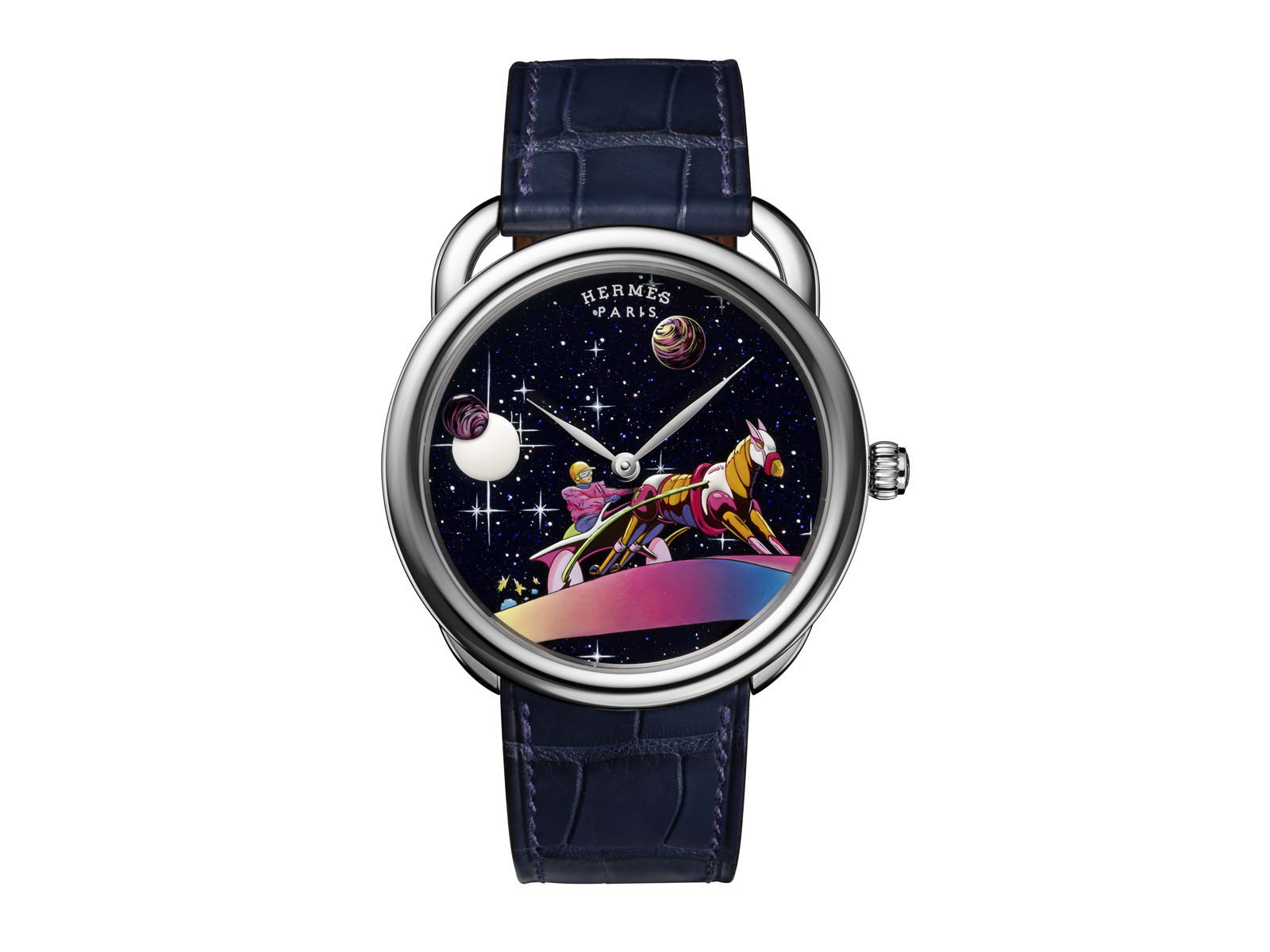 Defined by its refined and occasionally whimsical style, Hermès emphasises whimsy with the new Arceau Space Derby, which reinterprets the Space Derby scarves, repurposing the sci-fi motif as miniature paintings for the wrist.

The Arceau Space Derby will be available in two sizes: the smaller 38 mm with a diamond bezel and pink opaline glass dial, as well as two larger 41 mm models with dials in aventurine glass. The small model is limited to 24 pieces, while only 12 each will be made of the large models. 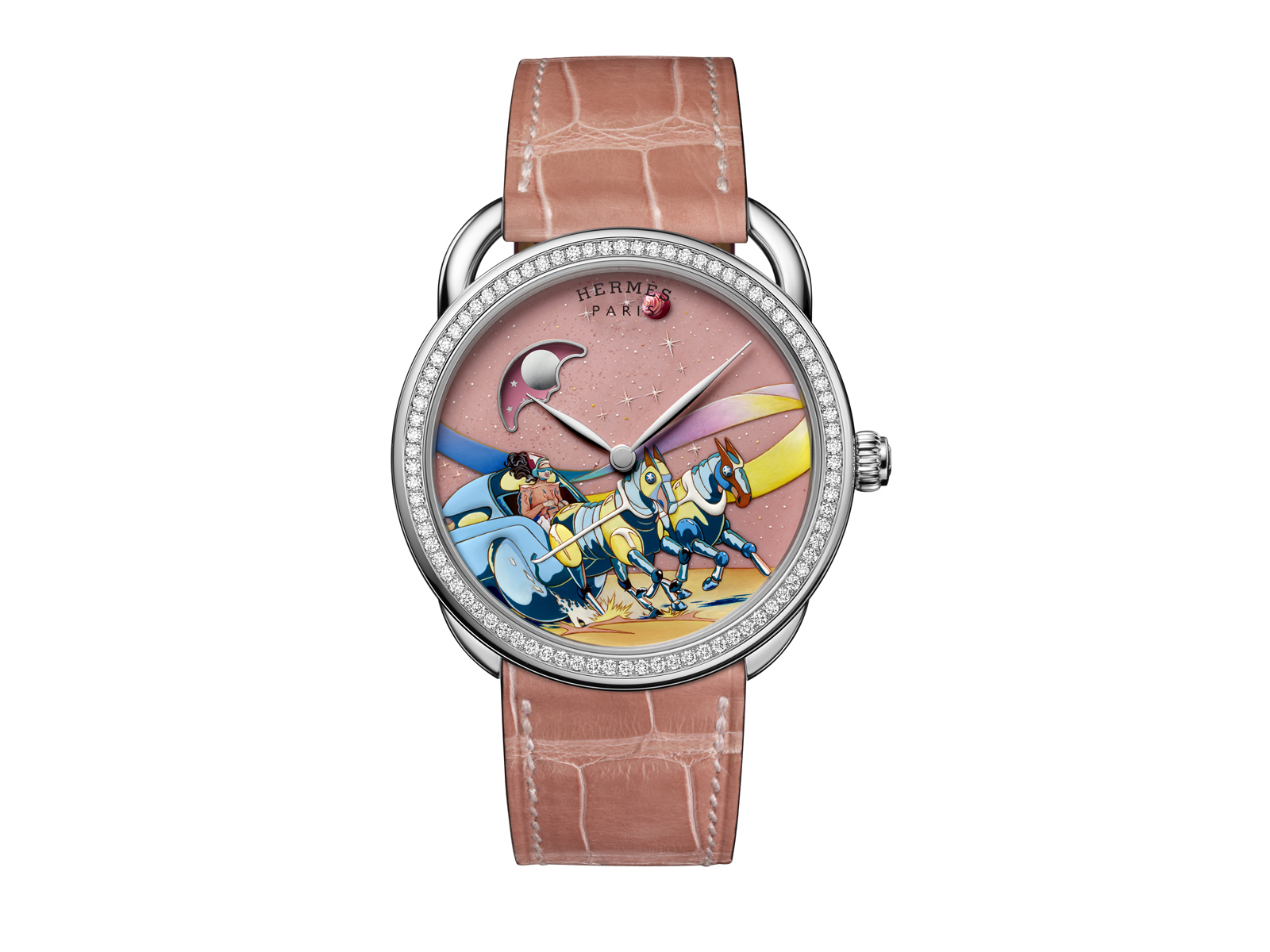 The smaller version with a pink opaline glass dial

I absolutely love the Arceau Space Derby. Hermès makes a diversity of goods, from leather to clothing to high-end homeware, but often sharing the same motifs that are typically appealing and original. So its habit of looking into its past designs for its wristwatches is brilliant.

The illustrator of Space Derby, French comic artist Ugo Bienvenu, drew inspiration from 20th-century American comics for the derby set amongst the stars. Depicting a robot horse yet so sci-fi it’s not immediately obvious, the painting is both overt and subtle in its reference to the longstanding equestrian history of Hermès, which was was founded as a saddle maker. And that also explains the signature Arceau watch case, which has an asymmetrical outline inspired by a stirrup. 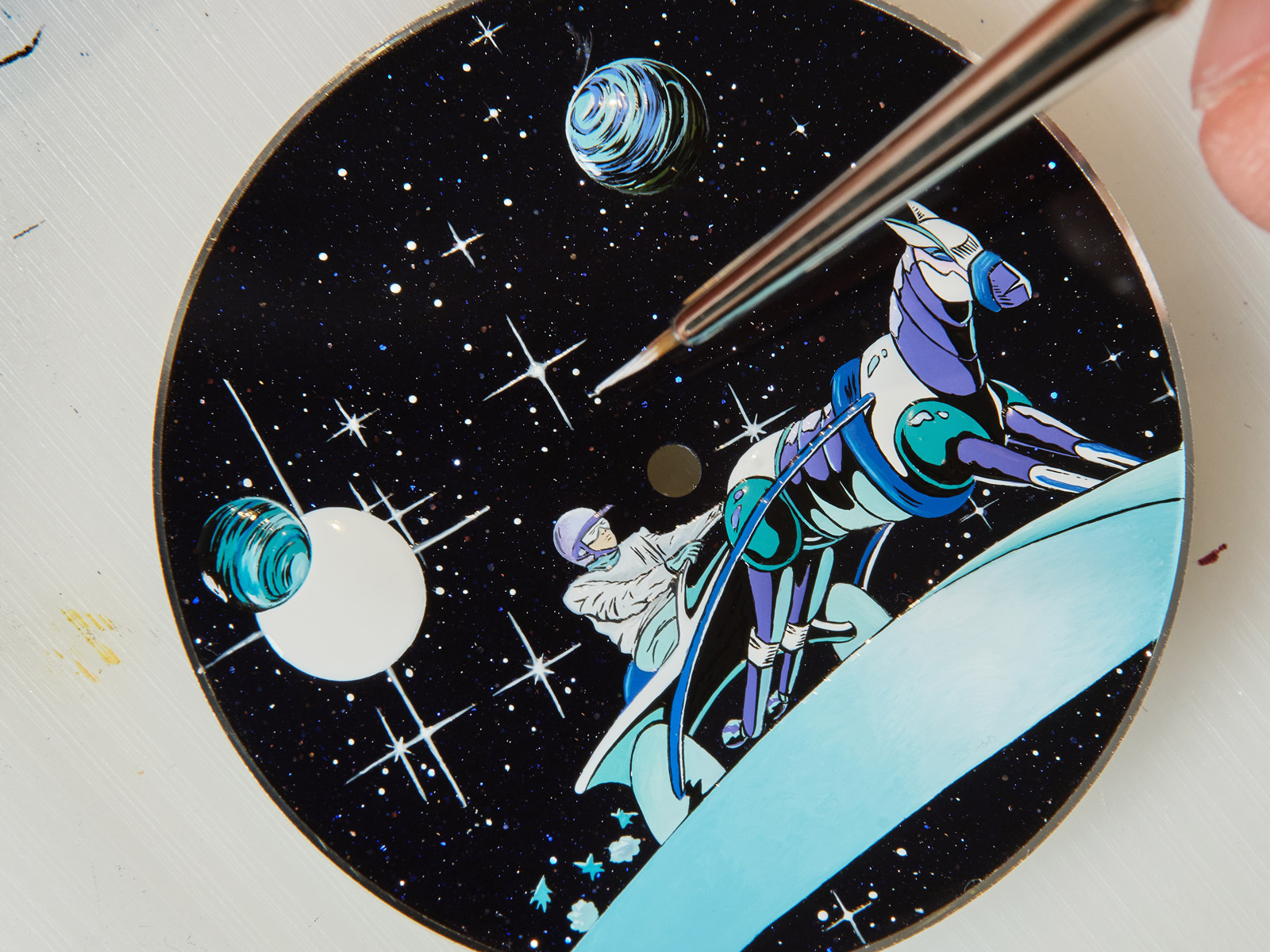 The diamond-set, 38 mm variant is clearly for women, while the 41 mm versions are unisex. Between the two larger models, my pick would be the iteration with the blue and purple painting. The colours complements the blue aventurine glass dial, creating in a sophisticated but unusual look that captures the spirit of the brand.

The Arceau Space Derby does have a hefty price tag of CHF62,700, approximately the same as the brand’s past watches featuring miniature painting. That being said, watches with such artisanal dial decoration are inevitably costly – and miniature painting is usually less costly than enamel or engraving – so the price of the Arceau Space Derby is reasonable all things considered. 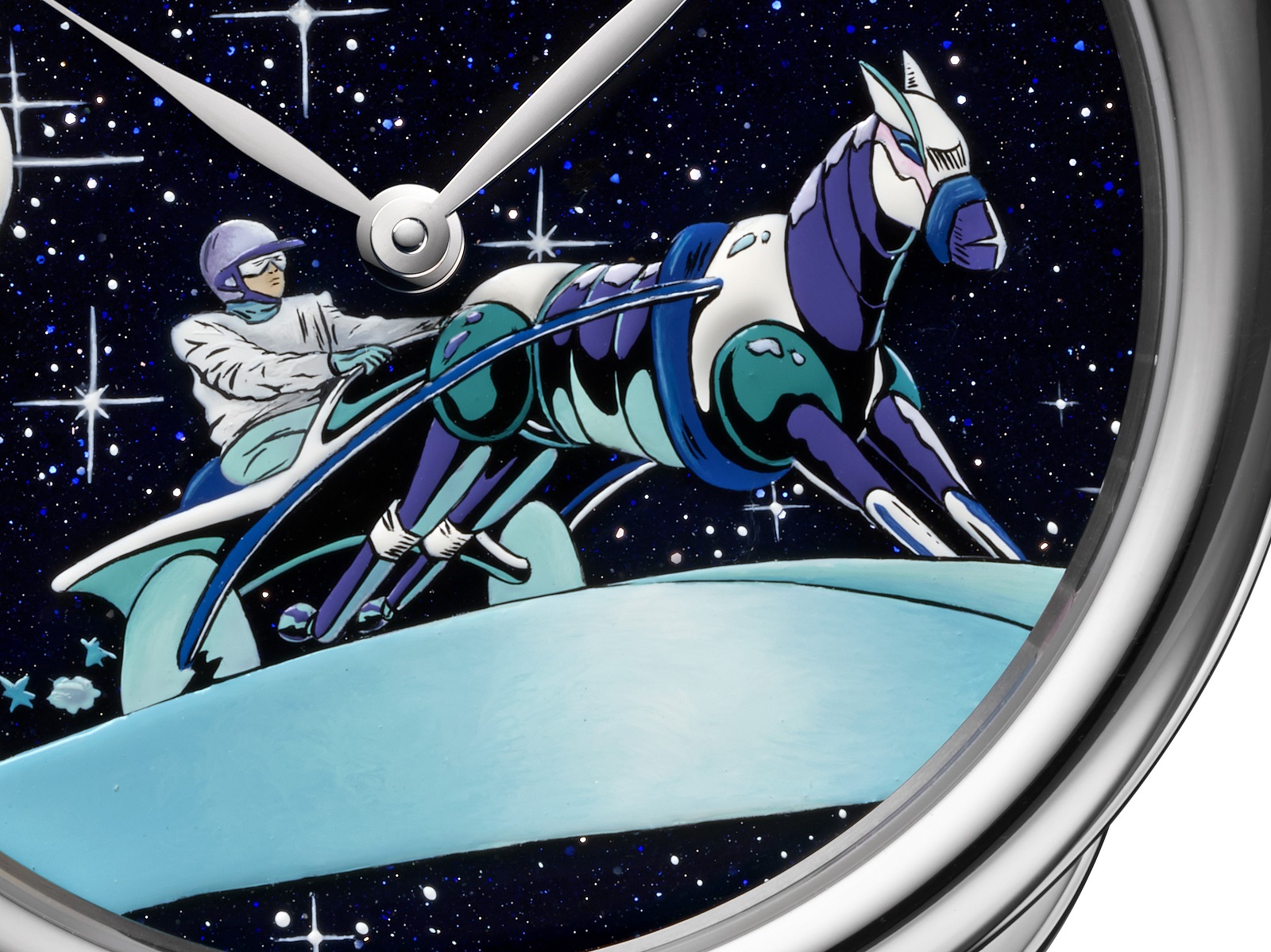 Race amongst the stars

The bright colours capture the spirit of the comic book inspiration, strongly evoking 20th century pop art. Each dial is artisanal in nature, explaining the extremely limited run of the Arceau Space Derby.

Crafted entirely in-house by skilled painters, the dials are essentially a tiny canvas for miniature painting. Layers and colours are painstakingly applied by hand with a tiny brush (likely with acrylic paint), before the dial is fired in a hot kiln to set the paint. Minute details such as the creases in the jockey’s uniform and shadows on the horses are all rendered in great detail. 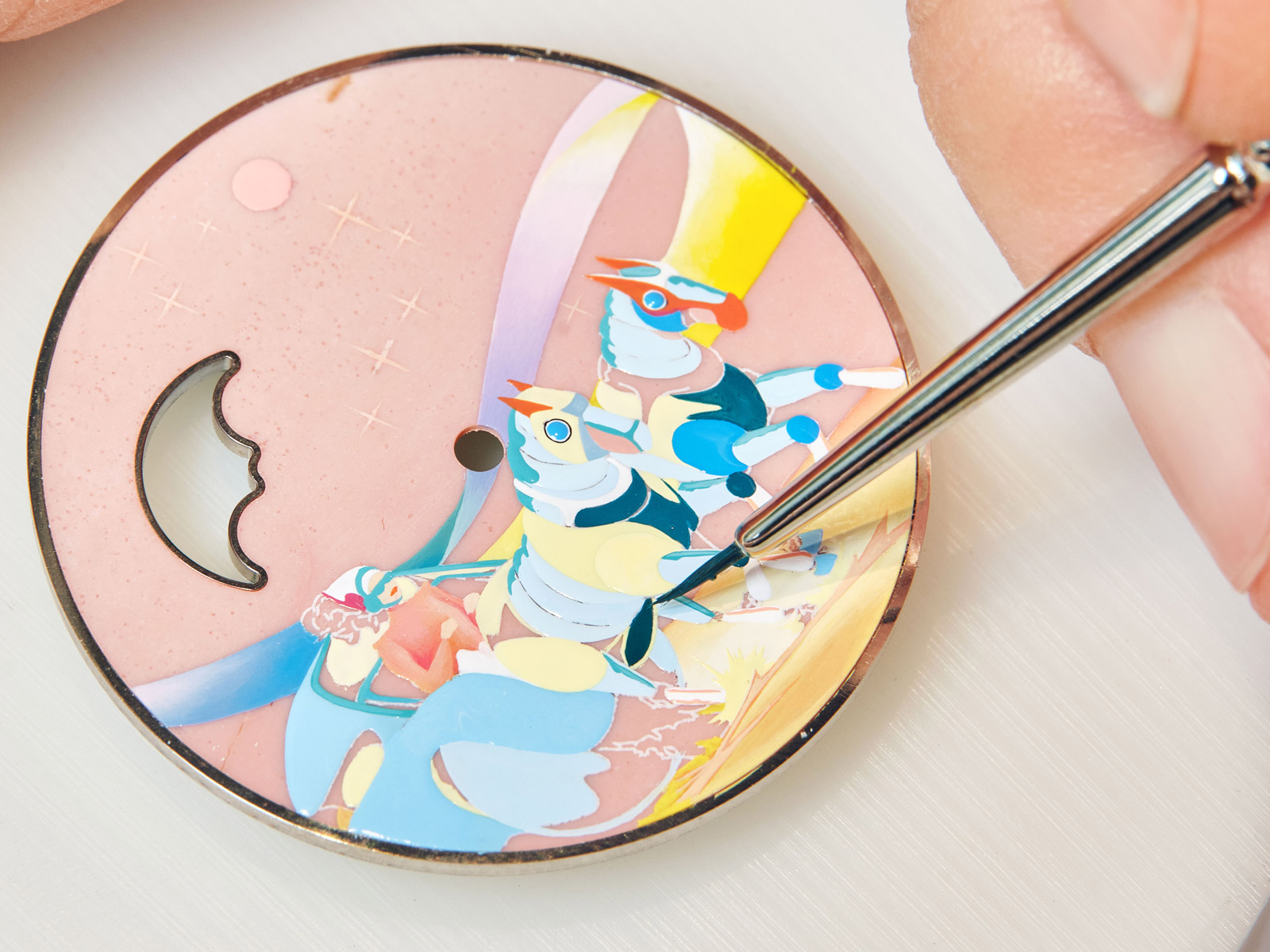 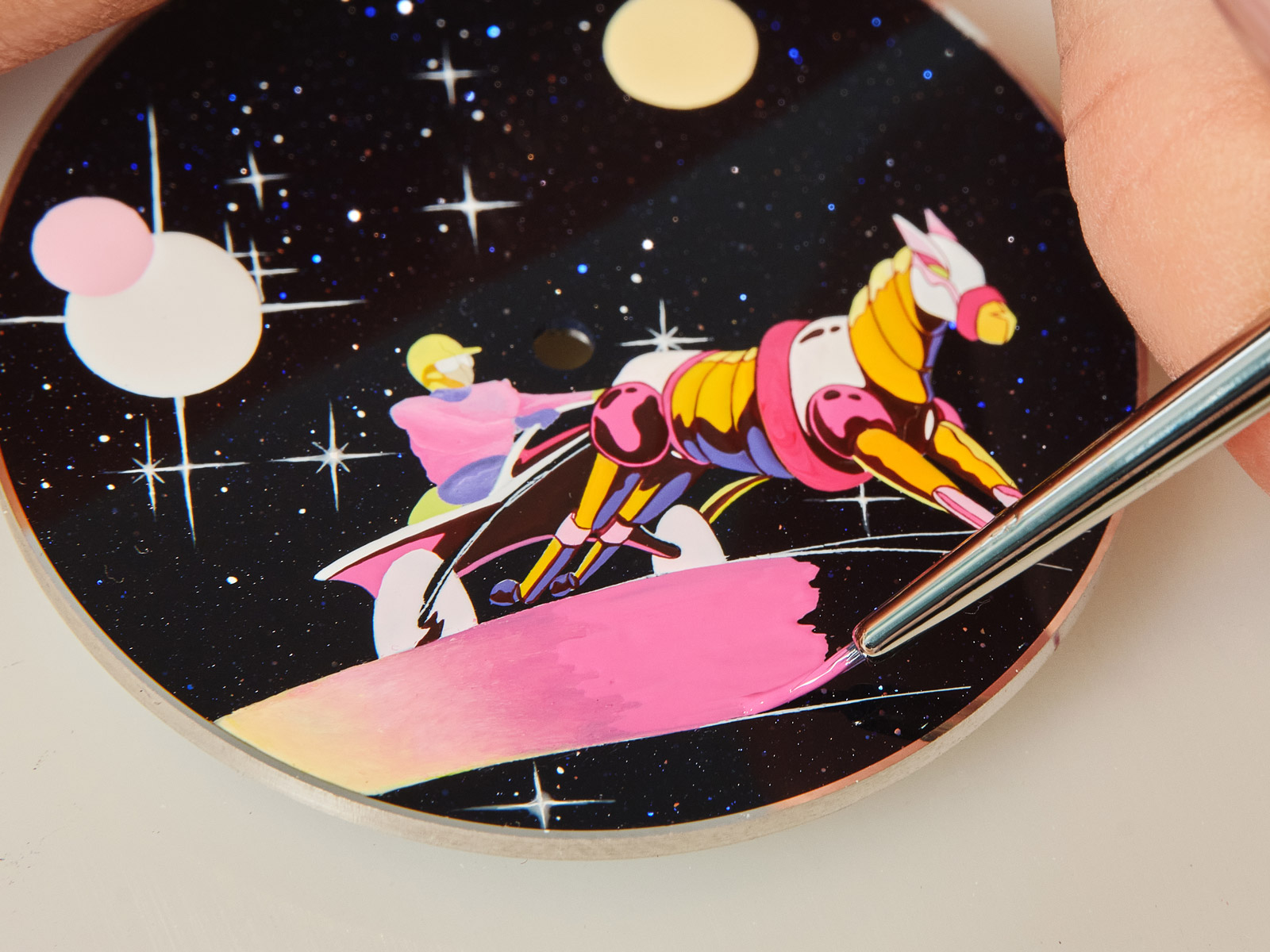 Under the hood is the H1837, a calibre produced by movement specialist Vaucher – which is partially owned by Hermès – that has a handy 50 hours of power reserve. Interestingly, while both versions are powered by the same movement, the smaller model features a moon phase complication, but the larger variants do not.

Availability: Starting June 2021 at Hermès boutiques
Price: Estimated to be CHF62,700; price to be confirmed at delivery

A trio of watches that frame tiny paintings created with a micro-brush.