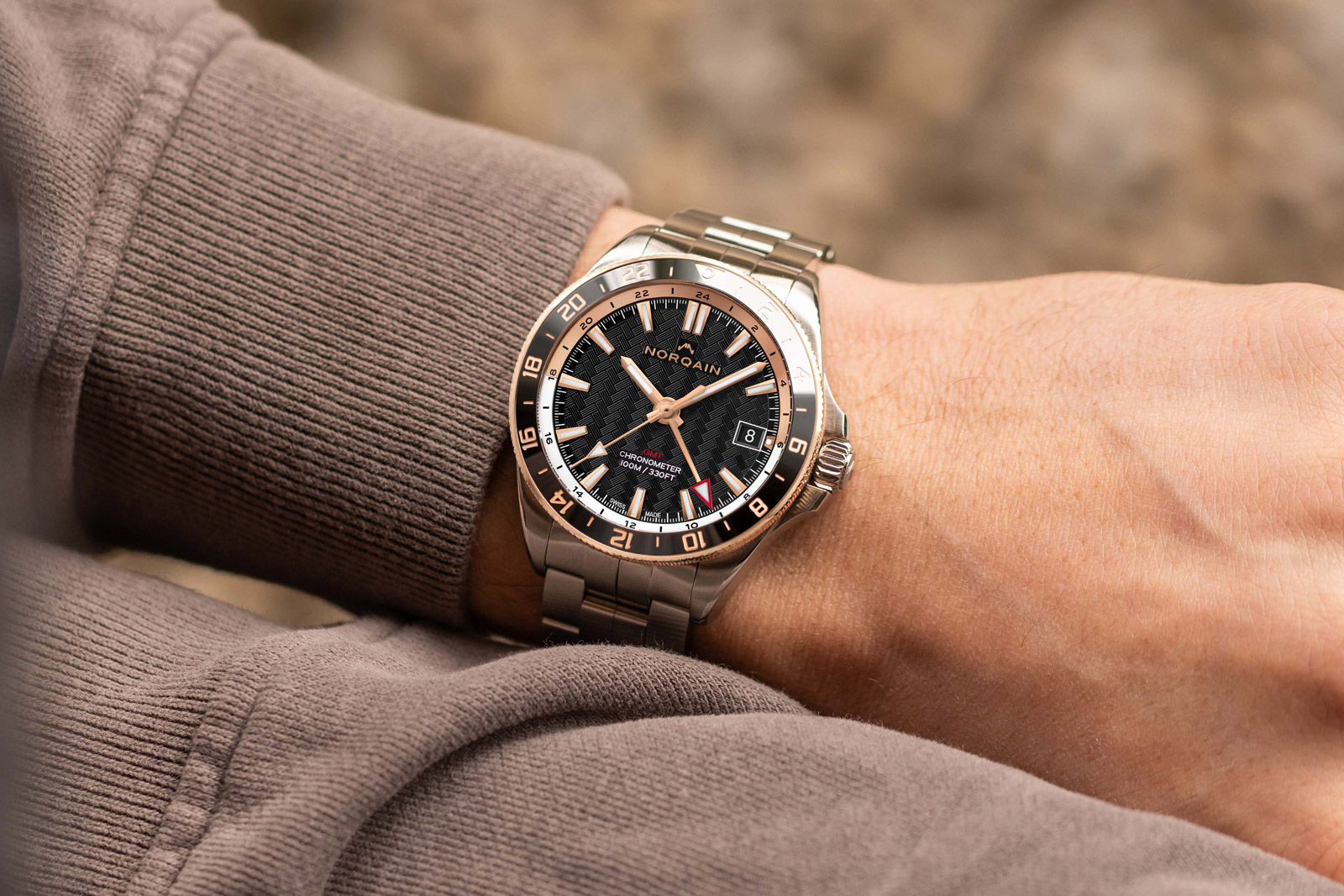 A young brand established only in 2018 – but backed by noted industry figures – Norqain is best known for sports watches equipped with high-quality movements produced by Kenissi, the manufacture owned by Tudor and Chanel.

At the higher end of the brand’s offerings is a dual-time watch with a ceramic bezel insert and patterned dial that was introduced just last year in steel. Now it gets a luxe facelift, resulting in the Adventure Neverest GMT 41mm Steel & Gold. 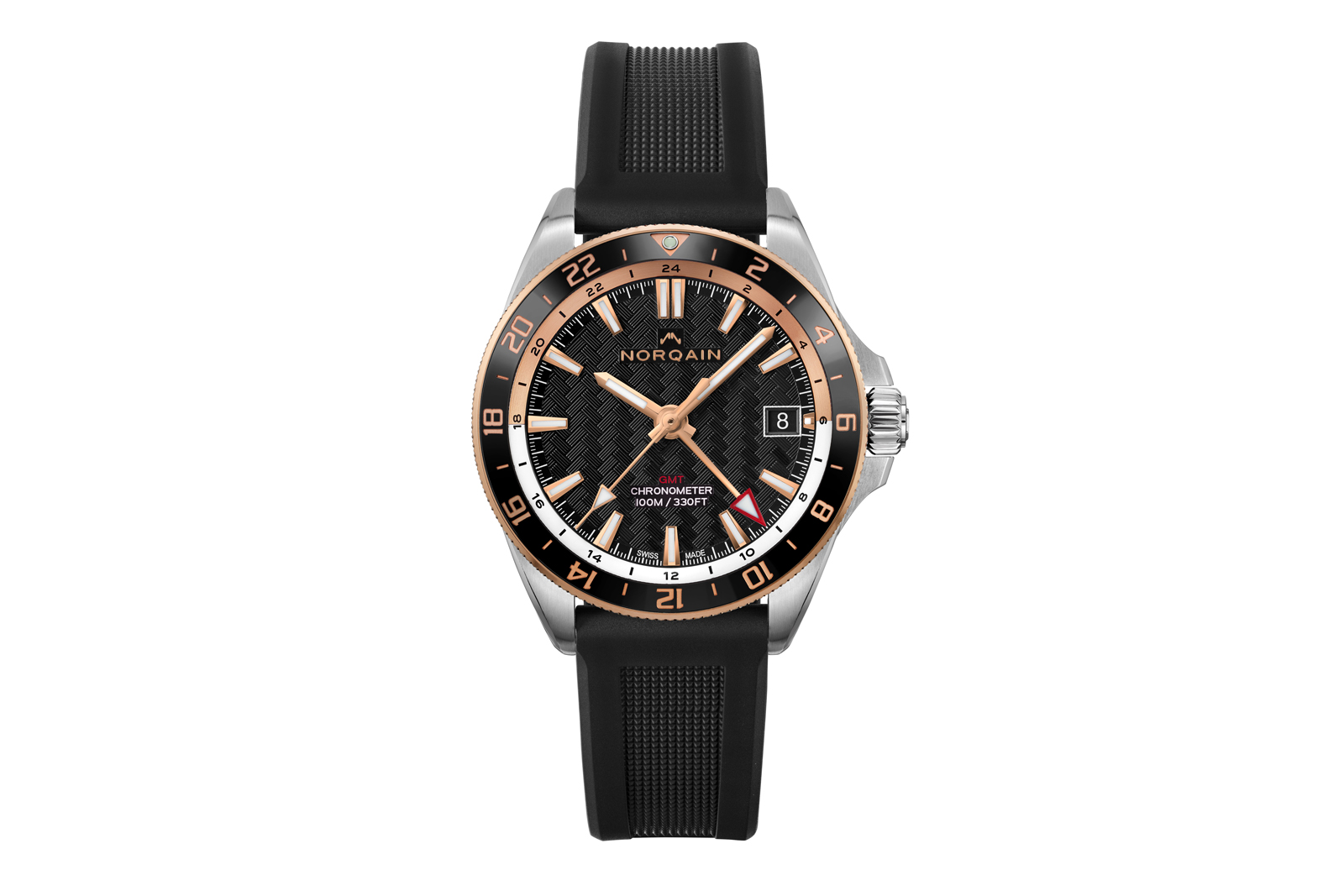 Available either with rubber strap or steel bracelet

The all-steel Neverest GMT a straightforward, agreeable proposition: practical functions backed by a solid movement, while boasting a fairly elaborate case and dial.

Yet such features aren’t enough in today’s market since extras like a ceramic bezel are almost the norm. Despite its strong execution in terms of fit and finish, the original Neverest GMT lacked a punchy aesthetic, with its styling seeming a bit derivative.

That’s changed with the two-tone model. The addition of a modest quantity of pink gold gives the watch a more upscale feel, especially complemented by the glossy ceramic bezel, resulting in a look more comparable with its competition in the same price range. 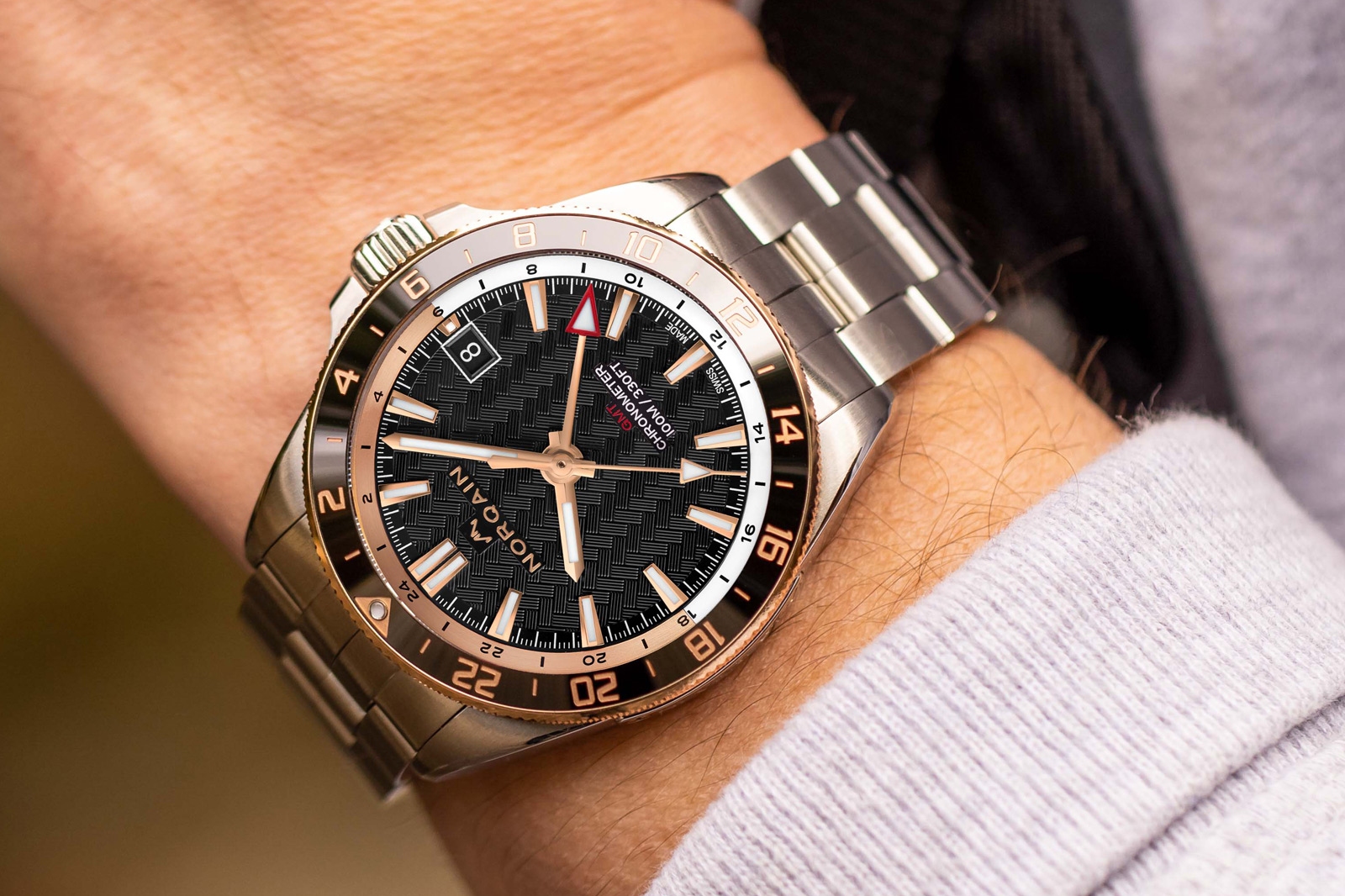 Two-tone here means the addition of gold details, rather than an excessive use of the precious metal

The gold details, however, mean the watch is about 40% pricier than its steel counterpart. At US$5,290 on a strap and more on a bracelet, the two-tone Neverest GMT goes head to head against watches from establishment brands like Tudor, and to a lesser extent Omega, which sits one level up on the price spectrum. While the build quality does rationalise the price, Norqain’s status as a startup brand means it less compelling than something from Tudor (which relies on similar movements).

That said, 10% of the profits from the sale of each watch be donated the Butterfly Help Project, a foundation that brings education to children in the Himalayas. That, along with the fact that the watch is a 100-piece limited edition, makes the price a bit more digestible. 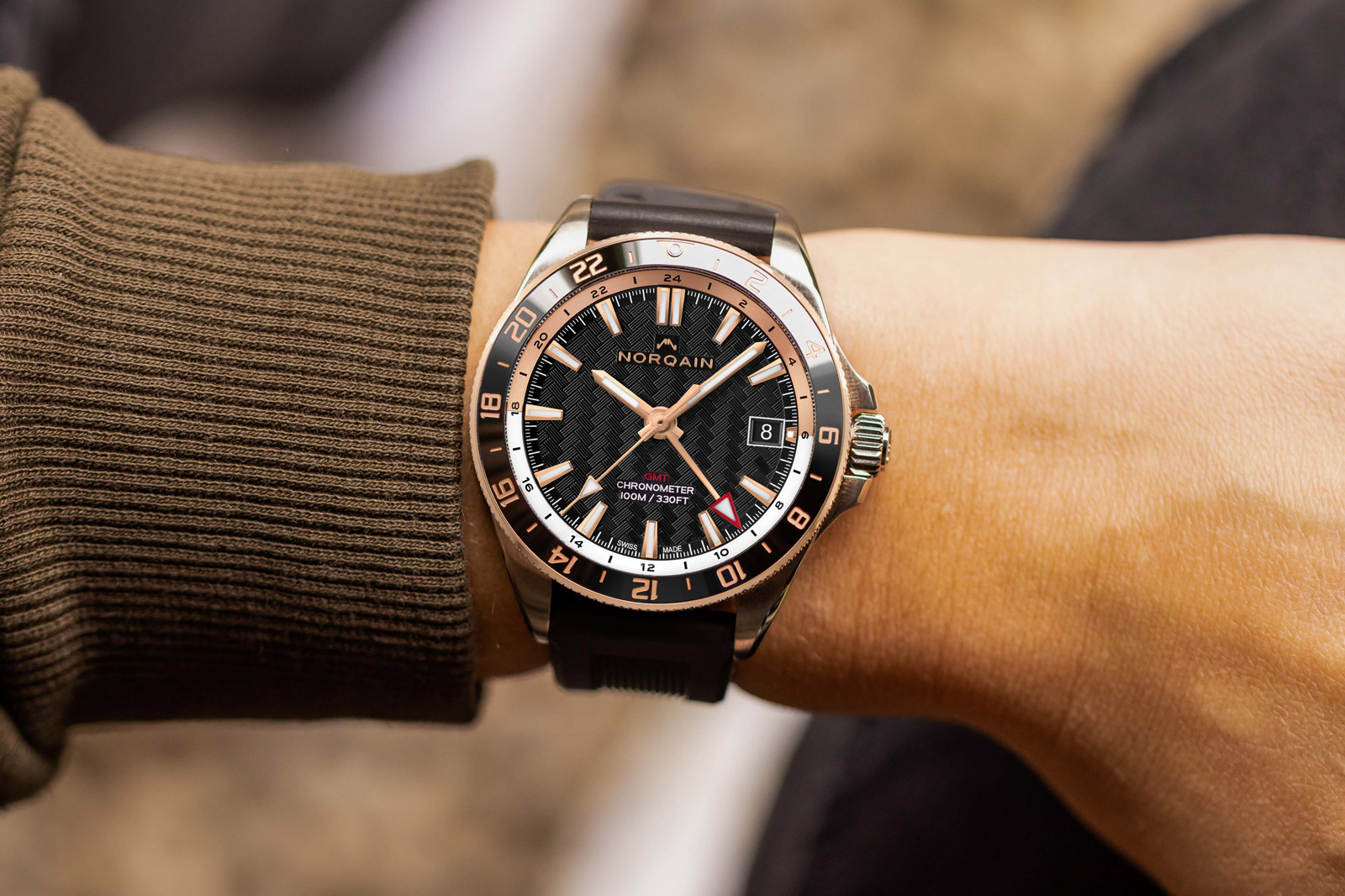 For someone who wants to go beyond mainstream brands

Not long after its launch, Norqain announced a partnership with movement manufacture Kenissi, no doubt thanks to its founding family’s historical presence in the Swiss watchmaking industry.

Norqain was founded by Ben Kuffer, whose father Marc was the former chief executive of Roventa Henex, one of the biggest private label watch manufacturers in Switzerland. Mr Kuffer was joined shortly after its formation by Ted Schneider, son of Theodore, once the owner of Breitling. And finally, the chief executive of Kenissi is Jean-Paul Girardin, formerly the right-hand man of the senior Schneider at Breitling.

So Norqain gets access to the same high-end movements found in Tudor’s top-of-the-line model, though the specific calibres supplied to Norqain do with a conventional alloy hairspring, instead of the amagnetic silicon hairspring found in the Tudor versions. 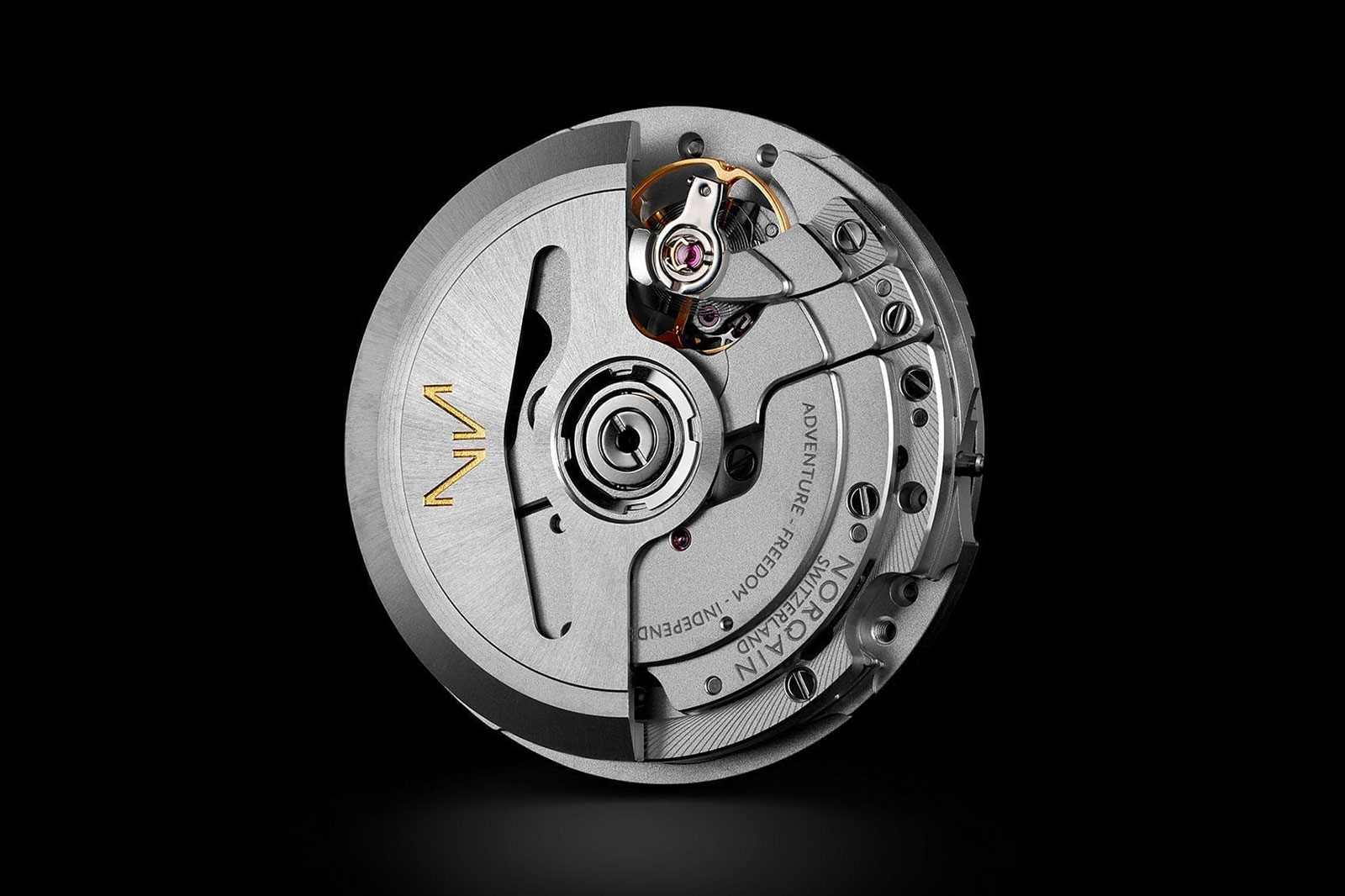 As a result, the NN20/2 inside the Neverest GMT is a cut above the ETA-based movements found in most of the competition. Not only does it have an hour hand that can be set independently, the NN20/2 also scores higher marks in terms of practicality. It has a longer power reserve and also better shock resistance thanks to the full balance bridge.

The only downside of the movement is its thickness, which is fairly substantial. That brings the case height to almost 15 mm – making it one of the thickest GMT watches on the market – but the tall case is disguised in part by the wide, 41 mm case.

On top of its strong mechanical foundation, the Neverest GMT does well in its external construction. The dial, for example, is decorated with a crosshatch pattern that adds depth to the design. And the visual effect of the pattern is compounded by the polished, faceted markers as they catch the light.

Also attractive is the polished bevel along the upper edge of the lugs, a subtle detail that brings to mind vintage sports watches while also giving the case a great sense of refinement. 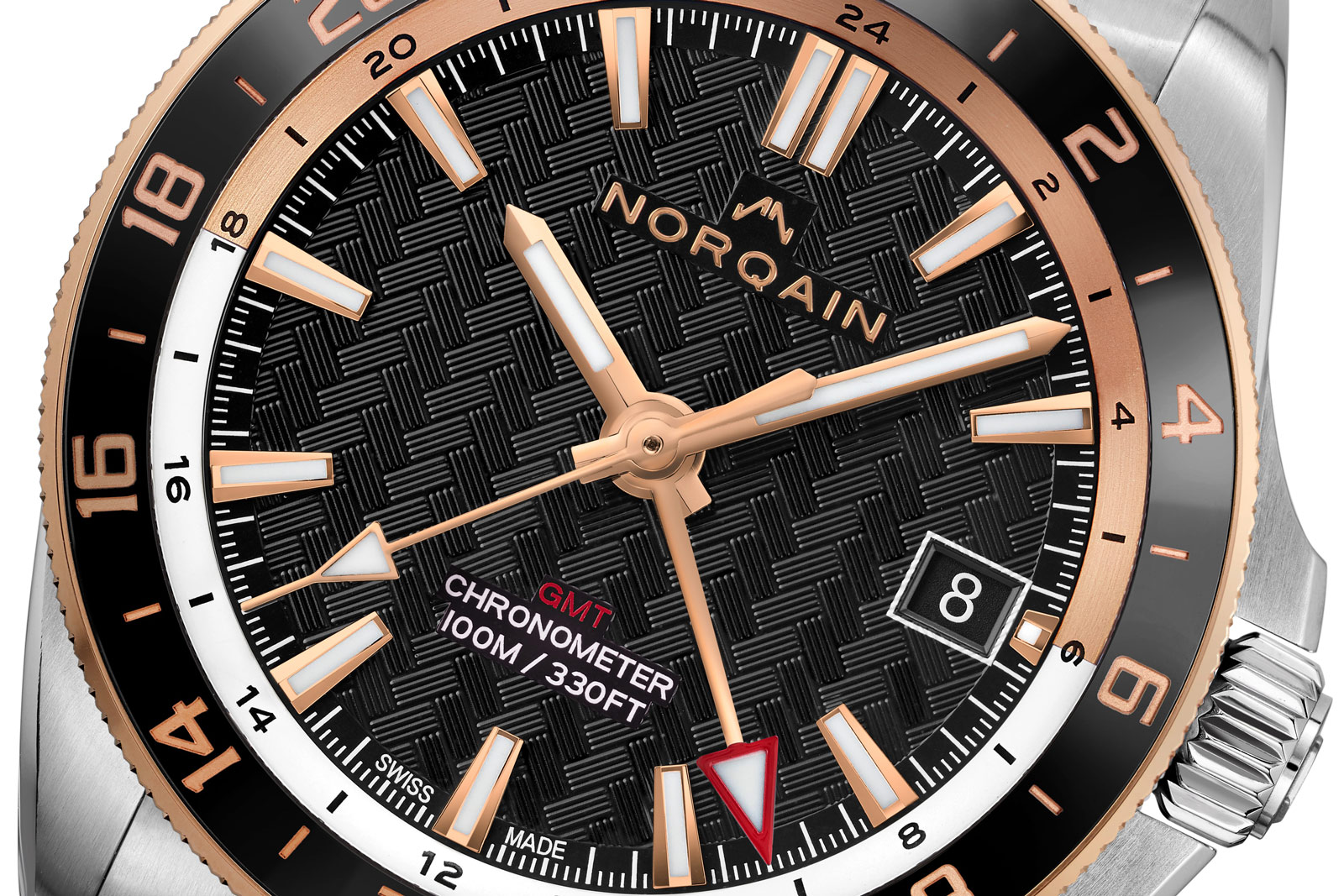 Despite being simple, the crosshatch dial is something of a Norqain trademark, being found across the collection