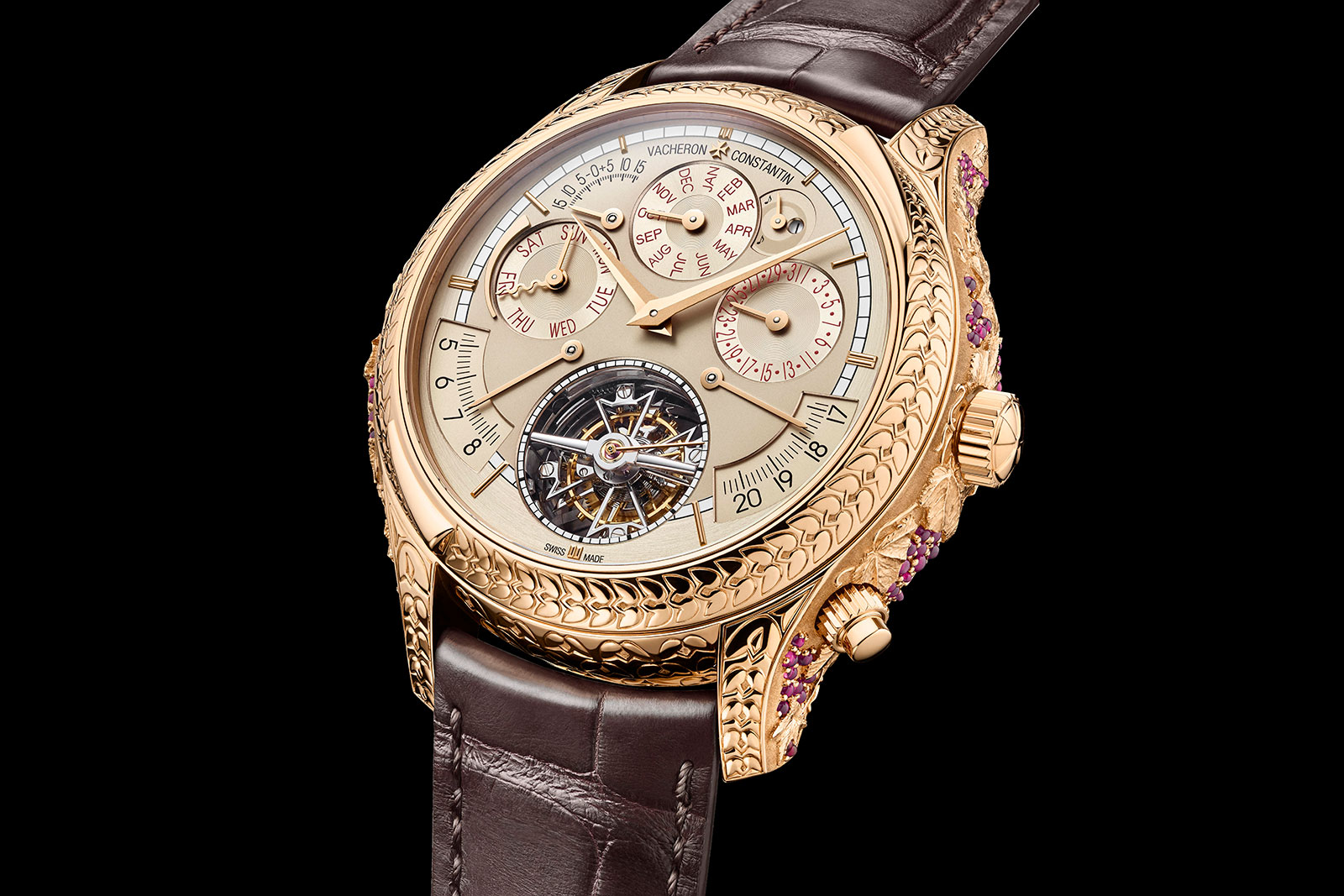 Vacheron Constantin is starting the year in a big way with the Les Cabinotiers Grande Complication Bacchus. A double-faced grand complication, the Bacchus is part of the brand’s annual collection of one-of-a-kind timepieces. The Bacchus ranks amongst the most complex watches produced by Vacheron Constantin, thanks to the cal. 2755 GC16 that’s made up of over 800 parts.

Though the Geneva watchmaker has used variations of the same calibre in past watches, the Bacchus is unusual even amongst its siblings because of its case decoration, which includes both hand engraving and gem setting, forming a grapevine motif in relief on both sides of the case. 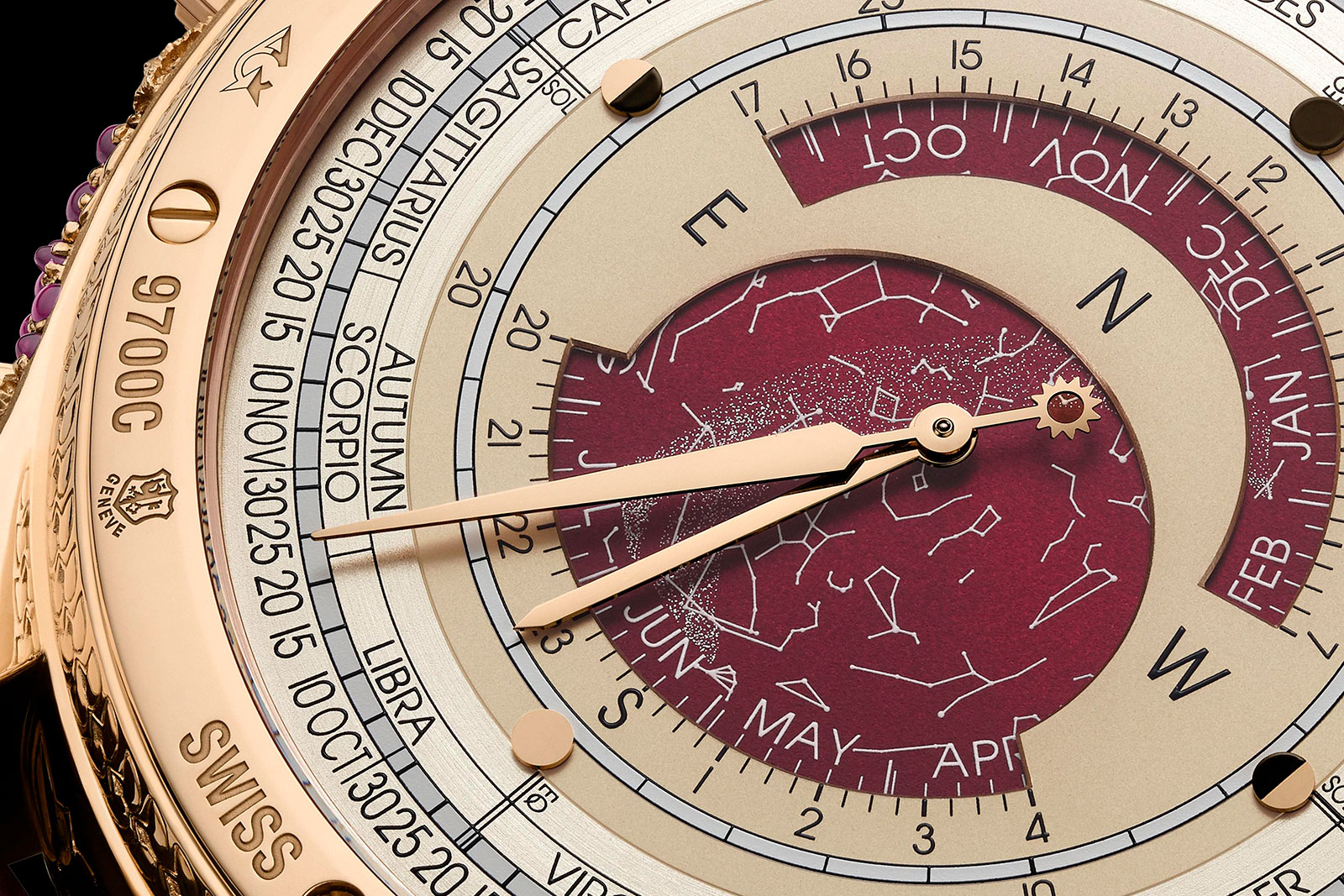 The star chart display on the reverse of the Bacchus

The Bacchus is the sort of grand complication that makes a statement, belonging in the same category of watch as the Patek Philippe Sky Moon Tourbillon. It’s extremely large, very complex, and impossible to miss on the wrist.

Though a one-off creation, the Bacchus is not the first two-faced grand complication from Vacheron Constantin. In fact, several past models, notably the Phoenix of 2018, have contained variations of the same calibre found in the Bacchus. But the Bacchus has a unique decoration, in fact one of the most elaborate to date. The minute repeater is activated by turning the bezel, leaving the case free of a traditional slide

Vacheron Constantin’s grand complications are frequently engraved, but Bacchus seems to be the first – or at least the first revealed publicly – that has precious stones forming part of the engraved motif. While the ornate style won’t be for everyone, it is impressive in both craft and execution.

The brand won’t reveal the price of the watch, but with similar past models priced in the US$2-3 million range, it won’t be easily affordable. That said, such watches typically sell quite quickly, especially in past years when Vacheron Constantin staged travelling trunk shows at key cities around the world. Or perhaps the Bacchus was conceived with a wine-drinking, complications-loving customer in mind.

The 18k pink gold case is a massive 47 mm in diameter and 19.1 mm high, leaving ample room for engraving on almost every surface. Bot the bezel, lugs, and back are engraved with a repeating grapevine motif, but the most elaborate decoration is found on the flanks of the case.

Requiring the skills of both an engraver and gem-setter, the case decoration took some 300 hours of work to complete. Both sides of the case are relief engraved with grapevines and accented with rubies, some 113 of them totalling 1.84 carats. 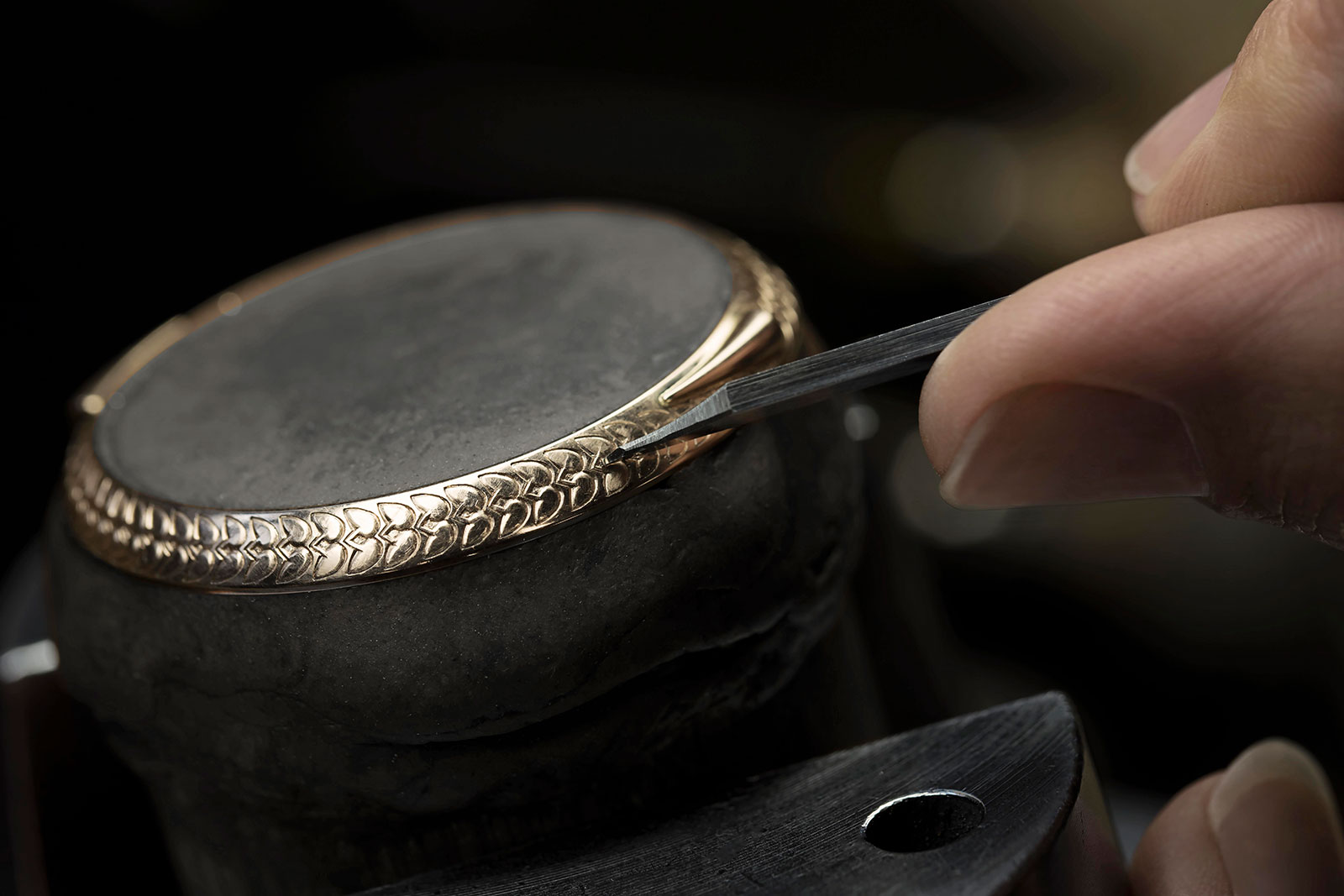 The process started with the engraving putting in the outlines of the motif as well as the recesses for the rubies. Then the gem-setter set the cabochon-cut rubies before returning the case to the engraver for the final step of completing the engraving by adding definition and depth. 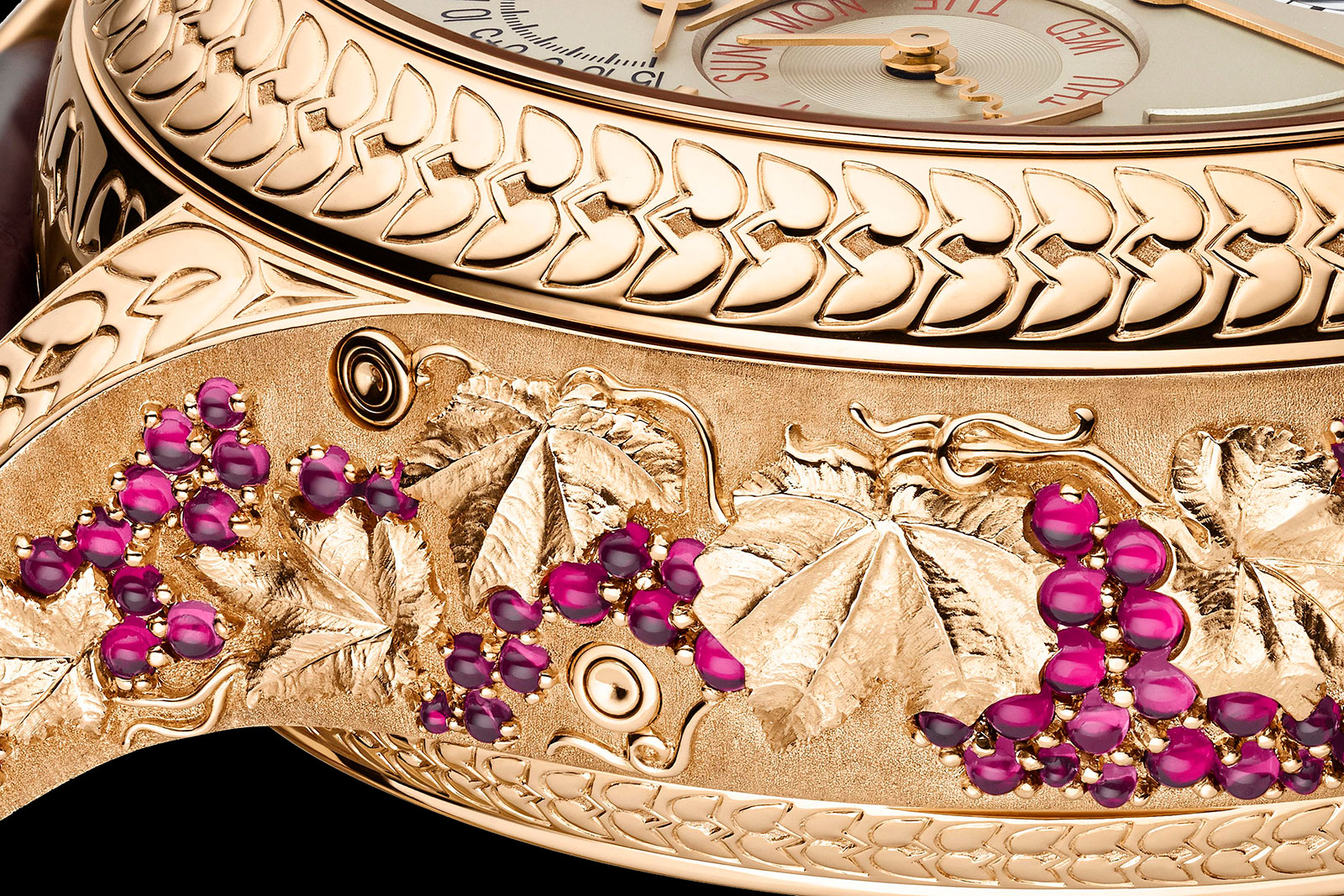 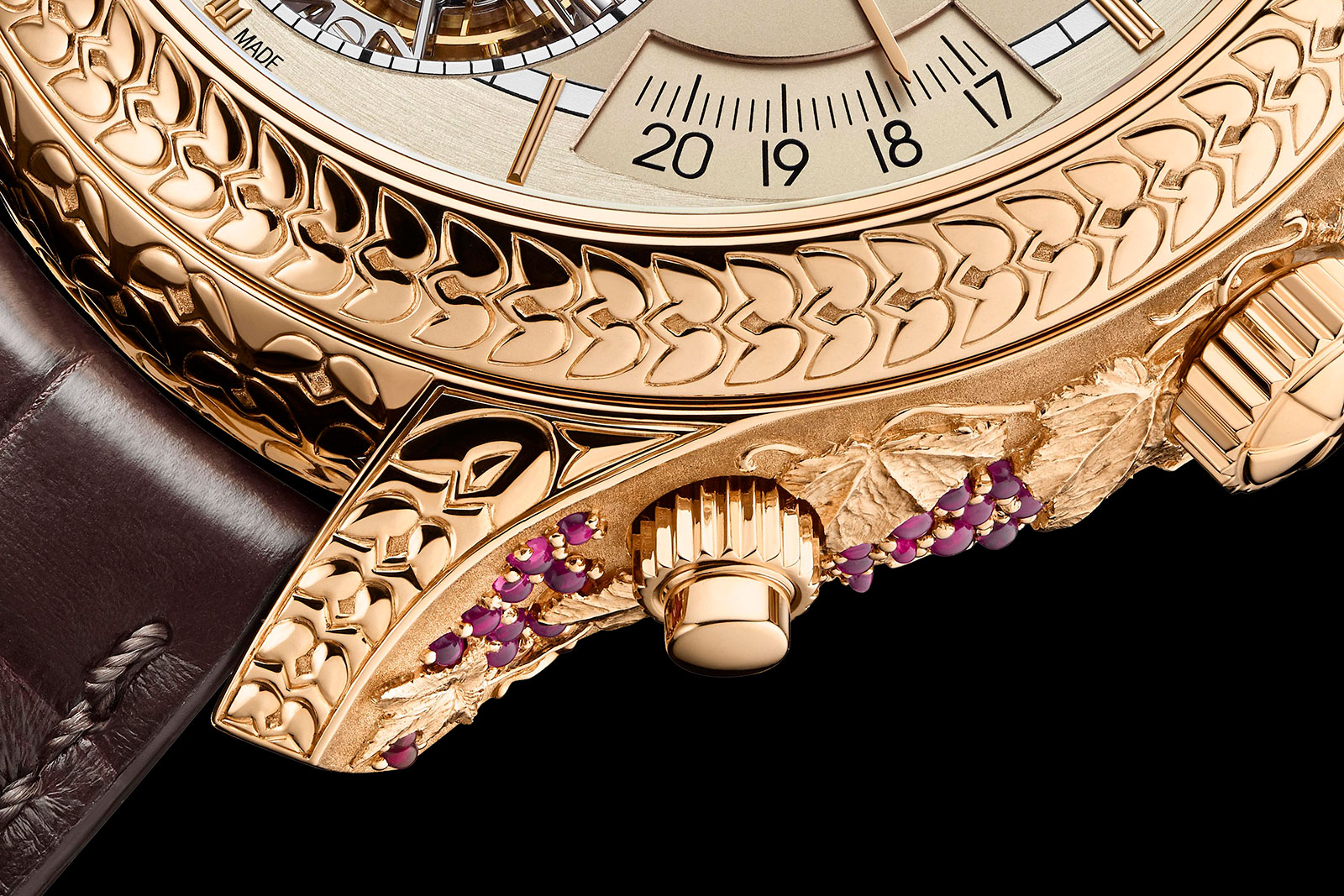 Within the large case is the cal. 2755, a hand-wind movement that’s descended from the calibre developed for the Tour de l’Ile, the mega-complication created for Vacheron Constantin’s 250th anniversary in 2005.

Though simpler than the Tour de l’Ile movement, the cal 2755 still boasts a long list of complications – explain its 839 part count – including a perpetual calendar with equation of time, minute repeater, and a star chart on its reverse. 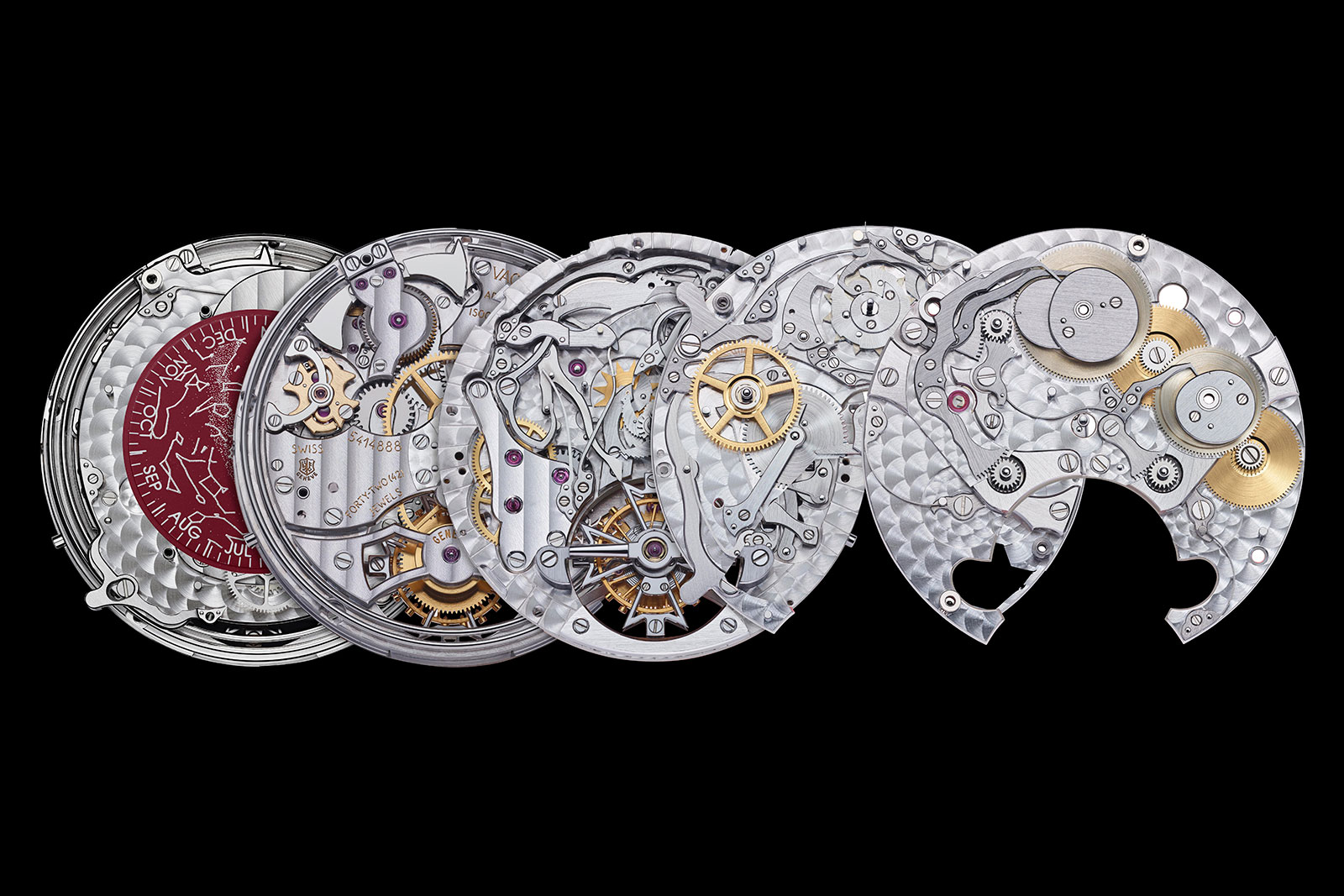 An exploded view of the cal. 2755 showing the layers of the complication plates

The front of the watch contains both the perpetual calendar, power reserve, and tourbillon, while the reverse accommodates the star chart and sidereal time display. 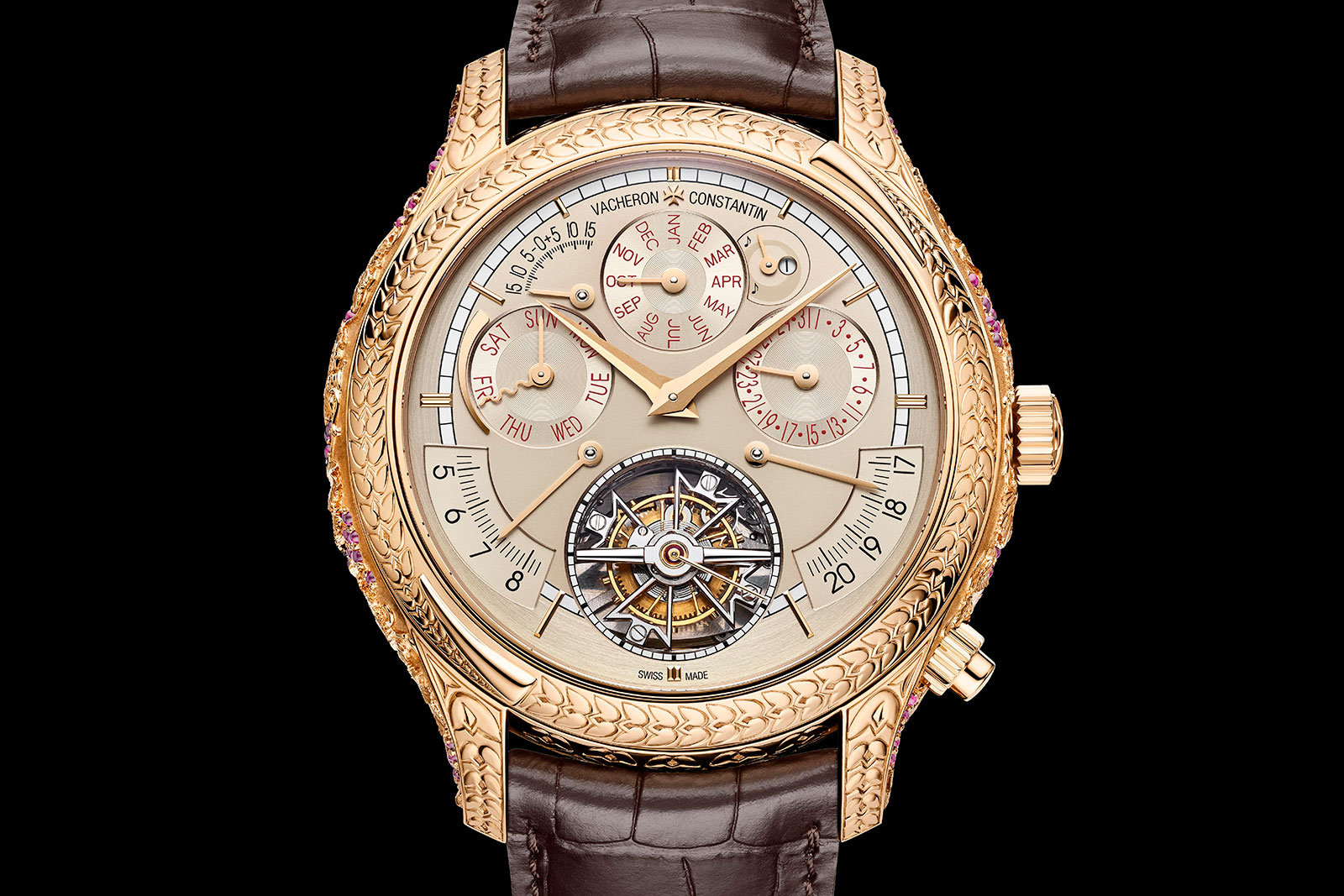 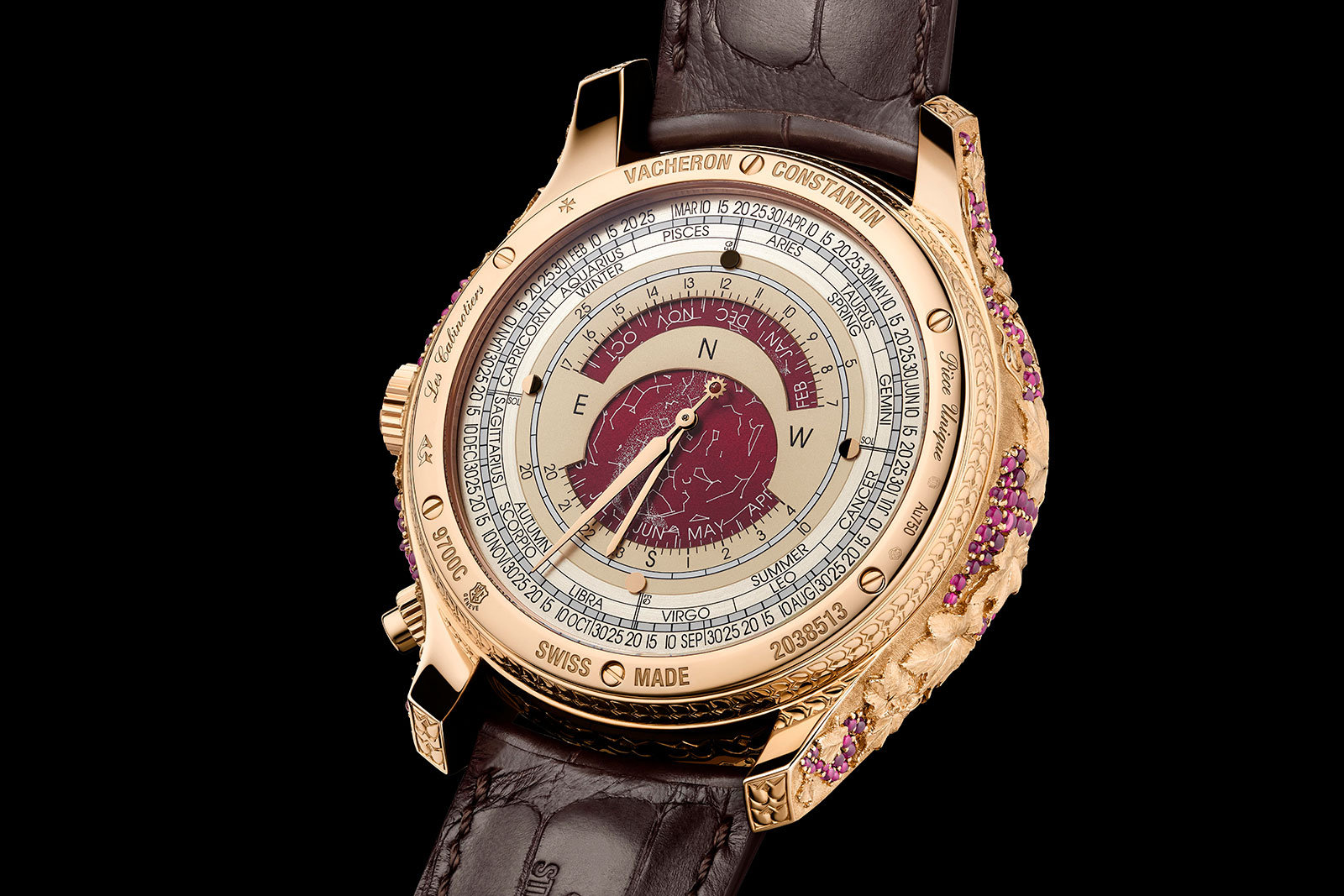 The reverse of the watch has a star chart, sidereal time display, as well as a zodiac and seasonal calendar