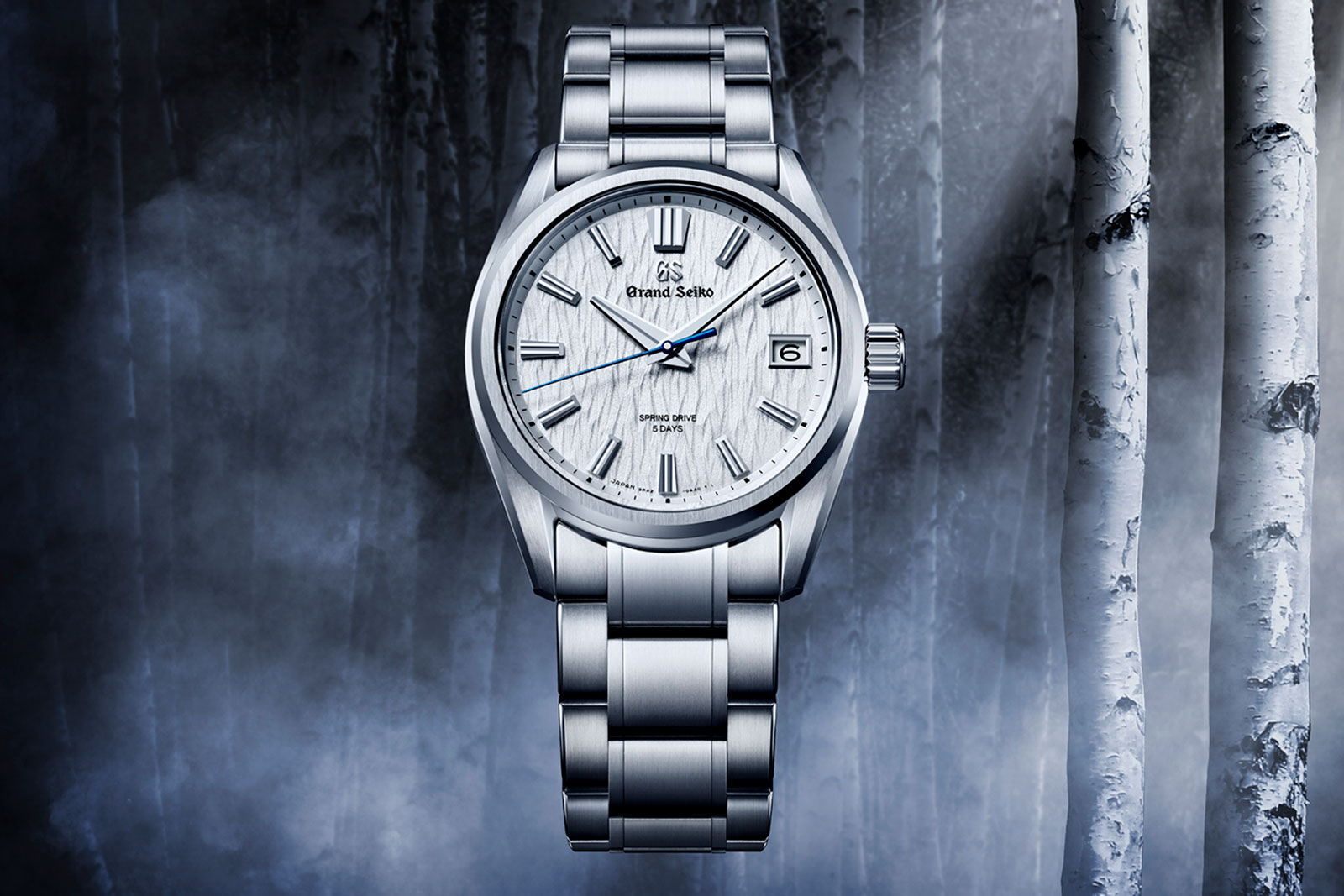 Though it was two years ago as the Grand Seiko’s flagship Spring Drive movement, the 9RA5 still feels new, simply because the latest-generation movement hasn’t found its way into many watches, save for a pair of limited editions.

Now it finally makes it into a regular-production model, the Grand Seiko Spring Drive SLGA009 “White Birch”. The latest Spring Drive, like the mechanical SLGH005, is inspired by the tree of the same name that’s native to the area around Grand Seiko Studio Shizukuishi. 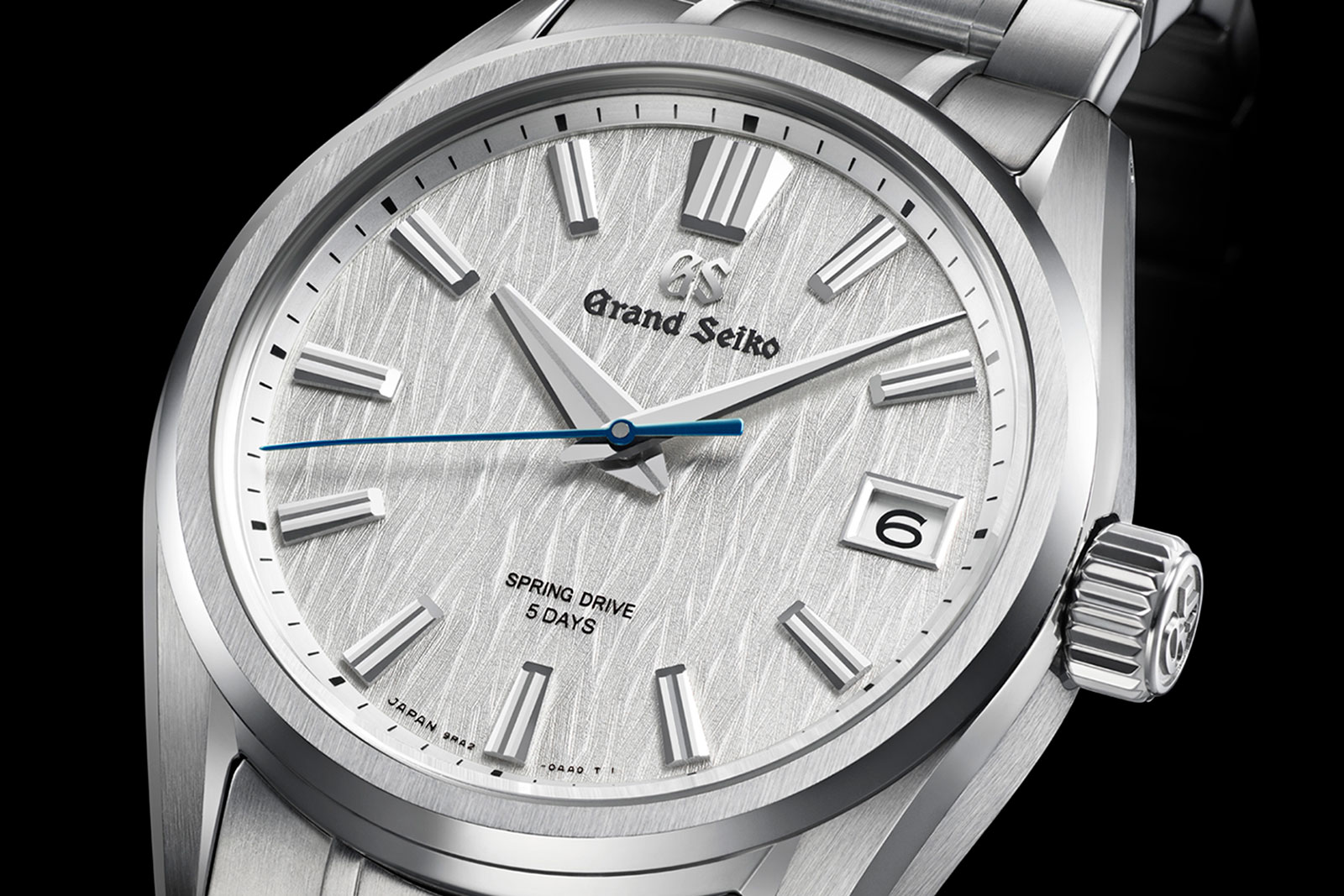 The SLGH009 “White Birch” clearly becomes the Grand Seiko’s showcase Spring Drive – it resembles the previous generation’s bestseller, the famous “Snowflake”, but is substantially upgraded in terms of features and finish. The combination of familiar styling and improved quality makes it attractive.

Part of the appeal lies in the 9RA5 movement, which on the surface seems like a mere upgrade over the predecessor 9R65. But it is more than just the power reserve being increased to five days, and the new calibre boasts an entirely new architecture, including both a new gear train and integrated circuit for the Spring Drive regulator, as well as a better finishing.

The other aspect of its appeal lies in the design, which has dubbed “Evolution 9”. As always is the case with Grand Seiko, Evolution 9 is inspired by vintage Grand Seiko models, but brings with it a sense of solidity and refinement, thanks to the flatter case, heftier bracelet, along with details like the extra-wide, diamond-cut hour markers and hands.

But the similarity between the automatic and Spring Drive “White Birch” watches is puzzling, since each barely differs from the other on the front. They are almost identical, but perhaps that’s the point – they reinforce each other’s identity, creating a shared aesthetic for the brand’s newest movements, which more effectively communicates the fact that both watches have a latest-generation movement. 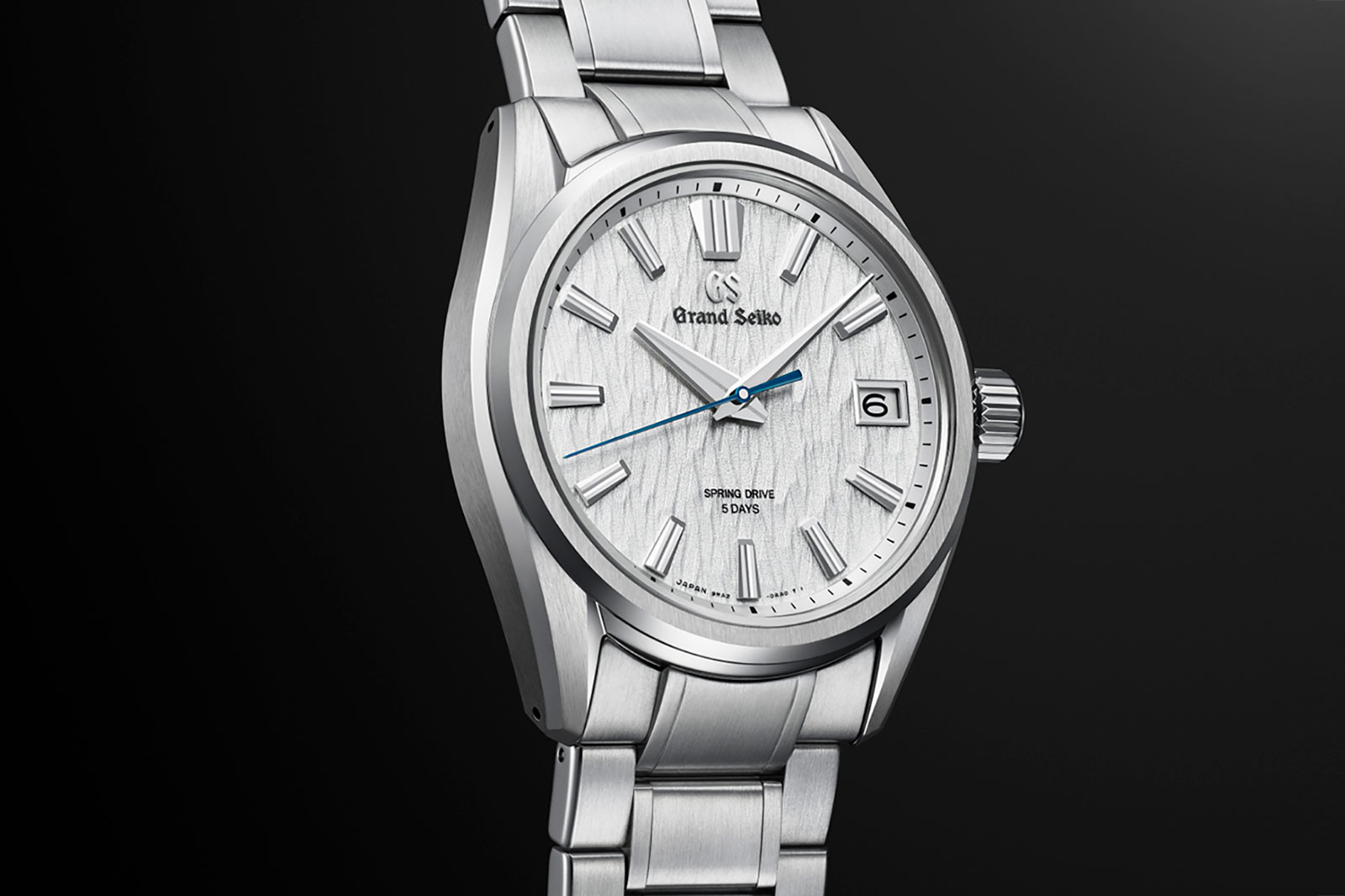 The SLGA009 perfectly encapsulates the Grand Seiko’s strengths, namely a dial motif inspired by nature as well as a unique hybrid-mechanical oscillator for the movement that brings with it a seconds hand that smoothly glides around the dial.

Like its Hi-Beat automatic counterpart, the SLGA009 has a dial inspired by the bark of the white birch trees around Grand Seiko’s factory in Shizukuishi, a town in a mountainous area of northern Japan. Though it is similar to the dial found on the automatic model, the dial of the SLGA009 is not identical – it has the same silver finish but a slightly different bark pattern. 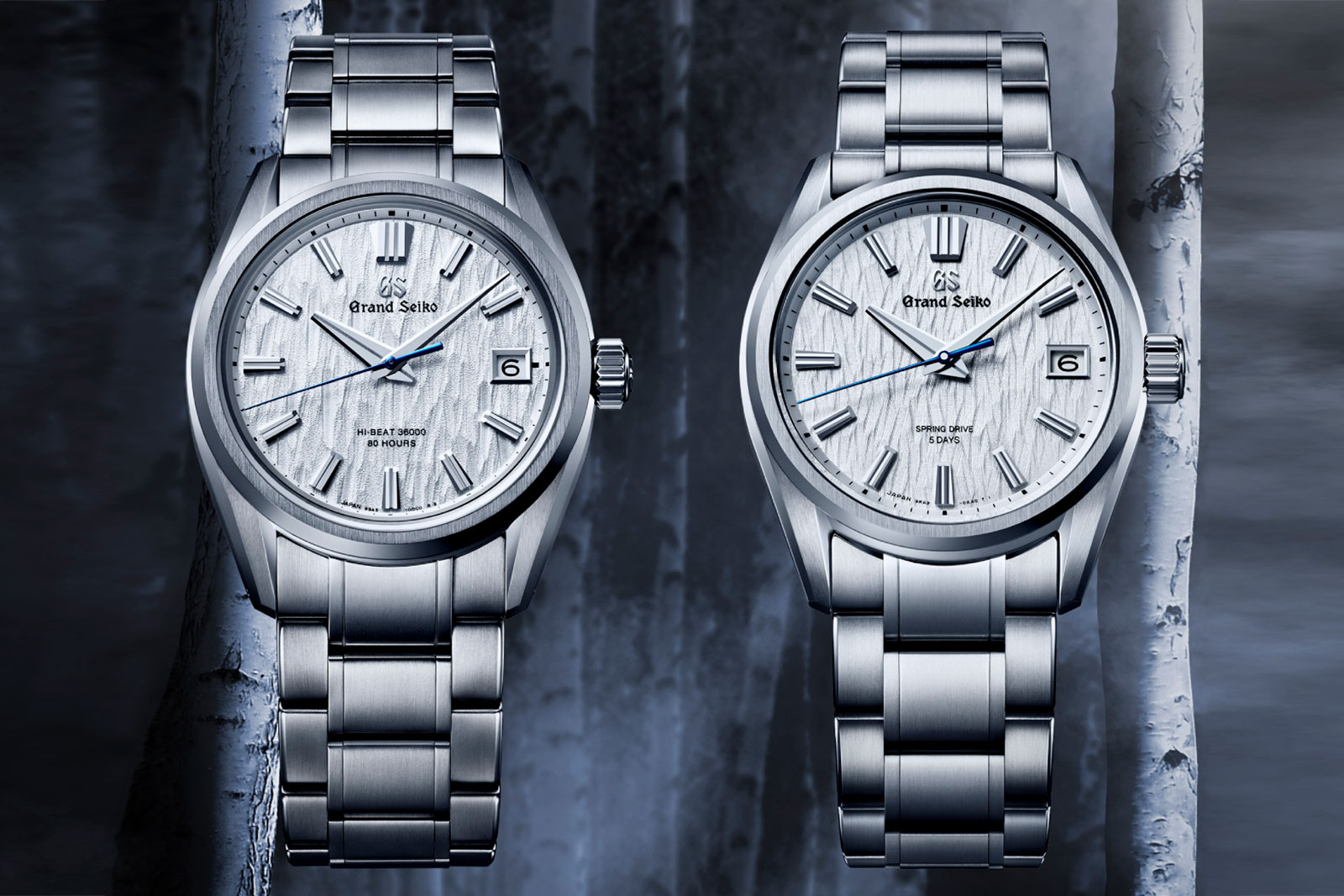 The White Birch as an Automatic (left) and Spring Drive

The appeal of the “glide motion” seconds is enhanced by the refreshing, blue-on-silver dial – especially one that’s uninterrupted by a power reserve indicator, which was historically found on all Spring Drive watches.

The power reserve has been relocated to the back, but the scale still retains its signature linear patterning, a thoughtful detail makes the movement appear more interesting. Compared to the mechanical 9SA5, the 9RA5 is more distinctive in its aesthetic, thanks to a frosted full plate that immediately sets the movement apart from its Swiss or German rivals. 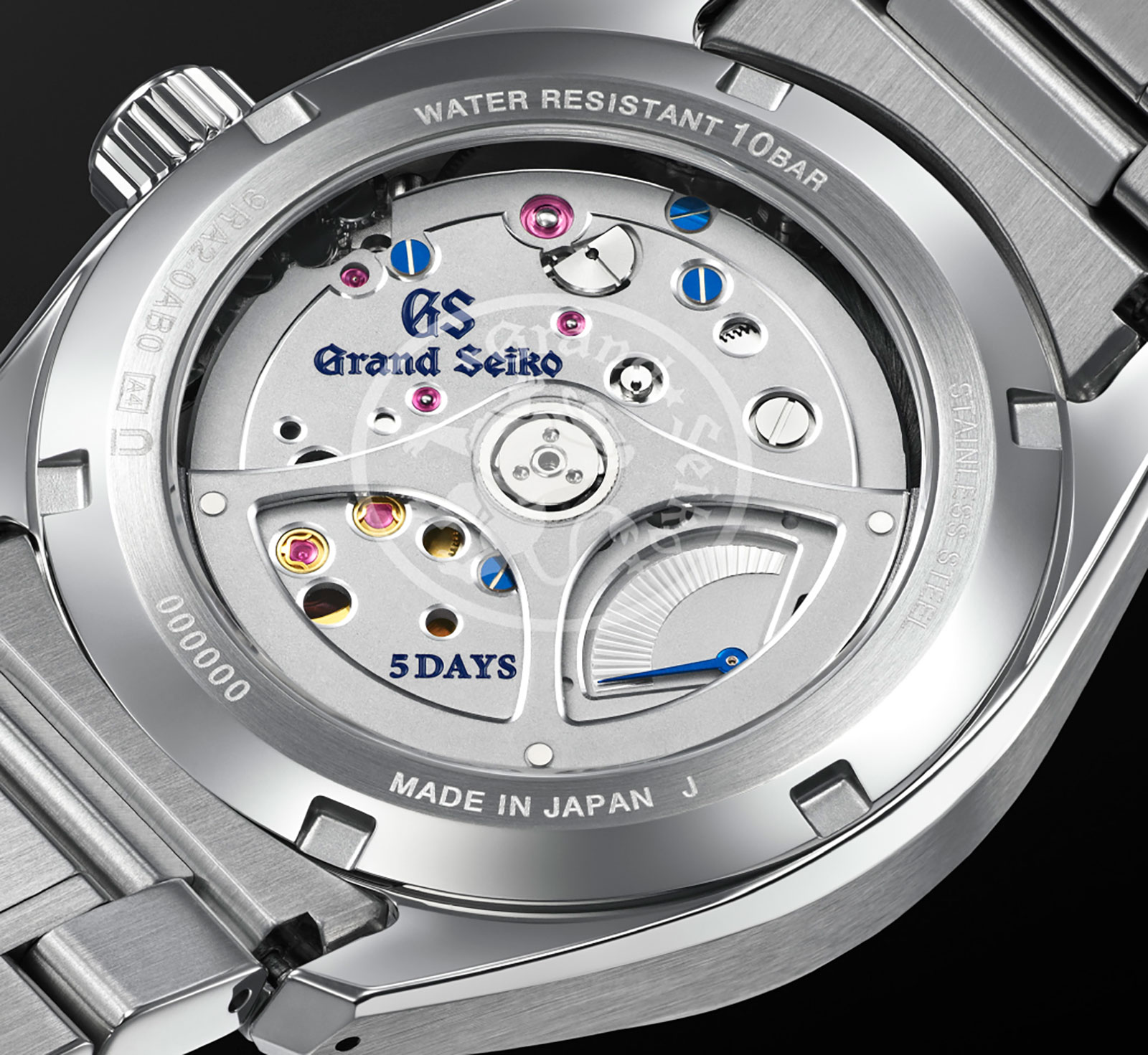 And for watch geeks, the 9RA5 is also appealing for having been designed with thinness in mind. For instance, the movement has twin barrels of different sizes to optimise the utilisation of space within the movement. At the same time, the Magic Lever winding mechanism has been redesigned – resulting in the Offset Magic Lever – to reduce the space it occupies.

Finally, the Spring Drive oscillator of the 9RA5 incorporates a new IC that adopts technology found in Grand Seiko’s top-of-the-line 9F quartz movements. Each IC is individually programmed to compensate for temperature according to its own quartz crystal – which in turn has been aged for three months to maximise its stability of vibration – while the quartz oscillator and sensor are vacuum sealed in a capsule to protect them.

Limited edition: No
Availability: Now at Grand Seiko boutiques and retailers
Price: US$8,600; or 12,626 Singapore dollars