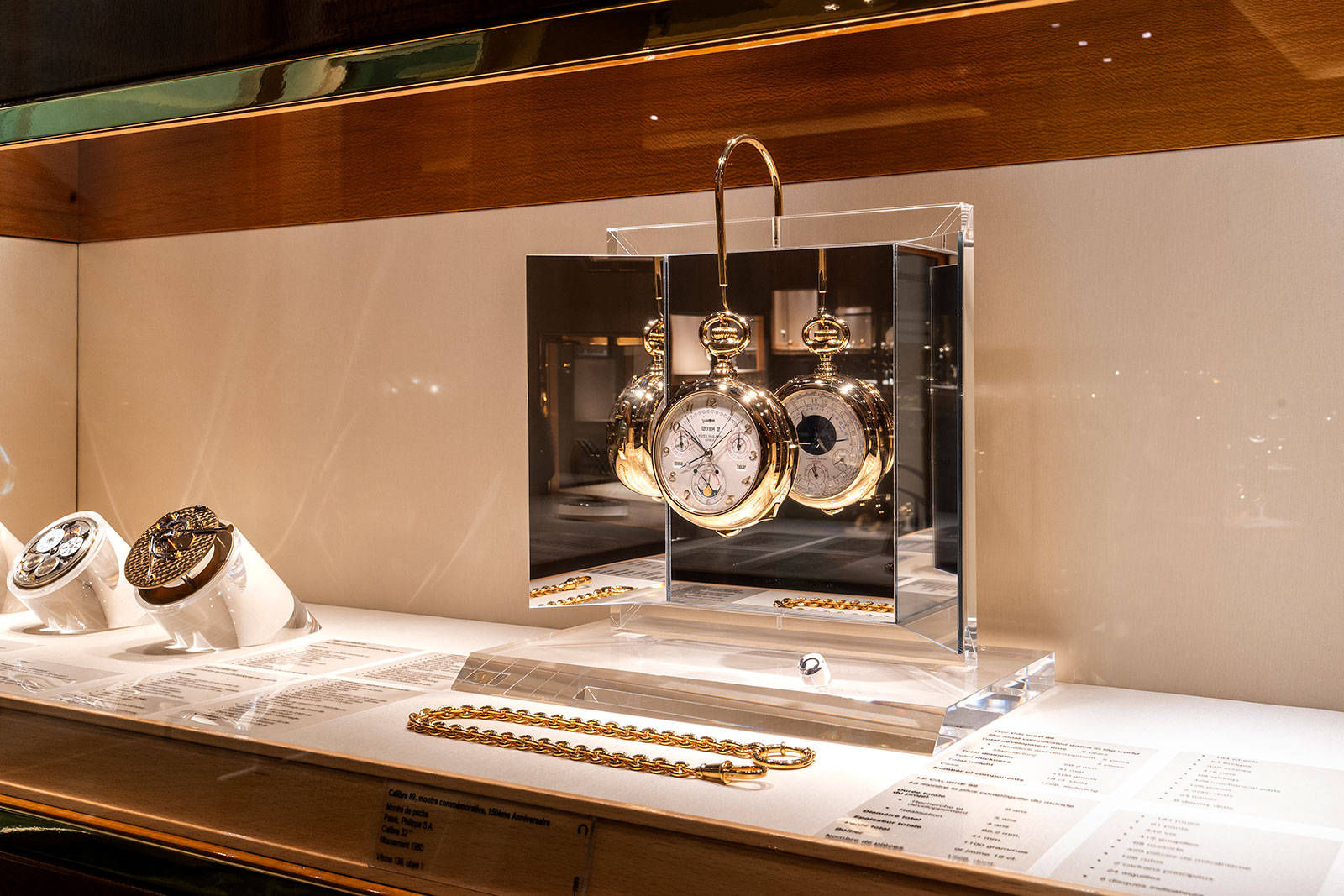 Situated behind Geneva’s Old Town and a 20-minute walk from the watchmaker’s Salon facing the lake, the Patek Philippe Museum is one of the world’s greatest collection of timepieces and mechanical objects. Made up of over 2,500 items, the museum is almost singular in the breadth and depth of its collection.

Started in 1980 by Philippe Stern, then the President of Patek Philippe and father of Thierry, the collection is now overseen by curator Dr Peter Friess. The museum’s collection can falls into two broad categories: the history of mechanical timekeeping in Europe until 1839, and Patek Philippe timepieces from its founding in 1839. One of the prized items in the former category is a 400-year old, enamelled timekeeper by Jehan Cremsdorff, one of the oldest and most perfectly preserved pocket watches known. 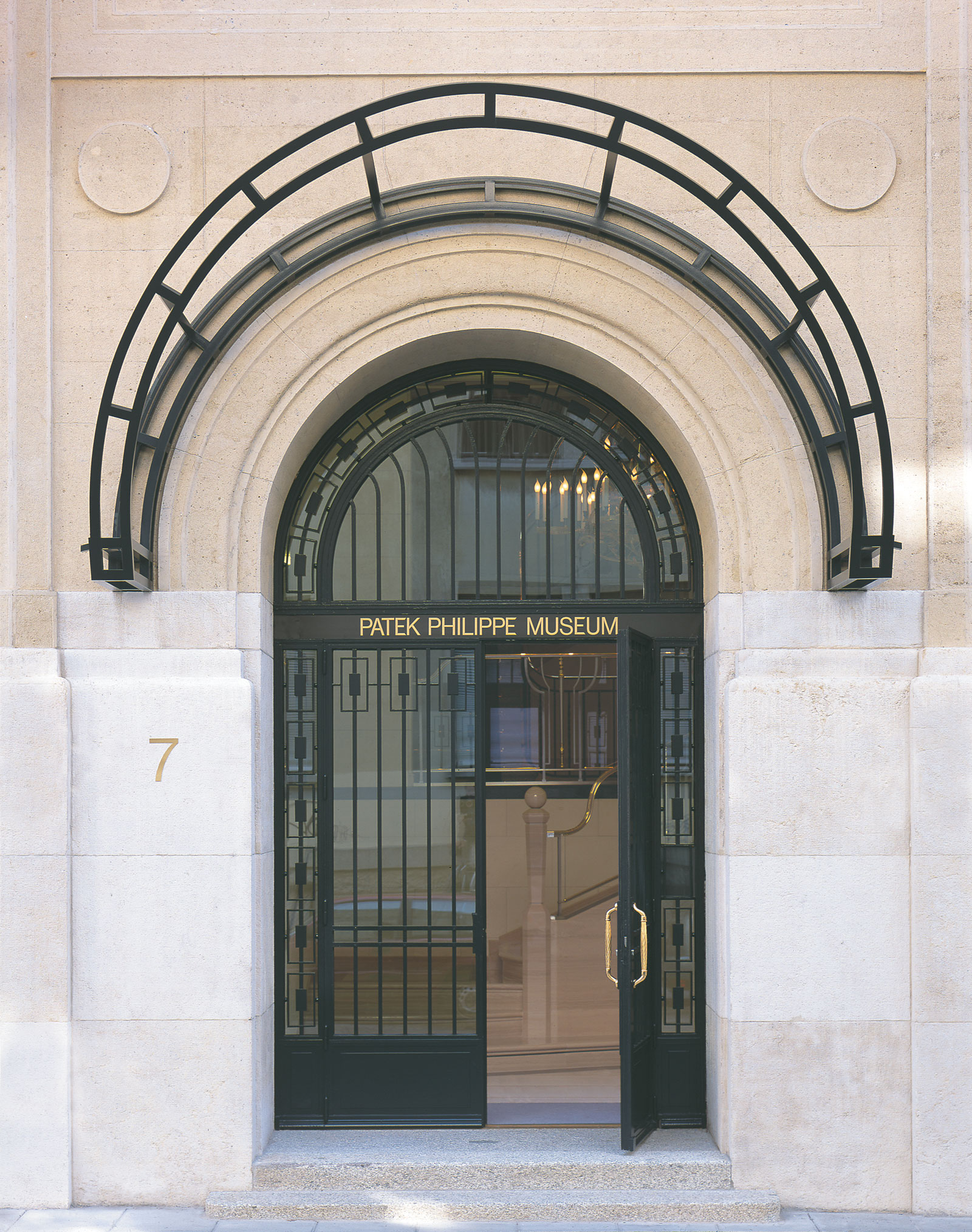 The entrance to the museum, which on a recent Saturday had a line outside across two blocks

Sedate in dark wood and green carpeted floors, the galleries of the museum occupy two floors, with the third floor being an 8,000-book library and a small exhibit dedicated to the Patek Philippe company that includes a reconstruction of the office once occupied by Henri Stern, grandfather of Thierry and father of Philippe. Guided tours are offered, as is an audio guide. Interestingly, the central section of the library is a display of miniature enamel objects – but not incorporating watches – made in Geneva in the 18th and 19th centuries.

Visitors start on the third floor before descending to the second floor, which is home to the Antique Collection of timepieces and objects covering the history of mechanical timekeeping. Amongst the highlights here are the ornately enamelled paired watches made for the Chinese market in the 19th century as well as magnificent Breguet timepieces, including the Duc d’Orléans Sympathique clock. 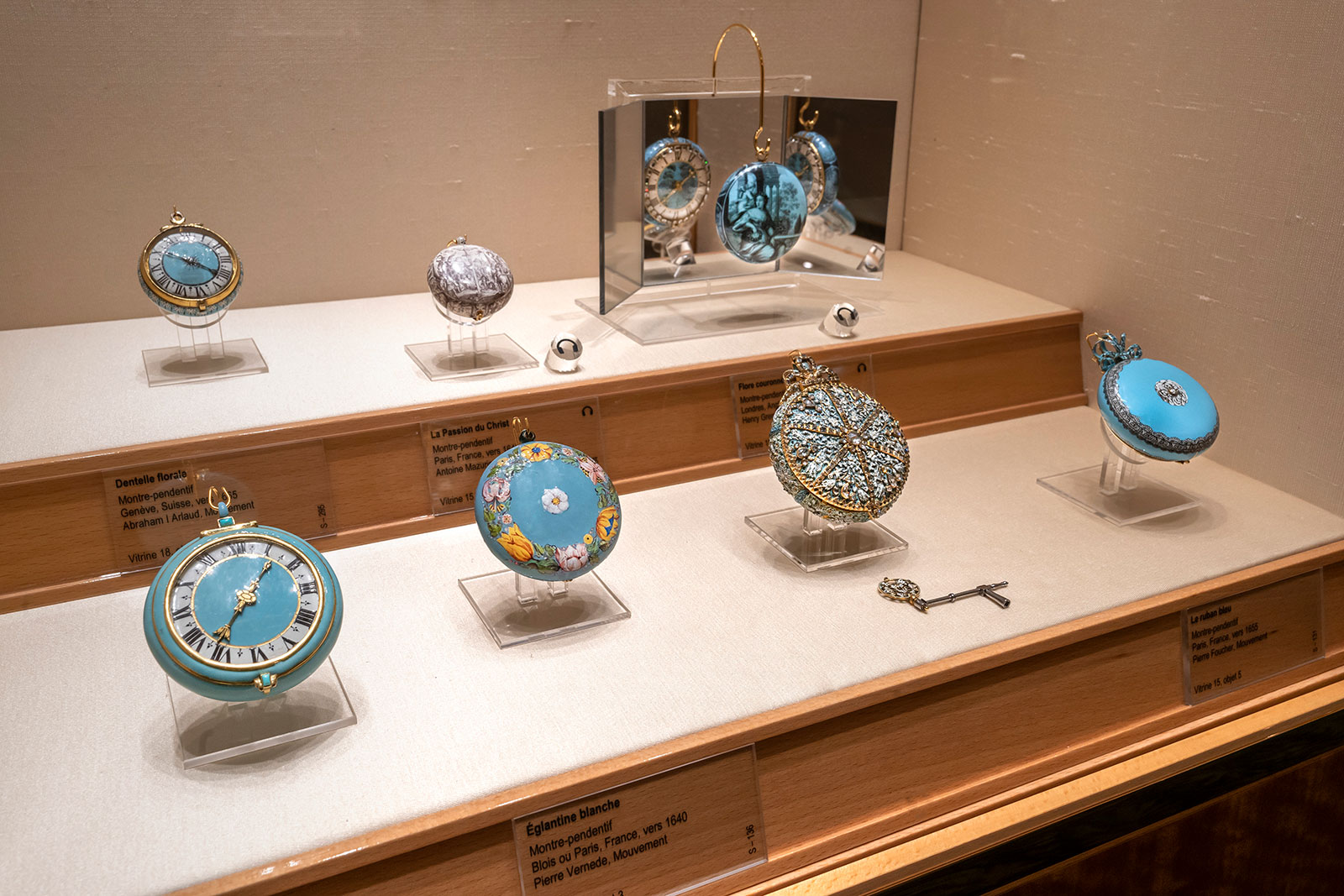 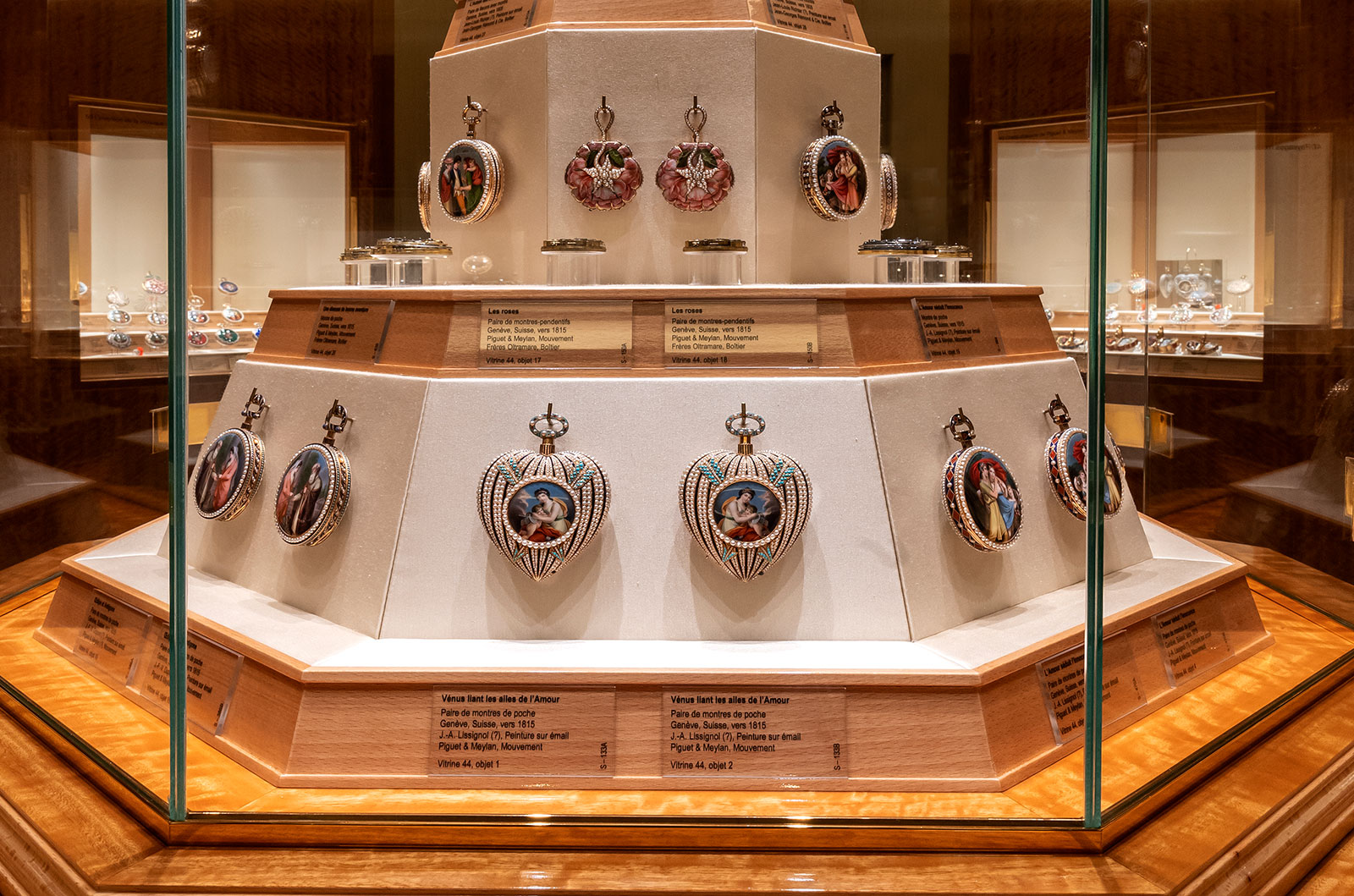 Paired watches for the Chinese market

And on the first floor is the Patek Philippe Collection, a stellar line up of some of the firm’s most famous and significant watches, including world time wristwatches as well as timepieces once owned by royalty. And also on show are the pair of desk clocks made for James Ward Packard and Henry Graves Jr. that inspired the Only Watch 2021 desk clock.

Another highlight are pocket watches decorated with miniature enamel that were made in the 20th century by famed enamellers like Carlo Poluzzi and Suzanne Rohr, the contemporary counterparts to the enamelled objects found on the third floor. 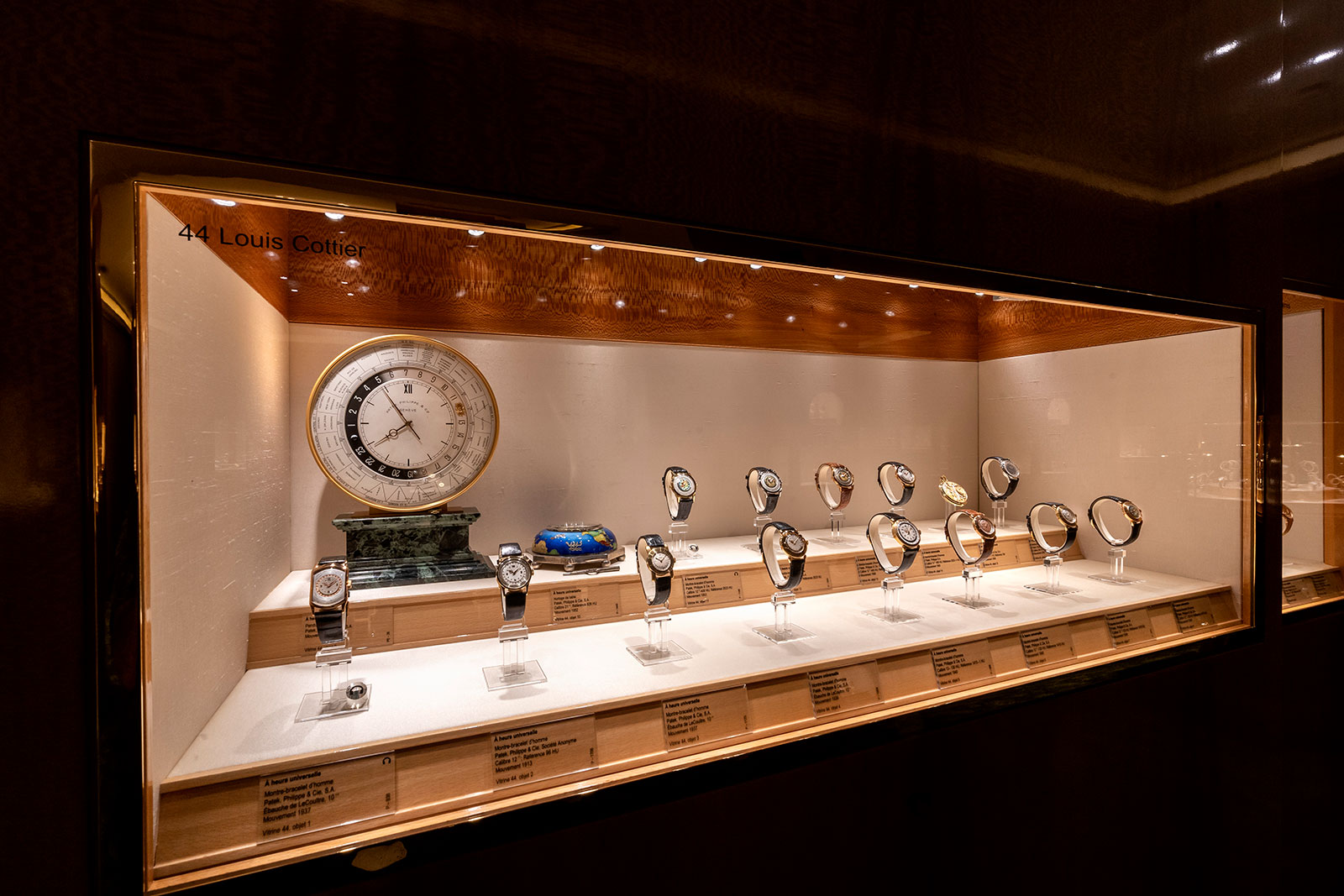 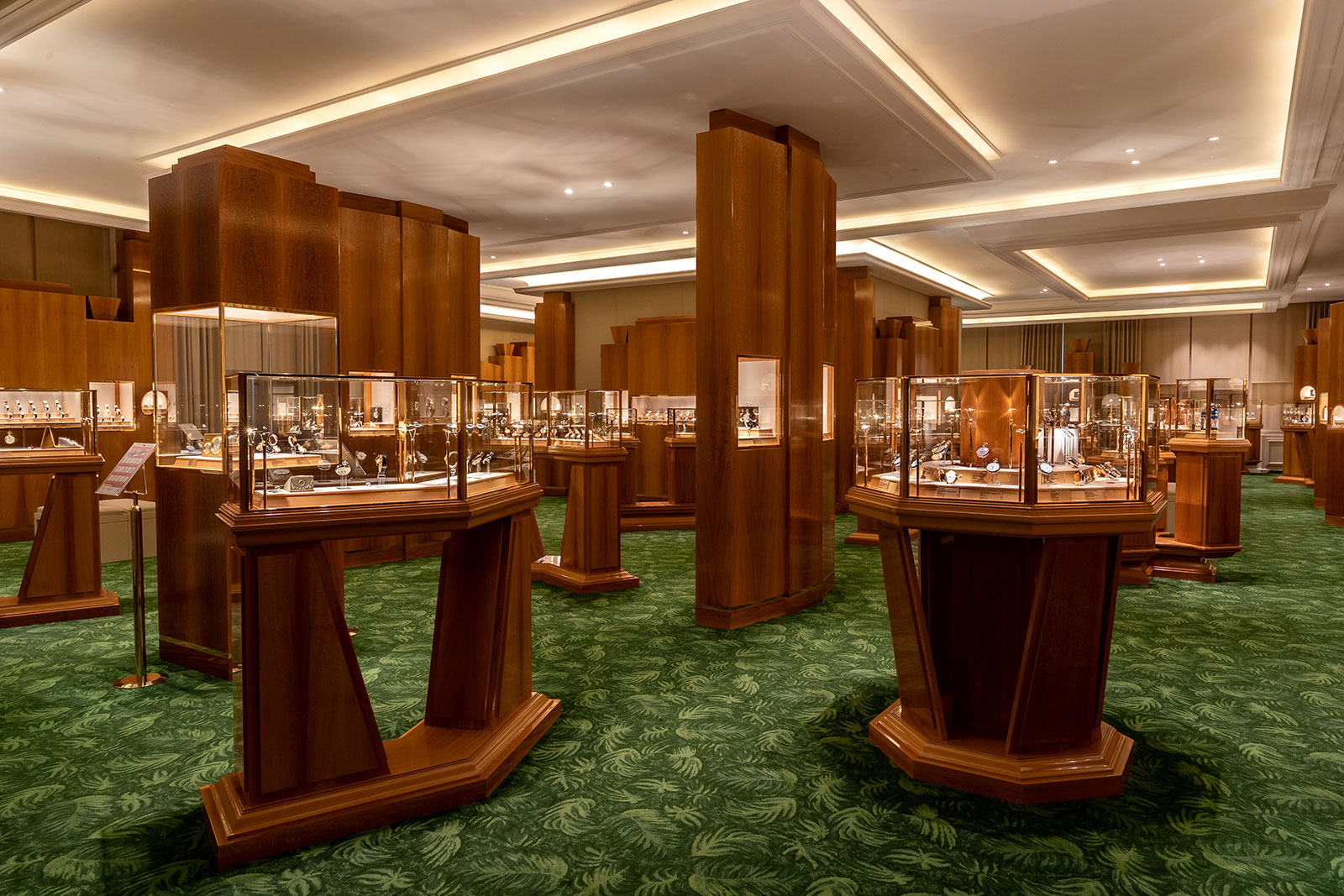 Though the collection that resides within it was started in 1980, the museum building itself was inaugurated in 2001. Previously the premises of jeweller Ponti Gennari, the building was acquired by Patek Philippe in 1975 to accommodate Ateliers Réunis, its subsidiary that produced cases, bracelets, and jewellery.

After Patek Philippe consolidated most of its manufacturing facilities into a factory at Plan-Les-Ouates in 1996 (which was replaced last year by a monumental 10-story building of over 1.5 million square feet), the former Ponti Gennari building was renovated and enlarged with an additional floor on top, transforming it into the Patek Philippe Museum. 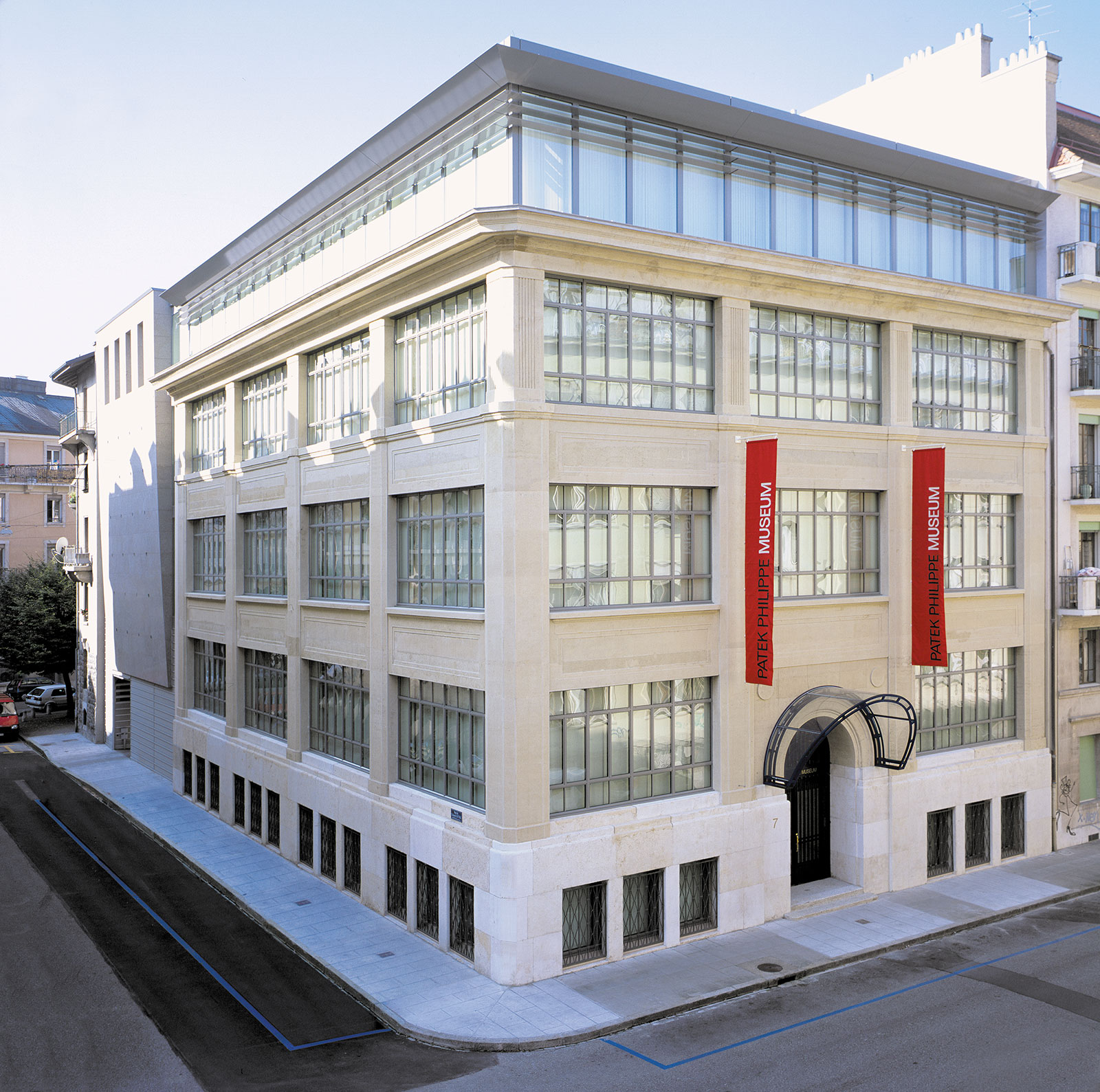 To mark the anniversary, the museum is also releasing new publications covering its collections. The first is an updated catalogue of its antique timepiece collection that will include all recent acquisitions, which replaces the 2016 edition. This will be available in 2023.

And next year the museum will launch a pair of general-interest publications, each 100 pages long and available as a set or separately. One will be dedicated to the Patek Philippe collection and the other to the antique timepieces, with each a limited print run of 10,000 copies. 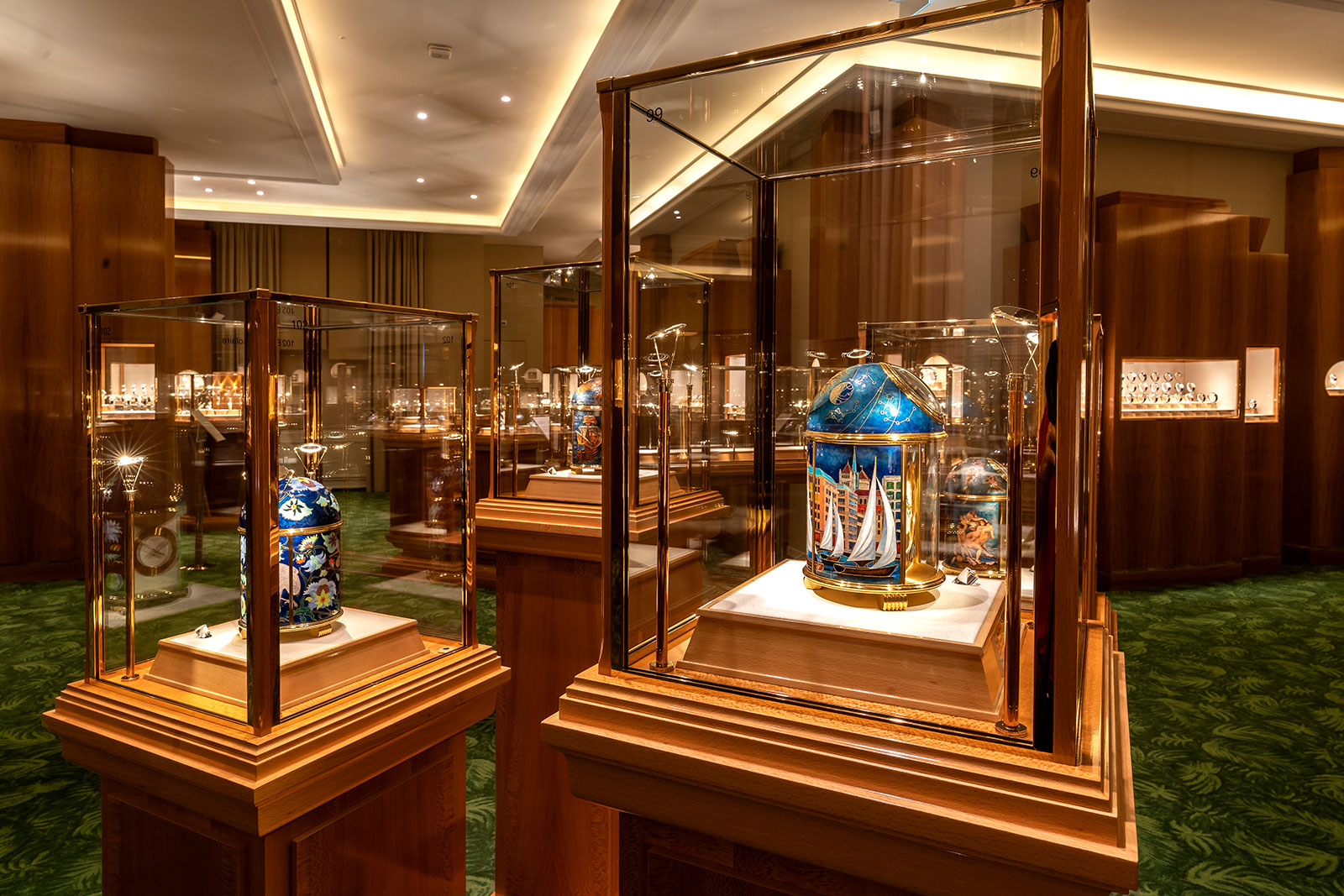 One of the key timepieces of Patek Philippe’s 20th century history, the Dome Clock, shown here as a pair decorated in cloisonné enamel

Tickets:
Adults – CHF10
Seniors, the disabled and unemployed, and students aged 18-25 – CHF7
Admission is free for children and teenagers under 18