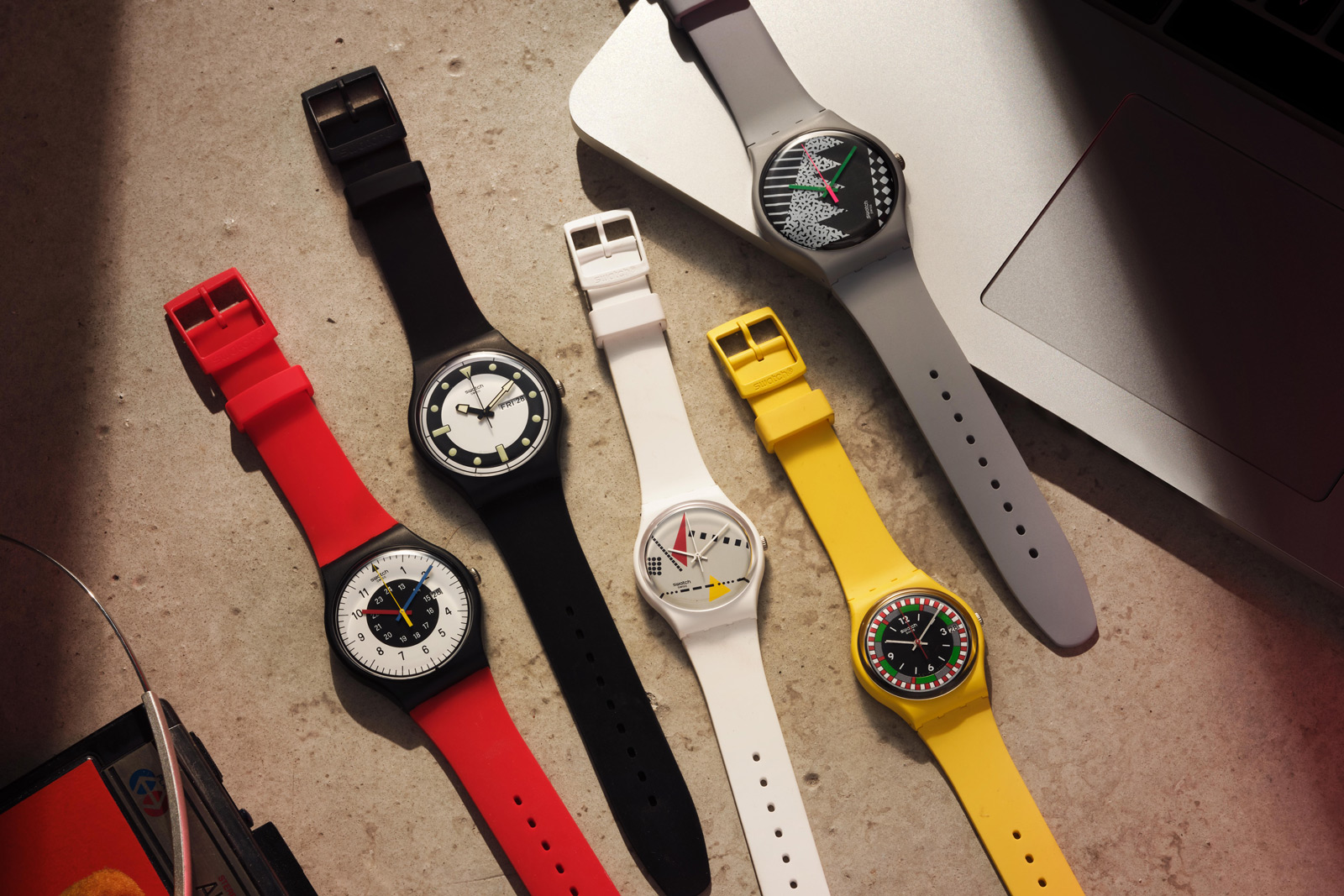 Launched in 1983 – with the driving force behind its conception being Ernst Thomke, the then-chief of movement manufacturer ETA – Swatch set out to be the antithesis of the traditional Swiss-made watch. Cased in plastic and quartz, the Swatch watch was cheap, cheerful, and vividly colourful.

But it was a hit, with its unusual, funky styling making the Swatch a fashion statement – a million watches were sold in the first year. To celebrate the occasion, Swatch constructed a 13-tonne, 162 m-long mega-watch and hung it from the front of the Commerzbank skyscraper in Frankfurt. 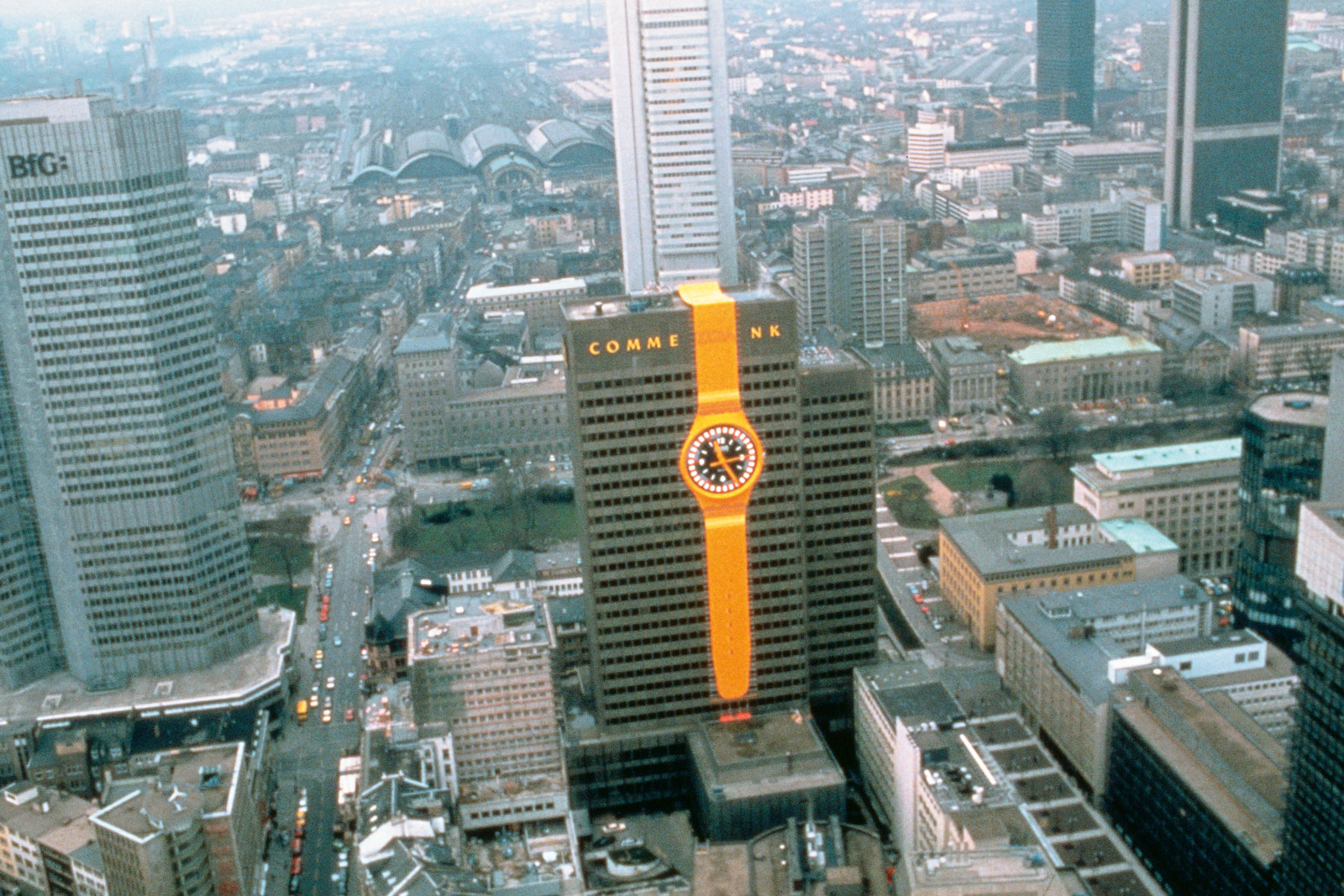 A homage to London’s Big Ben, the giant clock was a brilliant publicity stunt that boldly announced the ambitions of Swatch. The oversized watch indicated the time and three pieces of information: “Swatch”, “Swiss”, and the retail price of “DM60”.

Now Swatch is remembering 1984 with a quintet of watches, each a recreation of the year’s bestsellers, but with a twist. Instead of plastic as the originals were, the remakes have cases of Bioceramic, while the straps are made of bio-sourced plastic – making the entire watch a little friendlier to the environmental than the 1980s originals.

Given the diverse and imaginative offerings at Swatch, it’s unusual for the company to reissue vintage watches, though it’s done a couple in the recent past.

Interestingly, the 1984 collection resonates with the broader, luxury-watch market, which frequently returns to past hits for easy remakes. Such watches appeal to the enthusiasts who appreciate the nostalgic look backwards, combined with the quality and materials of modern manufacturing. Swatch has essentially done the same by reviving old design in the scratch-resistant Bioceramic case. 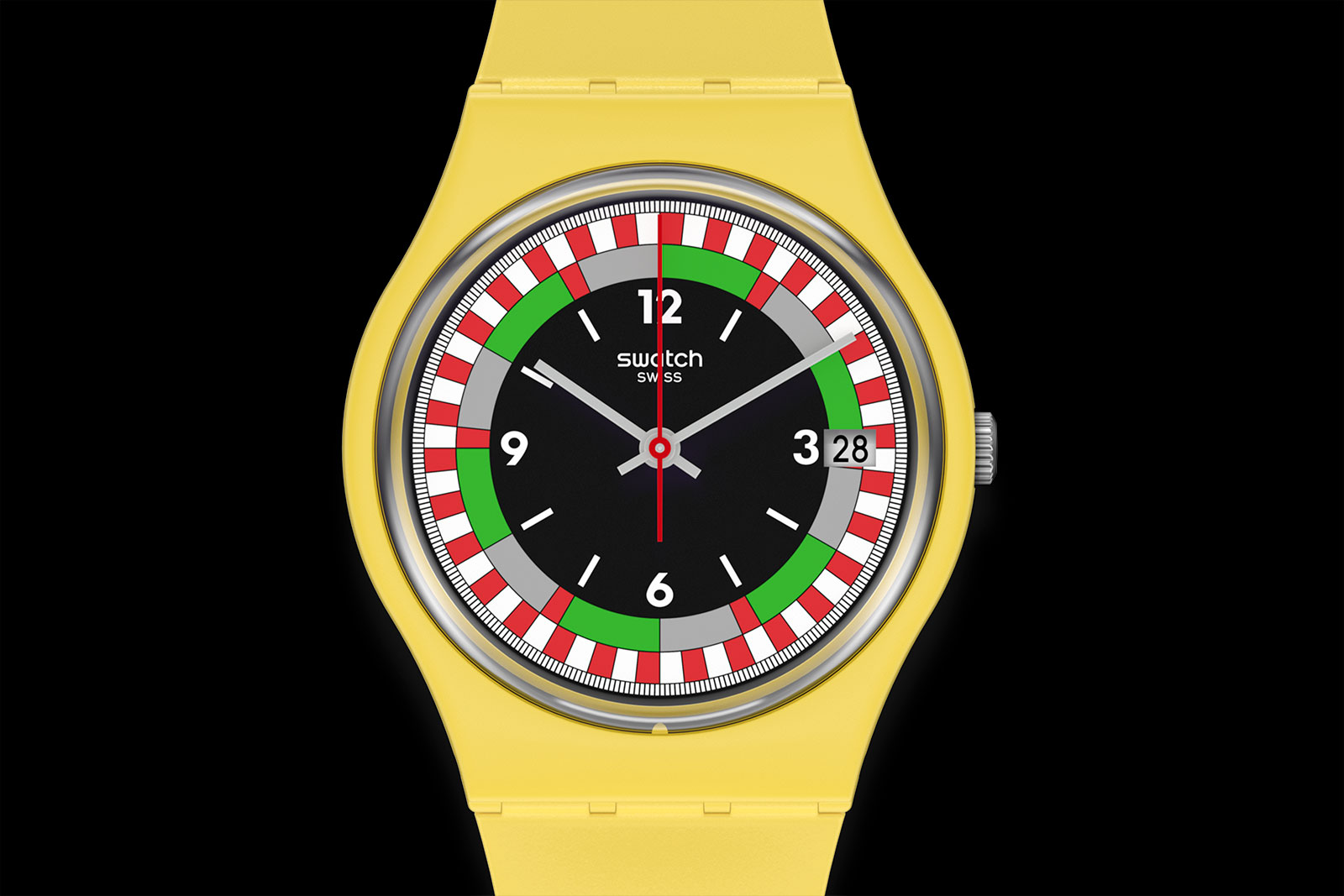 But because Swatch has been consistent in styling since its founding, the 1984 remakes can pass as a modern-day design. They look suitably current, but some have more vintage vibes than the others thanks to their colours, namely Yel_Race and Rouge & Noir.

Overall the 1984 watches preserve the look and feel of the vintage originals – with the Black_Div and Yel_Race being the most striking – but some of the designs are compromised by modern conveniences, namely the addition of a date that sits awkwardly as a result of a larger case.

Three of the 1984 watches feature a date, and one even indicates the day, but the calendar works better on some dial designs than others.

First is the Rouge & Noir, a model originally known as Chrono-Tech in 1984. It’s not chronograph – khrónos means “time” in ancient Greek – but a watch with an aviator-style dial that has twin hour tracks in both 12- and 24- hour format. The stark black-and-white dial is lightened up with tri-colour hands as well as a red strap.

But the design is let down by a date window that sits too far from the edge of the dial, a result of the small movement inside the large, 41 mm case. 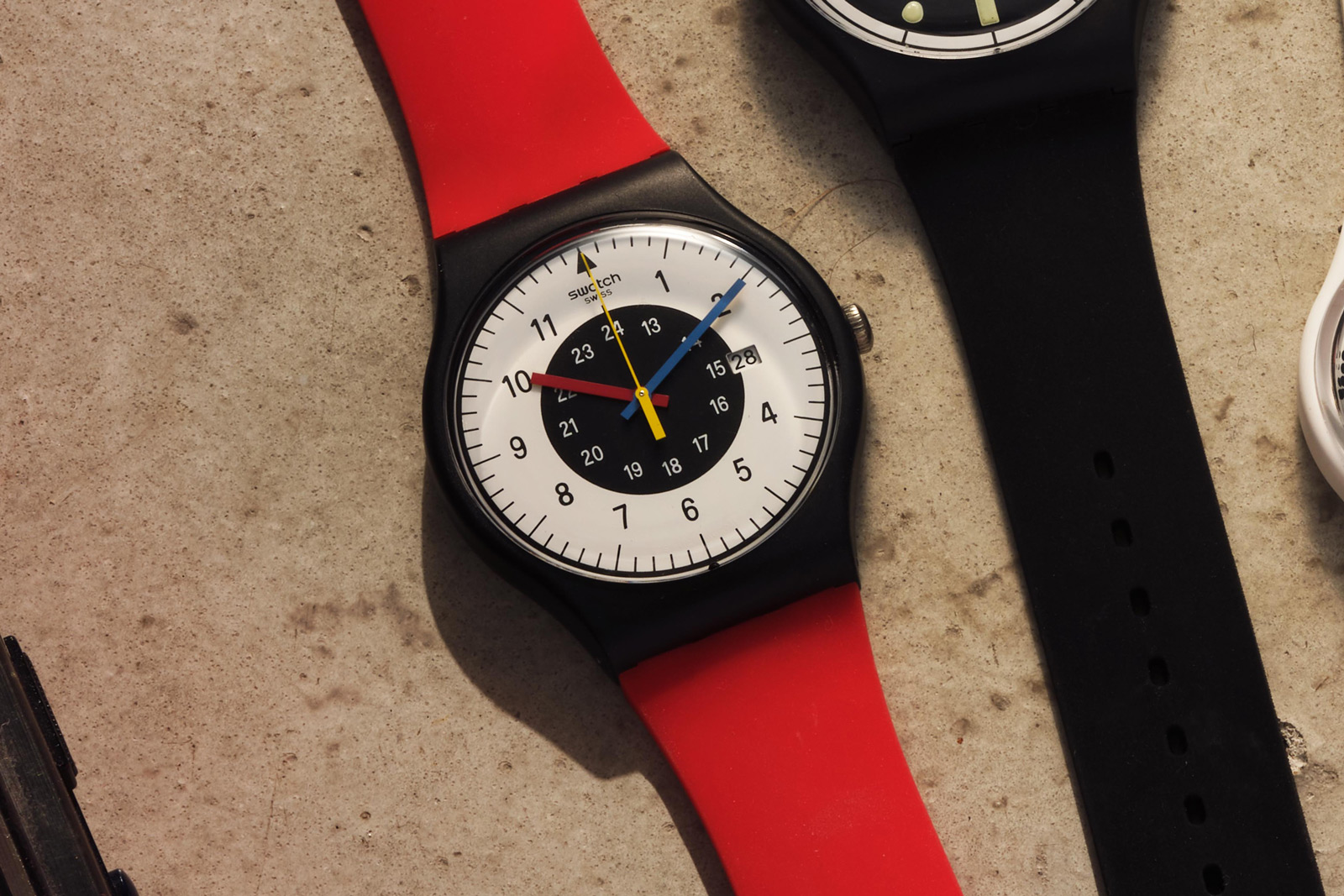 Also featuring a date but better proportioned is Yel_Race, a smaller watch at just 34 mm, explaining the improved position of the date. That said, Yel_Race would have been perfect absent the date window, as the original Yellow Racer was.

Despite being smaller, it’s a bold, striking watch. Yea_Race combines a yellow case and strap with a slightly hypnotic dial that calls to mind a roulette wheel. 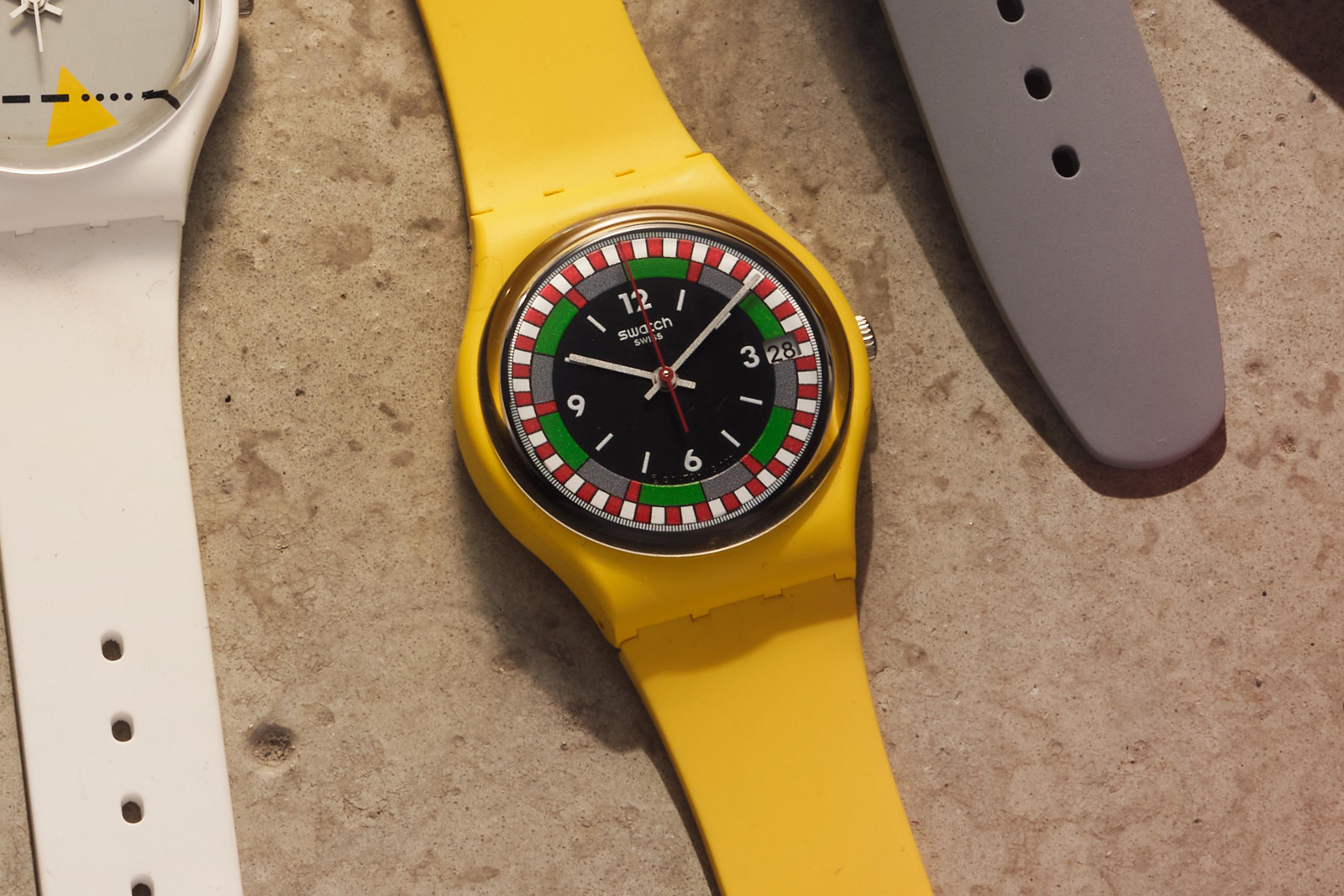 The final watch with a calendar is Bla_Div, a functional diver’s watch with a day-date display, a feature found on the vintage original.

The watch gets its name from the wide chapter and luminous markers that evoke the typical dive watch dial – a feature that also helps camouflage the calendar, which nestles against the chapter ring. 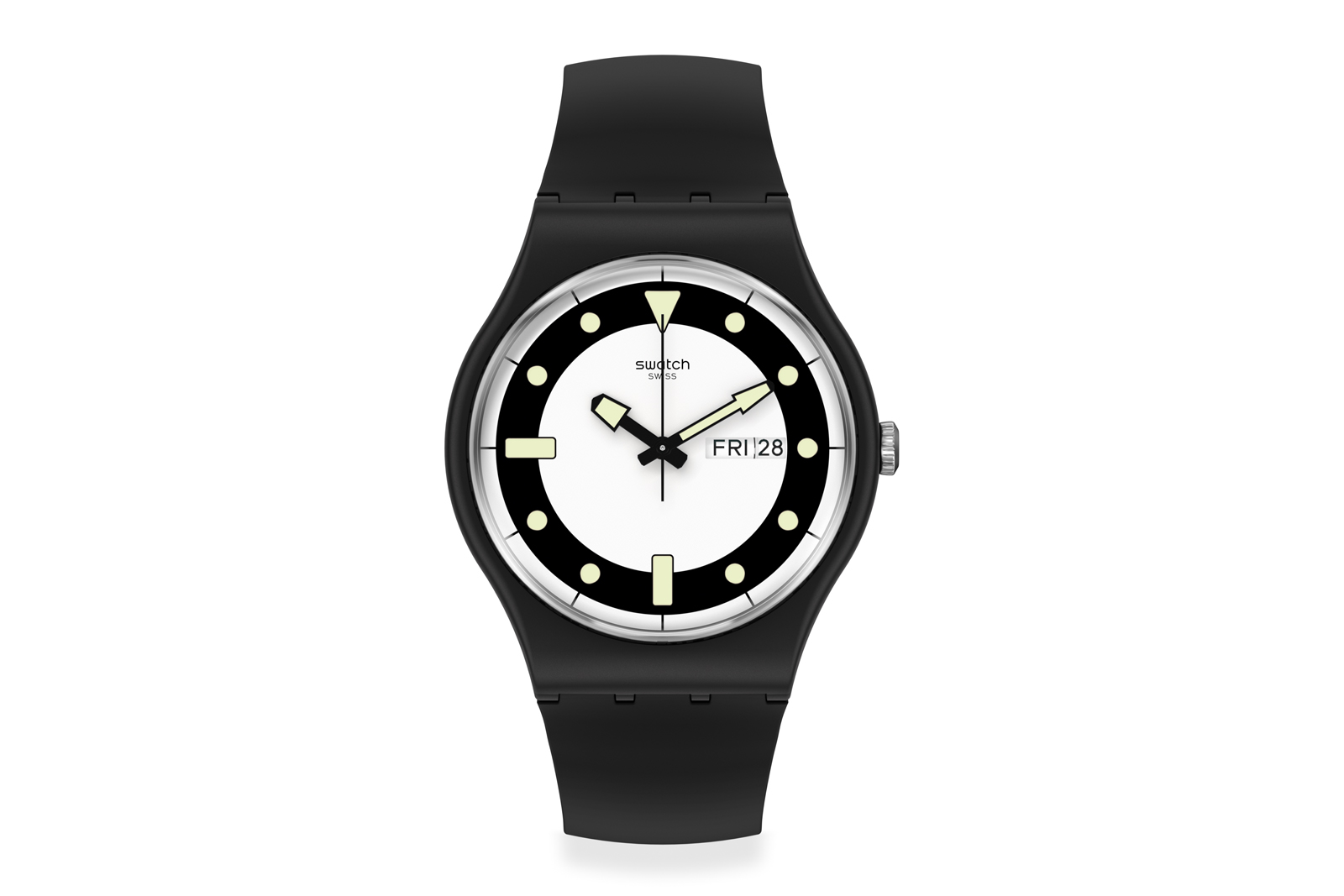 The two final watches are inspired by the Memphis Group, a design movement of the 1980s led by Italian architect Ettore Sottsass. Characterised by bright colours and radical geometric shapes, Memphis is event on the dial of the namesake 1984 watches.

Neither of the twin Memphis models have markings on the dial, never mind a date, leaving the abstract dial motif uninterrupted. 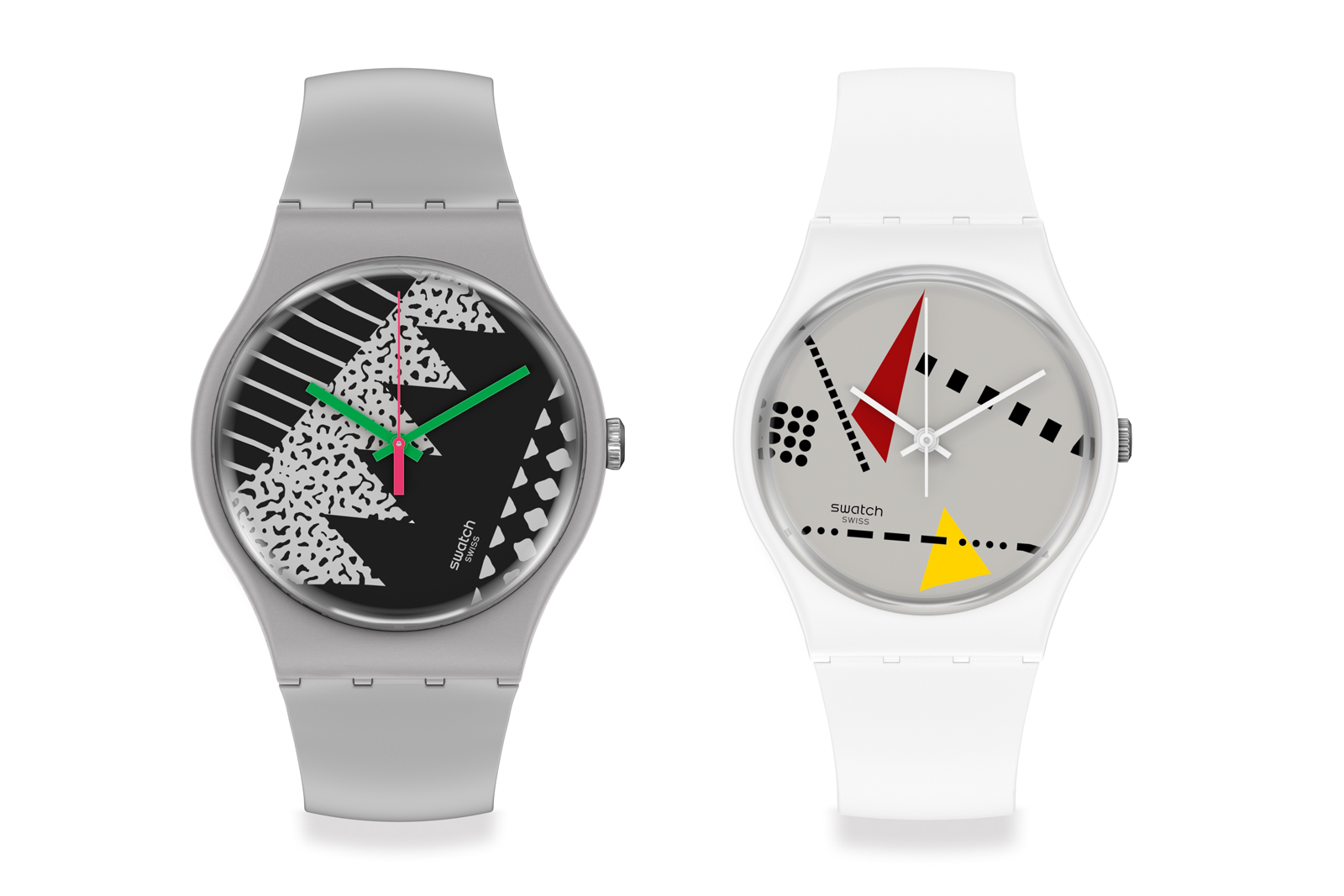 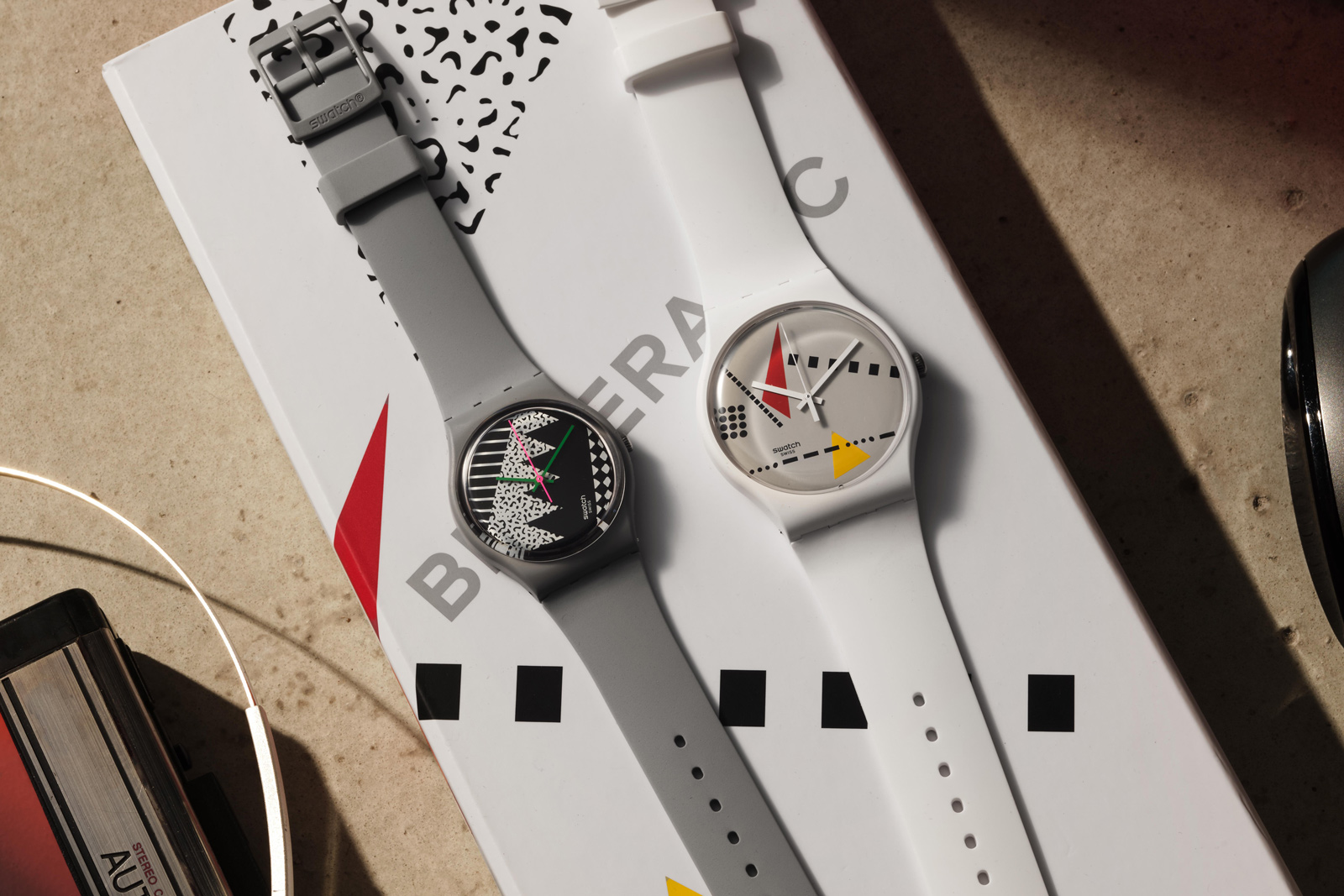 The Memphis set with the cases and colours inverted