Inspired by uncommon 1950s wristwatches that have long been a favourite of mine, the Erwin “Star” was almost three years in the making – my first email to Habring² was dated February 2019. It took longer than expected to realise, but I am proud of the result. 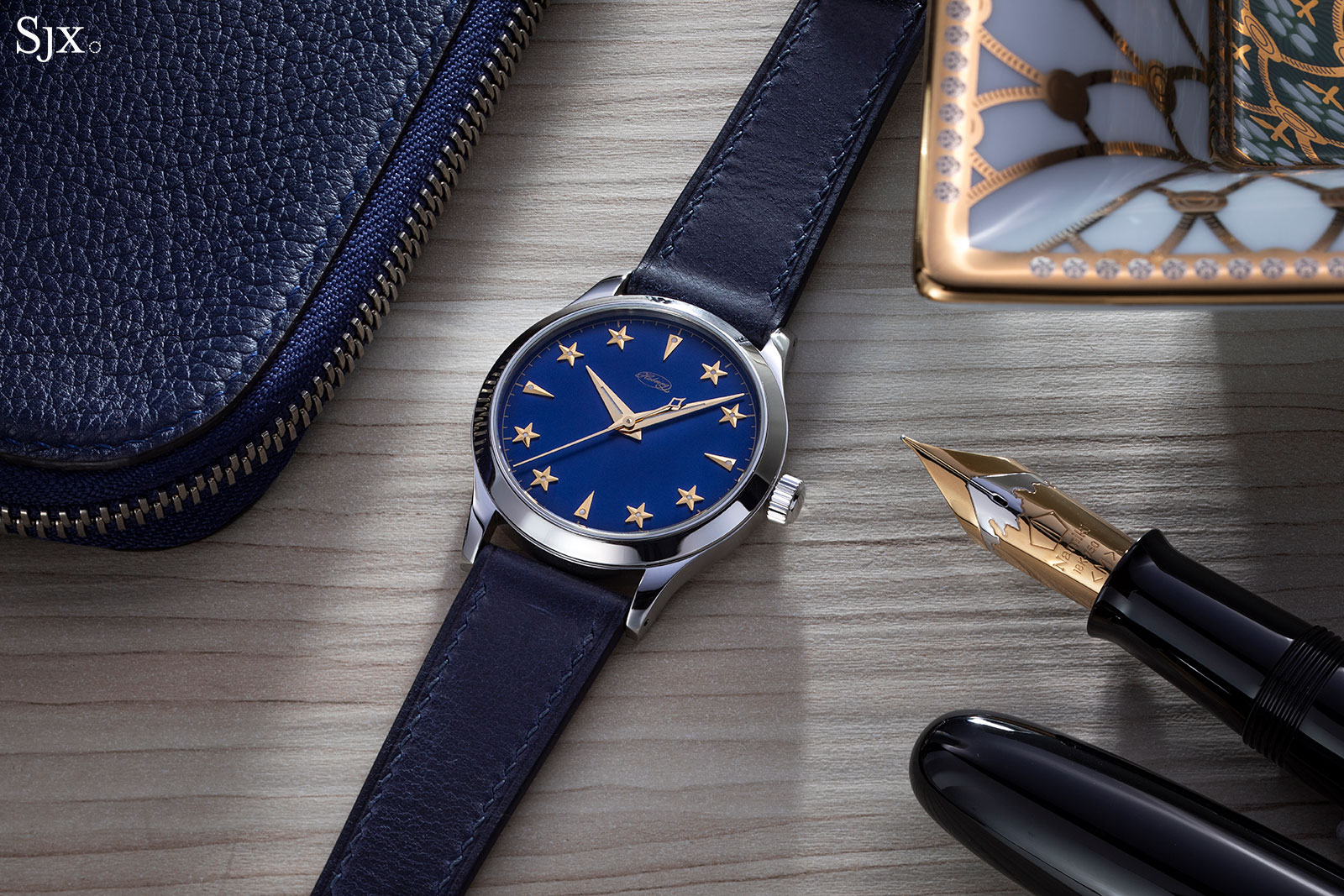 The genesis of the idea came to me a decade ago, when I first encountered the 36 mm “Japan Limited” that Habring² created for Shellman, a storied retailer of vintage timepieces and independent watchmaking in Tokyo. More recently, Habring² applied a similar formula to the Erwin LAB02 for Massena Lab.

In the time since, I got to know Richard and Maria Habring, the husband-and-wife team behind Habring², and gained a deep appreciation of the brand uncommon approach to making quality watches accessible while emphasising practical-minded engineering. 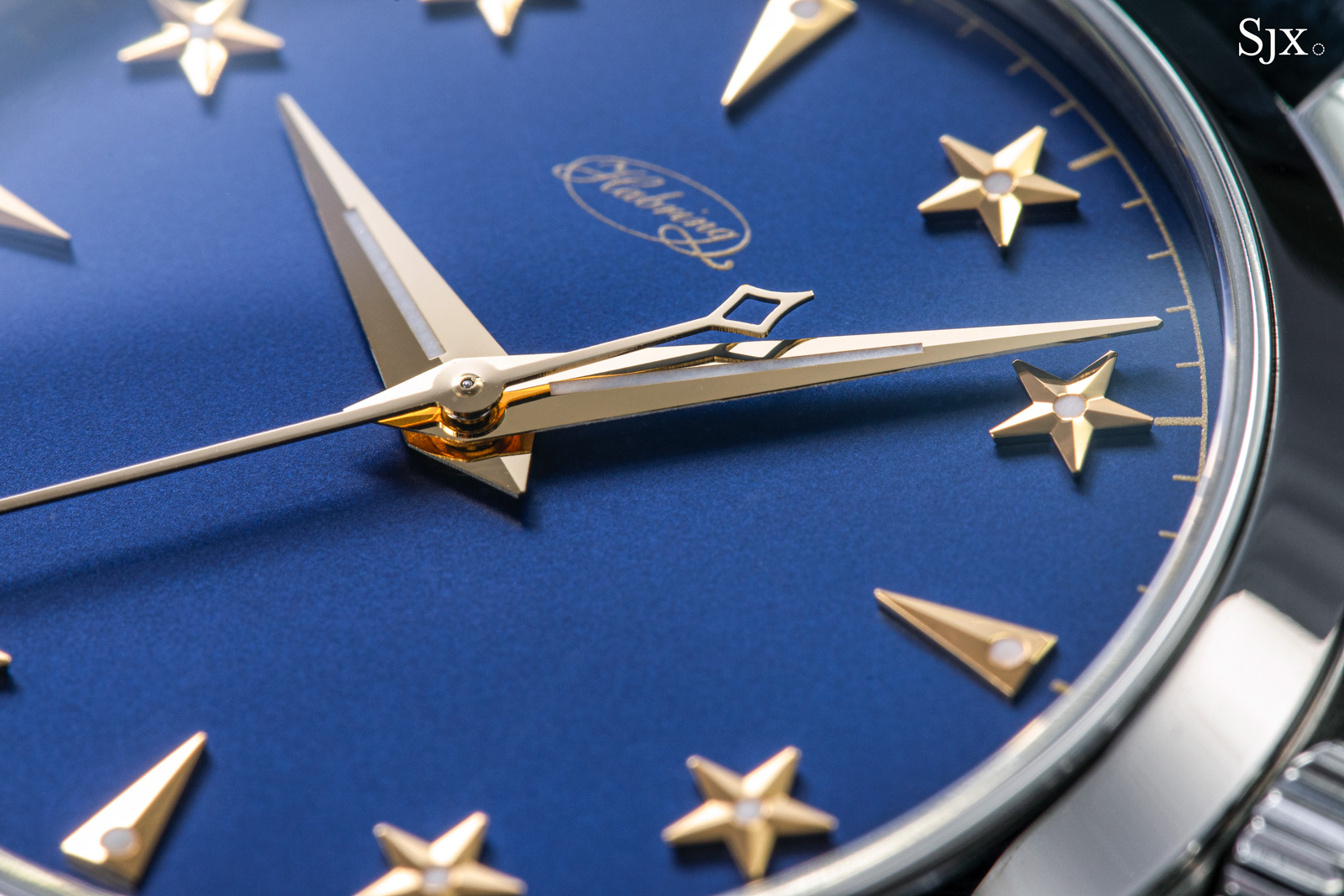 The foundation of the Erwin “Star” is Habring²’s trademark time-only wristwatch. Its proportions are almost ideal at 38.5 mm by 10.5 mm, while the A11s movement within features a jumping, or deadbeat, seconds.

What makes it special – and instantly distinctive – is the “star” dial in a blue that varies with the light.

Watches from the 1950s with star hour markers have long appealed to me. Specifically, it is the Rolex ref. 6088 “Galaxy” that stands out in my memory. Produced in 1951, the “Galaxy” is an Oyster Perpetual with a glossy, black-lacquered dial and eight star-shaped hour markers. 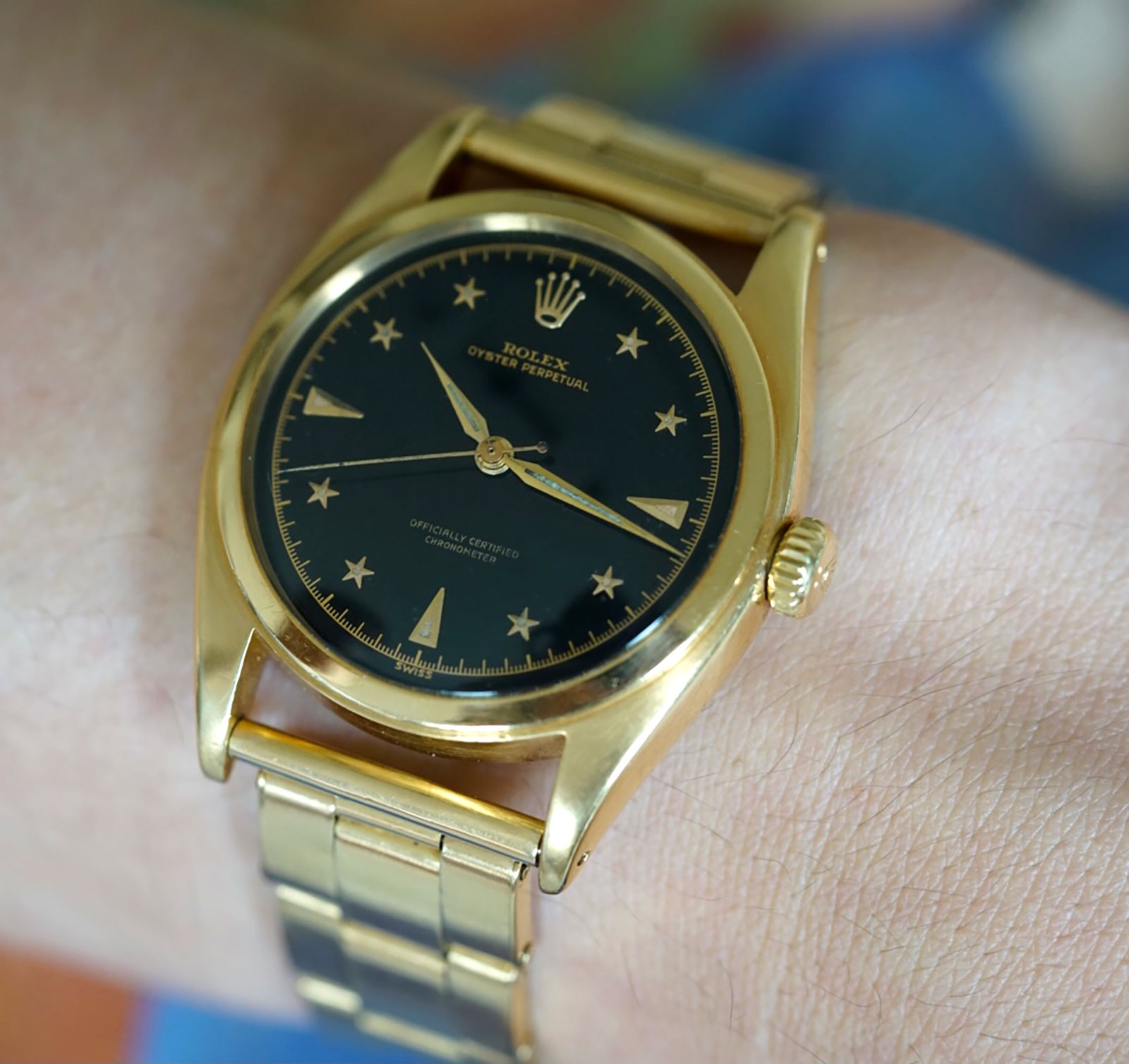 Though the inspiration was a vintage watch, I wanted the Erwin “Star” to be recognisable as a contemporary wristwatch.

So the proportions of the elements on the dial were tweaked, most notably by enlarging the star hour markers and hands. The palette of blue and gold is also modern, and also unusual in a steel watch.

During the development of the design, Habring² and myself had a couple of other interesting ideas for the design, but ultimately chose this as the first. Some of the other ideas are too good to leave behind, so I do plan on editions in the distant future that will be similar but clearly different. 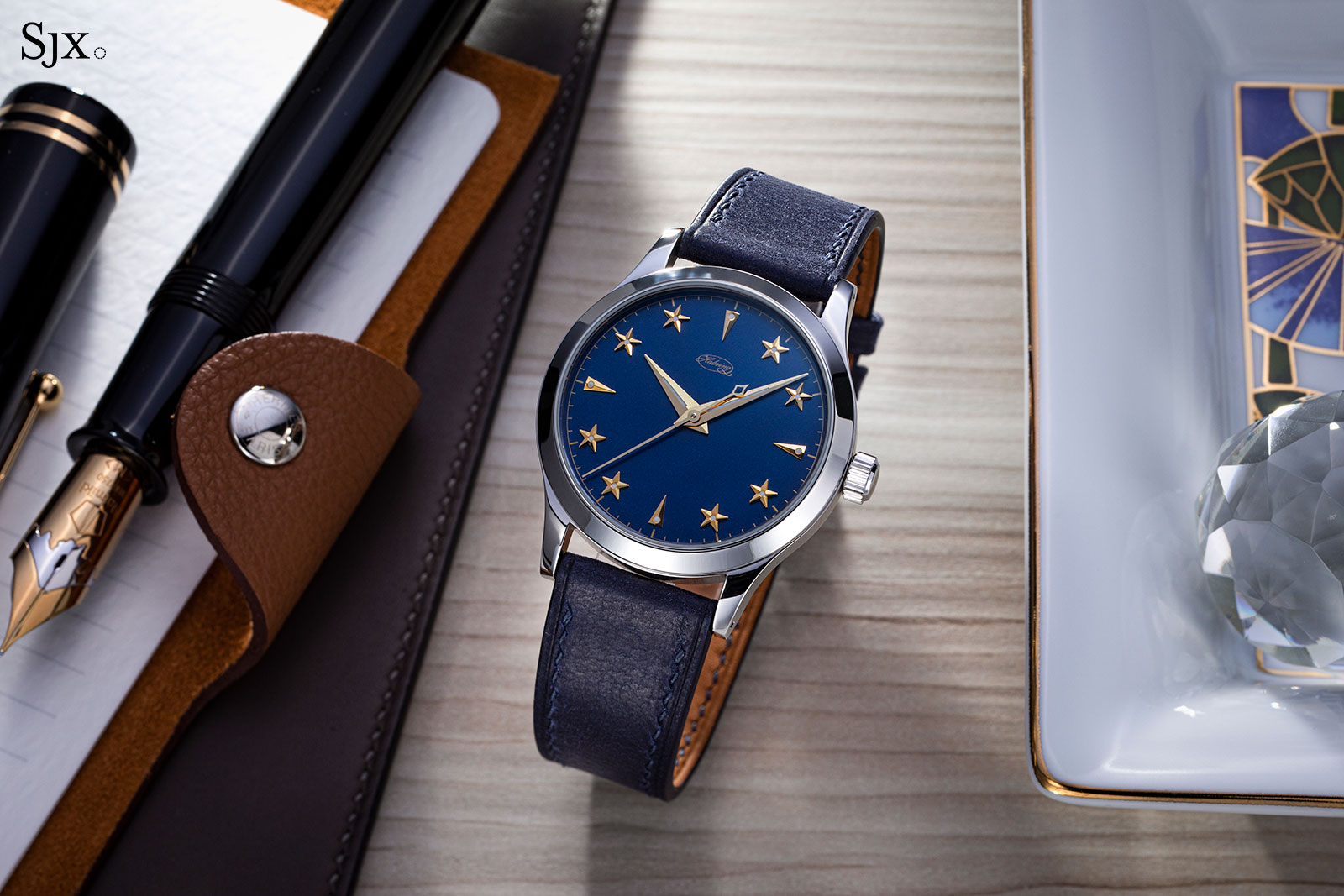 Although there were lower cost alternatives, like printed or adhesive markers, I knew applied markers were imperative.

Made of gilded brass, each star hour marker is stamped, diamond cut, and finally gently polished, giving them a reflective, facetted surface. They are secured the old-fashioned way, with tiny feet that go into sockets in the dial.

As a result, the Erwin “Star” the only wristwatch in the current Habring² line up with applied markers. 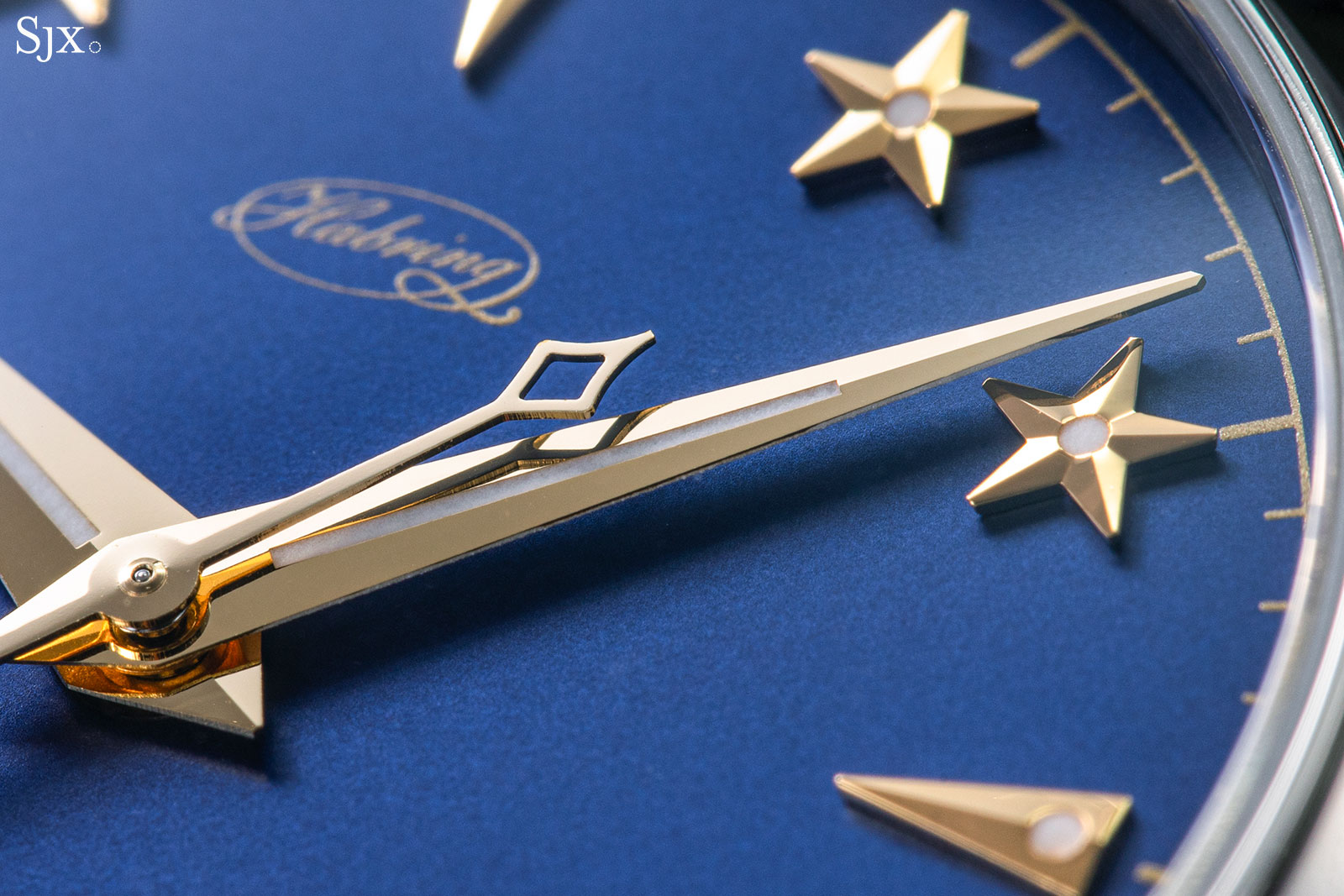 The hour markers are filled with Super-Luminova in their centres

The hands are also stamped and diamond cut, given them a slightly faceted profile. Both the hour and minute hands are dauphine shaped, while the seconds hand is longer than usual for better balance. At the same time, the open-diamond counterweight of the seconds hand just crosses the Habring² logo at 12 o’clock. 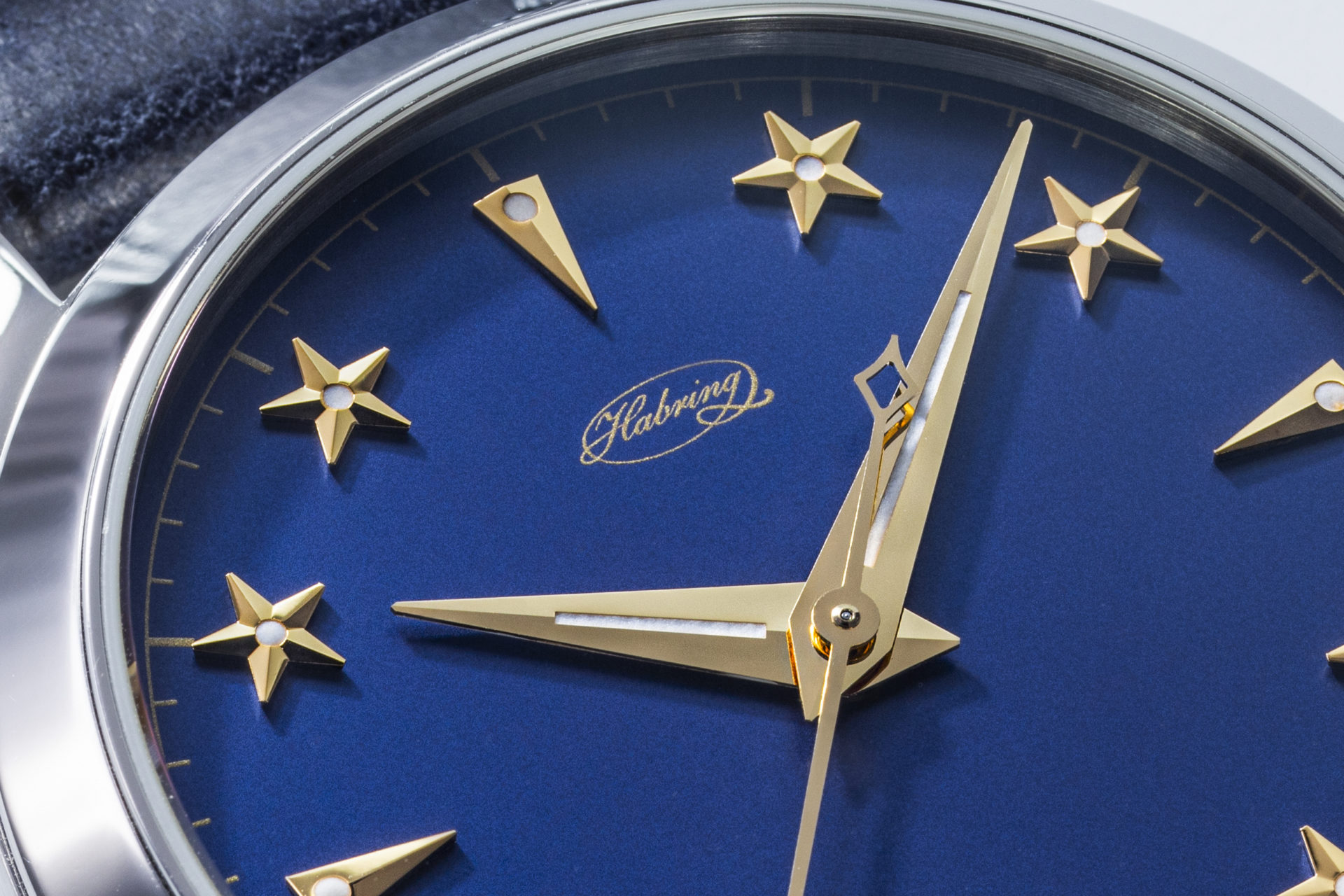 The print on the dial is in gold-powder lacquer, creating a slightly granular finish

And a less obvious detail worth paying attention to are the markings on the case back. I kept it to a minimum, but specified a deeper engraving, rather than the more common shallow etching. I just think it looks better this way. 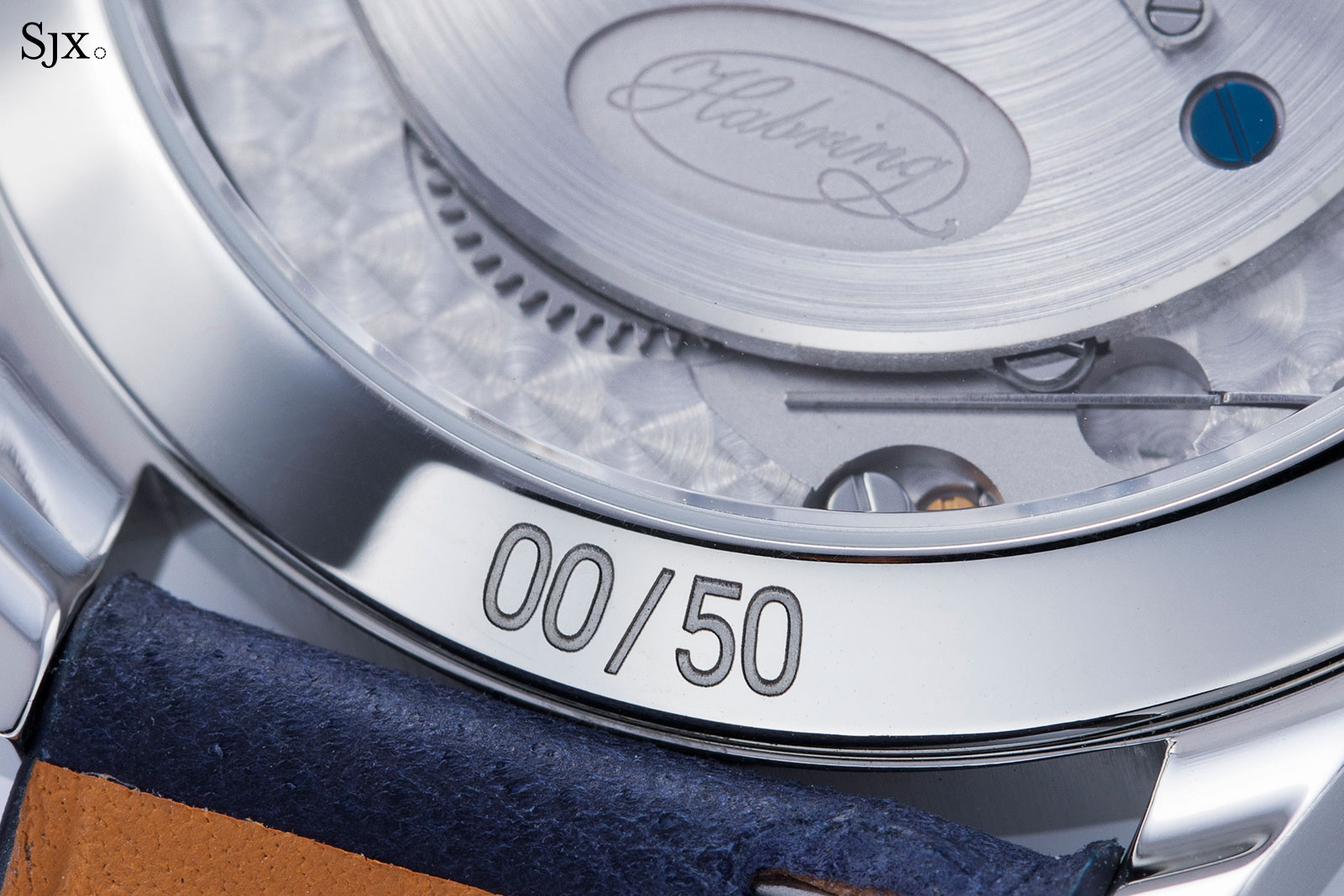 The base of the limited edition is the Erwin, a compact wristwatch with good proportions – 38.5 mm wide and 10.5 mm high.

Inside is the A11s, a calibre developed by Habring² from the architecture of the Valjoux 7750 that’s part of the A11 family. While the A11 shares the basic construction of the robust 7750, it is an entirely different movement – and also a good-looking calibre dressed up with clean, tidy finishing and blued screws. It’s been revamped to preserve the 7750’s legendary reliability, while being upgraded in almost every other respect.

Amongst other things, the A11 uses a lateral-screw regulator index instead of Etachron, while all its lever, springs and other slender components are laser cut, instead of being stamped. I detailed all of the A11’s features in a 2018 article about the Felix that’s powered by the single-button chronograph version of the A11. Priced at US$7,580 or 9,980 Singapore dollars, the Erwin “Star” is a limited edition of 50 numbered watches, along with one prototype. They will be delivered progressively in batches from now until end September.

To buy one, please let us know via the expression-of-interest form. Limited edition: 50 pieces
Availability: Progressive delivery in batches from now until end September 2021
Price: US$7,580; or 9,980 Singapore dollars (Inclusive of shipping; buyers are responsible for respective local and import taxes)