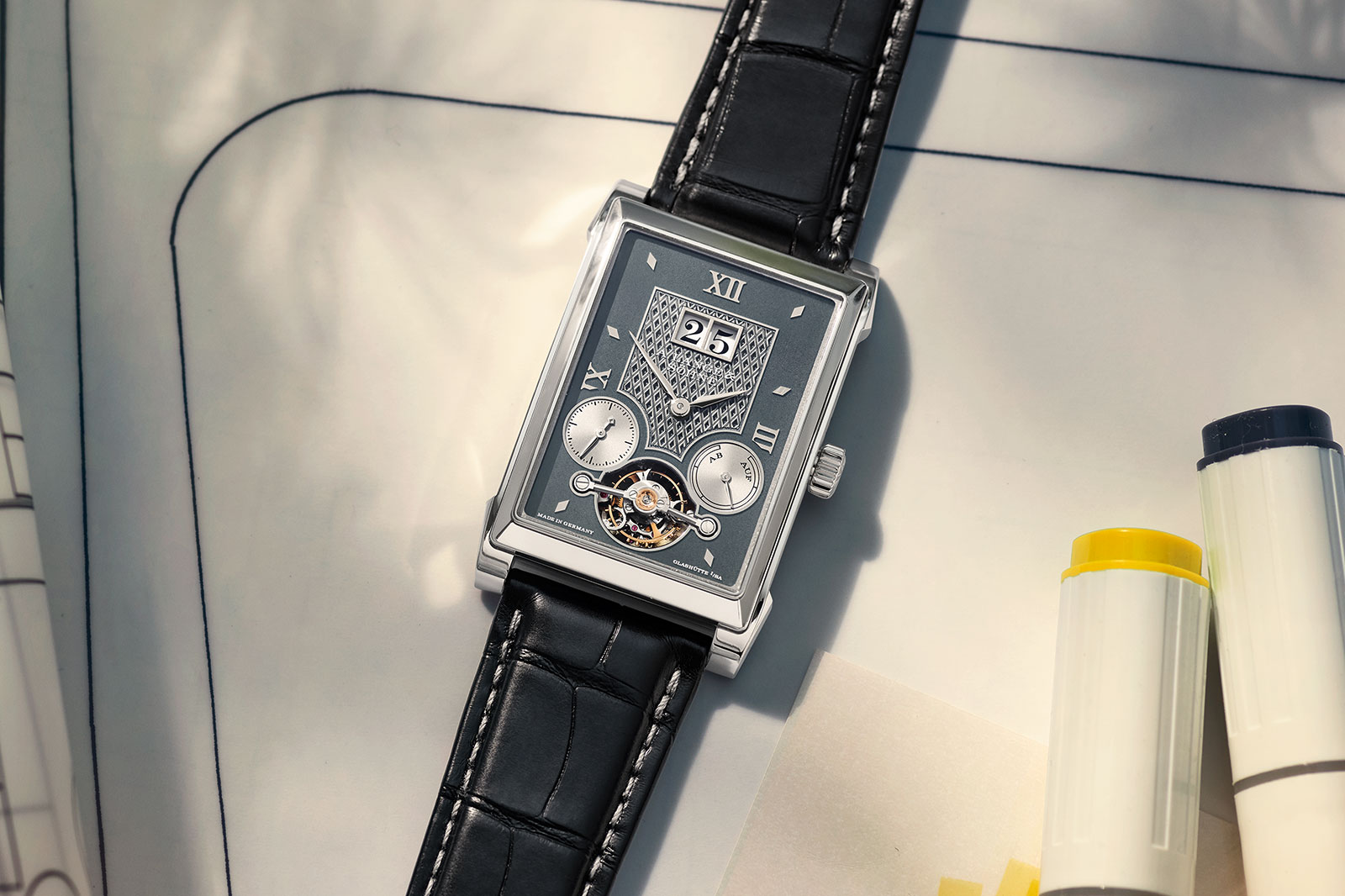 Easily the most surprising of the three recent releases by A. Lange & Söhne is something unconventional but familiar – the brand’s flagship rectangular watch that was first released in 2008, but now dressed up in artisanal finery.

The Cabaret Tourbillon Handwerkskunst is seventh in the eponymous line characterised by artisanal decoration – handwerkskunst translates as “craftsmanship” – and features a hand-engraved lozenge pattern on the front and back, along with a fired enamel dial. 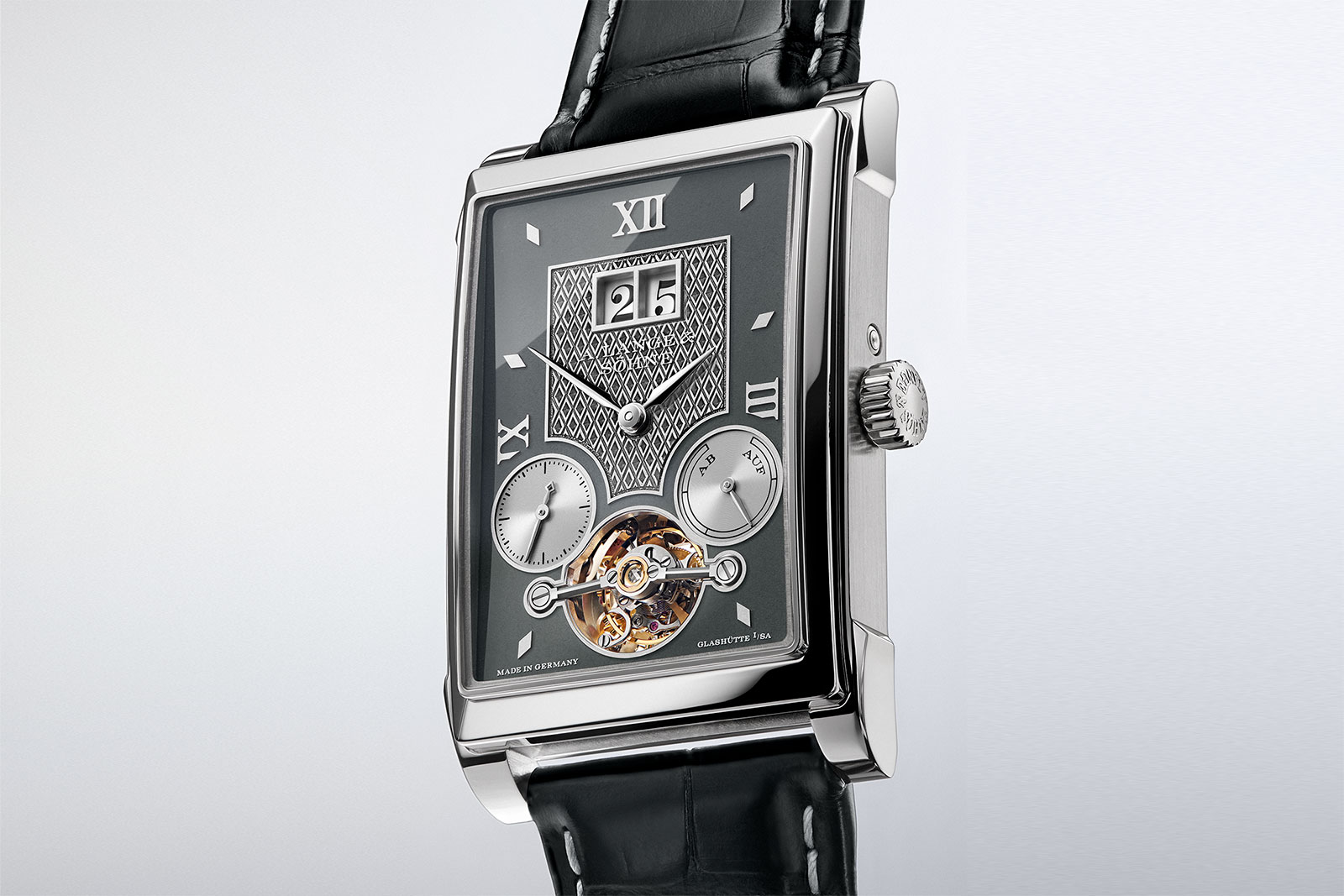 The Cabaret Tourbillon was quite a statement at its launch, being the first wristwatch with a hacking tourbillon – pull the crown and the entire tourbillon assembly stopped – which allowed for more precise setting of the time.

But despite its merits, the original Cabaret Tourbillon was never a hot seller, so its revival is likely a one-off. The return of the model is certainly unexpected, since the Cabaret left the catalogue several years ago. The Cabaret quietly faded into obscurity, and the current Lange lineup is focused on round watches. 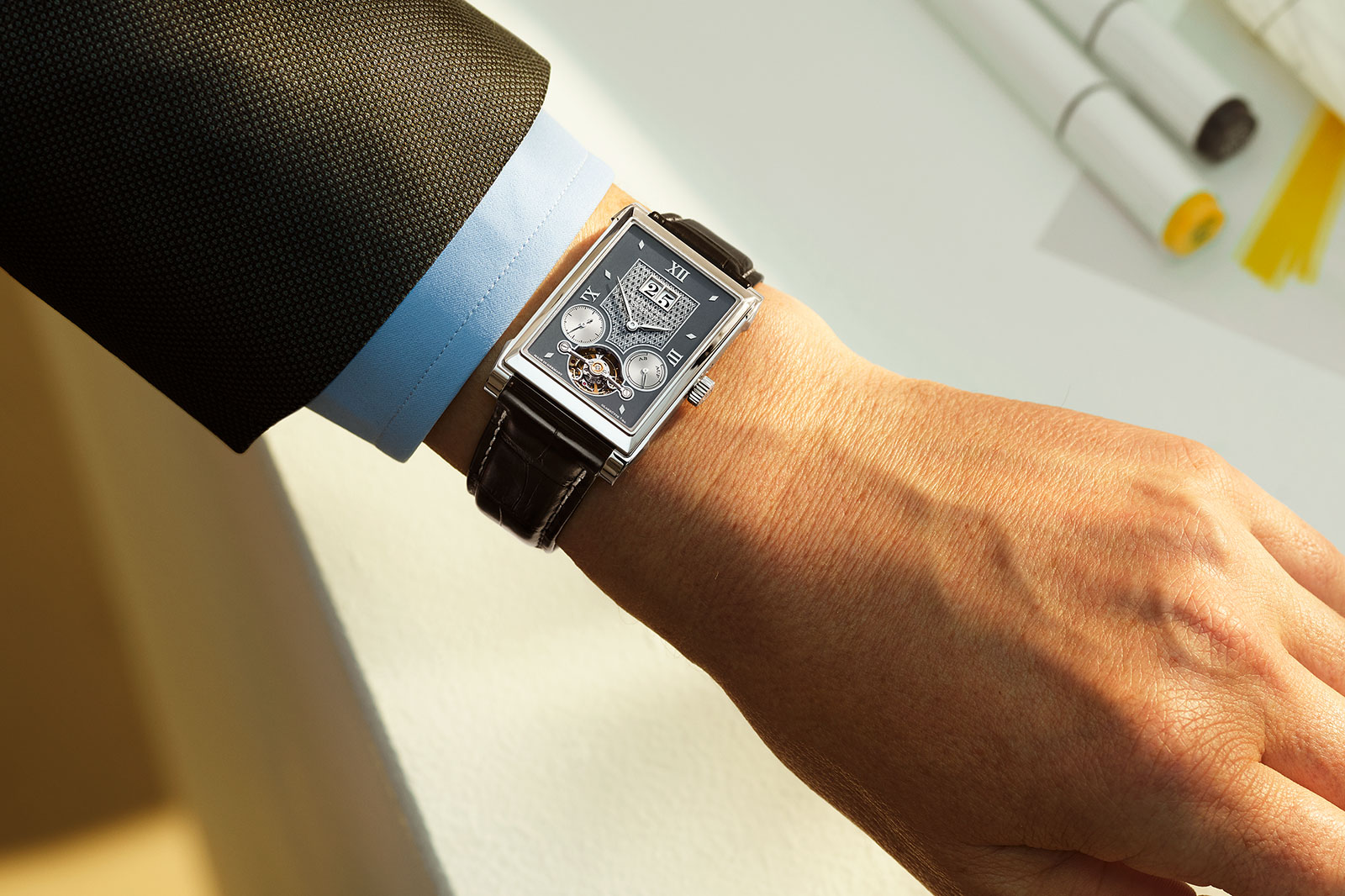 The watch is clearly meant to be appreciated close-up, with the knowledge that the geometric pattern looks like guilloche but is actually engraving done by a skilled hand.

Combined with the muted grey palette of the dial, the look is old fashioned, even dated, which may make it difficult to square with modern-day tastes. That said, the Cabaret Tourbillon is a big, weighty watch, so it will have quite some physical presence despite the low-key colours. 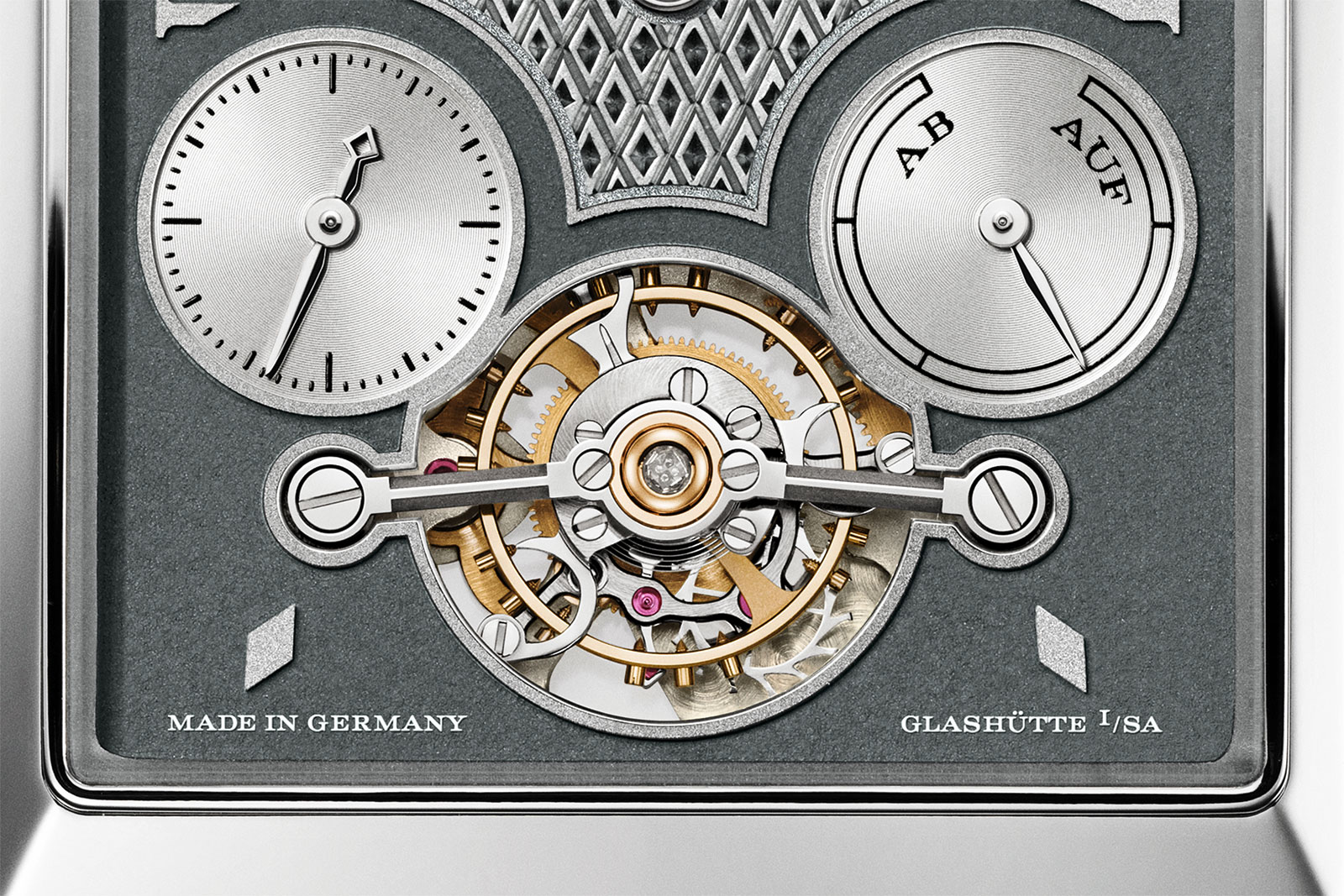 And there is the price. It’s essentially a tourbillon watch with a big date and power reserve, which makes the retail price of €315,200, or about US$370,000, a little steep. That said, being a limited edition of only 30 pieces, this will definitely be entirely accounted for before the watches are delivered in a few month’s time. 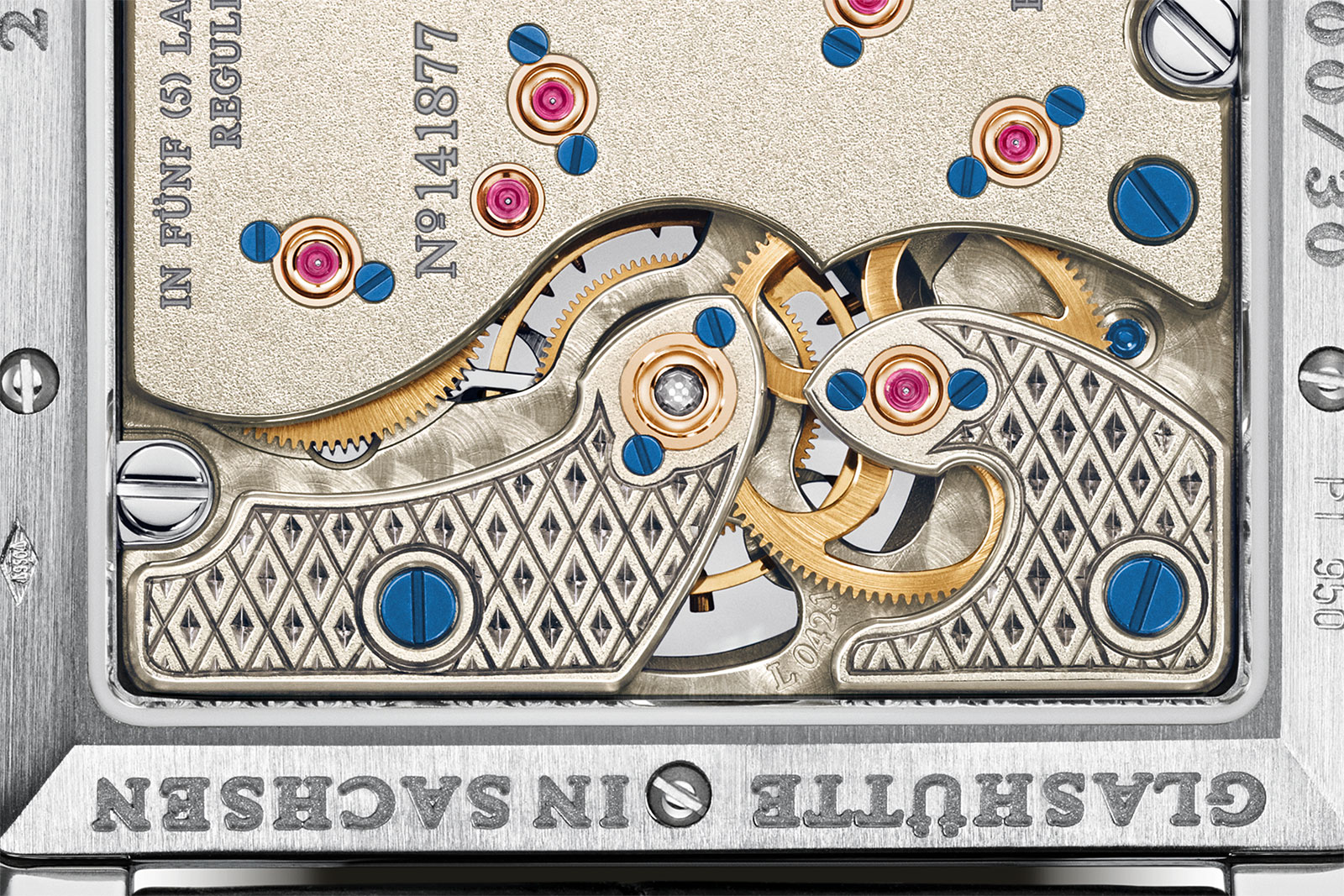 The lozenge motif is engraved on the movement cocks

Undoubtedly the highlight is the dial, which needs to be examined in detail to be appreciated, much like the other Handwerkskunst editions, but on an even subtler level. Though they are less flamboyant, the decorative methods mean the dial requires substantial amounts of time to complete, which precisely its value, notwithstanding the fact that the dial  components are all solid 18k gold.

The centre of the dial has a repeating lozenge pattern in relief – a tiny diamond within a diamond – all engraved by hand with no mechanical aids. Inspired by the lozenge-shaped hour markers, the repeating motif requires an undeniable amount of skill to ensure that each diamond is parallel to the next and evenly spaced. Even the slightest deviation, a crooked line or varying width, will be instantly evident and disrupt the overall uniformity. 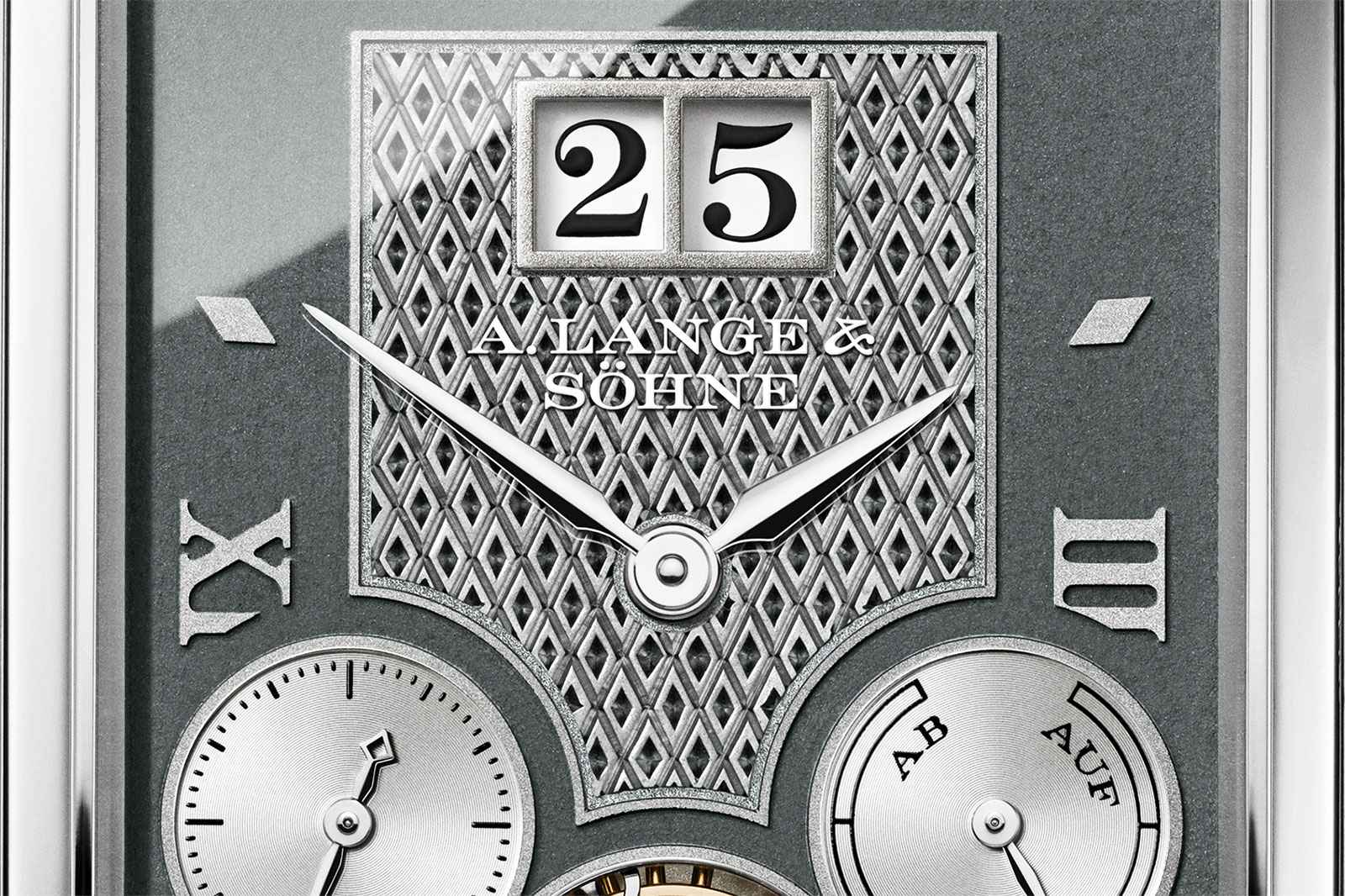 To further emphasise the handwork on the dial, the thin, recessed border that encircles the lozenge pattern is decorated with tremblage – a uniformly grained finish achieved by hammering the surface to create fine, consistent dimples.

And the central engraved section is surrounded by the chapter ring bearing Roman numerals and diamond markers that are engraved in relief.

Finally, the dial is also enamel: while difficult to discern in images, the hand-engraved section and outer chapter ring are covered in translucent enamel – a technique known as champleve – which provides a glossy sheen to the dial, while enhancing its depth. 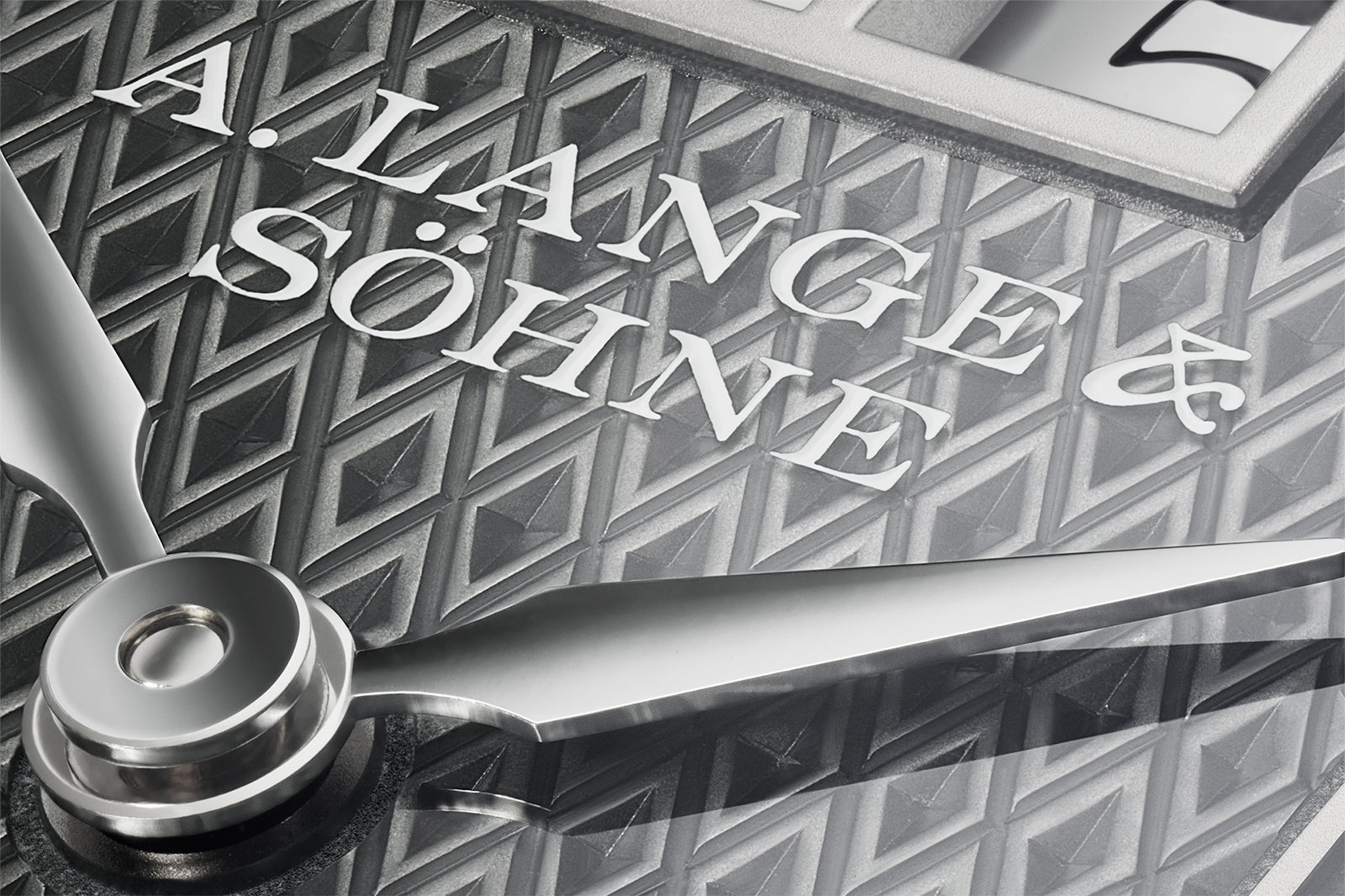 A cutout at six o’clock showcases the tourbillon, which was the first to incorporate a hacking feature. Pulling out the crown to set the time sets in motion a V-shaped, pivoted spring that touches the cage, stopping its rotation. The shape of the spring conforms to the shape of the cage regardless of its position, allowing it to halt the cage at any point in time. 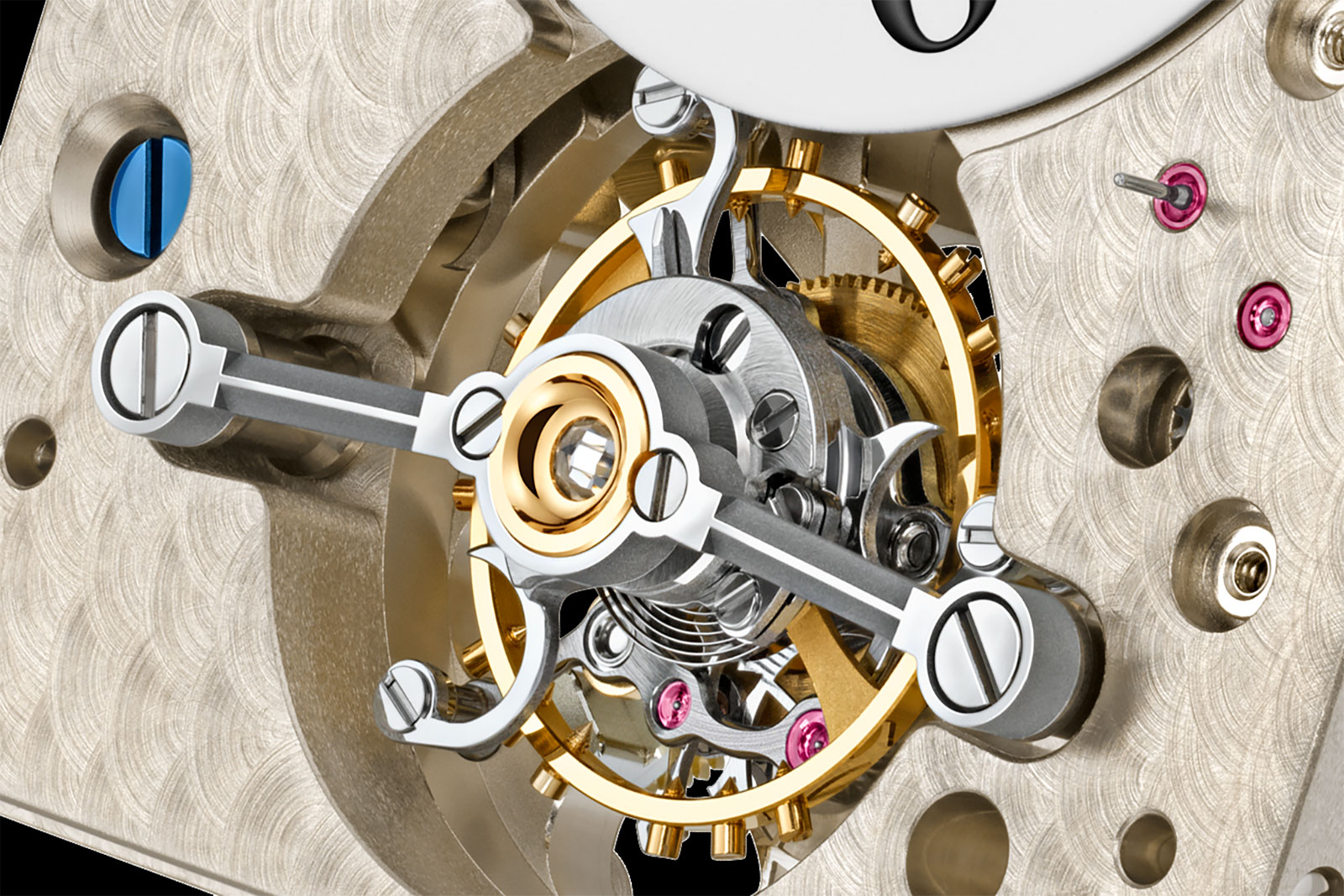 The tourbillon is exposed on the dial, and the rest of the movement is visible through the display back. A form movement that fills the rectangular watch case, the L042.1 has a large, three-quarter, German-silver plate with gold chatons for the movement jewels, very much typical Lange style. But in the tradition of the Handwerkskunst line, it is finished in a special manner. 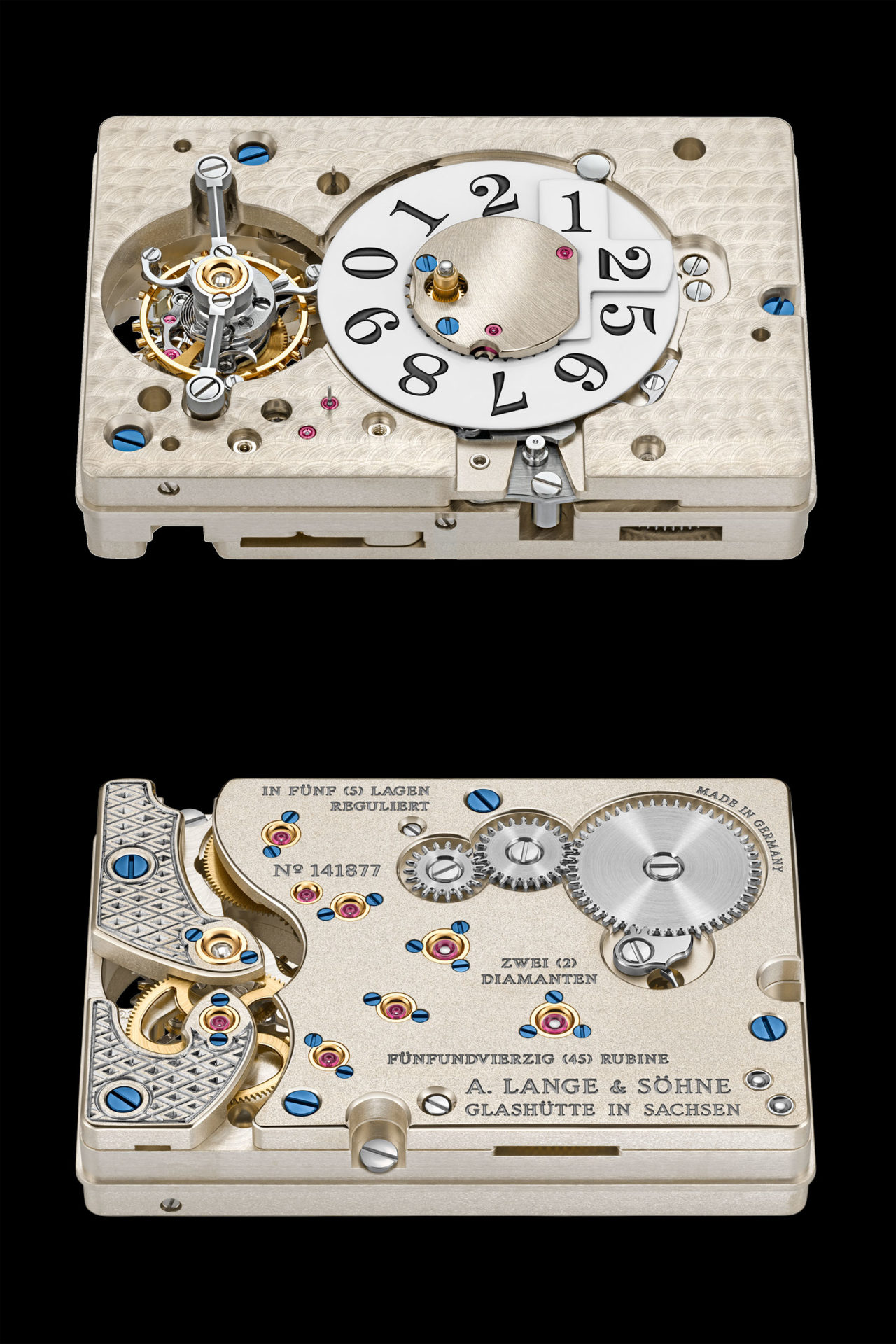 The movement is decorated in a fashion similar to the 175th Anniversary “Homage to F.A. Lange” watches, which includes the 1815 Rattrapante and 1815 Thin, with the three-quarter plate having a restrained frosted finish instead of conventional striping. 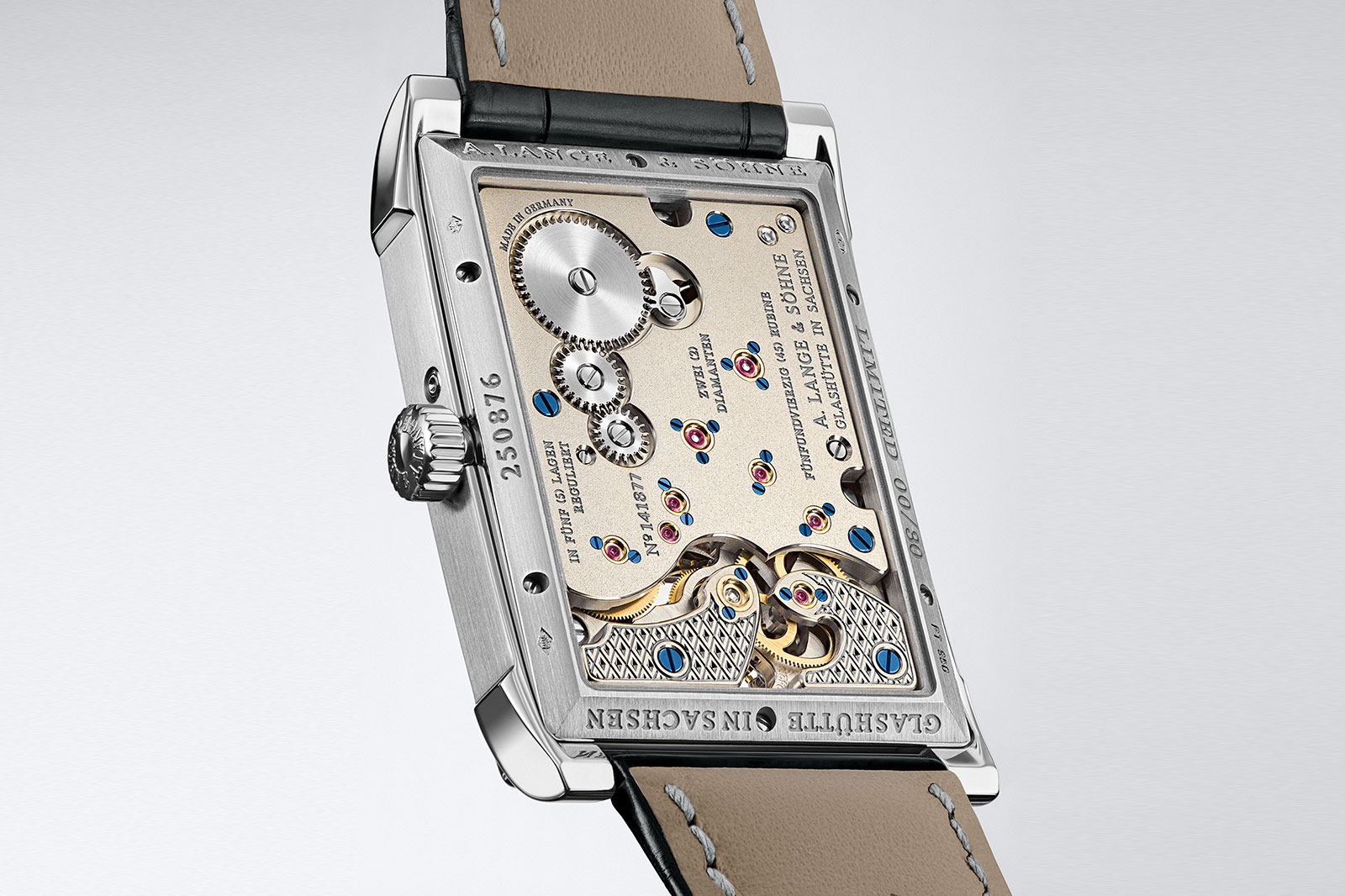 Also, the exposed ratchet and crown wheels have circular graining instead of the usual radial sunburst finish. Circular graining is arguably more visually appealing as it also emphasises the polishing of the individual wheel teeth. 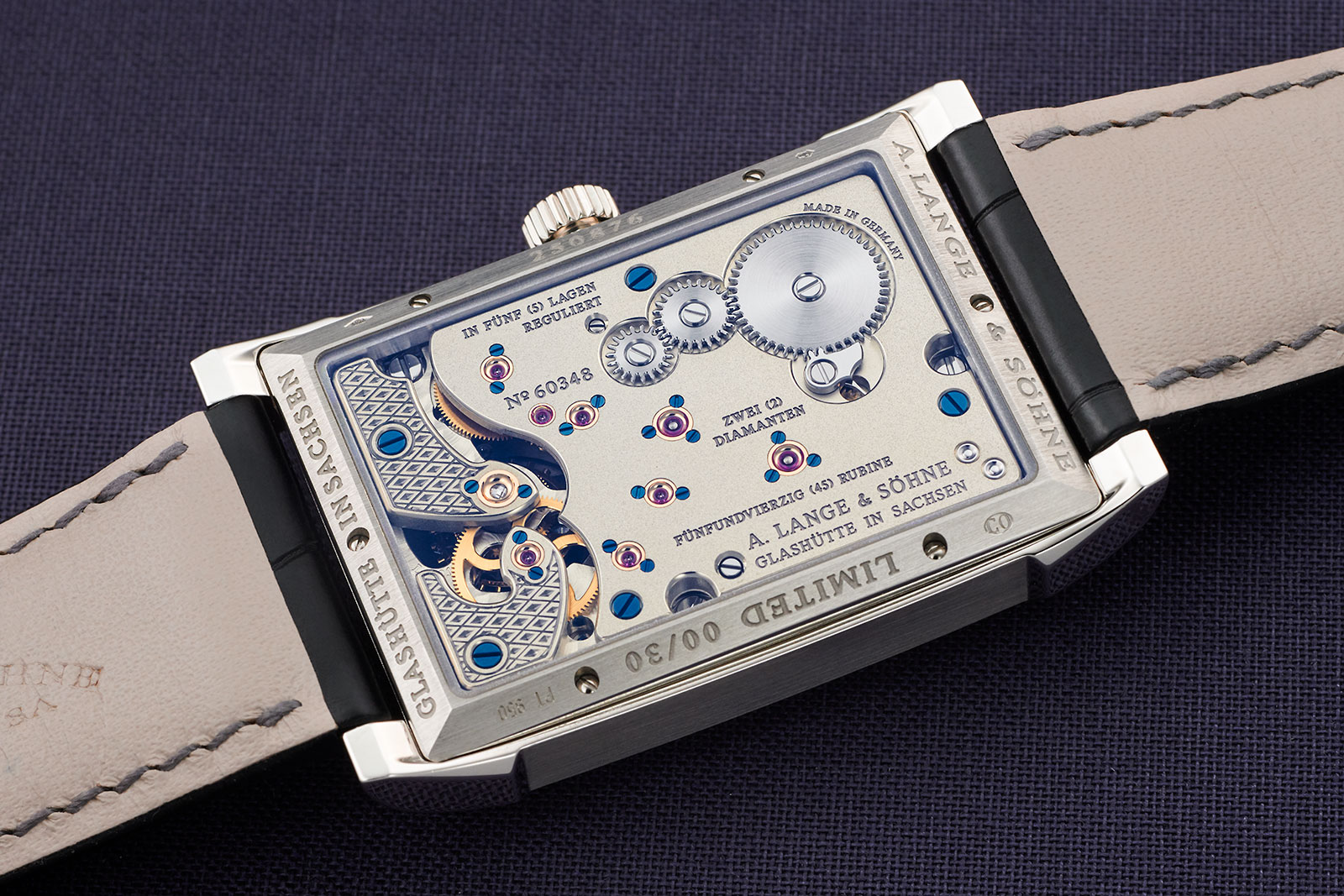 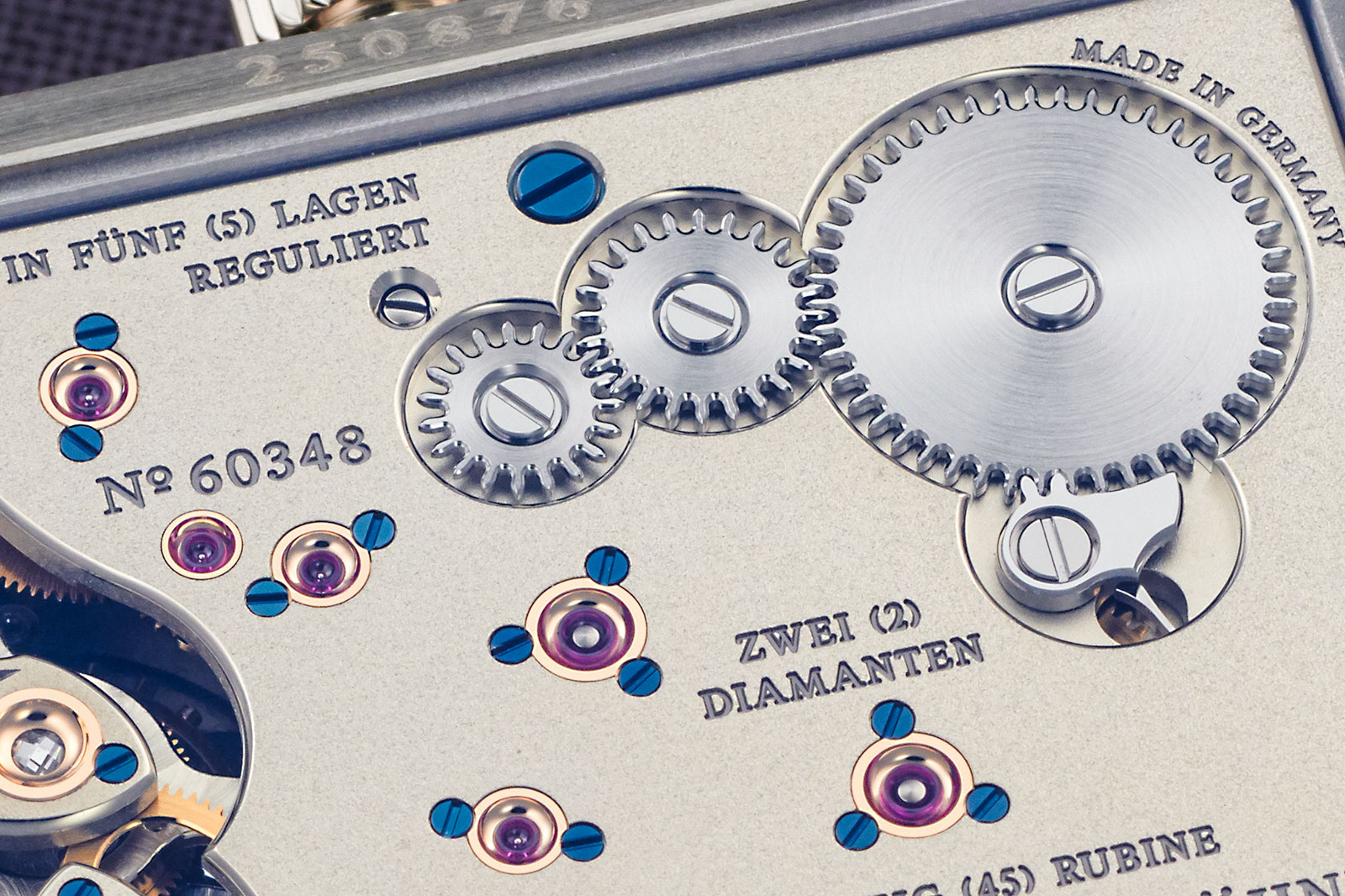 The exposed wheels with their polished teeth

Being relatively large and rectangular, most of the movement’s volume can be effectively used, including large twin mainspring barrels, giving it an impressive power reserve of 120 hours. The running time is even more impressive considering the fact that a tourbillon cage requires more torque to drive compared to a regular watch escapement, due to its substantially greater weight. 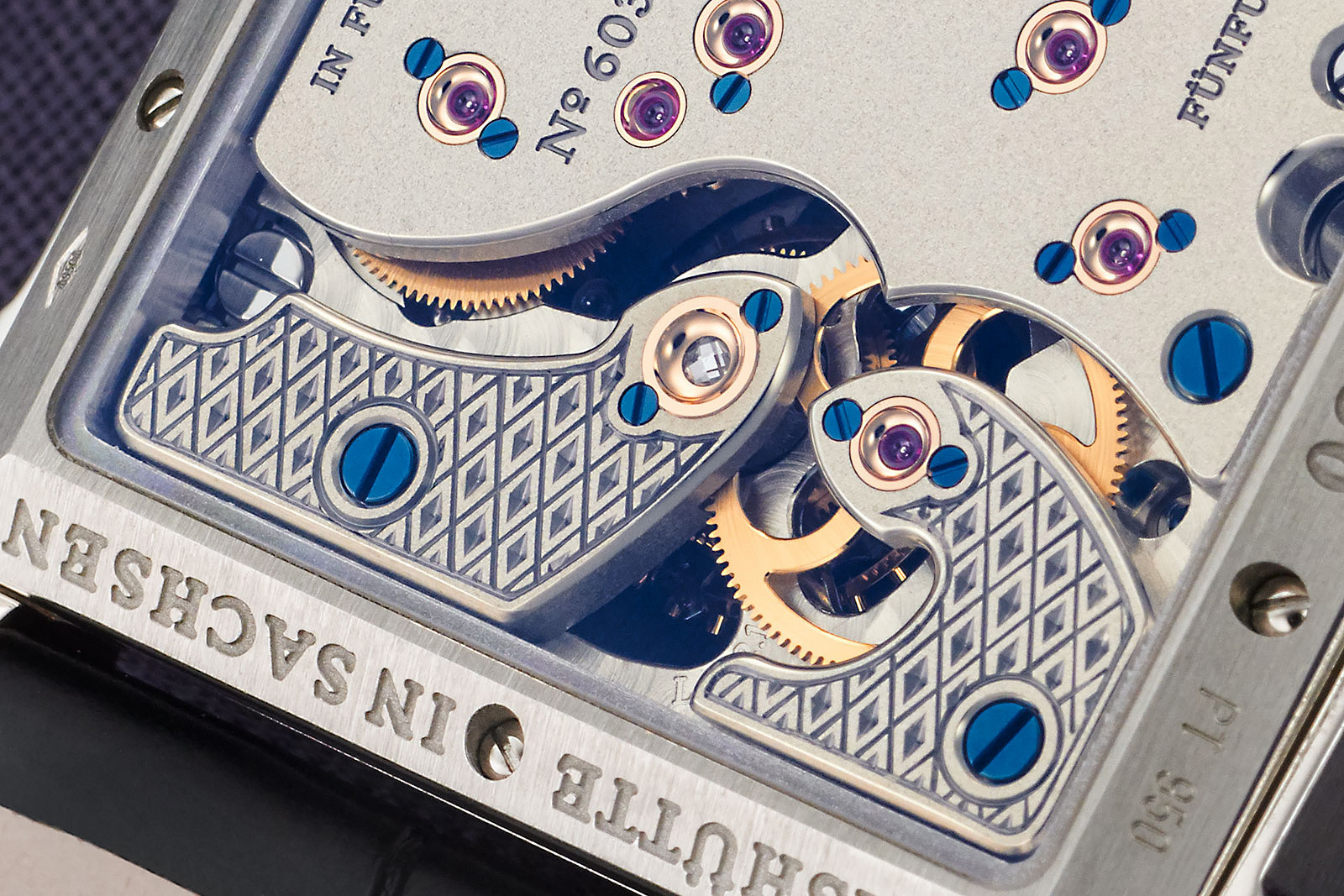