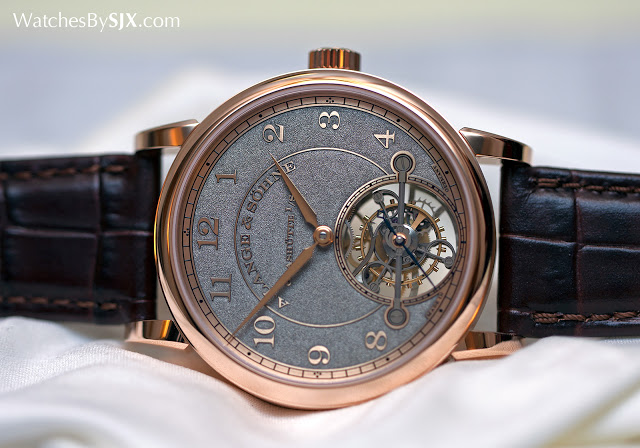 Translating as “craftsmanship”, handwerkskunst is the moniker applied to limited editions that are decorated by hand. Most have intricate hand-engraving, like the Zeitwerk and Lange 1 Tourbillon Perpetual Calendar, though last year’s Lange 1 Tourbillon was characterised by its black enamel dial. The fifth in the series, the 1815 Tourbillon Handwerkskunst is distinguished by two qualities: a hand-engraved, solid gold dial, and a movement featuring a more intricately shaped three-quarter plate. The dial starts as a disc of 18k pink gold. A skilled engraver then carefully uses a burin to carefully engrave the dial with a technique known as tremblage, giving the surface a fine, granular finish. After the engraving is complete, the dial is plated with black rhodium, giving it a dark grey colour. While the tremblage surface is recessed, the rest of the dial is raised, with the hour numerals, logo and minute track in relief. The black rhodium is then polished off the raised surfaces of the dial, returning them to the original pink gold colour and creating a warm contrast between the two tones. The result is a dial that appears simple at a distance, but impressively intricate up close. Though done by hand, the tremblage engraving is satisfying consistent. The only drawback of this hand-engraving is the enlarged logo that is noticeably larger than that on the ordinary version of the 1815 Tourbillon. Because the letters of the logo have to be large enough for the engraving to be done around and in between, the size is inevitable. A good movement made better But that’s not what makes the movement special. To start with, the movement in the 1815 Tourbillon Handwerkskunst is decorated differently, with the German silver three-quarter plate bearing a frosted finish. And the bridge for the tourbillon is partially open-worked, as well as hand-engraved. All the lettering on the movement and case back is also hand-engraved, with the telltale serif font of the technique. A bit less than three-quarters but a lot more work A sizeable amount of the three-quarter plate has been removed to show the tourbillon in its entirety. This creates a plate with several gorgeously formed inwards and outward angles (sometimes the ordinary 1815 Tourbillon lacks), providing better view of the tourbillon, but more significantly, finishing that is more complex and time-consuming. Beyond the new, circuitous outline, the three-quarter plate has also been open-worked to reveal the barrel, again providing an opportunity for more hand-finishing with the polished, bevelled edges. The dimensions of the 1815 Tourbillon Handwerkskunst are identical to the regular model, with a case diameter of 39.5 mm and height of 11.1 mm. Limited to one 30 pieces, the 1815 Tourbillon Handwerkskunst is available only at Lange boutiques. It is priced at €156,000 before taxes. In Singapore it will cost S$273,000 including tax.

A Detailed Look at the A. Lange & Söhne Datograph Perpetual Tourbillon

Big, bold and intricate, the Datograph Perpetual Tourbillon combines one of the most beautiful chronograph movements with a perpetual calendar and tourbillon to create one of the most complicated watches made by A. Lange & Söhne.