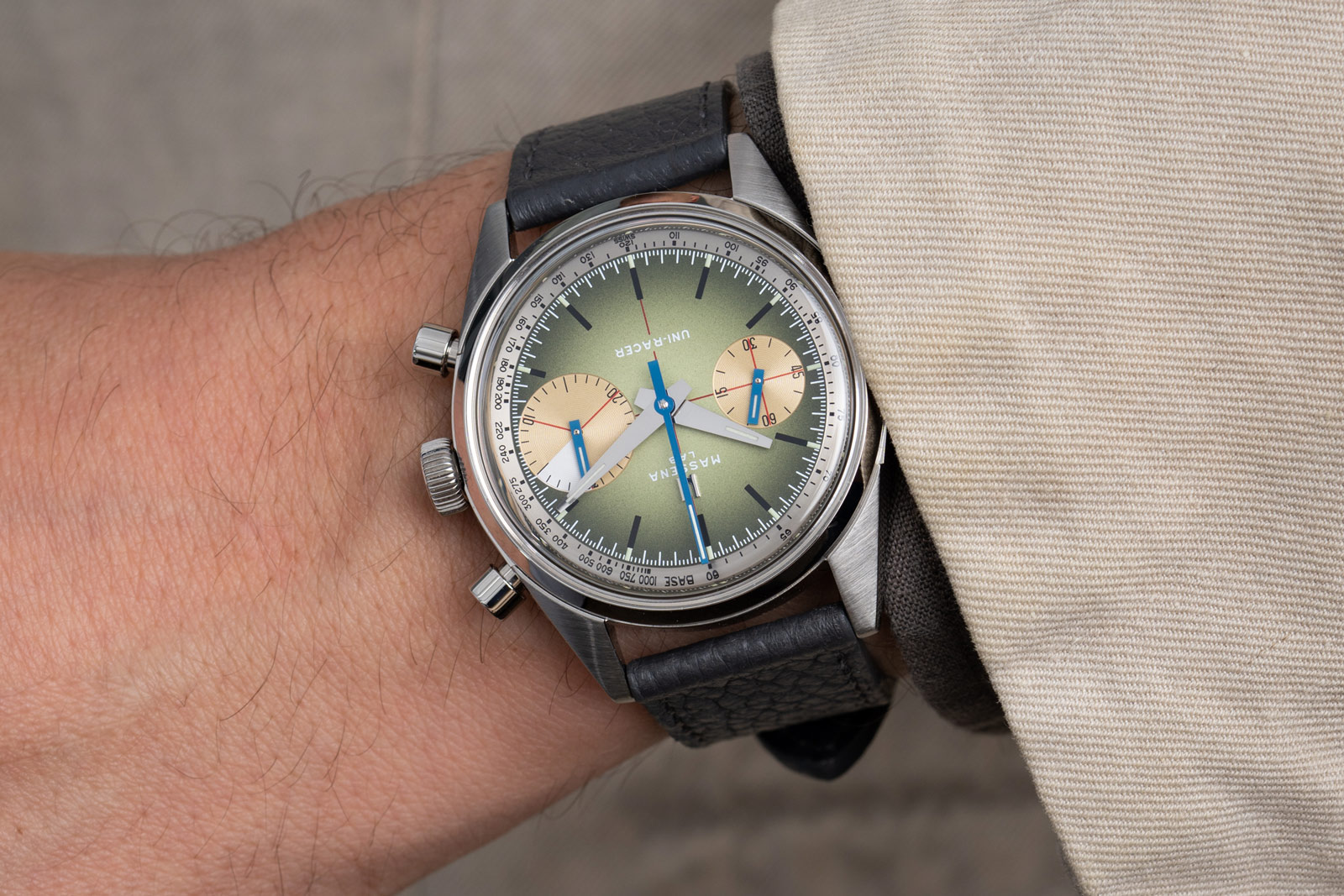 Massena Lab is a design studio that got its start collaborating with independent watchmakers on limited edition timepieces. But the firm more recently unveiled watches under its own label, starting with last year’s Uni-Racer, a chronograph modelled on the mid-20th century Universal Genève “Big Eye” chronograph.

Founded by William Rohr, best known for being the former manager of the Timezone.com watch forum, Massena Lab follows up with the Uni-Racer Holiday Collection, a trio of chronographs time clad in funky colours with a retro bent that bring to mind watches of the 1970s. 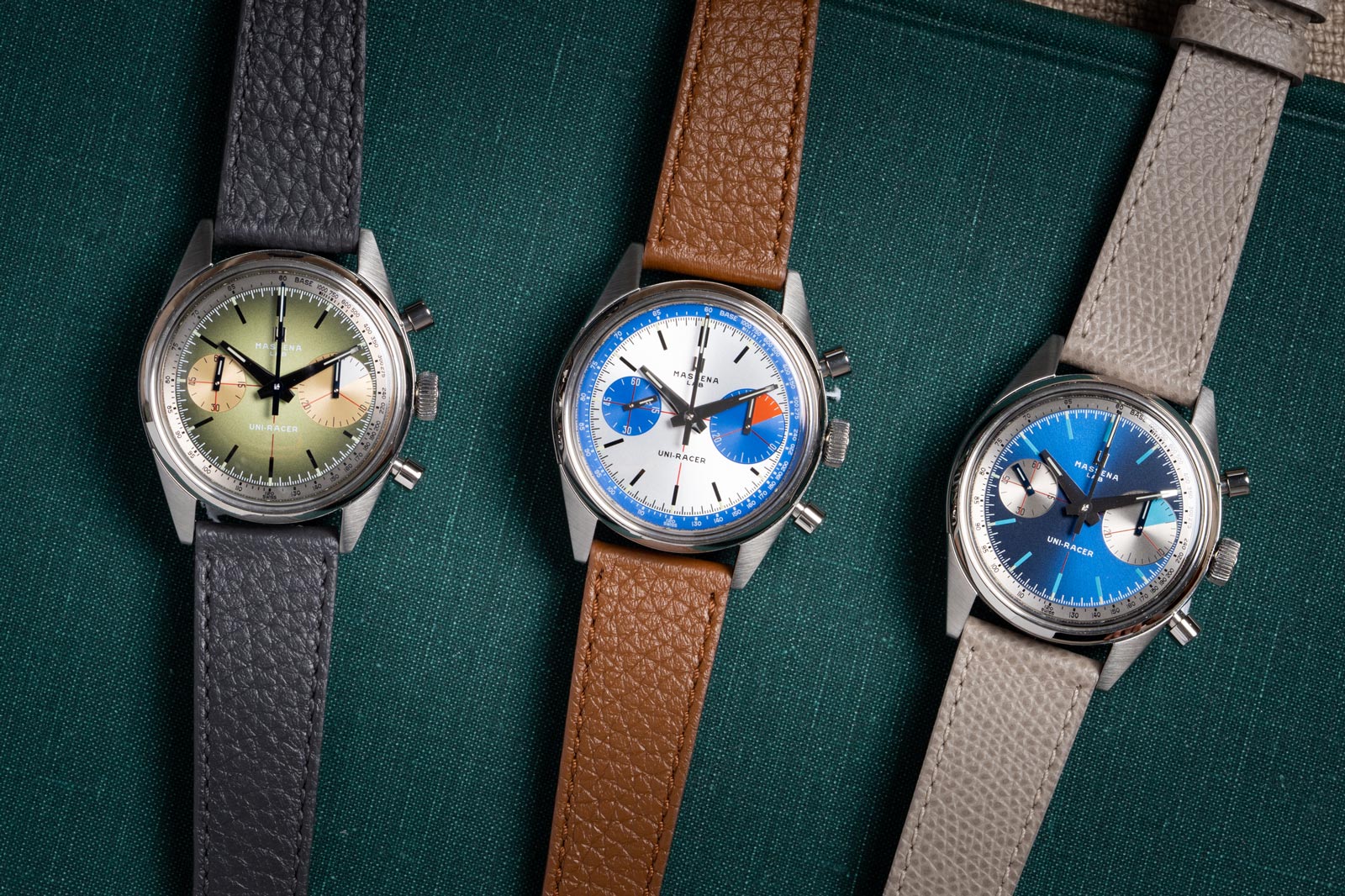 Vintage remakes have been trendy for several years now, and the sheer number of them mean they are often hit-or-miss. It’s rare for a remake to get the details right ­­– especially since the case and movement are modern ­– something that takes a keen eye to decide what to copy and what to tweak.

Mr Rohr’s creations often get the details right – the two-tone sector dial jumping seconds and gilt dial chronograph are cases in point – reflecting his decades of watch collecting. And importantly they are fairly priced.

But the Uni-Racer Chronograph stands out from Massena Lab’s portfolio to date. Not only was it the first watch to bear the Massena Lab brand, but it was a near-exact copy of the vintage original – which split opinions and elicited lots of vocal critiques on social media. 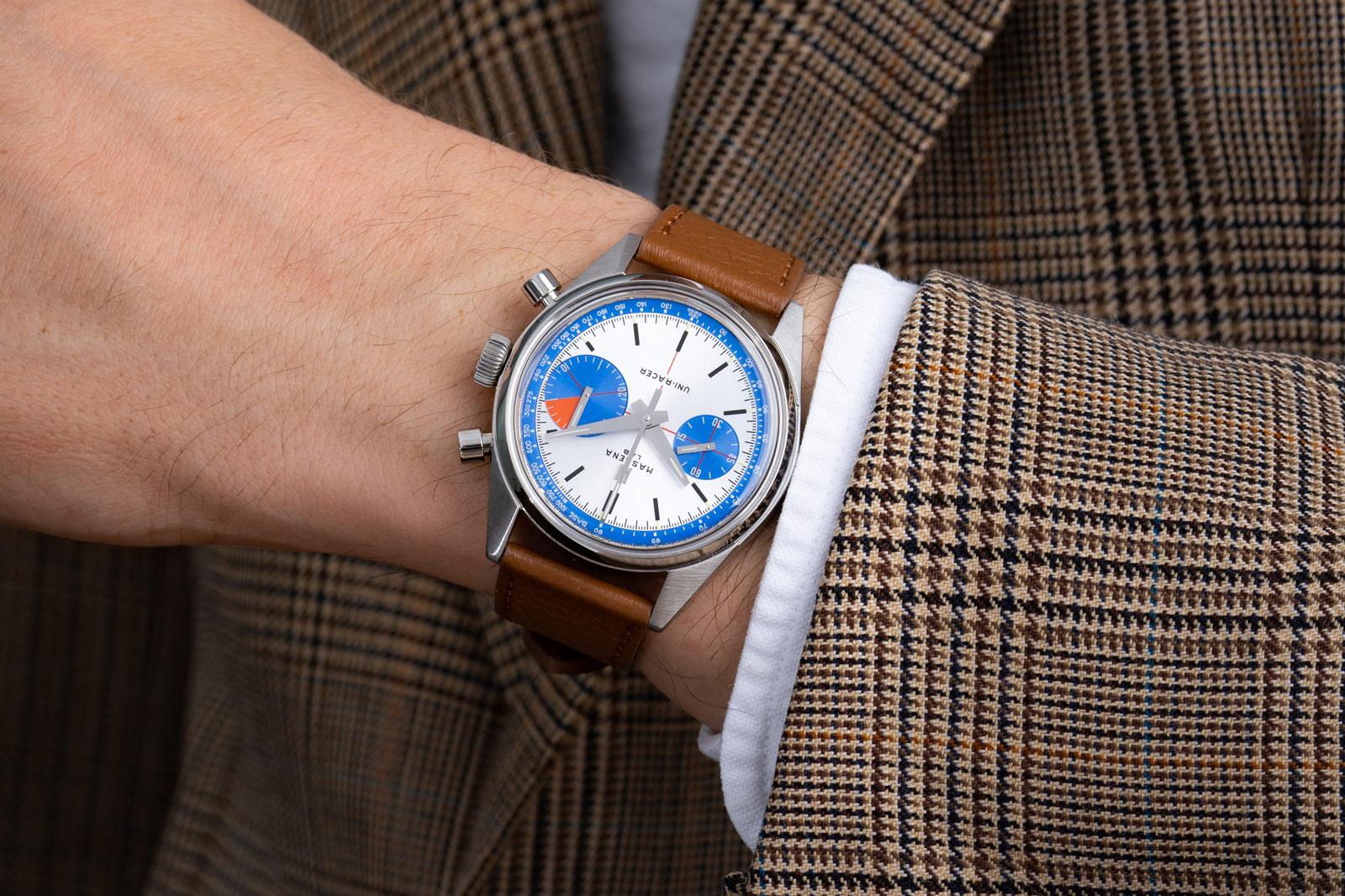 Still, for anyone who appreciates old-school design, but with a colourful twist, the new trio in “Holiday” colours are good options. Crucially, the price of the new trio remains identical to the first-generation Uni-Racer. That makes the new “Holiday” versions an attractive value proposition at US$3,495. 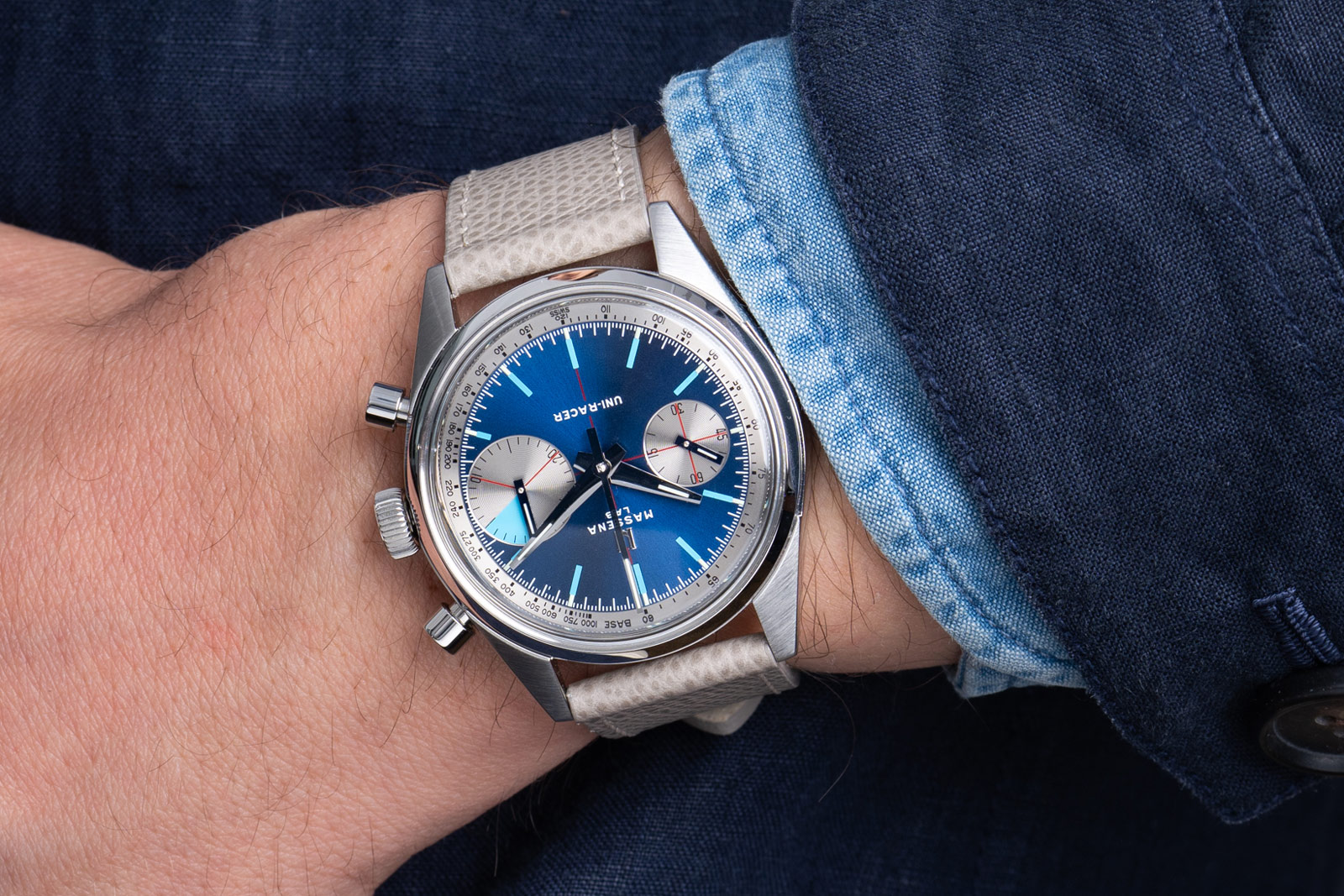 The “Holiday” dials are thoughtfully designed, with subtle details and contrasting colours that work well together. For example, sky-blue and red might sound incongruous on paper, but they make a good pair on “Cruise”, which is predominantly blue but with red crosshairs on the sub-dials.

In fact, a red crosshair is the unifying element across the three – all of the dials feature crosshairs on the dial as well as registers. Among the three colourways, “Rally” is no doubt the most vintage-y, having a white dial with bright orange and blue accents, bringing to mind auto-racing chronographs from the 1970s such as the Tudor “Monte Carlo”.

The most unusual is the “Safari”, thanks to its green fumé dial that’s rarely found on modern chronograph. In fact, the “Safari” also stands out for its excellent pairing of colours – the centre of the fumé dial is yellowish green, echoing the gold counters. 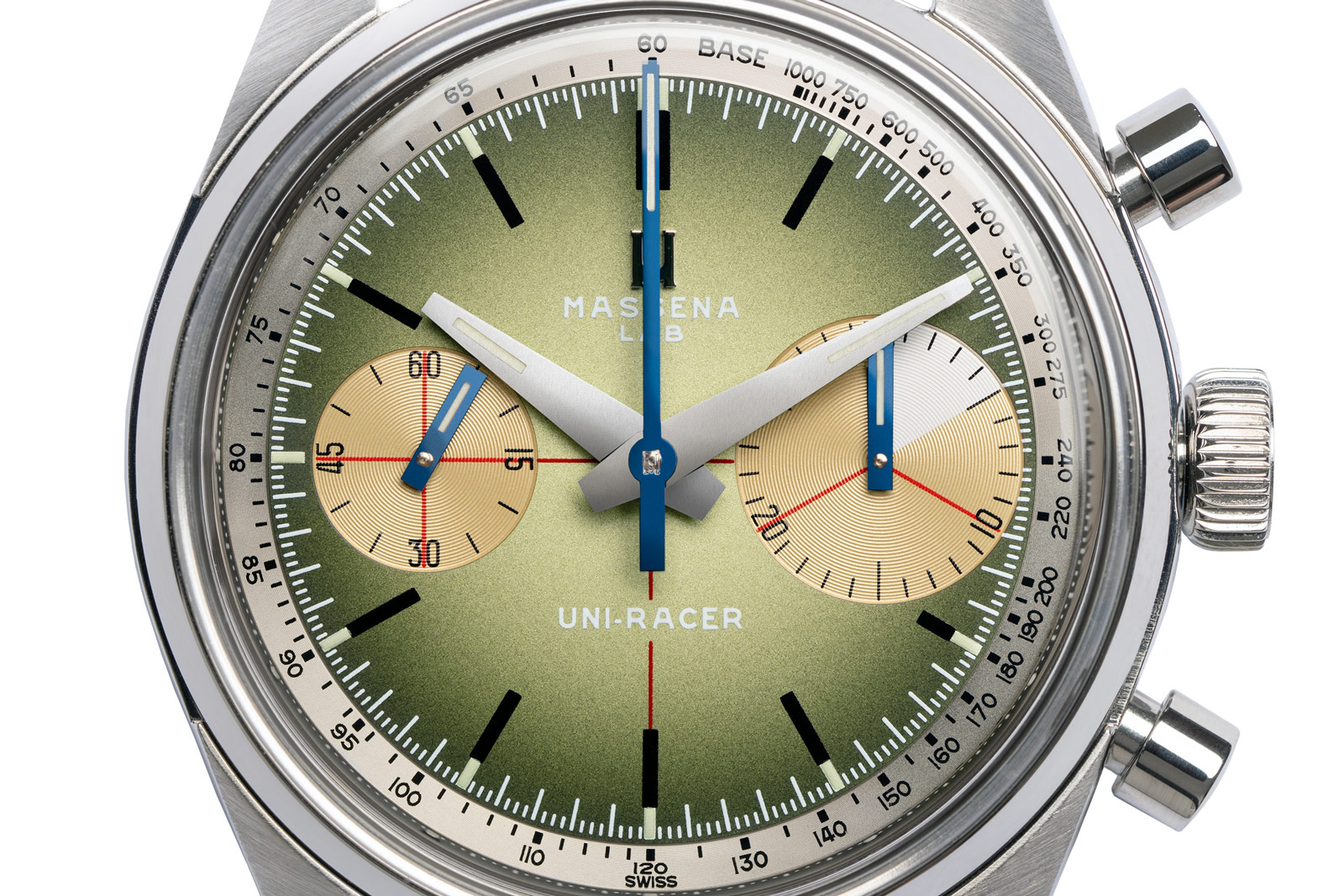 Save for the new colours, the latest Uni-Racer is identical to its predecessor, which means the watch is a largish, modern size but retains several vintage-inspired details.

The case, for instance, has facetted surfaces and alternating brushed and polished finishes, just like the original Universal Genève “Big Eye”.

And the movement is as old school as it gets for an affordable, modern-day watch, being a hand-wind version of the Sellita SW500, which is a clone of the ETA 7750. 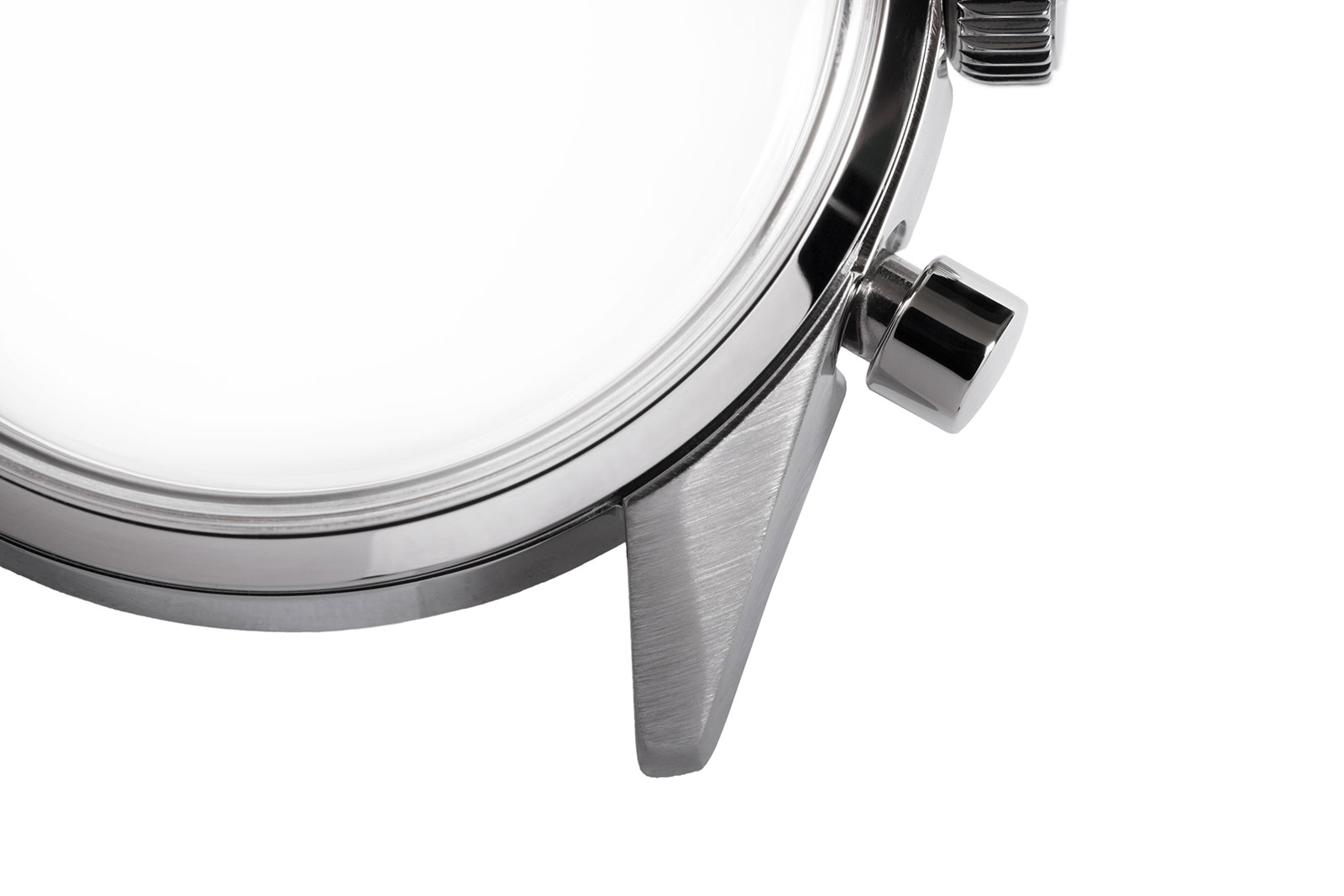 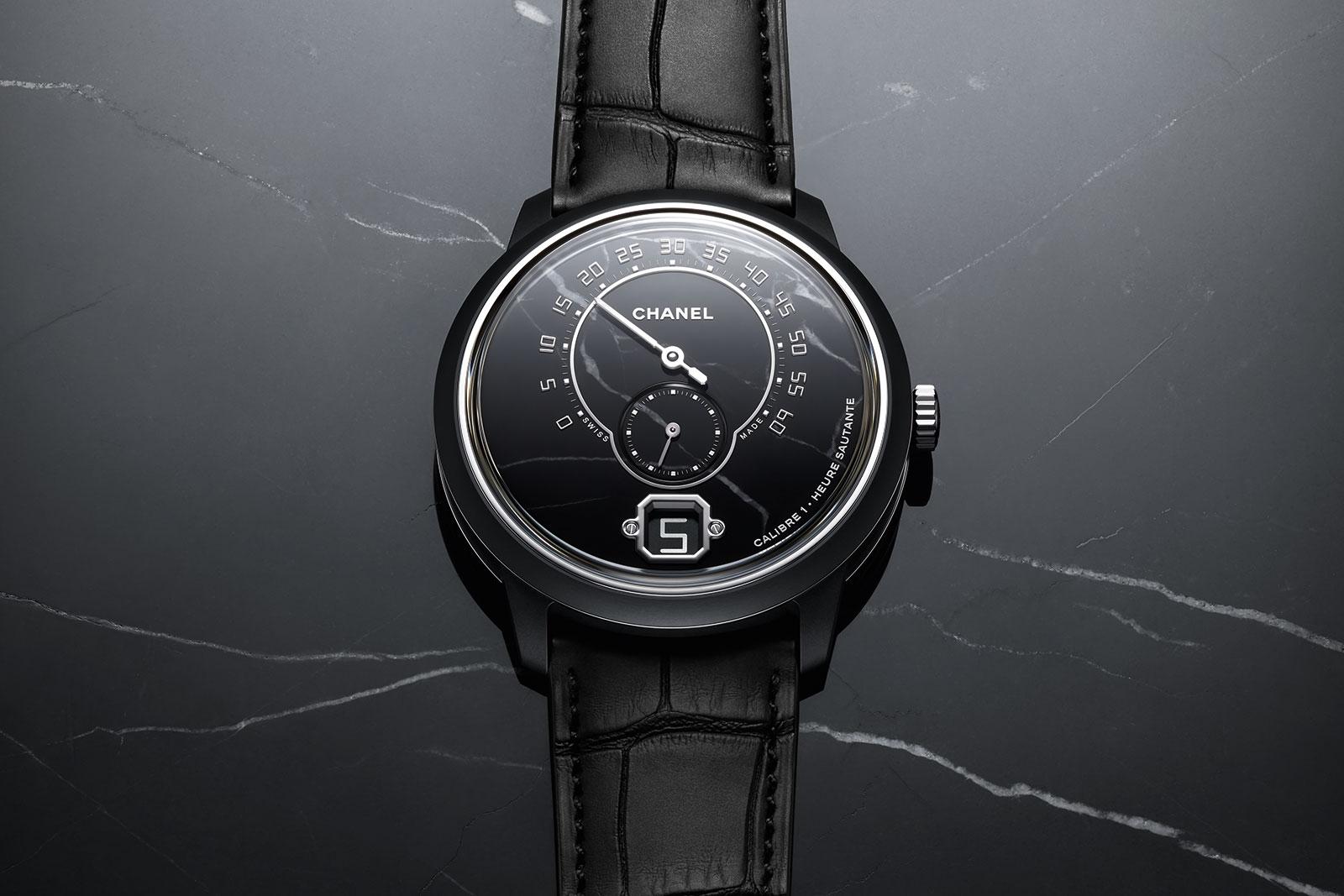 While Chanel started the year with the J12 in rainbow colours inspired by electronic dance music, its latest is sleek and stark in black and white. The Monsieur Marble Edition is a variation of the Monsieur Edition Noire from 2019, retaining the same steel and ceramic case – and the in-house Caliber 1 movement – but matched with a dial in glossy black marble with white veining.

I liked the original Monsieur de Chanel when it was launched in 2016. Even though Chanel is a primarily fashion house, the Monsieur was proof it made excellent watches for men. Its design was thoughtful, and the movement attractively executed in both style and construction.

The subsequent Monsieur in black ceramic had all the same qualities, but an monochromatic look that made it more appealing. And the new version is even more appealing, because the marble dial looks good. 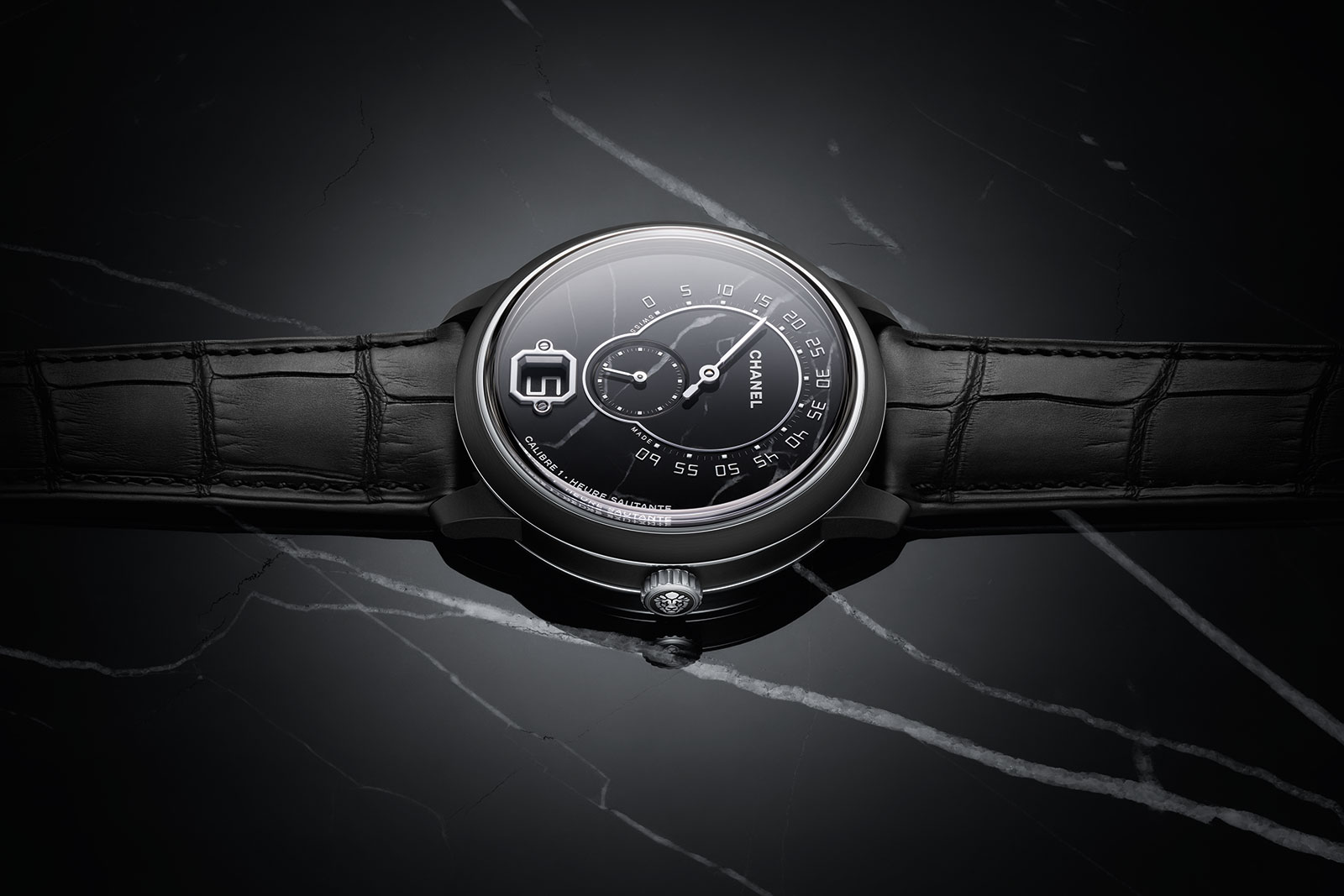 Even though the only change is the marble dial, its natural grain goes well with the design of the Monsieur, so the whole is greater than the sum of the parts.

Price wise, however, the new Monsieur is harder to digest. At just under US$37,000, it costs almost US$10,000 more than the original version in ceramic, which was a reasonable-enough proposition considering the design and movement. The Marble Edition is unquestionably beautiful – I’d want one – but the price is steep.

Each dial is made of one piece of marble carefully cut into three to form each section of the dial, allowing the grain of the marble to continue across the dial from minute track to recesssed seconds. According to Chanel, each of the 55 pieces of marble used for the dials were individually selected for their “unique character and graphic”. 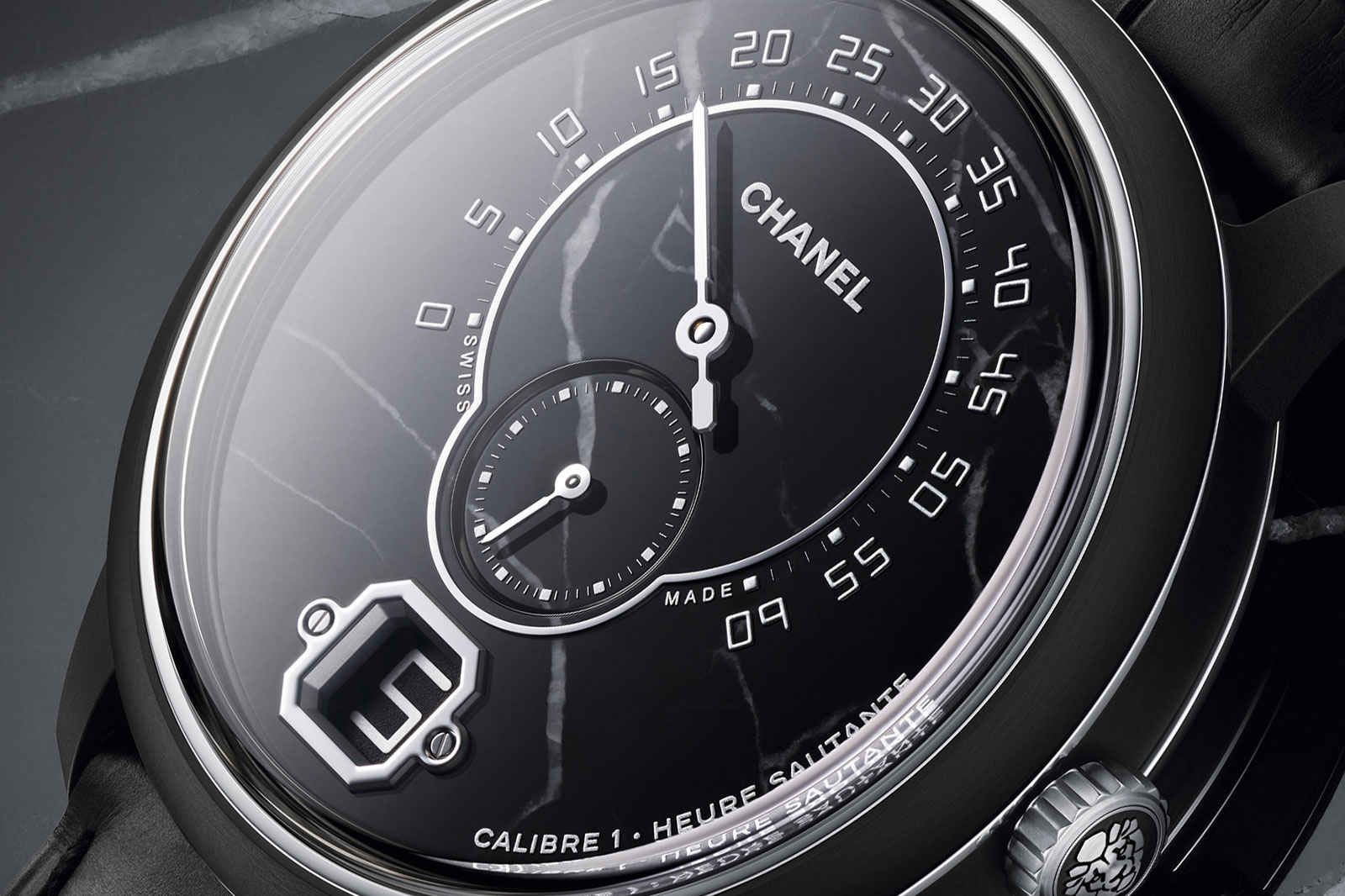 The dial layout preserves the symmetry of the original Monsieur, and also the numerals in a custom font designed specifically for the model. Also notable is the retrograde minutes, which sits on a 270-degree scale, instead of the narrow scale of under 180 degrees found on most retrograde displays. 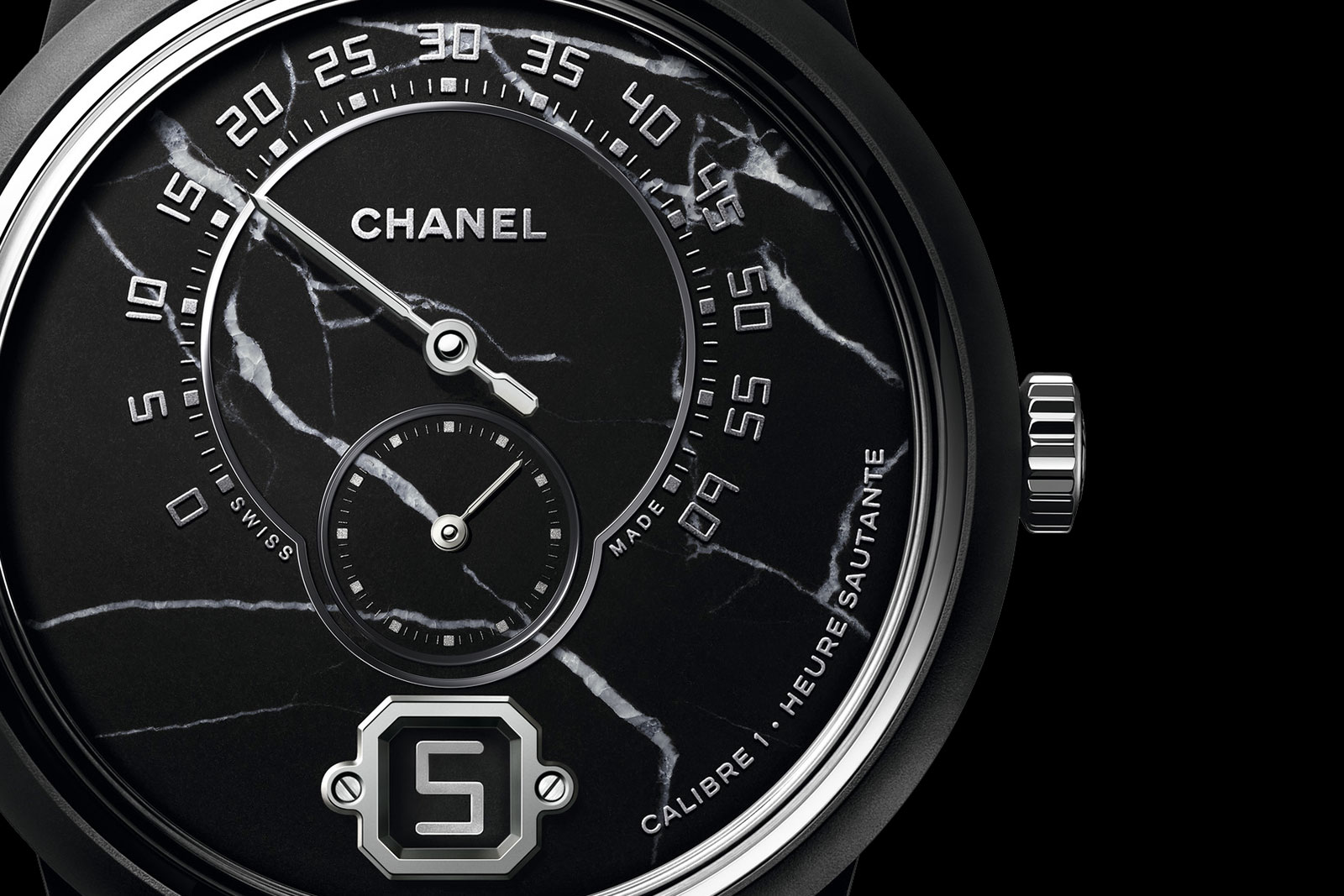 The case remains identical to the original Monsieur in black ceramic. It’s actually a steel frame with external components made of ceramic, so the bezel is steel with a ceramic inlay on top, and the steel inner case is secured to a ceramic outer case that also incorporates the lugs.

Inside the Caliber 1, an attractive movement that is Chanel’s first in-house calibre. Designed with Chanel’s typical sharp eye for detail, the movement is laid out in a series of circles in varying sizes, with both the barrel and balance bridges echoing the circular motif.

But it’s more than just a snazzy design, the Caliber 1 features twin barrels and a free-sprung balance. More importantly, the time display mechanism is integrated into the base calibre, instead of being a module, which helps explain the thinness of the watch. 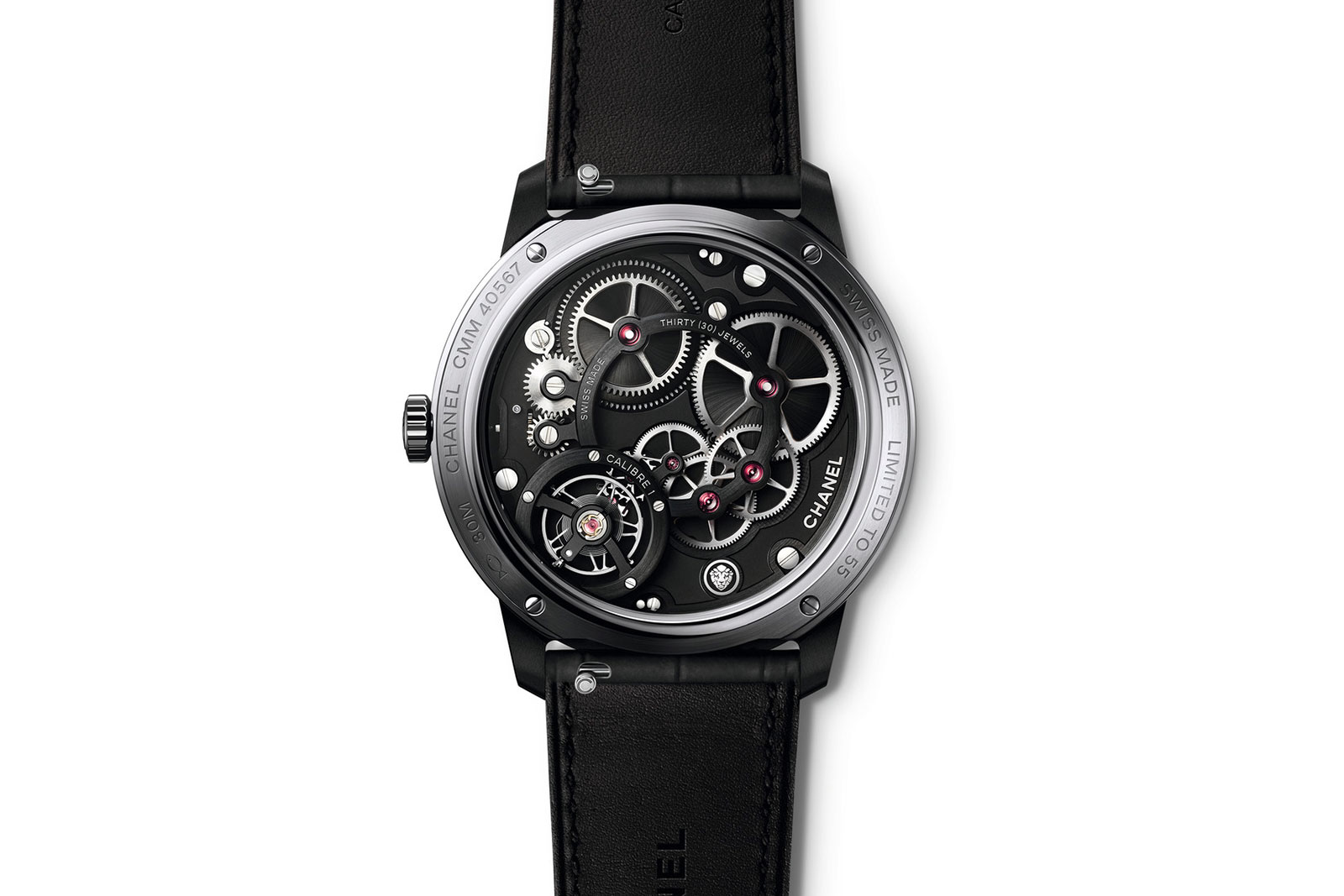 The mechanical men's watch gets a handsome black enamel dial - and a much steeper price tag.