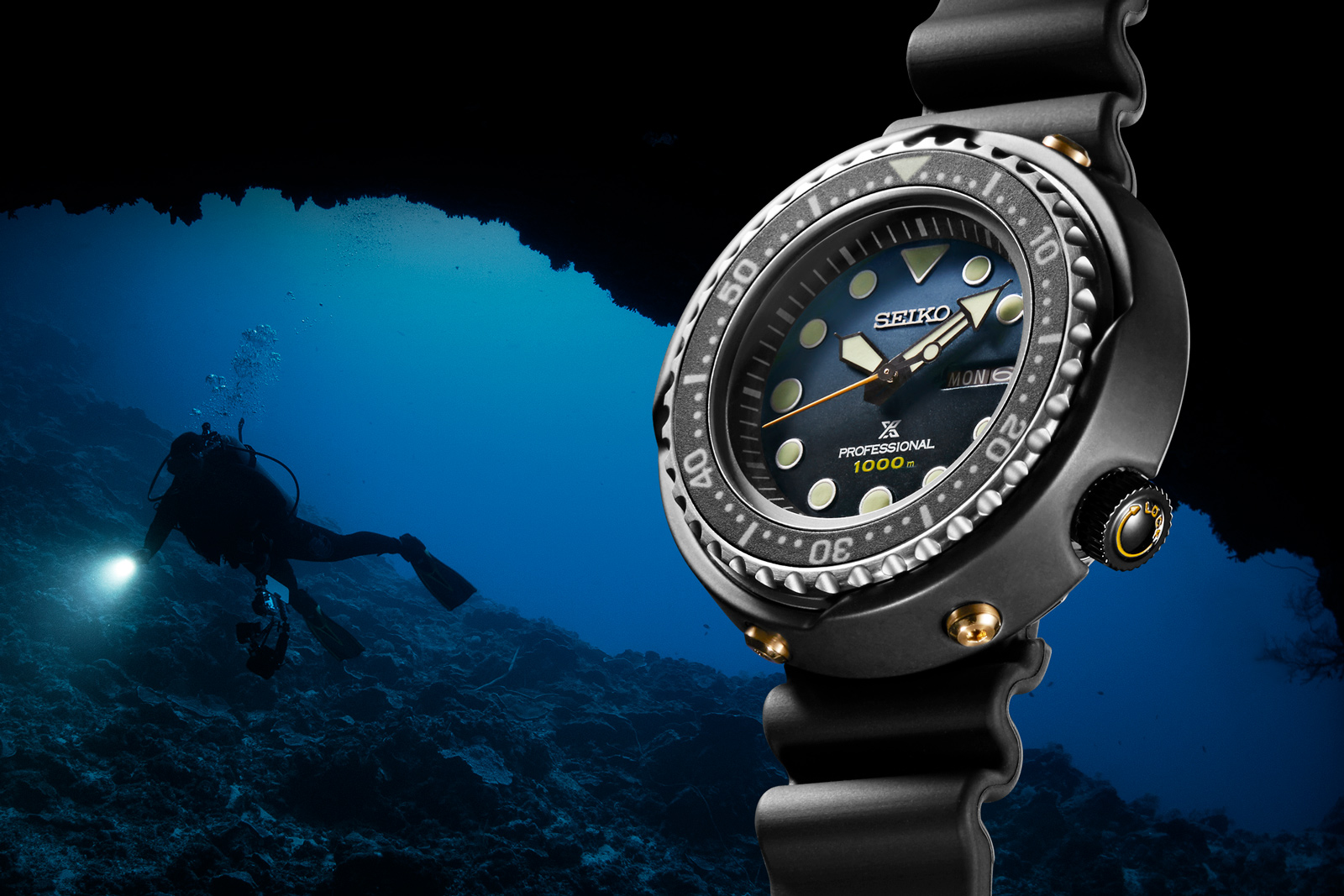 With this year being the 35th anniversary of the “Golden Tuna” 1000 m, Seiko has announced a commemorative model that’s an essentially a dressed up version of the vintage original. The Seiko Prospex 1986 Quartz Diver’s 35th Anniversary Limited Edition retains the iconic shrouded case in titanium and ceramic and the same, exceptionally robust quartz movement found in the original. 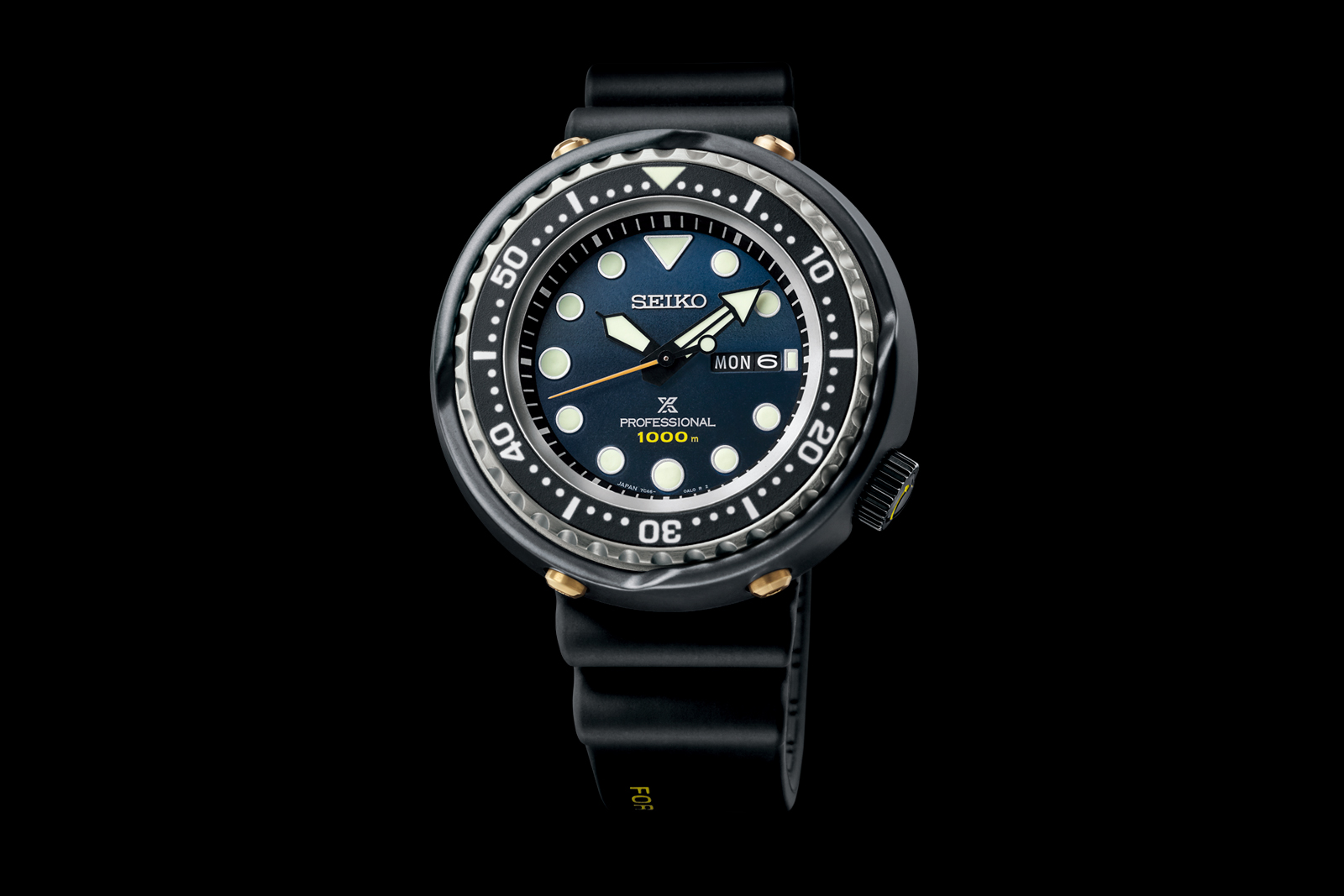 The key design feature of the anniversary model, however, is the gradient blue dial that’s dark blue on the upper half of the dial and fades downwards into black, evoking the depths of the sea. At the same time, the gilded details of the original have been reduced, leaving the gold plating for just screws that secure the shroud as well as the buckle.

The “Tuna” – in all its myriad variations – is an attractive, both for its distinctive style and its legit professional-diver heritage. More notable is the fact that the most basic “Tuna” starts at just a few hundred dollars – though the entry-level models are not true dive instruments – making the design relatively wallet-friendly. 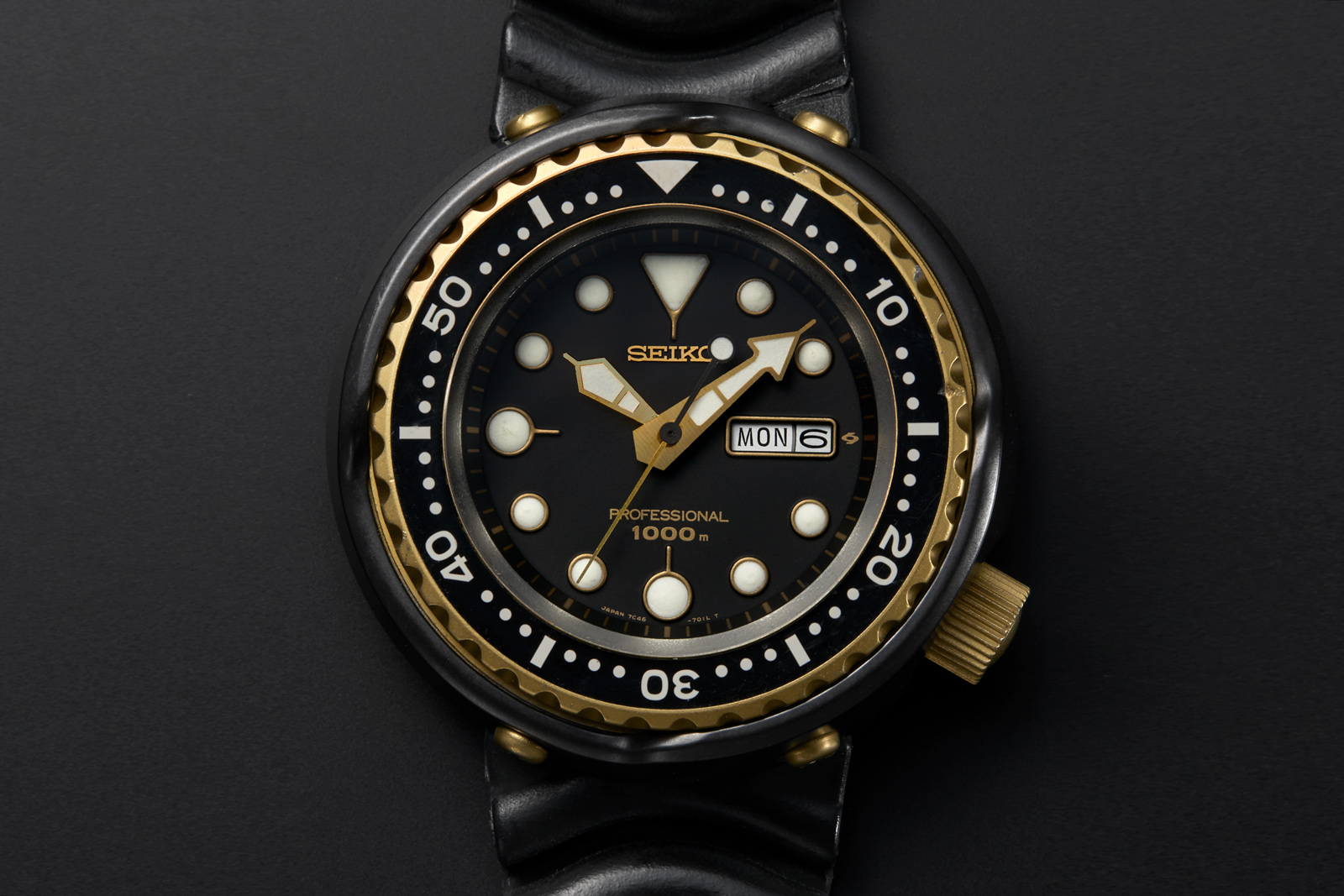 The new anniversary model sits at the higher end of the “Tuna” family, both in terms of construction and water resistance, explaining the price of US$2,600. But it actually a variant of an existing model, based on the all-black, regular-production “Tuna” ref. S23631J1 (or SBBN047). The anniversary edition is fundamentally identical, with the key differences being the gradient-blue dial and gilded details, and a price tag that’s a modest 10% higher than the standard model, which makes it a worthwhile update.

The extra design touches give the watch a handsome look, with the blue dial being going especially well with the yellow seconds hand and depth rating. But the graduated dial finish isn’t original, and brings to mind another heavy-duty dive watch.

All in all, the anniversary “Tuna” is a good looking watch, albeit with a derivative look, at a steep-ish price. 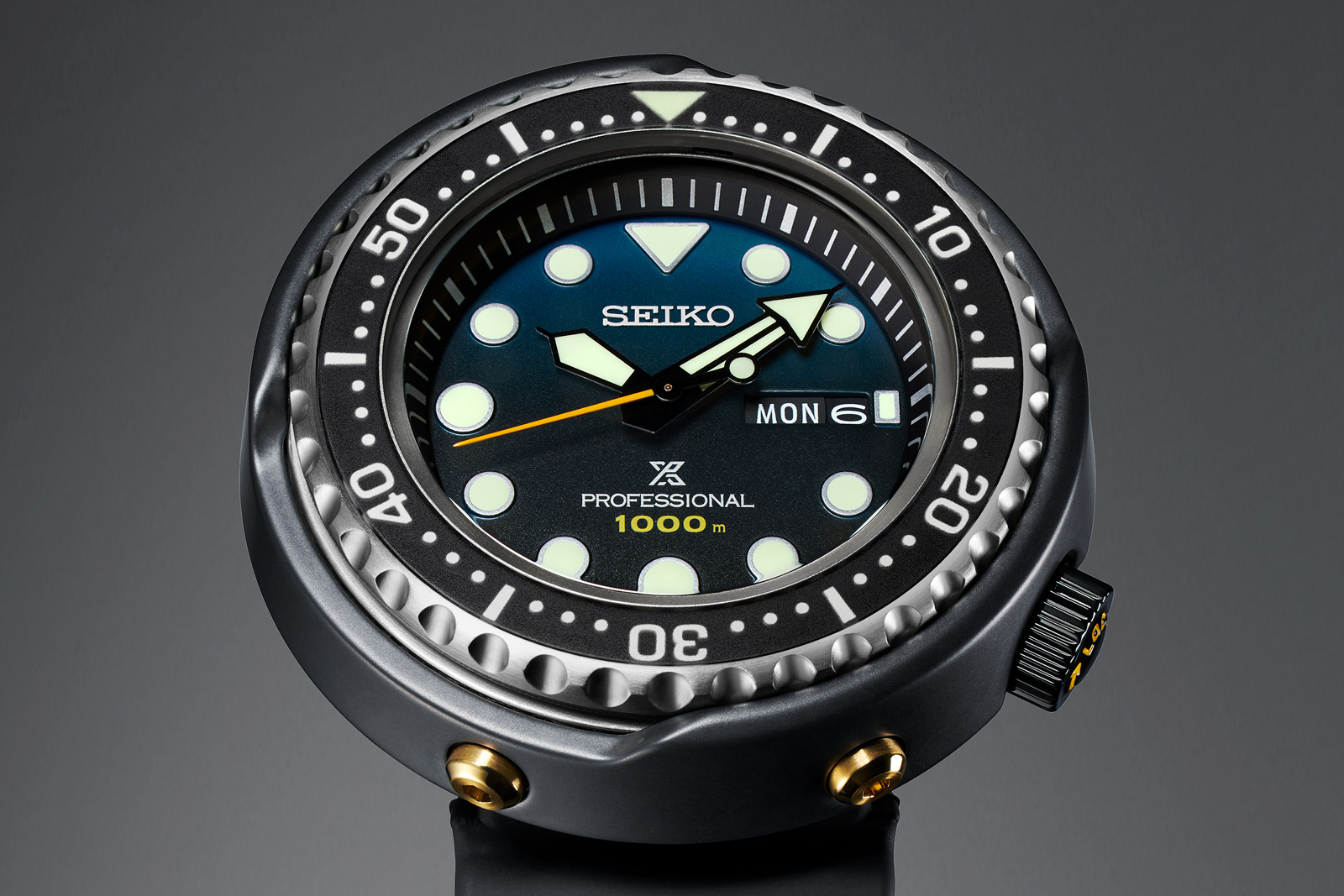 Like several other “Tuna” models, the anniversary diver is rated to 1000 m but mostly likely will perform far better in real life.

The traditional “Tuna” case construction comprises a mono-bloc titanium inner case protected by a shroud made of scratch-resistant ceramic – forgoing the helium escape valve that’s standard on most saturation diver’s watches. A helium escape value releases the helium that builds up within the case during saturation diving, preventing a pressure buildup within the case during decompression to atmosphere pressure, which can cause the crystal to pop off.

Instead of the valve, the “Tuna” case incorporates a patented sealing of the case, preventing helium gas molecules from leaking into the case in the first place. 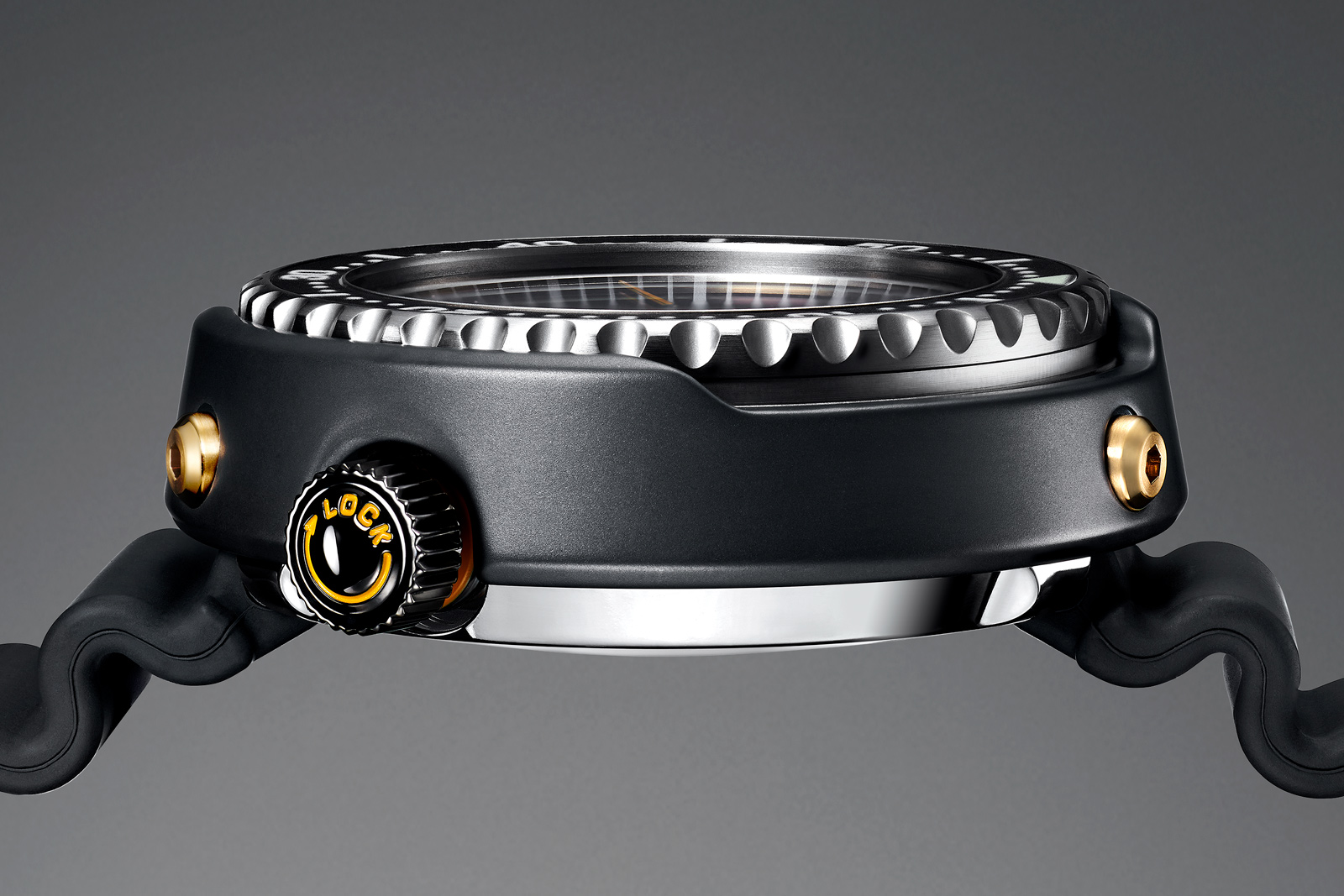 Inside the robust case is the equally robust 7C46, the same movement that was found in the vintage original. But the movement is not a sympathetic recreation of the original.

Instead, the 7C46 has remained in the Seiko catalogue for decades as the go-to movement for the quartz “Tuna” divers, simply because it works extremely well. Conceived a movement that can withstand extreme conditions, the 7C46 is also high-torque – generating enough turning force to move the hands that are large and heavy to maximise legibility. 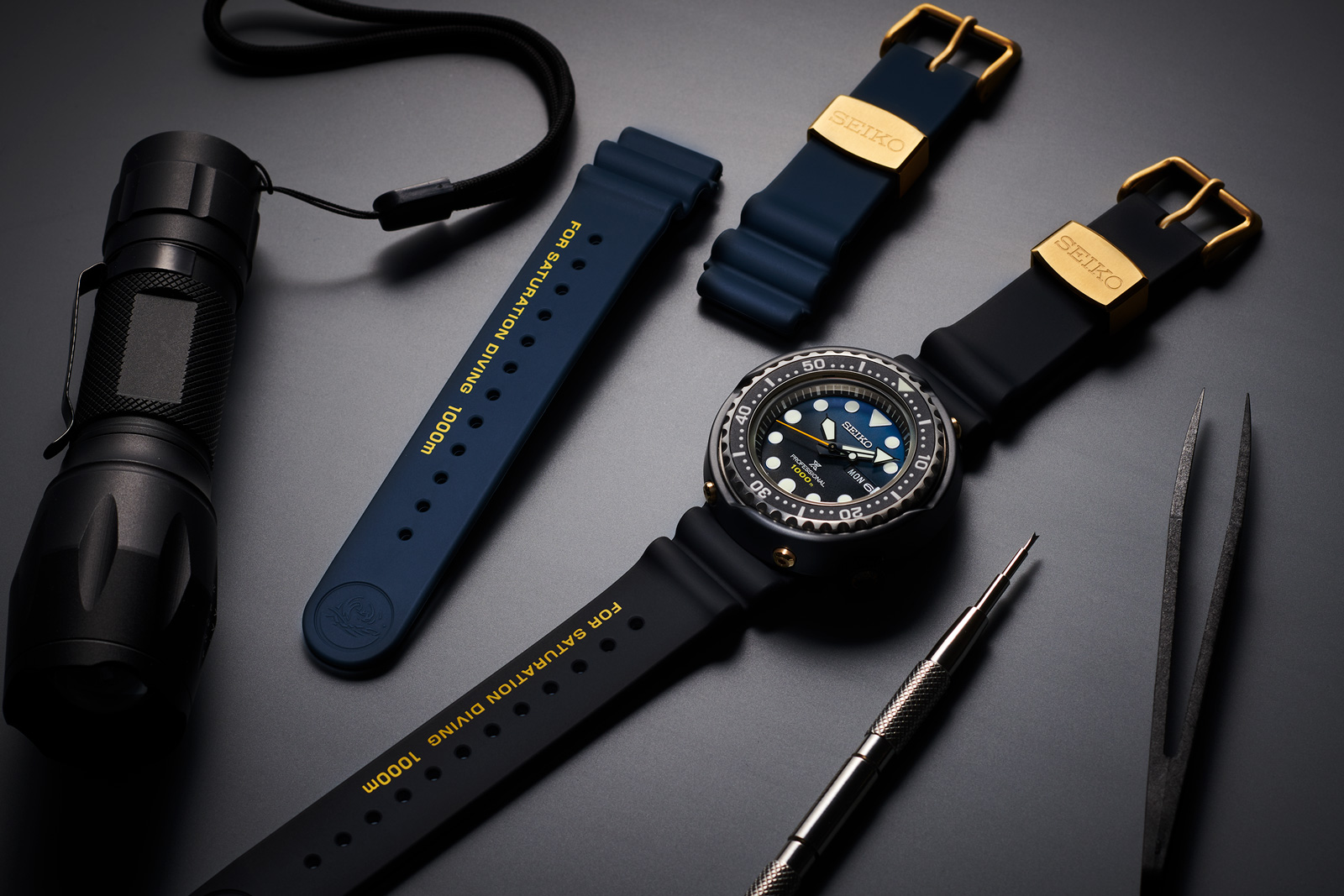 To match the dial, the watch is delivered with a pair of straps, one in black and another in blue