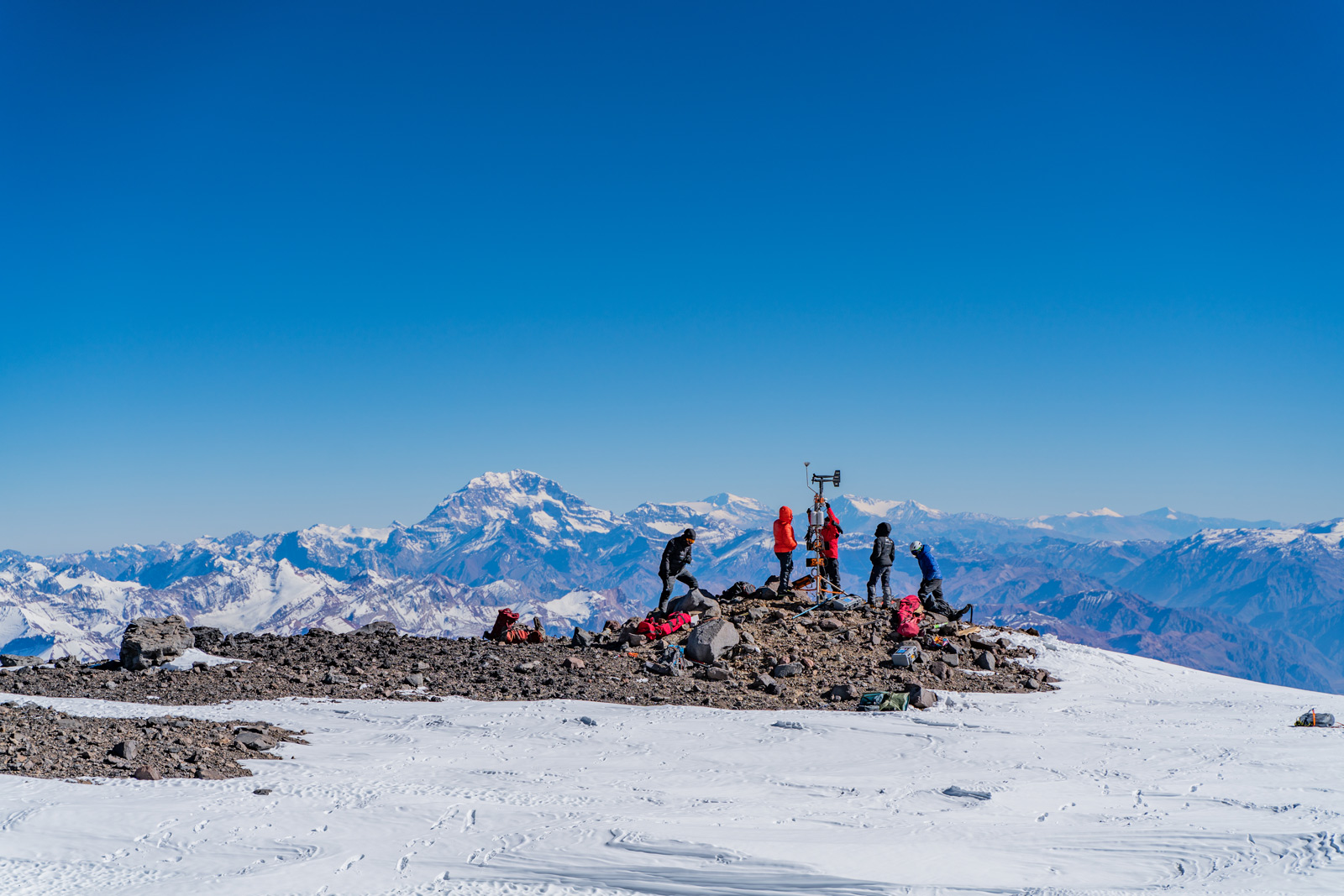 Amongst the projects to tackle climate change that’s being supported by Rolex was the successful scientific expedition to Tupungato, a dormant volcano that’s one of the highest mountains in Americas that sits on the border of Chile and Argentina. Led by National Geographic and backed by the Chilean government, the expedition team embarked on a 15-day trek up Tupungato in early April to install a weather station just below the summit – 6,505 m above sea level – that’s the highest weather installation in the Southern and Western Hemispheres.

The purpose of the expedition was, of course, not to explore the uncharted; such endeavours had their heyday in the postwar era, with Rolex keeping time for many of them. Instead the watchmaker supports scientists and conservationists on expeditions that aid understanding of climate change and its effects – all of which are part of the Perpetual Planet initative. 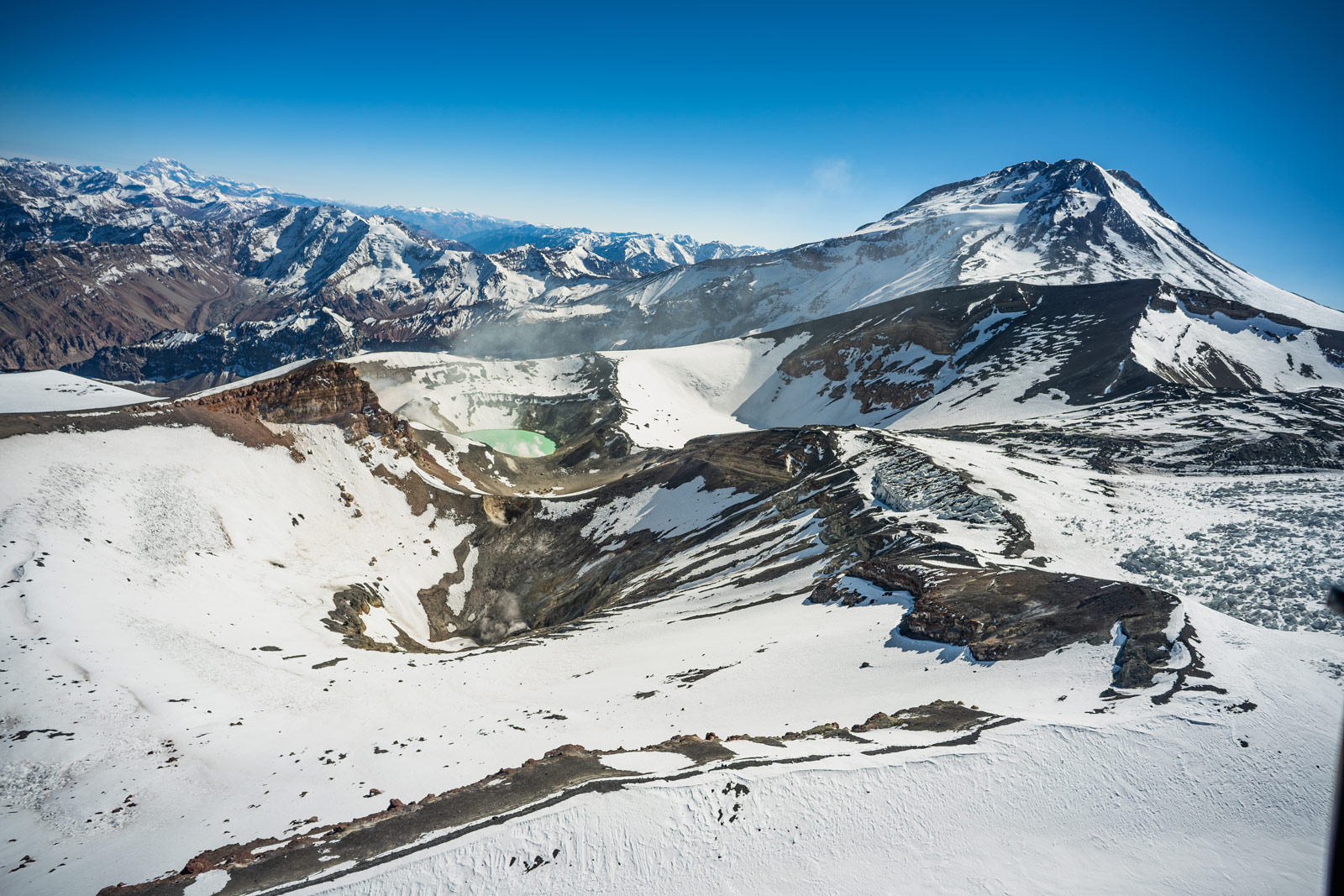 A pillar of Perpetual Planet is Rolex’s partnership with National Geographic, the iconic, yellow-bordered magazine of the National Geographic Society. The partnership seeks to understand and address the impact of climate change, through expeditions and field research that harness data taken at crucial locations that are often harsh and inaccessible.

The partnership’s first expedition took place in 2019, when a team travelled up Mount Everest to set up the highest-altitude weather station in the world – 8,430 m above sea level – at platform near the summit that’s been nicknamed “The Balcony”. Capable of monitoring high-altitude wind streams, the system also keeps an eye on the water sources of the Hindu Kush-Himalayas, which supply more than a billion people downstream.

The Everest Expedition was first in a series of expeditions that explored high-mountain water towers – all documented in great detail and spectacular photographs by National Geographic – that now began in the Himalayas and then moved on to the Andes mountain range with the Tupungato expedition. But first, why are water towers worth climbing up to the roof of the world to investigate? 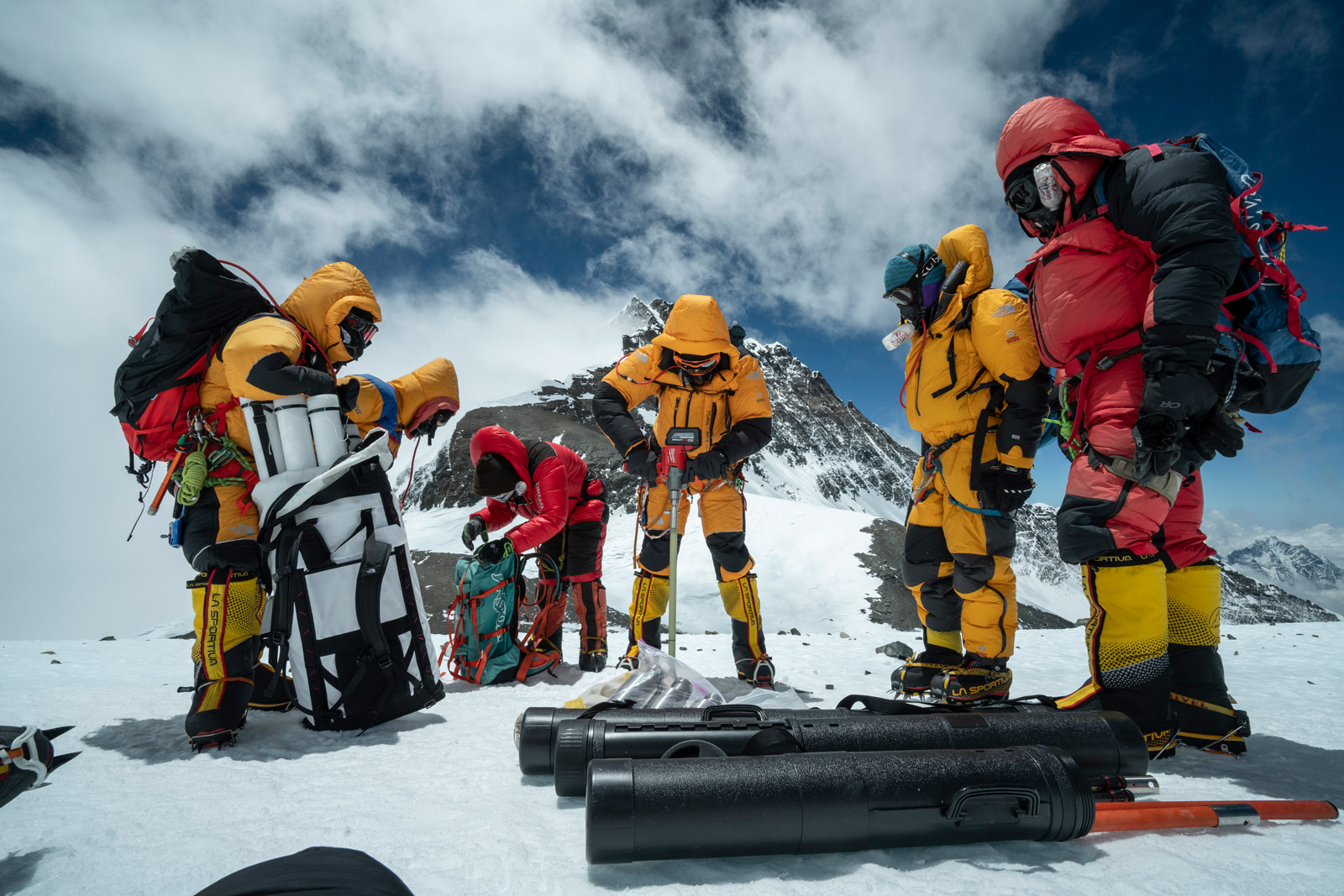 The Everest Expedition of 2019

A stop in Earth’s water cycle, natural water towers collect and store fresh waters on mountaintops and supply water to the people who live at lower elevations in the surrounding regions.

With glaciers and ice caps containing around 70% of the world’s fresh water, half of the world’s population depends on water that flows from mountains. That stands in stark contrast to the fresh water that’s readily available in the form of surface water, like that in lakes and rivers, which is just 1% of the total.

In fact, the water stored in the Hindu-Kush Himalayan mountains eventually reaches some two billion people, or about 20% of the world’s population, providing water for drinking, agricultural, and other crucial activities. But growing populations has increased downstream demand for water, exacerbating geopolitical conflicts as water supplies struggle to keep up.

At the same time, global warming is occurring at a faster pace in high-elevation, mountainous regions than elsewhere. Climate change has changed the natural cycles of the mountains, altering the timing and rate of precipitation of snow as well as melting of glaciers, which has made the water cycle unpredictable. Water towers, in other words, “are in trouble”.

The magnitude of the trouble, however, is not understood in detail as insufficient real-time data is available at such altitudes, hence the necessity of high-altitude weather stations. 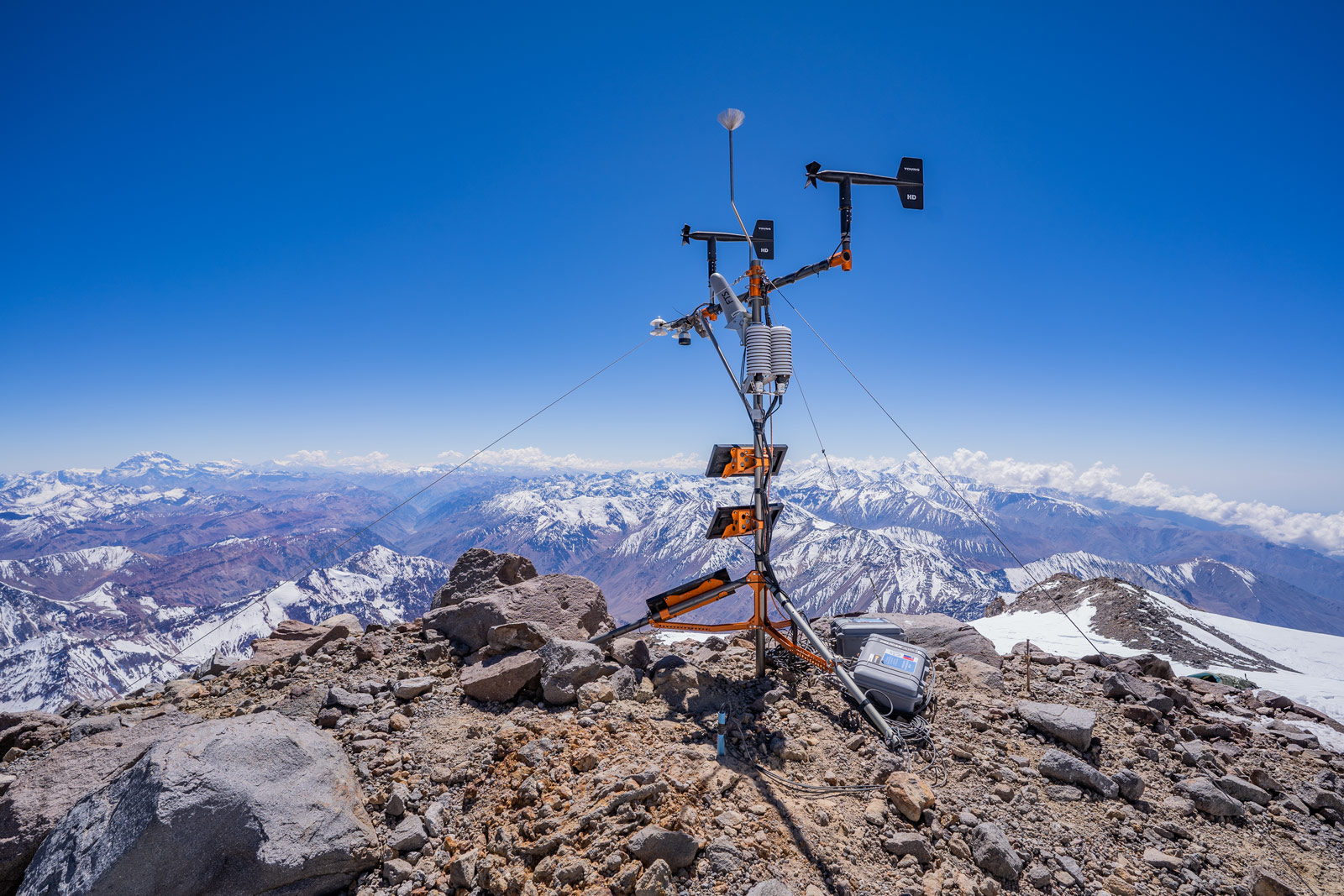 Sitting pretty at 6,505 m above sea level – the weather station on Tupungato

Research shows that some of the most vulnerable water towers are in Asia and South America, making the Hindu-Kush Himalayan water tower a sensible first stop for the National Geographic team. With the Mount Everest weather station in place, the team moved on to South America, where they set up a second tracking station on Tupungato, which has been dormant for many millennia.

Tupungato is part of the Southern Andes water tower, which supplies fresh water to more than six million people in the area around the Chilean capital Santiago. In addition to demand for water, supply has been constrained by a drought that’s the most serious faced by the region in the last century.

According to Tom Matthews, a climate scientist on the Tupungato expedition who was also part of the Everest team, global warming accelerates the rate of glacier retreats, which means declining fresh water sources over time.

The rising demand for water and declining supply intensified the need for better meteorological data, especially at the the top of the mountain, in order to better predict hydrological activity as well as initiating mitigations.

And improved, real-time data collection was the goal of the National Geographic team that ascended Tupungato. Led by two scientists – Dr Baker Perry, a professor at Appalachian State University who also led the 2019 Everest Expedition; and Dr Gino Casssa, Head of the Glaciology and Snow Unit at the Chilean Ministry of Public Works – the team pulled off the 15-day mission to install a weather station just below the summit on Tupungato. 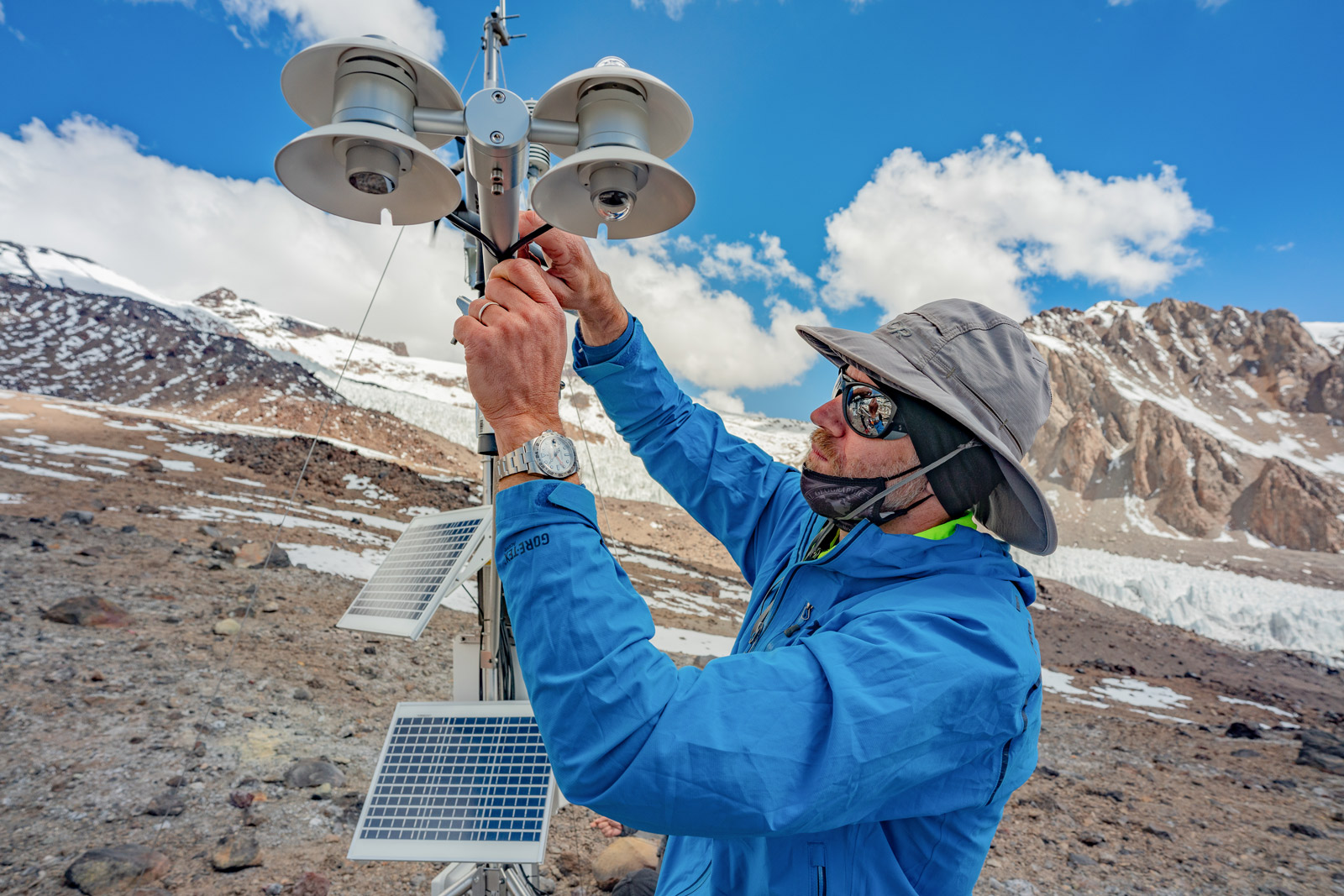 Dr Perry, with a Rolex Explorer II on his wrist

Working at over 6.5 km above sea level, the team installed a monitoring station of lightweight aluminium secured by a trio of steel cables. The station’s slim construction belies its remarkable resilience – the station is engineered to withstand wind speeds of over 320 km per hour.

The new station complements three monitoring stations at lower altitudes installed in 2019. Collecting environmental data like as temperature, windspeed, and snowfall, the stations will paint a clearer portrait of climate change in the region, which in turn will inform the decision making of local officials in ensuring the population’s access to water.