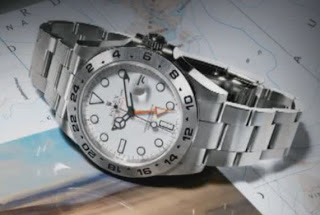 ﻿﻿﻿﻿﻿﻿﻿﻿﻿﻿﻿﻿﻿﻿﻿﻿﻿﻿﻿﻿﻿Last year a Rolex promotional video was making its rounds on the internet. It showed the 2010 collection with one addition, what appeared to be a new Explorer II with the enlarged case of the new Submariner and an orange hand a la freccione or Steve McQueen ref. 1655.

The story goes that the watch was originally slated for 2010 release but pulled at the last minute, and the video was released by accident. So it was not hard to guess one of the watches Rolex just unveiled at Baselworld 2011.

The new Rolex Explorer II is 42 mm, larger than the Submariner and GMT-Master II but smaller than the Deep Sea. It contains the new 3187 calibre.