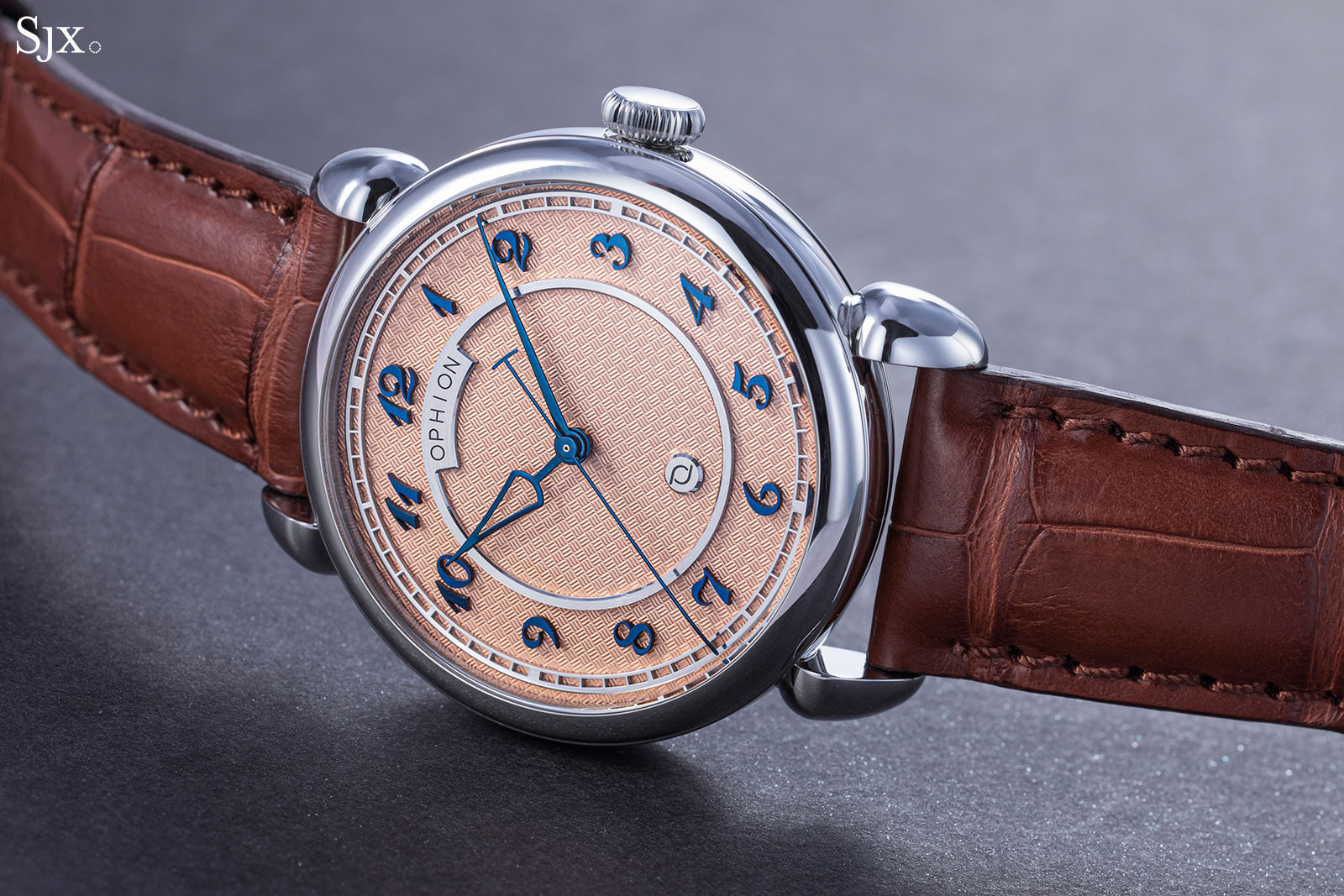 A Spanish brand that got its start in 2016, Ophion has refined its offerings substantially since then. Two years ago Ophion debuted its third and most accomplished model, the OPH 786 Vélos. Though based on the original OPH 786 that has a hand-wind movement with a five-day power reserve, the Vélos does everything better.

While the design relies on familiar elements like Breguet numerals and teardrop lugs, the Vélos boasts notably fine details. The Breguet numerals, for instance, are applied and elegantly formed, while the guilloche is tidily engraved.

But the Vélos gets there almost entirely by machine, mostly CNC milling, which means it is more affordable than it looks, with the guilloche version priced at about US$3,700. 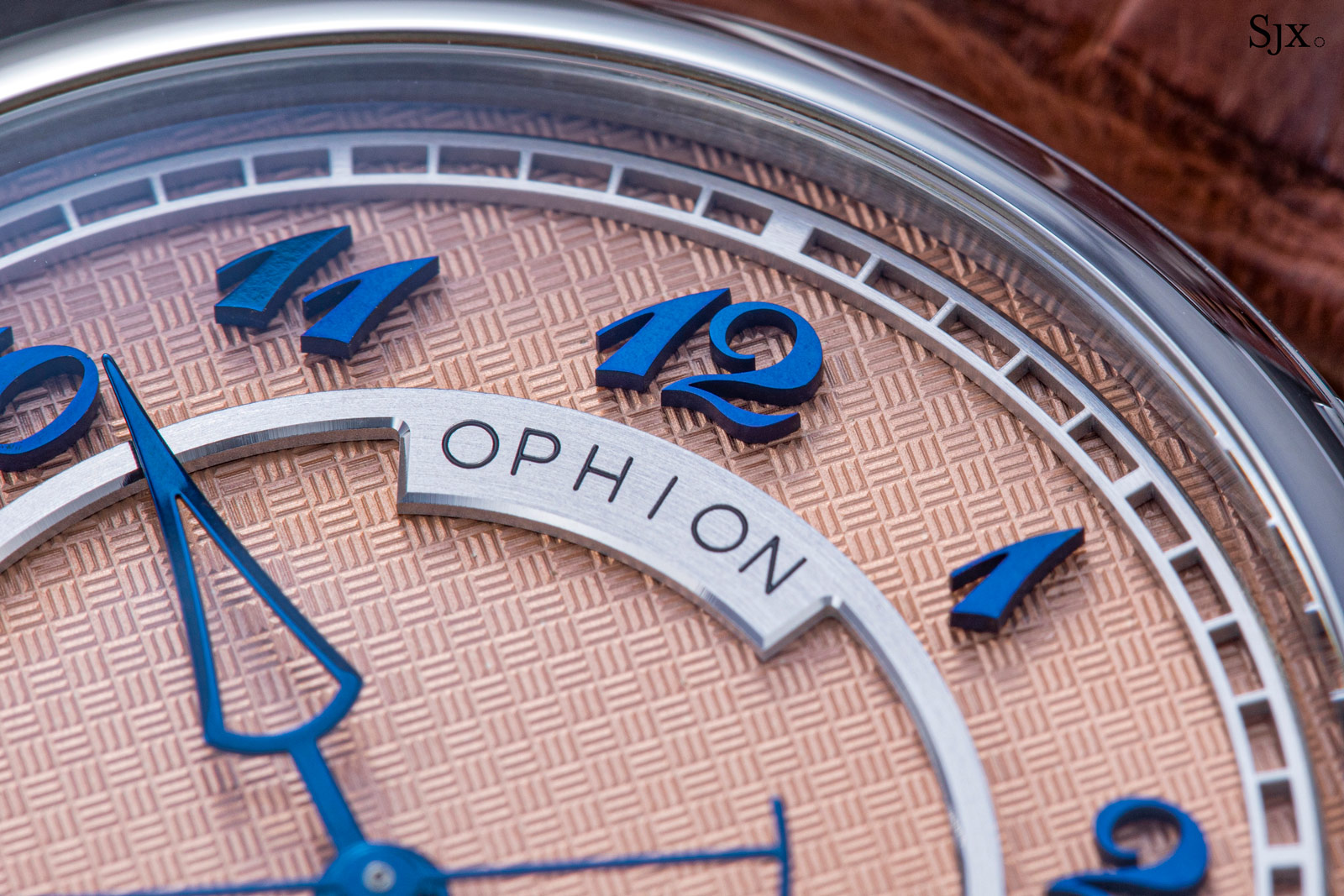 The Vélos is a good looking watch. Admittedly, the look is fairly generic in its classical design, but it has charm, especially considering the quality of execution relative to the price. A strong value proposition is the best way to describe the Vélos.

Even though it is made entirely by machine, the dial is the best feature of the watch. It boasts a strongly three-dimensional appearance, thanks to the substantially-sized appliqués. And because the dial parts are made by machine, they are precisely shaped, which gives it an expensive look. 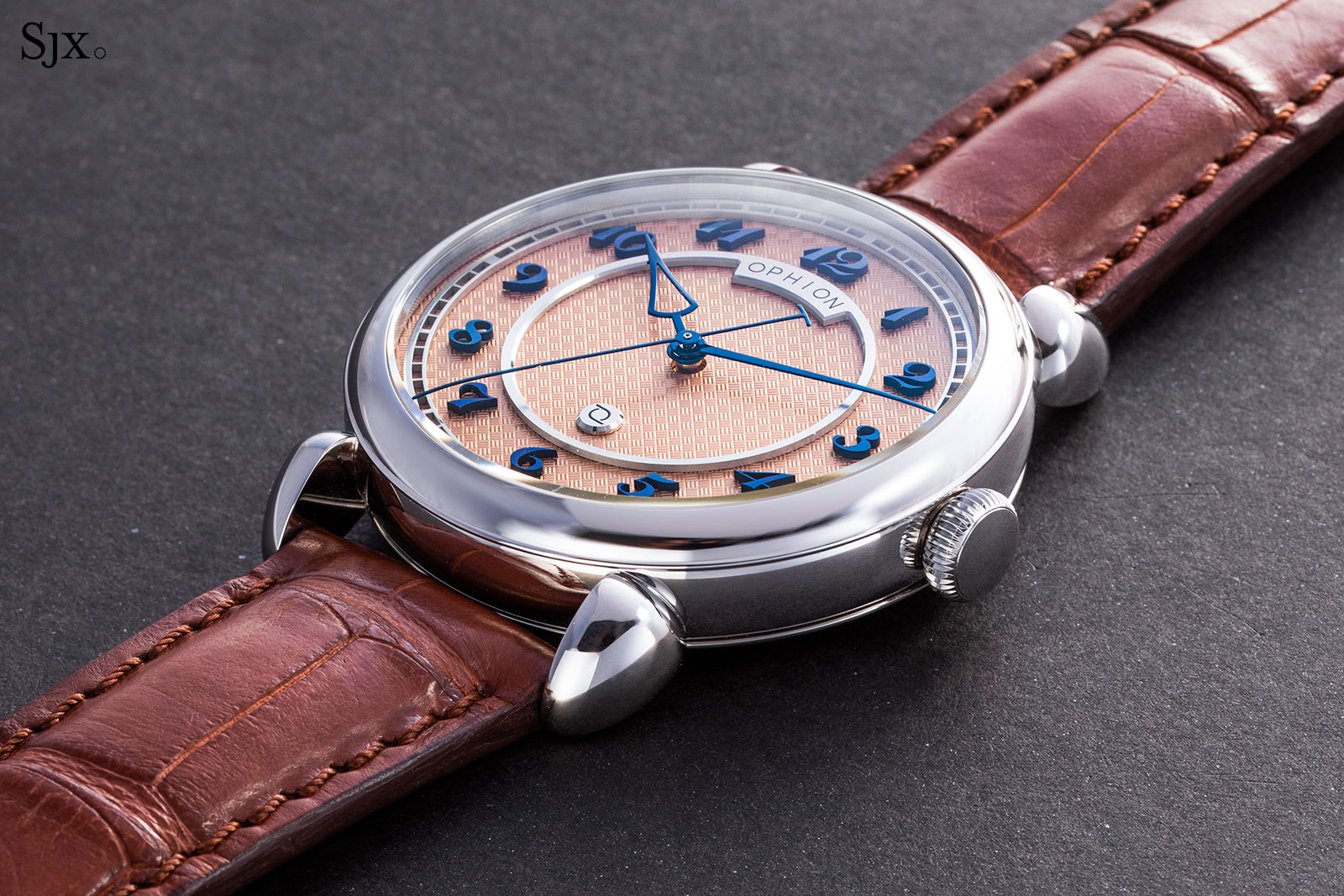 The movement is also a key factor behind the value proposition. It’s a solid calibre with useful features, including a five-day power reserve. And it has been extensively customised for Ophion, with its finishing done by machine, just as with the dial.

That said, the design of the movement doesn’t quite match the rest of the watch. The bridges are inspired by 19th century pocket watch movements, while the front of the watch is decidedly more 20th century. 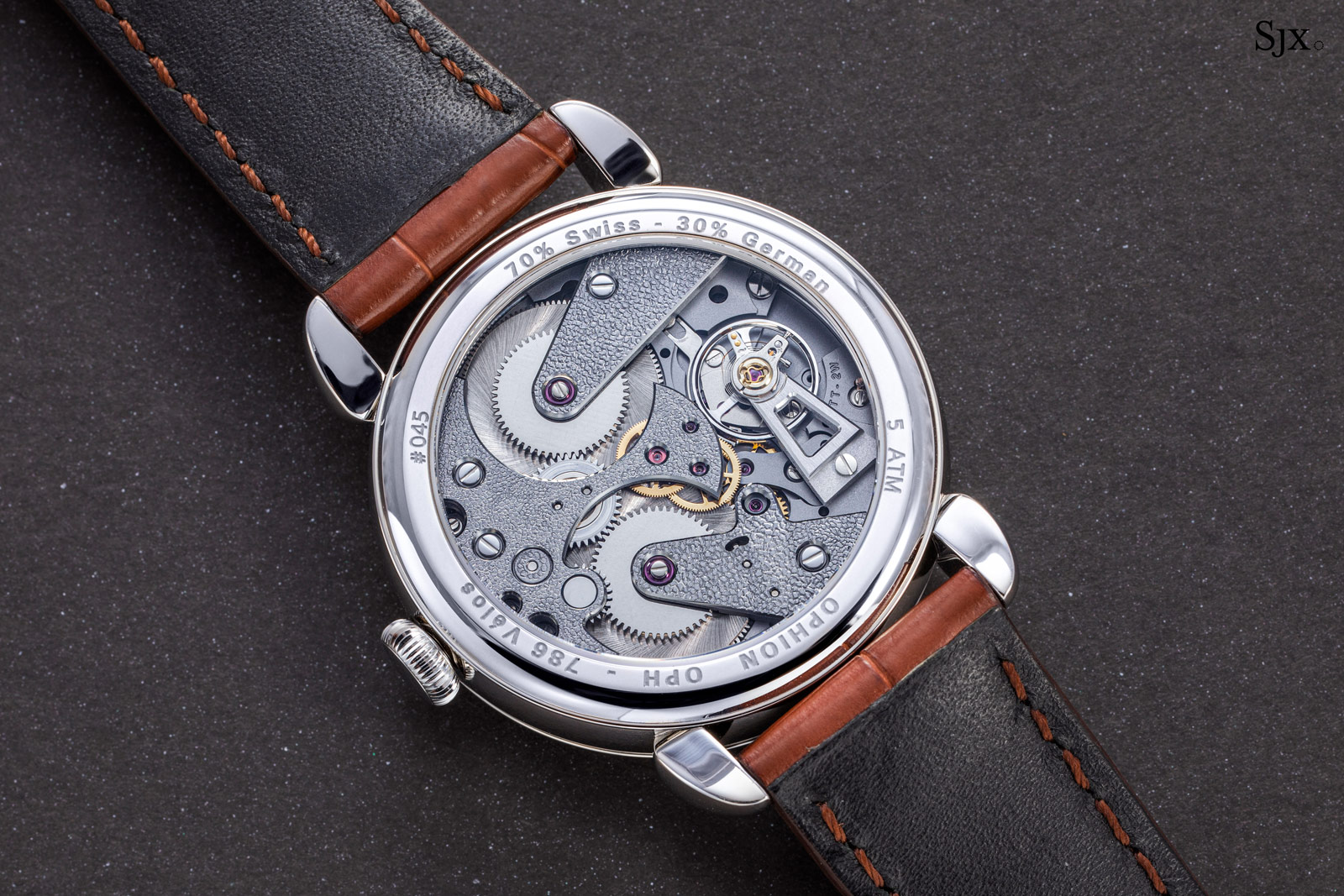 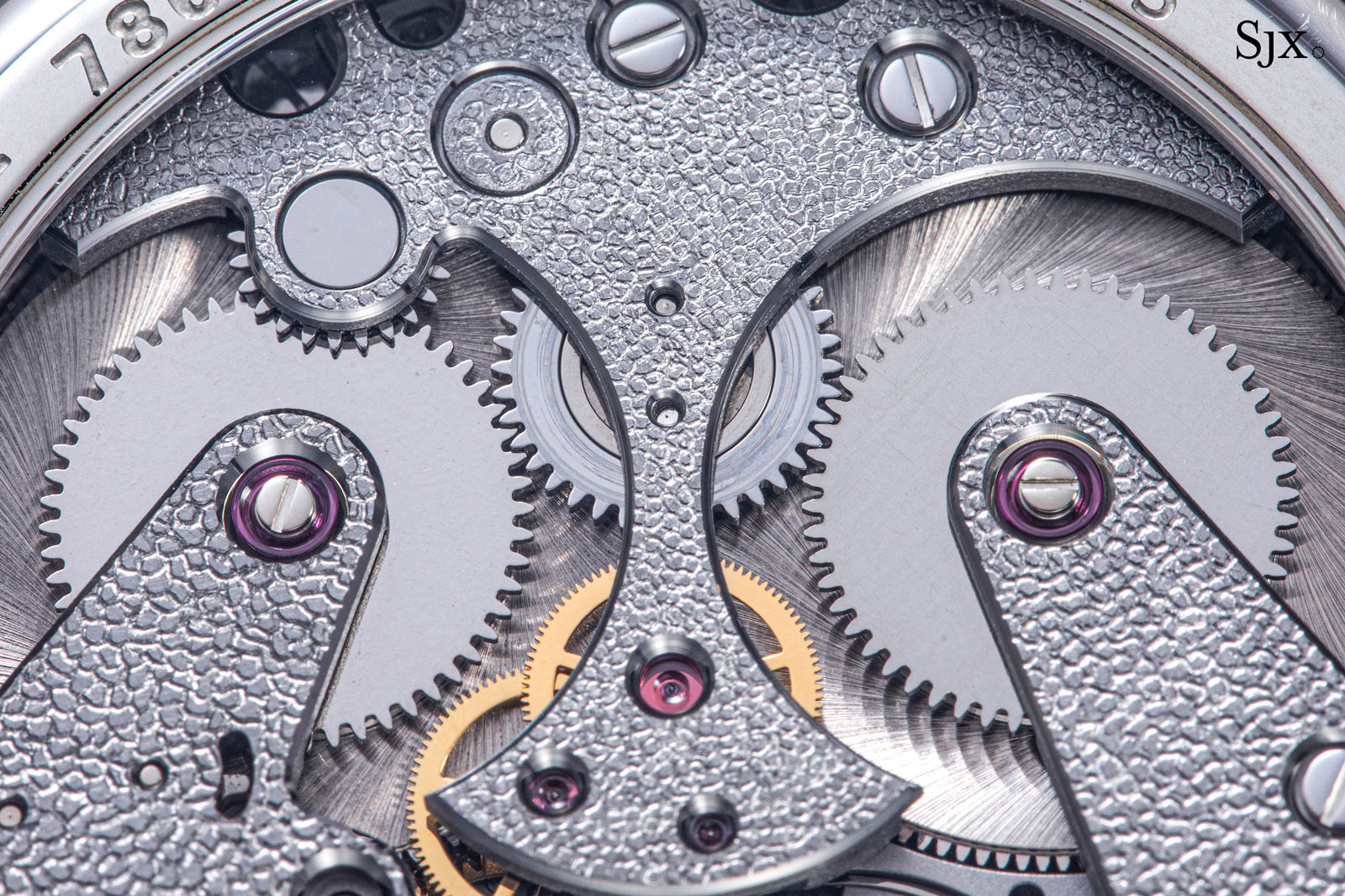 The Vélos occupies a spot along the price spectrum that’s not crowded (yet). It costs less than more elaborate watches from brands like Laine, but is fancier and pricer than say, the offerings from Baltic. Needless to say, the Vélos is good value.

One caveat relating to the price is that the Vélos is not immediately available. It is sold via pre-order with a 50% deposit upfront and the balance on delivery, which at time of writing is September or October 2021. 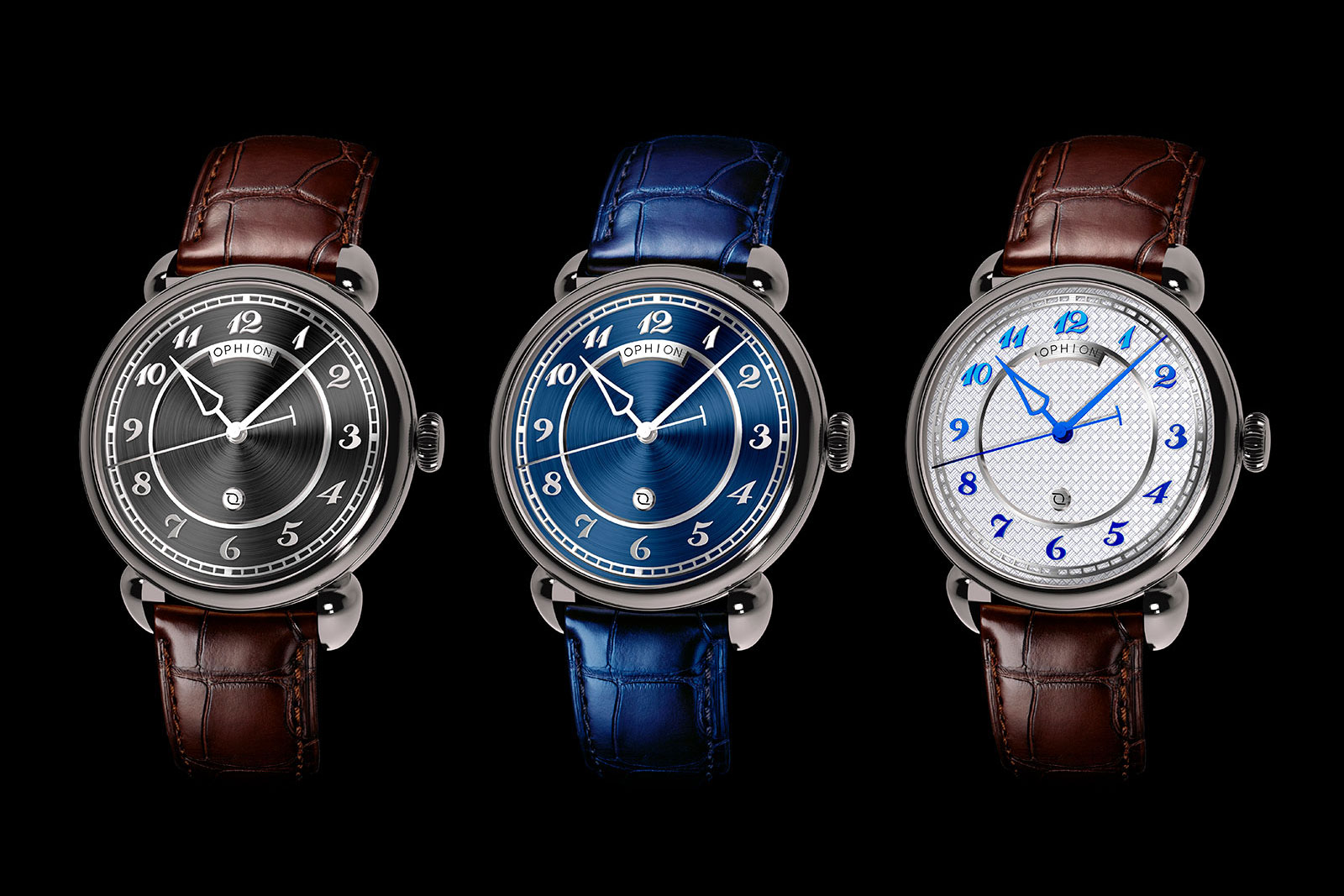 Finally, some thoughts on the dial variants. The Vélos is available with either a circular grained or guilloche dial, with the latter priced at about US$250 more – an upgrade that’s well worth it.

However, both the silver and salmon guilloche dials are available only with blued numerals and hands. That’s a high-contrast look on the salmon dial, which could do with the option of rhodium-plated hands and markers.

Most of the dial design is familiar, with the Breguet numerals and blued steel being typical of classically-inspired watches that are popular today. The exception is the hour hand, which is an oversized arrow. That’s where the model name comes from – velos is Greek for “arrow”. 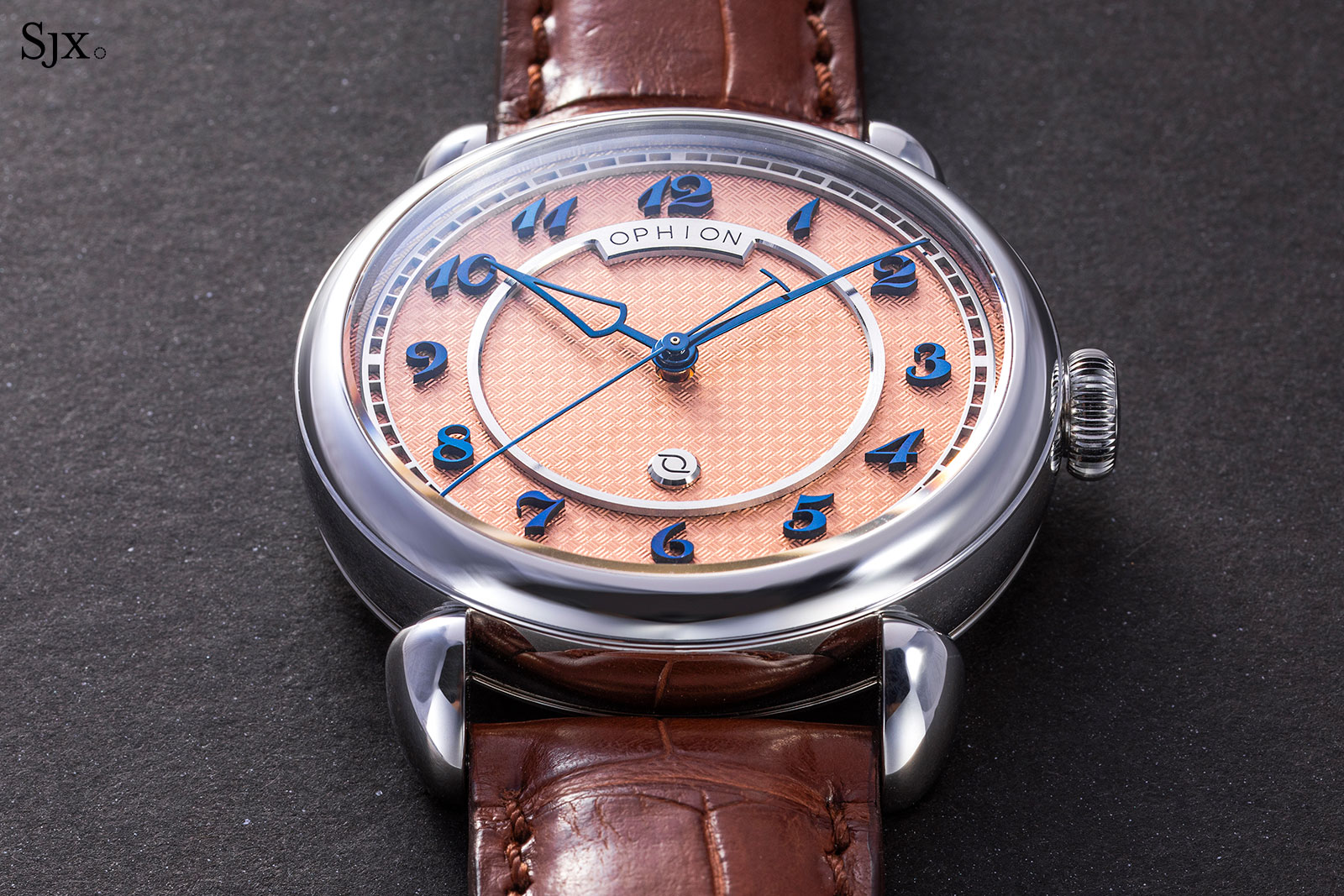 But the dial is a surprise in the metal, because it has an unexpected degree of fine detailing. Sitting under a gently domed sapphire crystal, the dial is decorated with basketweave guilloche, but everything on its surface is applied, even the railway minute track. 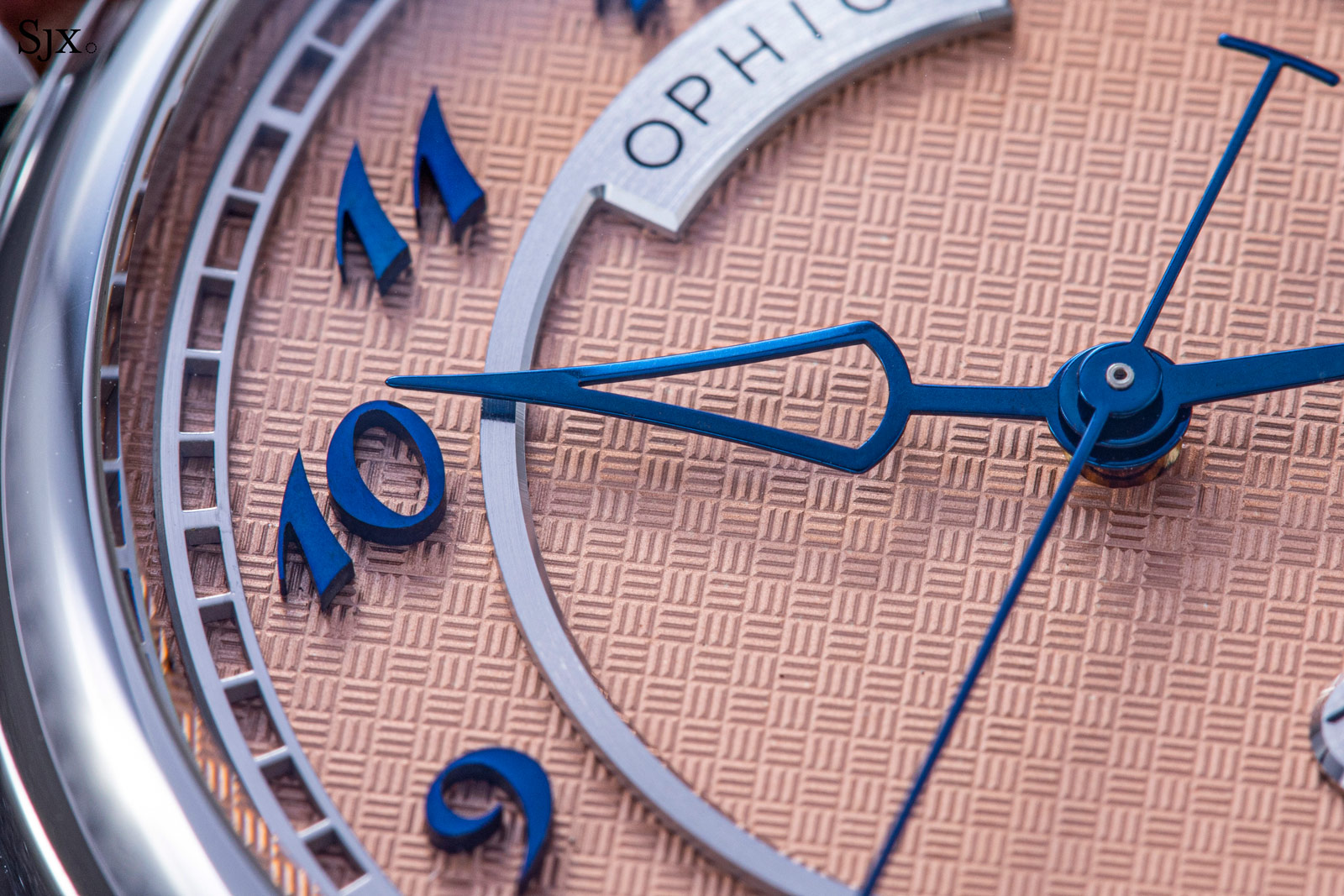 The dials for the Vélos are produced by Cador, a dial maker based in Eimeldingen, a town in Germany that sits near the border with France and Switzerland, just 20 minutes away by car from Basel.

Ophion and Cador have smartly relied on automated methods – along with shrewd design – to create a dial that is strikingly elaborate for an accessibly-priced watch.

Zoom in and the extensive use of CNC milling is obvious. Every element on the dial is milled, explaining the precisely-defined edges. And the same goes for the guilloche dial, which is engraved with a CNC machine, again creating a neat pattern. 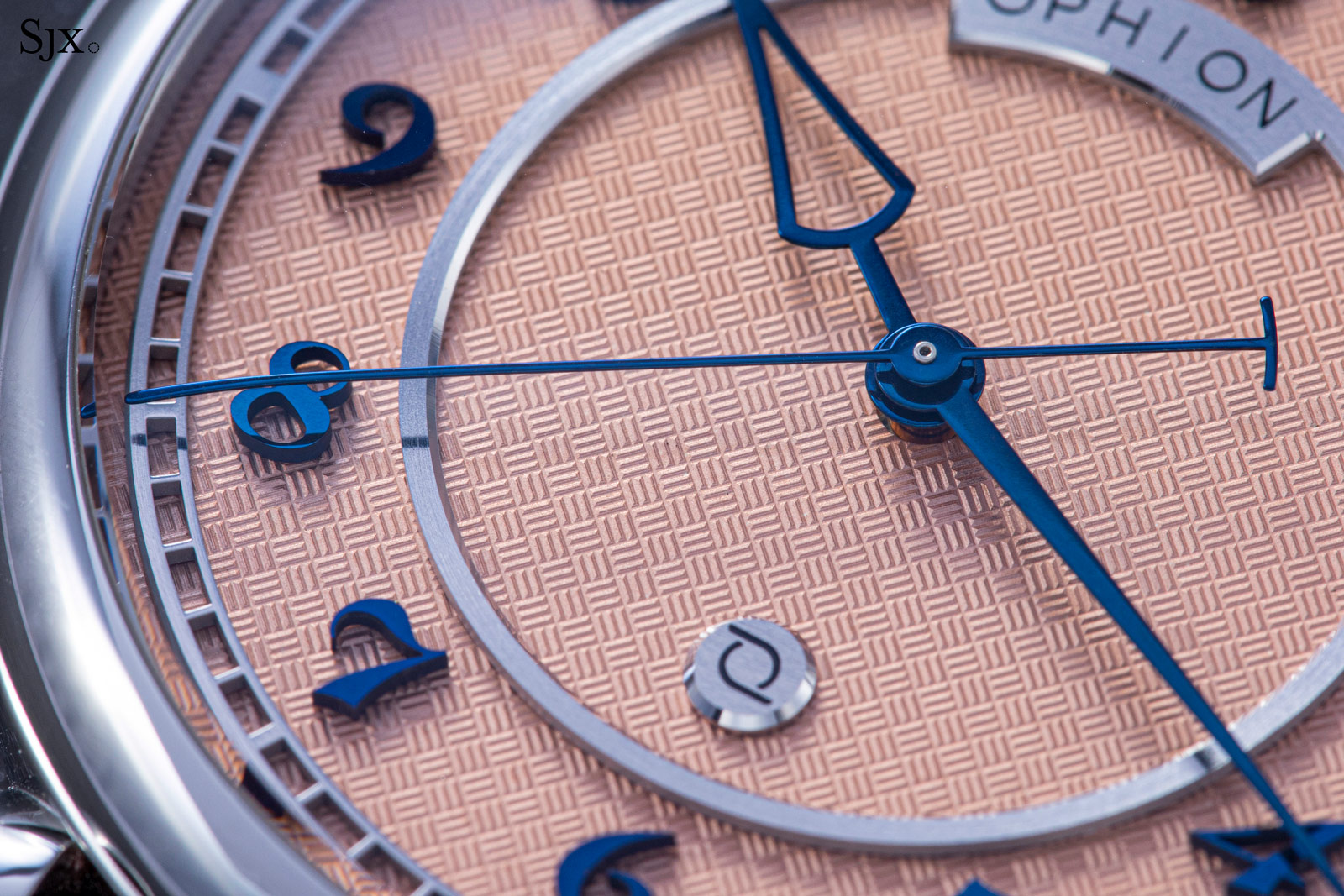 Most of the components are the result of several operations. The minute track, for instance, is cut by laser to create the apertures that define the minute markers, and also milled with a diamond-tipped drill bit to bevel its outer edge, before finally being brushed with a concentric graining.

Similarly, the ring around the centre of the dial has its inner edge milled to create a bevel and then brushed. Together, this ring and the minute track frame the hour numerals, which are also the product of a CNC mill.

The hands and numerals have a convincing blue hue, but they are coated via a chemical process, rather than heat blued the traditional way. 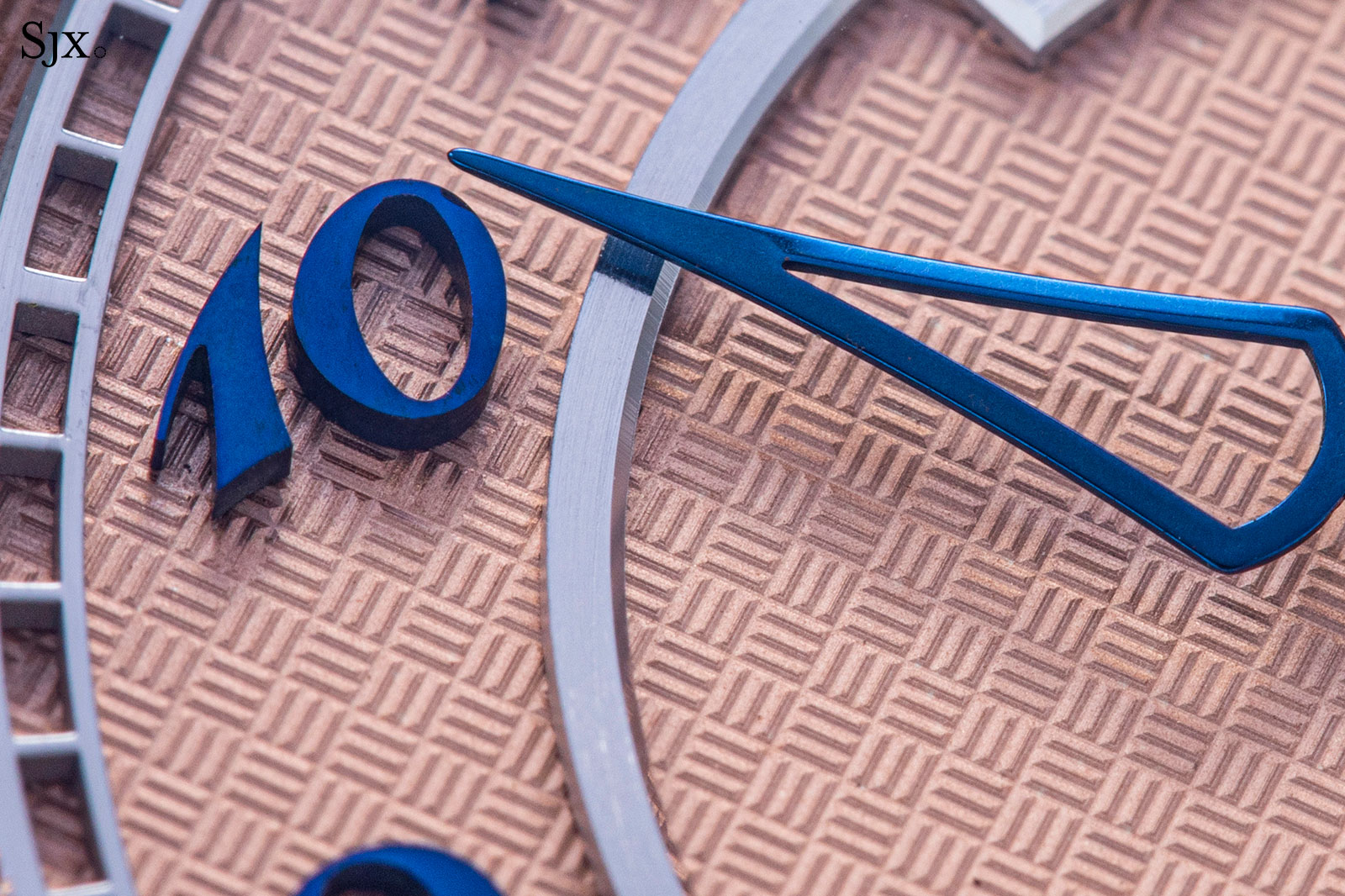 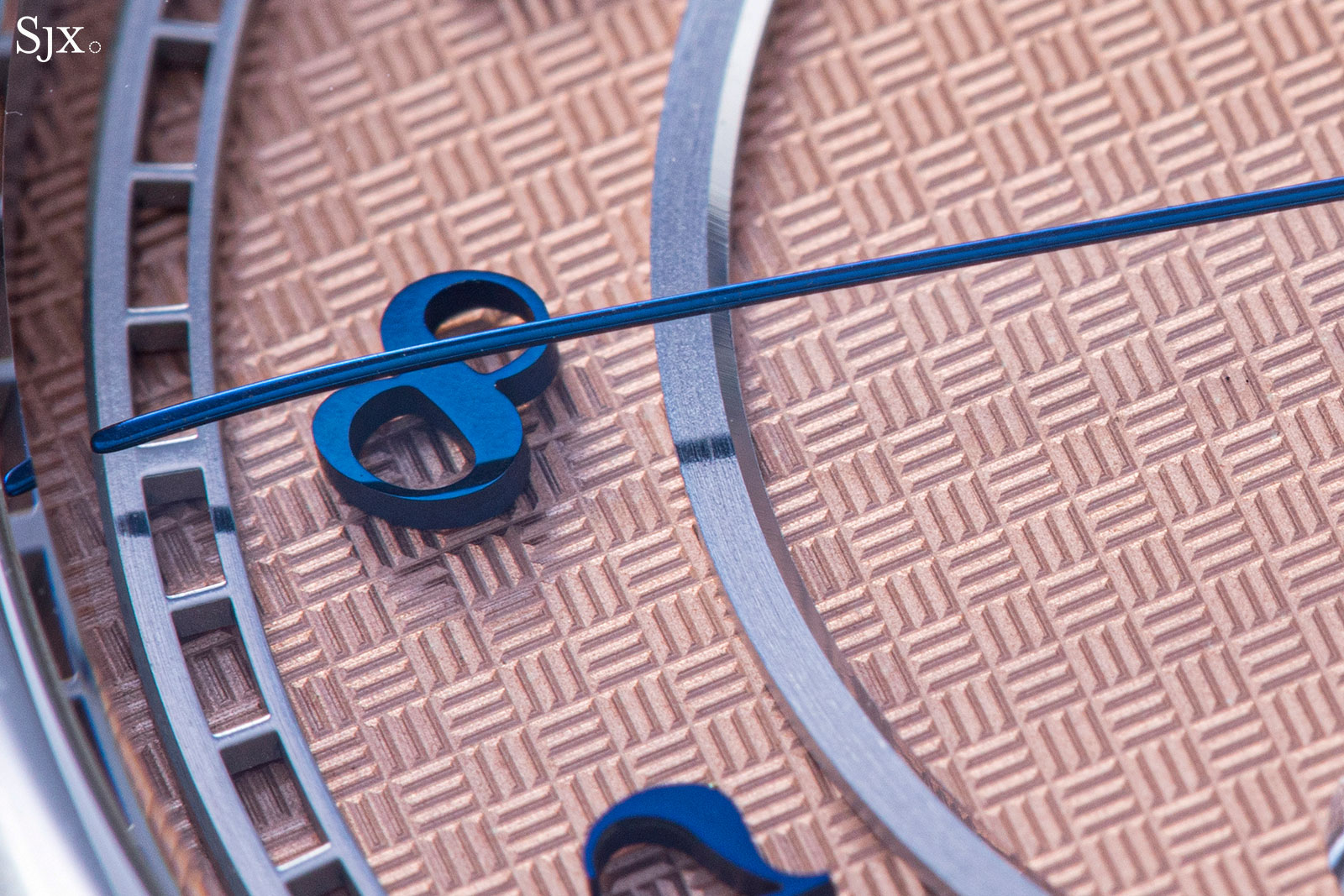 I admire what Ophion has achieved with the dial, and also how it looks. Both the style and quality of the dial are impressive.

But one element could be done away with: the Ophion logo at six. The medallion bearing the logo is finished as well as the other bits of the dial – its outer edge is sharply milled – but the medallion is superfluous, particularly since the brand name is already present under 12 o’clock and the modern emblem doesn’t suit the dial design. 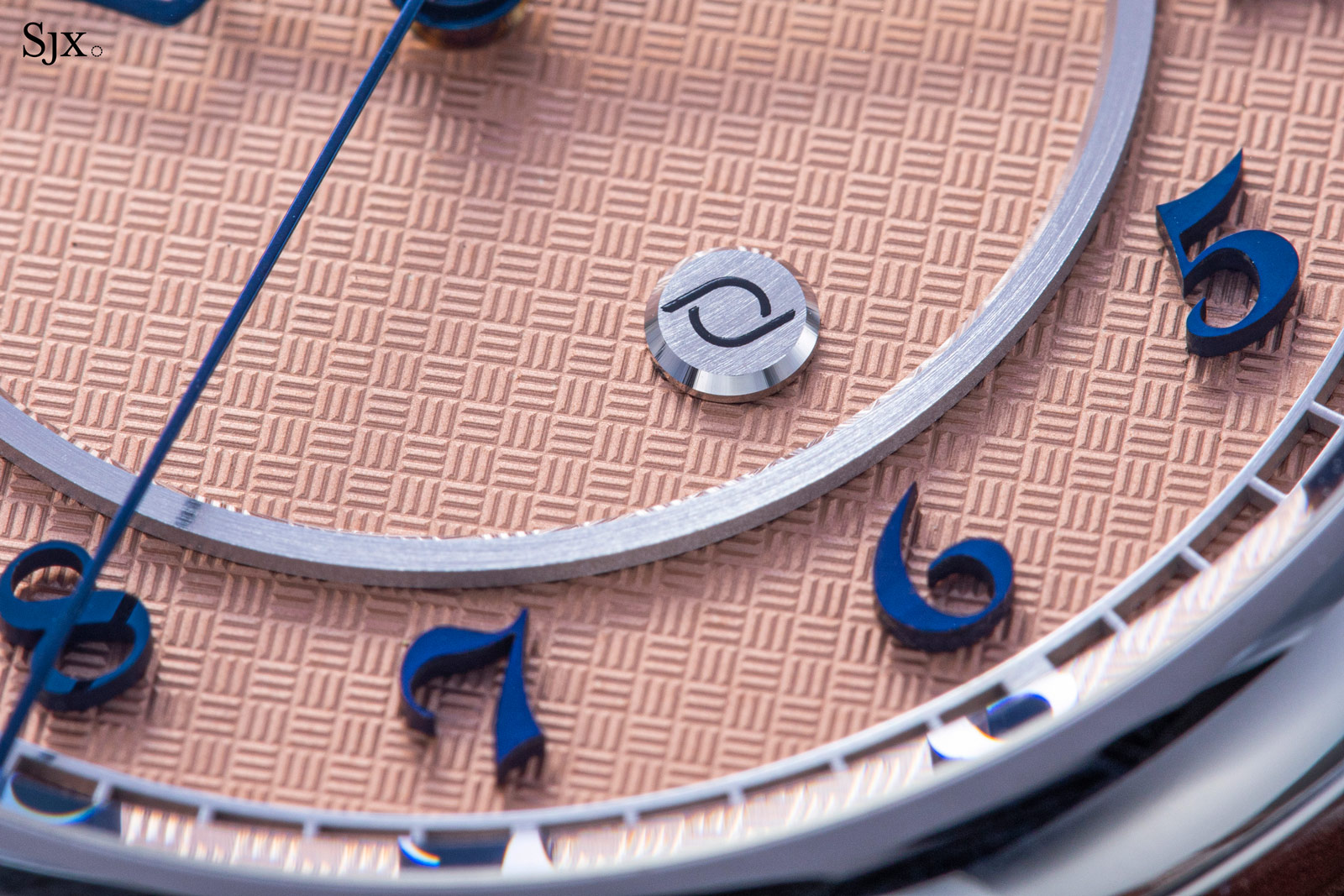 Like the dial, the case is a well-known style. Though they brings to mind Voutilainen, teardrop lugs were common in the mid-20th century, though the Voutilainen association is probably not coincidental.

Measuring by 39 mm by 10.45 mm, the case is a wearable size that’s just nice. It’s substantial, but neither too big nor too thick. And it’s made up of rounded surfaces, which gives it a comfortable feel in hand. 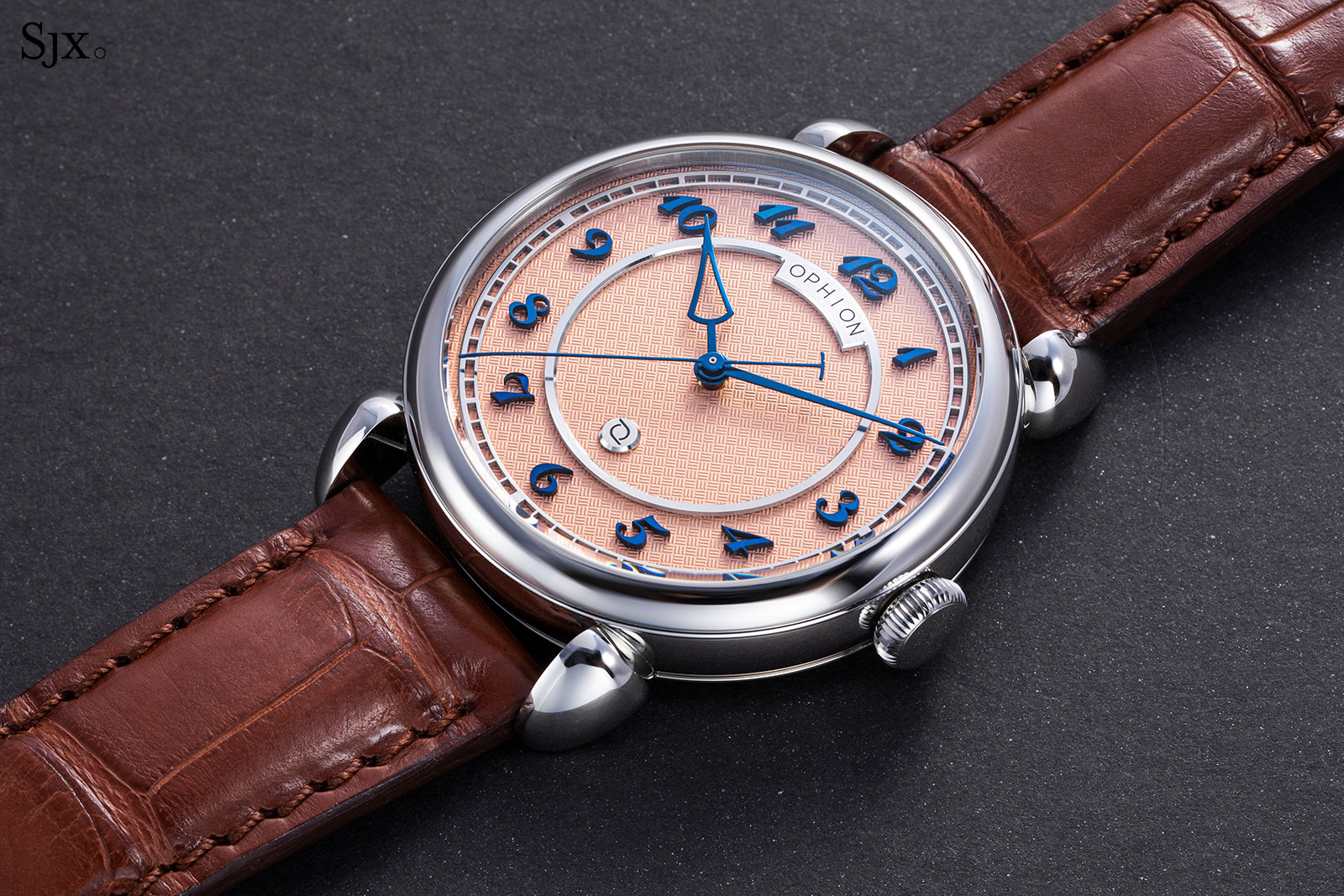 The case is simple in form, but high quality and robust. Each of the teardrop lugs are welded to the case band, a necessity given the style of the case, but uncommon at this price point.

The appeal of the case also stems from the quality of finish – it’s entirely mirror polished to an even, lustrous shine. 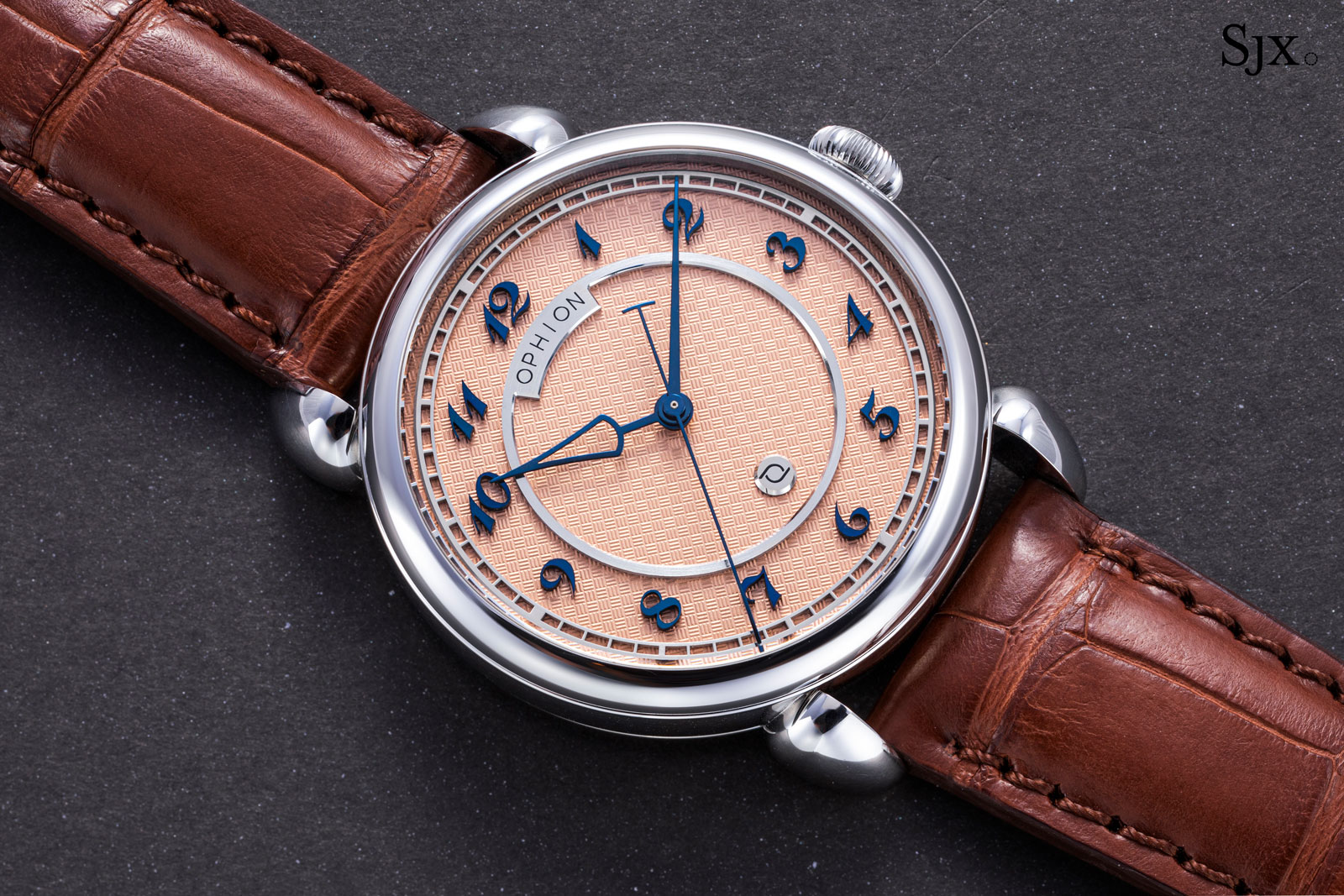 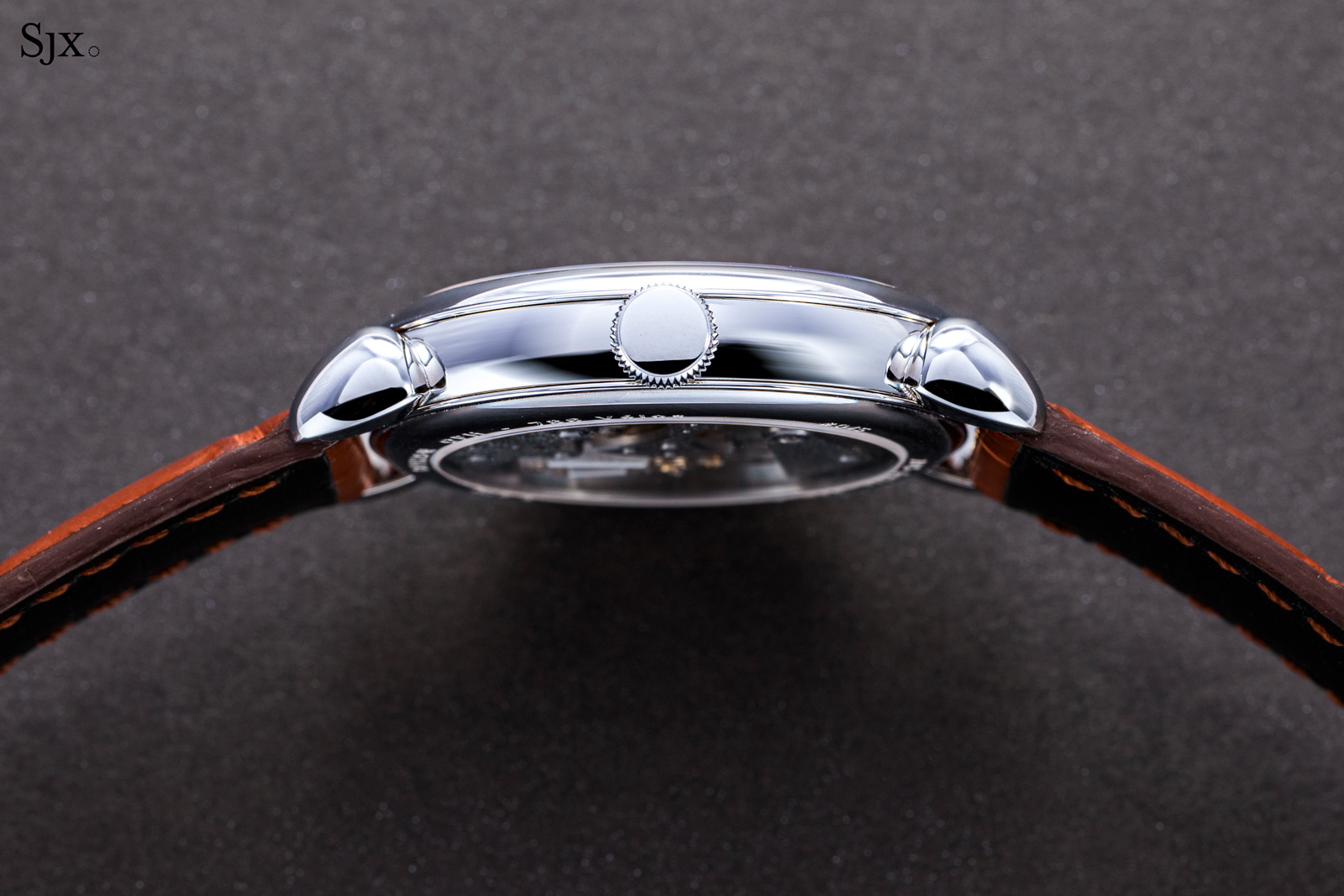 Like the dial, the case is marked out by its strong design and pleasing proportions. The lugs, bezel, and crown are just the right size and shape. In fact, the bezel is relatively tall, while the case back is flat, giving the watch an elegant profile with a strong vintage flavour.

In fact, the profile of the watch, with its short, bulbous teardrop lugs and lips at the bases of the bezel and back, is quite similar to Voutilainen’s. And the case is produced by Voutilainen & Cattin, the case maker part owned by Voutilainen, which implies genes are partly responsible for its appearance. Since its founding, Ophion has relied on the TT 718, a hand-wind calibre developed by Technotime. But barely a year after Ophion debuted its first watch, Technotime went bust. The failure of its only movement supplier might have proved fatal for Ophion, but fortunately Soprod acquired the assets of Technotime.

Soprod is a movement maker owned by Festina, a smallish group owned by low-key watch tycoon Miguel Rodríguez that generates most of its revenue from low-end watches like Jaguar and Lotus. The group also owns pricier, niche brands Perrelet and Leroy, as well as MHVJ, a maker of complicated movements. But far more substantial is Soprod, which is best known for the workhorse A10 movement, an ETA 2892 substitute.

The TT 718 was one of Techotime’s higher-end movements, and now it occupies a similar position in Soprod’s line up. The basics of the movement are twin barrels and a five-day power reserve, making it a rare offering at this price point. 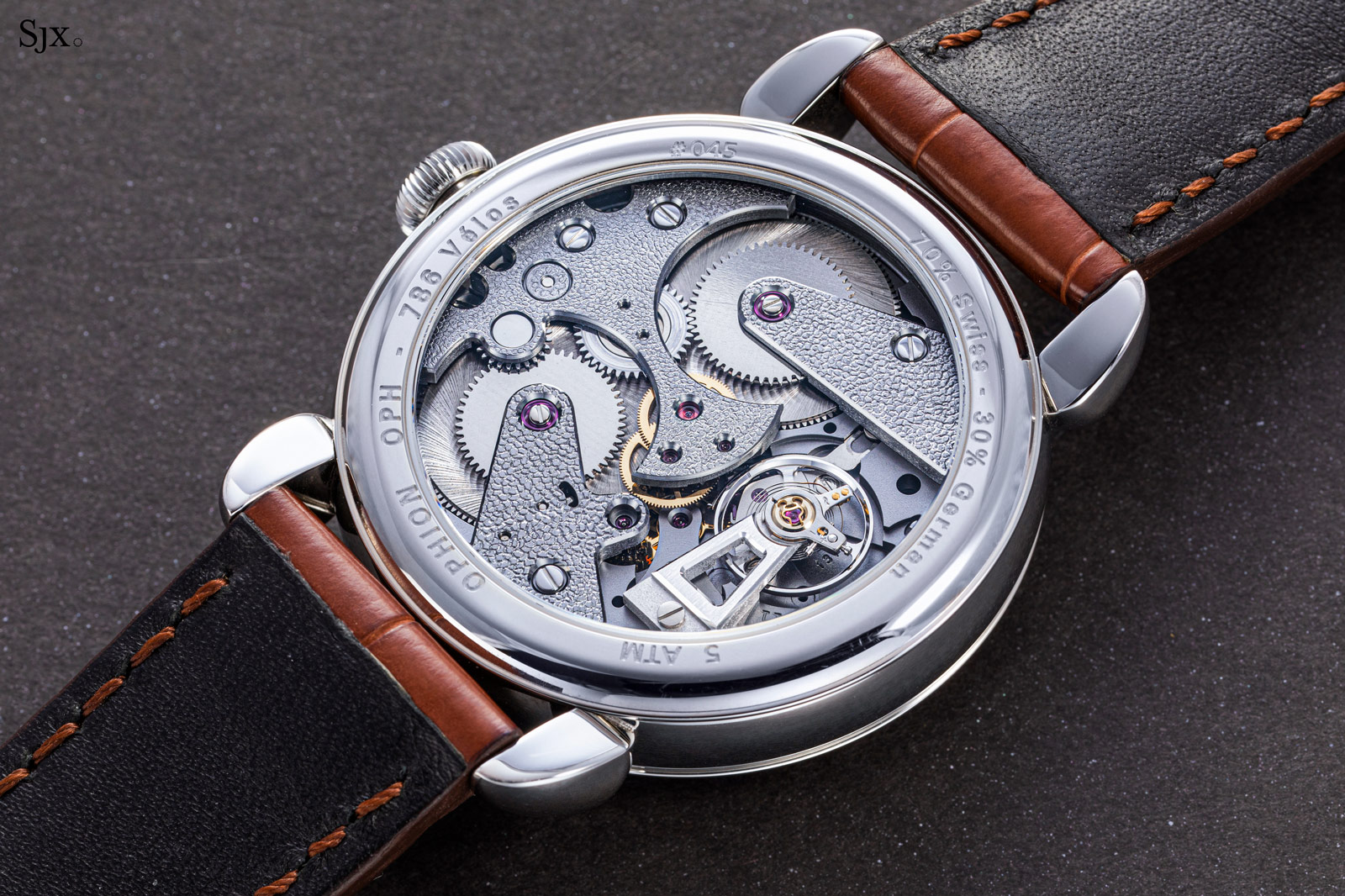 Ophion’s version of the movement removes most of the two-thirds plate to reveal more of the mechanics, which means a pair of exposed barrels and a sense of symmetry. The movement’s styling is modelled on 19th century pocket watch calibres, explaining the finger bridges for the barrels and balance. As with the dial, the movement is decorated by machine, resulting in an appealing, clean finish. Most of the effort in dressing up the movement has been strategically directed to a few elements that are the most apparent.

Amongst the most obvious is the grenaille, or “lead shot”, finish on the bridges is meant to recall a hammered surface. At arm’s length it resembles a heavily grained frosting, while up close it appears to have been achieved with embossing.

Another is the balance cock, which is straight grained on top and open worked, with bevels on both its inner and outer edges. Wide and flat, the bevels are milled with a CNC machine, just like the bevels on the bridges. Some components are finished farmer simply, including gears and screws that are tumble polished. The base plate, on the other hand, has an even, smooth blasting finish.

Even though some parts are plainly finished, they don’t detract from the overall appearance, because the right choices were made in which parts to decorate better. Although it’s apparent a good deal of thought was put into dressing up the movement, I would have preferred a more conventional finish that better suits the dial design. Frosting, for instance, can also be done by machine in an economical manner.

That said, the movement is attractive. That, combined with its five-day reserve, leaves the movement quite excellent for the price.

The only aspect of the back that is unappealing is the label on the rim of the case back that breaks down the geographical sources for the constituent parts of the watch. The Vélos is an instinctively appealing watch – it looks good and is priced right.

It’s clearly the product of smart design and able manufacturing – both applied in sufficient quantities. Its designers understand the details that matter, while the components suppliers managed to pull it off in a cost-efficient manner.

With their keen eye for detail already established, I hope Ophion works on something more distinctive, which would elevate the brand to another level. Strap: Calfskin with steel pin buckle; €80 to upgrade to an alligator strap