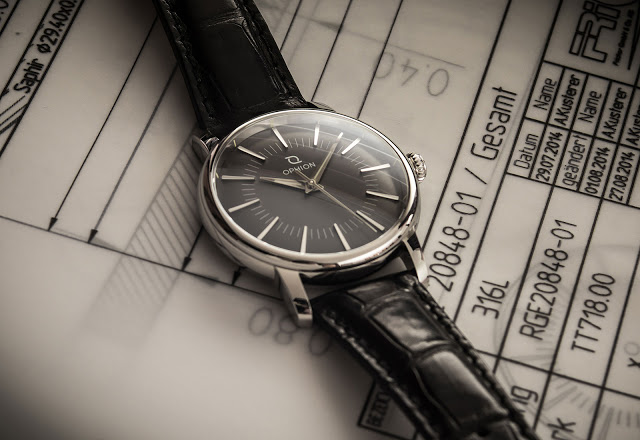 A watch start-up based in Spain, Ophion’s goal is to make affordable, classically styled timepieces, as illustrated by its first model, the OPH 960. Hand-wound with a retro 1960s design, the OPH 960 is assembled from components made by Swiss, German and Spanish suppliers.

Named after an ancient Greek god who was the father of Kronos, the god of time, Ophion’s first wristwatch is powered by a manual-wind movement with a five day power reserve made by Technotime, similar to the calibre used in several Speake-Marin watches, like the Mark 2 and Veshelda. Ophion opted for decorative finishing on the calibre, including polished bevels on the bridges which are straight grained, as well as blued steel screws. Inspired by gentlemen’s watches of 1960s, the OPH 960 has a domed dial and crystal, with gently curved hands that echo the plane of the dial. The indices are applied and raised, with a polished finish. The Super-Luminova is applied on the dial flange, rather than the indices, which means it is less obvious during the day. Like the dial, the case is made in Germany. It’s steel with a polished finished, and a diameter of 42mm. The case height is 8.85mm, giving it wide but slim proportions, a familiar formula for an elegant profile on the wrist. The OPH 960 is priced at €1305 before taxes (equivalent to about US$1450), and available direct from Ophion Watches. A Teju lizard skin strap is standard for the OPH 960, but for orders received before the watch is delivered in end July or August, the strap will be upgraded to alligator skin instead.