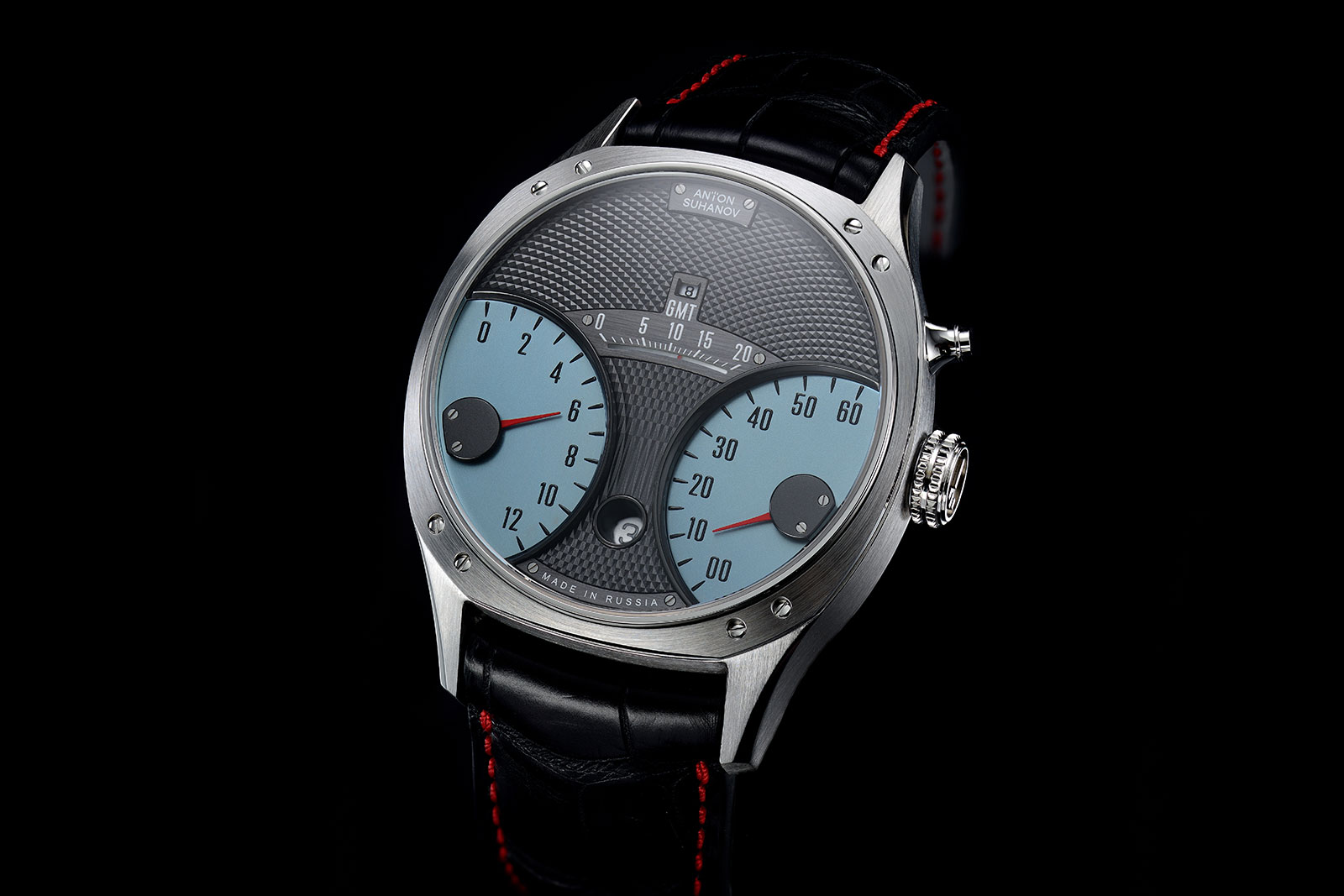 Anton Suhanov is best known for impressive desk clocks – the most recent of which features a triple-axis tourbillon within a metallic flower – but he has just unveiled his first timekeeper for the wrist. Inspired by automotive gauges, the Racer Jumping Hour GMT is an inventive take on the dual time zone wristwatch and boasts a double retrograde display along with a jumping hour.

His talents were already evident in his desk clocks, but Mr Suhanov now proves he can be equally imaginative with wristwatches. He once worked in Konstantin Chaykin’s workshop, which perhaps contributed to the novel design.

Automotive-inspired watches rarely capture the style of a dashboard without looking silly, but the Racer manages to do so successfully. The design instantly evokes the dashboard of a vintage automobile thanks to several clever design elements, including the tiny canopies over each retrograde display as well as the arched guilloche and tiny jump hour winds that gives the dial a sense of perspective. 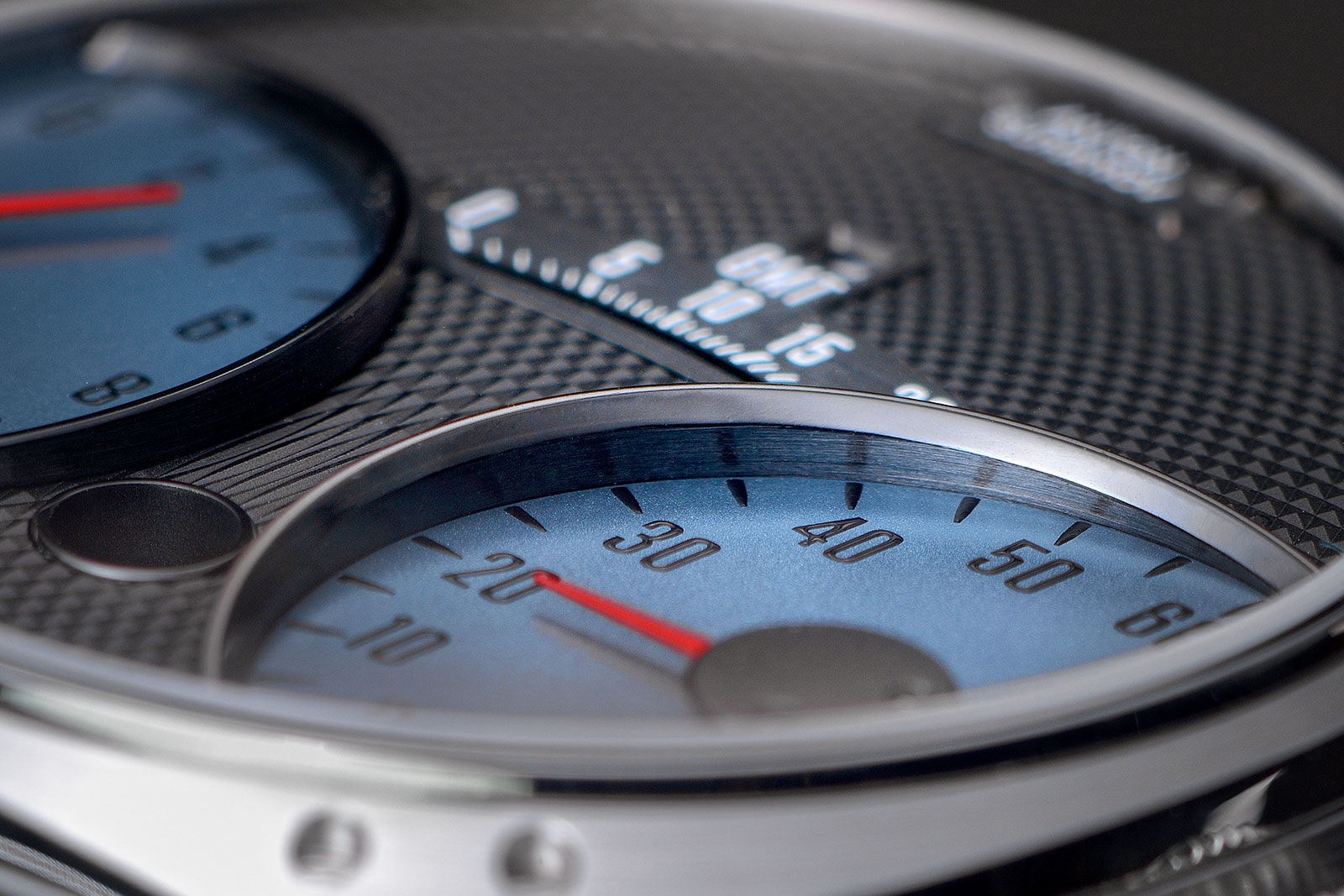 The Racer is more complex than it looks – the time-display module has as many parts as an entire chronograph movement – although the base movement is a tried and true, but no-frills ETA 2824.

Still, with a price of a bit over US$17,000, the Racer offers good value given the original design and mechanical complexity, most of which is accomplished in-house by Mr Suhanov.

The slightly retro dial indicates the hours and minutes on retrograde scales at eight and four o’clock respectively, while the seconds lie within a narrow, horizontal window with a 20-second scale. Though the seconds indicator appears to be a retrograde – it traverses the 20-seconds scale three times a minute – it is actually a three-armed seconds hand under the dial that creates the illusion of a retrograde.

Just above the seconds is the second time zone display, which takes the form of a jumping hours on a 24-hour scale. And at six o’clock within a circular aperture is the date. 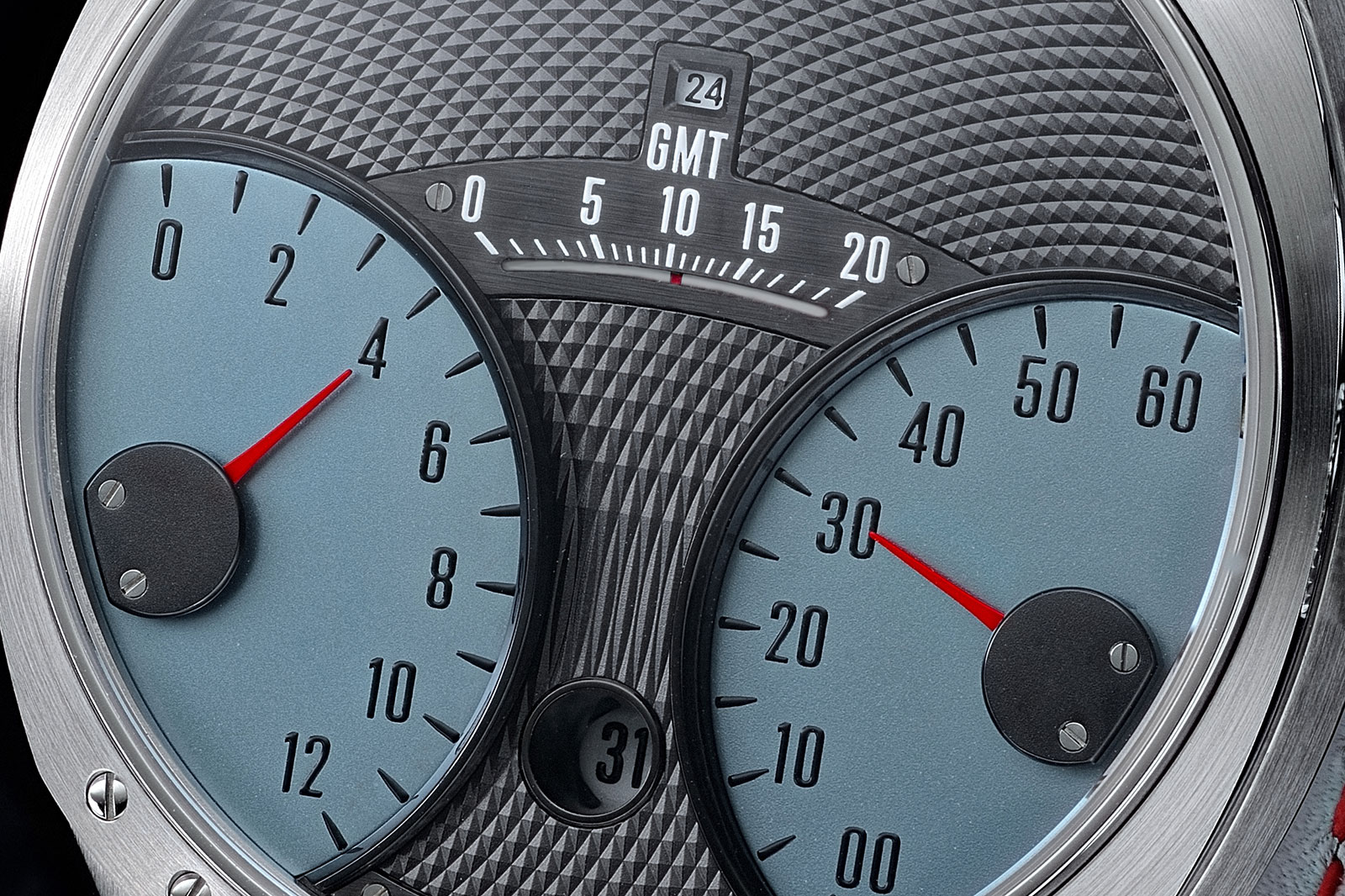 Beyond the original time display, the Racer has a notably high level of detail on both the case and dial.

Comprised of 27 parts in total, the dial has a central section in ruthenium-plated brass finished with an arching hobnail guilloche that varies in scale from top to bottom, while each of the twin sub-dials for the retrograde displays are anodised titanium. 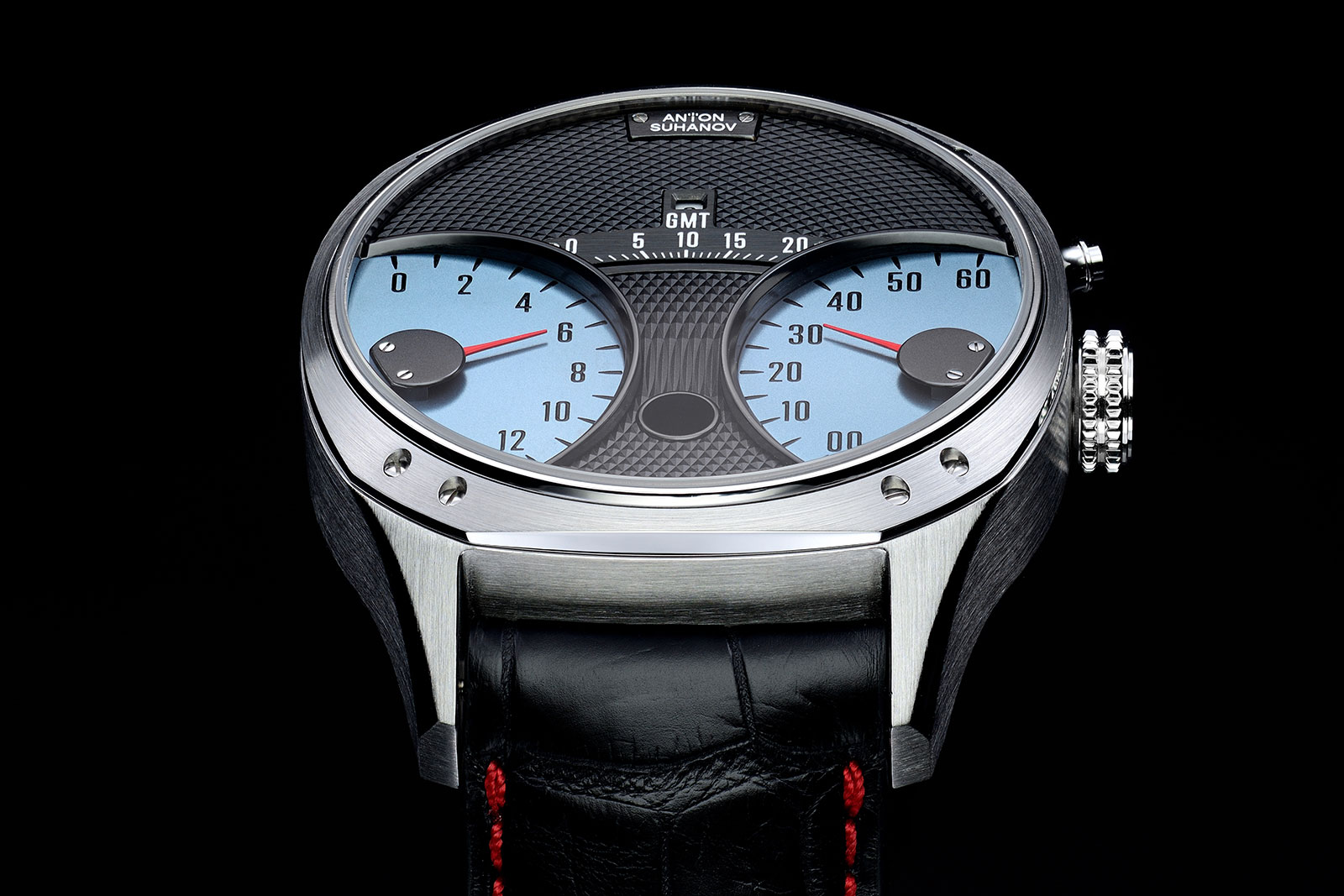 The steel case is a moderate 39 mm in diameter and 12.5 mm high. Its unusual shape is a Reuleaux polygon, or a rounded square. According to Mr Suhanov, “This shape hints at the aerodynamics [and] streamlined lines found in high-speed cars.” Similarly, the the exposed screws on the bezel and dial are similarly inspired by automobile construction. 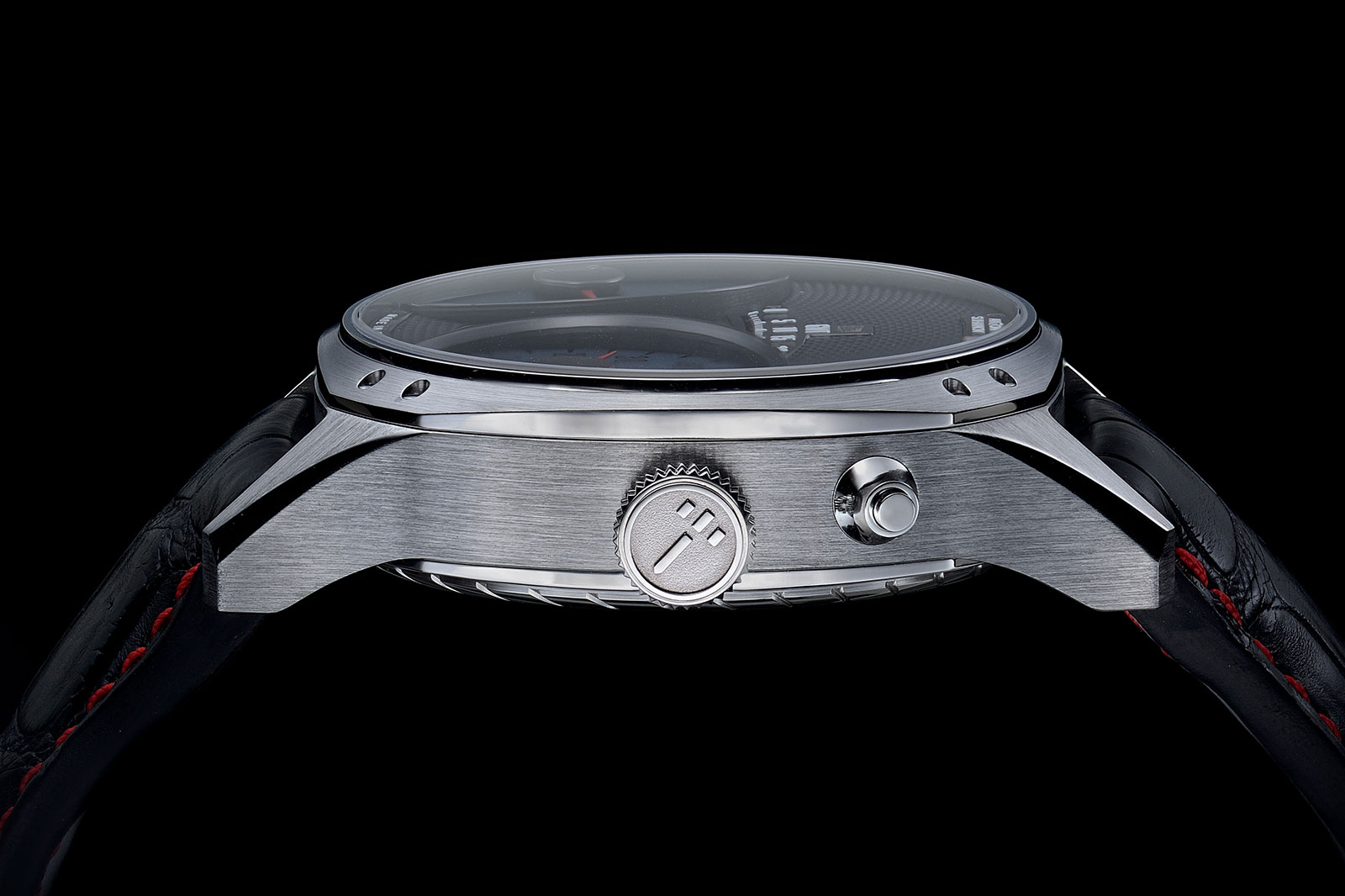 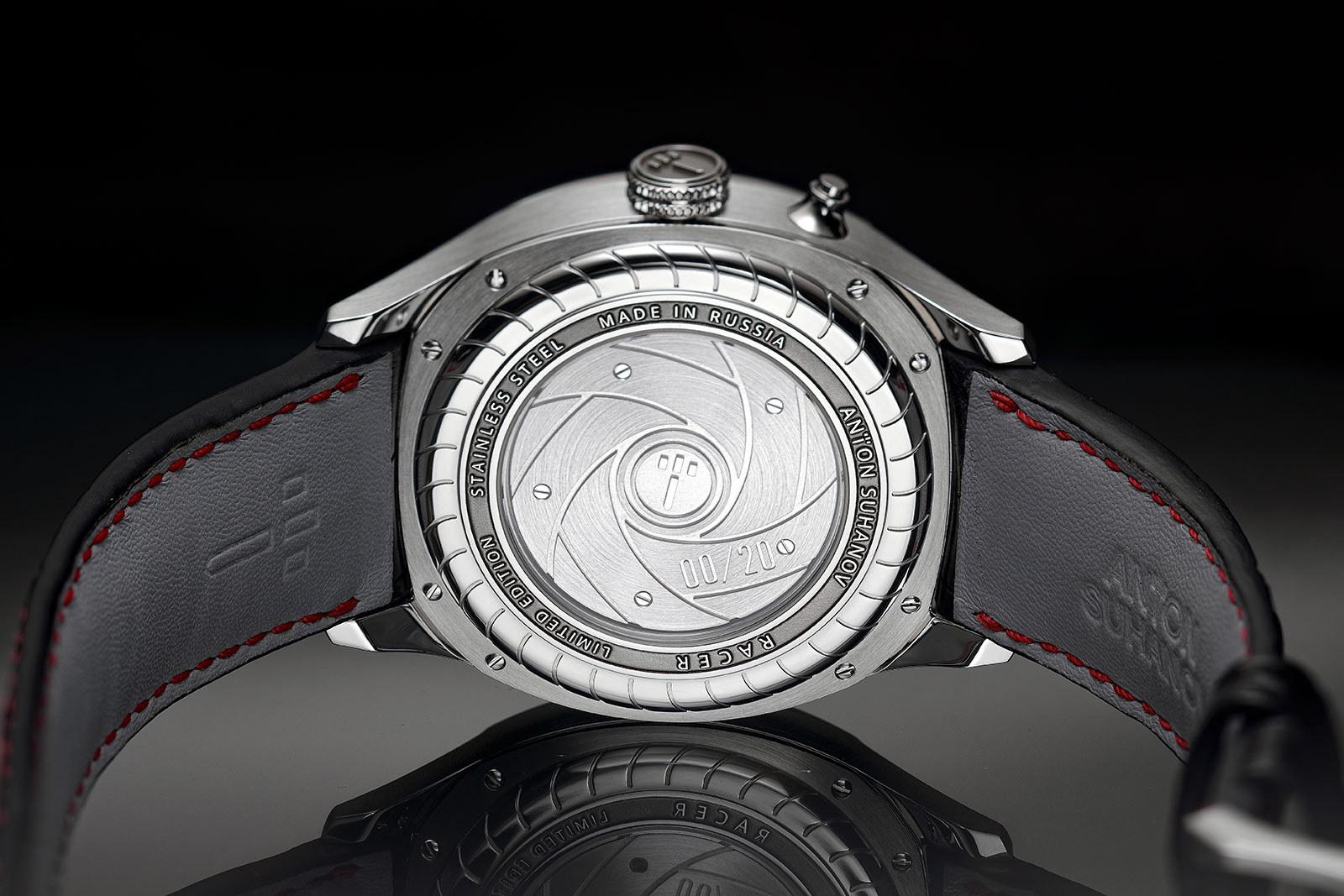 Under the solid back is the Su100.20 movement, which is made up of an ETA 2824-2 combined with Mr Suhanov’s own module. The module is surprisingly complex, being made up of 172 parts, which is similar the number of components required for an entire chronograph movement.

Although the module is unseen, it is decorated by hand. The bridges, for instance are frosted and bevelled, while the steel levers are straight grained with hammered edges. 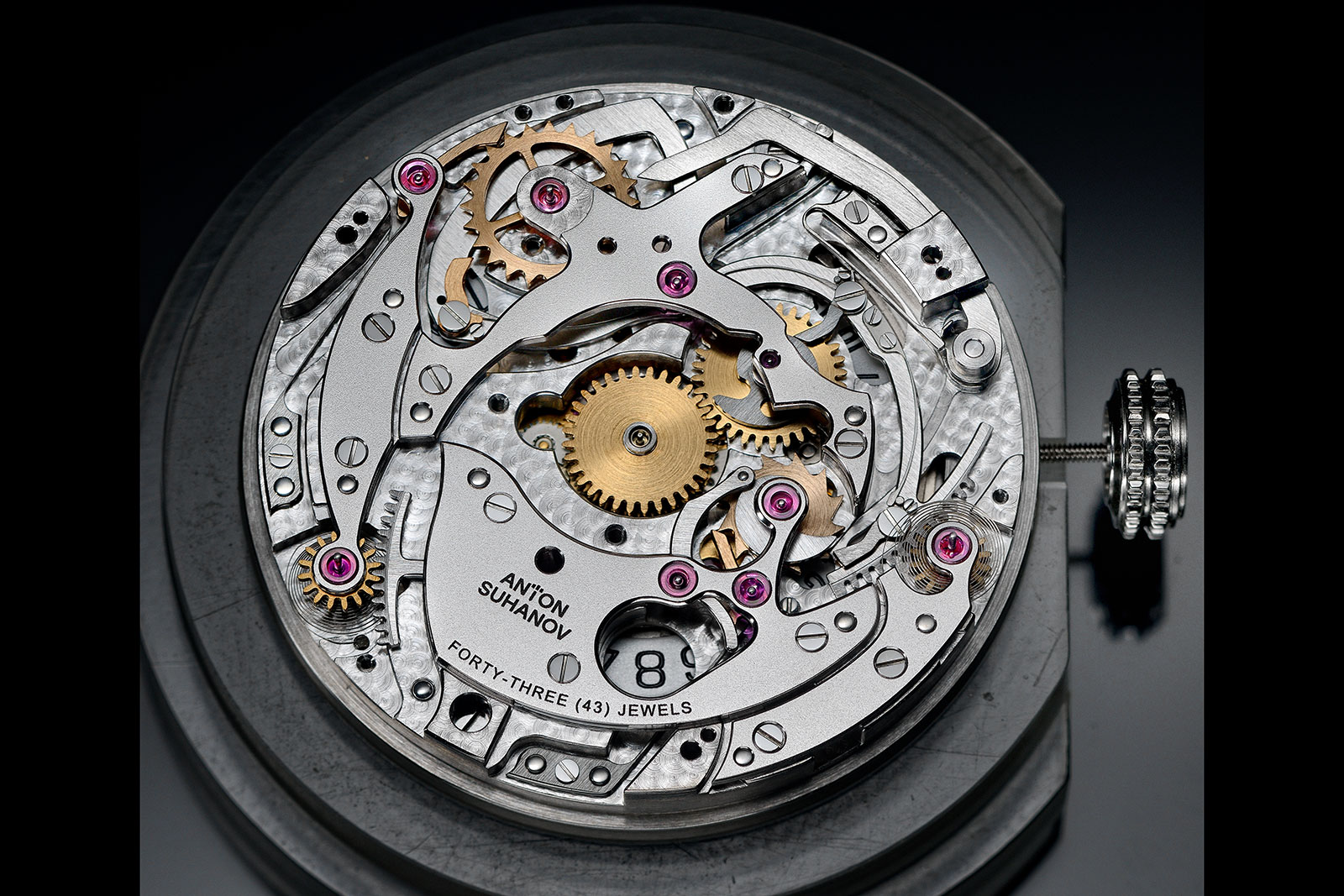