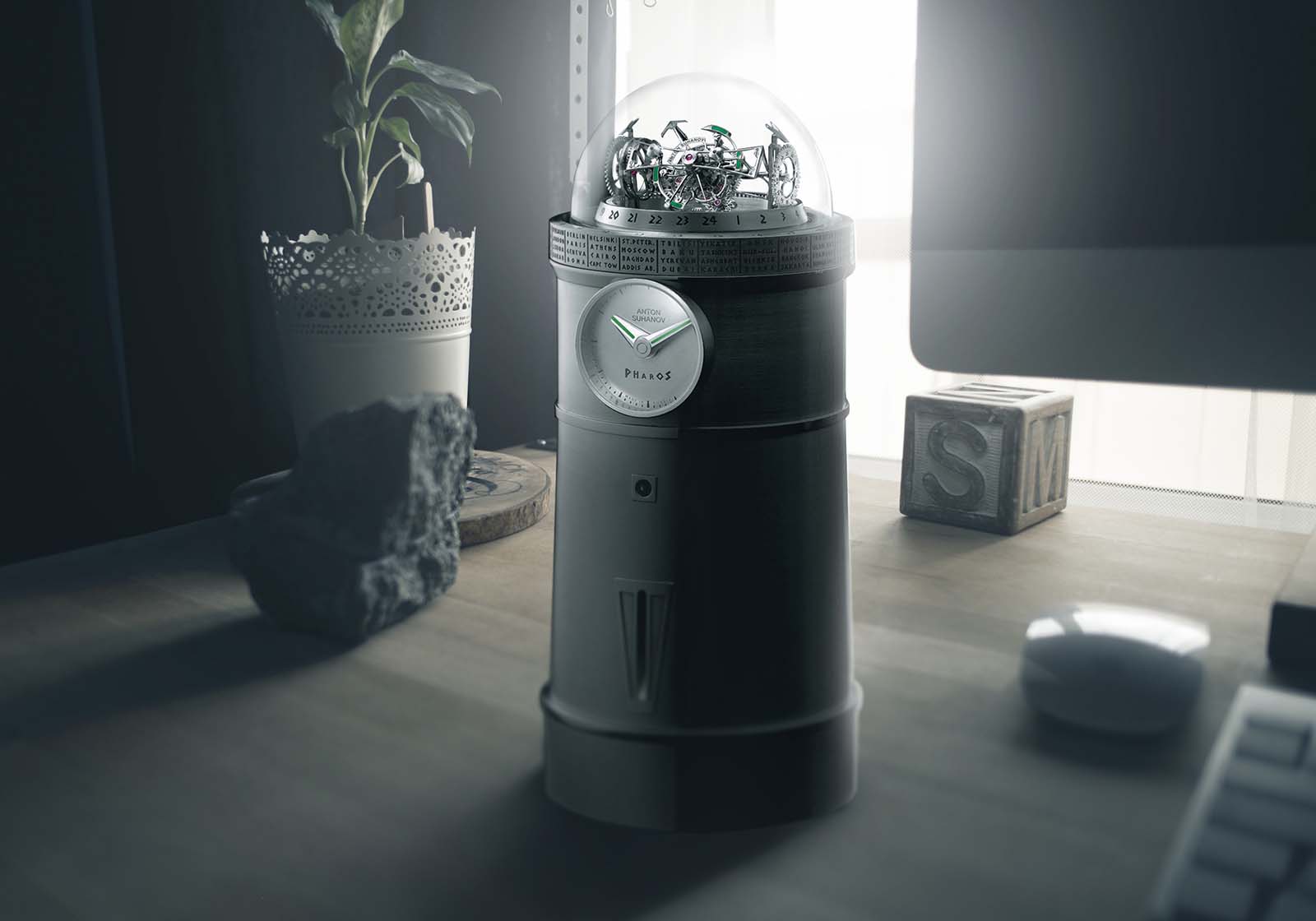 Independent Russian watchmaker Anton Suhanov is making his debut, not with a wristwatch, but a notably exotic table clock. Inspired by the Lighthouse of Alexandria, the Pharos is column-shaped, world-time clock featuring a triple-axis tourbillon – that is notably well priced for an exotic, high-end timepiece.

Though Suhanov only struck out on his own a year ago, he is almost an industry veteran. He spent over a decade working for fellow Russian watchmaker Konstantin Chaykin of Joker wristwatch fame, first as a constructor developing movements and then as manufacturing director. The Pharos clock is actually an evolution of a nephrite-clad table clock that Suhanov finished in 2016. Also equipped with a triple-axis tourbillon, the clock won for Suhanov the F.P. Journe Young Talent Competition that year. 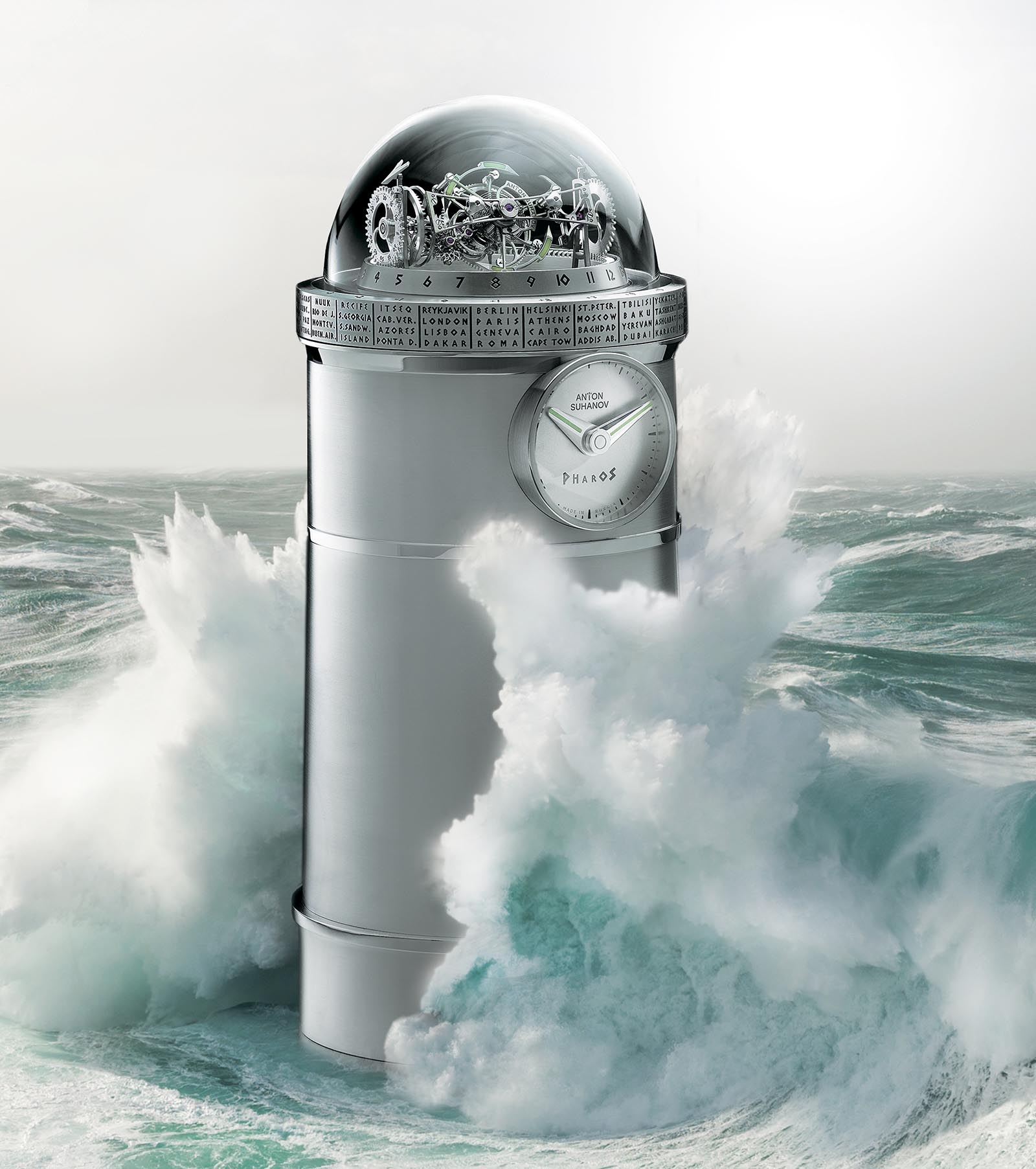 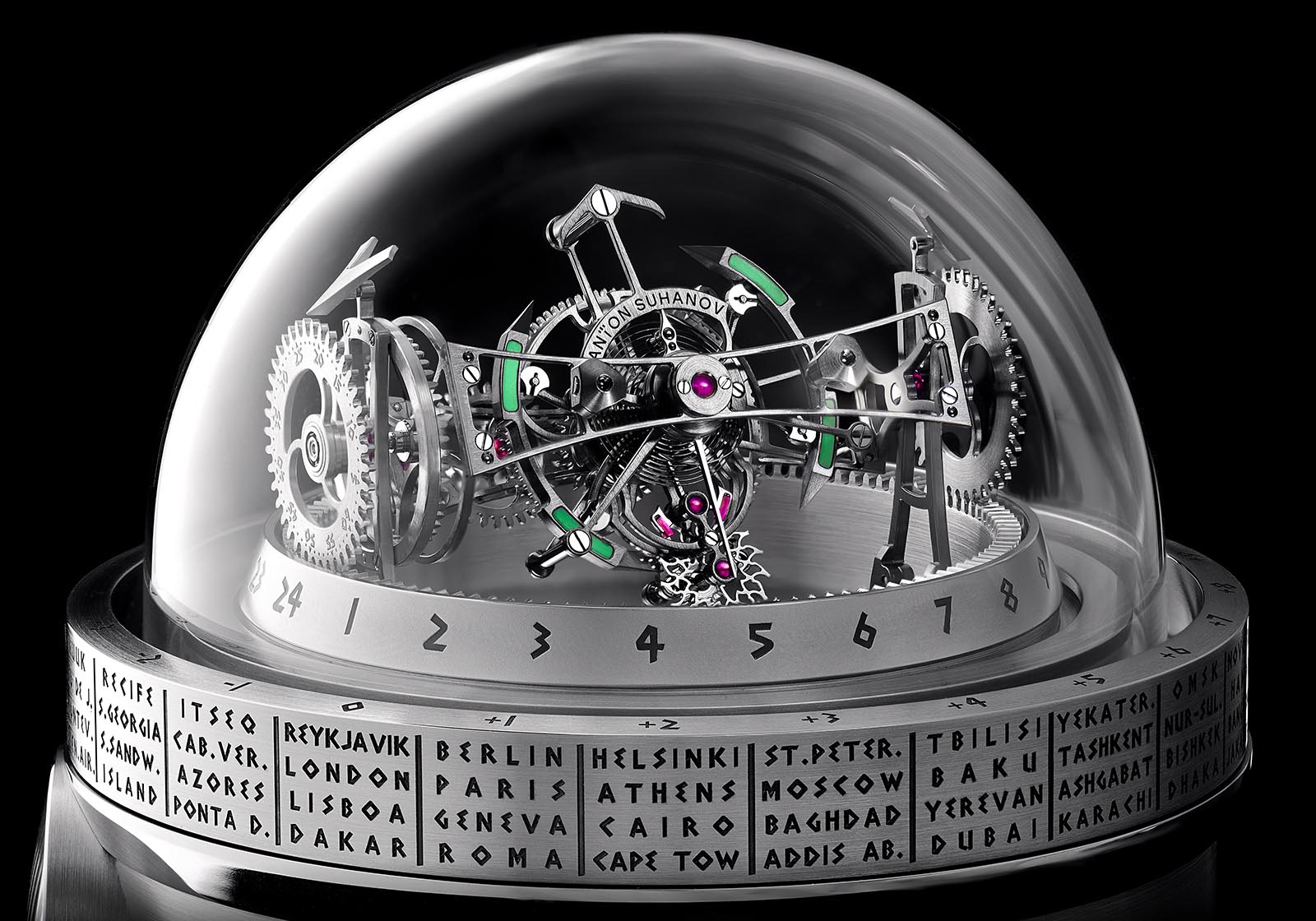 Once upon a time, a millennia ago…

One of the Seven Wonders of the Ancient World, the Lighthouse of Alexandria stood on Pharos, a small island off the city of Alexandria. Believed to have been about 100 m tall – the equivalent of a 20-story building – the lighthouse was constructed during the second century BC, and suffered damage during various earthquakes, which was the cause of its final demise in the 14th century.

The Pharos clock is a nod to the ancient wonder. It has a cylindrical steel body that stands 19 cm high, with prominent sapphire dome at the top that’s 8.6 cm in diameter. While Suhanov’s first clock only revealed the tourbillon via small porthole, the sapphire dome on the Pharos fully reveals the triple-axis tourbillon in all its glory. 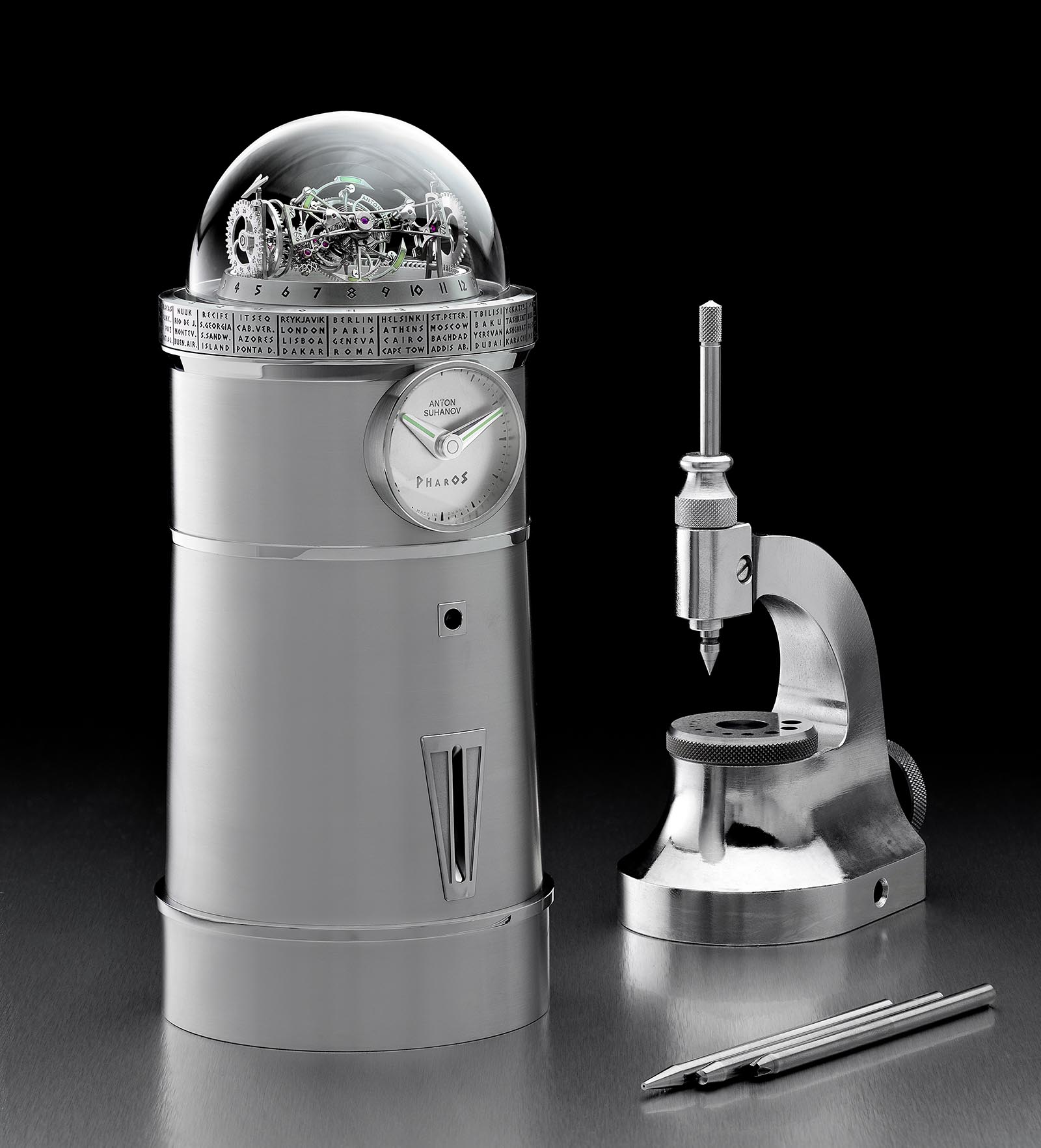 The tourbillon is made up of three, fast-rotating cages housing an unusual, H-shaped balance wheel as well as an intriguing, open-worked escape wheel shaped like a flower.

And standing in for the furnace at the top of the lighthouse of antiquity are the large luminous inserts on the rim of the balance. Beating at a brisk 2.5 Hz, the glow-in-the-dark balance within the complex tourbillon creates quite the visual spectacle. 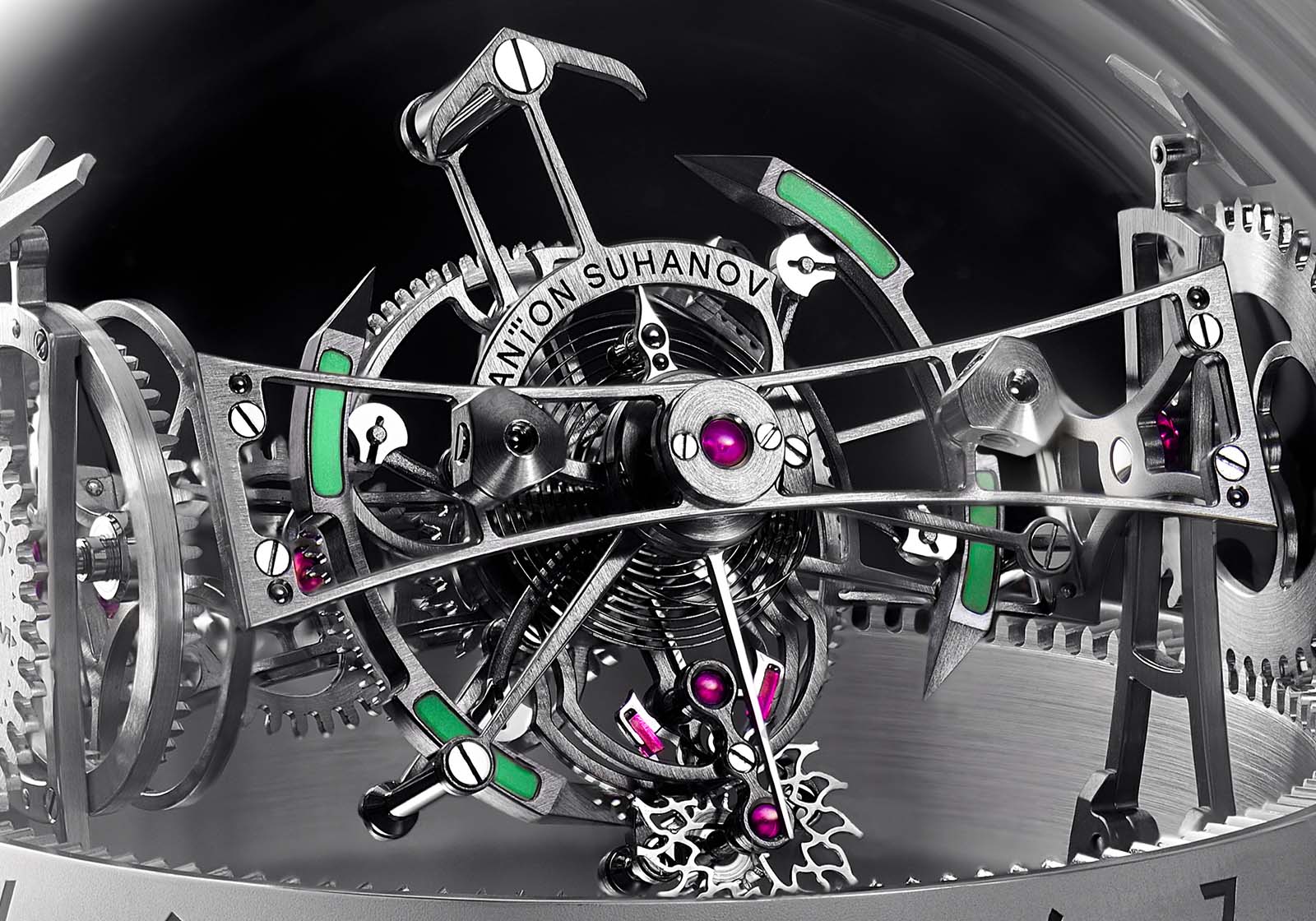 The time around the world

Slightly reminiscent of the Vianney Halter Deep Space Tourbillon, the triple-axis tourbillon in the Pharos uses the vertically-positioned outer gear of the third cage to function as the seconds scale, with its rim graduated for 60 seconds. As the third cage completes one rotation every three minutes, the outer gear makes three complete rotations in that time, measuring 180 seconds.

The third carriage sits on a fixed gear ring that is partially hidden behind a 24-hour ring. Used in conjunction with the cities disc to display world time, the 24-hour ring rotates clockwise, making one revolution a day. In contrast, the third carriage moves in the opposite direction. 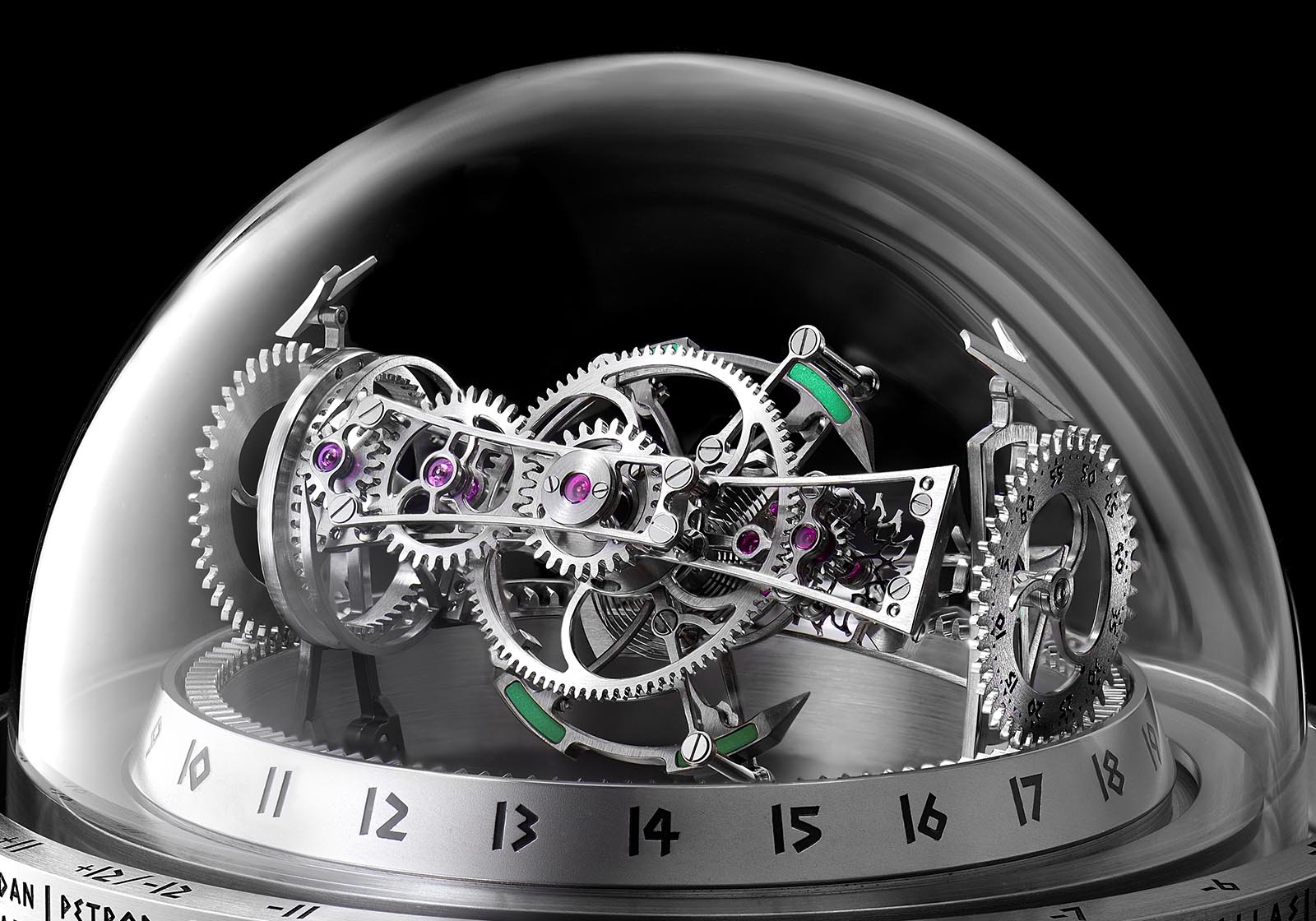 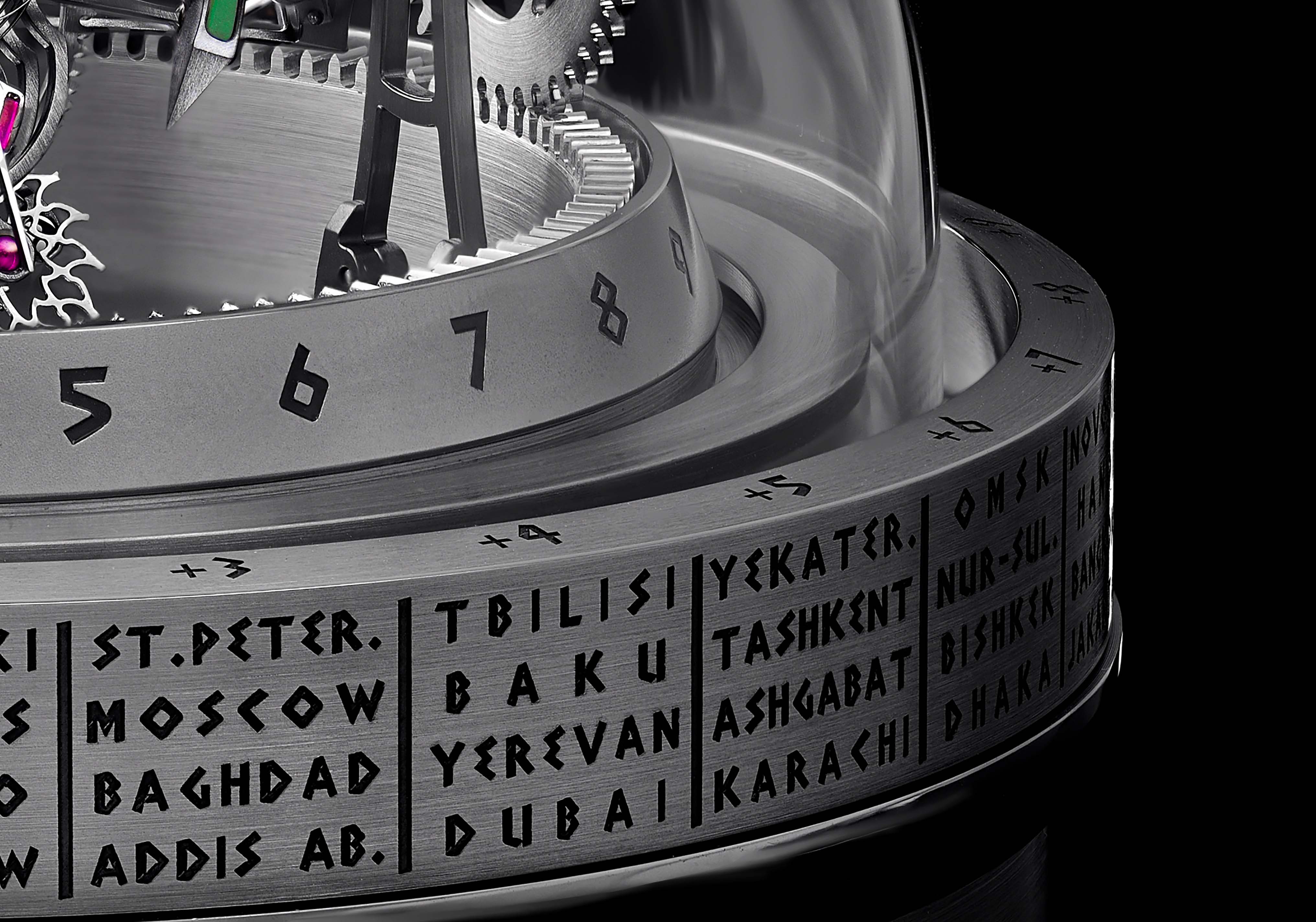 The cities ring along with the respective time zone offsets

With all the action on the top of the clock, the time display is conventional, with two luminous hands on a round dial.

More unusual is the power reserve display just below. It takes the form of a vertical slit in the clock; as the mainspring winds down, a steel wing emerges from the slit, indicating the clock should be rewound.

Time is set with a key inserted into the aperture just below dial; another aperture on the other side of the clock is for winding, which also requires a key.

The Pharos is limited to 24 examples, and priced at €32,000, which is equivalent to US$35,000. That puts it at the affordable end of the spectrum for high-end clocks, enough that it might be considered a value proposition. 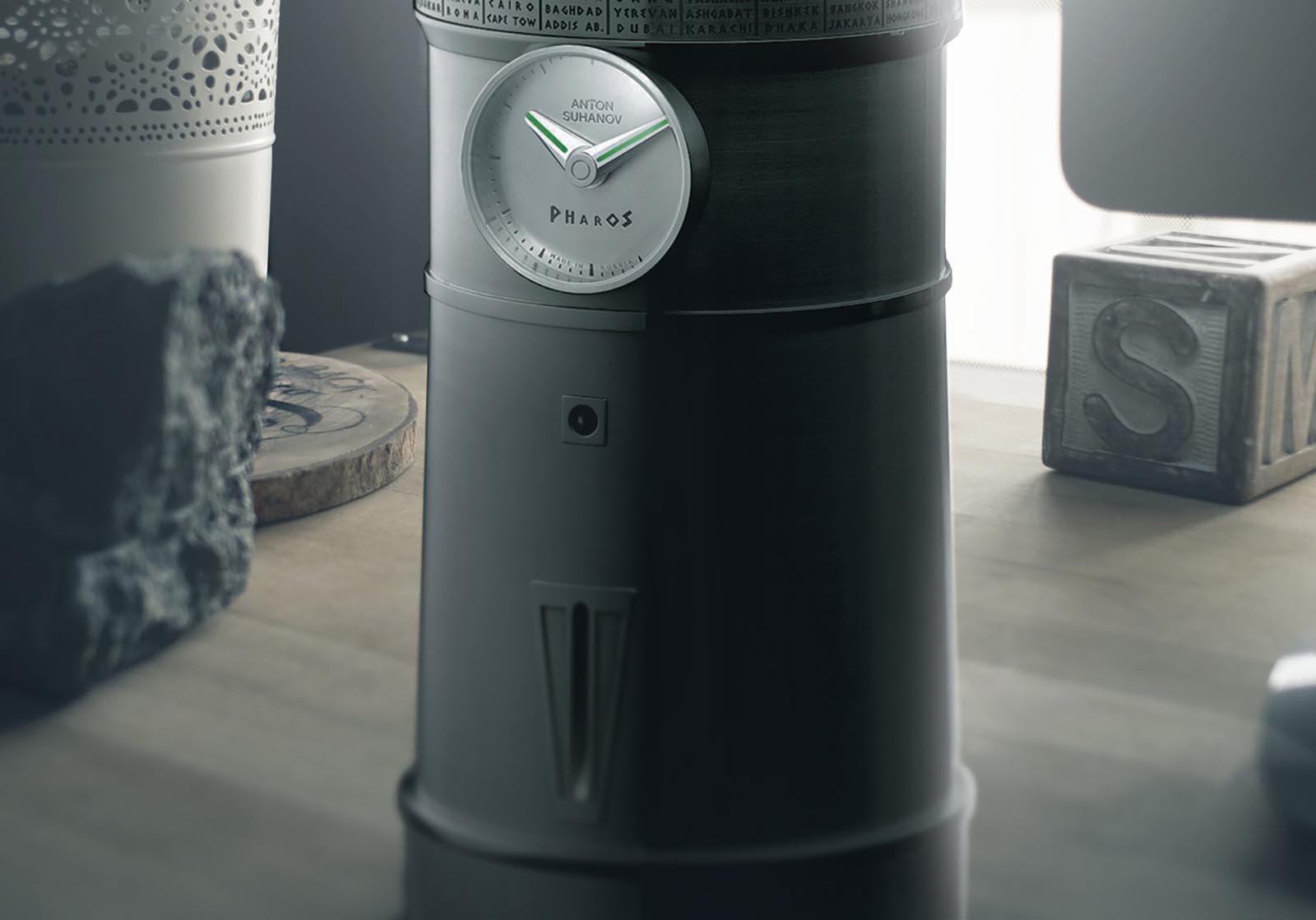