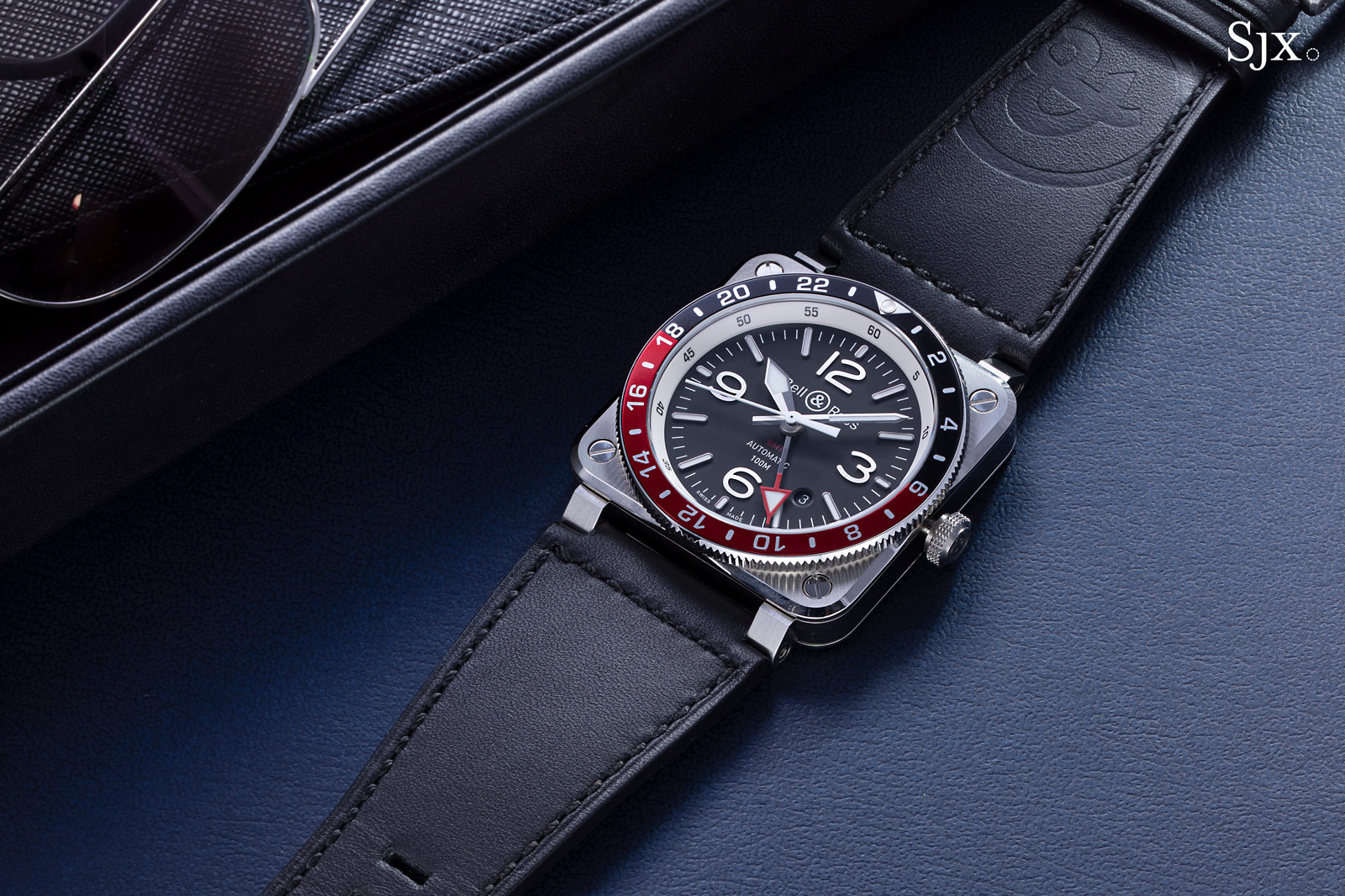 Being best known for its aviation-instrument watches, it is logical that Bell & Ross also does well with watches that keep track of a second, and now a third, time zone. The brand’s catalogue includes a variety of travel watches, with the latest being the BR 03-93 GMT.

It’s an improved version of the brand’s longstanding dual time zone in a square case, now enhanced with a bi-directional, 24-hour bezel in “Coke” colours that allow it to display the time in up to three places. 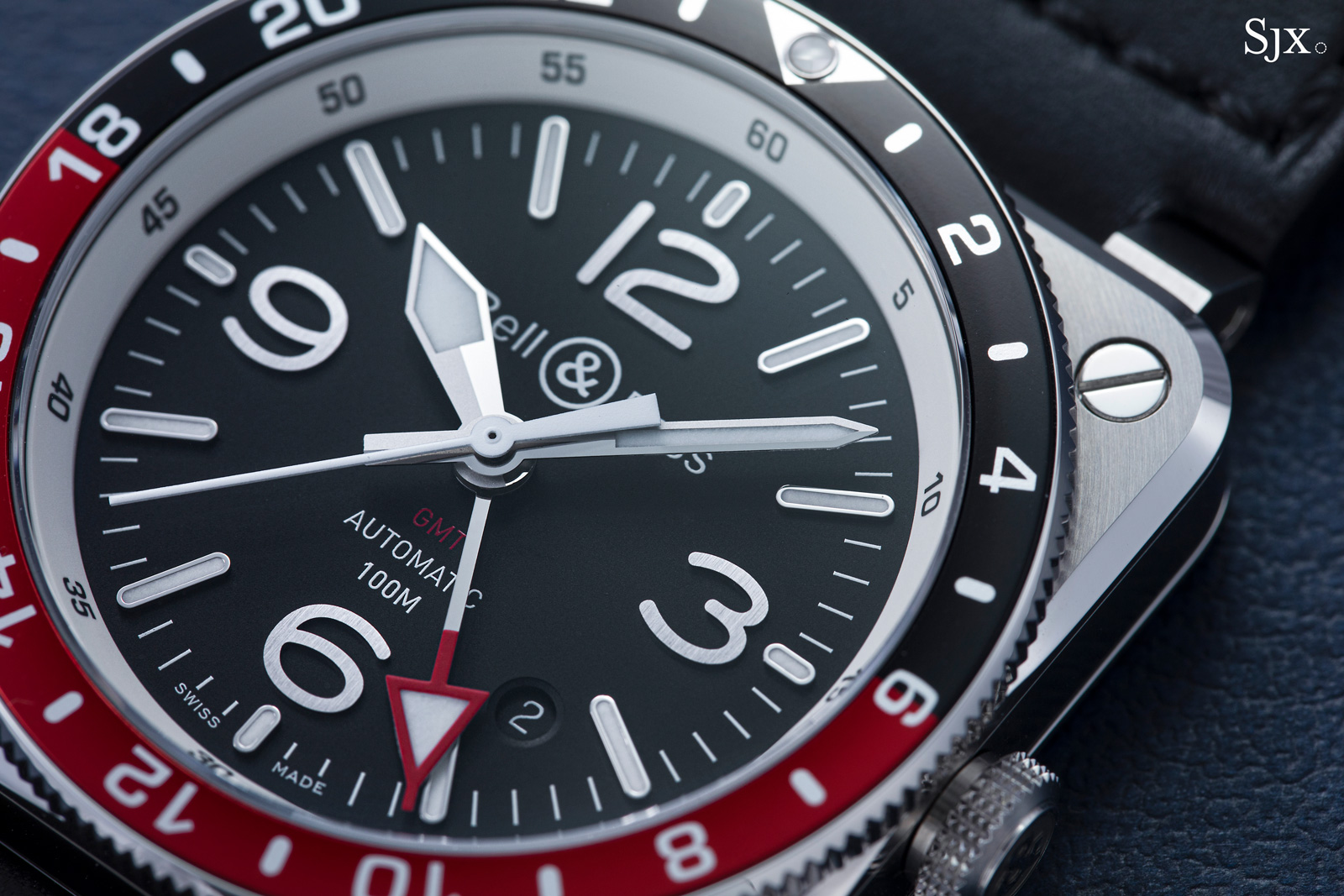 Bell & Ross (B&R) launched the original BR 03-93 GMT in 2016, which was the brand’s first wristwatch to combine the signature square case with a second time zone. The first-generation model has a fixed bezel, limiting its functionality to just two time zones. Subsequently, B&R introduced a model with a rotating, 24-hour bezel – allowing it to track a third time zone – but in a more conventional round case. While the square BR 03 case and rotating second time zone bezel might seem like an obvious combination, it has never existed, until now.

The new BR 03-93 GMT is the first to install a bi-directional, 24-hour bezel on the brand’s best-known case design. Given B&R’s roots in “tool” watches for pilots and other professionals, I’m surprised that it took as long as it did for B&R to combine the two. While there exist me-too GMT watches, the BR 03-93 is its own watch. The large square case is emblematic of B&R, which also offers watches that are more affordable. 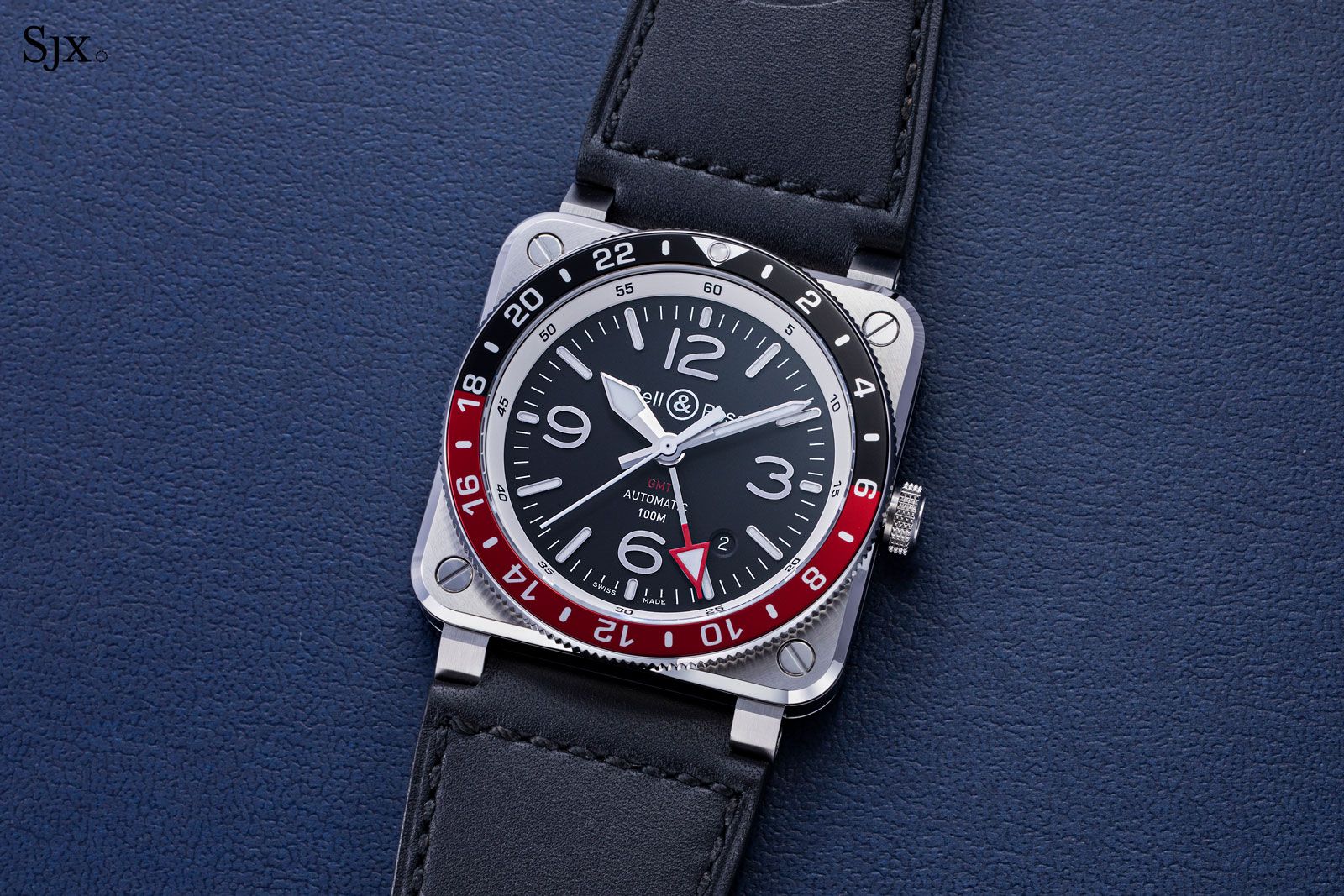 The bezel might seem a minor tweak, but having examined the BR 03-93 GMT in the metal, I can attest to its striking nature. In fact, I much prefer the “Coke” colours to the all-steel bezel found on the first-generation model, which now comes across as plain in comparison.

A sharp execution in red and black that immediately pops on the wrist, the bezel complements the colours of dial. The red echoes the GMT hand and lettering on the dial, while the black matches the matte dial surface.

While the dial has an eminently functional layout, it is livened up by applied numerals and indices, as well as the sloping flange with five-minute markings. Combined with the red-and-black bezel, the new BR 03-93 GMT has substantially more visual depth than its predecessor. 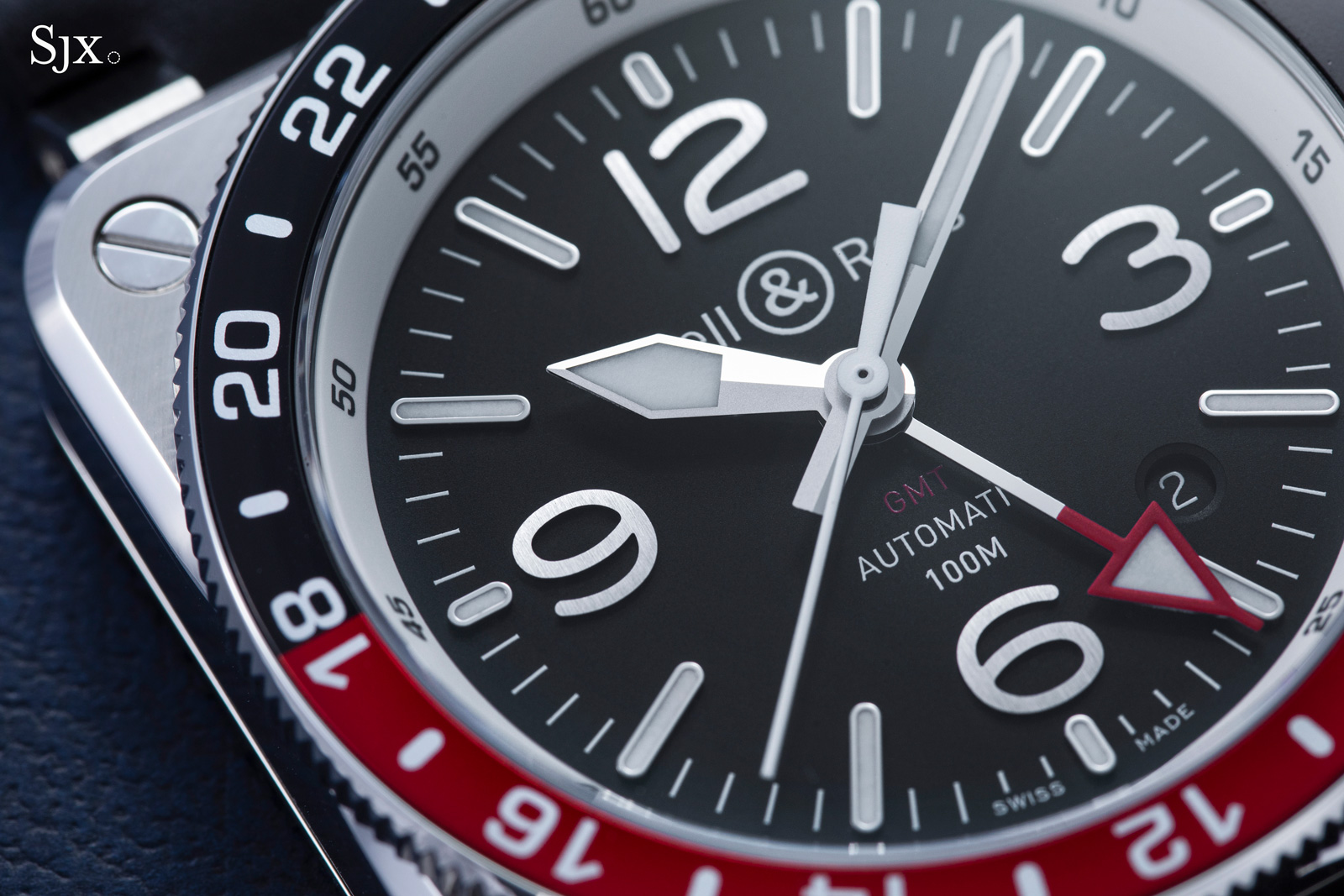 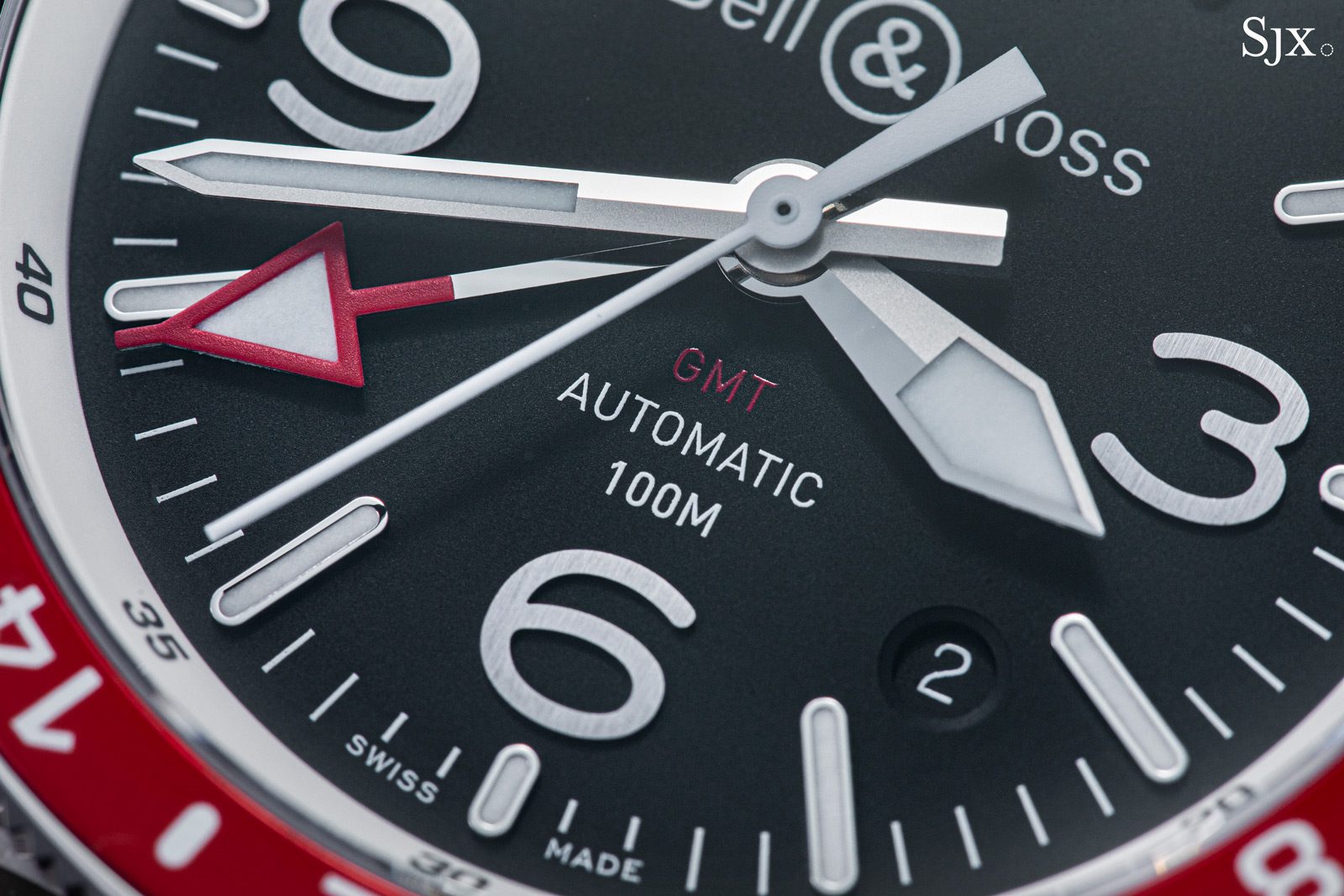 The case, however, remains identical to the first-generation model, which is a good thing. Its dimensions are a reasonable 42 mm, a size that wears well. And it’s worth pointing out that the BR 03 is not as thick as it looks, which gives it the feel of a flat instrument panel on the wrist, which is probably the point of the design.

As I mentioned in my recent review of the BR 03-92 Diver Military, the BR 03 is the perfect size for B&R’s square case. It’s significantly more wearable than the 46 mm BR 01, but unlike the smaller, 39 mm BR S for ladies, the BR 03 still has sufficient wrist presence, being sizeable enough to stay true to the fighter-jet instrument panels that inspired the shape. The BR 03-93 GMT possesses all the hallmarks of the typical B&R aviator’s watch. I like the wide, sword hands that gives the timepiece added character. And while I’m not usually a fan of a date window, the black date disc blends into the rest of the dial, allowing it to sit unobtrusively until you need it. Legible thanks to the white-on-black dial, the new model has been maximised as a travel watch since it can tell the time in three different time zones, instead of just two.

The first two time zones are indicated by the two hour hands, while the rotating 24-hour bezel tracks a third. Turning the bezel in either direction adds or subtracts hours from the home time indication, allowing the bezel to show the time in a third locale.

That said, using the bezel for an additional time zone is typically a backup feature, because reading the third time zone is not as intuitive as the two displayed via the hands. The bezel is steel with an aluminium insert

Up close, the dial stands up to scrutiny. The text is crisply printed, while the applied numerals have a satin-brushing that fits the utilitarian nature of the watch. Unlike the first-generation model, the bezel has a luminous pip, though the markings on the bezel are devoid of luminescence But as is usually the case with the B&R’s timepieces – no pun intended – the square case is the defining element of the watch. The form is instantly recognisable as a B&R.

Beyond the shape, the case stands out for its excellent quality. It’s solidly constructed in sandwich format, with the four screws on the front actually nuts that hold the screws visible on the case back. The screws extend the height of the case, keeping everything together. 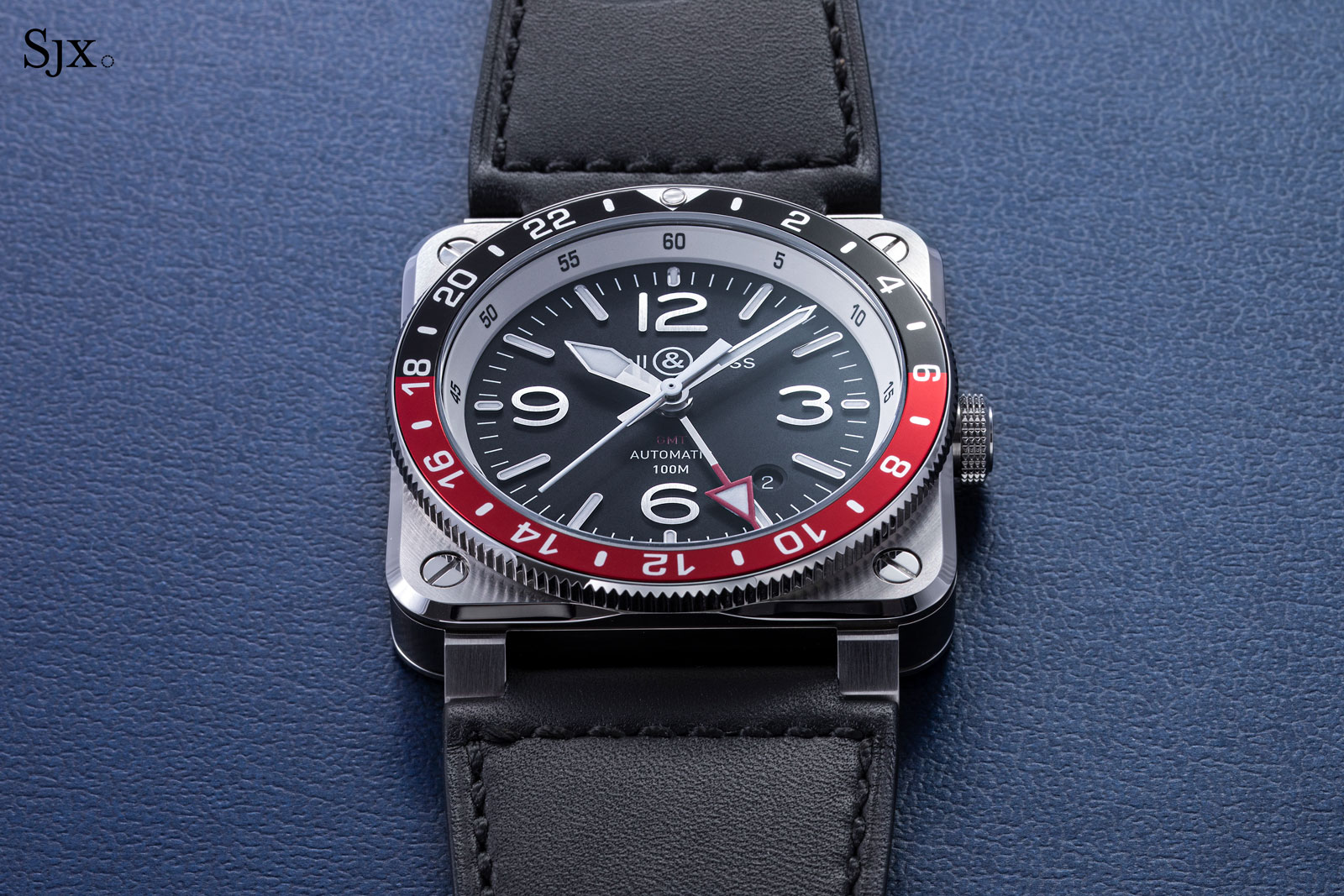 While the shape of the case is simple, the finishing has good detail. The case is largely brushed, with polished bevels along all four edges that bring a bit of refinement to the “tool” watch look. A detail that brings a bit more variety to the surface finishes is the finely-knurled crown that alludes to the bezel. 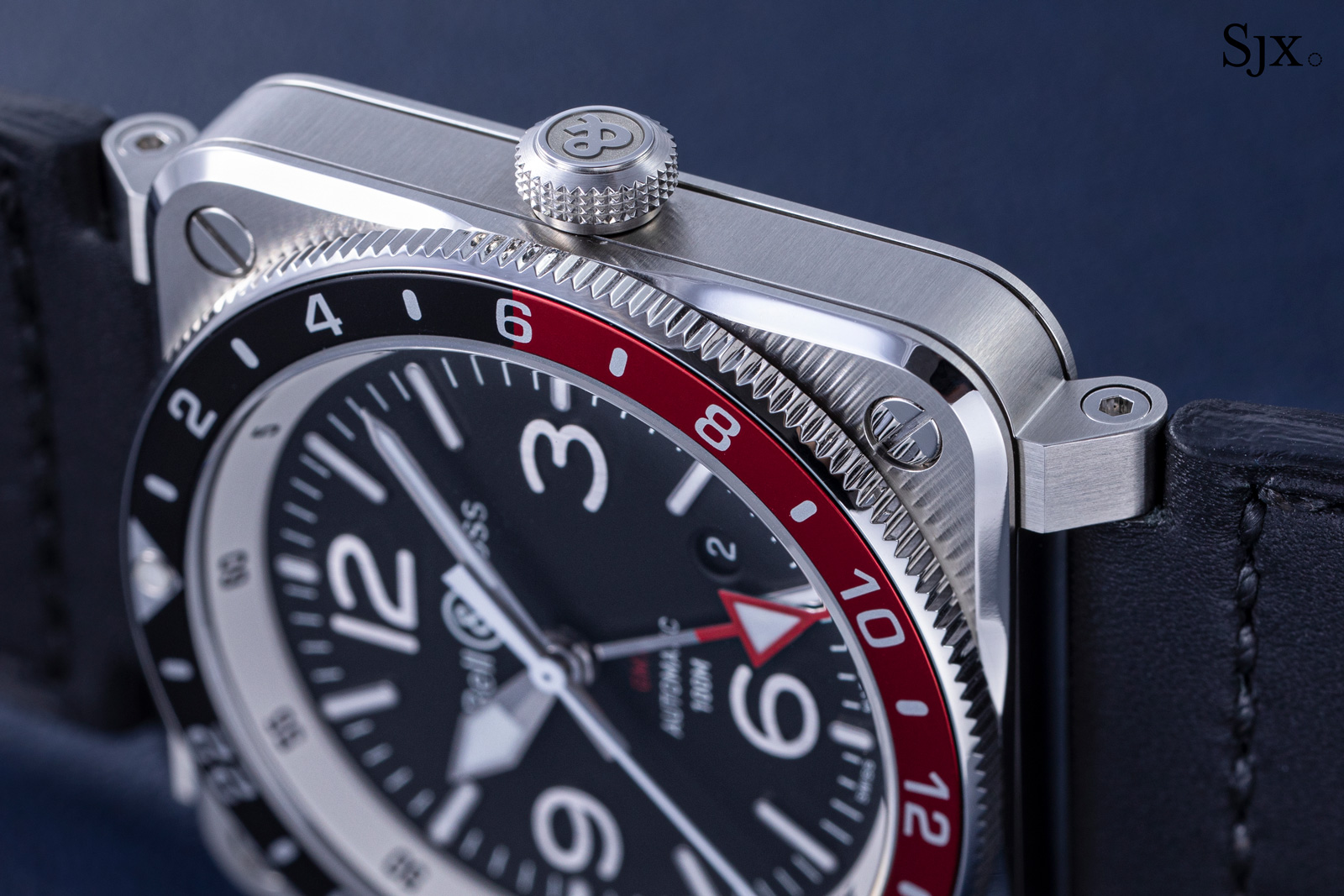 If the watch has a weakness, it’s the BR-CAL.303 inside. It’s a robust movement with 42 hours of power reserve that’s actually an ETA 2893-2. The movement is an ETA 2892-2 modified to give it an additional, independent hour hand for home time on a 24-hour scale.

The configuration of the movement makes setting the two time zones slightly tedious, which is a knock on the functionality of the watch. That said, this set up is the norm for GMT watches in this price range, from the likes of Sinn or Longines for example, most of which rely on the same ETA movement or other similarly-modified calibres. As a result, it doesn’t put the BR 03-93 GMT at a disadvantage against majority of the competition. The new BR 03-93 GMT is a winner. An improvement over its predecessor in almost every way, it is undoubtedly the best dual time zone watch B&R has put out.

However, the BR 03-93 GMT does compete in a crowded segment. Fortunately, most of its competitors use the same ETA movement. One of the few exceptions in terms of movements is the Tudor Black Bay GMT that has an in-house movement with a comprehensive GMT function. The Tudor is strong value, but it sticks to the brand’s tried-and-test dive watch design.

As a result, the BR 03-93 GMT stands out by virtue of its case and styling. The square case is appealing and finished well. If you’re on the hunt for a GMT watch that takes an unconventional form, the BR 03-93 GMT is worth a look.