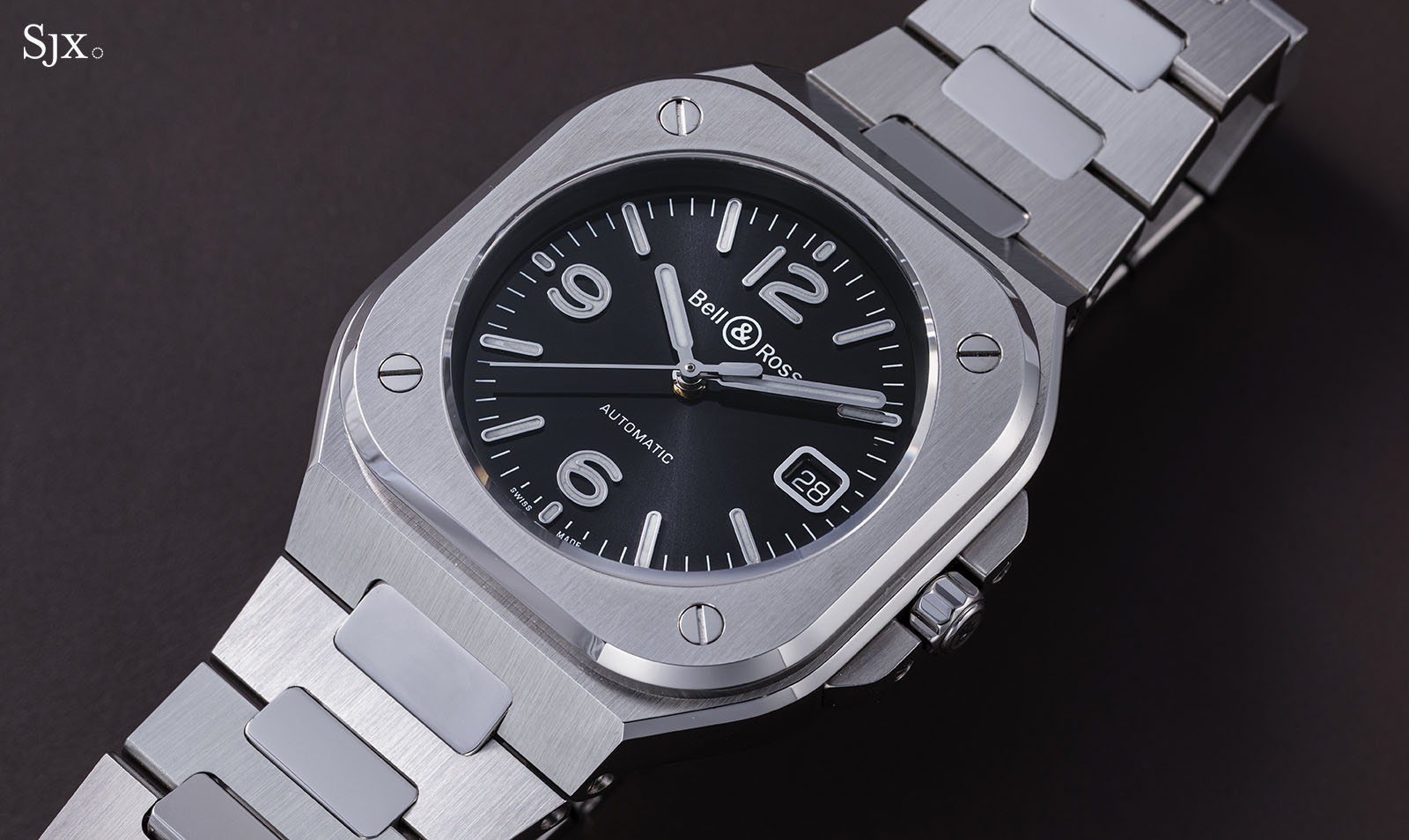 Luxury sports watches in steel with distinctive case shapes and integrated bracelets have been an unstoppable trend of late. Though the segment was born in the 1970s with the Audemars Piguet Royal Oak and then Patek Philippe Nautilus, it’s arguably at the high-water mark now.

Several brands have joined the party with their own luxury sport watches, each designed with a different impetus, but often met with a certain degree of controversy. Recent examples include the Vacheron Constantin Overseas, Piaget Polo S, and Girard-Perregaux Laureato. And now, it’s the turn of Bell & Ross (B&R) with the BR 05.

Unsurprisingly, the BR 05 is a riff on the most iconic Bell & Ross design – the circle-within-a-square case. The BR 05 enters a crowded segment in both an affordable manner; it’s kitted out with a well-constructed case and customised movement for under US$5000. 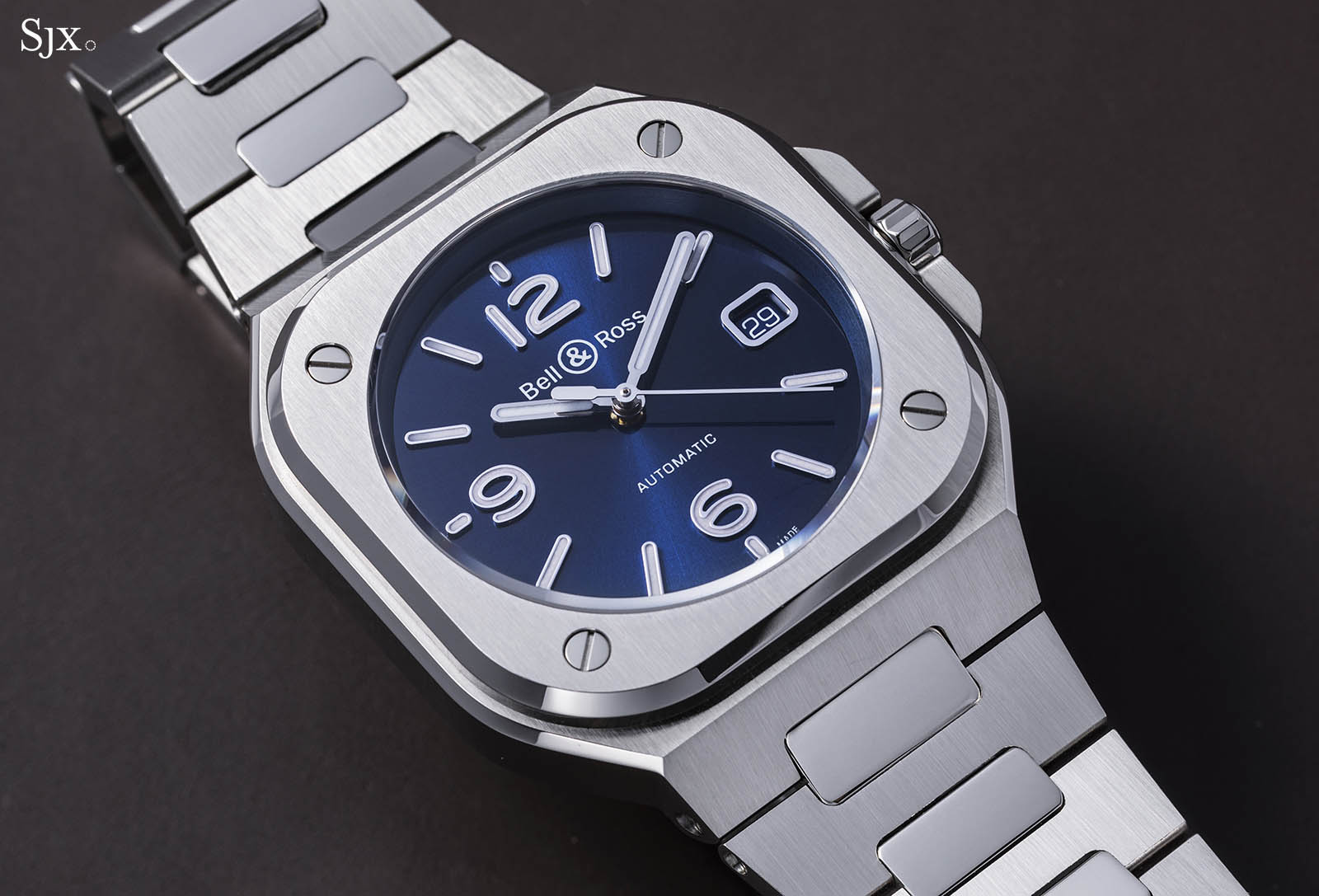 At first glance, the rounded-square case and bezel with visible screws inevitably brings to mind Gerald Genta’s classics. But on its own, the BR 05 is a logical derivative of the signature B&R case.

The BR 05 is a compact watch, with a wide bezel making it look slightly smaller than it actually is. The case measures 40mm across and 10.4mm in height, which is relatively slim and within the general ballpark of such watches. That being said, a case below 10mm would have given it more elegant and classical proportions.

And in contrast to the merely adequate depth rating of the typical luxury sports watch, the BR 05 is water-resistant to 100m. 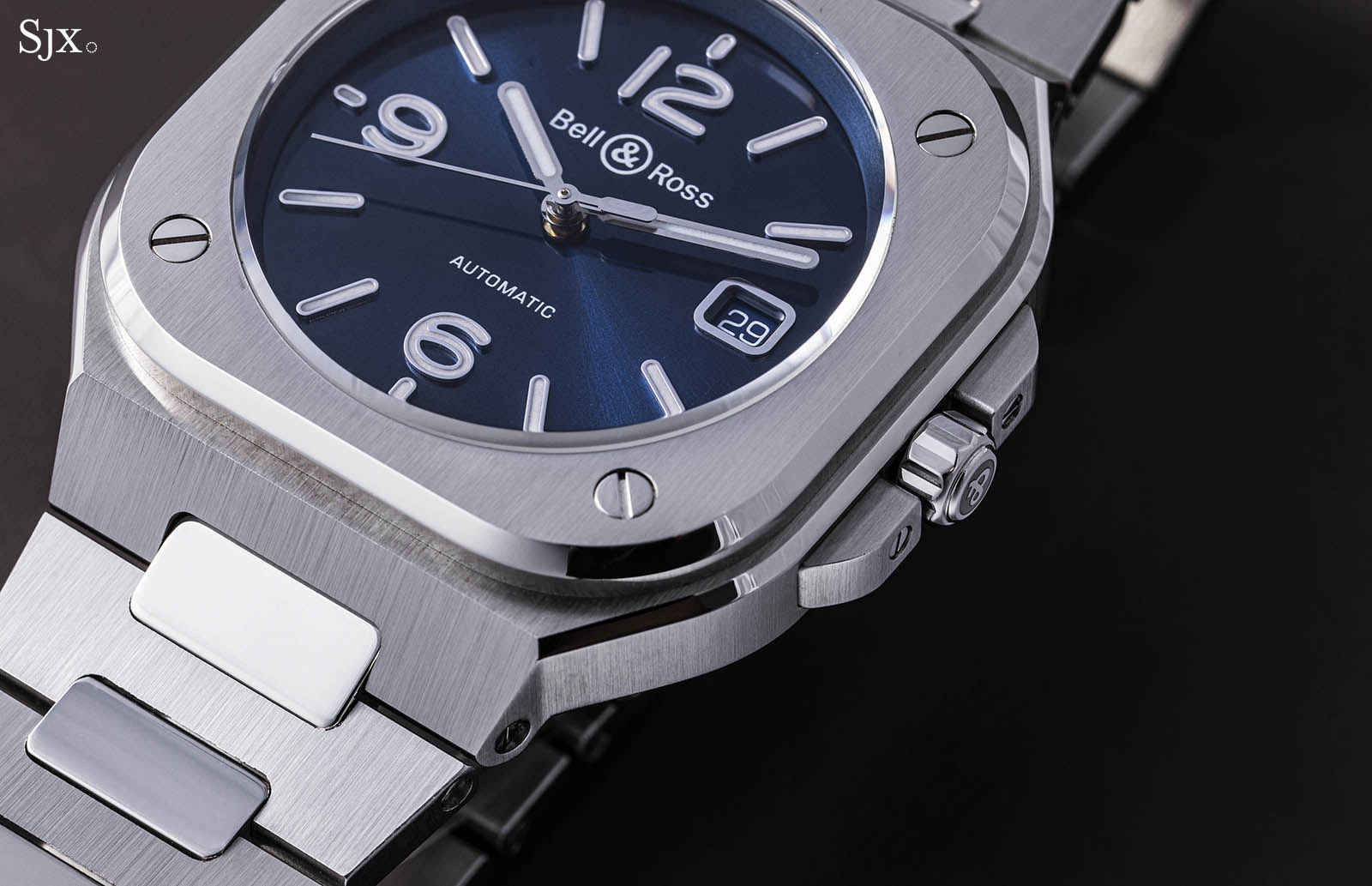 As with most B&R watches, the BR 05 case is made by G&F Chatelain, a respected case maker owned by Chanel, the parent company of B&R. It’s the same specialist that makes cases and buckles for the likes of MB&F and Richard Mille. Consequently, the case construction and finishing is excellent.

The visible screws on the front are all aligned perfectly with their slots in a 45-degree angle as they aren’t actually screws but rather nuts with square profiles that slot into the case from the top, and are secured by actual screws on the back. This is the same set up as found on the square BR 03 case, and also similar to the Audemars Piguet Royal Oak, which uses hexagonal nuts on the bezel. 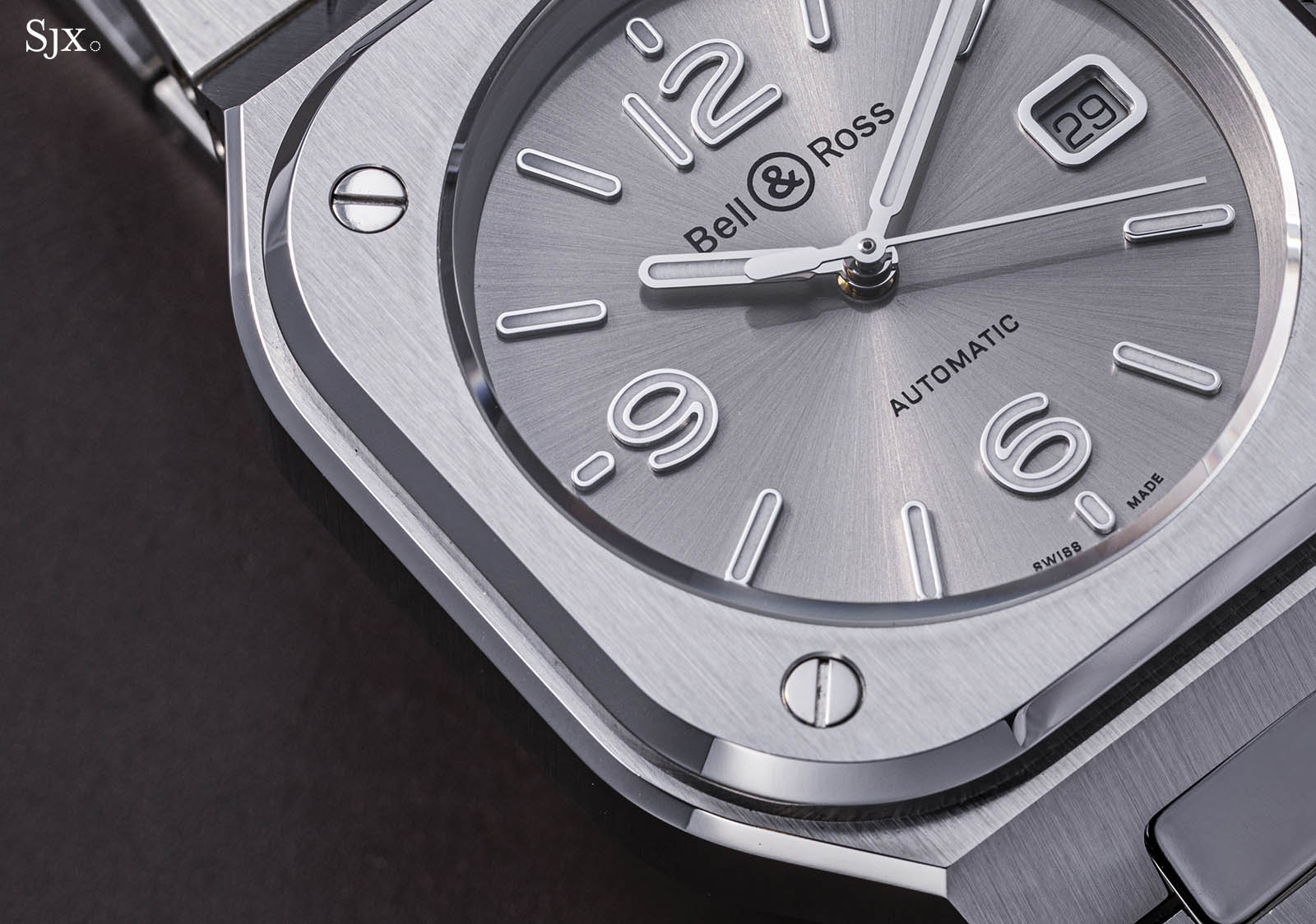 Nuts on the front… 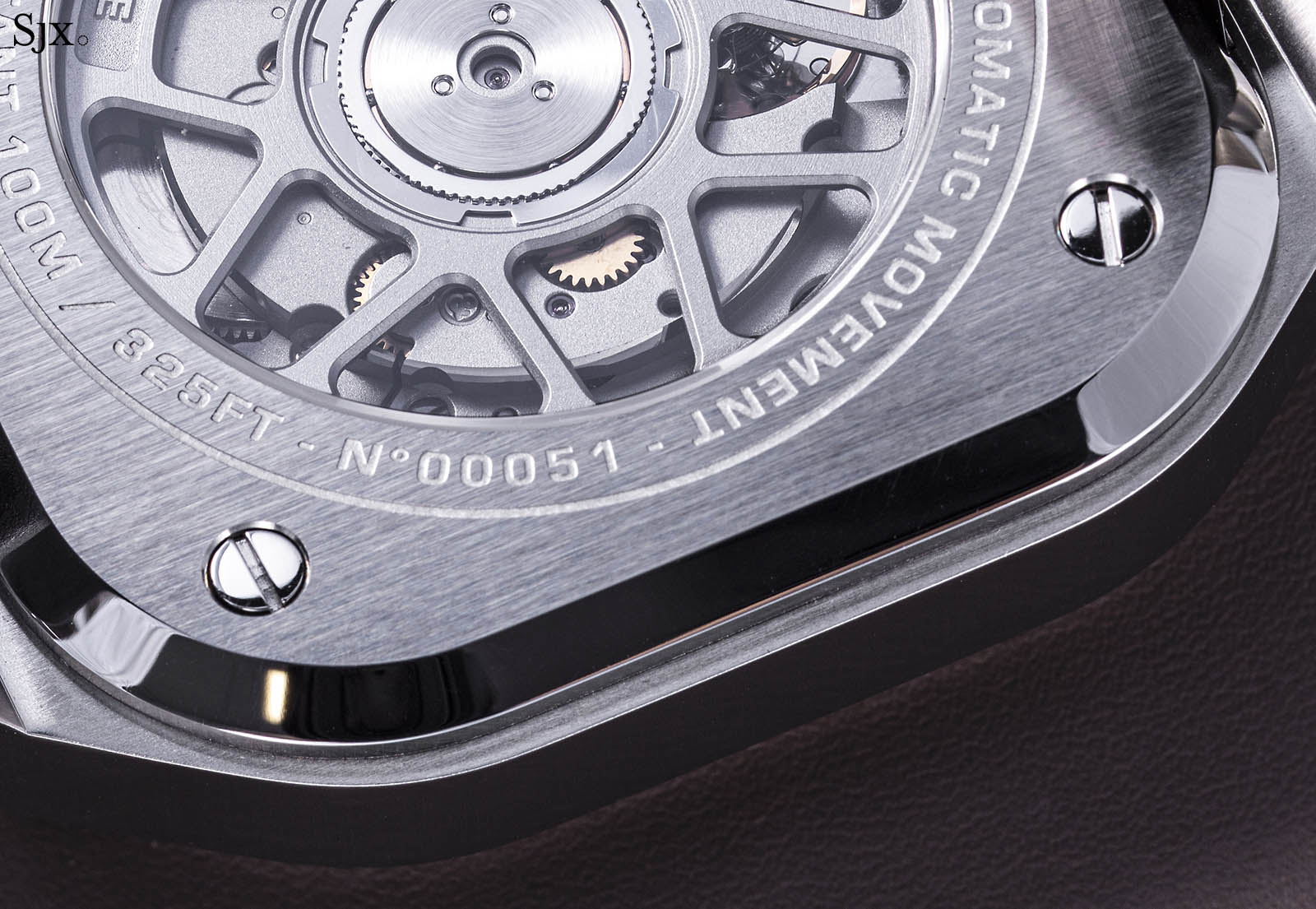 And screws on the back

A crucial element of the luxury sports watch genre is case finishing, and the BR 05 gets it right. While watch cases in this price segment are typically stamped, leaving the case edges imprecise, the BR 05 case has neat and well-defined edges.

It has alternating brushed and mirror polished surfaces that give the watch contrast and precise edges. The top surface and flanks of the case are satin-brushed, and separated by a wide polished bevel that accentuates the shape of the case. And like the BR03-92 Diver, the BR 05 features crown guards secured by screws. 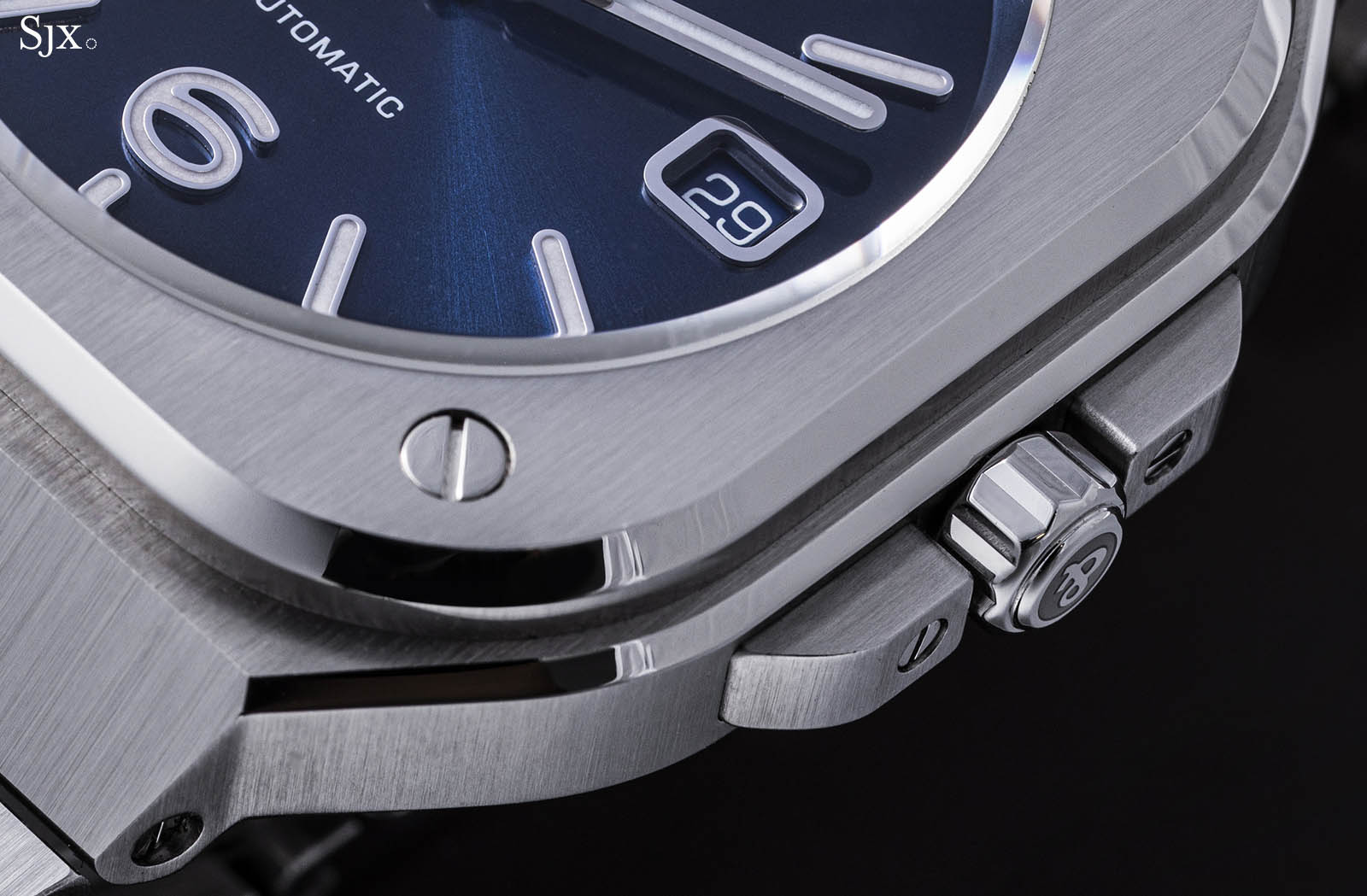 And importantly for a sports watch, the bracelet and case integrate well. The finishing of the case is echoed on the bracelet, featuring flat, brushed links with polished center links.

The bracelet is as well made as the case, but the bracelet design is admittedly similar to one of Genta’s designs. 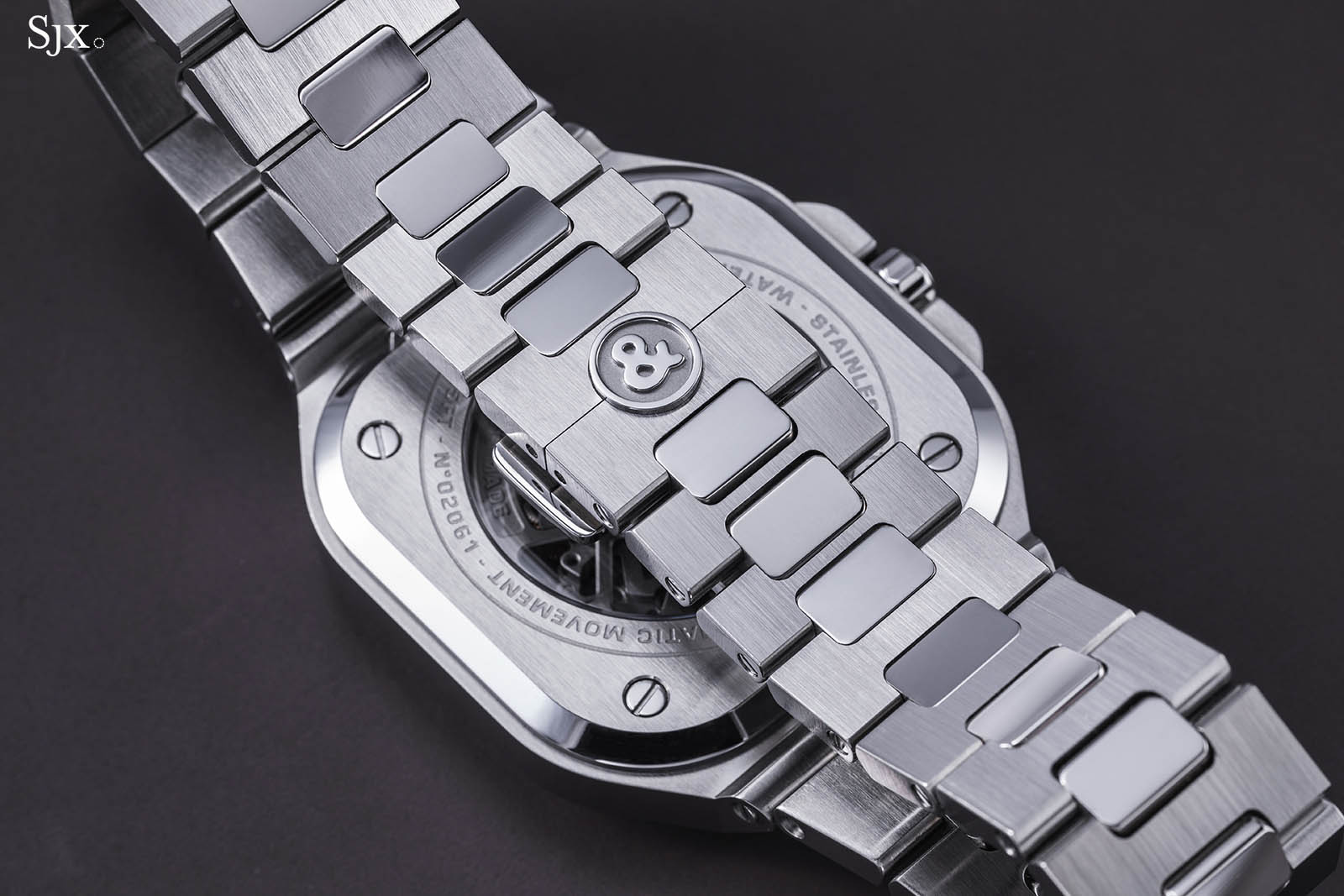 Another element that makes the BR 05 recognisable as a B&R watch is the no-nonsense dial with the trademark oversized Arabic numerals at the quarters and baton indices for the rest of the hours. For greater functionality, the numerals, indices and hands are all filled with Super-Luminova.

While the dial is derived from the earlier BR models, the baton hands deviate from the norm; I would have preferred different shaped hands. 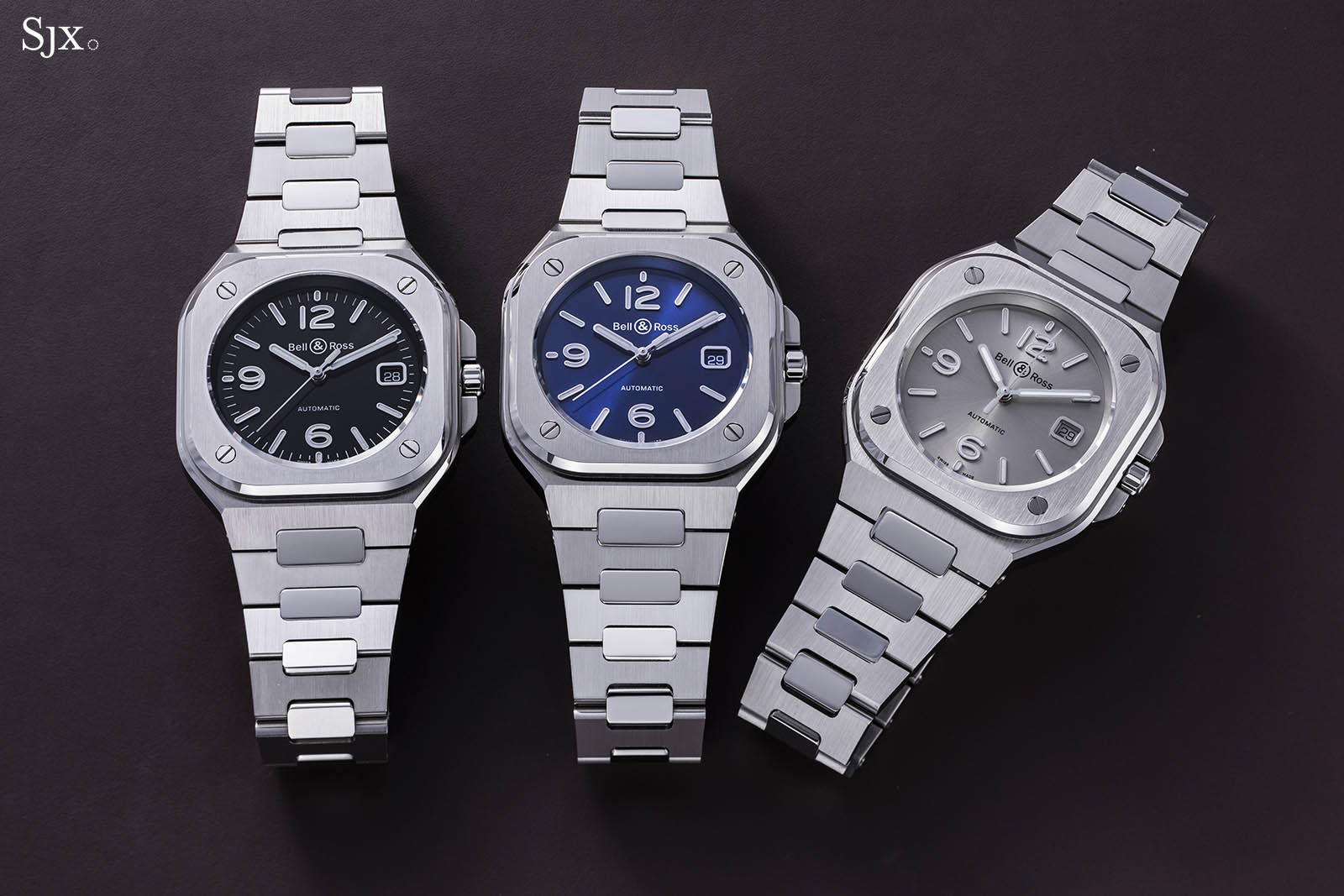 Available in blue, grey or black, the BR 05 dial has a simple sun-ray finish and is devoid of any unnecessary flourishes, allowing the overall design to become the focal point. The blue and grey dials do not have a minute track, making them feel a bit less functional. In contrast, the black dial is unapologetically stark and industrial, with its own identity and feel. 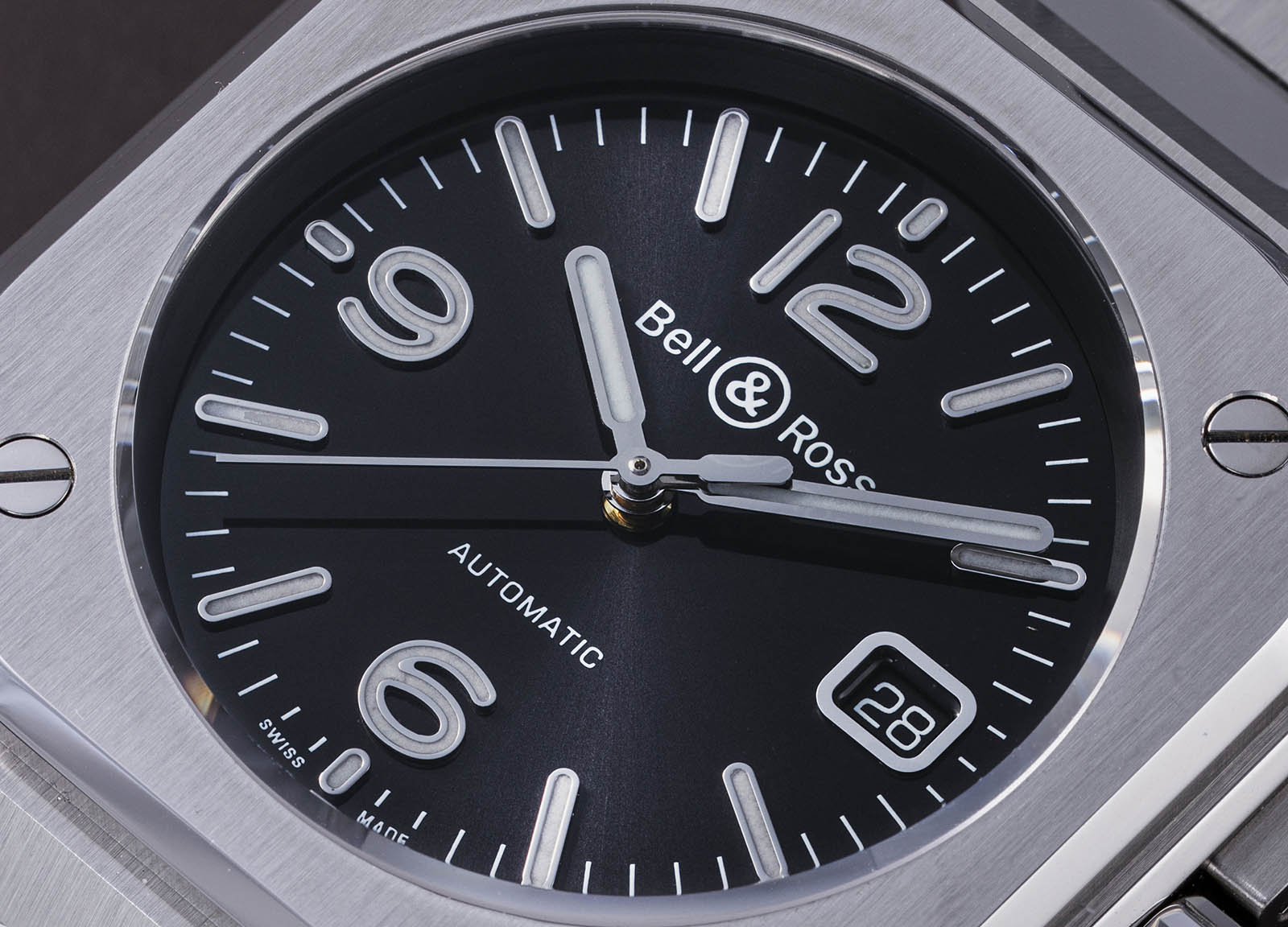 The date display at three o’clock is well integrated into the design of the dial, with the date wheel in a matching colour – a sensibility that many of its ilk do not share. It also has a thick frame, which matches the weight of the quarter-hour numerals.

Though the BR 05 incorporates the same workhorse Sellita SW300 (itself derived from the ETA 2892) used in most B&R watches, it has been customised to a greater degree than before. Named the BR-CAL.321, the movement features a uniform, granular frosting and an open-worked, full rotor. 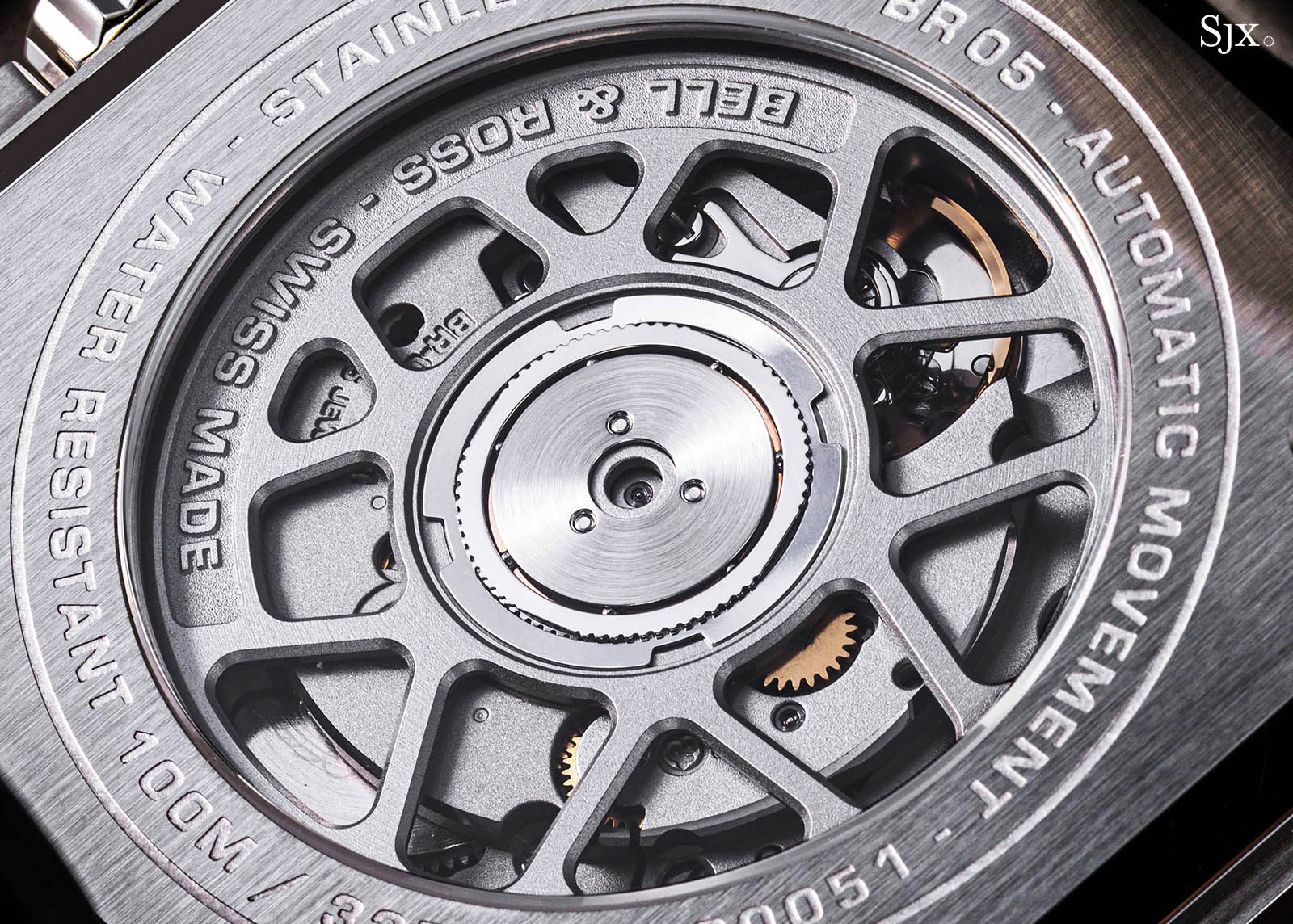 The rotor design is clever: to ensure the rotor is perfectly imbalanced – weighted enough on one side to wind the mainspring – it has been asymmetrically skeletonised, leaving more mass on one half. 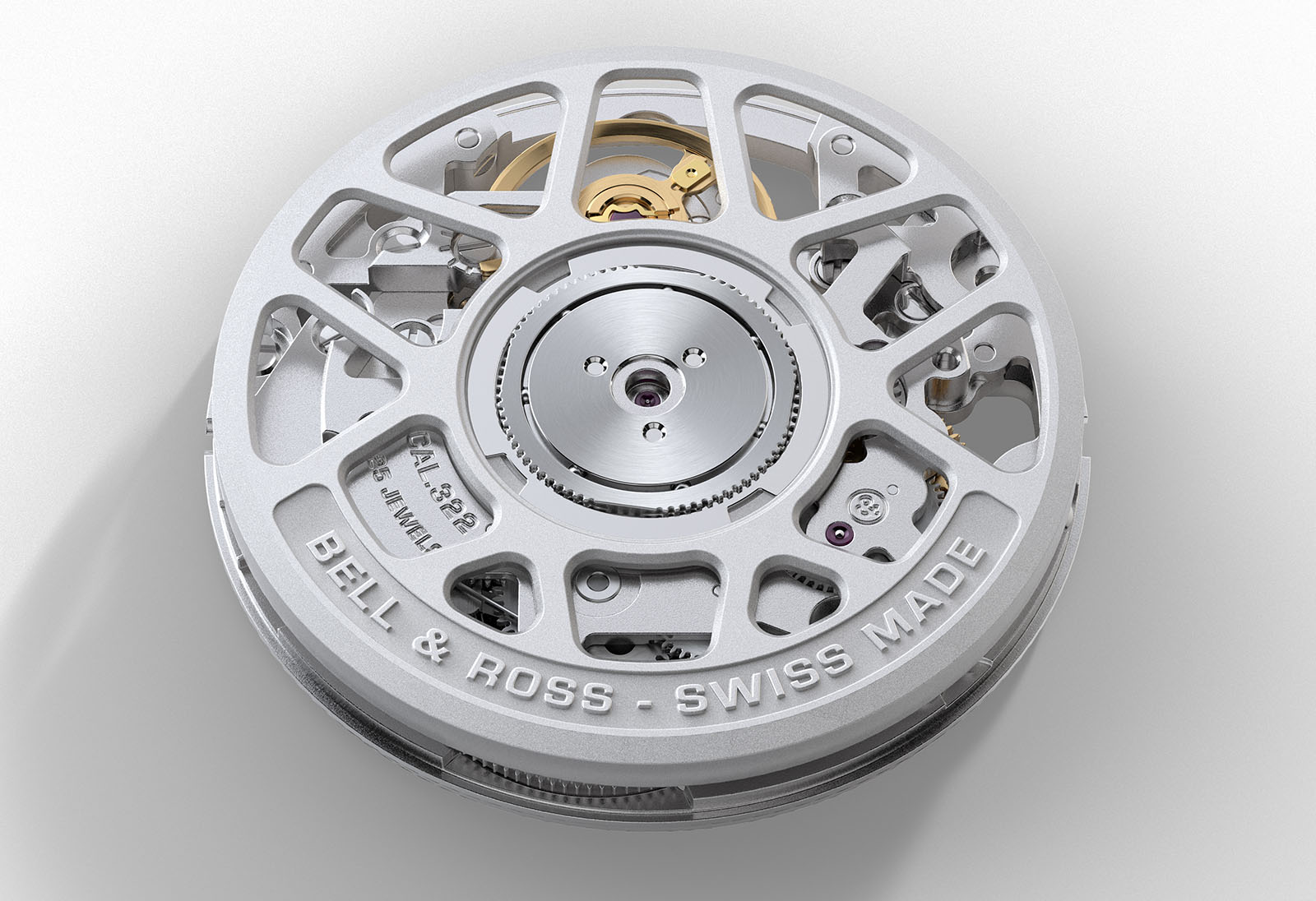 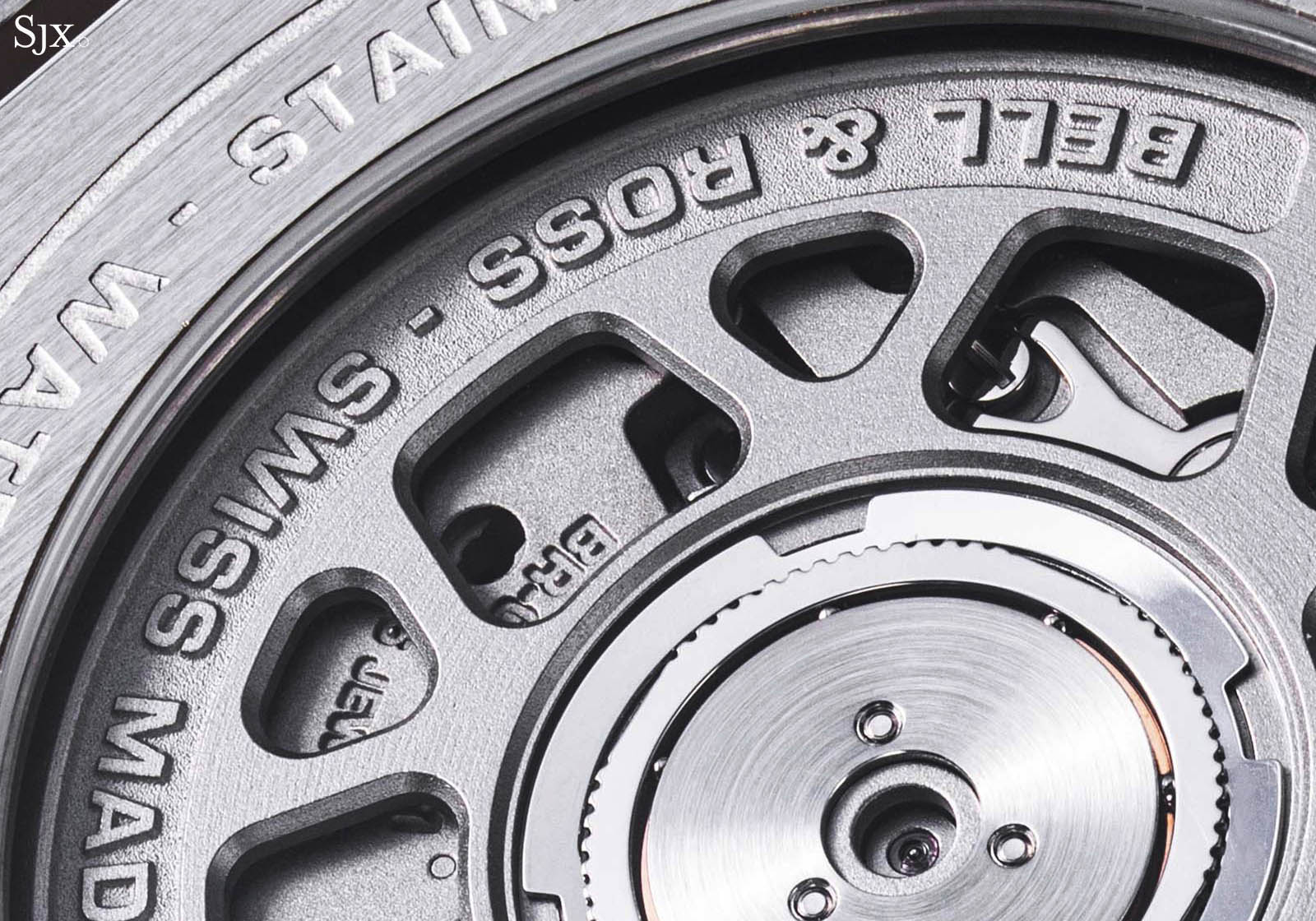 The other modifications are cosmetic but attractive and well suited to the watch. The bridges, base plate and rotor have a consistent sandblasted finish. And the spokes of the rotor are all machine-bevelled for a consistent aesthetic, with the brand name engraved in relief on the periphery. In all, the finishing is clean and fair for the price range.

For many other brands, launching a steel sports watch can seem like an impetuous throw of the dice, since such a watch departs from the norm of small, classical dress watches. But for B&R, it makes sense and the move feels natural.

Then there is the question of design. While the BR 05 is inevitably reminiscent of the all-time greats, its price point puts it in a class where it stands apart, offering a case style and quality usually found at higher price points.

Above all, the BR 05 also makes a case for taking it on its own merits; it is inherently a variation of the classic B&R aviation-inspired watch, with a little bit of 1970s inspiration thrown in.