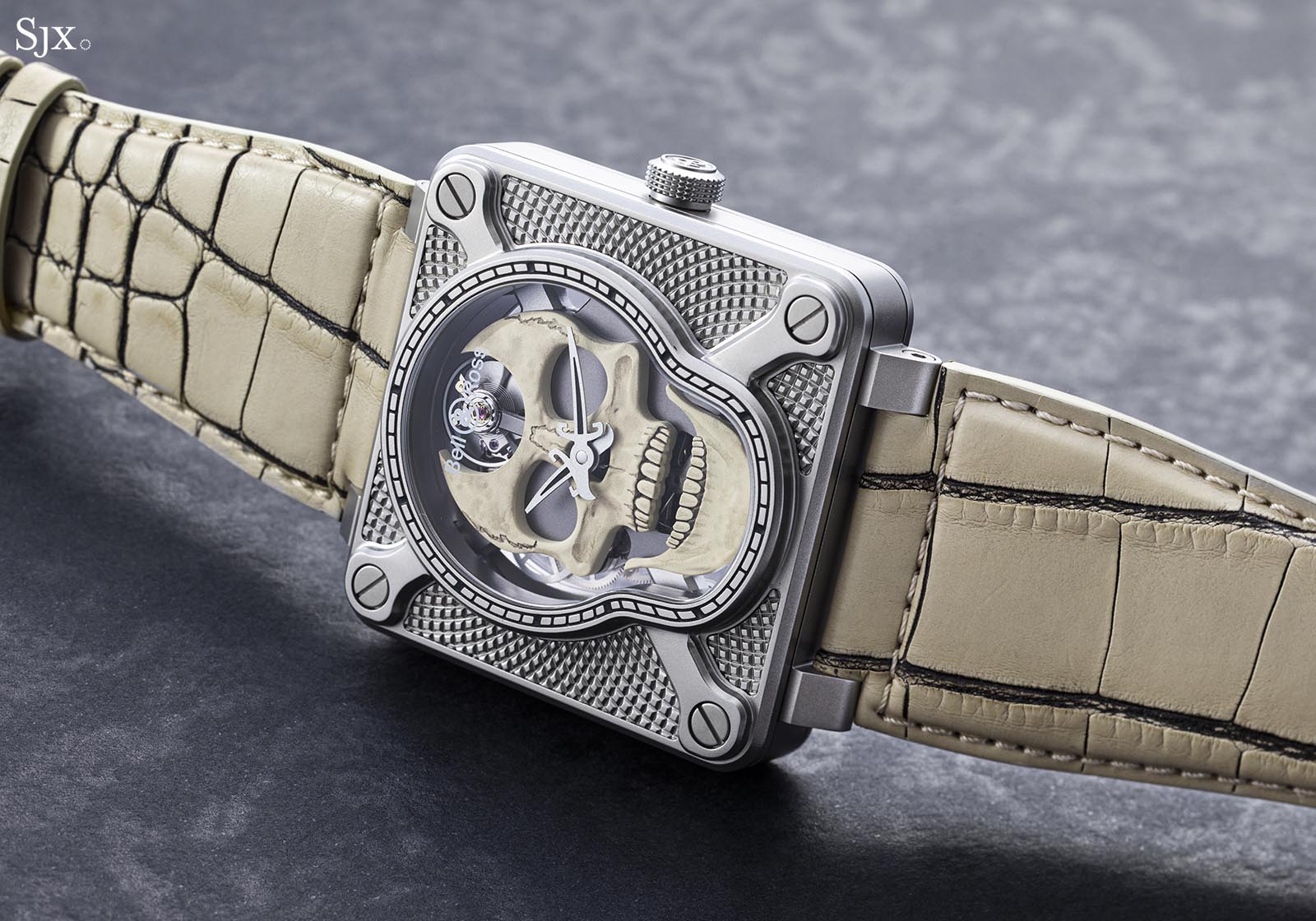 While skull watches are very much today’s fad, Bell & Ross’ use of the Jolly Roger started a decade ago with the BR 01 Skull, with its square watch case being a perfect frame for a bony visage.

The brand’s skull watches have proliferated since then, but the evolution had been purely cosmetic, until last year when the brand unveiled a watch as elaborate mechanically as it is aesthetically – the BR 01 Laughing Skull, powered by a proprietary movement with a simple automaton of a skull that opens and closes it jaw.

And this year, B&R has introduced the BR 01 Laughing Skull White, with the skull finished in a bone-like lacquer. 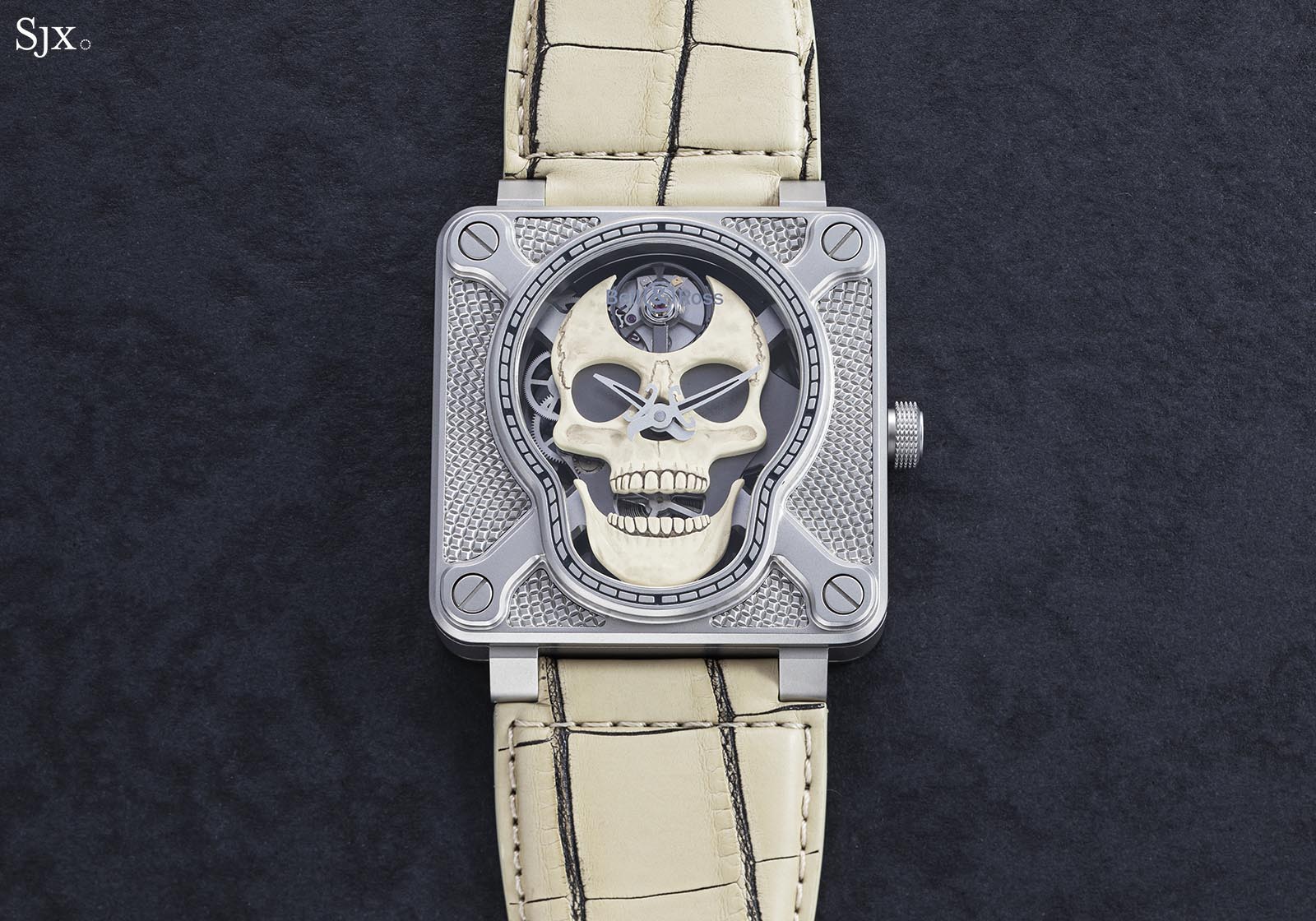 Like all BR-01 watches, the case is 46mm wide, but it is a tad thicker than the static skull watches at 13.5mm high, but that’s a functional requirement, a result of the automaton on the movement. In short, it is a large watch, but that’s exactly the point.

The case is sandblasted steel and is decorated with stamped hobnails on the top surface and case back, giving it a pronounced, distinctive character.

And it is worth noting the unusual finish of the skull would work quite well with a case in bronze, a material that B&R has used liberally in the past and will probably continue to.

The dial features a photo-realistic appliqué skull that’s been stamped out of brass, and then painted matte off-white with shading to create shadow and depth. The result is striking – at a distance, the skull is seemingly projecting out of the case.

While the finish of the skull is new, the layout is identical to the first Laughing Skull, with a circular opening in the forehead that reveals the balance wheel. And in keeping with the Jolly Roger theme of B&R’s skull watches, the hands are shaped like cutlasses and filled with black Super-Luminova that doesn’t glow very much in the dark but it offers a greater contrast in daylight than white “lume”. 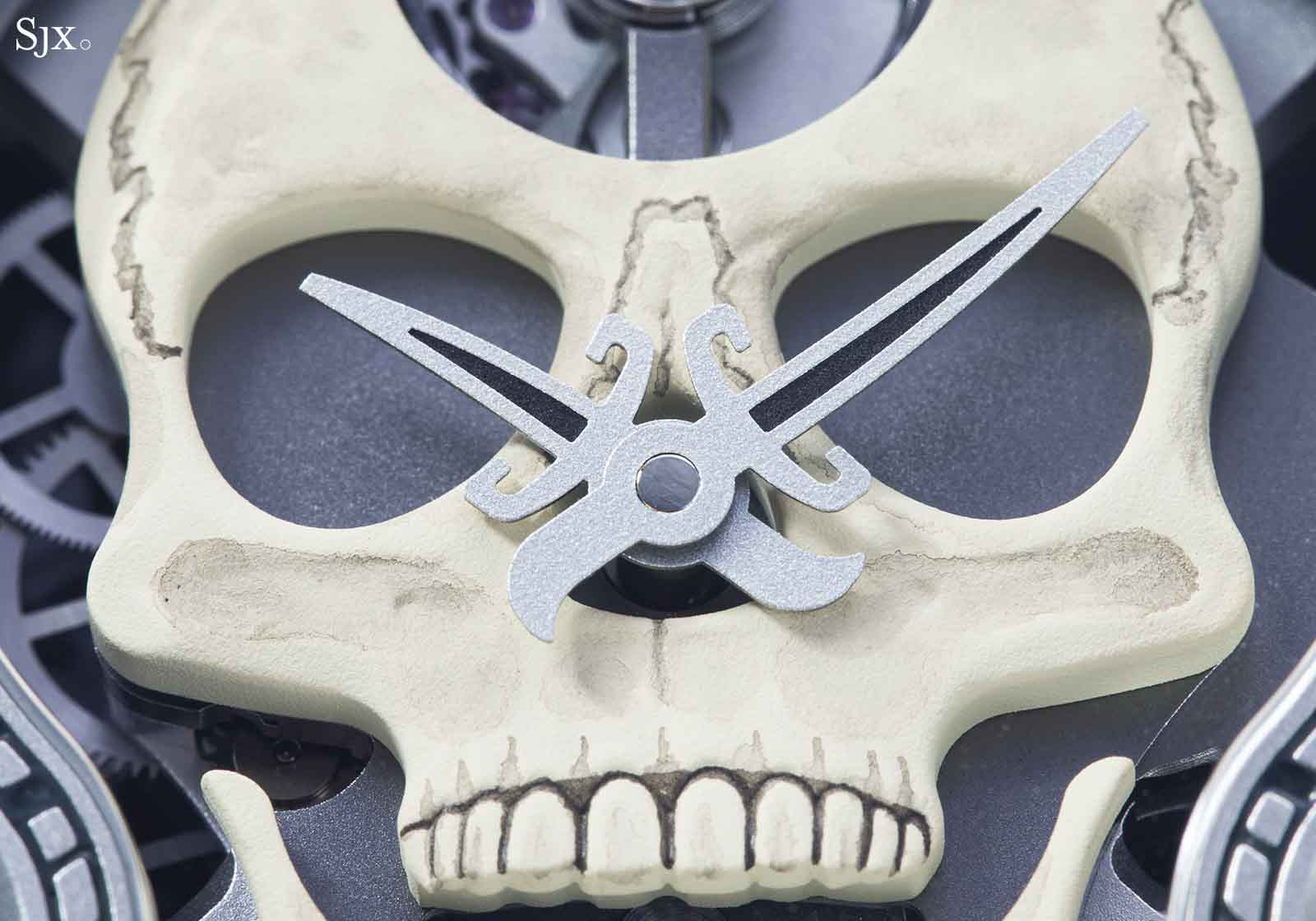 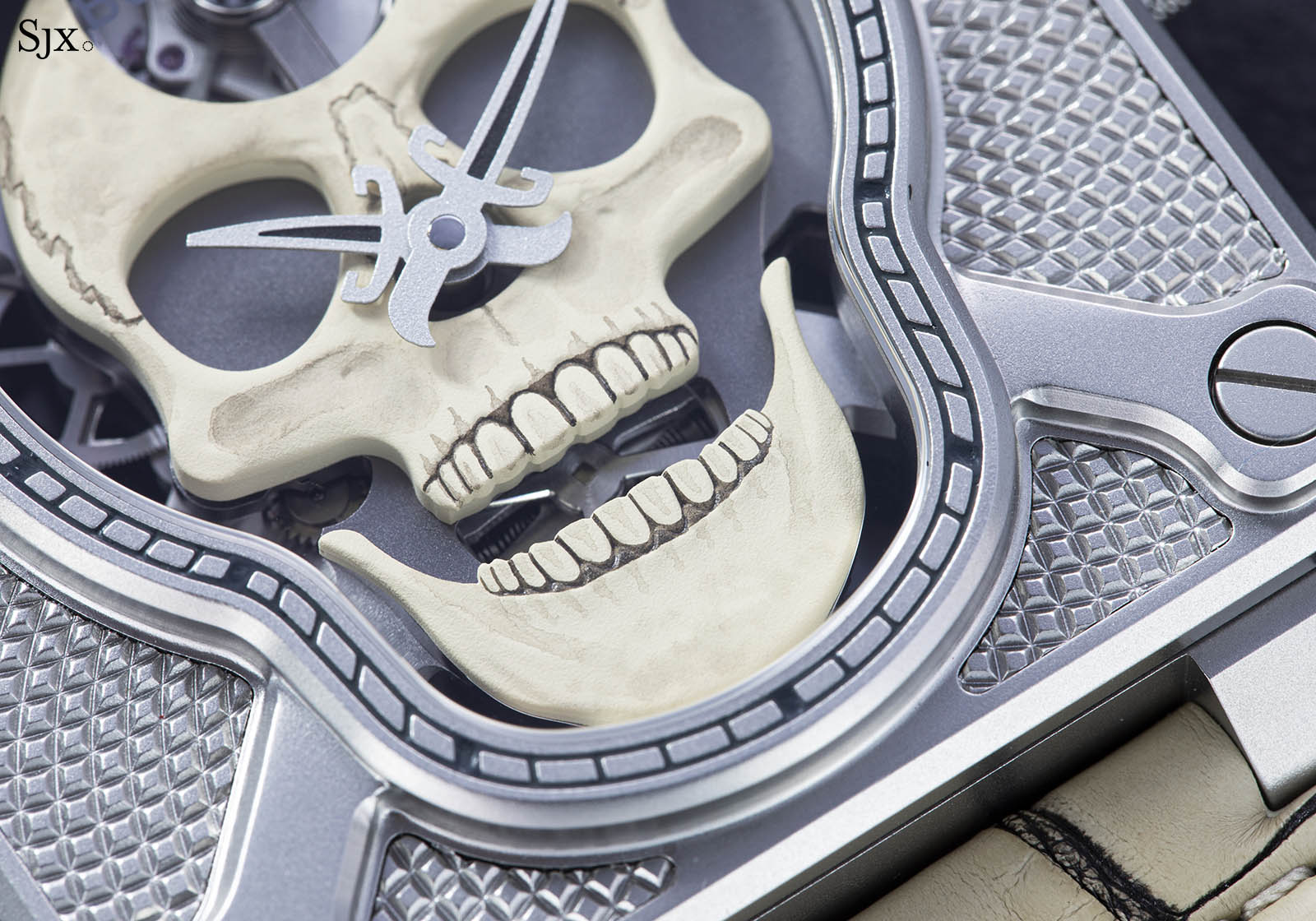 The dial is further accentuated by a skull-and-crossbones bezel secured to the case by four screws. The screw slots are all perfectly aligned at a 45-degree angle as they are actually bolts secured by screws visible on the case back.

Inside is the hand-wound BR-CAL.206 that was developed by Concepto, a complications specialist that supplies a broad range of movements to numerous niche and independent brands.

The movement was conceived from the ground up for a skull watch, with the full bridge and base plate shaped like a skull. It’s completed by four arms shaped like a crossbones to secure the movement to the case.

The movement is laid out vertically: the barrel is located right behind the jaws of the skull while the balance wheel is at 12 o’clock.

As the barrel ratchet wheel is at six o’clock, with the crown wheel just above, it conveniently facilitates a simple mechanism that drives the movement of the jaw via the ratchet wheel.

When the movement is wound, the jaws of the skull open and shut, with the speed of its motion proportional to the speed at which the crown is being turned. So the jaws move relatively slowly at the ordinary rate of winding, though the visual effect when sped up is quite amusing. 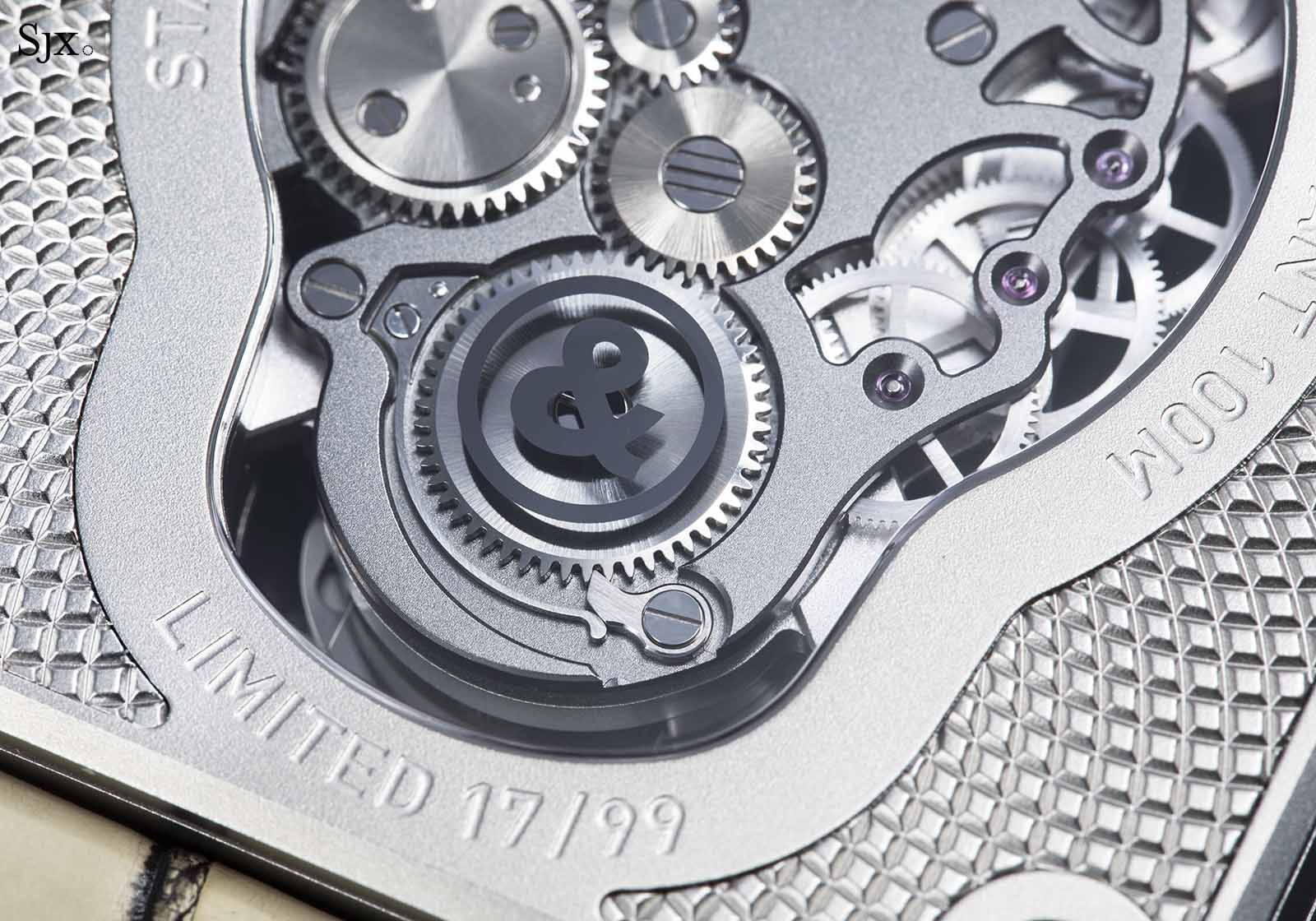 The barrel ratchet, right under the B&R logo, and winding click with an elongated spring

Skull automaton aside, the movement is unusual because it has twin going trains. Visible through the sapphire case back, the going train runs along the edge of the skull, linking the barrel to the balance wheel.

To facilitate this design, a separate gear train is required to drive the hands at the center of the dial. This secondary train is hidden under the full bridge, and connects the hands to the visible gear train on the back.

This dual train construction, along with the automaton mechanism linked to the barrel, results in the added height of the movement. 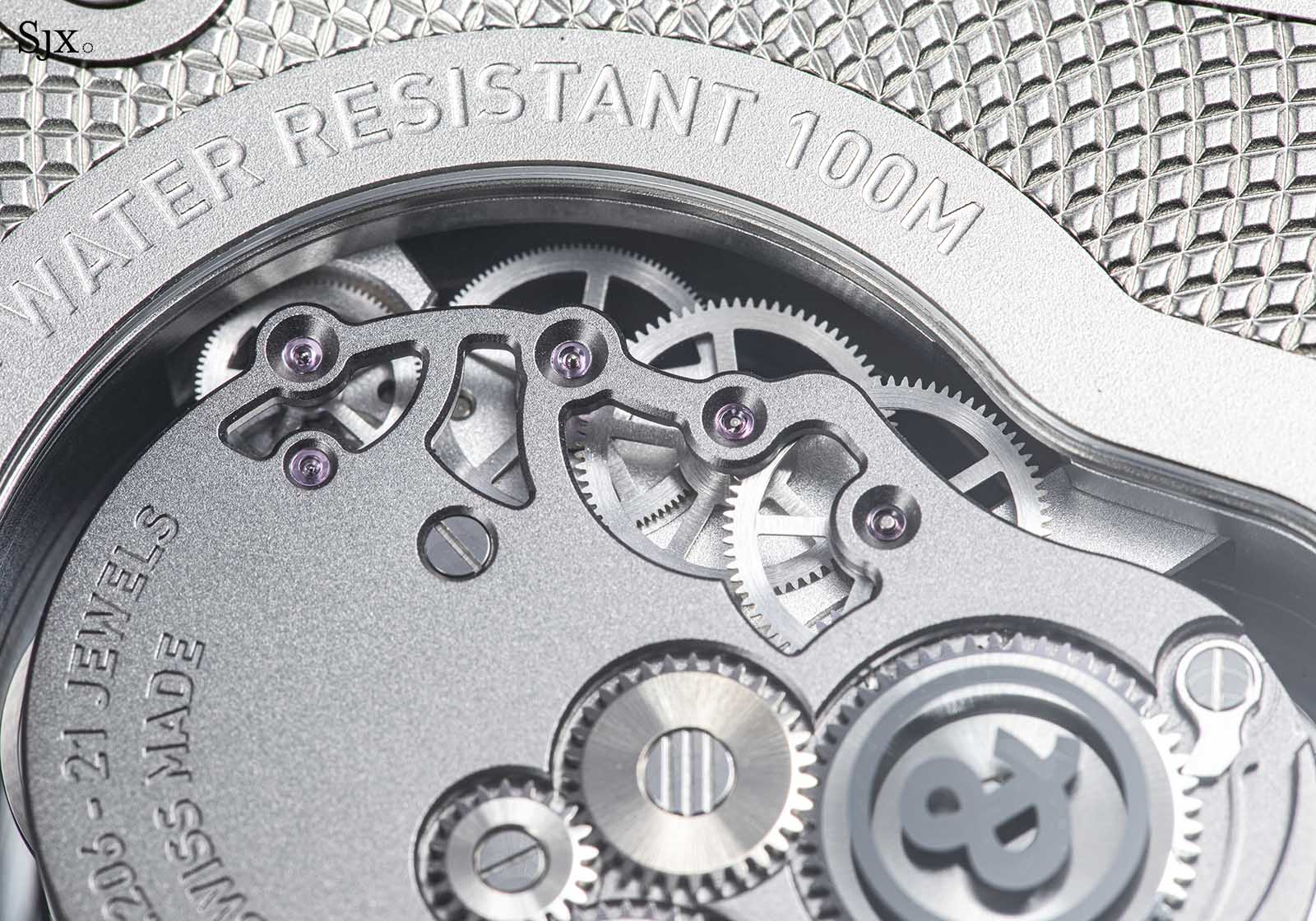 The Laughing Skull White is the pinnacle of the B&R skull series, because it is more than just a design tweak – it’s a skull watch with a skull movement.

Though pricier than the average B&R watch, it is only 30% more than the standard BR01 skull model powered by a stock Sellita movement. Given it has a new form movement, with an automaton to boot, the price is pretty reasonable.

Also, the watch is delivered on an ivory alligator hide strap that makes a loud statement. A plainer, perhaps black, strap would probably work better in keeping attention on the skull.

Taking nocturnal legibility to the extreme.