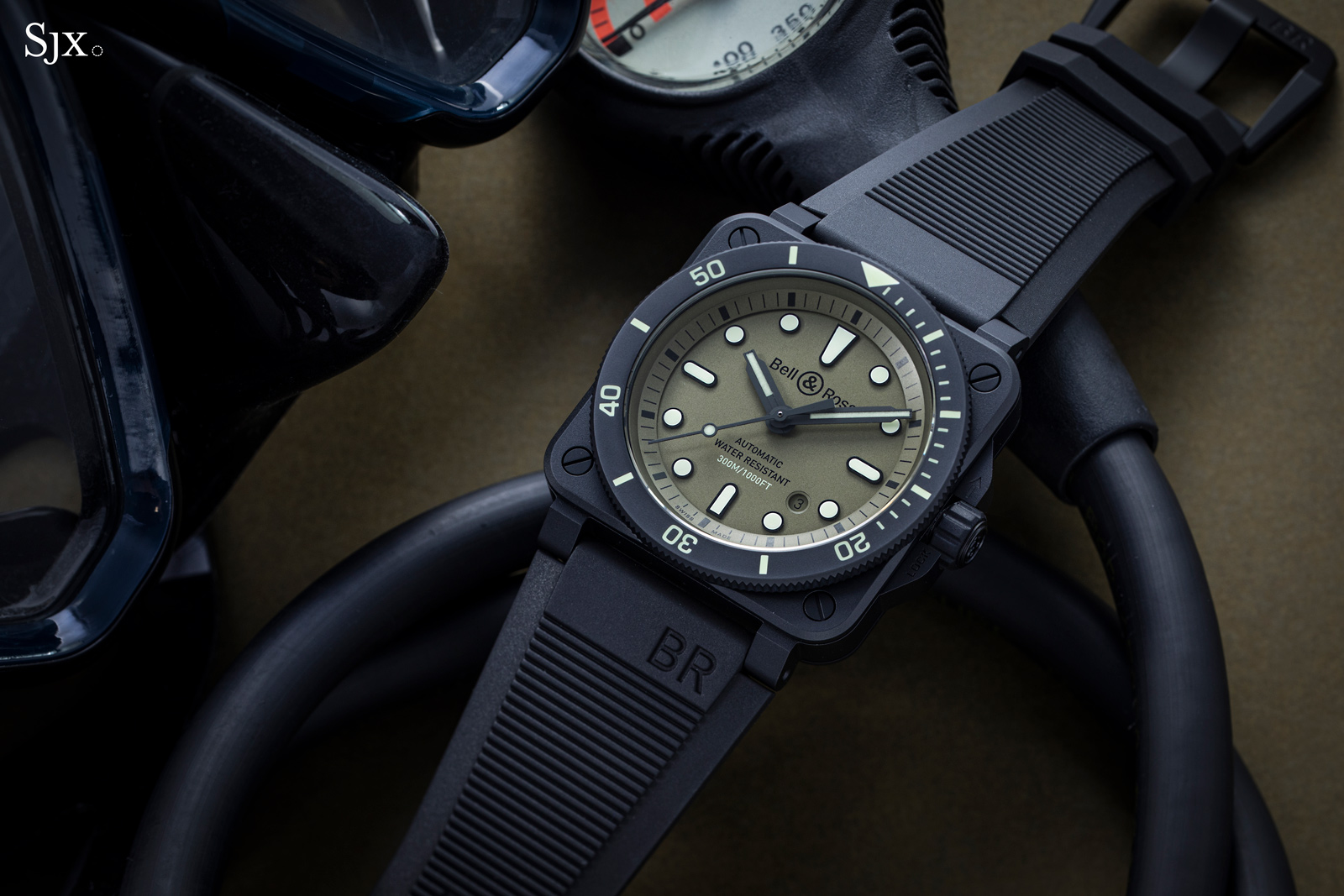 Though taking the form of its signature aviation-instrument watch, the Bell & Ross BR 03-92 Diver Military is the latest in a lineage of dive watches that started in 1997.

Pilot’s watches are its bread and butter, but Bell & Ross (B&R) has been making high-spec dive watches almost since its founding in 1992. Five years later it launched the Hydromax, which was created in collaboration with Sinn. Featuring a case filled with incompressible synthetic oil, the Hydromax boasted a staggering water-resistance rating of 11,100 m.

Two decades later, B&R launched the BR 03-92 Diver, which transformed the aviation-instrument case into a diving tool with a 300 m depth rating. First unveiled in steel, and subsequently also in either bronze or ceramic, the newest iteration of the BR 03-92 Diver has a functional olive-green dial that evokes the military inspiration behind many of the brand’s watches. 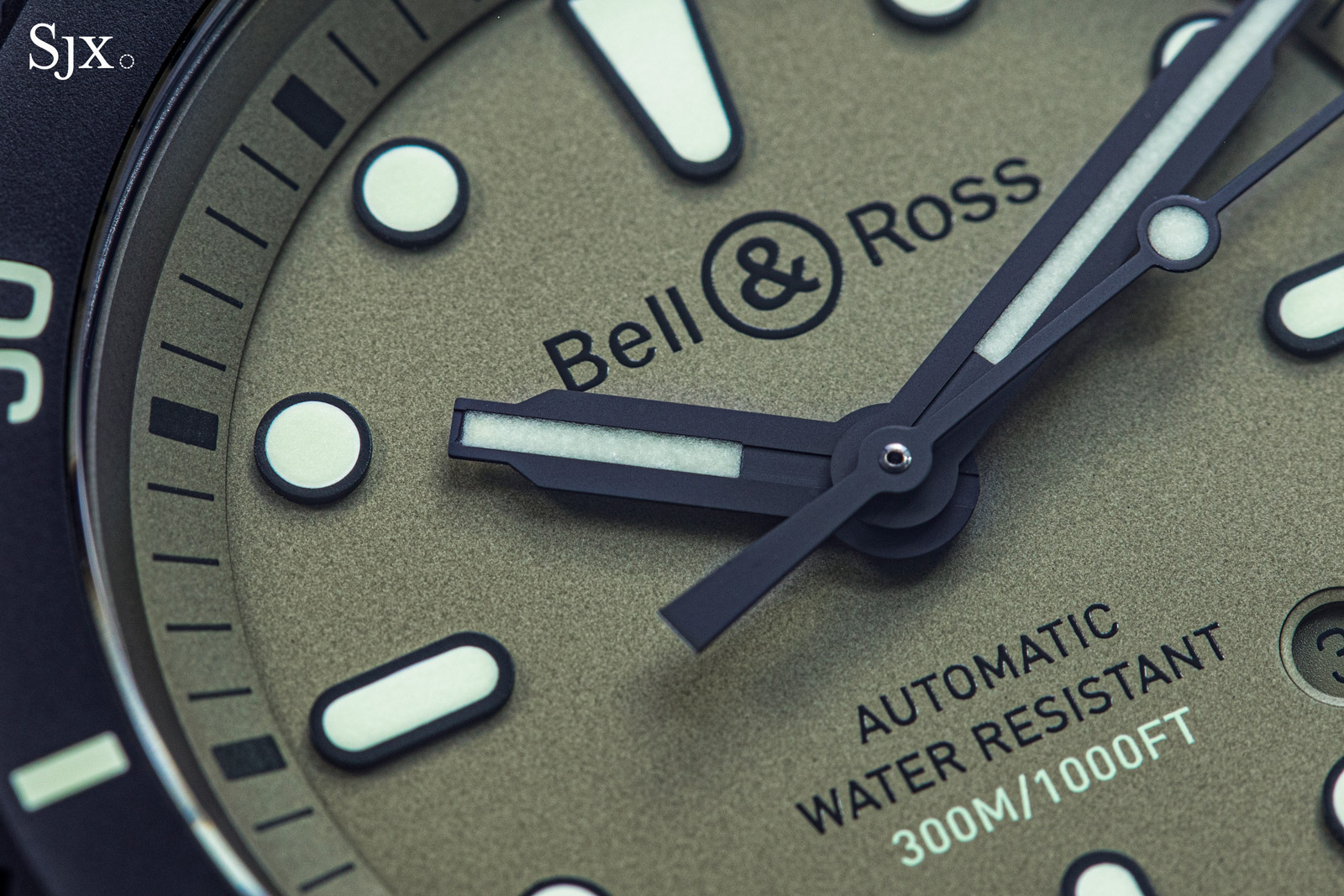 While green seems to be the colour du jour for 2021, the olive-drab dial colour underscores the B&R spirit perfectly. The brand often looks to the military for inspiration – and has made watches for both police and military units in France – while being inclined towards a vintage style, particularly in its round watches.

Best described as a retro-military colour that evokes uniforms and equipment of 20th century wars, olive drab avoids looking modish, in contrast to the metallic or smoked green dials that are all the rage now, as exemplified by IWC and Audemars Piguet. 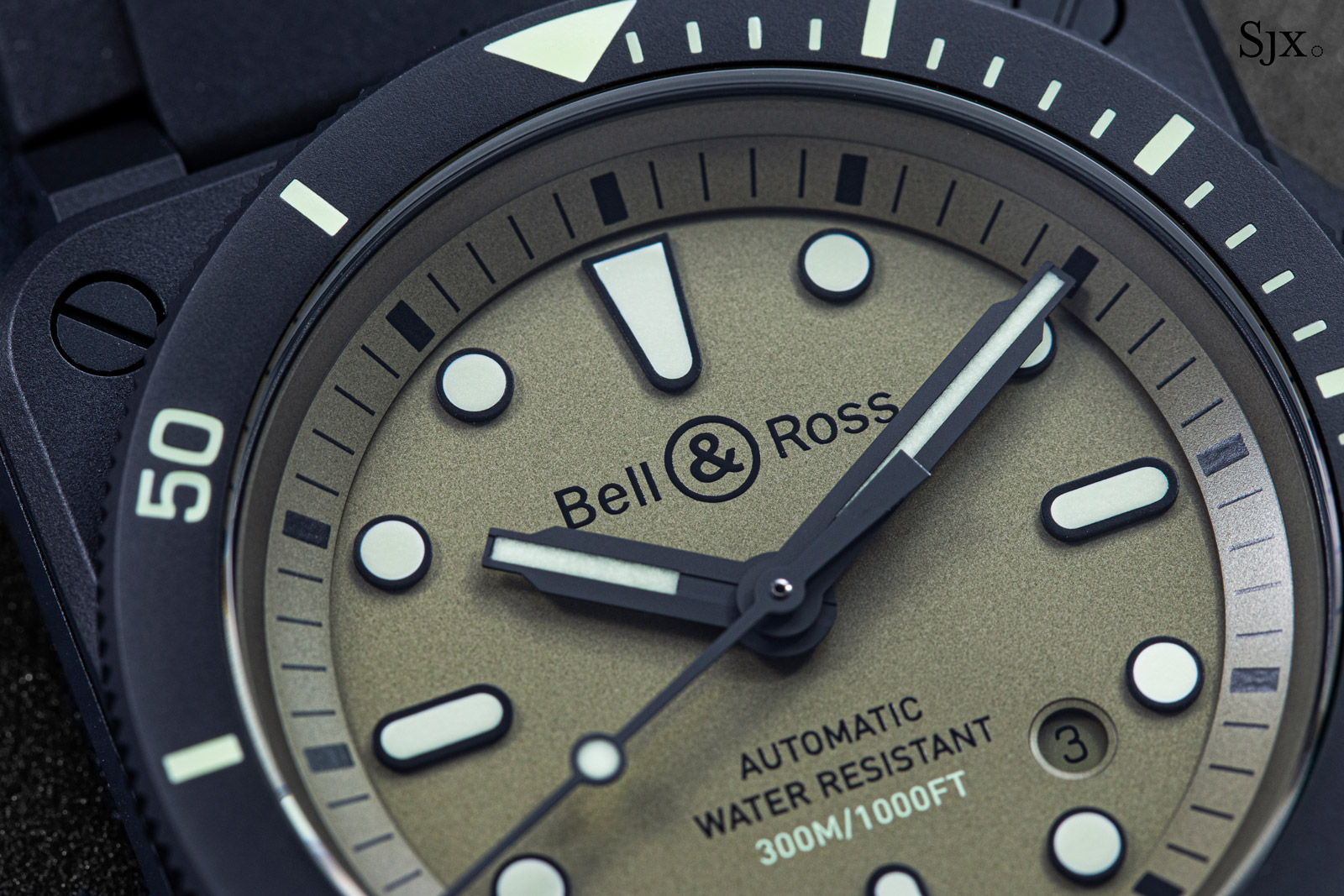 In fact, the green complements the stealthy black ceramic case perfectly. Together, black and olive results in a rugged look that is striking despite the muted colours, one that wouldn’t look out of place on military fatigues, wetsuit, or more likely a polo t-shirt and jeans.

And while dive watches are now well and truly common, the BR 03-92 Diver stands out with its trademark square case. It’s immediately recognisable as a B&R watch, especially in this military-inspired colourway. 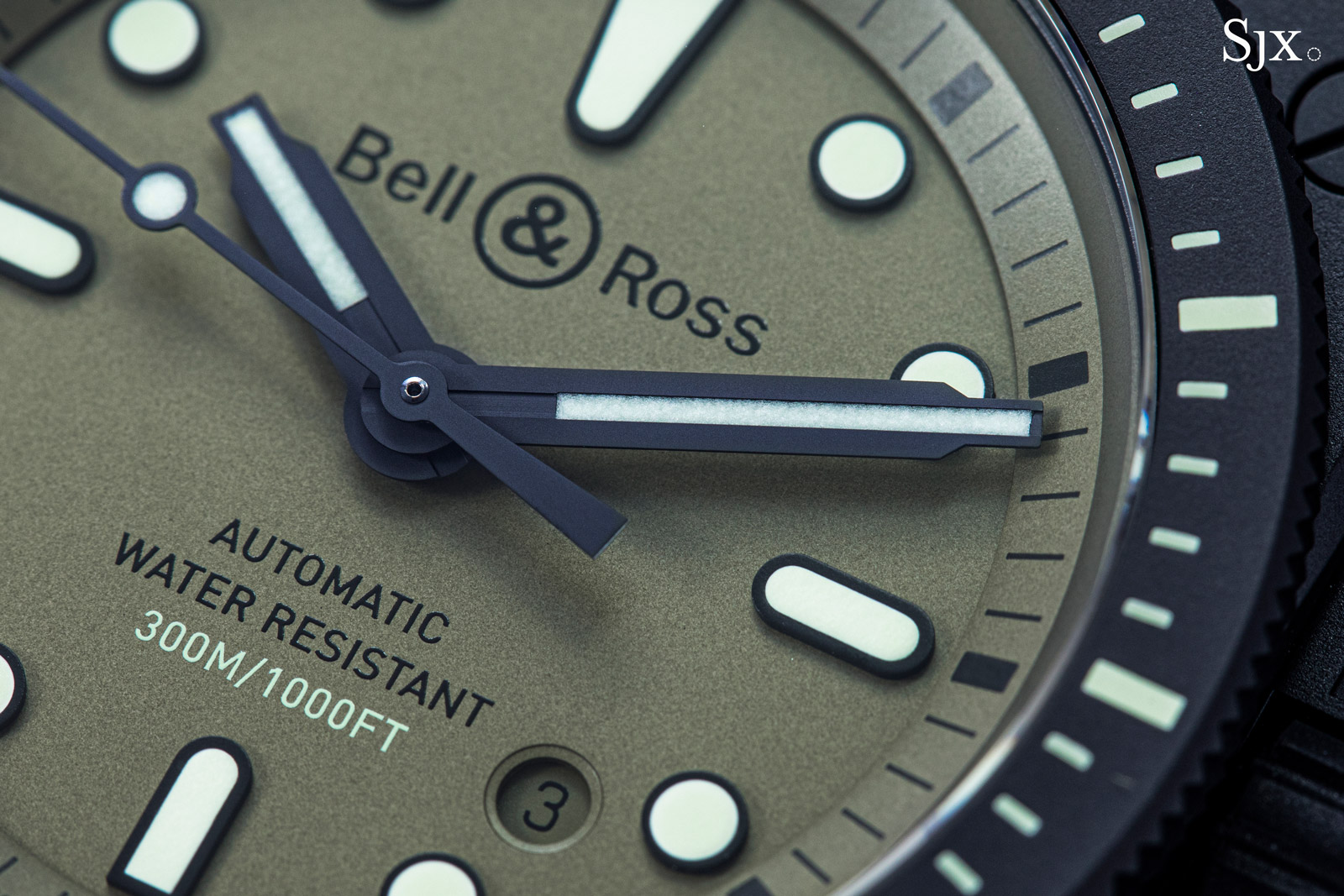 I’ve tried the BR 03-92 Diver Military on the wrist, and I must say that I found it to wear pretty well. At 42 mm wide and 9.8 mm high, it is has reasonable dimensions as far as large dive watches go; in fact, it is fairly slim.

The BR 03 is arguably the perfect size for the B&R square case – eminently more wearable than the 46 mm BR 01, but having sufficient wrist presence unlike the smaller, 39 mm BR S for ladies. 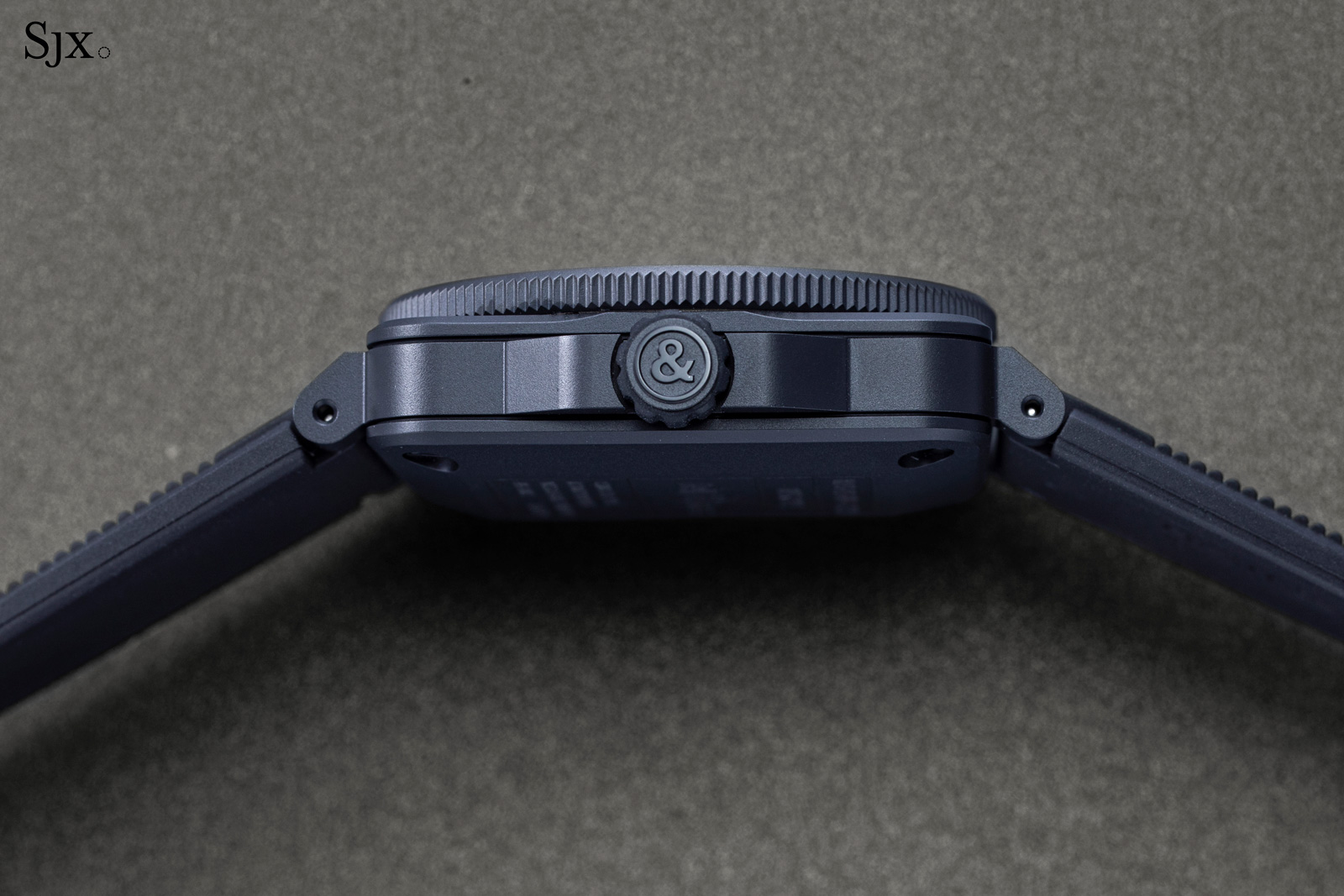 Large, but not overly so

The olive green dial of the BR 03-92 Diver Military reveals itself to be well done when viewed up close. And the view is clear as the crystal features anti-reflective coating on its underside. The dial has a sandblasted finish that reinforces the utilitarian design, while the black-coated indices and hands add to the “tactical” feel.

While I’m usually not a fan of a date display, here it’s executed in olive and black, allowing it to integrate well into the dial. As a result, the date is almost camouflaged, but still present when necessary. 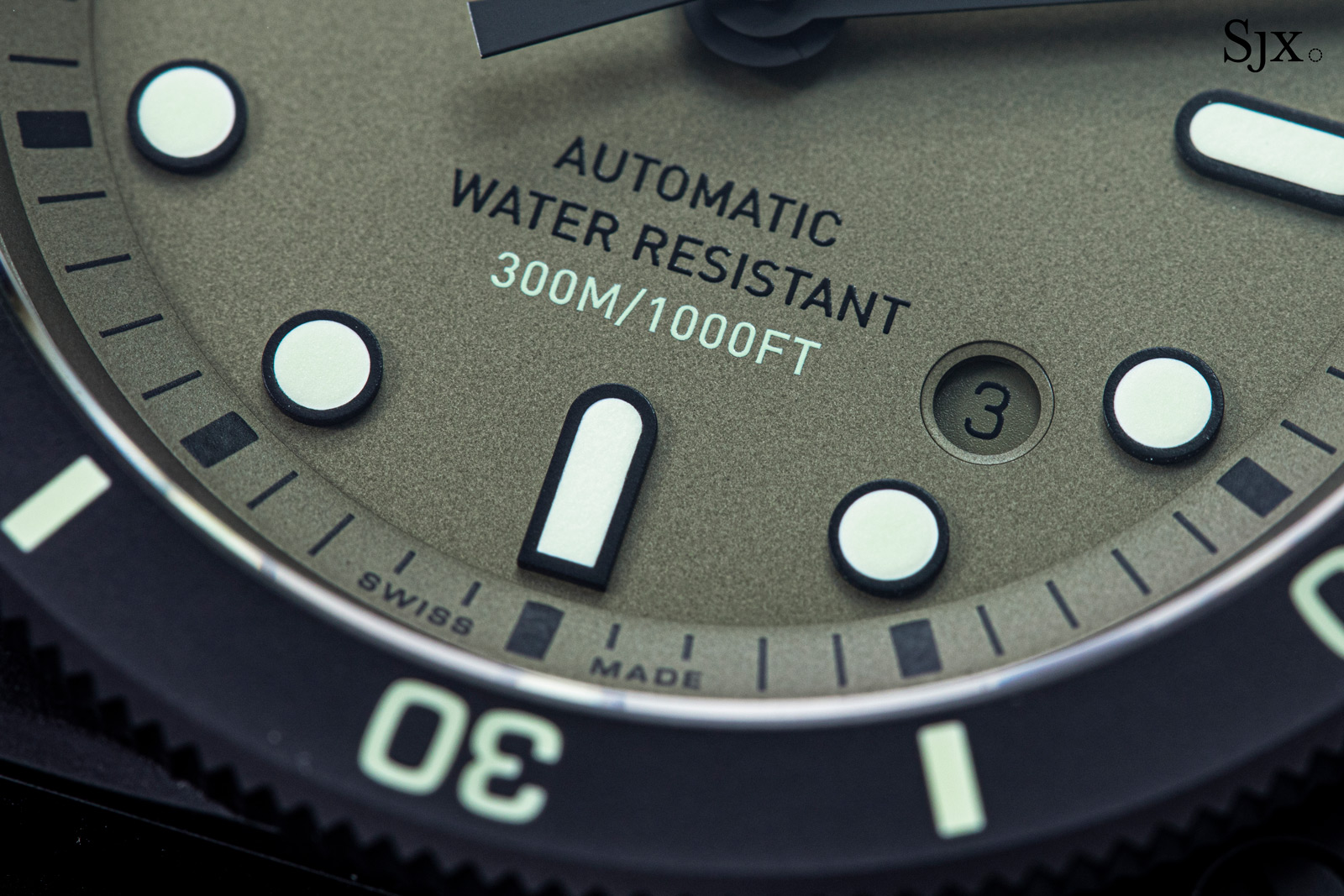 Another notable detail is the luminous depth rating on the dial, which is the only lettering that glows in the dark 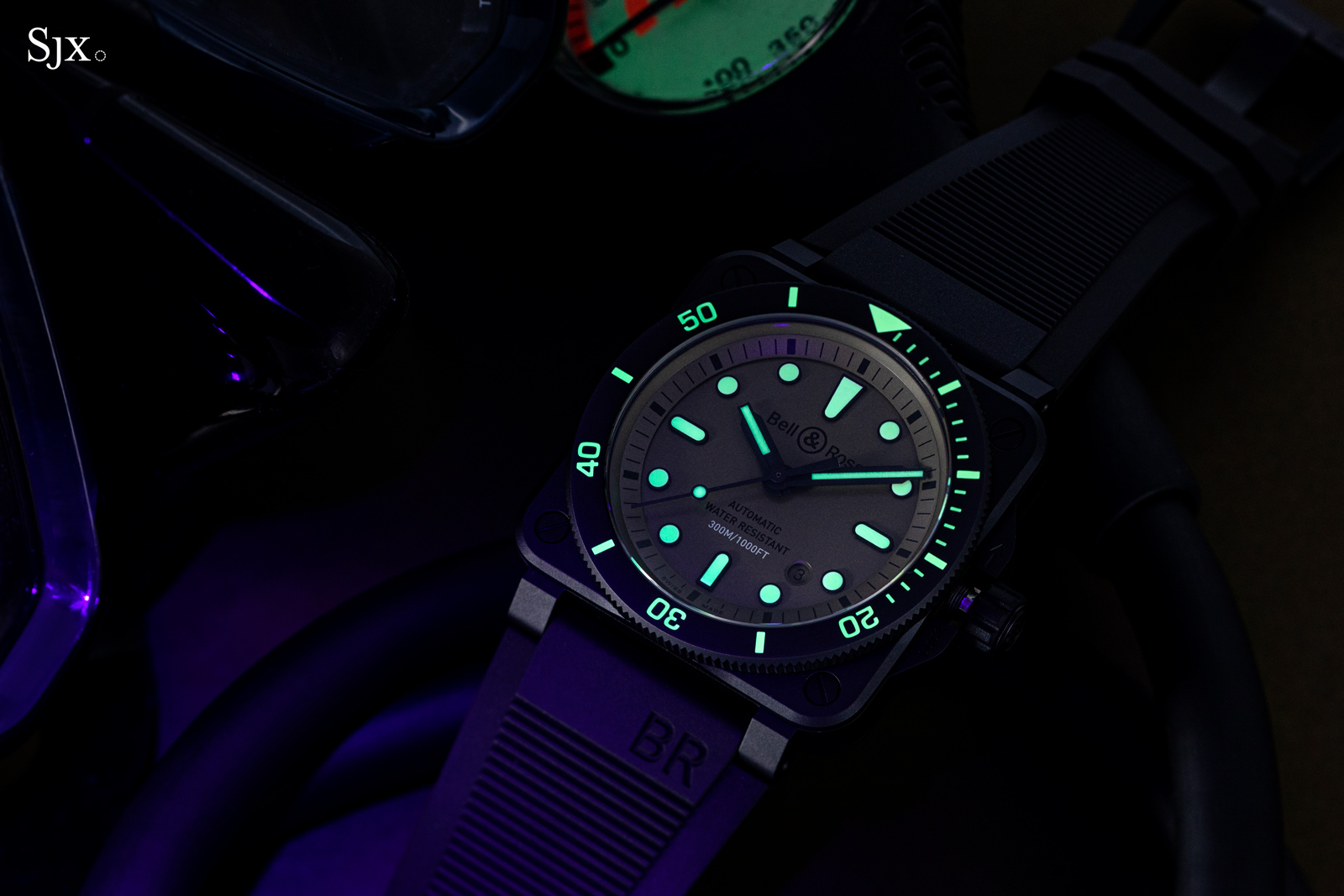 The result is a starkly legible dial – in both day and at night – that reflects the brand’s focus on watches for professionals. The BR 03-92 Diver Military is simply B&R doing what it does best.

Built for the depths

Constructed to meet ISO 6425, the criteria for a diver’s watch laid out by the International Organization for Standardization (ISO), the BR 03-92 Diver Military is a bona fide dive watch in the technical sense.

The BR 03-92 Diver is essentially a bulked up version of the standard BR 03-92, with its 300 m water-resistance accomplish by fortifying the crystal and case back.

Both its sapphire crystal and the case back are substantially thicker than in the standard BR 03-92, though the watch remains relatively slim at under 10 mm. Moreover, the unidirectional bezel of the watch partially hides the thickness of the crystal, thus protecting most of the crystal from chips and damages on its circumference. The thickness of the crystal is partially hidden by the bezel The robustness of the watch is aided by the ceramic case and bezel. Lightweight and highly scratch-resistant, the watch will look pristine even after years of use. That said, while ceramic is scratch resistant, it can chip or crack, so hard knocks or drops should be avoided.

Another feature specific to the diver case are the crown guards, intended to protect the crown from impacts that may cause water to penetrate the case. 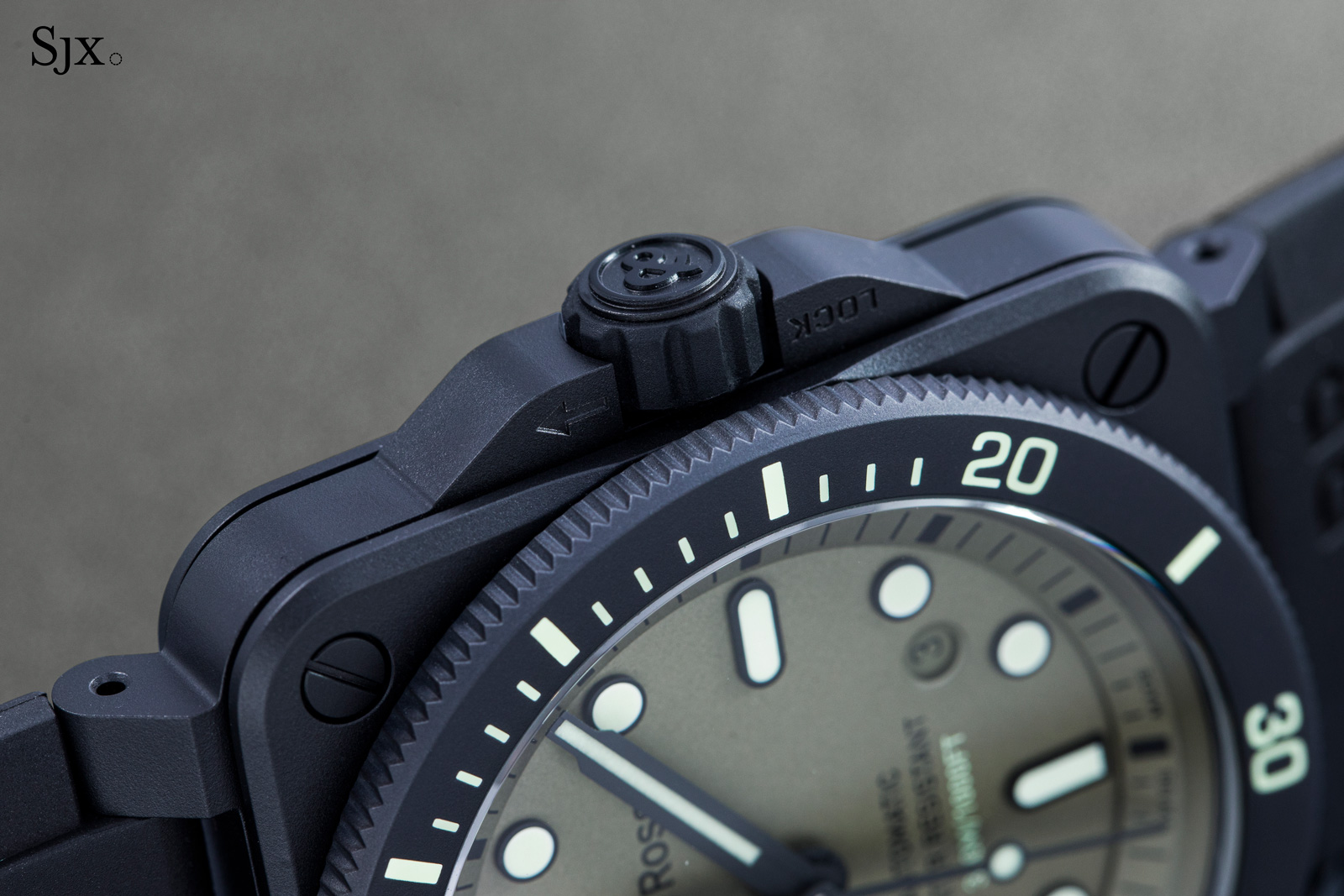 Powering the watch is the BR-CAL.302, which is a Sellita SW300. Essentially a clone of the ETA 2892, the movement is unremarkable but robust, reliable, and quite thin. Its only downside is a short power reserve of 38 hours, which isn’t an inconvenience if the watch is worn daily.

And the movement sits inside a soft-iron cage that protects it from magnetic fields. Magnetism resistance is not crucial in a dive watch, but is a legacy of the aviation-instrument roots of the square case. The soft-iron cage gives the watch a magnetism of around 80,000 A/m, far surpassing the 4800 A/m dictated by the ISO 6425 diver’s watch standard. 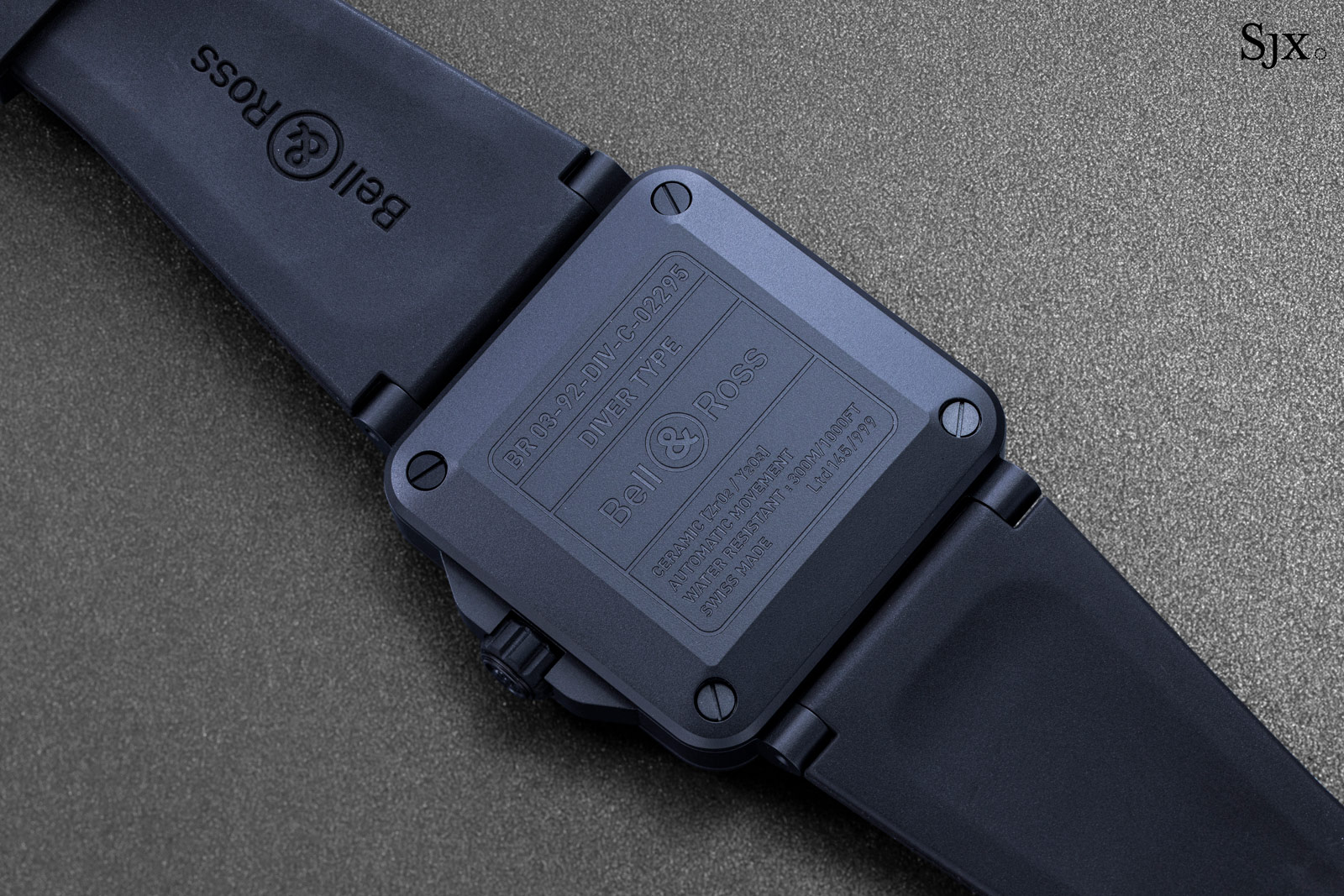 Possessing strong military style along with substance in construction and materials, the BR 03-92 Diver Military exemplifies the spirit of B&R in a compelling package. It’s one of my favourite watches from the brand’s current catalogue, and the best iteration of the BR 03-92 Diver yet. 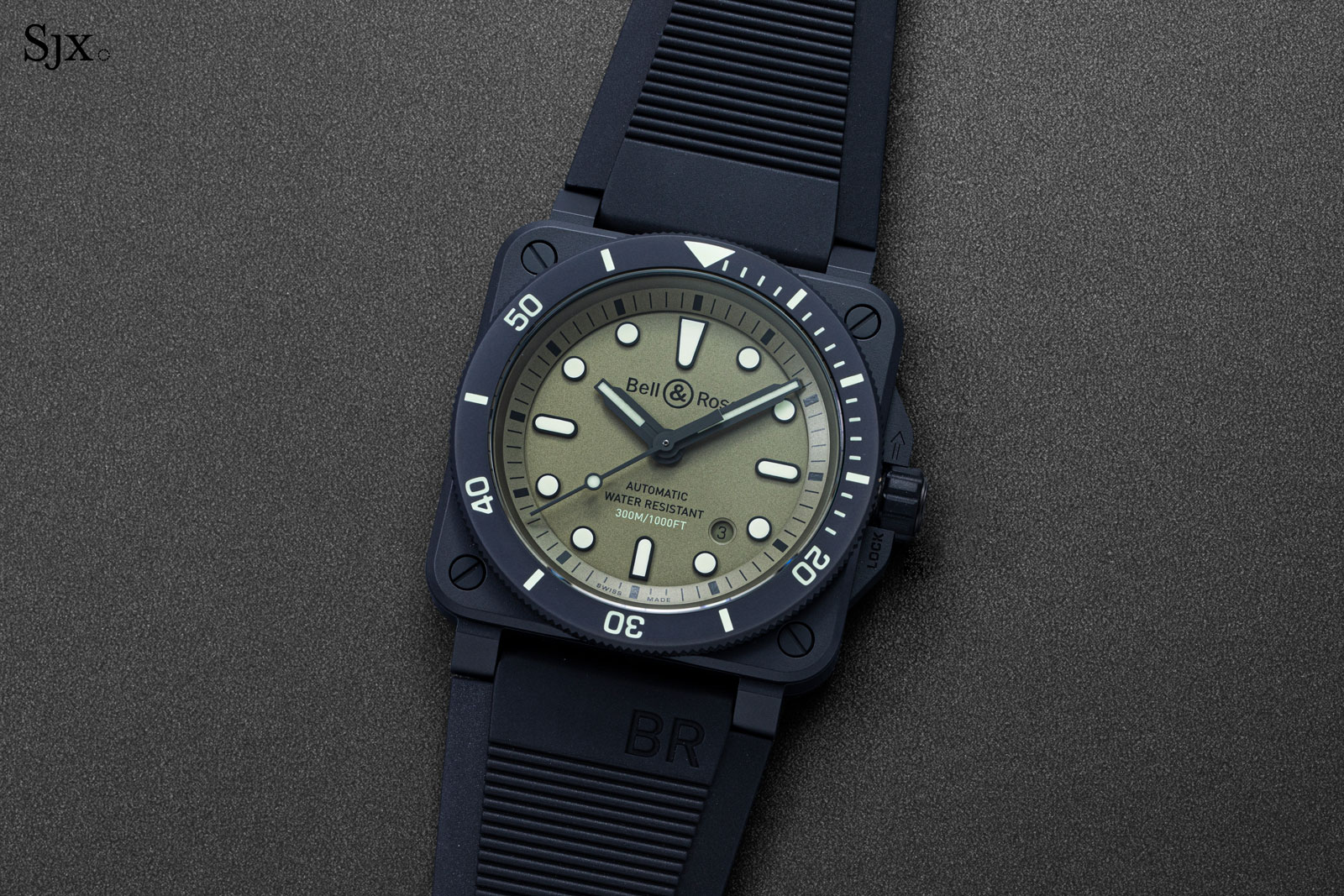 On the surface, US$4,500 seems a steep ask for a watch powered by an off-the-shelf Sellita movement. But it is fair compared to the competition since a dive watch with a ceramic case is fairly uncommon in this price segment. Most alternatives, from the likes of Sinn, Tudor, or Longines, rely on steel or bronze cases at the US$3,500 mark. And the price tag is affordable, particularly since the aesthetics more than makes up for prosaic movement.

The signature B&R wristwatch bulks up for diving.