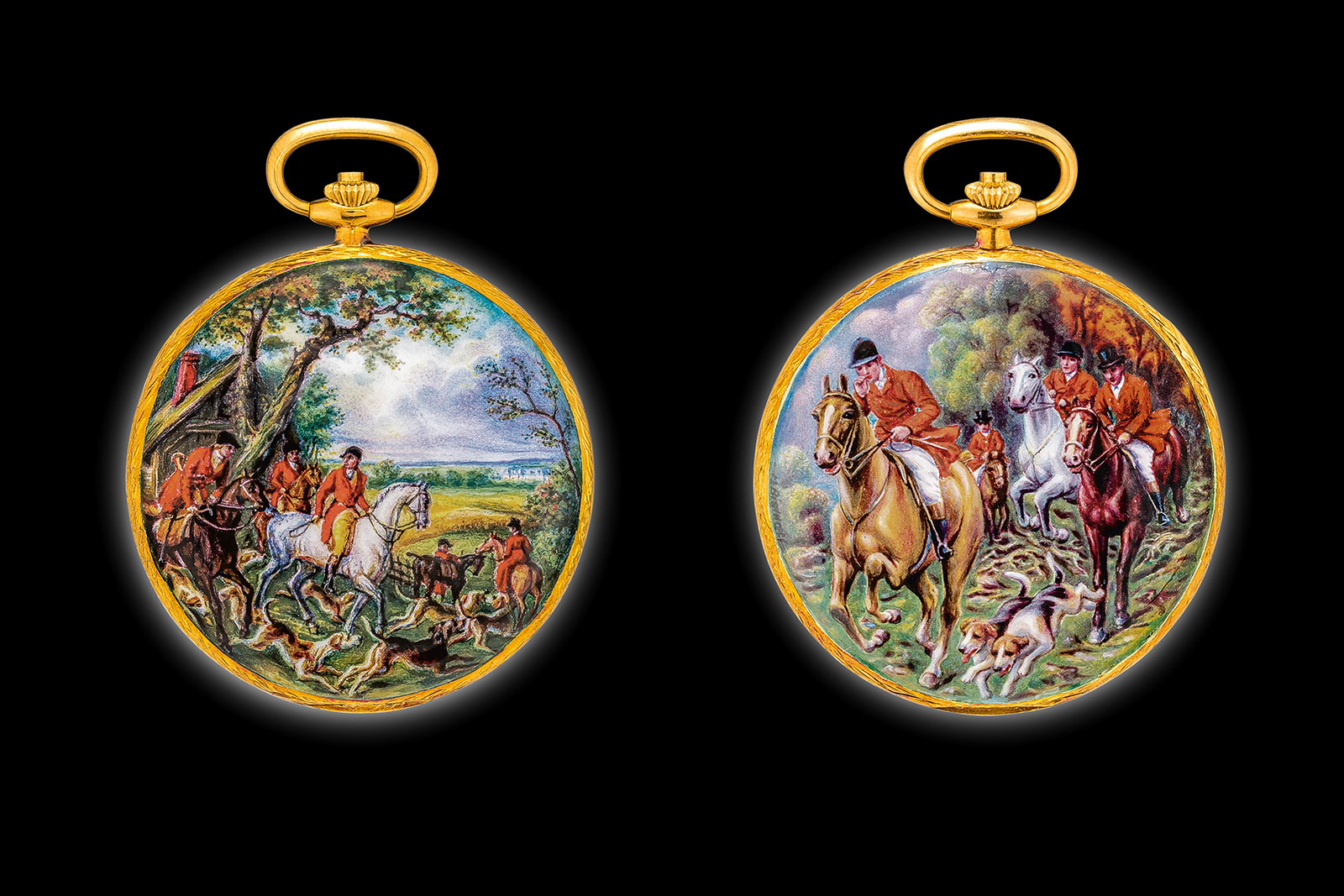 Taking place on Friday, April 23, 2021, Sotheby’s first live watch auction of the year takes place in Hong Kong. Important Watches is a full-sized sale led by the unique Rolex “Zenith” Daytona in platinum with a turquoise “Stella” dial, which might just set the record for most valuable automatic Daytona ever sold at auction.

But the 296-lot sale is diverse in the traditional manner of Hong Kong auctions, encompassing vintage Patek Philippe, modern grand complications, and an assortment of independent watchmaking. 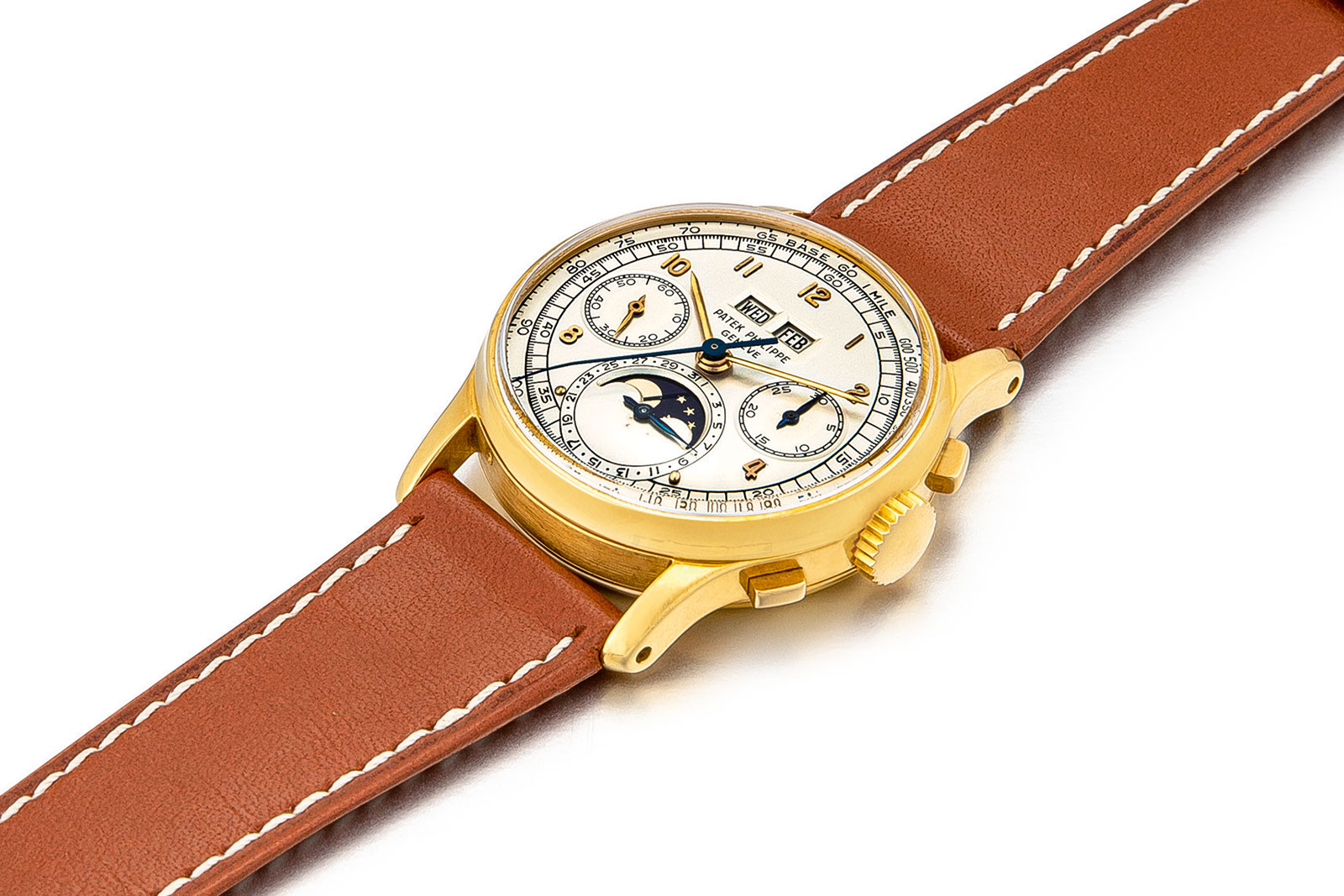 Here’s a roundup of a few noteworthy lots at the auction, including a Patek Philippe ref. 1518 in exceptional condition, a pair of gorgeous pocket watches decorated with the very best of Geneva miniature enamelling, and the F.P Journe Coffret 38 made up of five watches with steel cases.

The auction will start at 11 am local time on April 23 at the Hong Kong Convention & Exhibition Centre, while the catalogue and online bidding are available on Sothebys.com.

The middle decades of the 20th century were a golden age for miniature enamelling in Geneva, with the cities best watchmakers recruiting its best enamellers to decorate pocket watches.

One example of such work is lot 2185, a yellow gold pocket watch made in 1948 by Vacheron Constantin that bears a miniature enamel painting by Hélène May Mercier (1910-1996), an artisan who learnt the craft with another famed enameller, Carlo Poluzzi (1899-1978). 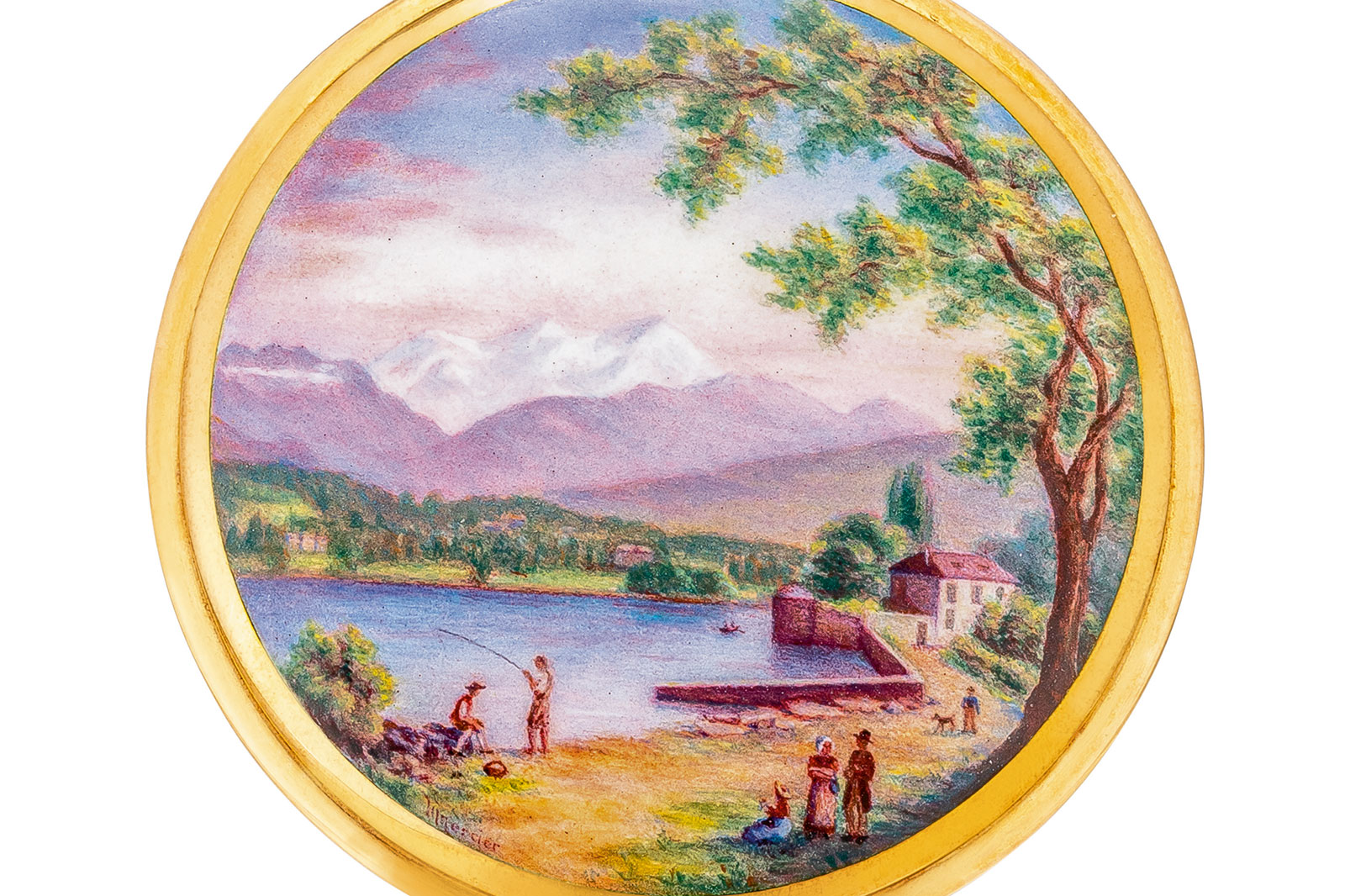 Executed in an Impressionist style, the miniature depicts Lake Geneva, or lac Léman, with the Mont Blanc in the distance, sometime during the late 19th or early 20th century. Very much an idyllic scene that captures the idealised days of yore, the enamel is fine, detailed, and still vibrant after the decades. 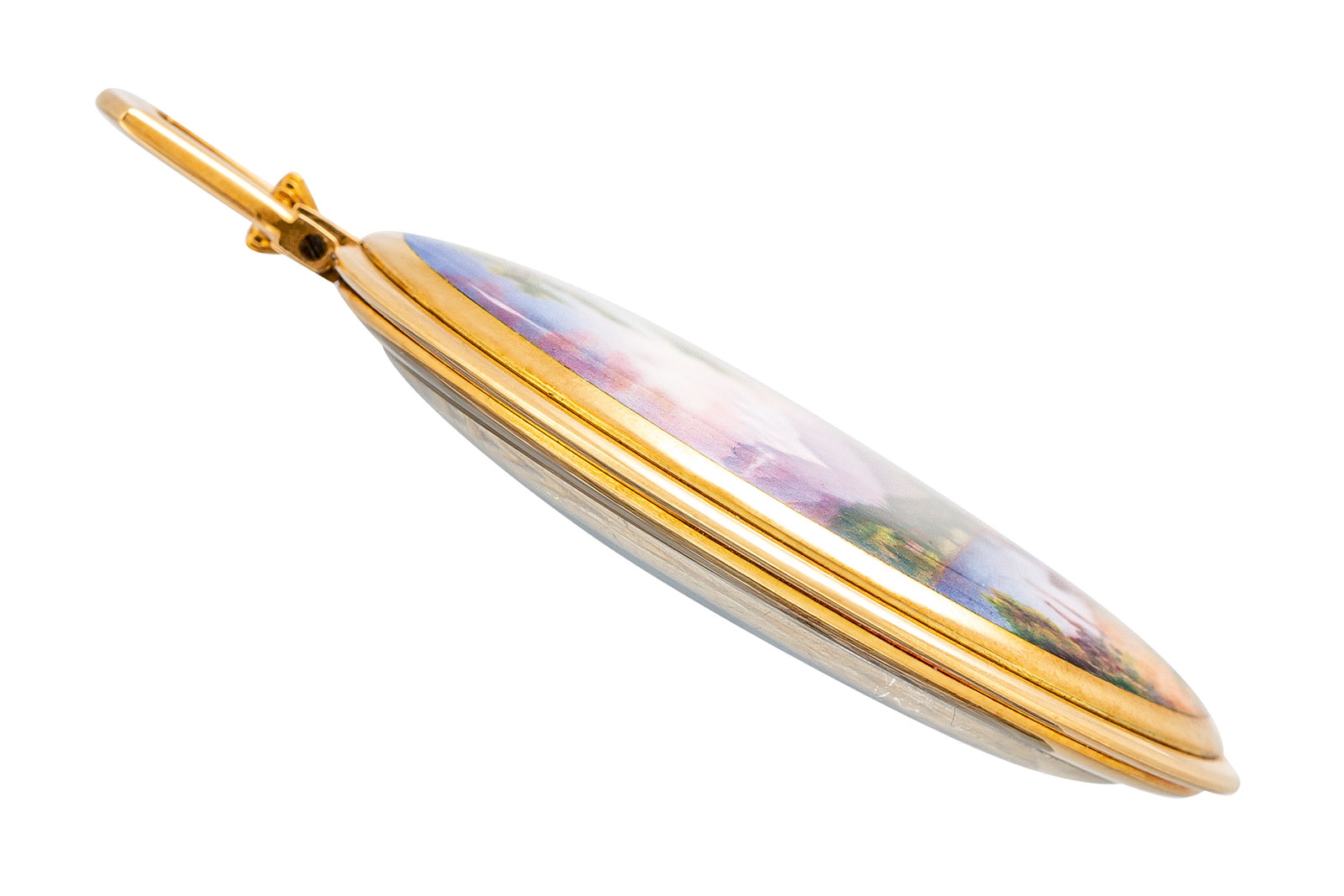 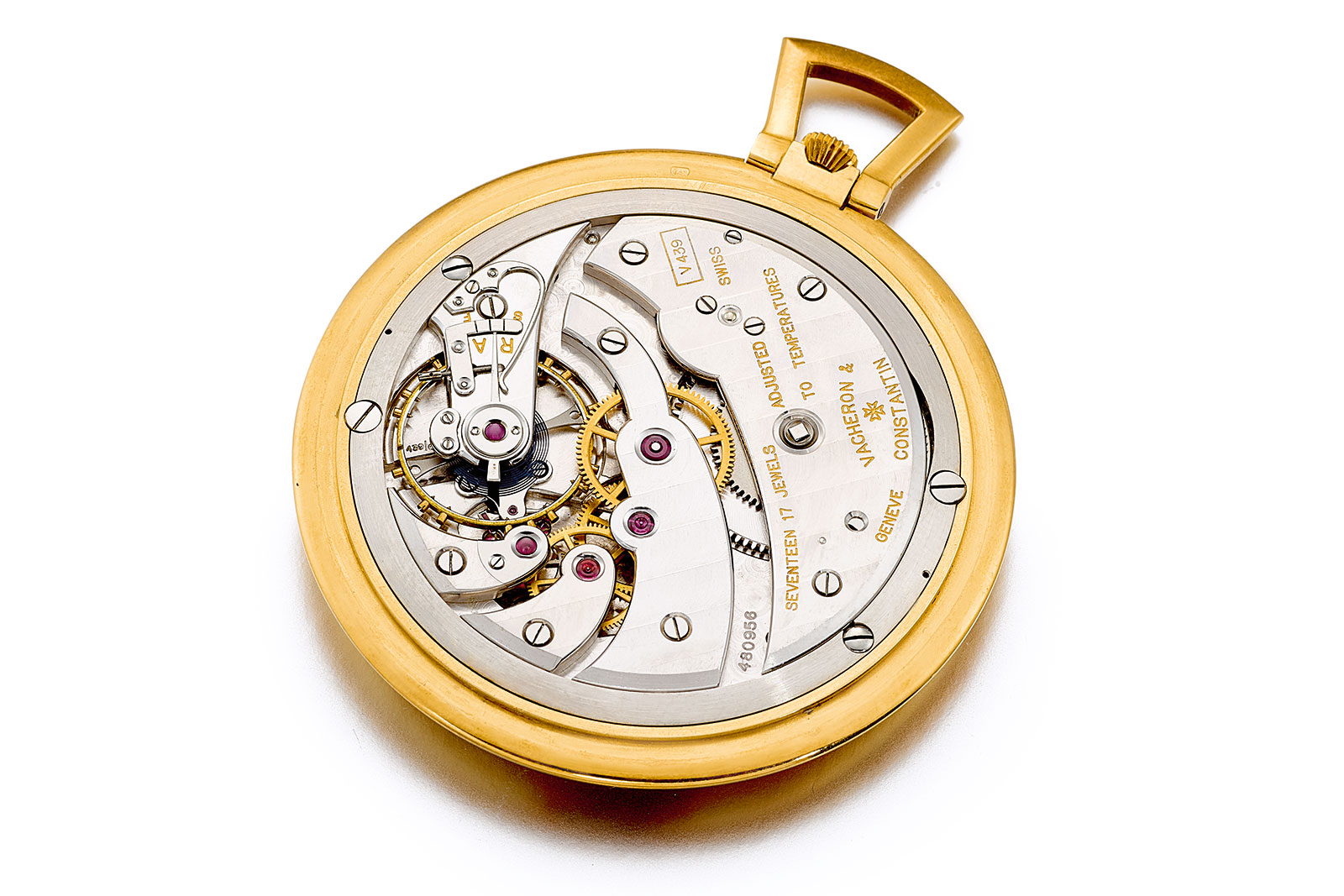 On the front, the watch is discreetly simple, with a classical dial that’s reminiscent of the brand’s modern-day Patrimony. 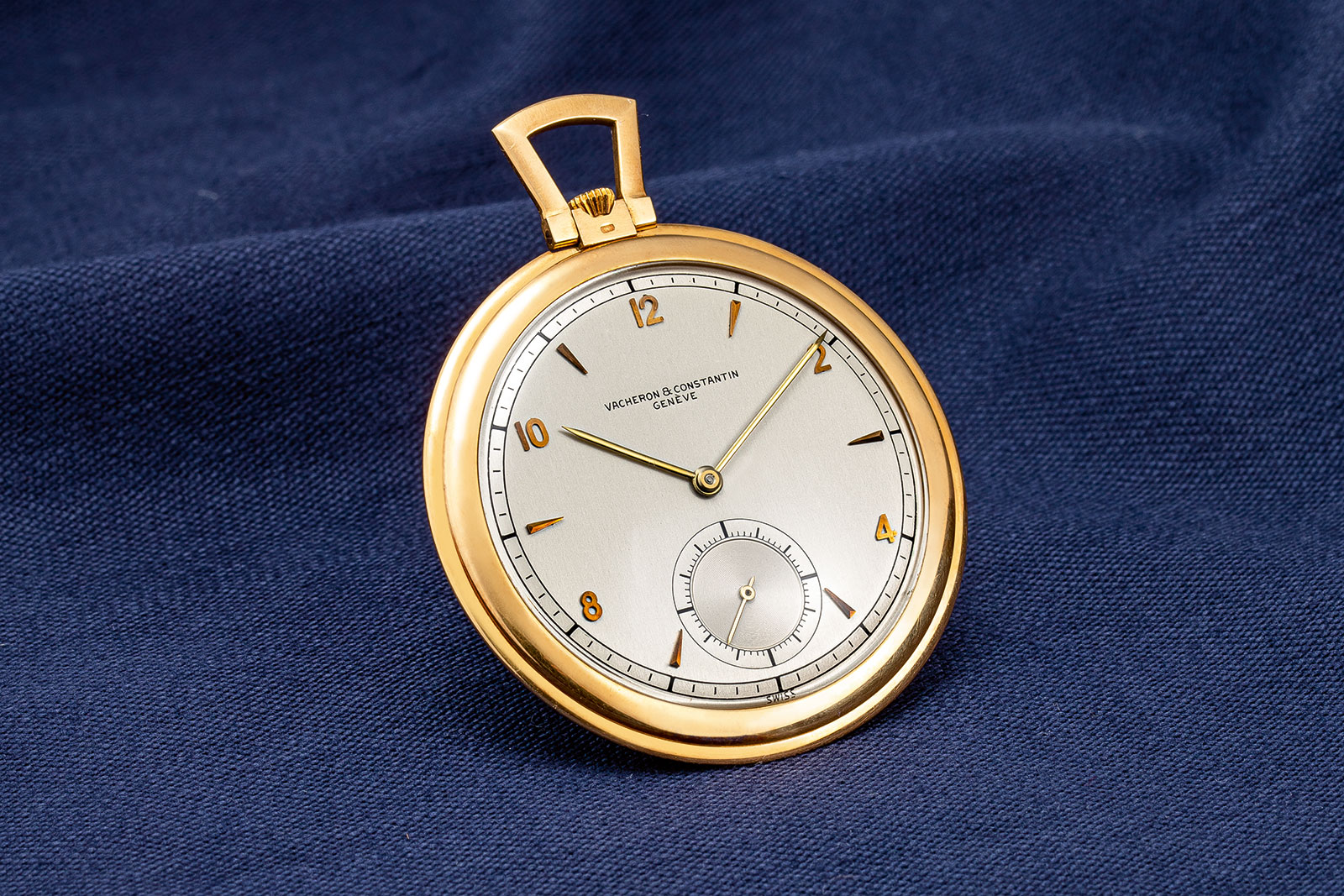 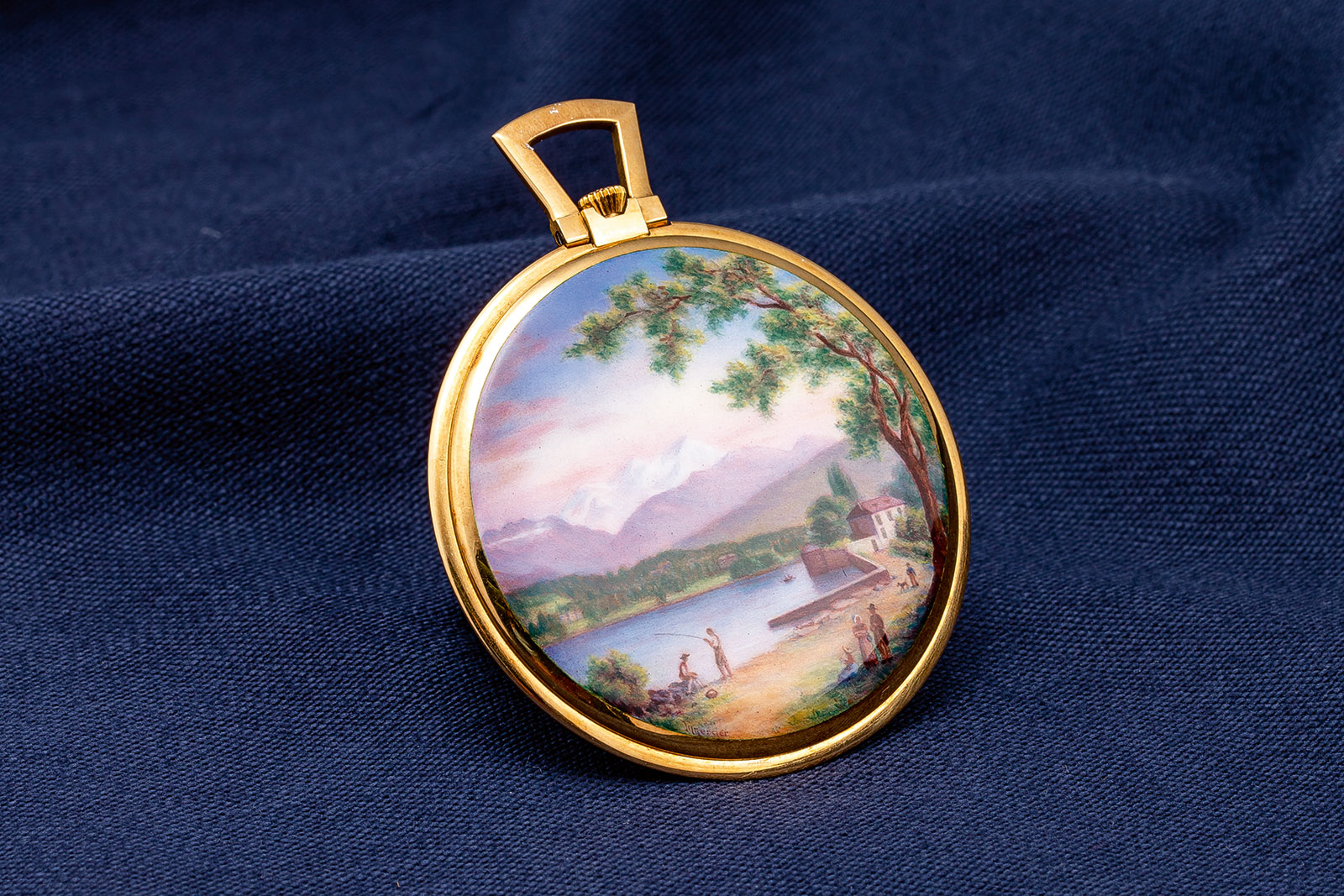 An even more exceptional example of miniature enamelling – if for no other reason than having twice the painting – lot 2186 is a yellow gold hunter-case watch with miniature enamel on both sides.

One of only three known double-sided enamel pocket watches by Patek Philippe – another is in the company’s museum – the watch is decorated with the work of Marthe Bischoff (1900-1991), an enameller who worked for Patek Philippe but whose creations are less frequently encountered than that of the more famous Suzanne Rohr. 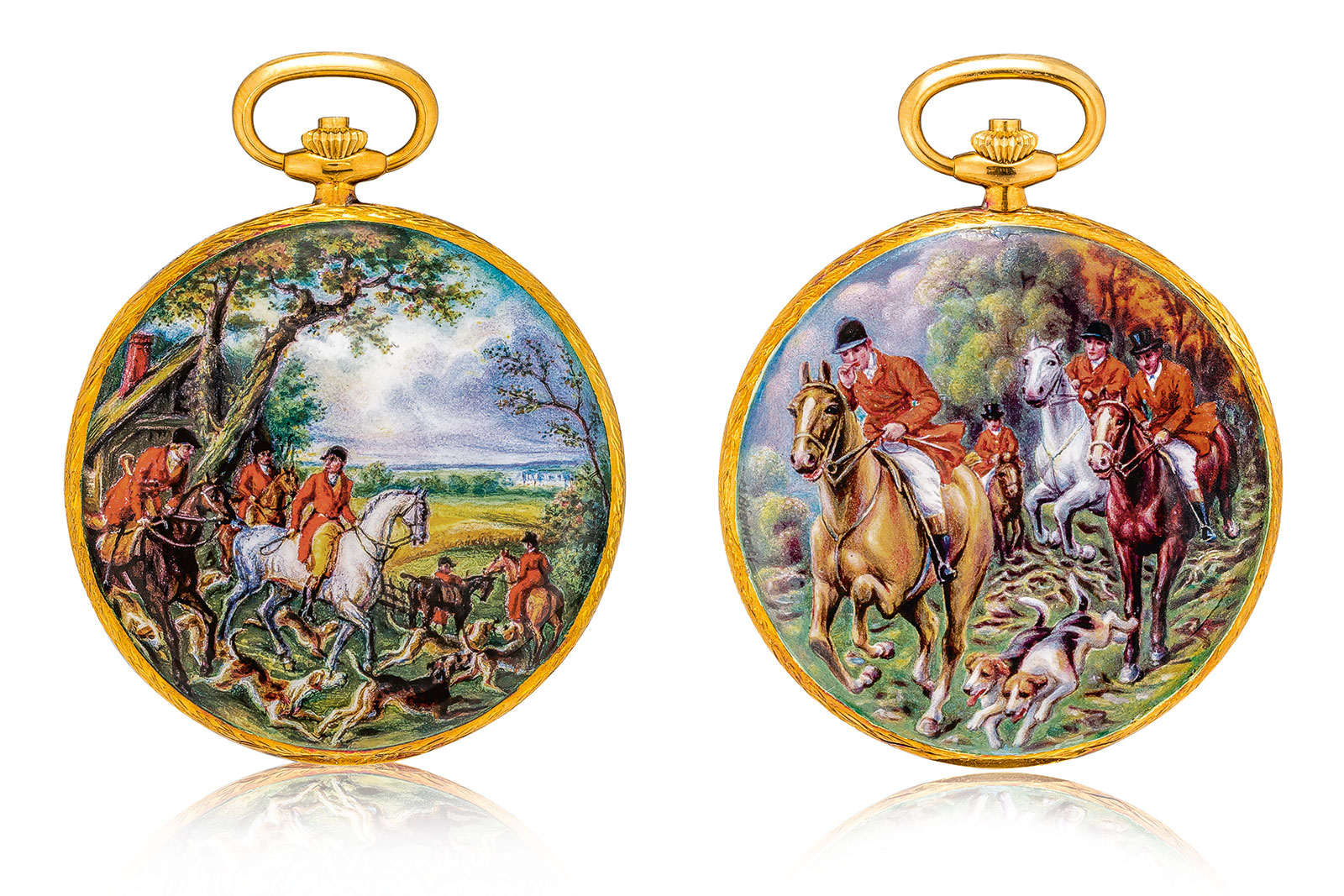 According to the literature that accompanies the watch the enamelling on the front was started in 1969 and completed a year later, but the scene on the back was only finished in 1975, by which time Bischoff was 75 years old.

The scene on the front reproduces a section of Chasse dans le parc de Fontainebleau (or “Hunting in the park of Fontainebleau”) by French painter Carle Vernet, while the back is another scene inspired by the painting. The intricacy of the enamelling is remarkable, with even the smallest details, such as the spotted fur of the hunting dogs, rendered in remarkable liveliness. 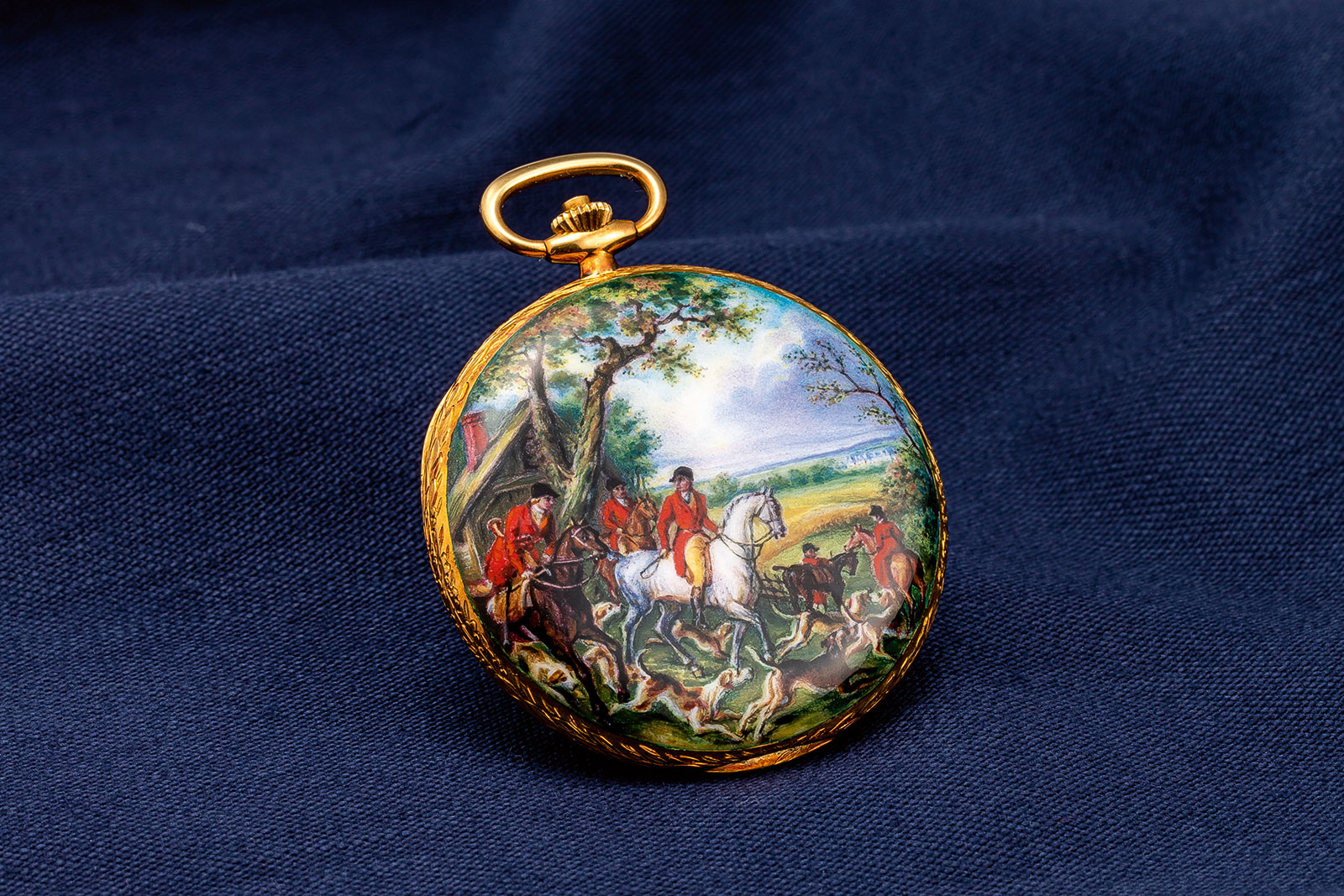 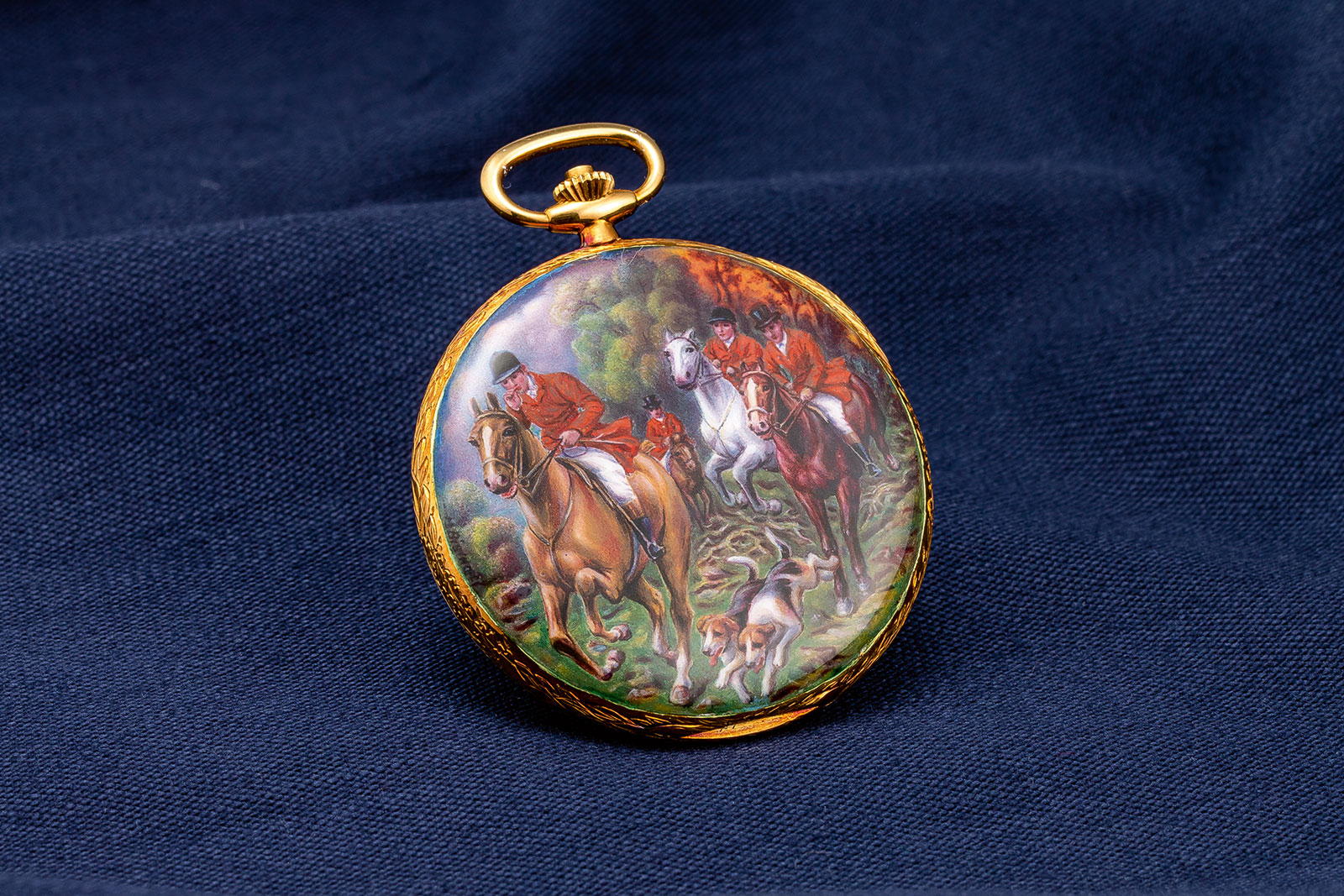 In contrast to the elaborately enamelled case, the dial is a clean white with painted roman indices, while the movement is the cal. 17-140. 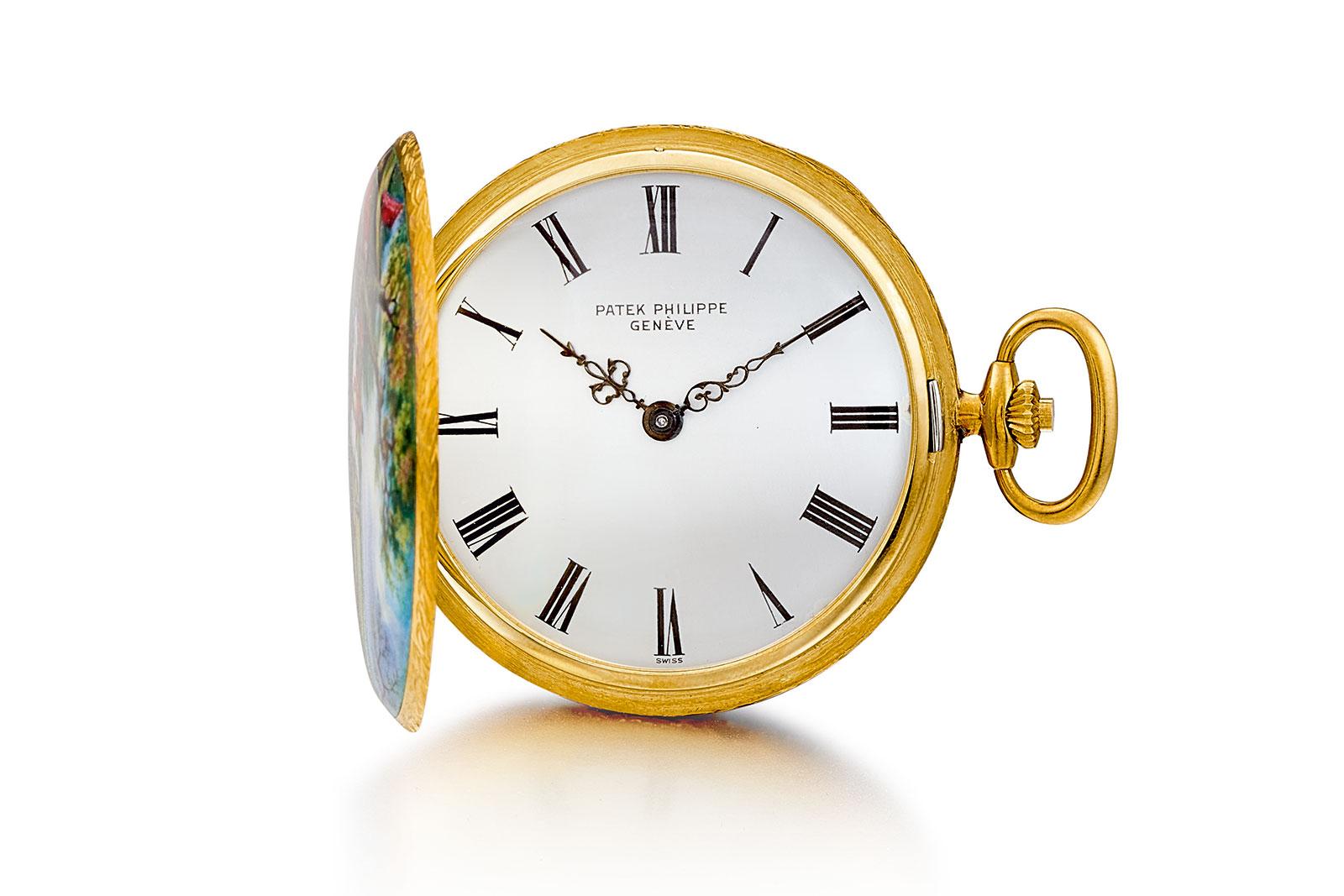 Notably, the watch is accompanied by everything that came along when it was purchased in 1976 by the original owner. That means the box, certificate, correspondence detailing the selection of artwork to be reproduced, as well as the original invoice from Gübelin for CHF36,000. F.P. Journe is having a moment now, being one of the hottest independent watchmakers. The six lots from lot 2212 comprise an entire F.P. Journe Coffret 38 – numbered “36/38” – the five-piece set the brand produced in 2015 to mark the discontinuation of the 38 mm case size (with 40 mm and 42 mm cases now the standard offering).

All five watches feature steel cases and solid gold dials in a mustard colour that recalls the brand’s very first watches – we covered the set in detail at its debut. They are being sold individually at the auction, along with the presentation box that is the sixth lot. 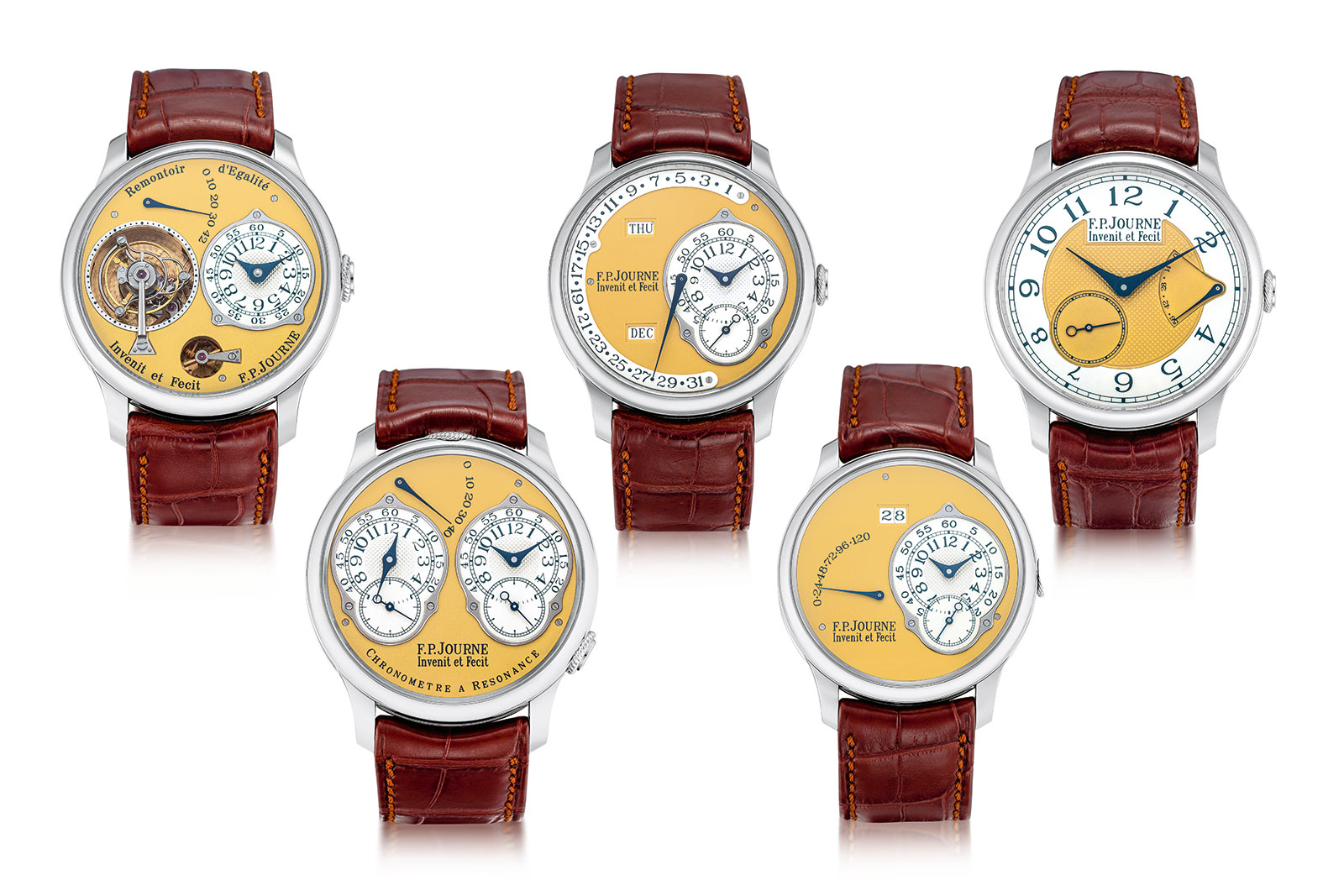 The creme de la creme is doubtlessly lot 2212, the Tourbillon Souverain, which is essentially a remake of the original Tourbillon Remontoir d’Egalité of 1999 (our in-depth article on that watch can be foundhere). But unlike the original that had a brass movement, as all early F.P. Journe watches did, the Coffret 38 tourbillon has the same movement but with its bridges and base plate in red gold, making it truly unique. 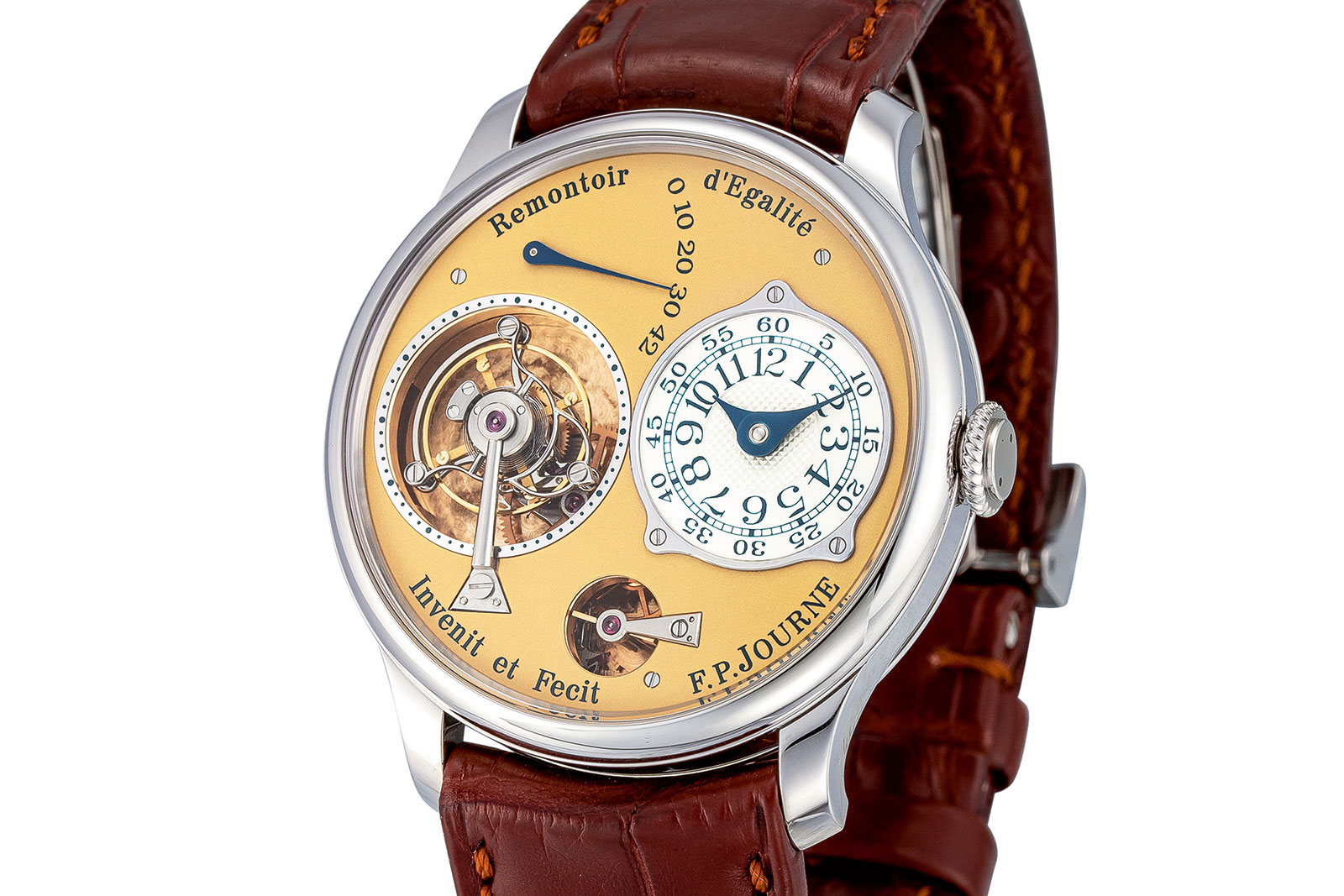 The tourbillon has an estimate of HK$1.6-2.4m, or about US$200,000-300,000. The high estimate is almost the retail price price of the entire set in 2015, illustrating the extreme desirability of F.P. Journe at the moment. Full lot details here. 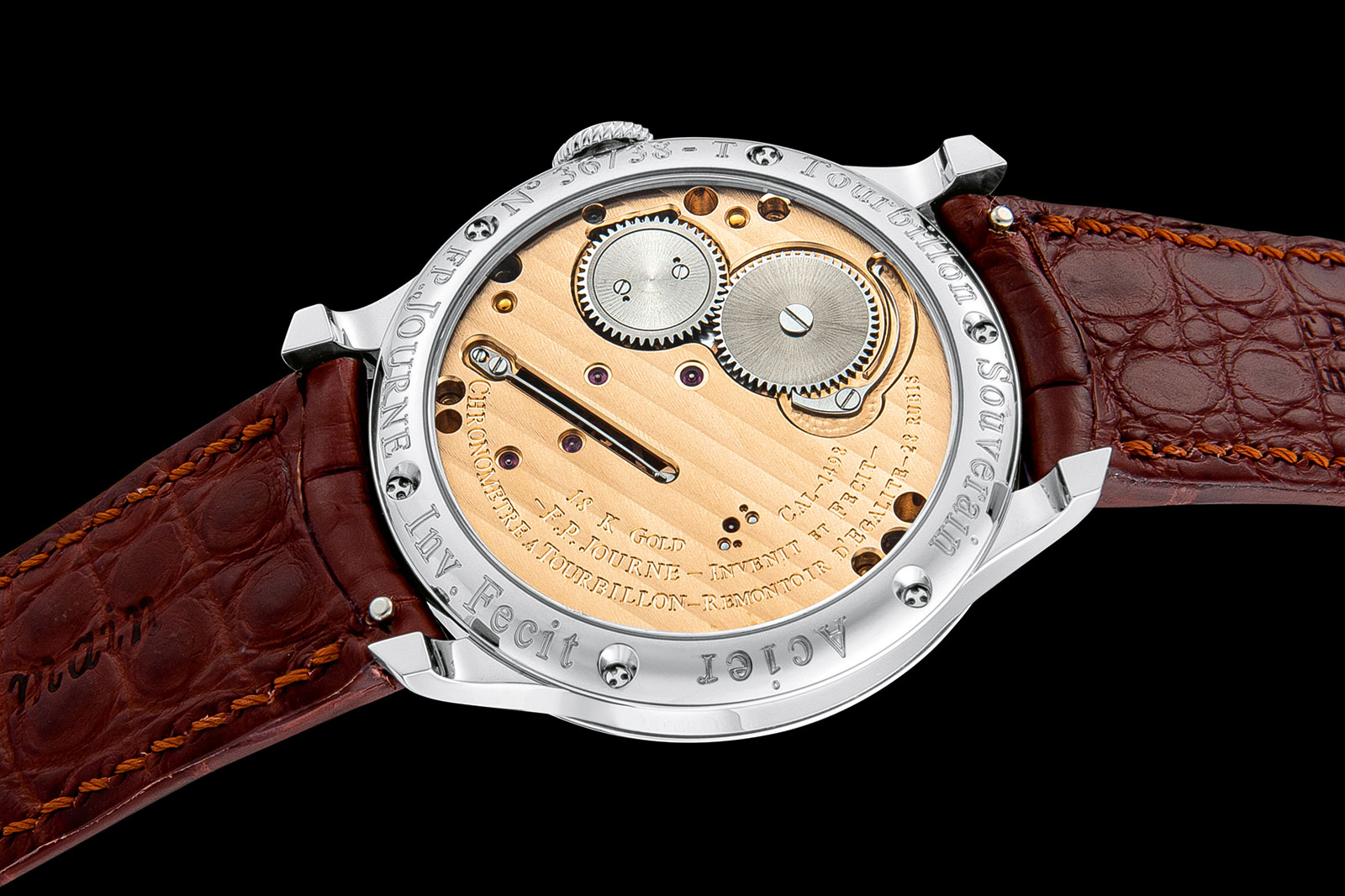 The tourbillon movement with its gold bridges and base plate

The next lot is 2213, the Chronomètre à Résonance. Similarly based on first iteration of the Resonance from 2000, the watch has the symmetrical dial of the original, instead of the asymmetrical dials of later iterations. And unlike the latest, 2020 model, this retains the original movement, giving it a 12 o’clock crown for time setting and winding, along with a crown at four o’clock to reset the seconds. 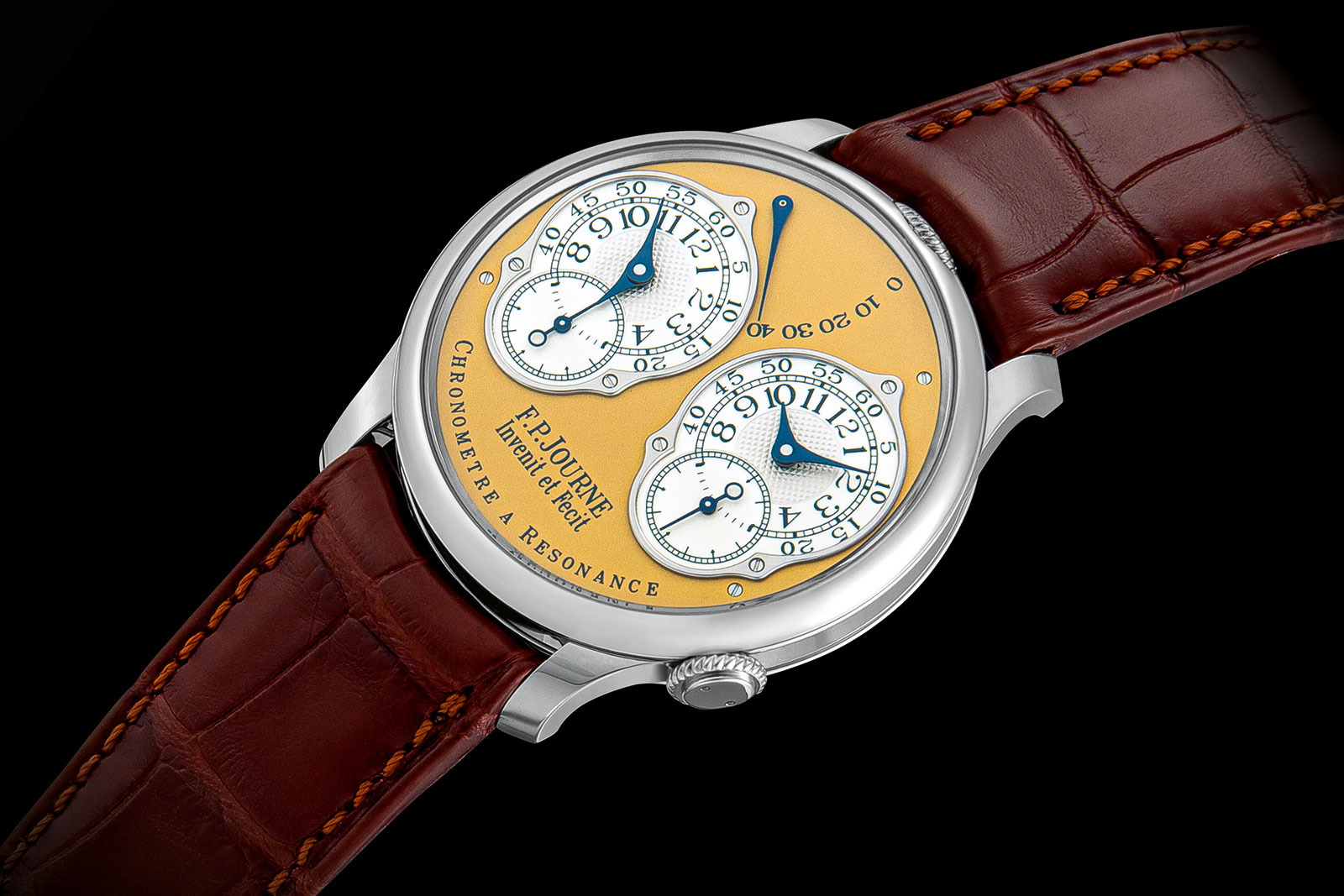 The subsequent lots are far more affordable, making them a more accessible way of getting into stainless-steel set. Despite having a lower retail price (and being less complicated) than the Octa Calendrier and Réserve de Marche, the Chronomètre Souverain has an identical estimate of HK$600,000-800,000, or about US$77,000-103,000, making the preceding two better value in comparison. Full lot details here. 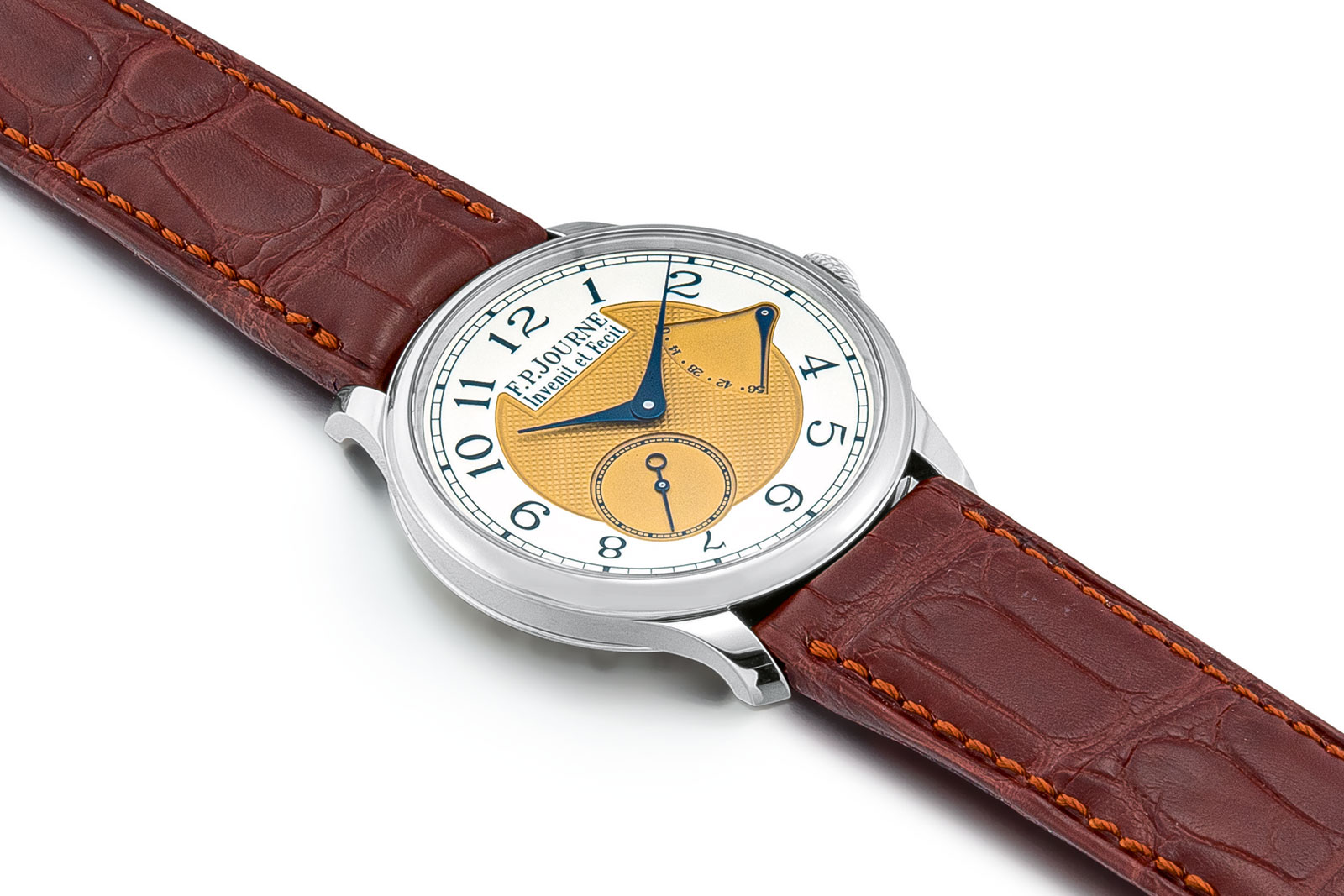 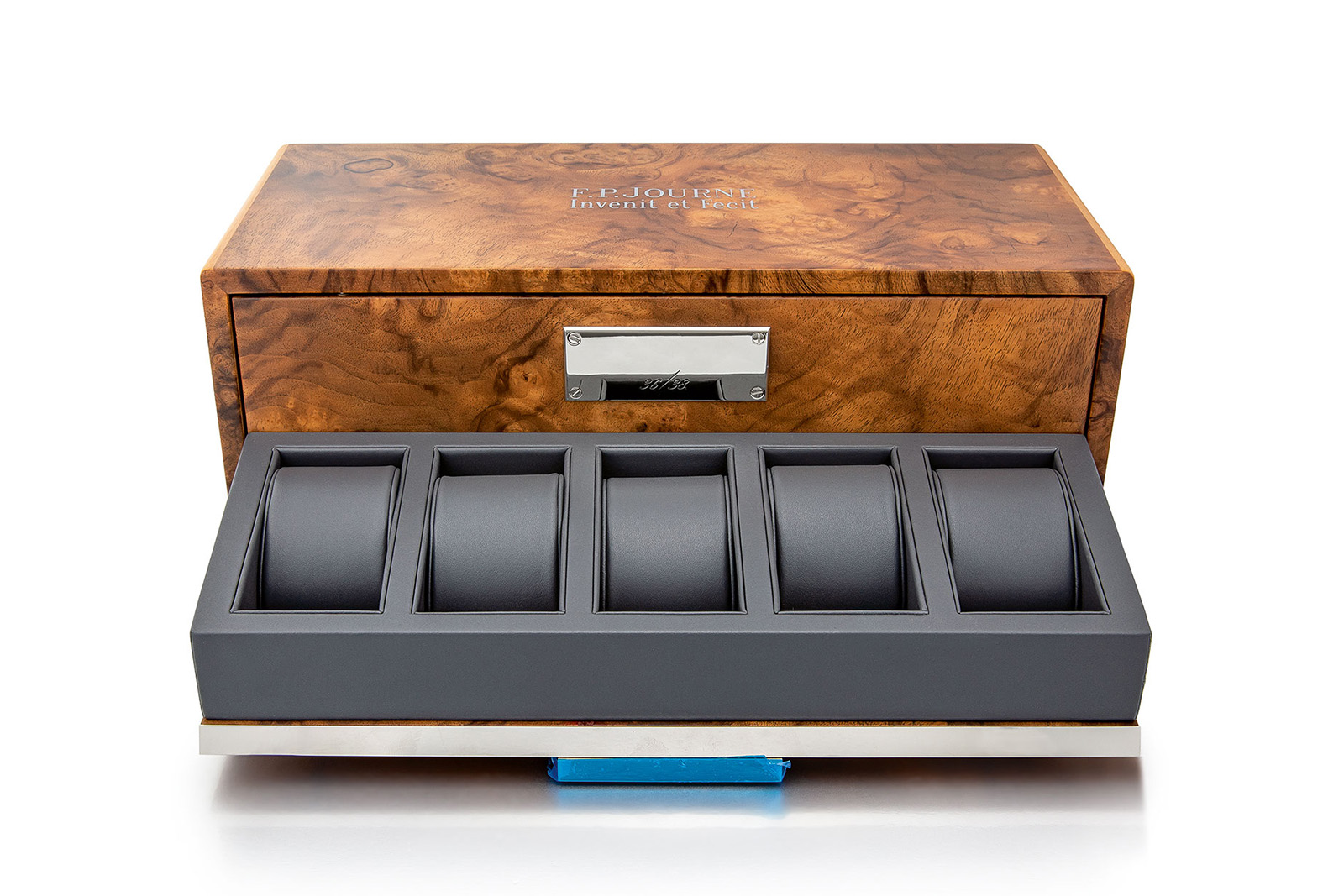 One of the top lots of the sale, lot 2263 is a Patek Philippe ref. 1518 in yellow gold. The first wristwatch chronograph with perpetual calendar made by Patek Philippe (or any brand for that matter), the ref. 1518 is desirable in itself.

First introduced in 1941, the ref. 1518 is powered by the 13-130 Q, that was based on the Valjoux 23 but heavily improved by Patek Philippe. Most were made with cases in yellow gold, a minority in rose gold, and just four in stainless steel (which is why one sold for US$11 million in 2016). Though this is an example of the most common variant of the ref. 1518, it is preserved in uncommon condition. The case and dial are original, showing only minor signs of wear. 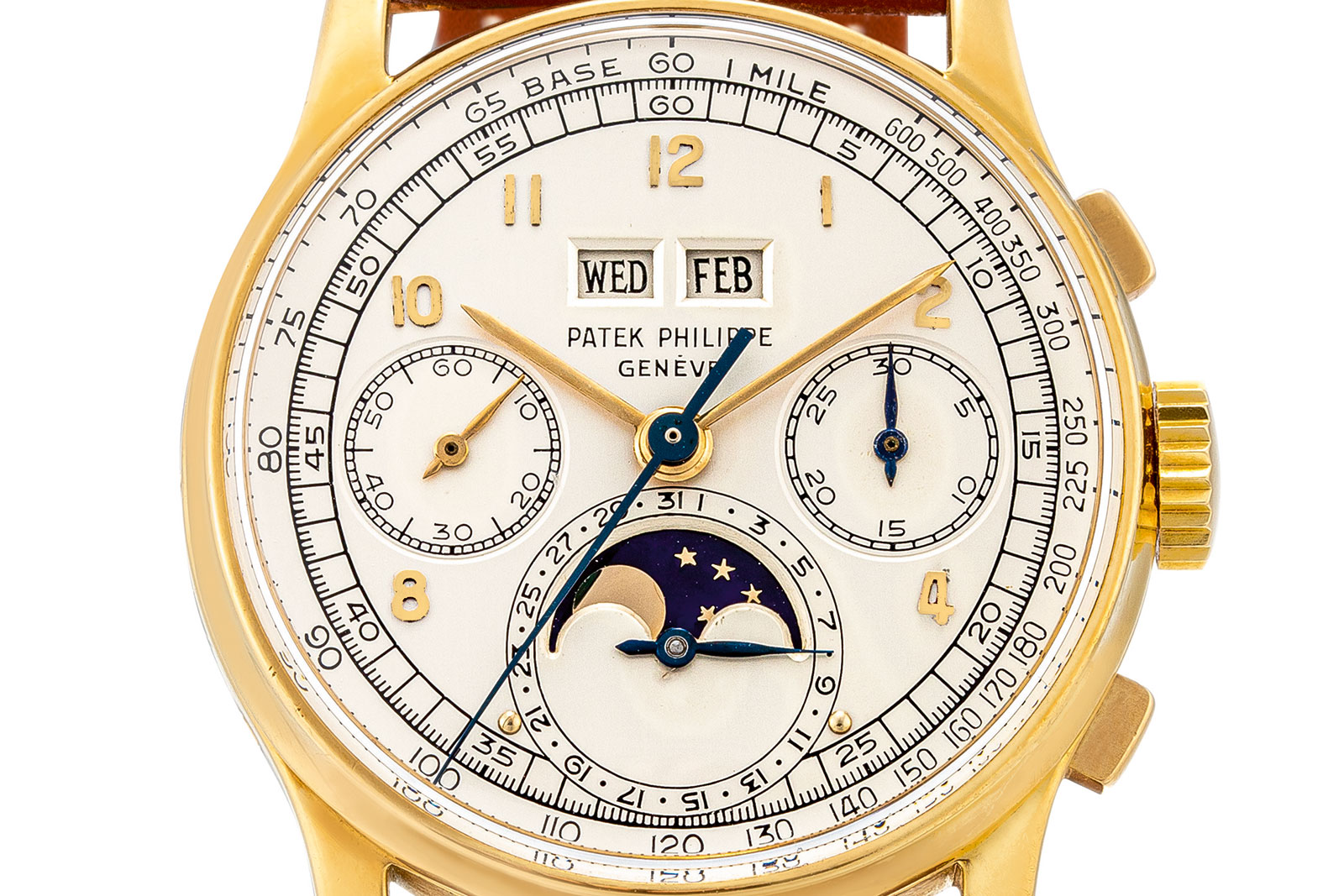 The dial exhibits pinpoint marks on the minute counter near the hand, along with oxidisation arounds the edges of the aperture for the moon phase. The gold hallmarks remain deep and obvious, and according to Sotheby’s, the case most likely retains its original factory finish. 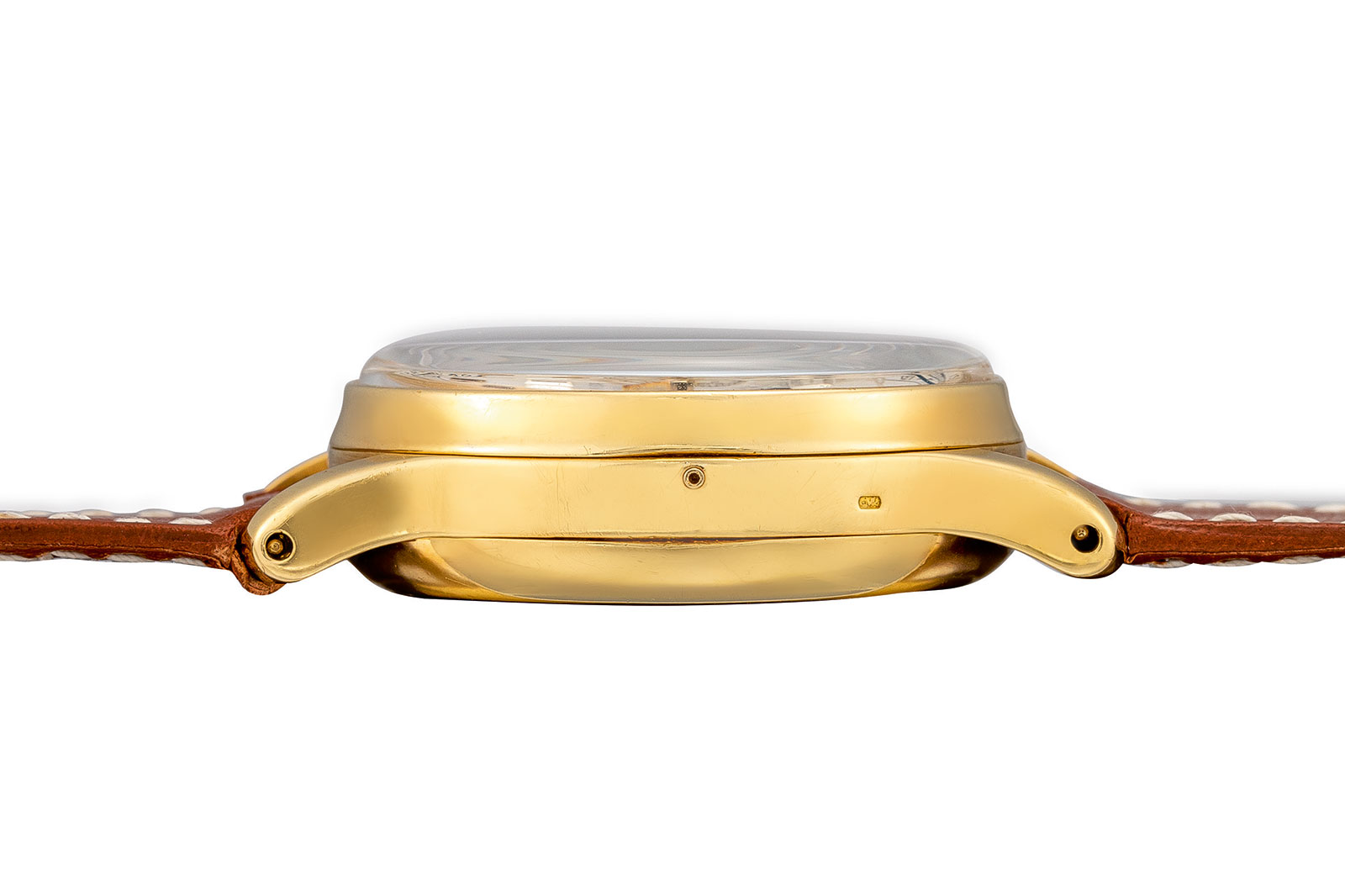 For the full catalogue, as well as appointments and online bidding, visit Sothebys.com.

This was brought to you in partnership with Sotheby’s.