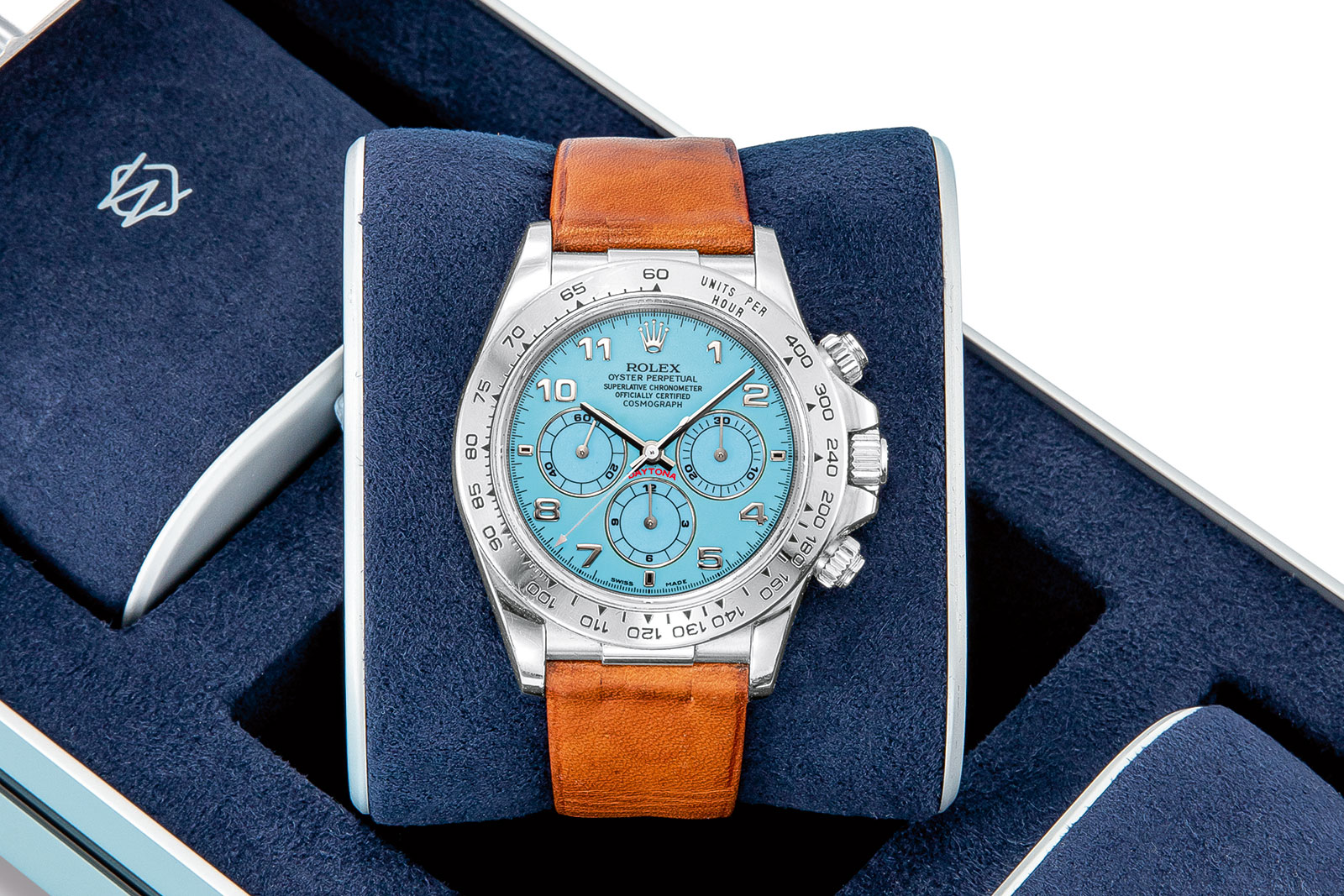 Having sold the first publicly-known Daytona “Zenith” in platinum, Sotheby’s is going to offer yet another. Once again a unique example, the Cosmograph Daytona ref. 16516 in platinum – and a blue-lacquer “Stella” dial – will go under the hammer at Sotheby’s Hong Kong watch auction in April 2021.

“Sothebys is delighted to present this automatic Zenith Daytona rendered in platinum with a ‘Tiffany blue’ lacquered ‘Stella’ dial in April,” says Sam Hines, Sotheby’s head of watches, who adds, “Manufactured in 1998, this previously unknown watch comes from the same collection as the record-breaking platinum Daytona with hardstone lapis lazuli dial sold by Sotheby’s last year.” 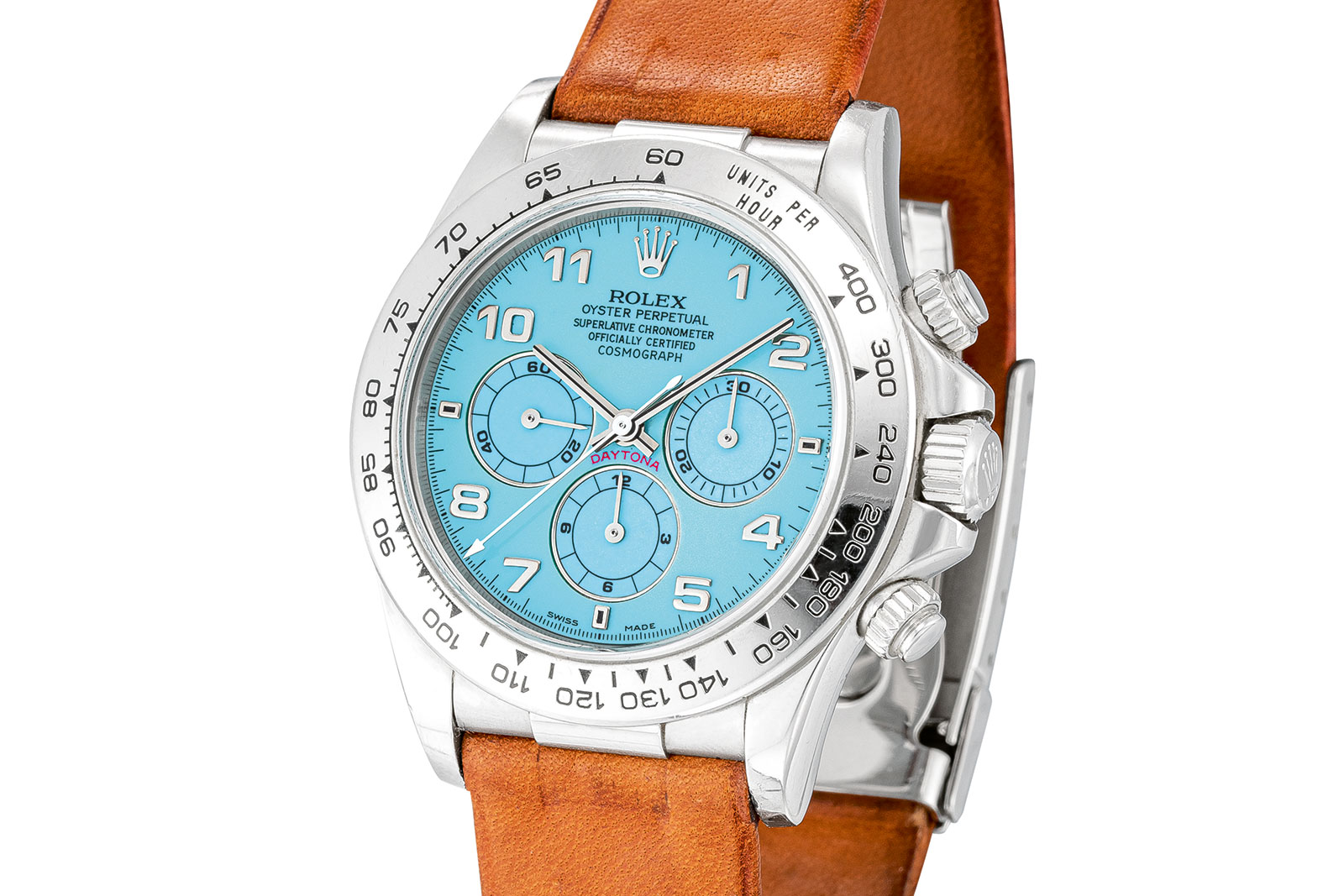 According to Sotheby’s, only five platinum Daytonas with the Zenith El Primero movement were made in the late 1990s, at the request of Rolex’s then chief executive Patrick Heiniger. Each example was unique in having a different dial, but all were equipped wit the same cal. 4030 derived from the Zenith El Primero, which was phased out in favour of the in-house cal. 4130 in 2000.

The late Heiniger kept one for himself, and gifted the remainder to key business partners of Rolex. Sotheby’s has since sold two of the five, each achieving a record price for an automatic Daytona.

The first was a wedding present to a member of the Gobbi family that owns the eponymous watch retailer in Milan. It had a black mother-of-pearl dial, and sold for a then record US$871,000 in 2018. That record was quickly topped by the second known example, which was fitted with a lapis lazuli stone dial, sold in summer last year for US$3.27 million. 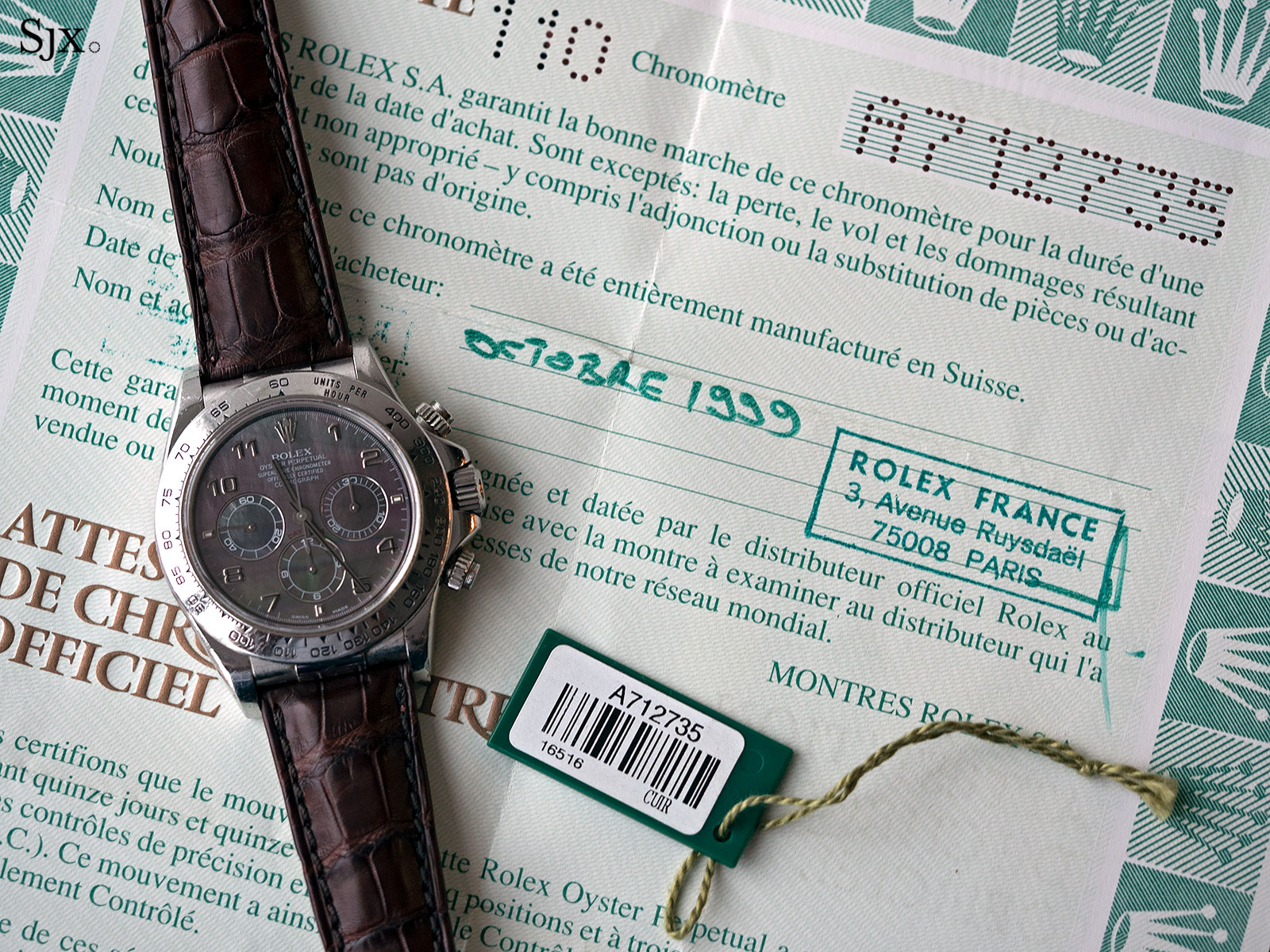 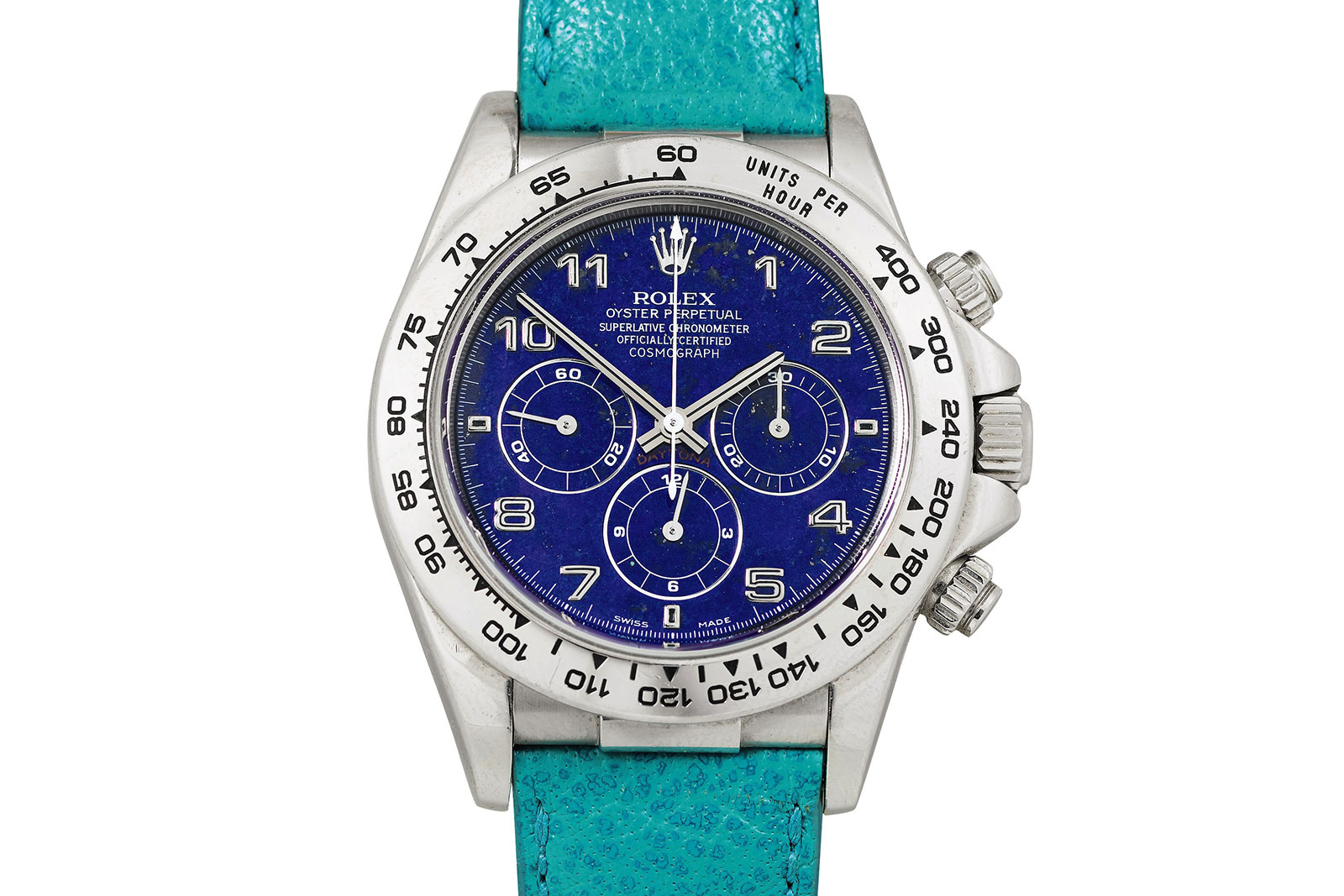 The second example in platinum, which has a lapis dial and sold last year

The third example is like the others in that it has an A-series case number – A171133 – and an inscription on the case back, this one for 1998. The lapis example from last year was also engraved with a 1998 dedication, while the mother-of-pearl specimen sold in 2019 was marked 1999. But unlike the other two that had dials made of natural materials, this has a glossy, lacquered “Stella” dial in baby blue. 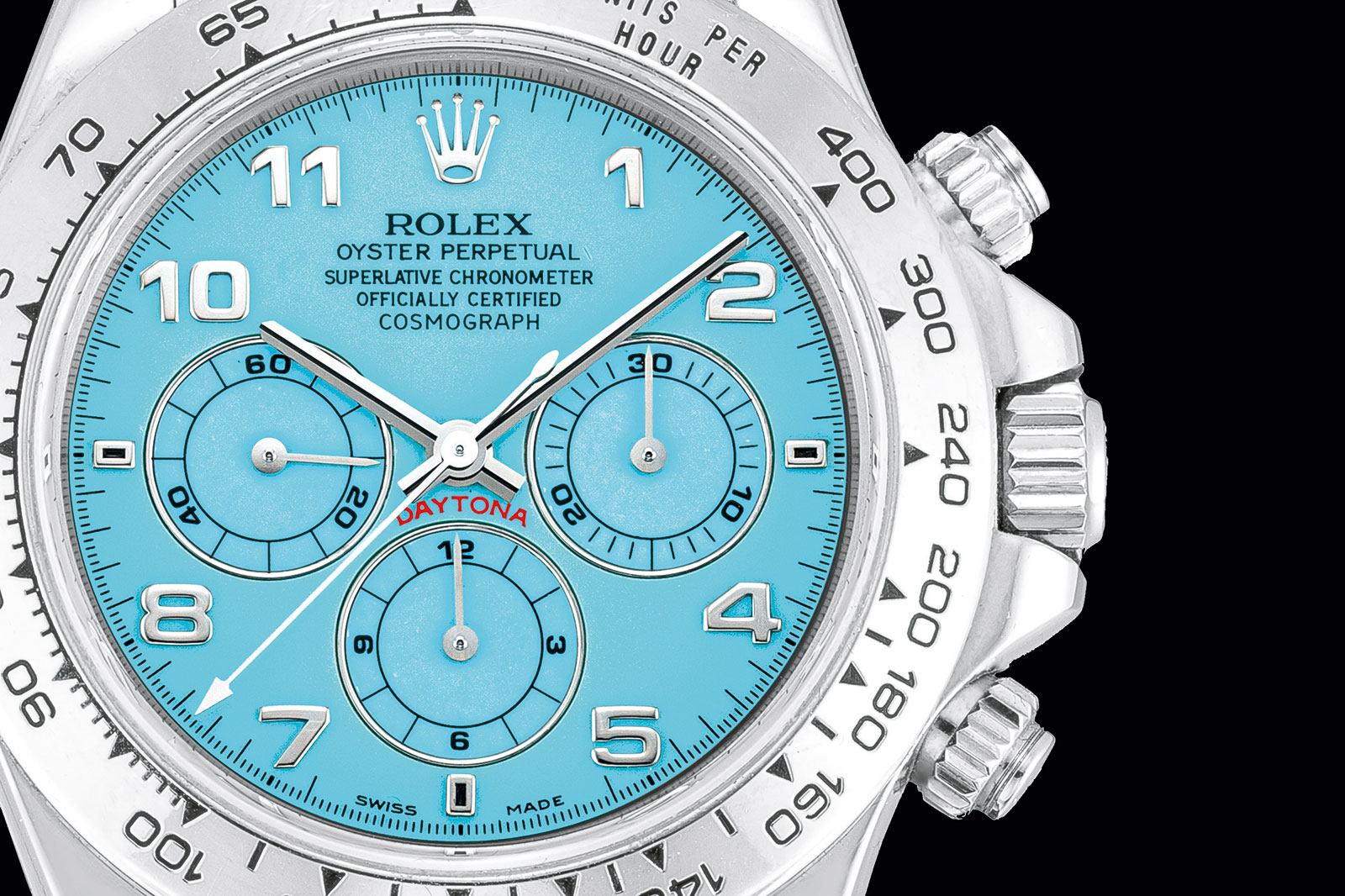 The auction preview will happen April 17- 21, while the auction itself will take place on April 23, 2021 at the Sotheby’s sale room in Hong Kong located at Pacific Place. For more, visit Sothebys.com.