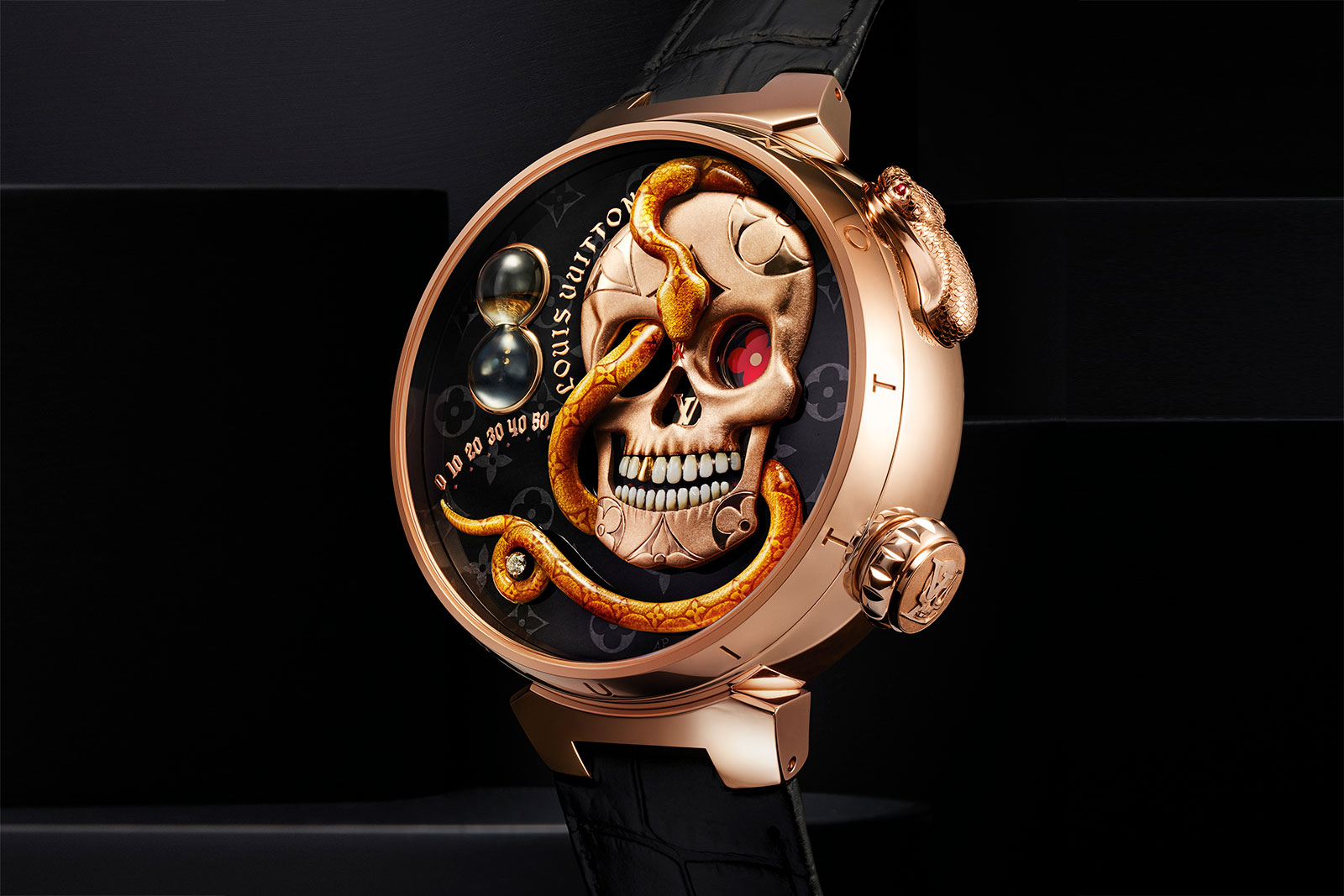 Continuing Louis Vuitton’s slow-but-steady progress upwards as a technical watchmaker, the Tambour Carpe Diem is its flagship watch for 2021. The Carpe Diem is a minute repeater with a quadruple jacquemart – it incorporates four automata – along with a jumping hour and retrograde minutes display.

Developed and produced entirely in-house at La Fabrique du Temps, the Geneva complications specialist owned by Louis Vuitton, the LV 525 movement in the Carpe Diem is accompanied by artisanal decoration on the dial. All of the engraving is done by Dick Steenman of Art&D in Geneva, while the enamelling is the work of Anita Porchet, who needs no introduction.

One of the most impressive watches of the year, the Carpe Diem is highly complicated – and boasts extremely fine enamelling – but the gothic style will be a bit too much for many.

I saw the watch in person a few weeks ago, and I was amazed by the delicate quality of the artisanal decoration. The memento mori motif is not for me, but the work is unmistakably excellent. The snake is enamelled by Anita Porchet and particularly fine. It’s extremely slender and its skin is incredibly nuanced, covered in scales and the Louis Vuitton monogram. 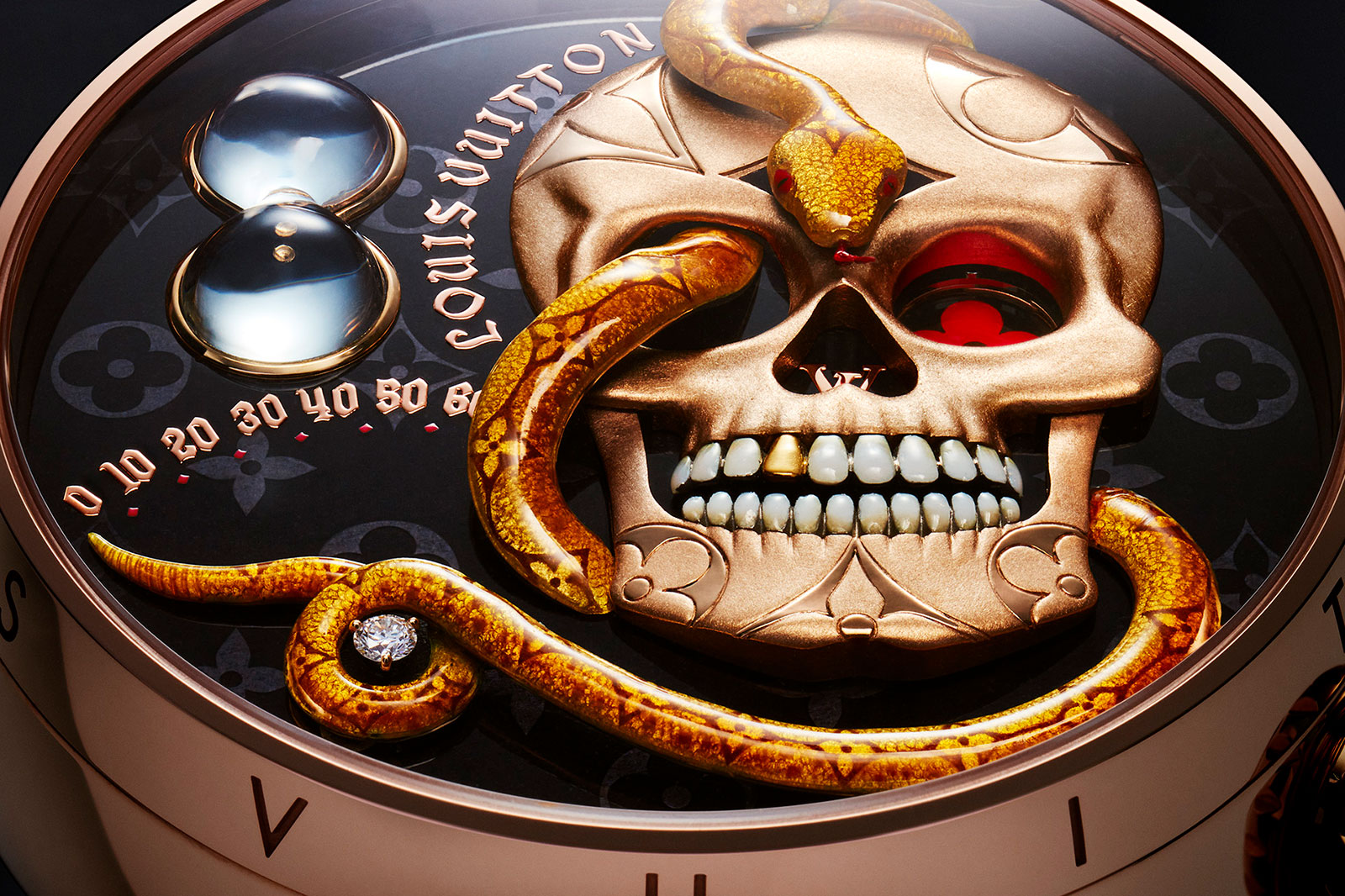 The tail of the snake is coiled around a single brilliant-cut diamond, while the eyes of the snake are a pair of rubies

The only tangible downside of the watch is its size. It is almost 47 mm in diameter and 15 mm high, and feels every bigger due to the narrow bezel and tall, sloping flanks of the Tambour case.

While Louis Vuitton is not a traditional watchmaker, they have been steadily putting out notable timepieces, and this certainly counts as one. And for US$475,000, the Carpe Diem is fair value for a watch of this complexity. 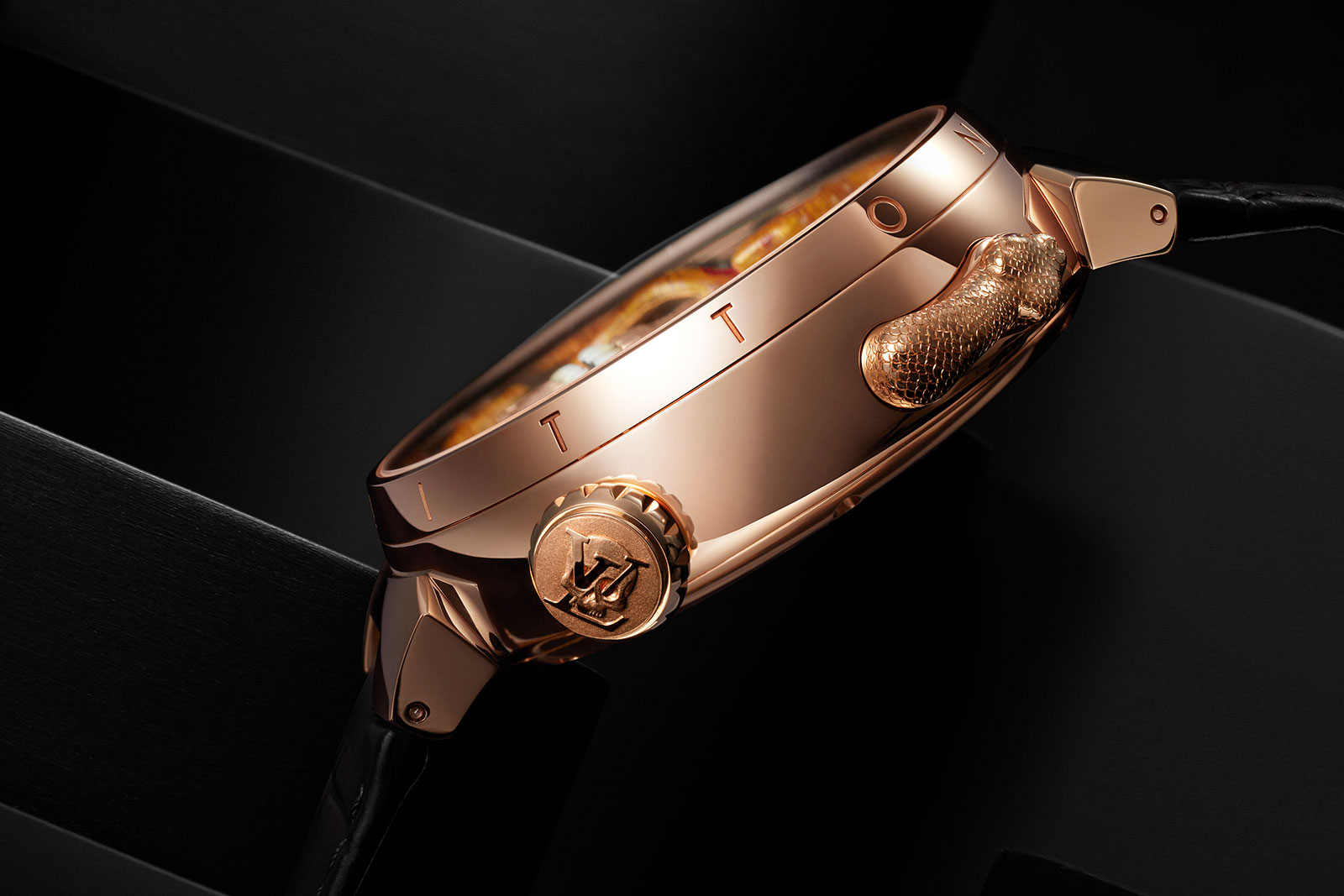 The extravagant aesthetic of the dial is made up of work by two artisans. The engraving – all done by hand naturally – was done by Dick Steenman, whose Geneva workshop Art&D counts Piaget and Van Cleef & Arpels amongst its other clients. Every element of the dial is engraved – dial, snake, skull, teeth, and hour glass – with the textures of the skull and snakeskin being exceptionally fine.

After engraving, the dial, snake, and teeth are then enamelled by Anita Porchet. The dial and snake are finished in translucent enamel, while the teeth are coated in bright white enamel. Exemplifying the refined enamelling that has made Ms Porchet perhaps the most famous enameller in watchmaking, the snake is outstanding in its detail and colour. 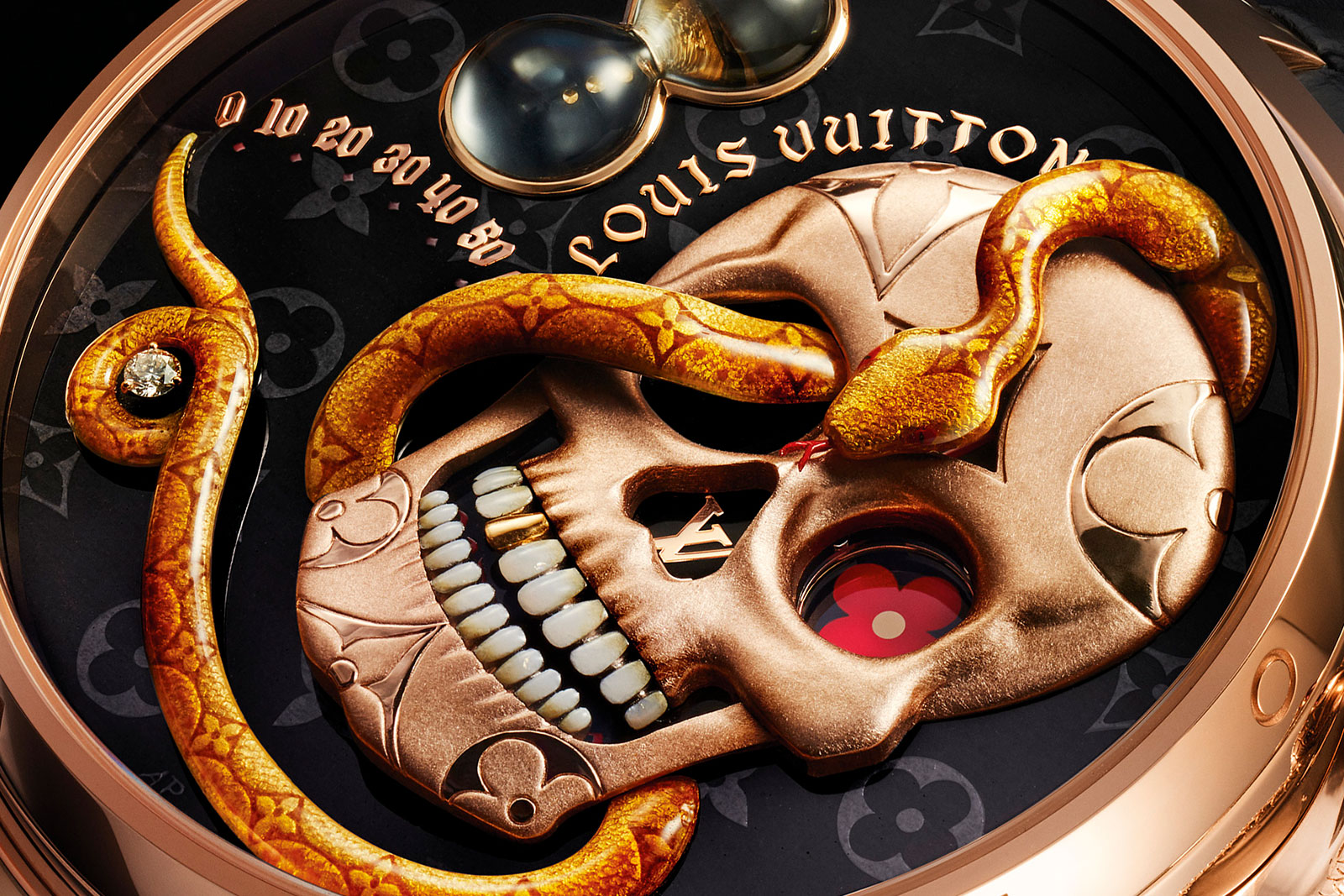 The automata are integrated into the displays of the Carpe Diem. Pushing the snake-shaped button at two o’clock triggers the jacquemarts, which start moving in sync in a 16-second mechanical dance.

The head of the snake pivots to reveal the hours in the skull’s forehead, and its tail simultaneously swings to point to the minutes on a retrograde scale at eight o’clock.

And a pivoted lattice slides into view in the left eye of the skull, transforming the emblem within from one component of the Louis Vuitton monogram into another: turning a rounded, four-petaled flower into a four-pointed star. And at the same time, the jaw of the skull lowers to reveal “Carpe Diem” between the two rows of enamelled teeth. 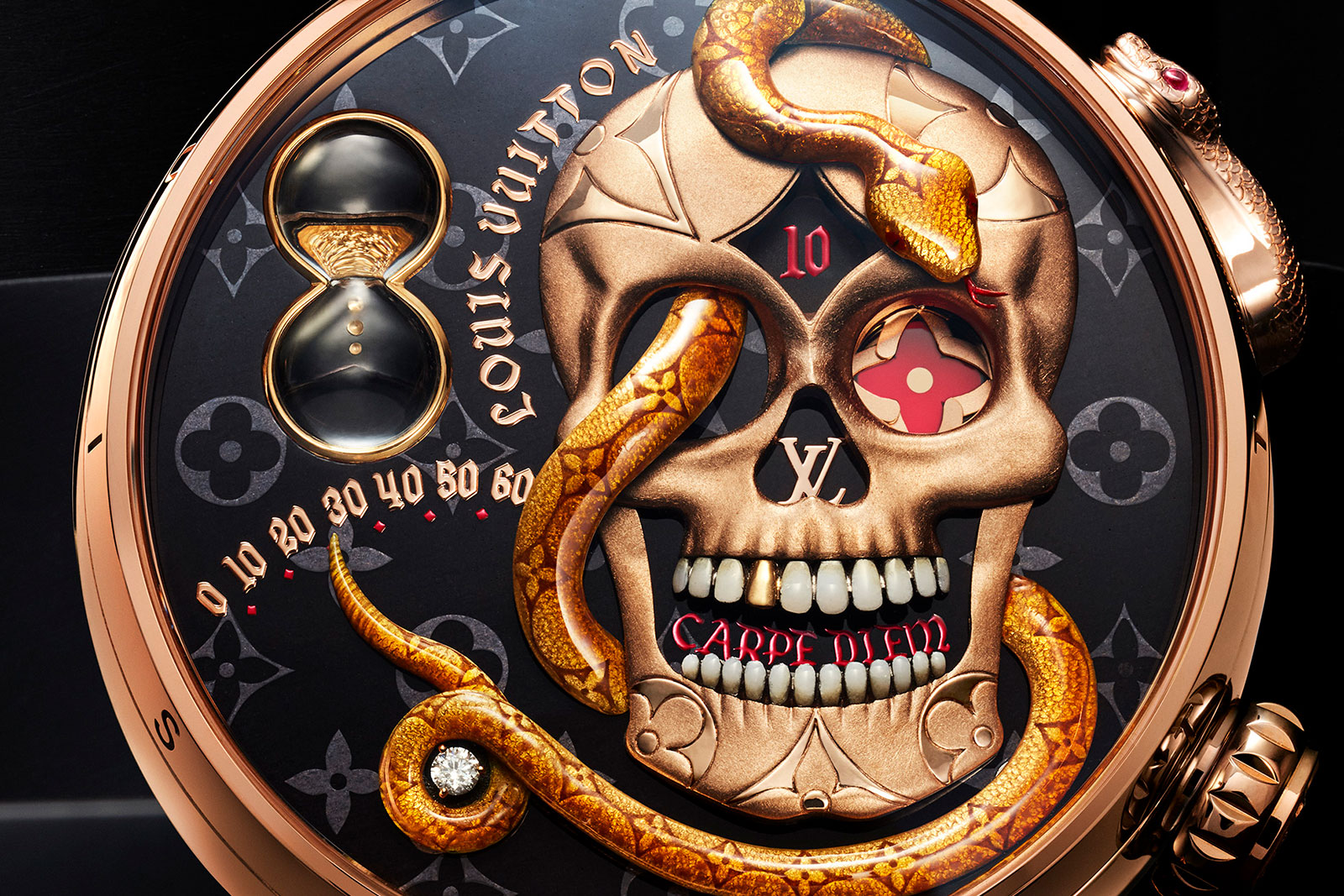 All of the mechanical action is powered by the LV 525, which is based on the minute repeating movement constructed by La Fabrique du Temp several years ago (and also found in the Laurent Ferrier Galet repeater). Boasting an impressive 100-hour power reserve, it’s a hand-wind movement made up of 426 components. 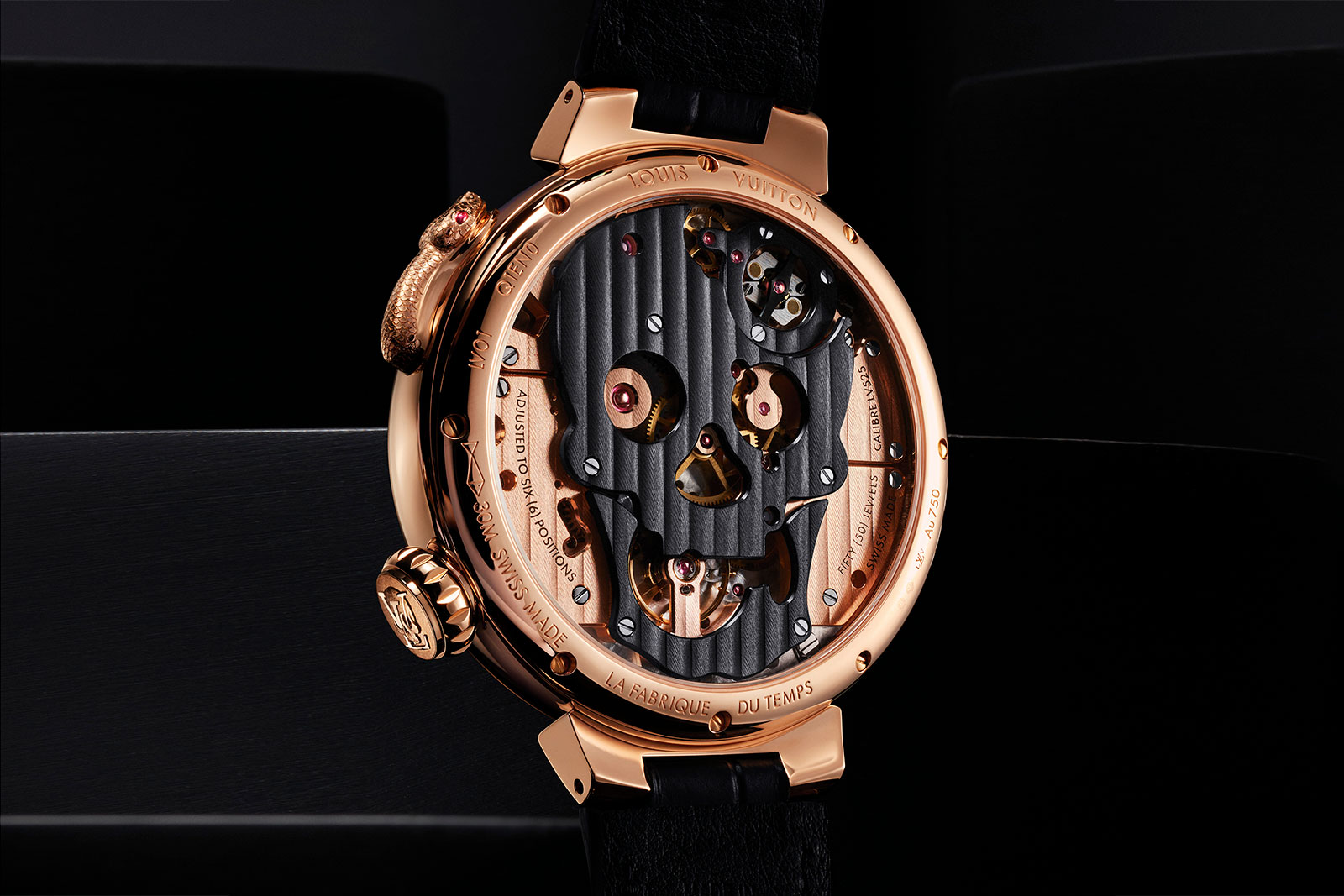 The bridges have been cleverly reshaped to form a skull on the reverse, with the eyes revealing jewel bearings and the mouth of the skull the balance wheel