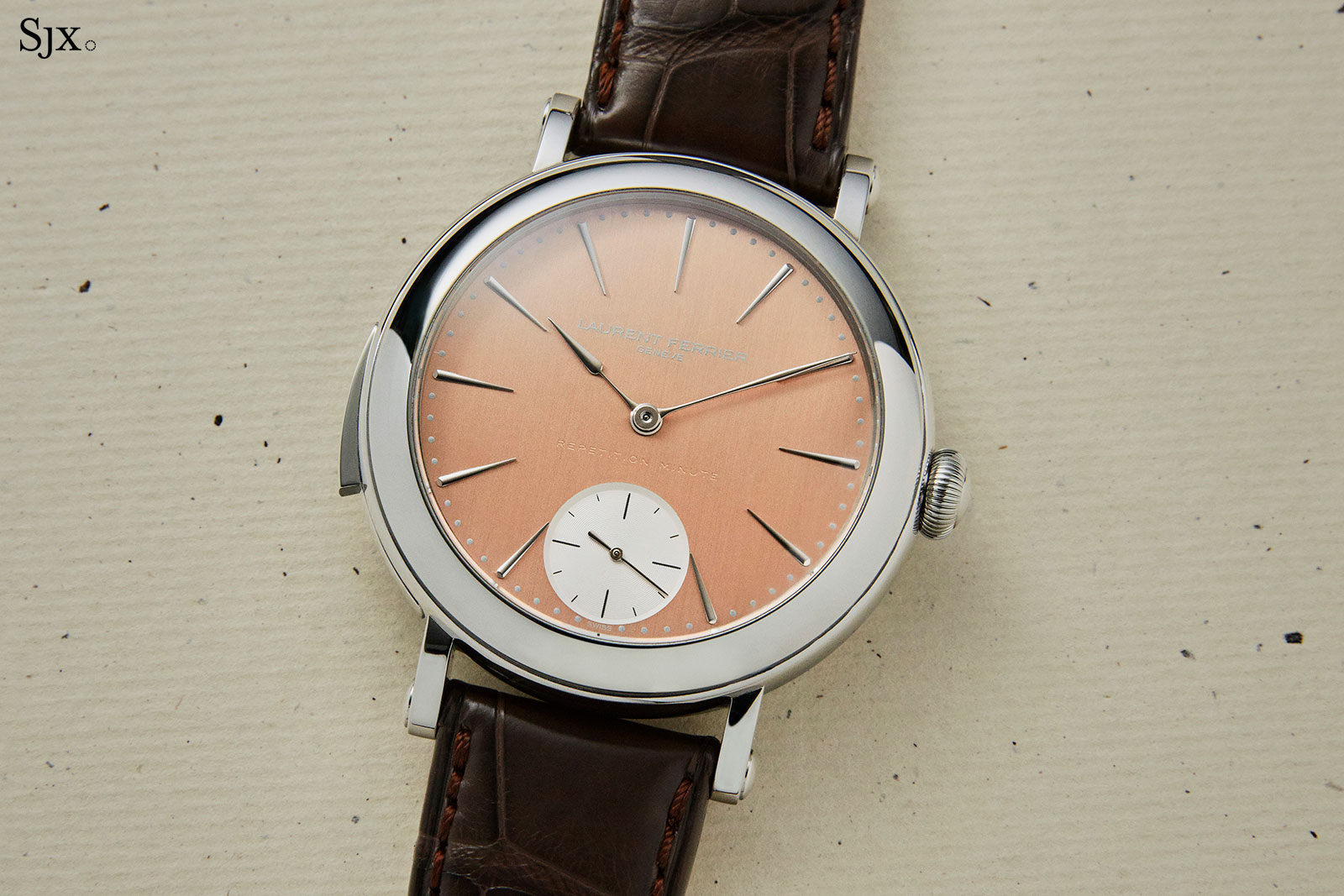 Not long after the introduction of its newly developed annual calendar, Lauent Ferrier unveiled the brand’s first ever minute repeater at Baselworld 2018. The Galet Minute Repeater is, and it almost goes without saying, sensuously and classically beautiful.

The repeater sports a 40mm bassiné case (which translates as “basin”), a style that has been dubbed Montre École, or “school watch”, as it was based on the watch Mr Ferrier had to complete for his graduation from watchmaking school.

That’s matched with a warm, salmon dial, which intriguingly features subtle glints of copper, achieved by plating the dial blank with 6N red gold and then brushing it to remove some of the plating while leaving a vertical, linear finish. Stylistically the look is quintessential Laurent Ferrier, with white-gold Assegai hands and markers, named after a slender African spear, while the seconds sit in a recessed, silvered subdial at six that stands in stark contrast (perhaps too much) to the dial.

But the great subtlety lies in the text on the dial. The company logo is printed in muted grey, while the complication name is finely etched above the seconds, leaving it almost invisible. Laurent Ferrier has made the near-invisible complication labelling a tradition, starting with its tourbillon wristwatch. Laurent Ferrier has sensibly stuck to steel for the case material. The best sounding repeaters are often cased in steel (or sometimes titanium) as it is less dense than precious metals like gold or platinum. That means the metal transmits the chimes with greater brightness and clarity, resulting in a sound that is incredibly clean and crisp. Captured in video below, the movement uses two gongs: a D-sharp note for the hours, F-sharp for the minutes, and a combination double strike for the quarters.

Made up of 300 parts, the calibre LF 707.01 was developed by La Fabrique du Temps (LFDT), a Geneva complications specialist now owned by Louis Vuitton. It’s a company that helped establish Laurent Ferrier, having helped develop the movements in both the Tourbillon Double Hairspring and then the Micro-Rotor Automatic. LFDT founders Enrico Barbasini and Michel Navas, like Mr Ferrier, are former employees of Patek Philippe, which is where the trio first met; Messers Barbasini and Navas also hold a minority share in Laurent Ferrier today.

Consequently the movement layout is familiar, since versions of the same calibre have been used by Girard-Perregaux, Louis Vuitton and Ralph Lauren. But unlike other versions of the movement that are open-worked (in the case of Louis Vuitton), or pocket watch-inspired (Ralph Lauren), the Laurent Ferrier calibre is straightforward, in contrast to the elaborately constructed, earlier Laurent Ferrier movements.

One large bridge secures the barrel and wheel train, and another for the striking mechanism, while the balance cock sits in a round aperture. The base plate is decorated with circular graining while the bridges are adorned with broad, hand-applied Côtes de Genève. Though the bridges are large, they have elegantly formed outlines that emphasise the polished, bevelled edges. The bridge for the striking mechanism in particular features several inward and outward corners – a reassuring detail for an haute horlogerie watch. Most of the moving parts are covered, but the two hammers and the governor of the chiming mechanism are visible on the right side of the movement. However, Laurent Ferrier has integrated a few signature touches found in earlier calibres, elements that give the movement a touch of old school Geneva watchmaking. These include the long, blade-shaped winding pawl and the sharply formed bridge – which takes the form of a quaver – for the inertial flywheel of the governor. As with the recent Galet Annual Calendar, the watch has a simple and traditional Swiss lever escapement with a free-sprung, screwed balance. This contrasts with the more exotic double-wheel Natural Escapement of the Galet Automatic and the double hairspring of the tourbillon. As with most Laurent Ferrier movements, the movement has an 80-hour power reserve.

The Laurent Ferrier Galet Minute Repeater Montre École is priced at SFr260,000. Only five pieces will be produced over the course of the next two years.

A brand new movement and a practical complication.