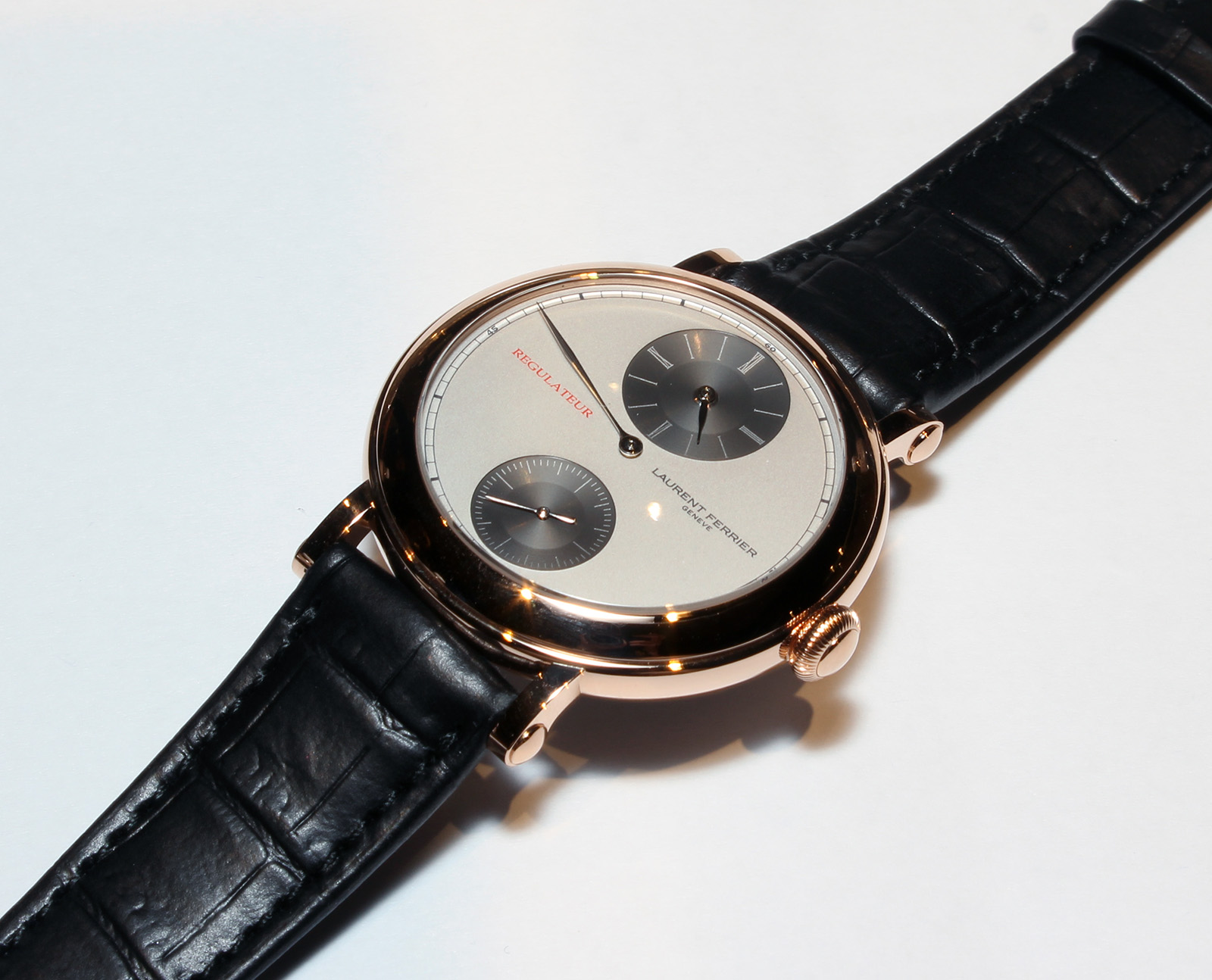 Following the launch of the Galet Regulateur in June, Laurent Ferrier has tweaked the model to create an eight-piece limited edition exclusively for Singapore. Previously available in stainless steel or white gold with a silver dial, the Singapore edition combines a red gold case with an opaline dial.

In Singapore for the launch, Vanessa Monestel, chief executive of Laurent Ferrier explained the rationale behind the new model, “The Regulateur is a very special watch… for Laurent Ferrier… [as] he wanted to pay tribute to the watchmakers in the workshop.” That’s a nod to the historical roots of the regulator dial.

Regulator clocks originated in the early 18th century as tools to aid astronomical observations. They typically had two sub-dials on the main dial, each counting the hours, minutes and seconds on separate axes for greater legibility and precision. By the 19th century, regulator clocks were used as reference clocks – the dial layout made the time easily legible from afar – in watch factories when regulating and setting the timepieces being produced. Like conventional regulator wristwatches, the Singapore edition has central minutes with the hours in a sub-dial at 12 o’clock and running seconds at six o’clock (the position of the sub-dials is a matter of convenience due to the base movement; in contrast, historical regulator clocks always had the seconds at 12 o’clock).

Unlike the stock Galet Regulateur, the dial has an opaline finish, while the recessed hour and seconds sub-dials are slate grey with a concentric azurage finish. The dial features a railway minute track with Arabic numerals in slate grey for the quarters. While all the hands are in white gold, each is shaped differently – leaf-shaped for the hours, the spear-like assegai hand for the minutes, and baton hand for the seconds.

The case is 18k red gold and Montre École style, a design that was first introduced in January 2017. It is modelled on Laurent Ferrier’s “school watch” – the literal translation of montre ecole – and features a delicately rounded bezel and band with extended, pastille lugs meant to recall an earlier time in watchmaking when pocket watches first made the transition to the wrist. In keeping with the warm colour of the case, “Regulateur” on the dial is now red, instead of blue. The basic version of the Laurent Ferrier automatic movement, seen here in the Galet Micro-Rotor Powering the watch is the elaborately constructed cal. 228.01, which is based on the signature micro-rotor automatic that powers all of Laurent Ferrier’s watches save for the tourbillon. The movement features a micro-rotor and the proprietary double direct-impulse escapement with a silicon pallet fork. And as is usual for Laurent Ferrier, the movement is decorated with large Côtes de Genève on the main bridges, circular graining on the main plate and black-polishing on the bridges of the balance and micro-rotor.

The Galet Regulateur Singapore edition is limited to eight pieces and is priced at S$87,000, or about US$64,000.