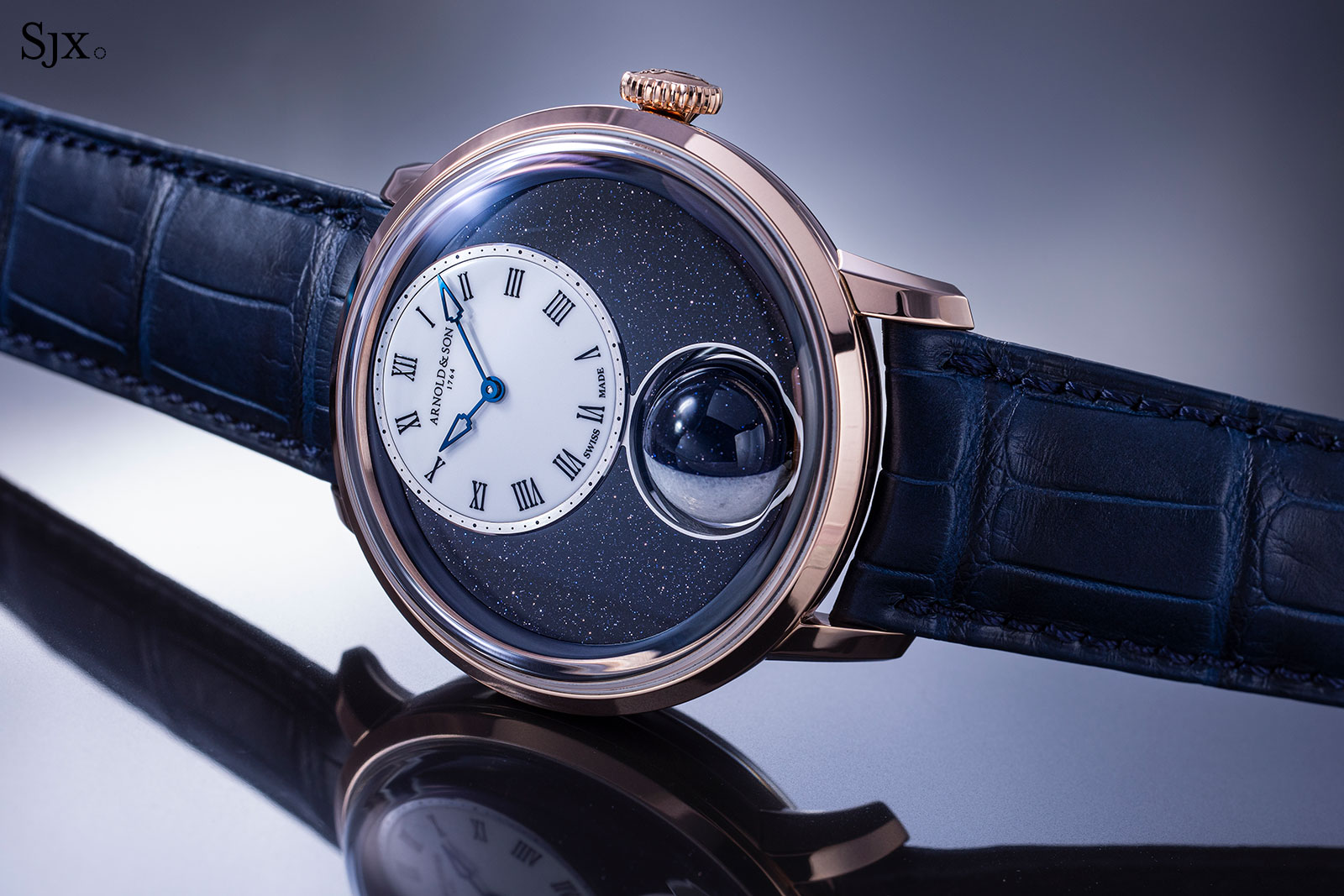 Powered by an in-house movement like all Arnold & Son (A&S) watches, the Luna Magna typifies the sort of smartly-executed simple complications that A&S excels at. The hand-wind movement is sharply finished, while the moon phase sphere is an unusual combination of two halves in aventurine glass and white marble. 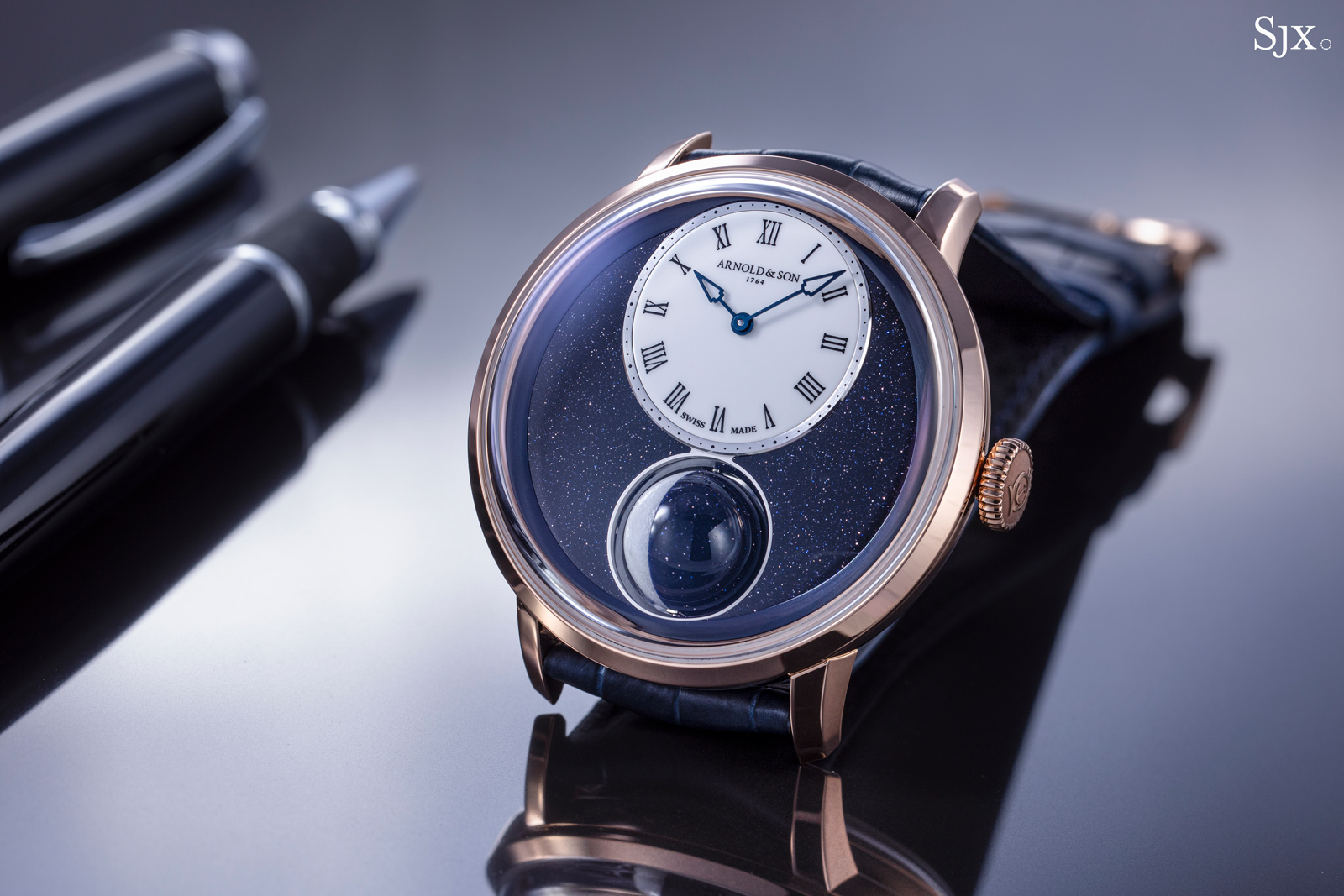 The Luna Magna has simple but striking aesthetics. The dial is symmetrical and made up of classical details like Romain numerals and blued hands. But it has a very, very large moon phase display that’s also spherical.

So it doesn’t try to do very much – the dial shows hours, minutes, and age of the moon – but it does the moon phase well. A&S describes it as the “largest moon ever built into a wristwatch”, which I do not dispute in principle, and it certainly looks the part. But strictly speaking, “ever” is inaccurate, for the spherical moon in the Konstantin Chaykin Lunokhod is the same 12 mm in diameter. 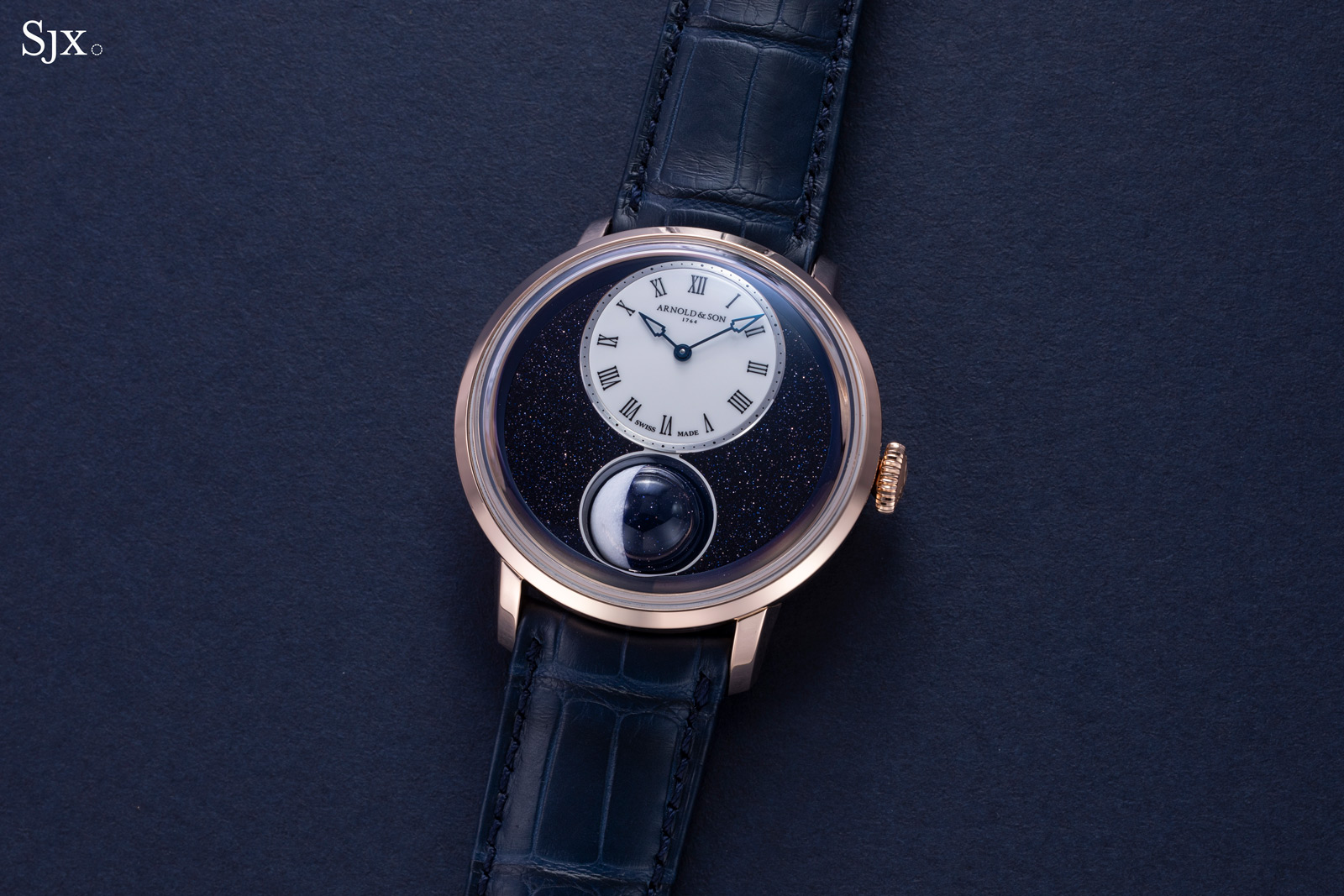 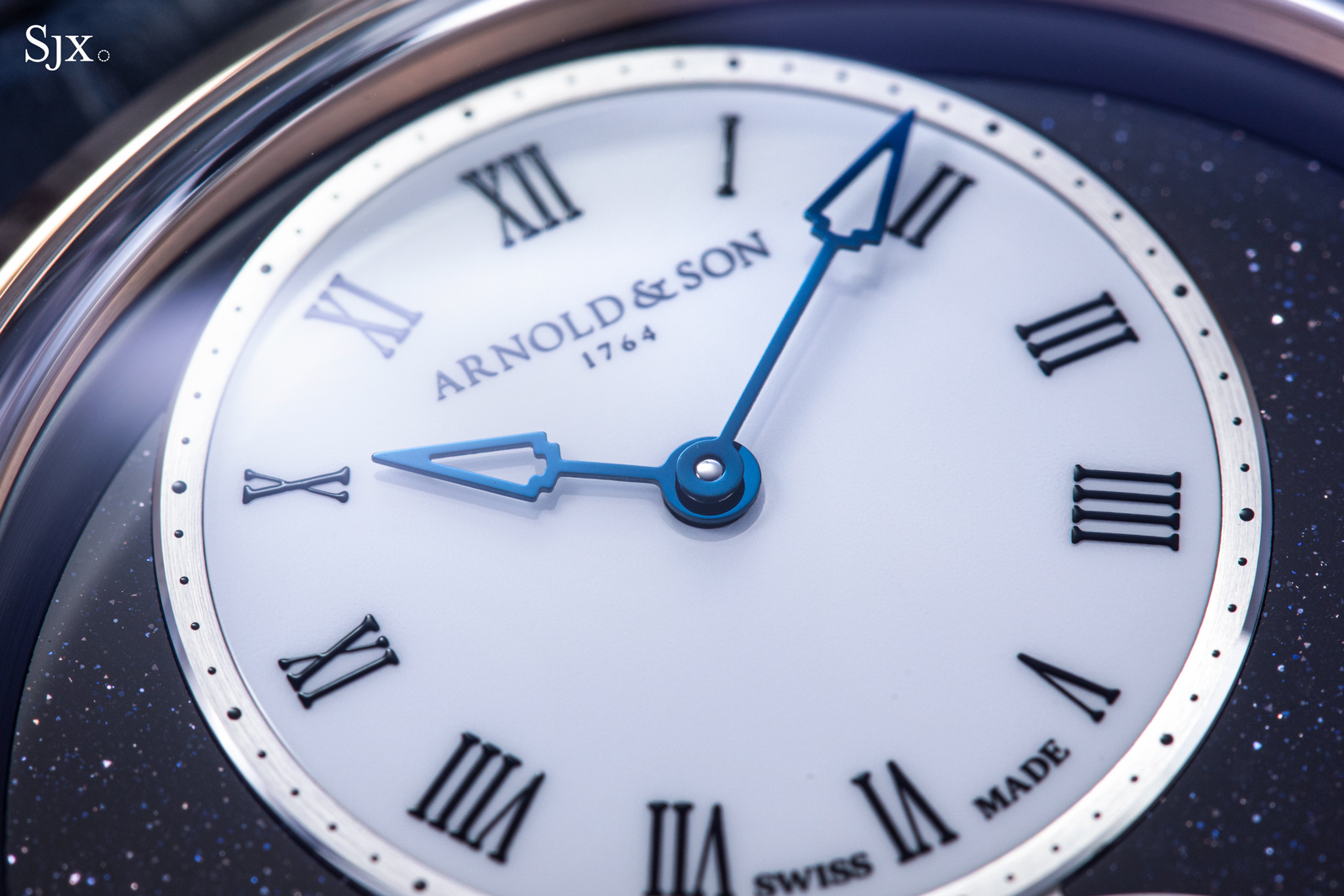 While A&S did have extra-large moon phase display in a past model, it was a flat moon phase, lacking the three-dimensionality of the Luna Magna. That size of the moon sphere means it requires substantial clearance under the crystal, which leaves the total case height, including the crystal, a tall 15.9 mm. The moon seen from the back

The movement inside is also well done both in styling and finish. It’s clearly a modern movement, but does without the aggressive styling of many contemporary calibres, which is a good thing given the design on the front.

It incorporates interesting details like the open-worked bridge for the going train, as well as something practical – a graphical moon phase indicator for setting the spherical display more precisely. And the movement is also well finished. Though most of the components are finished by machine, the decoration is done cleanly and done well, bringing to mind movements from comparable brands like H. Moser & Cie. That said, A&S does slightly better, with a handful of components revealing finer hand finishing, like the click for the crown wheel. Set against a sparkling, glossy aventurine glass dial that evokes outer space, the moon phase and time display on the Luna Magna are a perfect pairing. The moon phase is extreme in size but simple in style, while the time display is just enough. 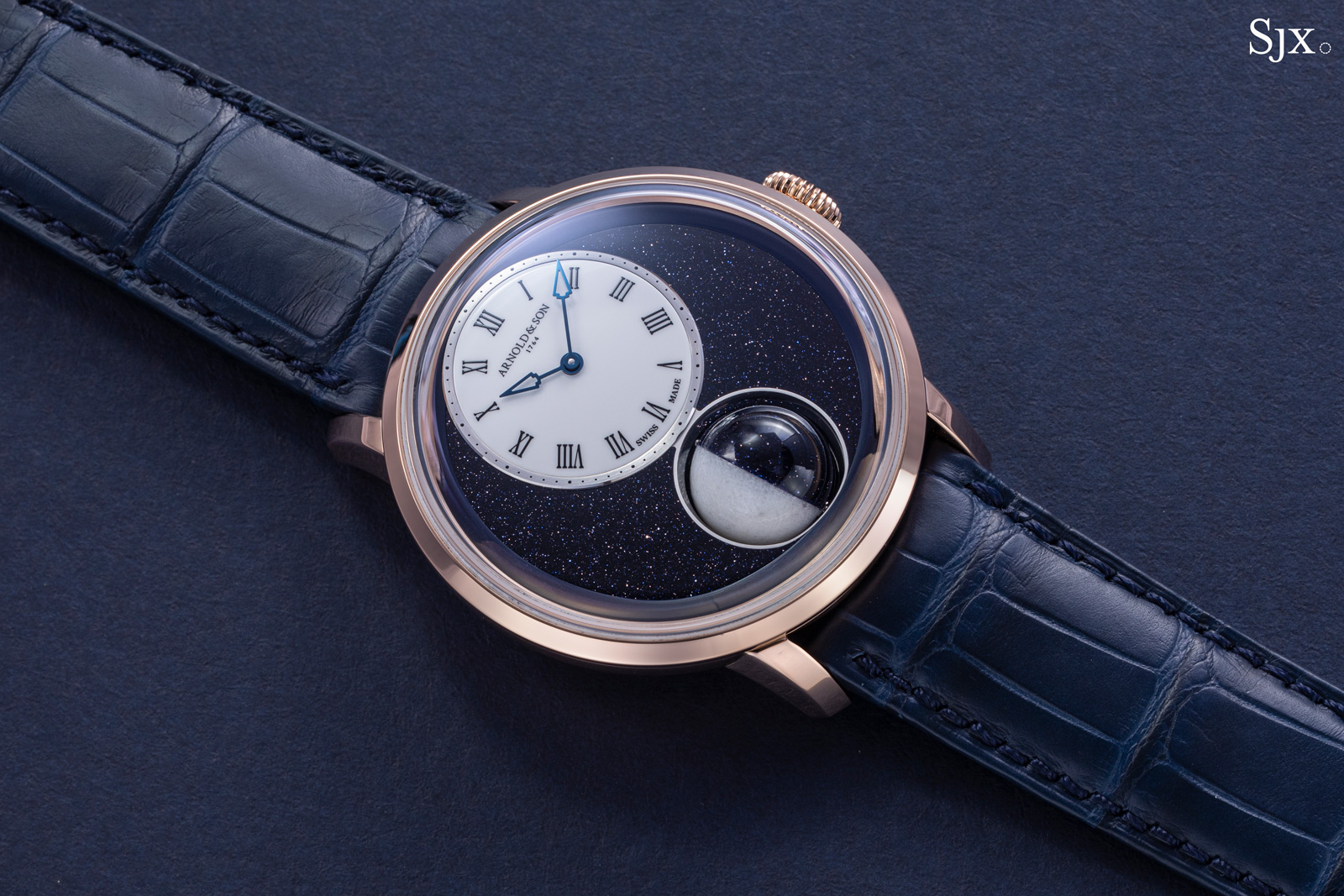 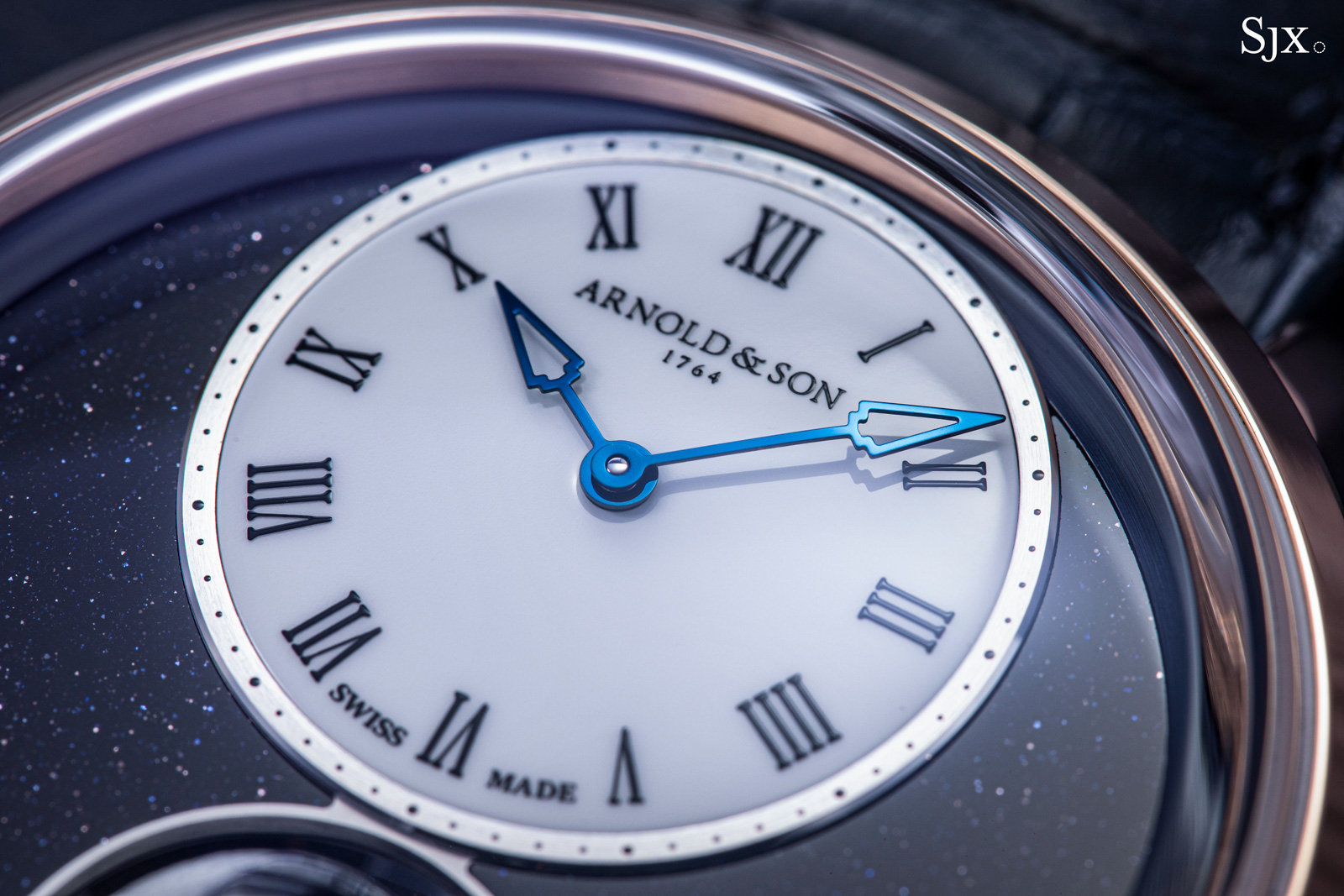 The moon sphere is an astonishing 12 mm in diameter, making it as wide as a Rolex Daytona is thick. Made of two halves in aventurine glass and marble respectively, the moon phase functions like a conventional moon phase, moving one step a day. It is accurate to a day in 122 years, which is the industry norm.

Setting the moon phase is straightforward: it can be set backwards and forwards via the crown. The spherical moon on the front is impossible to set precisely due to the lack of a scale, but the secondary moon phase display on the back – made up of a pointer against a graduated scale – makes it reasonably easy. Just above the moon phase display is the time display, which is a simple, white-lacquered sub-dial with blued steel hands. Functional and classical, the time display blends right into the dial. It’s enough to be useful, but not so much that it takes away from the moon phase or aventurine glass, which are arguably more interesting. The Luna Magna is larger than it looks. The 18k red gold case is 44 mm in diameter, and 15.9 mm high. It doesn’t feel that wide on the wrist, due to the relatively short lugs, but it is obviously thick in profile.

Much of the thickness is the huge domes of the sapphire crystals on the front and back, so the actual thickness is not extremely apparent, but the crystal looks bulbous at certain angles. That said, the Luna Magna doesn’t look clumsy, due to its restrained design and airy aesthetics on the dial. The Luna Magna is powered by the A&S1021, an in-house movement that’s clearly been developed specifically to accommodate the oversized moon phase sphere.

A twin barrel movement with a lengthy power reserve of 90 hours, the A&S1021 has all of its key elements arranged in an arc around the moon sphere.

The crown wheel for winding sits right beside the crown, with the ratchet wheels for the two barrels right above. To their left is the going train, which culminates in the balance wheel to the right of the moon sphere. And right in the centre, sitting over the barrel bridge, is the scaled moon phase indicator. The moon sphere with the crown wheel to its left Though a relatively simple movement, it has an attractive, technical appearance as a result of its layout and details. It incorporates a few smart aesthetic flourishes, like the open working on the going train bridge and balance cock, which reveals gilt components that give the movement richer colours. Decoration of the movement is comprehensive, neat, and appealing in style. The radial Cotes de Geneve, perlage, and bevelling on the bridges are done by machine but refined in appearance. The bevels, for instance, have the trademark linear striations that indicate they were cut with a diamond-tipped tool in milling machine.

But some components reveal hand finishing, like the ratchet wheel with mirror-polished bevels on its spokes and inner edges. And the winding click for the crown wheel is similar finished, showing mirror-polished, bevelled edges that bear no machining marks at all.

It’s relevant that A&S is a sister company of movement maker La Joux-Perret – both are owned by Citizen – which contributes to the finishing of the new Citizen Caliber 0200, a watch that boasts an impressive movement in both construction and finishing. There’s definitely some shared knowledge at work here. Polished bevels on the spokes The Luna Magna is an attractive watch that is executed to a high quality, and incorporates elements that indicate the attention to detail in its conception. It manages to be unusual with its oversized moon sphere, while remaining eminently classical in style.

Correction April 11, 2021: The moon sphere is the largest found in a wristwatch, but it is not unique; it’s identical in size to that in the Konstantin Chaykin Lunokhod.

Correction April 27, 2021: The balance wheel is not free sprung as stated in an earlier version of the article.

Business News: Watches & Wonders 2021 Will Happen Online - And in Shanghai