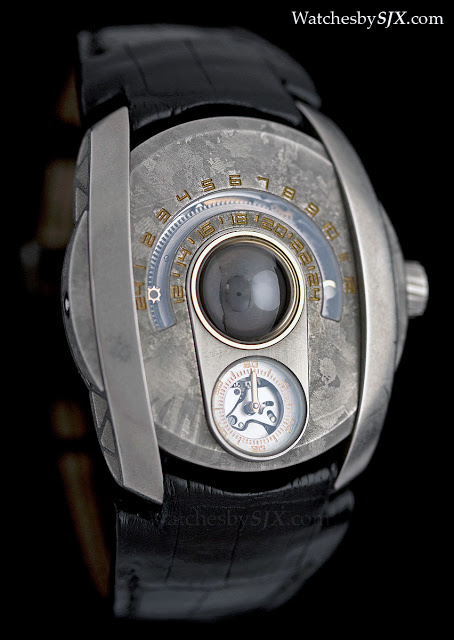 Named after the Lunokhod (Russian for “Moonwalker“) rovers sent to explore the lunar surface in the seventies, the Konstantin Chaykin Lunokhod is, appropriately enough, a moon phase wristwatch. This is Russia’s answer to the avant-garde, sci-fi inspired watchmaking of Urwerk, MB&F and Romain Jerome.

Attention is immediately drawn to the enormous, spherical moon phase in the centre of the watch. The moon phase display consists of a 12 mm diameter fixed sphere made from Bulat steel, with a black rhodium-coated silver half sphere which rotates around it, simulating the Earth’s shadow on the Moon. The time is indicated on the 24 hour scale around the moon sphere, with a small sun pointer for day time and a moon for night. The numerals for the hours are heavily engraved and filled in gold. At six o’clock is the sub-dial for the minutes display. Shaped like the Lunokhod lunar rover, the case of the watch is made from Bulat steel, just like the moon sphere. Made by Sergei Luniov, a Russian gun maker, Bulat steel is unique to Russia. A carbon steel alloy similar to Wootz steel, Bulat steel appears patterned, with light and dark grey marbling, due to the iron and iron carbide content. The texture and colour of the Bulat steel case is incredibly fascinating and beautiful. For all its beauty and hardness, carbon steel does rust. Konstantin Chaykin has found a proprietary solution to that problem, which unfortunately cannot be revealed. According to Konstantin Chaykin, the Bulat steel case of the Lunokhod will be as durable as a stainless steel case.

Appearing rough hewn at a distance, the case reveals some beautiful details up close. For instance the crown is shaped like the wheels of the Lunokhod rovers and is topped with a gold insert. Likewise the flanks of the lugs are finished with a relief, frosted surface. Appearing massive from the front – the case is 50 mm wide – the Lunokhod surprises in profile where it stands only 10.7 mm high. The Lunokhod is actually a fairly slim wristwatch.

Inside is a donut-shaped movement – the centre is occupied by the spherical moon – with 21 jewels and a 48 hour power reserve. Every single component of the movement is made in Russia. Much of it is made in-house by Konstantin Chaykin, but certain components like jewels and the hairspring are made by other Russian watchmakers (presumably the large scale, entry to mid-range Russian watchmakers). The movement does show hand-finishing – like the polished teeth of the barrel ratchet and the polished bevels of the bridges – though some of the components, like the shock absorber for the balance staff capstone, appear quite crude. Also note that the watch pictured here is a prototype, so the movement is not in saleable condition. According to Konstantin Chaykin, the reason for it is primarily due to the Bulat steel case, which is extremely expensive to produce and finish. Steel is typically the most ordinary and boring case material you will find; I cannot think of another steel case as exotic and interesting as this one. Hands-on with the Konstantin Chaykin Cinema - a cinema on your wrist, made in Russia (with live photos and price)