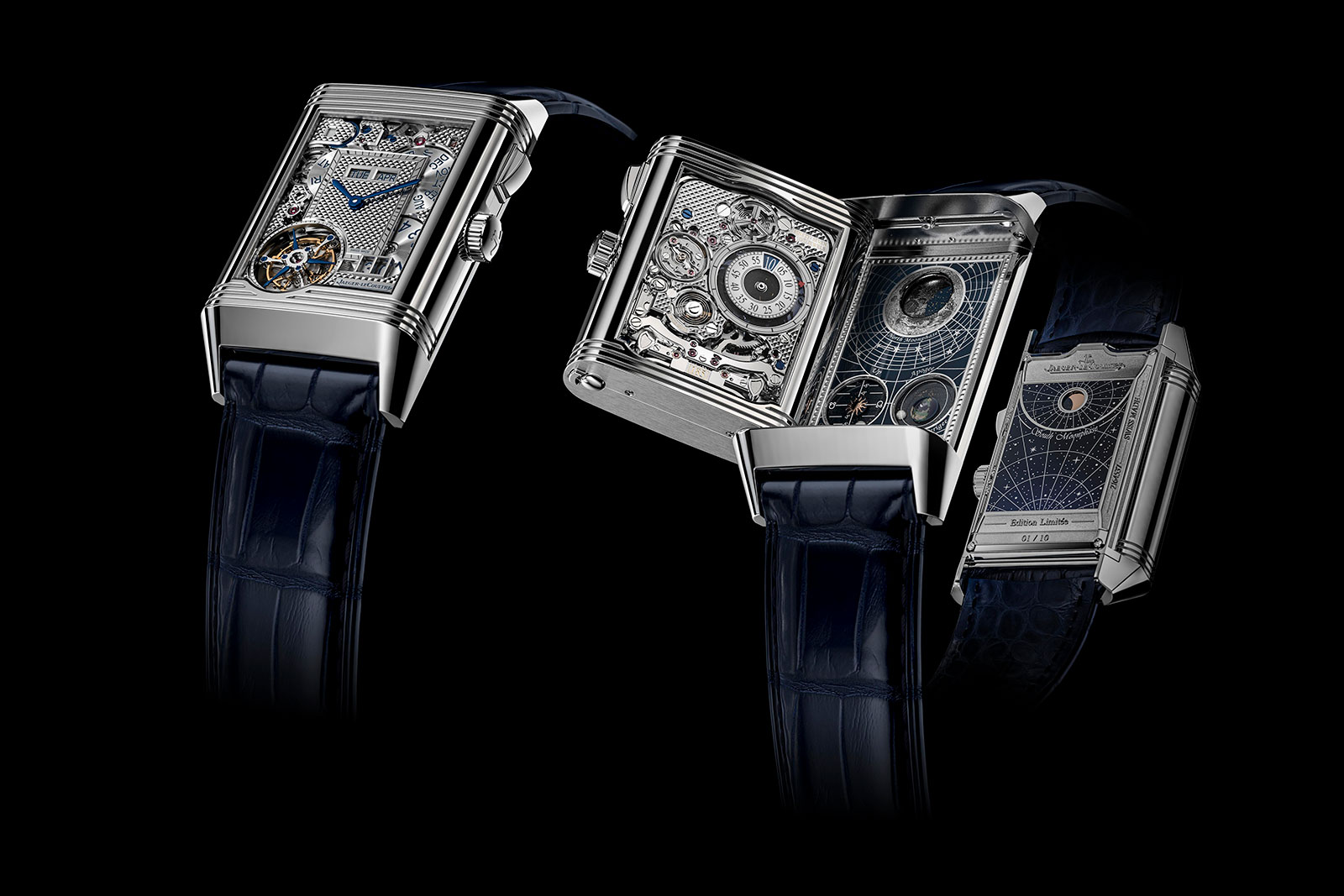 Appropriately for the 90th anniversary of famed reversible wristwatch, Jaeger-LeCoultre (JLC) has debuted the ultimate Reverso. Boasting 11 complications, including a tourbillon, minute repeater, and instantaneous perpetual calendar, the Reverso Hybris Mechanica Calibre 185 Quadriptyque is a monumental wristwatch with four faces and a movement made up of 800 parts.

The Calibre 185 Quadriptyque is smaller than the Reverso Grande Complication à Triptyque – which was so big as to be almost unwearable for most – but still sizeable enough to be clunky. It measures 51.2 mm by 31 mm, while standing 15.15 mm high, making it larger than the biggish Nonantième that was launched at the same time. Granted, the size is necessary for the ultra-complex, four-faced movement.

Majority of the complications within the new grand complication can be found in past JLC watches, making the Calibre 185 Quadriptyque something of a greatest-hits compilation for the brand. 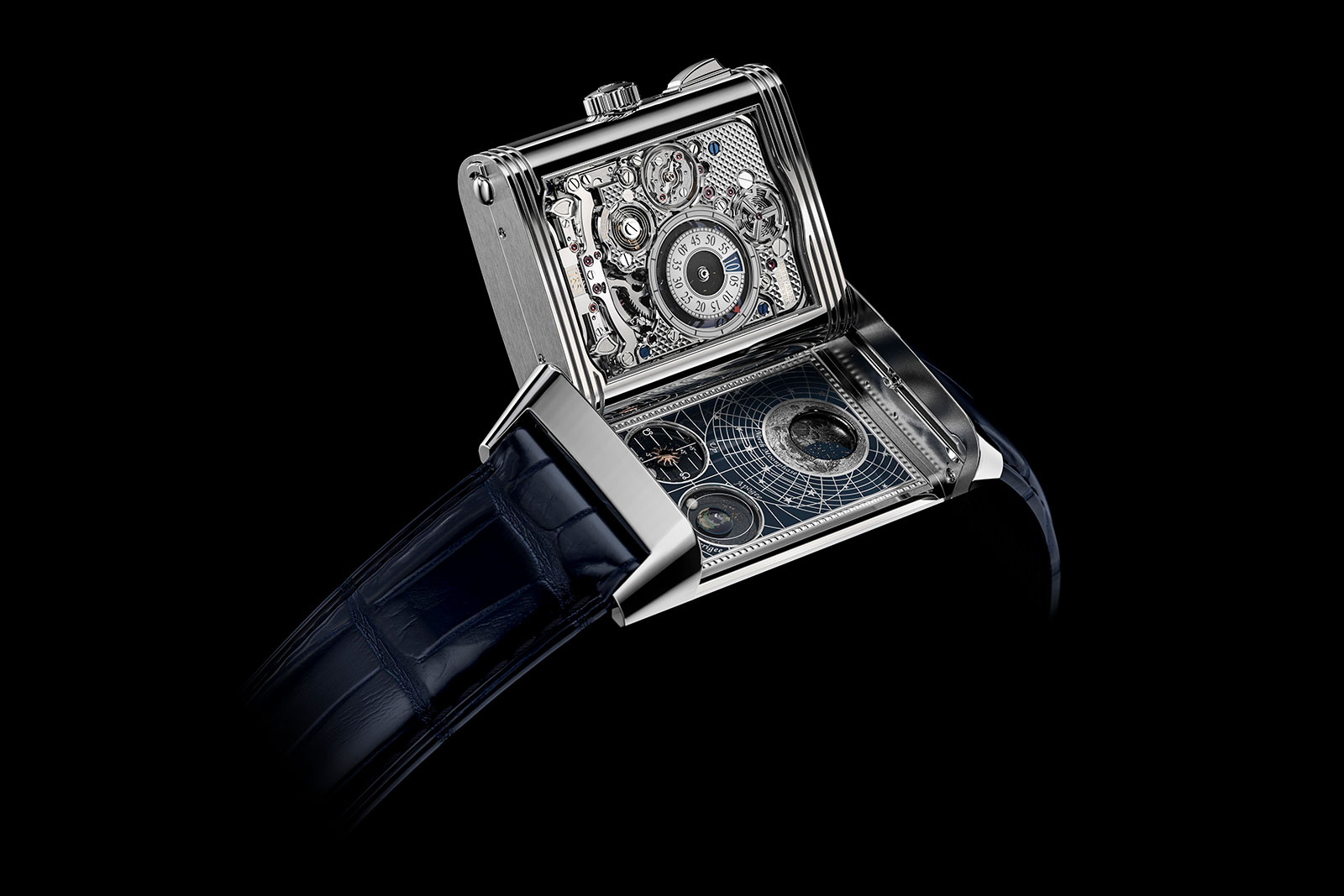 Impressive as it is, the Calibre 185 feels dated, in the sense that watches with numerous complications stacked up were a “thing” in the 2000s; the Triptyque was launched in 2007 and truly exotic in its day. Now that such watches are fairly common, with many leading brands having their own grand multi-complications, the concept is less impressive, regardless of the technical achievement.

It’s also worth pointing out that the watch is elaborately decorated – mainly with Clous de Paris guilloche and blue lacquer – but it is still lacquer rather than fired enamel. Finer, artisanal decoration would be appropriate given what the watch costs.

Still, all of that matters little since only ten of the Calibre 185 will be made. The appetite for ultra high-end watches is strong, and the ten watches will sell, probably not swiftly but still surely.

At the same time, the retail of €1.35 million, or about US$1.60 million, feels a bit ambitious, given Jaeger-LeCoultre’s historical position as a maker of complications executed more affordably. The retail price is about the same as the Patek Philippe Sky Moon Tourbillon ref. 6002 (admittedly tough to obtain at retail), which offers a different set of functions but is comparable in complexity.

Logically arranged in two sections – each with two faces – the Calibre 185 Quadriptyque is made up of the swivelling case and the cradle below.

With the cal. 185 comprising 800 parts in total, the case contains majority of the movement, including the timekeeping going train, instantaneous perpetual calendar, as well as chiming mechanism. Within the cradle are 105 components of the movement, all dedicated to astronomical indications centred on the moon, including the age of the moon in both the Northern and Southern Hemispheres. 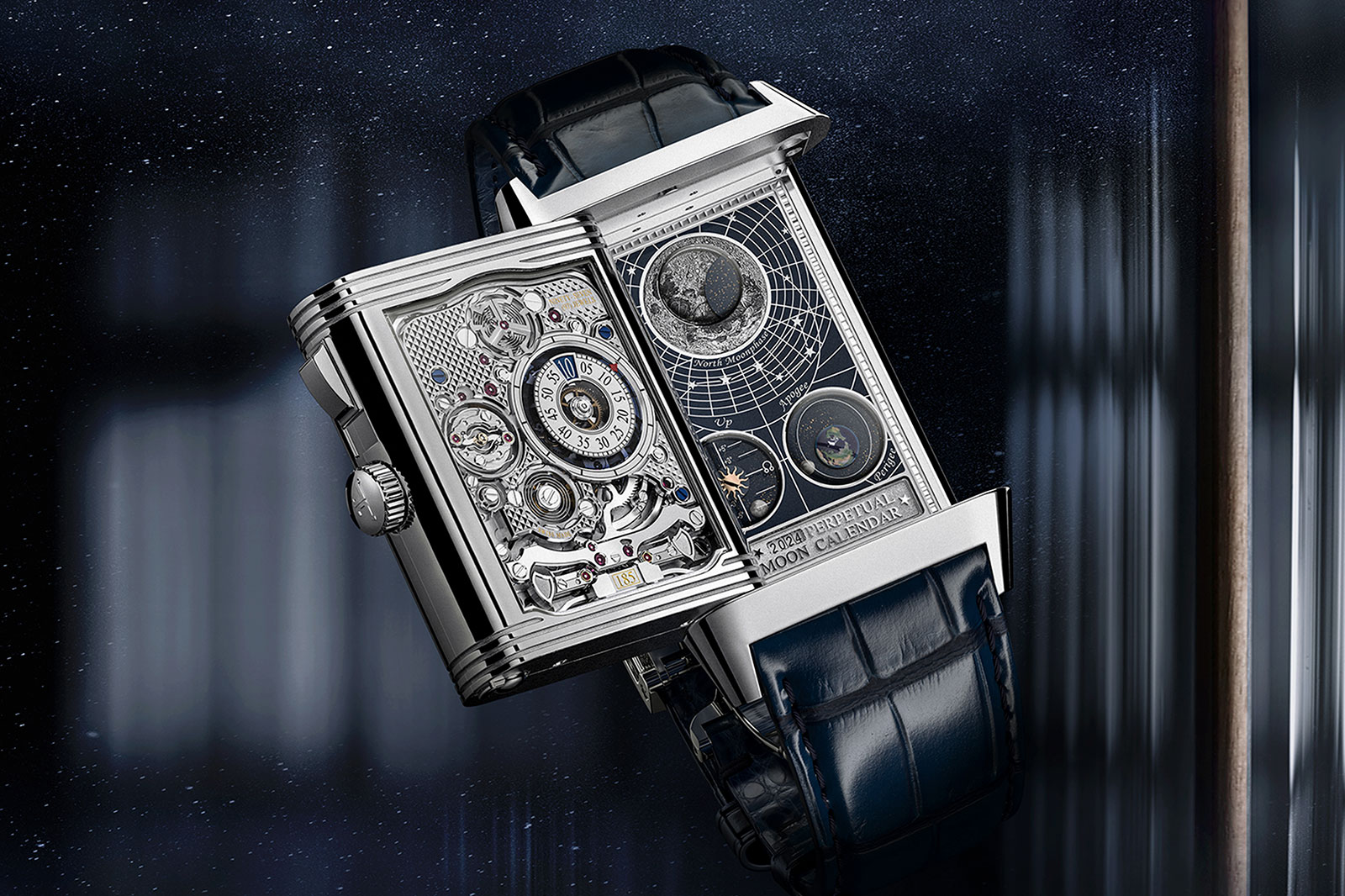 The first of the four faces of the Calibre 185 Quadriptyque is the most straightforward. It incorporates a flying tourbillon at seven o’clock, which has the familiar three-armed carriage construction found in other JLC tourbillon watches.

And it is also home to the perpetual calendar, showing the day, big date, month, and leap year indicator. It’s an instantaneous perpetual calendar, meaning all three change over instantly at midnight – a necessity in order to drive the astronomical indications on the cradle as we explain below. 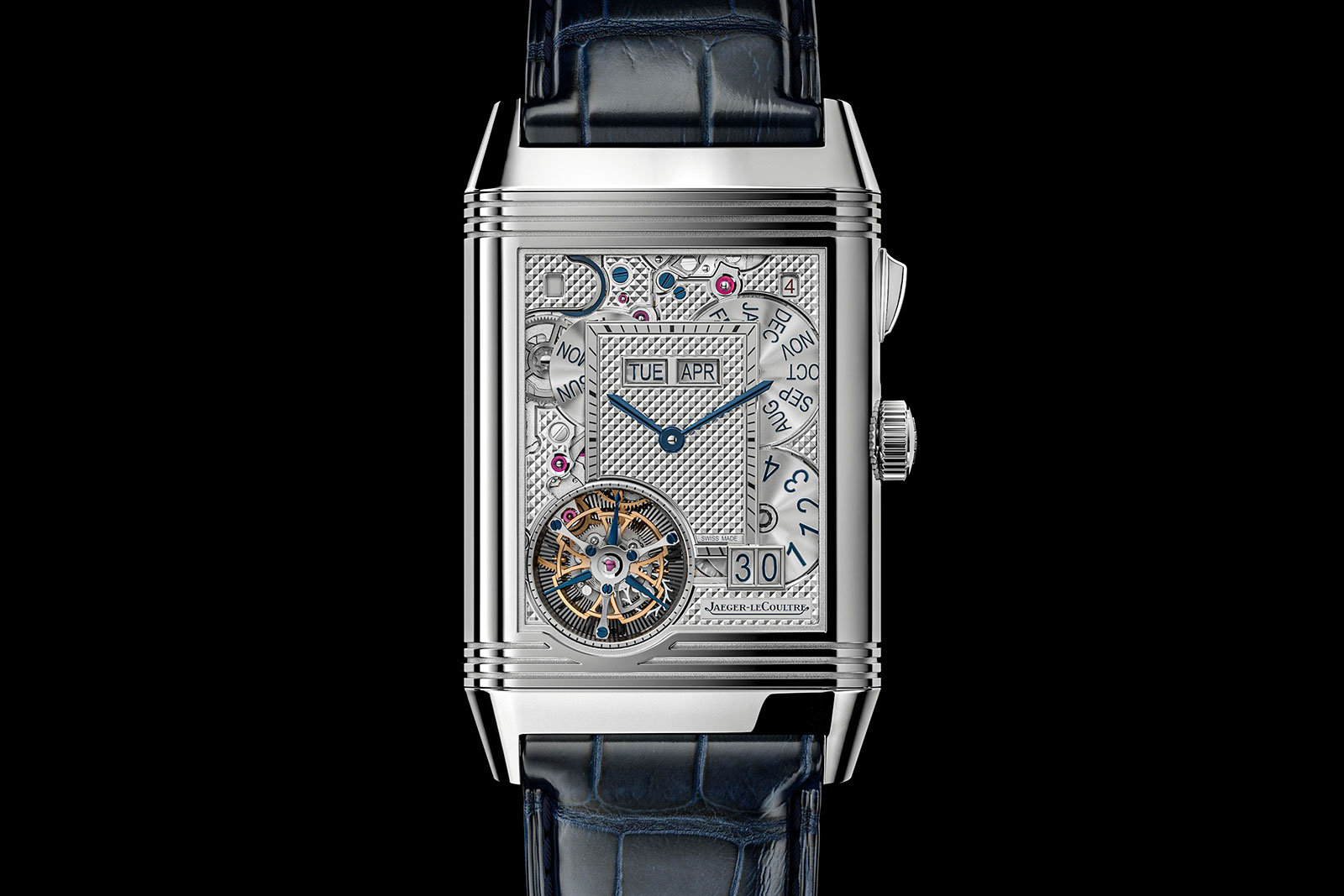 The time is also indicated on a secondary dial found on the reverse of the case; it is identical to the time on the front and not a second time zone. It indicates hours via a jumping disc, and minutes with a small pointer on the periphery of the minute scale.

Activated by the compact slide just above the crown, the repeater incorporates several of JLC’s past inventions for striking mechanisms, including crystal gongs that are mounted on the crystal for increased volume, as well as the multi-pivoted trebuchet hammers that strike with greater force. And the striking mechanism features redesigned racks that eliminate the traditional pauses in between the hour and minute chimes when there are no quarters to be struck, which is also found in earlier JLC grand complications. 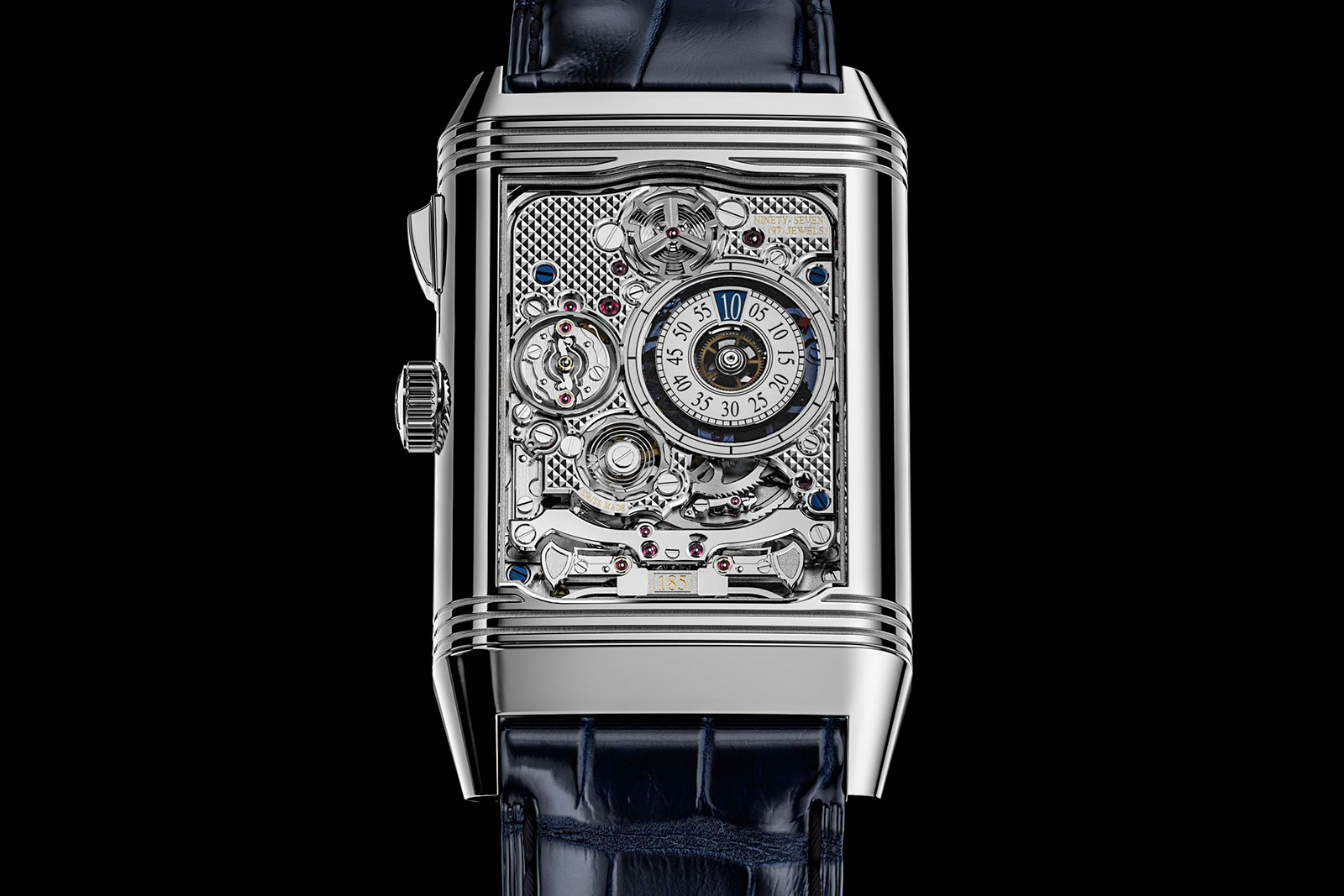 The twin hammers of the repeater sit on the lower edge of the movement, with the silent governor visible at nine o’clock

The inner face of the cradle shows the moon as visible from the Northern Hemisphere at 12 o’clock, with a laser-engraved moon against a blue lacquered sky. Notably, the moon phase is accurate to a day in 1,111 years, as compared to the 122.5 years of a typical moon phase display.

On its lower left is the draconic cycle indicator, which foretells the occurrence of a solar or lunar eclipse since it tracks the intersection of the orbit of the Moon relative to the Earth going around the Sun. To the right of the draconic cycle display is the anomalistic cycle indicator that shows the Moon’s distance from Earth. When a full moon occurs with the Moon closest to Earth, a “supermoon” occurs, with the Moon seeming about 14% larger in diameter when viewed from Earth. 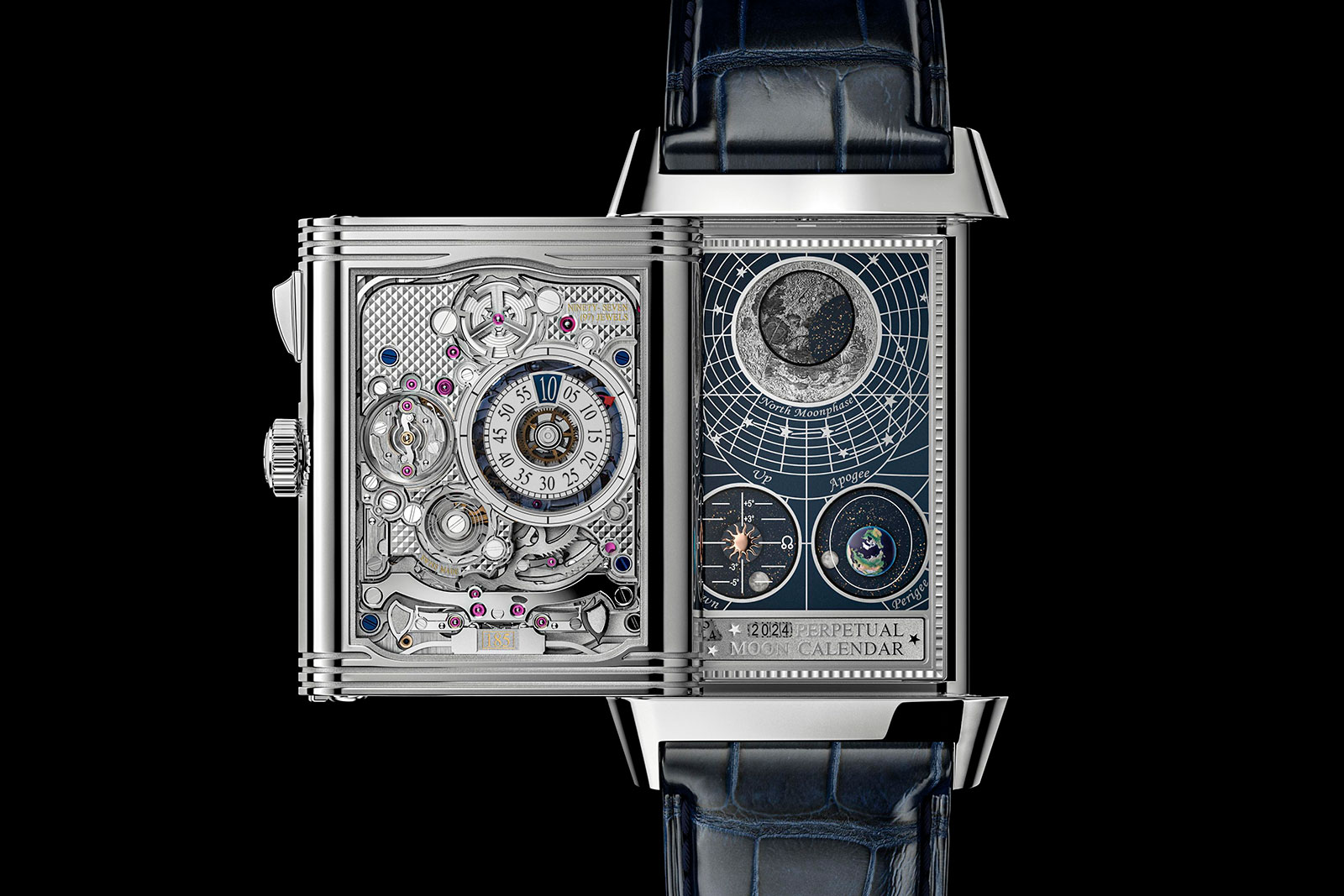 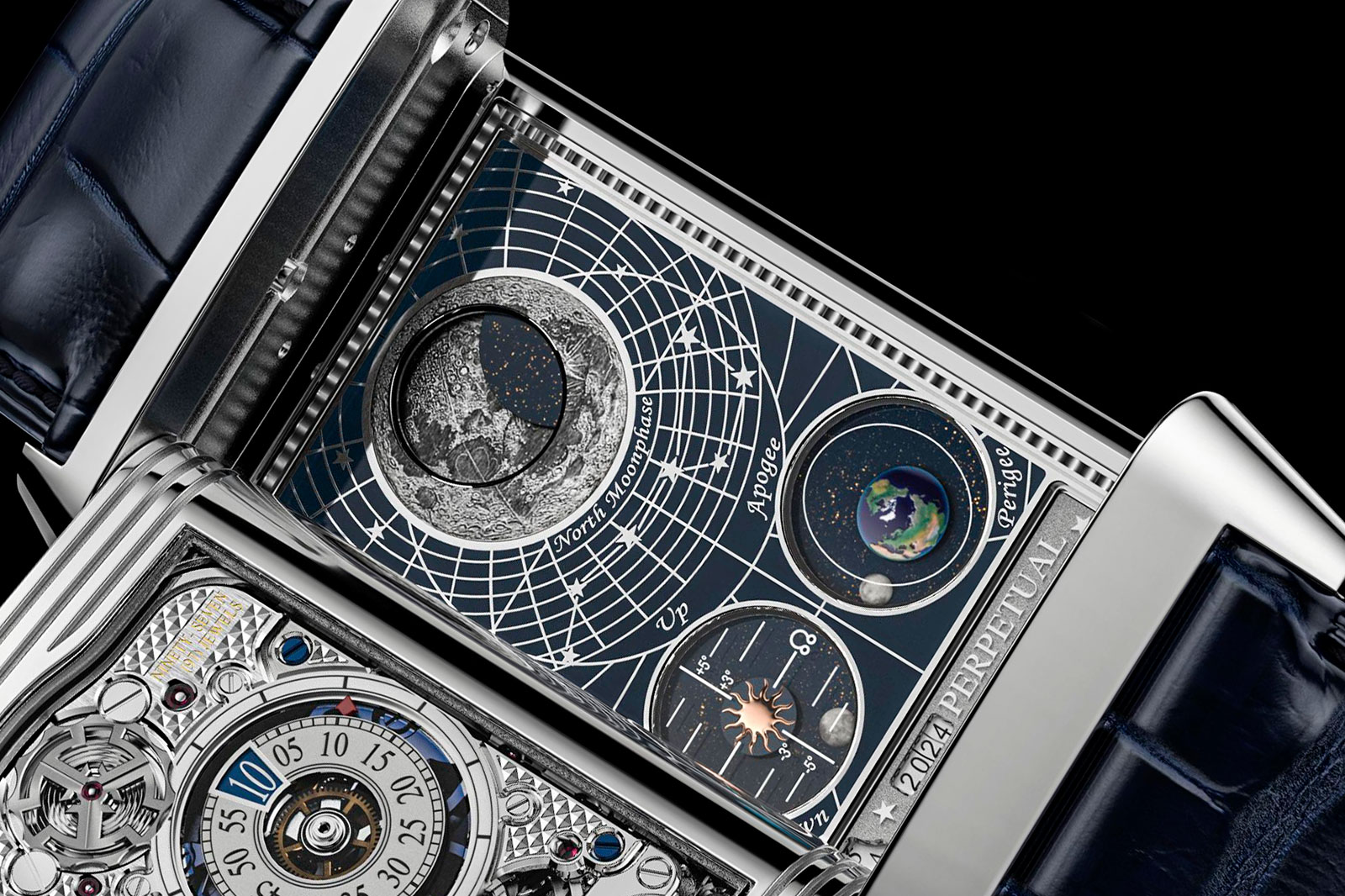 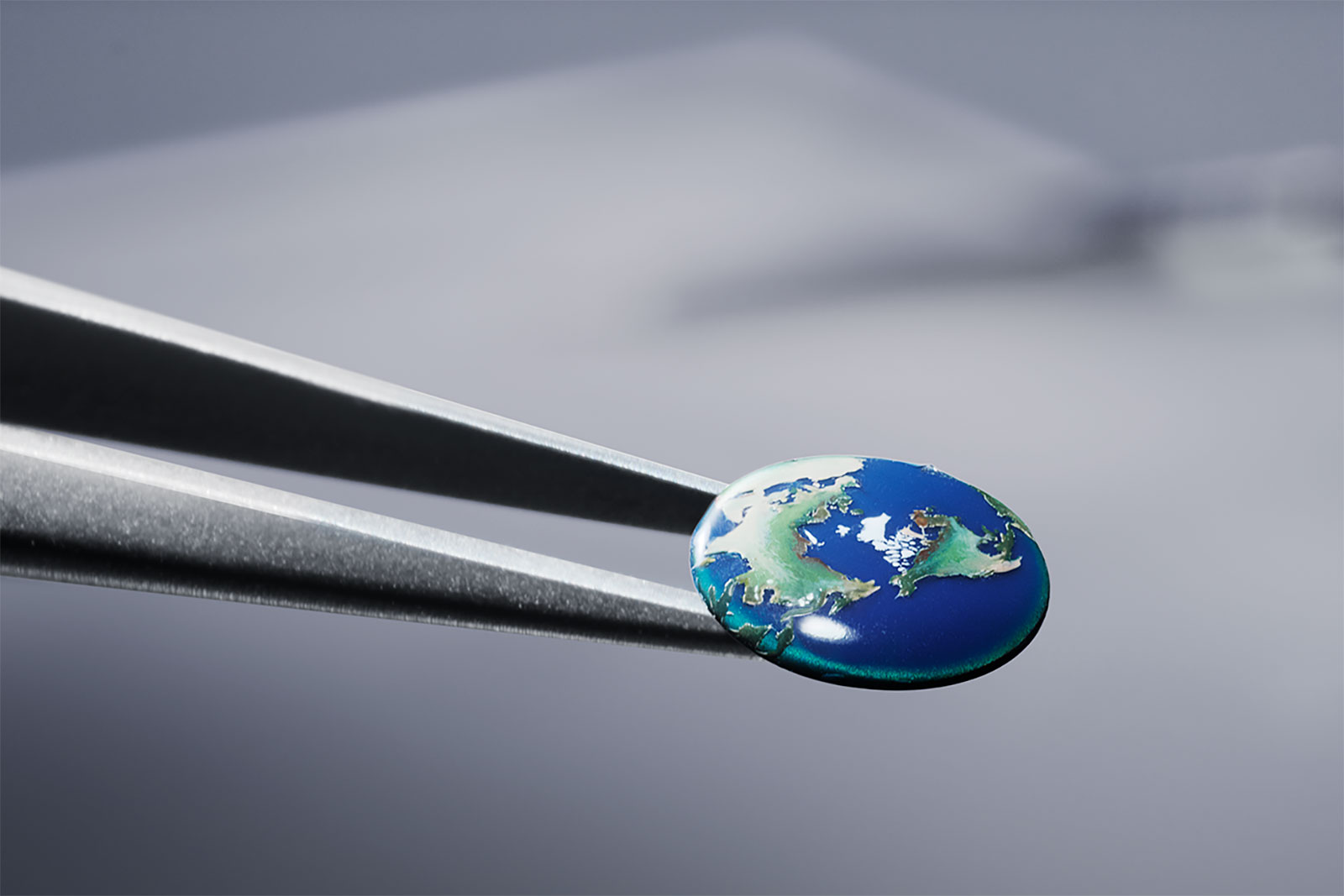 The tiny, fire-enamelled globe of the anomalistic cycle indicator

The secret to the connection between the two sections of the movement is just as it was in the Triptyque (which was similarly constructed but with three faces instead of four).

A tiny pin located on the base of the case extends at midnight, triggering the astronomical mechanism within the cradle, moving all of the astronomical indications forward by one step. The pin is part of the perpetual calendar mechanism, and extends simultaneously with the calendar change over. Naturally, for the mechanism to work, the case has to be secured in the cradle (on either side). 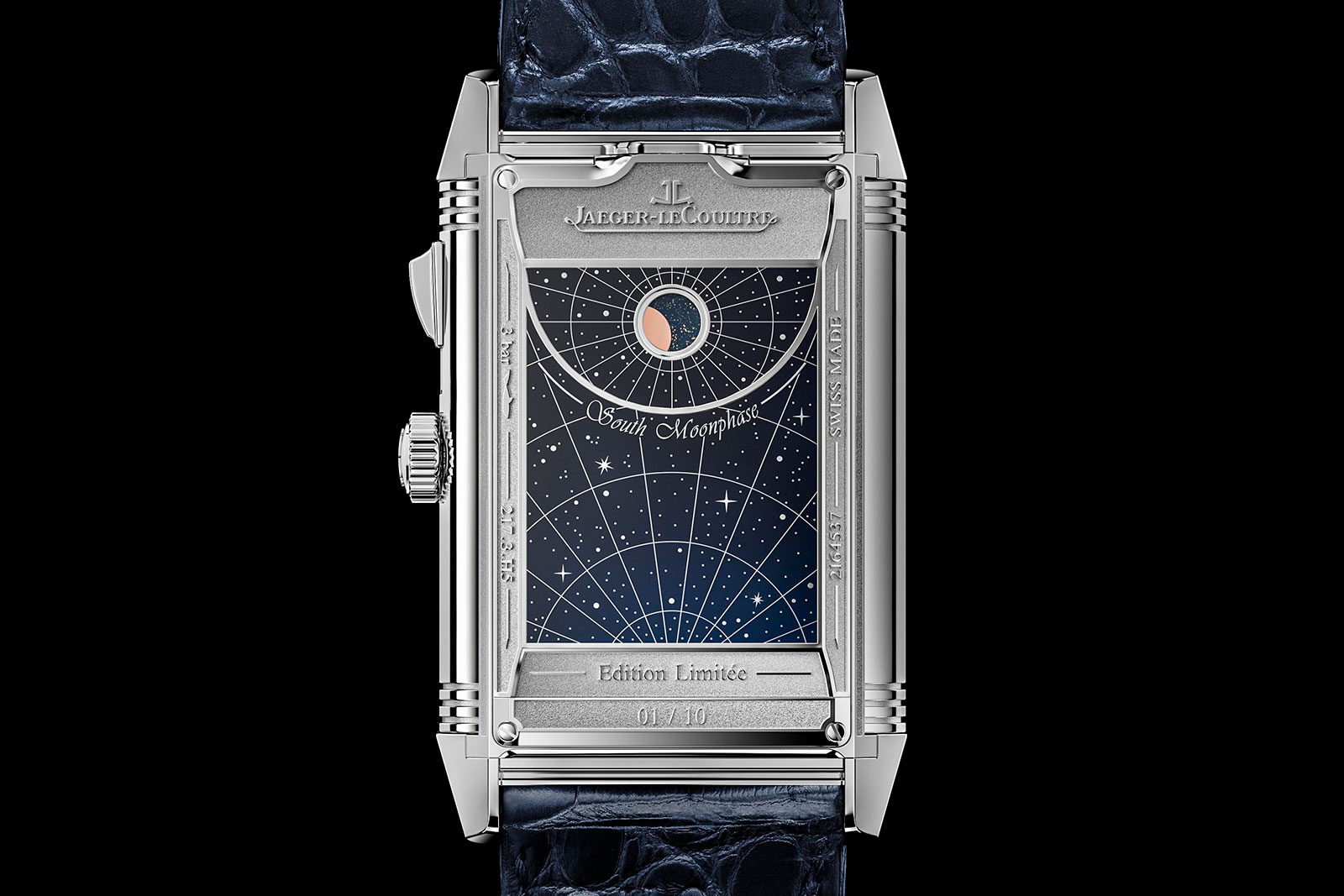 Visually, the Calibre 185 Quadriptyque departs from earlier JLC grand complications. It is dominated by hobnail guilloche – done by hand the traditional way with a straight-line engine – accented with blued steel components like the hands and screws, giving it a metallic, slightly industrial feel that gives the Calibre 185 a more modern aesthetic.

Importantly, the watch is delivered with a box that incorporates a smart setting mechanism to set all of the calendar and astronomical functions of the watch. 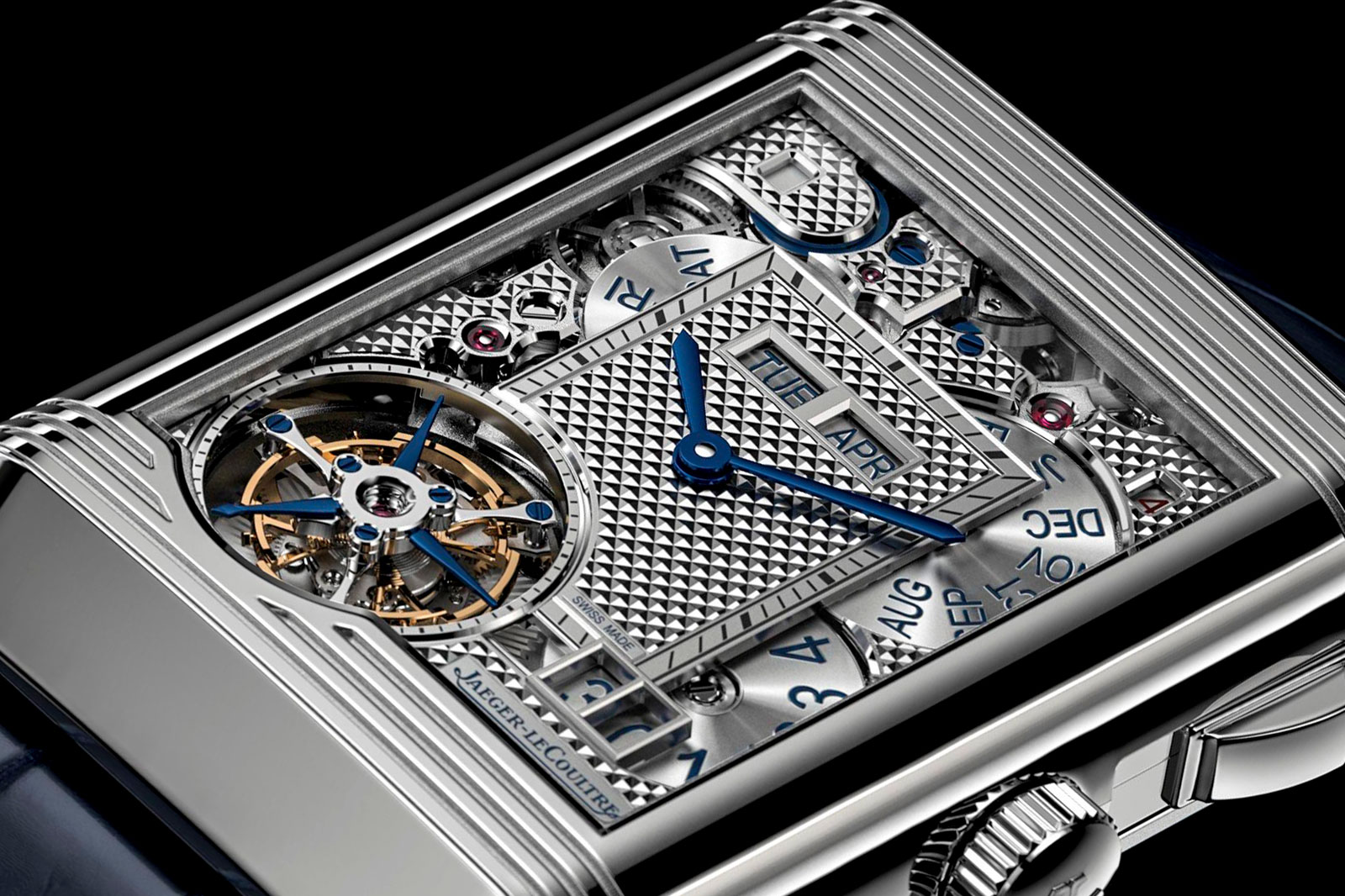 Limited edition: 10 pieces
Availability: On order at boutiques and retailers
Price: €1.35m, or about US$1.60m