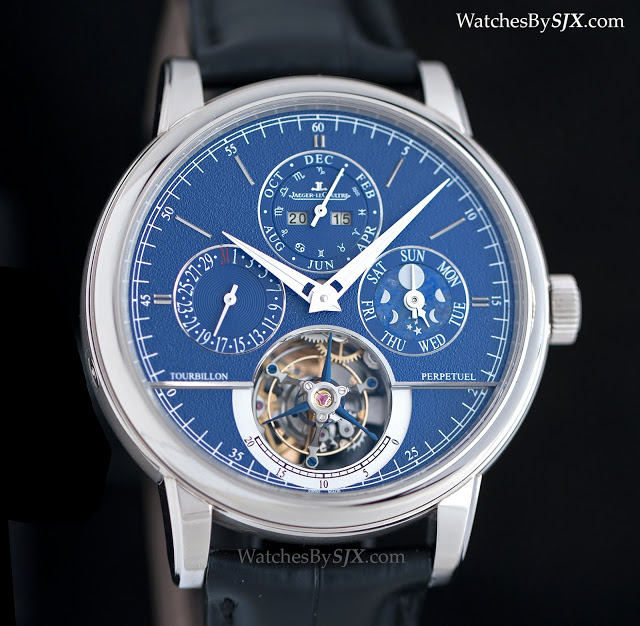 Jaeger-LeCoultre tends to iterate its complicated movements over several years, introducing new versions every so often. The Master Grande Tradition Tourbillon Cylindrique à Quantième Perpétuel, referred to as MGTTCQP from now on, is now available in several variants since being introduced in2013 for the 180th anniversary of Antoine LeCoultre setting up shop Le Sentier. The latest was unveiled at SIHH 2015, featuring a grained blue dial with a touch of lapis lazuli. While the original 180th anniversary MGTTCQP was a limited edition in platinum, the latest version is in white gold and part of the regular collection. The case is the same 42mm in diameter and the dial has the same grained texture as the other versions of this watch, except it is in a vivid blue. The calendar layout is conventional, with three sub-dials for the date, month, day and moon phase. The four digit date at 12 o’clock is unusual, but common to both Jaeger-LeCoultre and IWC (the feature was developed in the nineties when both were part of LMH). A notable detail is the moon phase display, which is a tiny disc of lapis lazuli. Hardly discernible at a distance, the nuances of the semiprecious stone only become apparent up close. The tourbillon functions like an ordinary one minute tourbillon, with its cage making one revolution every 60 seconds. But instead of an ordinary flat hairspring, it has a cylindrical hairspring, something first used by Jaeger-LeCoultre on the Gyrotourbillon 2, and also to be found in Vacheron Constantin’s upcoming record breaking, ultra-complication. Historically found in marine chronometers, a cylindrical or helical hairspring is coiled vertically, forming a cylinder. Its form ensures the hairspring’s centre of gravity is at the center of the balance wheel. In theory that improves timekeeping, but after marine chronometers become obsolete such hairsprings disappeared until making a reappearance in high-end tourbillons recently.

Whether the cylindrical hairspring offers any significant improvements in timekeeping is a matter of debate, but it certainly is visually compelling. Its height requires the titanium tourbillon cage to be correspondingly higher, leaving it standing some distance from the plane of dial. While in action the tourbillon is a treat to observe, especially since the dial is stepped, with the lower portion recessed to highlight the tourbillon.

The view from the back is more conventional, with the 18k rose gold rotor decorated with a relief of a gold medal Jaeger-LeCoultre won at the 1889 Universal Exposition in Paris. The manufacture has mastered the art of creating finely decorated, complicated movements on a relatively large scale, with this being a good example of that prowess. Typical of other Jaeger-LeCoultre movements, the calibre 985 is decorated attractively, with sun ray striping on the bridges, blued steel screws and gilded, engraved text. The Master Grande Tradition Tourbillon Cylindrique à Quantième Perpétuel in blue retails for S$190,000 in Singapore, with US retail approximately US$140,000.