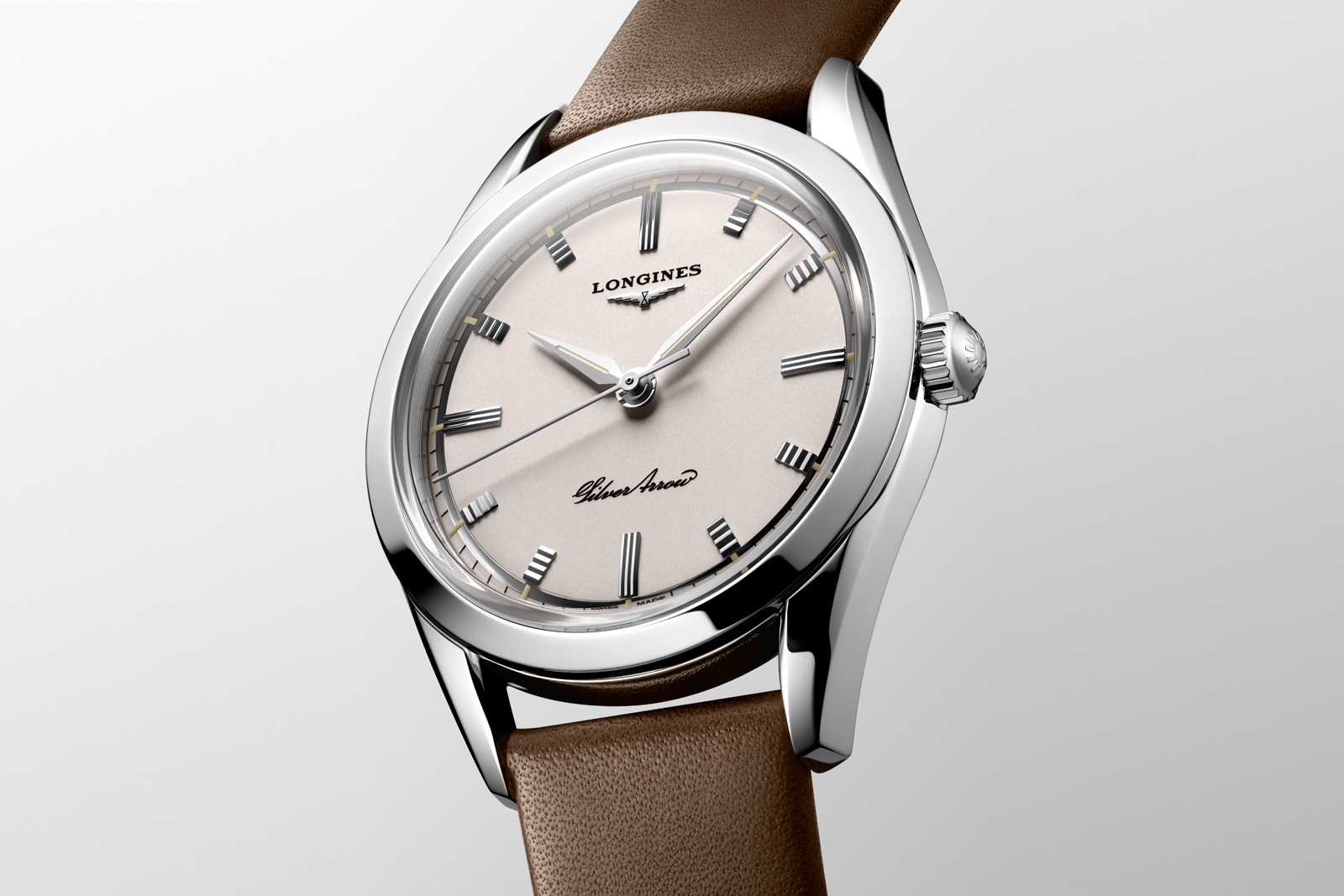 Named after the aluminium-bodied Mercedes-Benz Formula 1 cars of the 1950s, the Longines Silver Arrow was introduced in 1956. Typical of mid-20th century gentlemen’s watches, the Silver Arrow is a functional but elegant design with a discreet flourish in the form of fluted hour markers.

Notably, the Silver Arrow was first reproduced about a decade ago, but with a date and simpler execution all around. Now it returns as a more sophisticated remake that is far closer to the vintage original, but with a latest generation ETA movement equipped with a silicon hairspring. 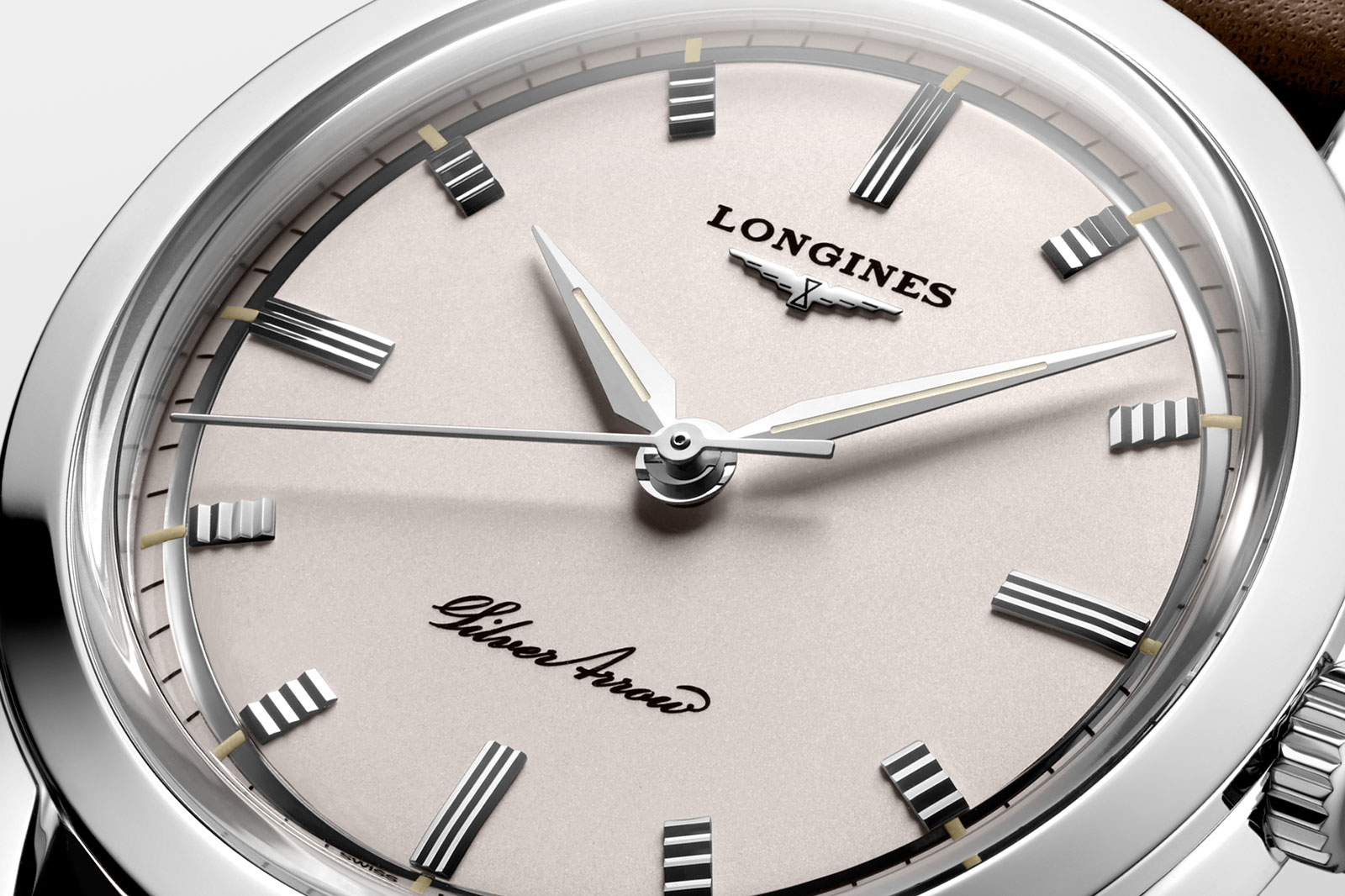 Like the brand’s other recent remakes, the Silver Arrow maintains the look and feel of the original, albeit enlarged as most reproductions are. The dial has the details of the original, as does the thin case and even the crown.

Longines’ Heritage remakes are often modelled on military-issue or sports watches, resulting in a strongly utilitarian aesthetic. The Silver Arrow is different, offering another look while still preserving the strong value of Longines’ historical remakes. Priced at US$2,100, the Silver Arrow will be difficult to beat in terms of classical watches in its price segment. 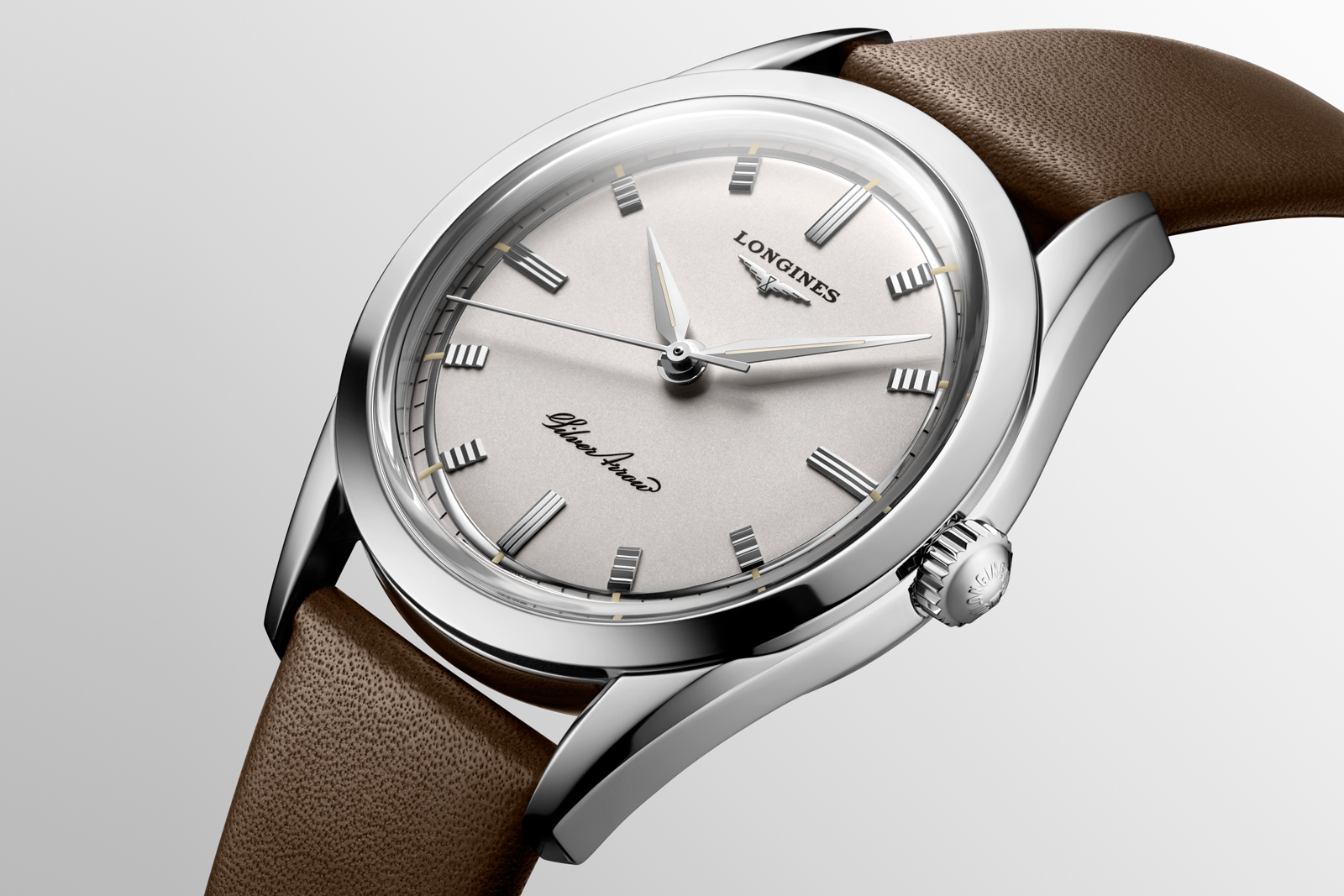 The silver dial features unusual, fluted indices just like the vintage original. That, along with the sword hands and correct typography create a faithful replica of the 1956 Silver Arrow. 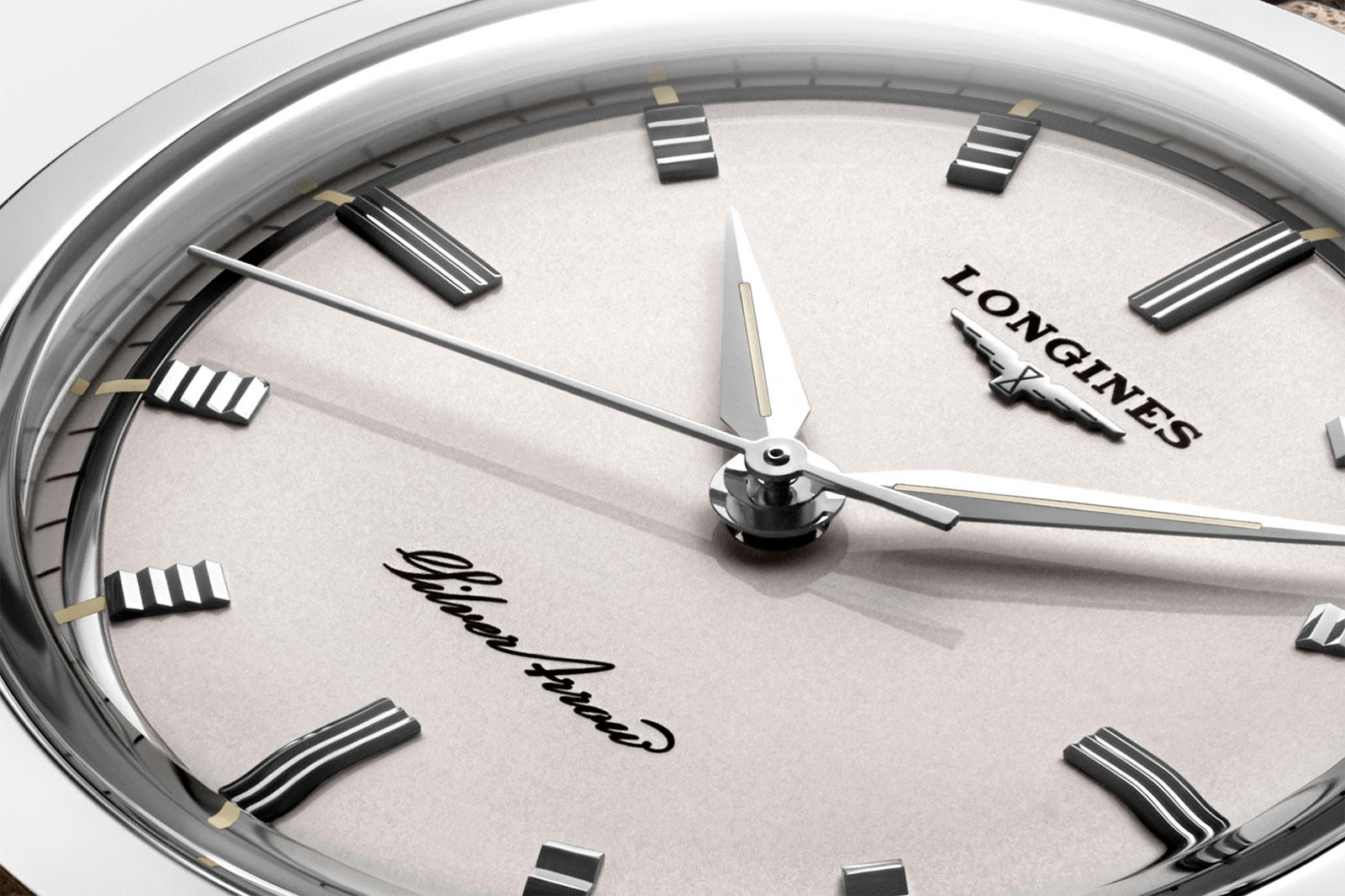 As is standard practice, the remake is larger than the original, although the new Silver Arrow is still a modest 38.5 mm in diameter, compact by modern standards. And it is also slim at just 9.90 mm high.

Besides modern taste for larger watches, the larger size is due to the L888.5 movement within, which is a heavily upgraded ETA 2892. It boasts a 72-hour power reserve, instead of the 42 hours of a stock 2892.

The L888.5 movement beats at 3.5 Hz – as opposed to the convention 3 or 4 Hz – the norm for most latest-generation movements of brands owned by Swatch Group, which also includes Omega and Tissot. And most of these recent calibres also feature silicon hairsprings, as the L888.5 does, which gives it five-year warranty instead of the usual two. 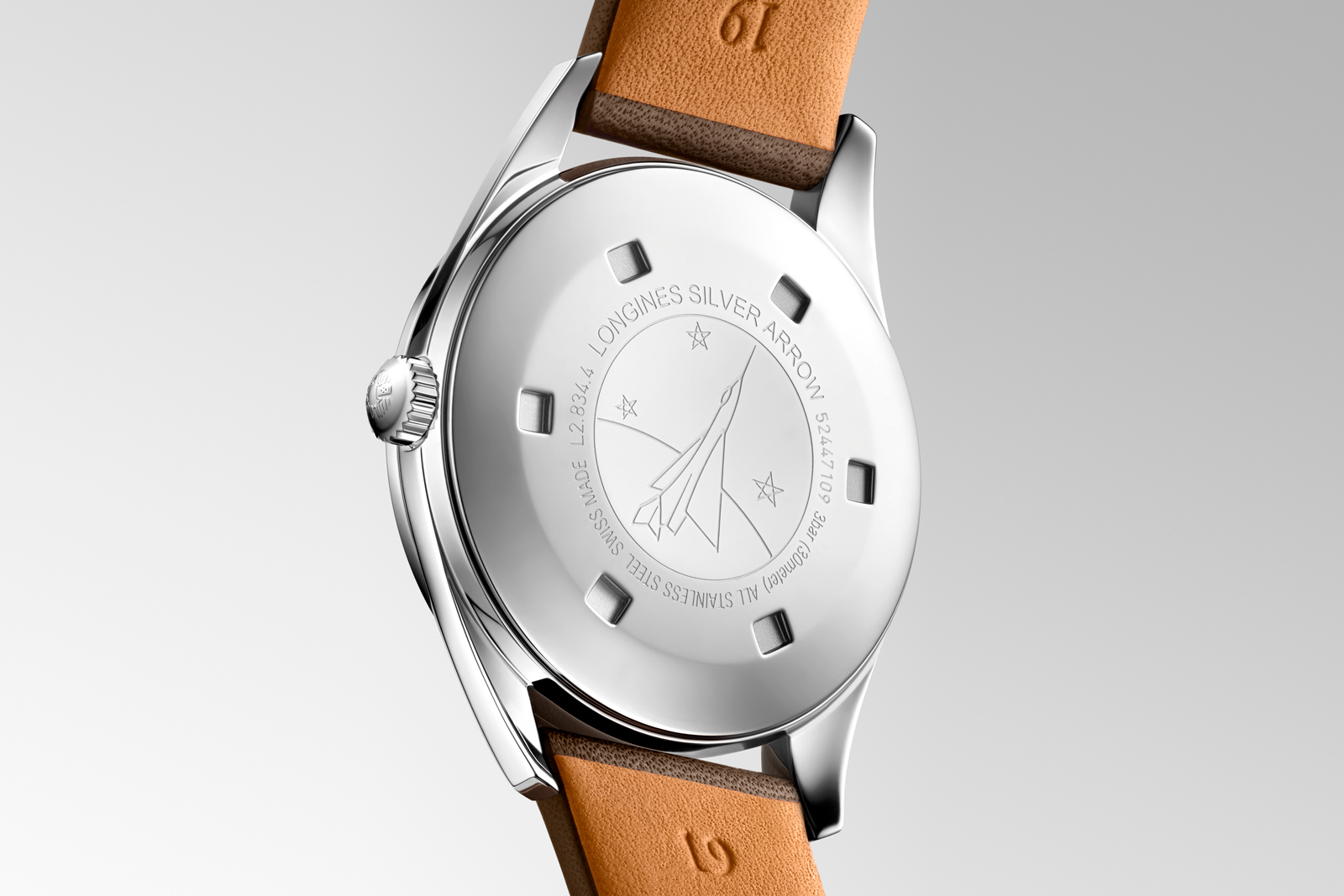 Correction February 11, 2021: The 3.5 Hz frequency of the balance is common in latest-generation Longines (and ETA) movements, and not only movements with a silicon hairspring.

Correction February 15, 2021: The power reserve is 72 hours, and not 64 as stated in an earlier version of the article.