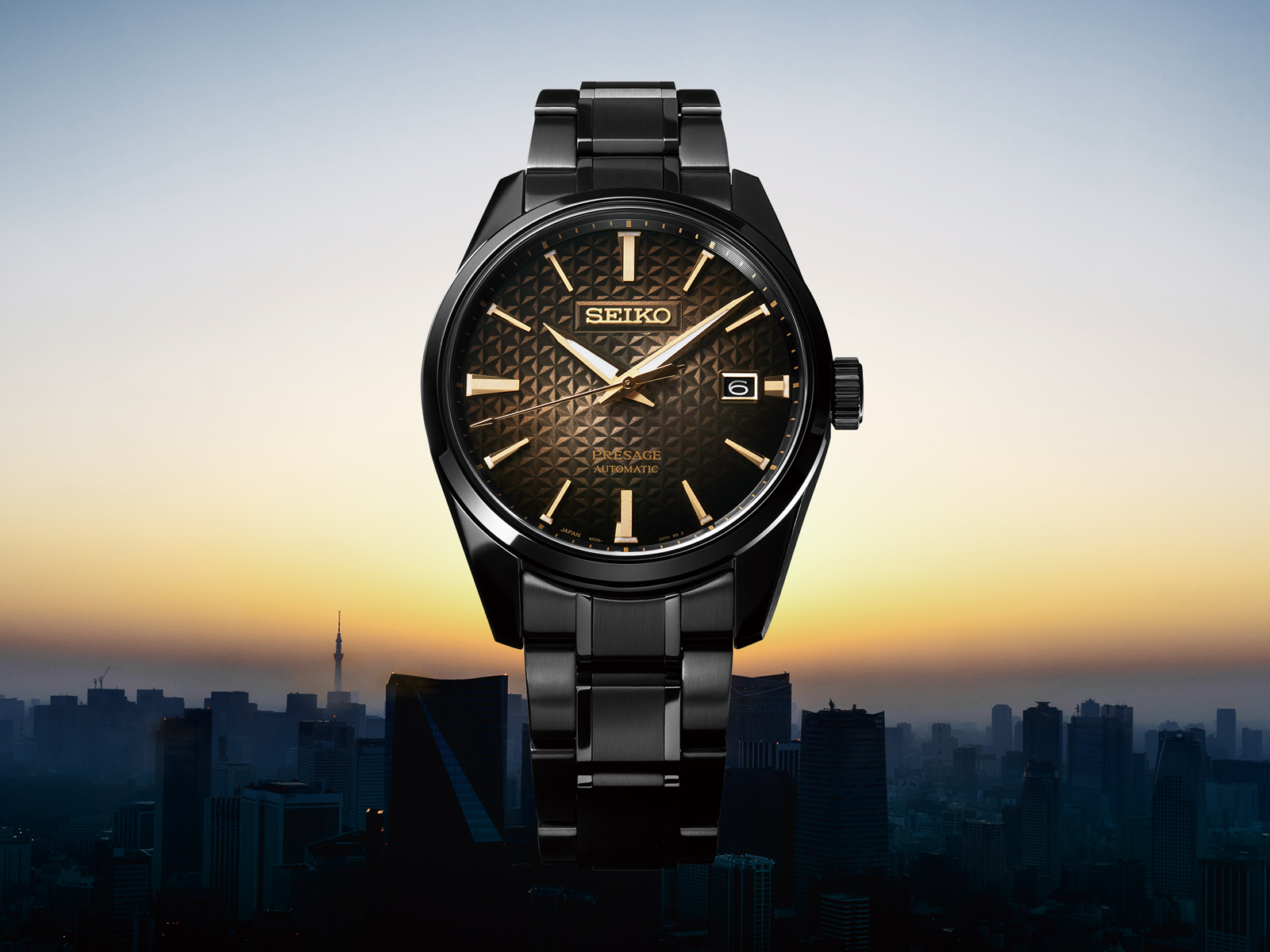 With Seiko marking its 140th anniversary in 2021, a slew of commemorative editions are expected – the brand already got the ball rolling last year with a King Seiko and Grand Seiko. Now the anniversary line up gets something more affordable, the Presage Sharp Edged Series 140th Anniversary (SPB205).

Limited to 4,000 pieces, the SPB205 is inspired by dawn in Tokyo, explaining the gold highlights on the dial set against an all-black case and bracelet, a first for the Presage series, which typically sticks to more traditional polished steel. 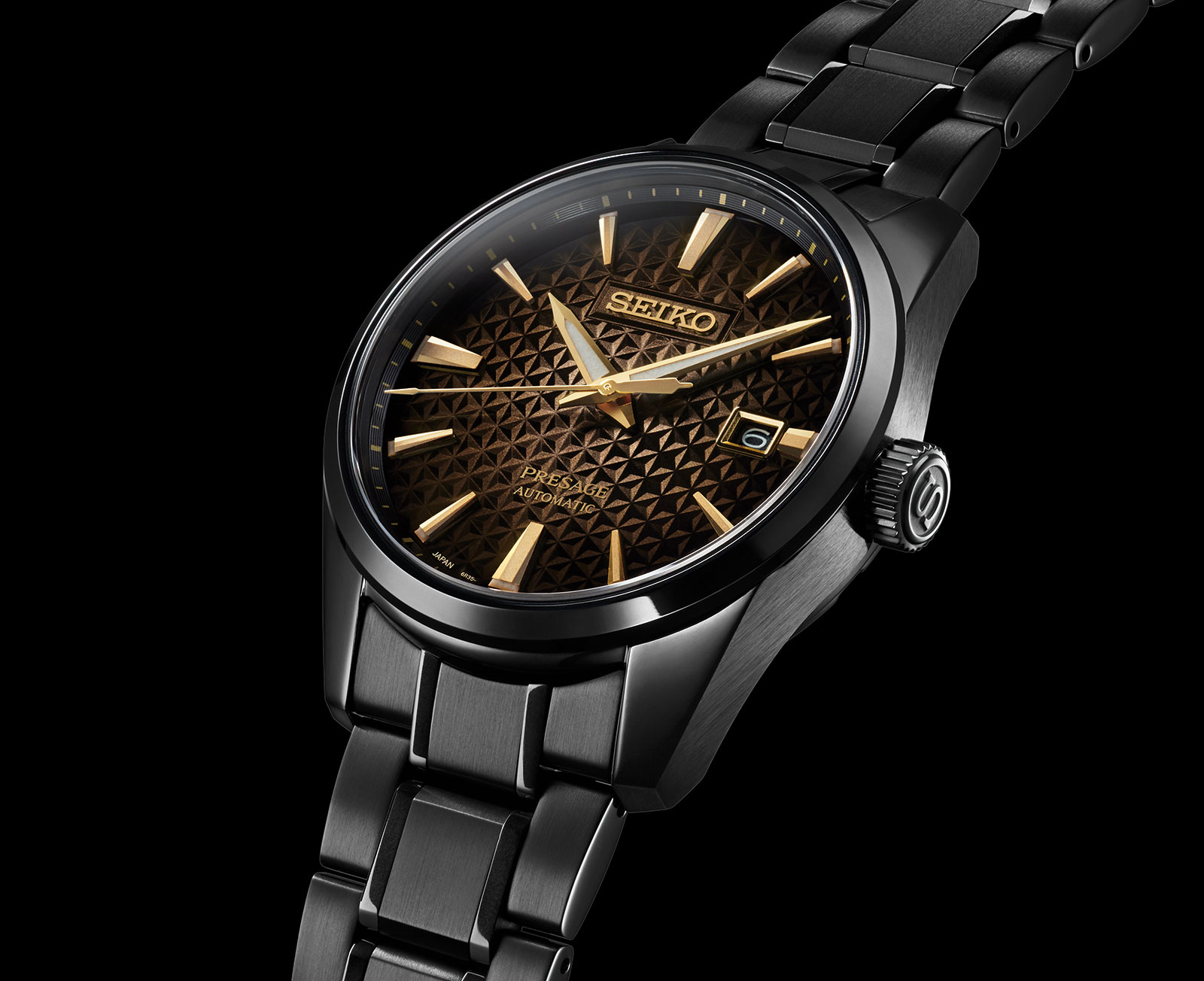 The Presage line is well liked for its variety of intriguing dial finishes at affordable prices. One of its sub-lines, the Sharp Edged Series, features a motif known as asanoha – which translates as “hemp leaf” – a geometric pattern traditionally found on clothing, that shimmers in the light thanks to its textured surface.

The SPB205 might just be the most striking of the series to date. The gold indices and hands contrast beautifully against the graduated, brown-black dial, which adds a layer of subtlety to the asanoha texture, unlike earlier models featuring more obvious renditions in brighter colours. 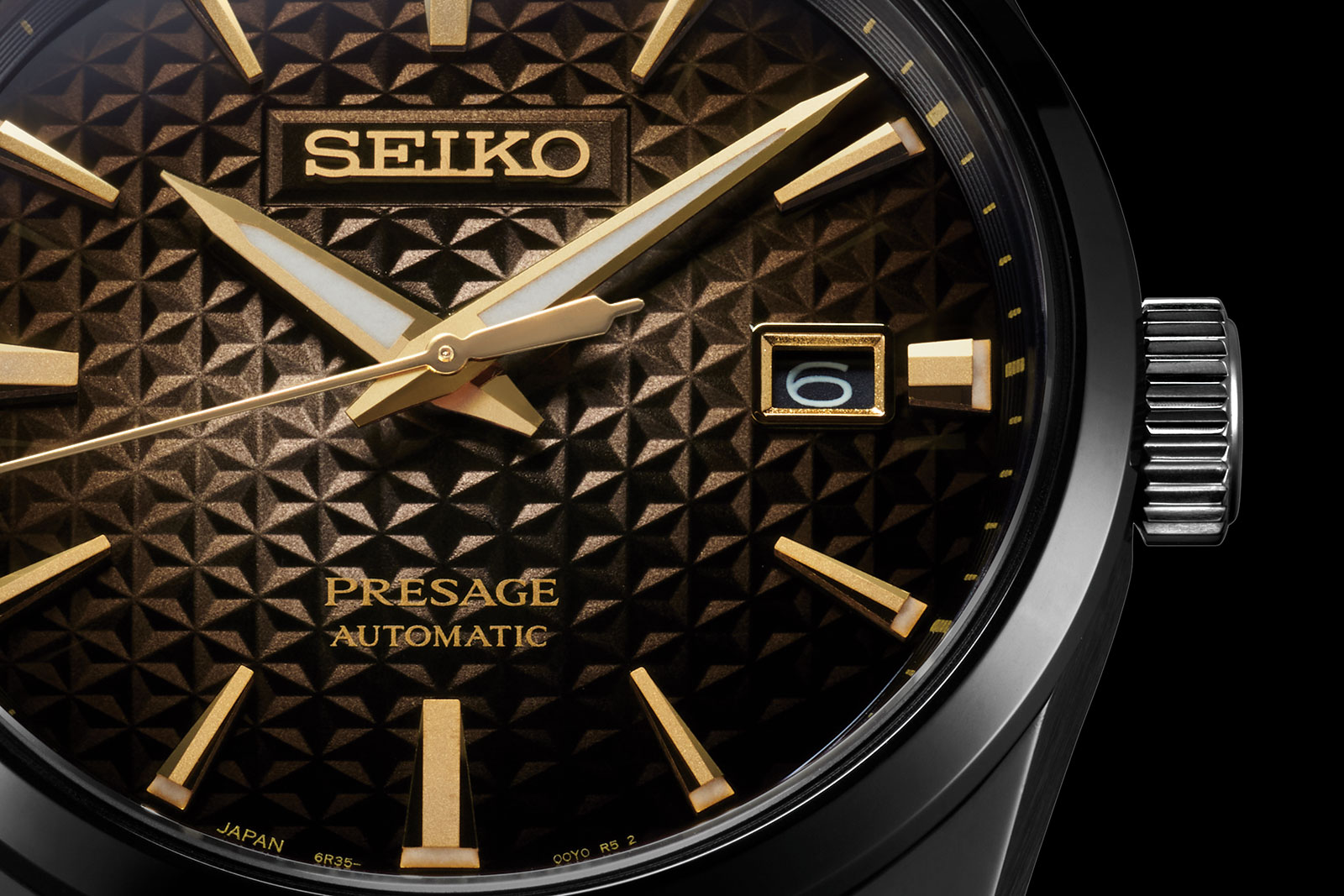 With its wide lugs and contrast finish on the bracelet, the SPB205 bears more than a passing resemblance to pricier Grand Seiko models. But it has a price tag of US$1,150, making the SPB205 compelling as a package – the dial, finishing, and blacked-out case.

Though priced US$150 higher than the earlier versions of the Presage Sharp Edged, its unusual blacked-out aesthetic is worth the extra. While the typical Presage model has a traditional, slightly formal style, the all-black finish gives the SPB205 a slightly more sporty feel, which might appeal to younger watch enthusiasts, who will surely appreciate its affordability as well.

That said, with Seiko’s preference for introducing multiple-but-similar variations of successful models, the novelty of this all-black look might not last too long.

As the name suggests, the Sharp Edged Series has an angular case that brings to mind “Grammar of Design”, Seiko’s house style developed in the 1960s for Grand Seiko. Its dimensions are well proportioned and easy wearable at 39.3 mm by 11.1 mm, which will suit to range of wrists. 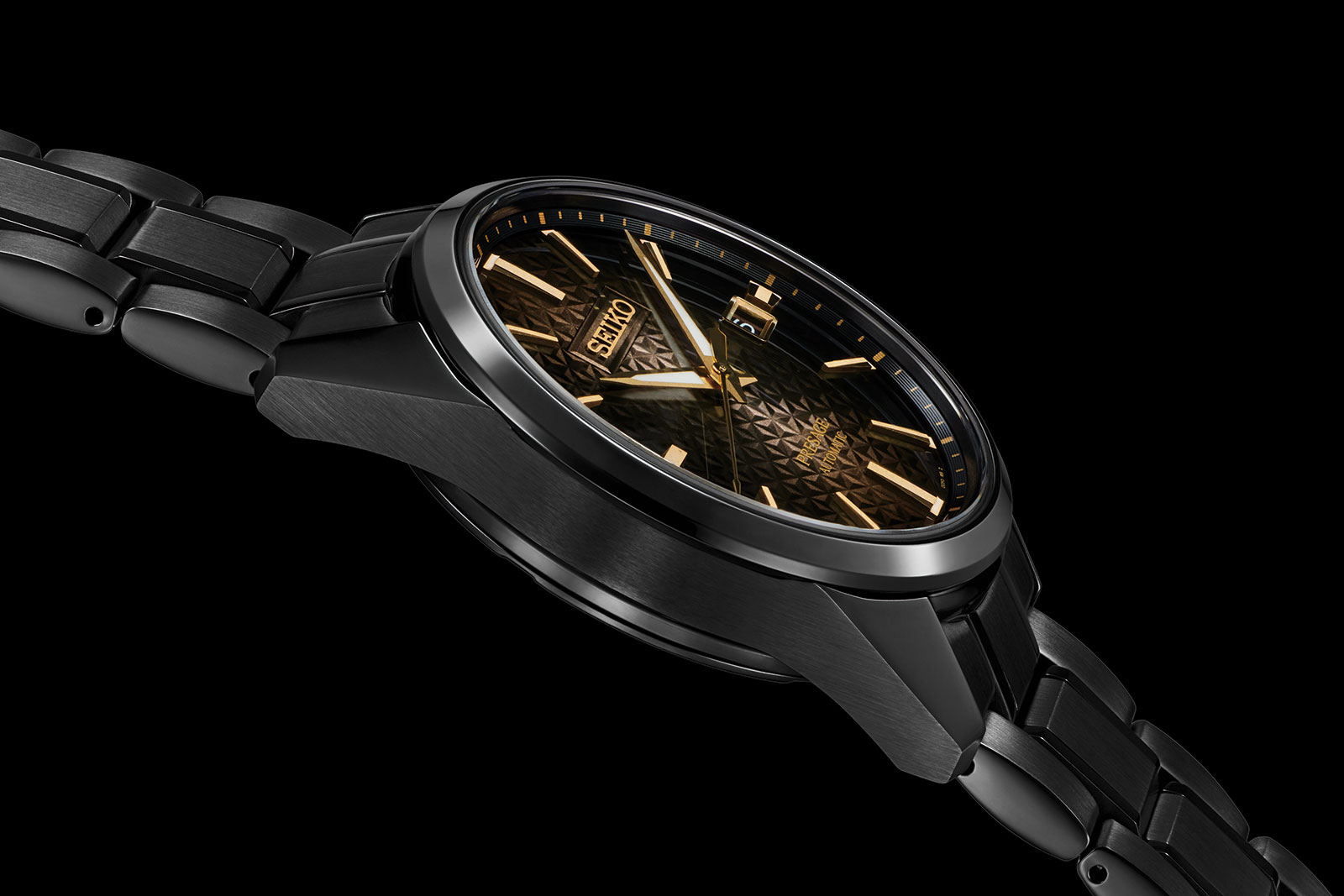 The blacked-out case and bracelet, a first for the Presage, is the highlight. They are finished with a “super-hard black coating” that Seiko doesn’t describe, but is likely similar to diamond-like carbon (DLC). And like the rest of the Presage line, the SPB205 is powered by the reliable 6R35, an automatic workhorse that’s often found in Seiko’s mid-range watches. 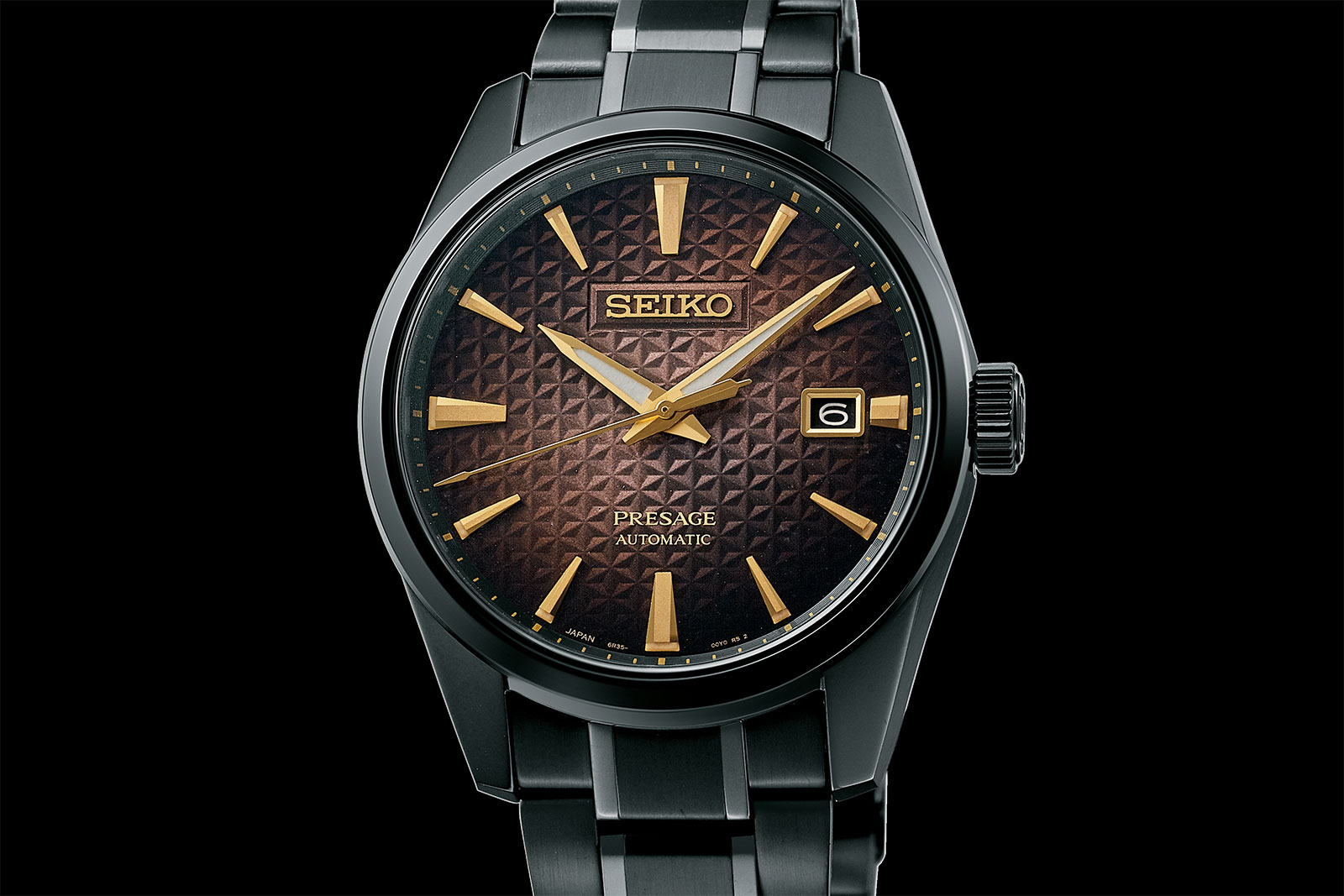 Limited edition: 4000 watches
Availability: From February at Seiko boutiques and retailers
Price: US$1150

A new case and dial design.