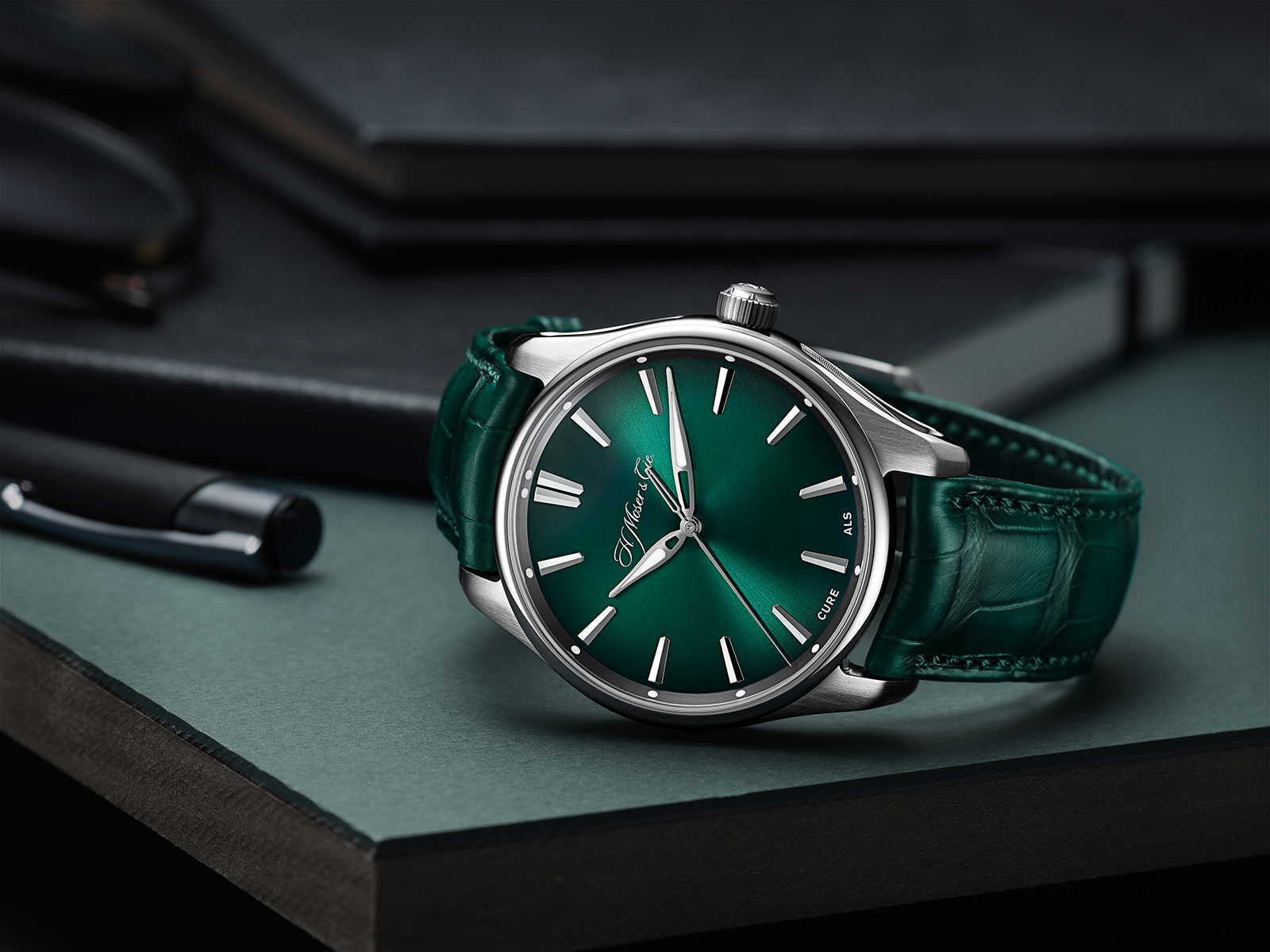 H. Moser & Cie. has given its elegant take on the sports watch striking green livery in support of a good cause. The Pioneer “Cure ALS” is essentially an incentive for donations to Duke University’s research and treatment centre for amyotrophic lateral sclerosis (ALS), an incurable muscle-weakening disease – making the respective minimum-required donation gets you either of the two limited-edition watches.

Both watches features the brand’s signature fume dials in striking, deep green. One is a simple three-hand watch, while the other is equipped with a flying tourbillon containing an impressive double-hairspring. 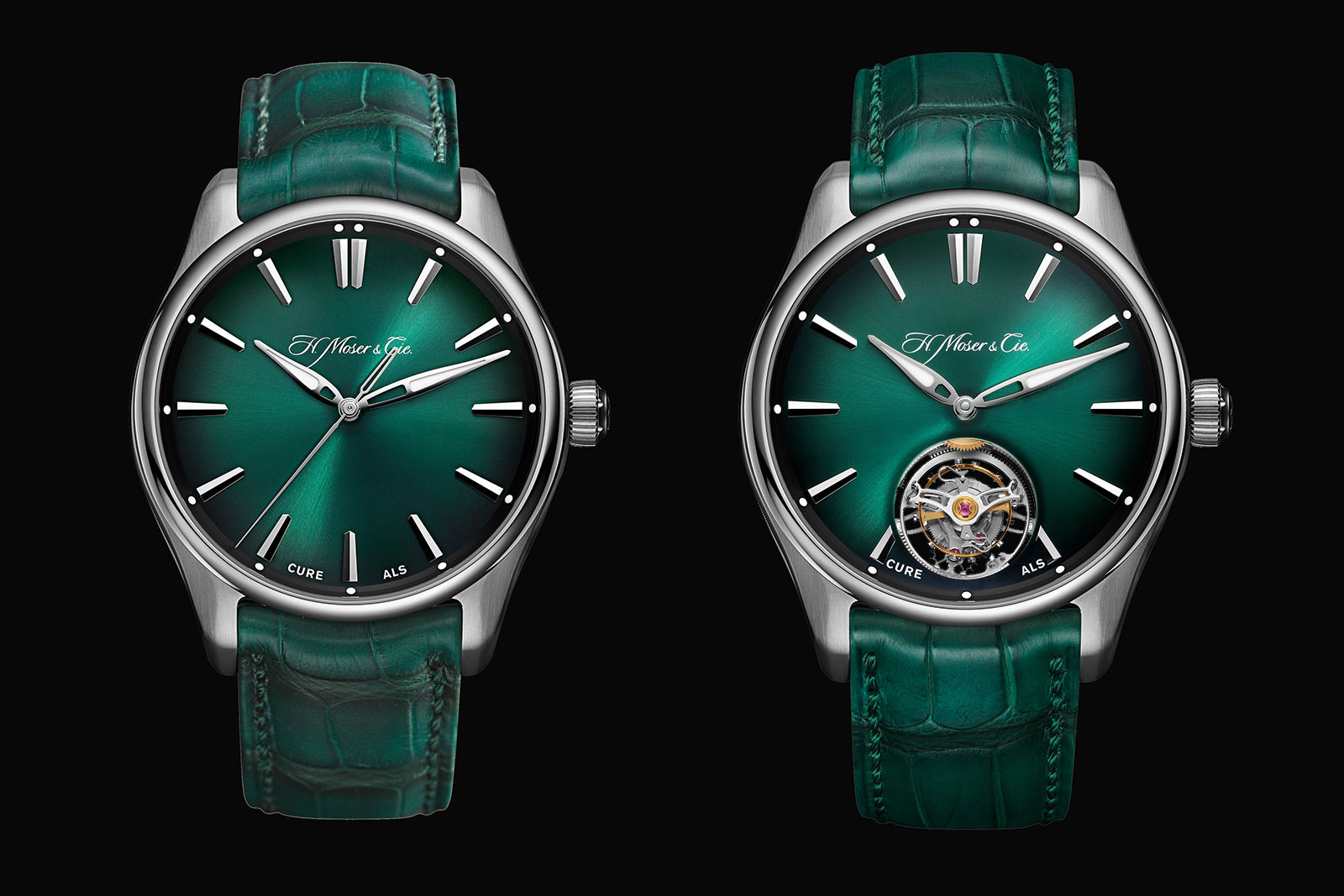 Watches created to benefit good causes are heartening, particularly ones like the new Pioneer pair, where the entirety of the donation goes to the medical programme. Already an appealing watch, the Pioneer features many quintessential Moser characteristics – namely the dial finish and in-house movements – and is enhanced by its charitable nature.

The brand’s most affordable steel sports watch, the Pioneer Centre Second “Cure ALS” features an upgrade over the ordinary version in the form of an 18k solid-gold rotor that replaces the standard tungsten rotor. However, design wise it is a bit too close to a standard model – the green dial is similar to that in the regular production variant, which is available in a different, but similar, shade of green. 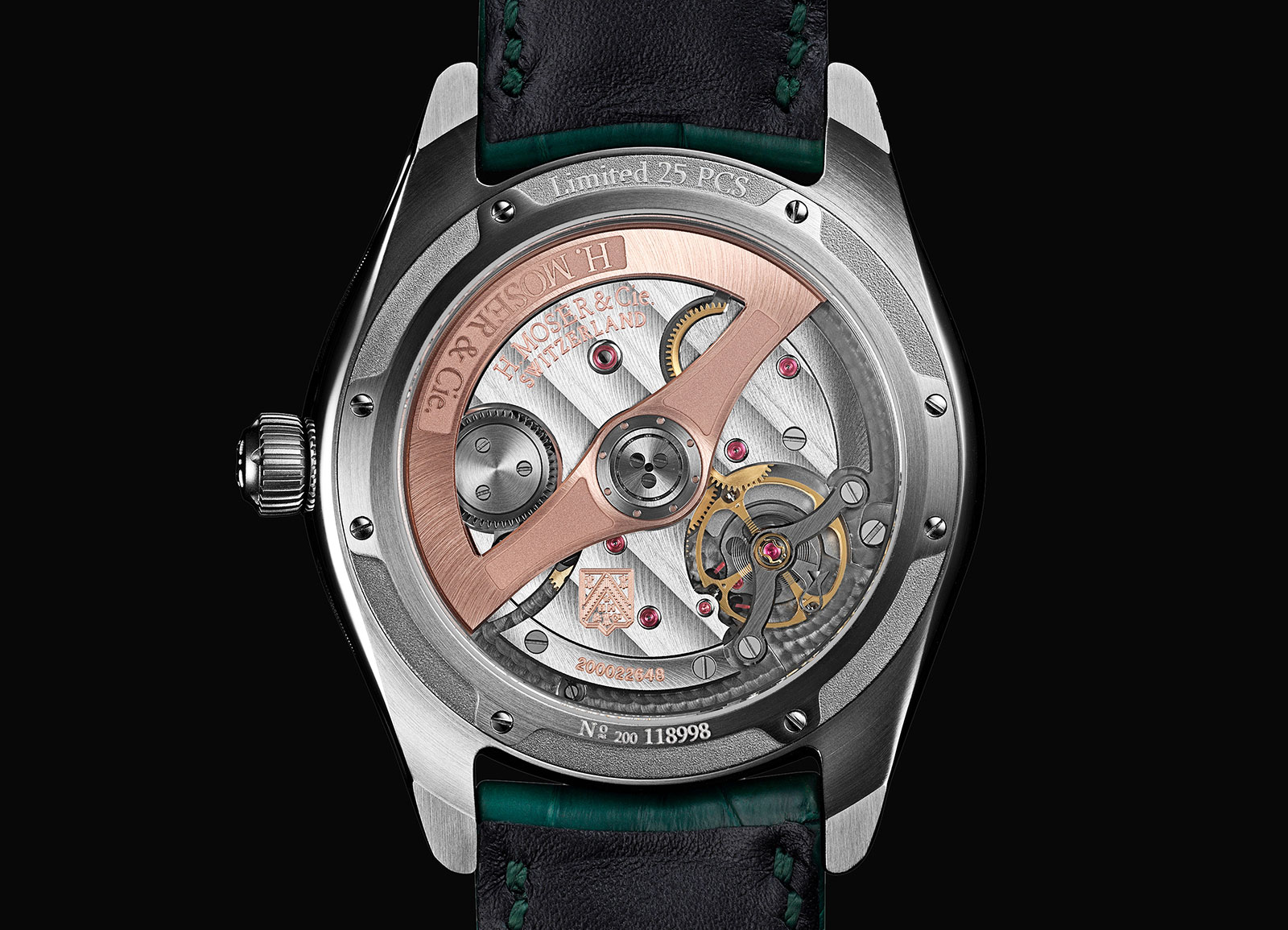 The Pioneer Tourbillon is more special, because the green dial is not found on the earlier versions of the watch. More crucially, the Pioneer Tourbillon was never part of the regular collection in the first place – it was only launched as a limited edition – making the five-piece “Cure ALS” edition quite special, and arguably a more compelling buy than the Centre Second model, price notwithstanding.

And in typical Moser fashion, the pricing is fair, although the “price” here is actually the minimum donation to the Duke ALS programme: US$16,000 for the Centre Second, and US$55,000 for the Tourbillon. Each “Cure ALS” model is priced at about 10% over the equivalent standard model, but it’s a modest premium justified by the added features as well as the charity aspect.

A disease made prominent in popular culture by the Ice Bucket Challenge that went viral on social media in 2014, ALS is deadly and mysterious. The symptoms of ALS include weakening of muscles, which often leads to respiratory failure, making it eventually fatal. While a cure for the disease has yet to be found, treatment does exist to alleviate its symptoms.

Proceeds from the sale of these watches will go to the Duke ALS Clinic, a research centre as well as treatment centre for ALS patients that is part of the Duke University School of Medicine – purchasing the watch means making at least the minimum-required donation to the clinic. 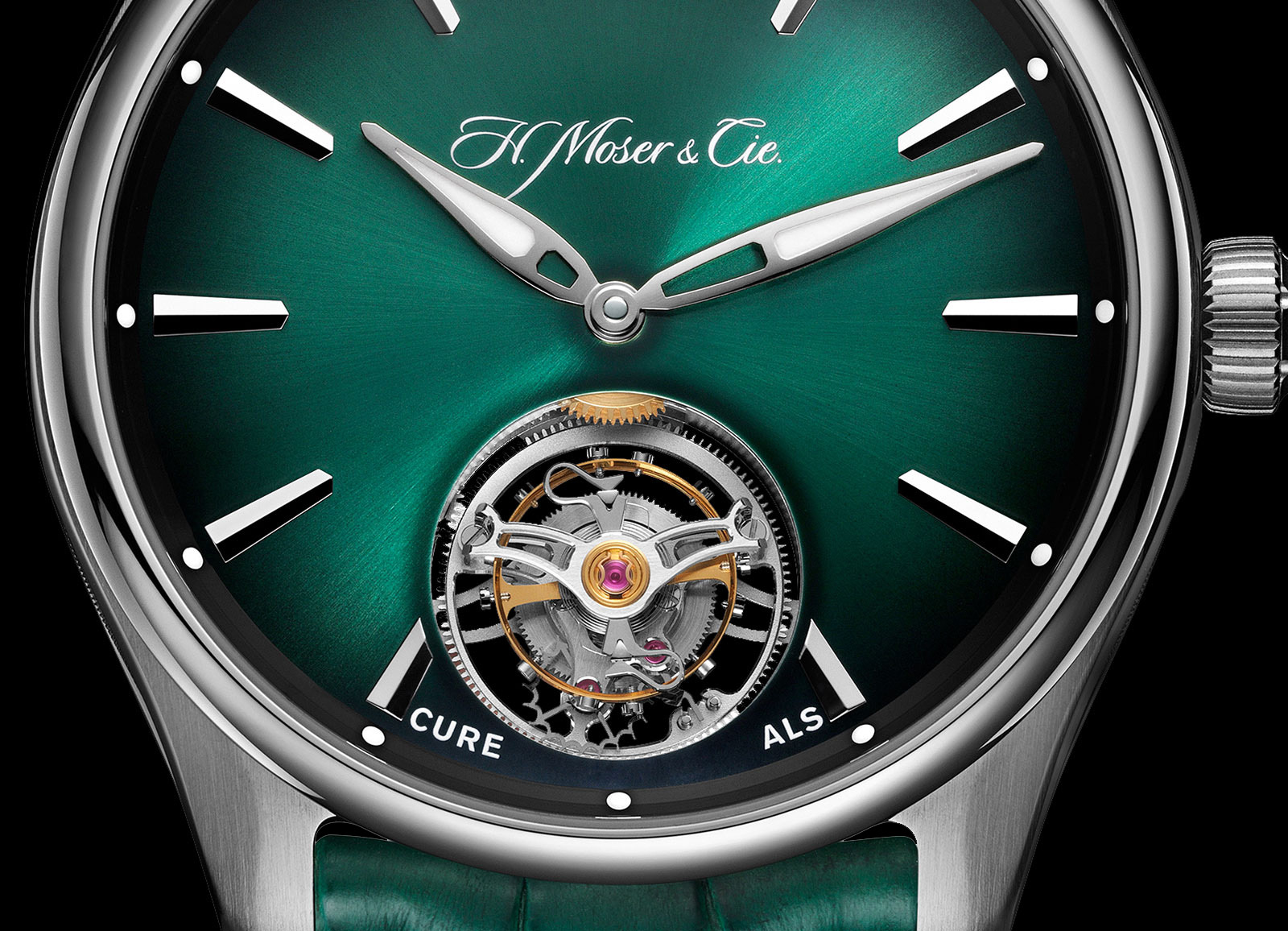 The “Cure ALS” watches were made possible by Loy Stewart, an American shipbuilding tycoon and watch collector who battled ALS for two decades. He worked with George Wendt to design the two watches, but unfortunately succumbed to the disease last year, before the project was realised.

Less obviously a sports watch than the Streamliner with its integrated bracelet, the Pioneer is still a fully-capable sports watch with screw-down crown and water resistance of 120 m. Both “Cure ALS” models have the same largish case with recesses decorated with vertical fluting, evoking vents in a car.

The Pioneer Centre Second has a clean, legible dial, as well as the in-house cal. HMC 200. While the movement is largely finished by machine, it is appealing and features Moser’s recognisable style, most notably in the alternating wide and narrow Geneva stripes and the V-shaped balance bridge.

And the Pioneer Tourbillon is essentially a more luxe version of the Centre Second. Its most interesting technical feature is the interchangeable tourbillon regulator, allowing the regulator to be exchanged for a new module during servicing, reducing the lead time.

And the tourbillon is no ordinary tourbillon, instead having a pair of balance springs mounted concentrically on the same staff, but in opposite directions, such that they average out each other’s positional errors as they “breathe”, improving timekeeping. 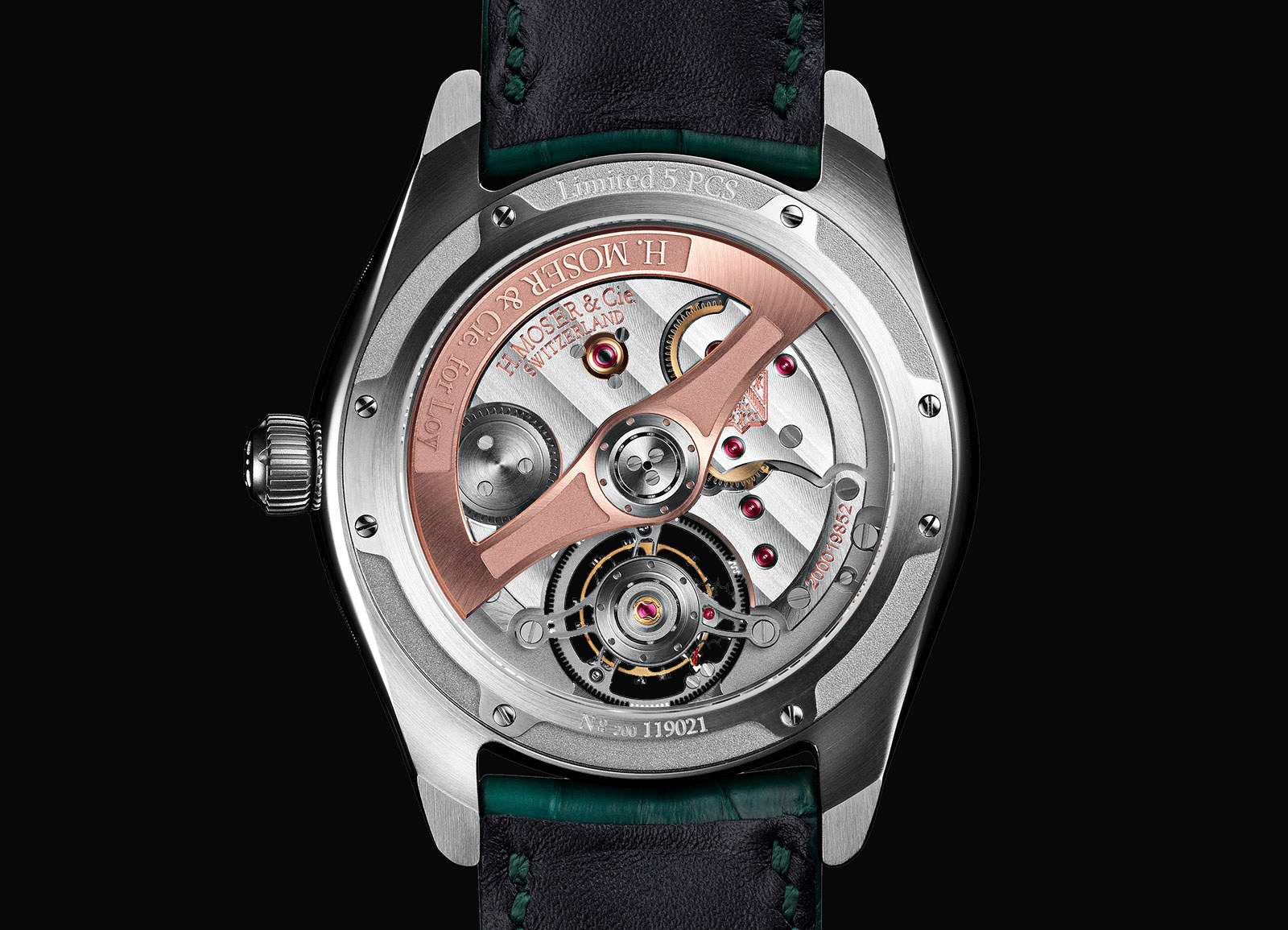 The HMC 804 of the Tourbillon