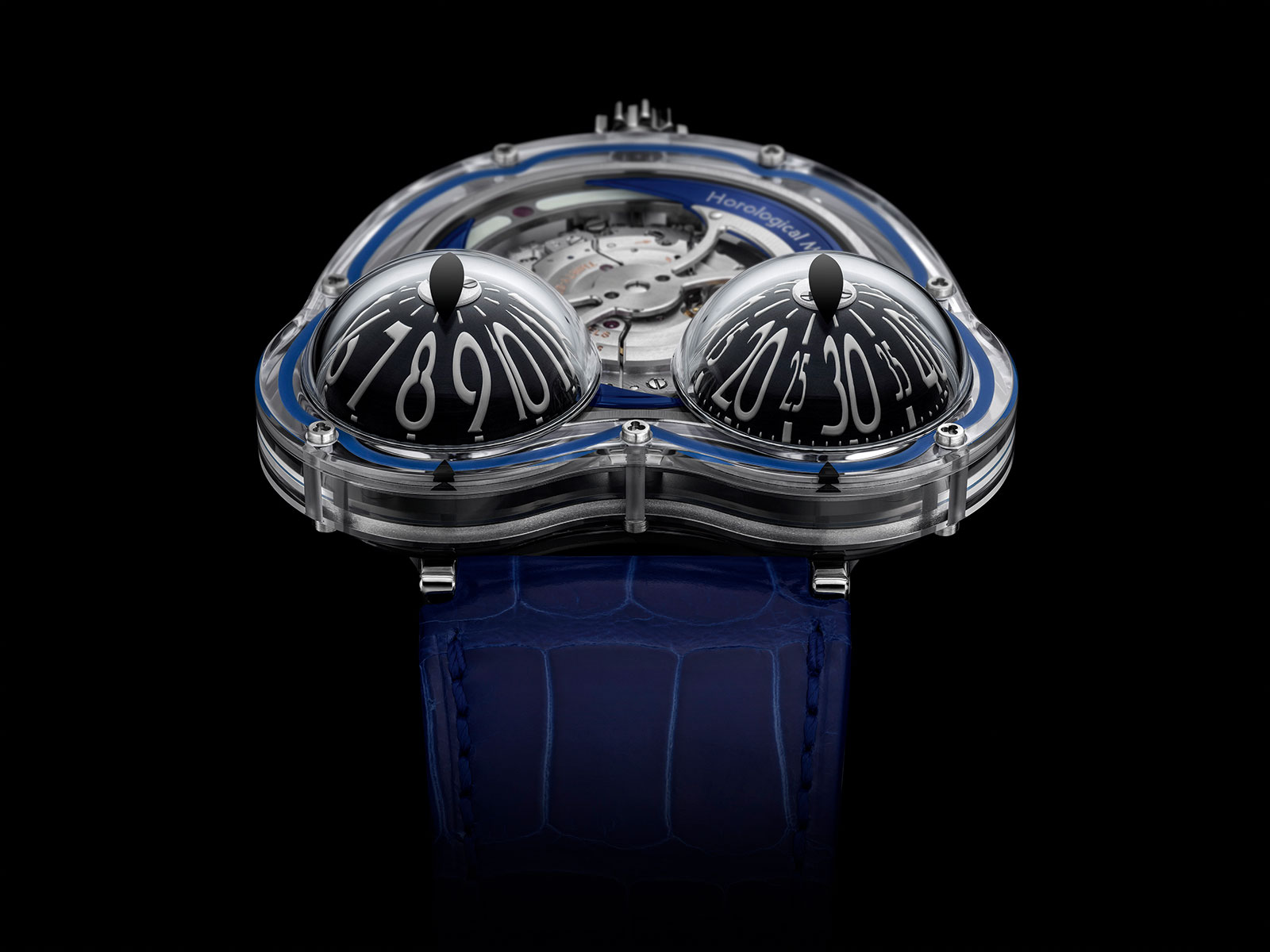 Launched in 2010, the bug-eyed HM3 Frog was perhaps the quintessential MB&F wristwatch during its five-year run, having been discontinued in 2015. Now it’s making a brief return for its 10th anniversary as the limited-edition HM3 Frog X – with a case made entirely of sapphire crystal.

Originally launched as the slightly robotic-looking Horological Machine No. 3 (HM3), the model evolved into the more organic Frog, which gained a pair of sapphire domes that made its instantly distinctive. Now MB&F has taken the idea even further: inspired by frogs with transparent skin according to MB&F, the HM3 Frog X is entirely clear and whimsically colourful in three different shades. 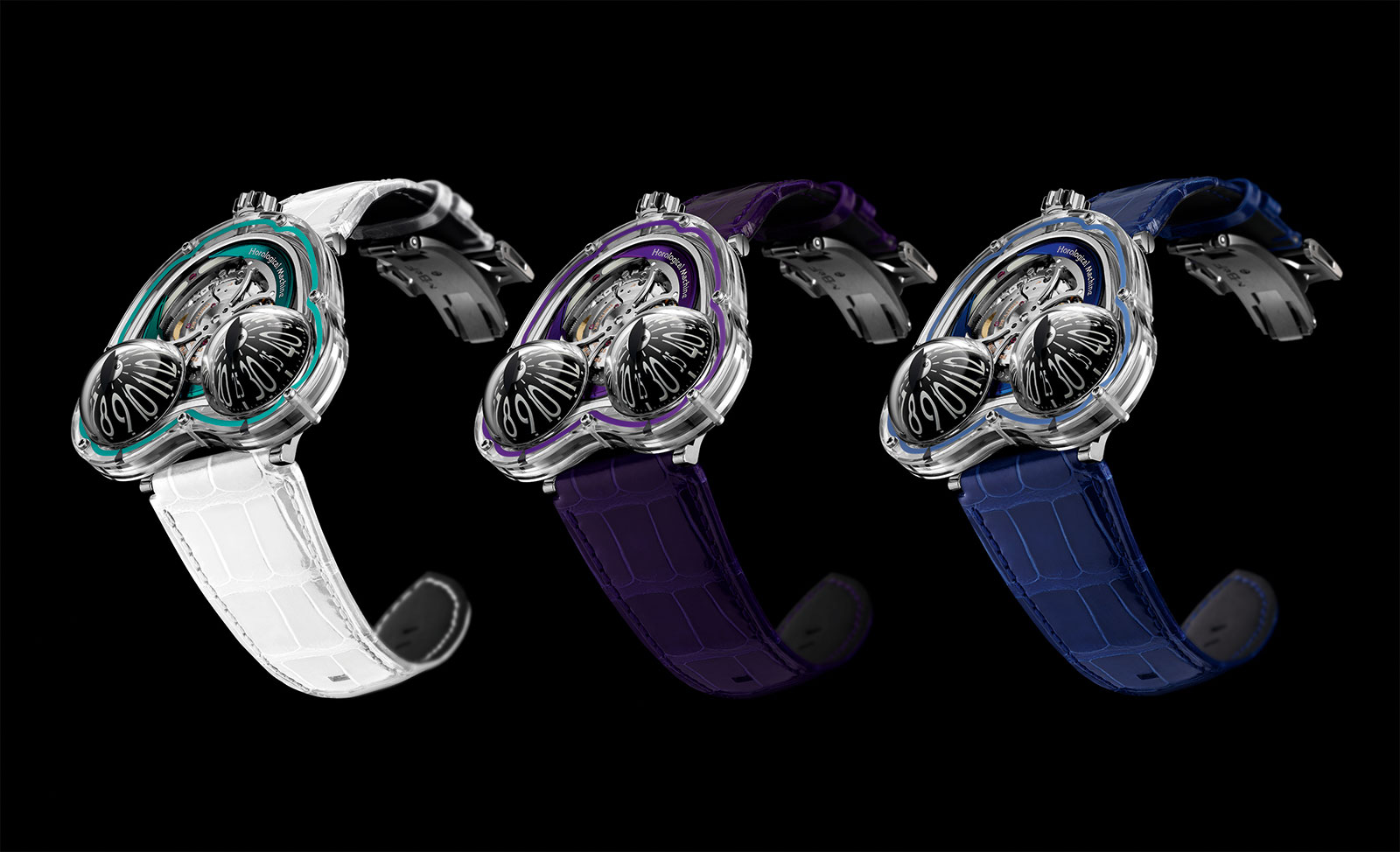 Changing the case material gives the Frog X a whole new look, which is surprising, since the design is exceptionally idiosyncratic. In fact, the sapphire Frog resembles a grand piano.

The crystal case also gives the watch a more cohesive, organic flavour, avoiding the visual breaks between different materials like crystal and metal alloy. And the sapphire Frog also seems more pared back, at least in photos, than the most sapphire-case watches that tend to be flashy.

And having the same shape and size, the Frog X shares a crucial quality with the earlier versions of the HM3: good wearability despite the avant-garde design. Because the case is neither excessive long nor wide, and has tiny lugs, it sits well on the wrist despite its seemingly large size. This ease of wear is doubtlessly one of the factors that helped make the HM3 the bestselling MB&F by a large margin. 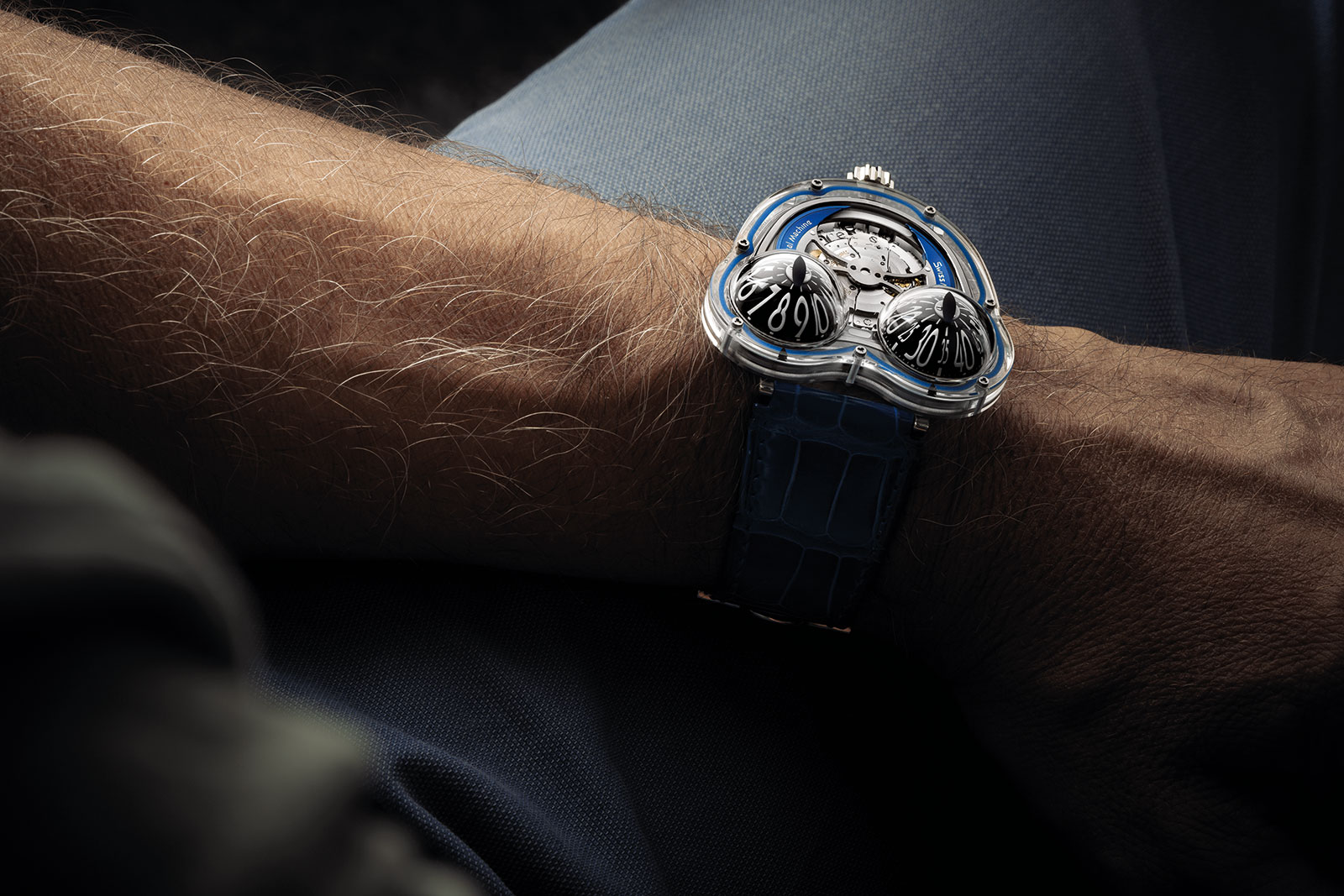 While the new look is attractive, the case material isn’t novel. The sapphire watch case was pioneered by Alain Silberstein almost 30 years ago, then made fashionable again by Richard Mille in the 21st century, and are now fairly widely used at the high end of watchmaking.

MB&F’s pace of innovation is sedate this year, with recent launches like the LM Perpetual EVO and HM10 Bulldog being largely iterations of existing elements. That said, one can reasonably argue that an anniversary edition like the Frog X isn’t supposed to be revolutionary in the first place since it commemorates something that happened before. 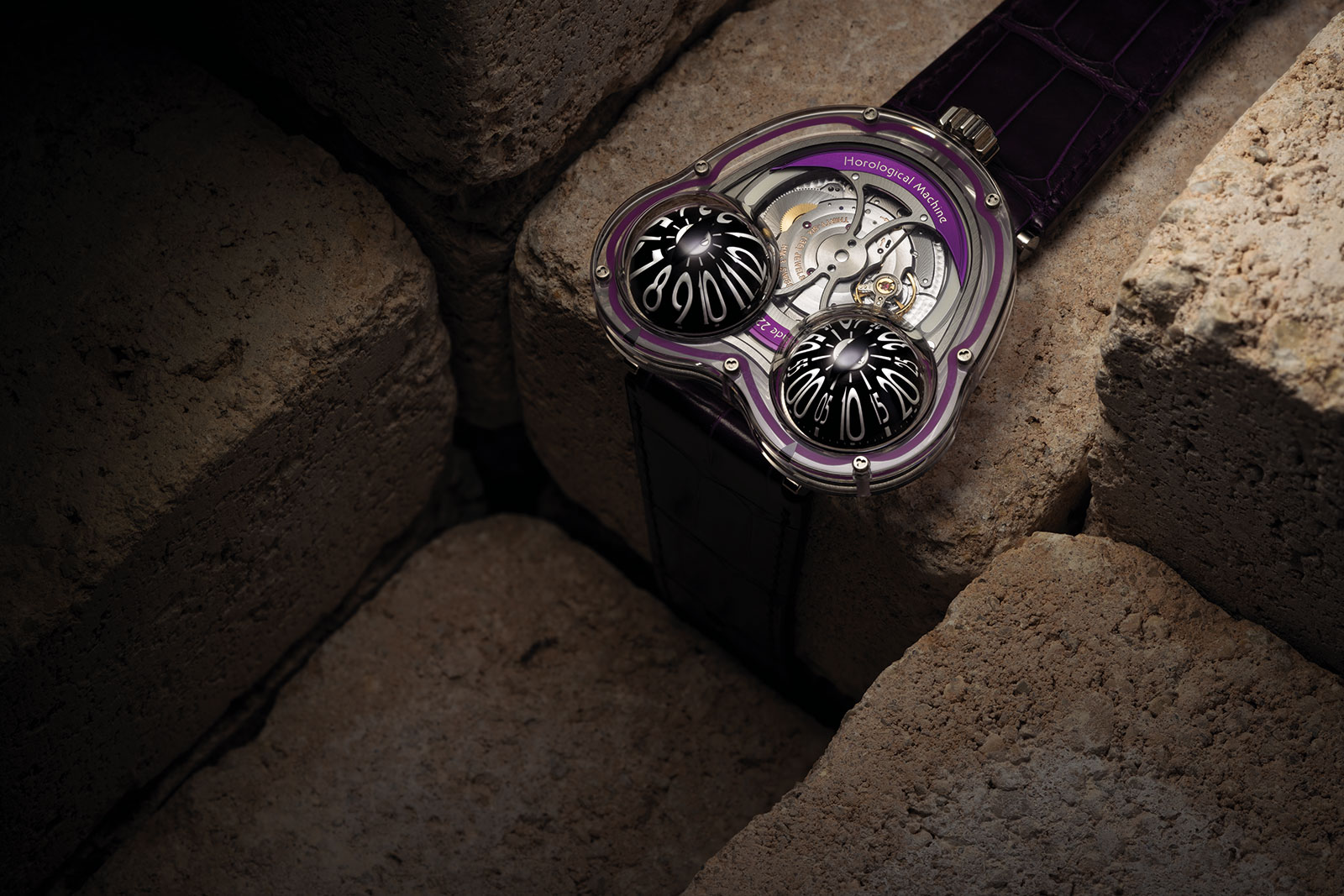 At the same time, the Frog X feels pricey. Retailing just north of US$150,000, about twice as much as earlier versions of the HM3. In fairness, that’s less than what other comparable brands charge for sapphire cases, a premium attributable to the complicated and costly fabrication of the case. That said, the price is hard to swallow given that sapphire watches are not as unique as they were. 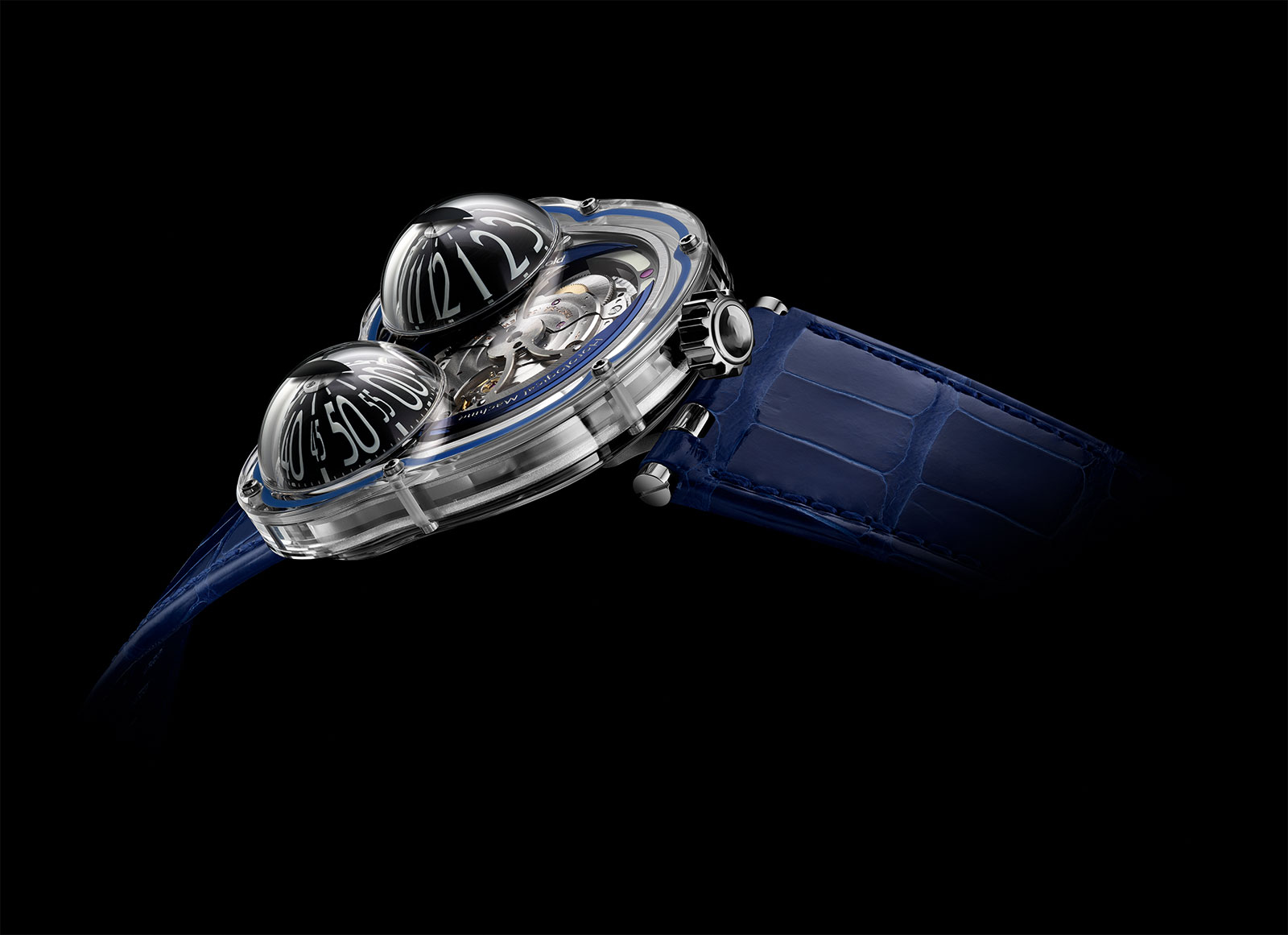 The movement in the Frog X is essentially identical to earlier versions of the model. And it is a notably interesting movement, beyond the time display. The innovative construction of the movement is often overlooked, because the sapphire domes get all the attention.

One of the central themes of the original HM3 design was to present most of the movement on the dial, which is why the movement is essentially inverted, with base calibre front and centre. Now the exposition of the movement has been maximised with the transparent case. 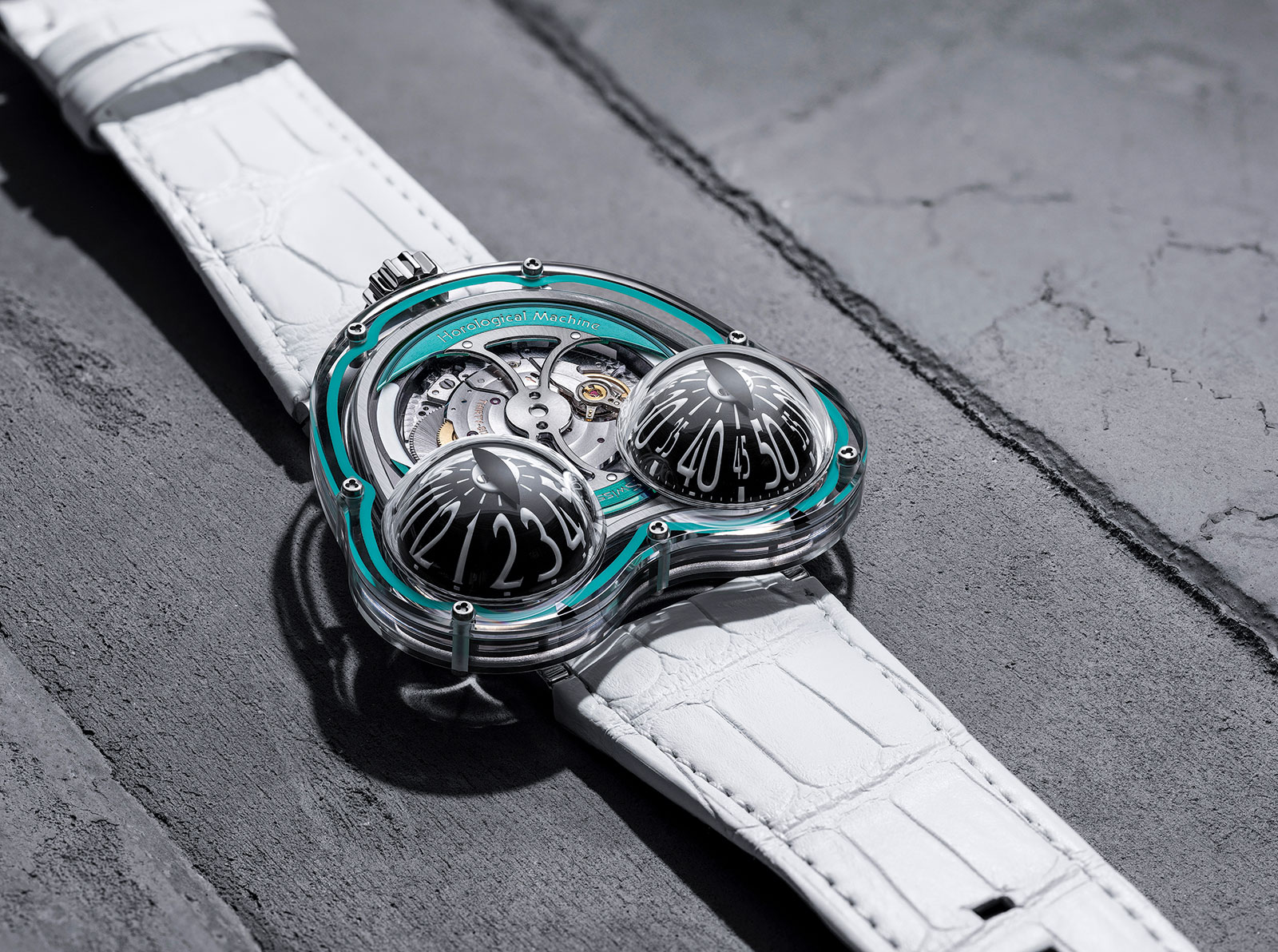 Built by the complications specialist Agenhor, which was founded by Jean-Marc Wiederrecht and is now run by his two sons, the time display module is built on the Girard-Perregaux GP03300, which is entirely conventional under the battle axe-shaped rotor.

But the view from the back is less conventional due to the inverted construction. Two large ceramic bearings drive the time display domes, translating the time-telling mechanism on the back into the frontal display. 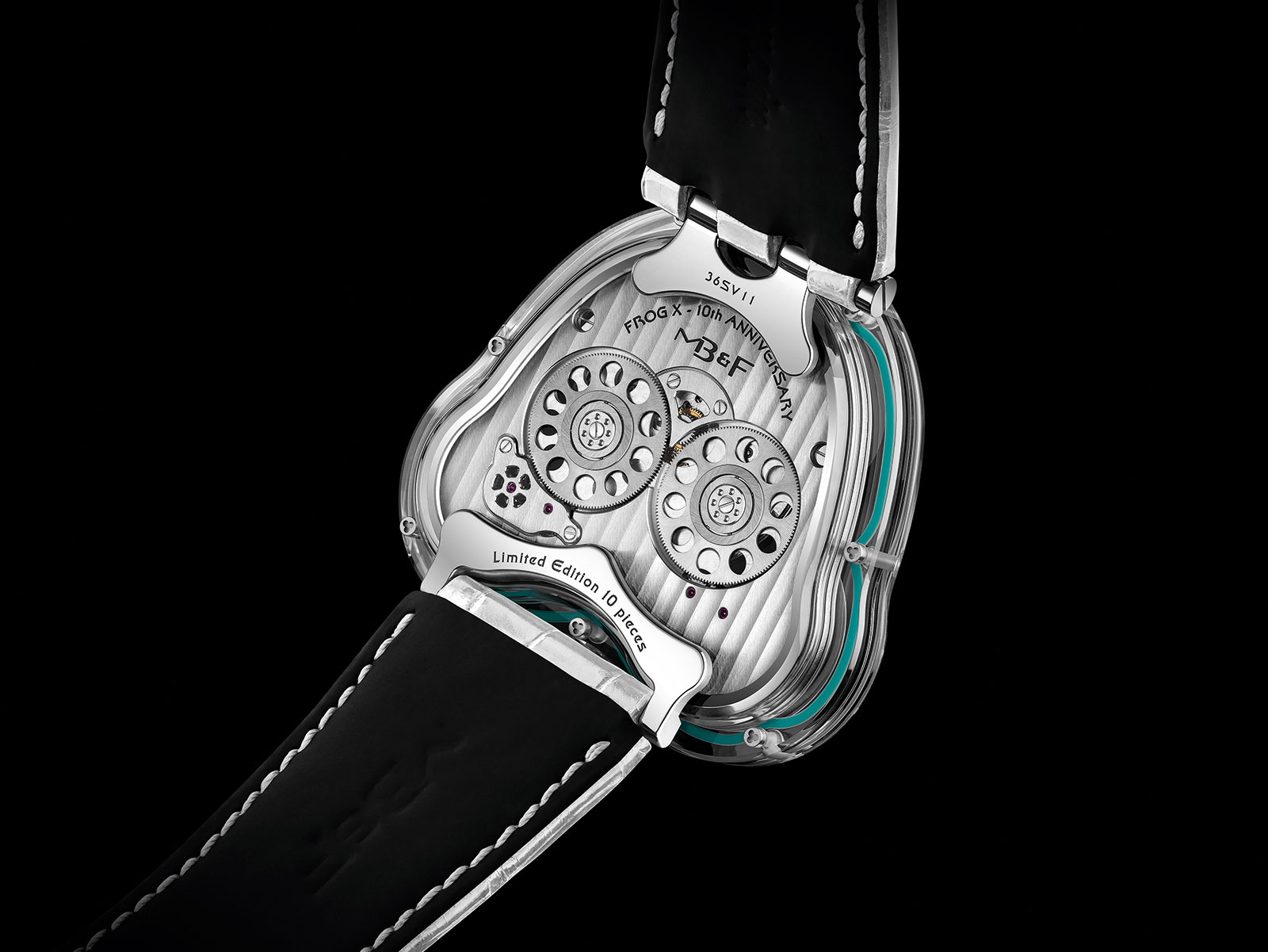 The domed time display also makes wearing the watch in either direction – crown up or down – possible. The fixed pointers for the time are elongated and span both sides of the domed crystals, so the time can be calibrated to either pointer, although the crown-up position is convention for the HM3.

And the movement is also visible in the dark – the rotor is coated with luminescent material and winds unidirectionally, allowing it to spin freely and rapidly in the other direction, creating flashes of Super-Luminova. 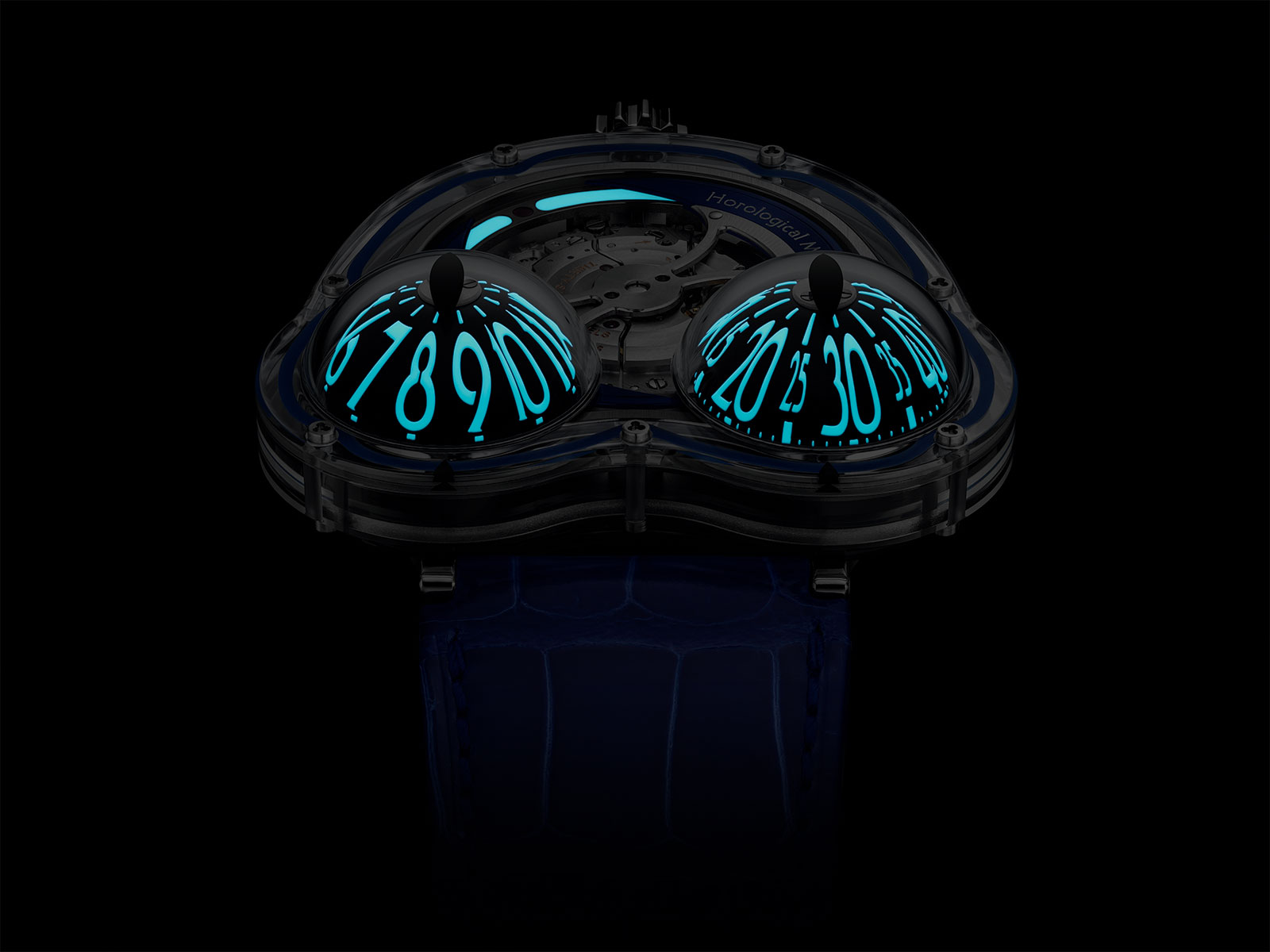 Limited edition: 10 pieces each in blue, purple, and turquoise
Availability: Now at MB&F’s online shop and authorised retailers
Price: US$152,000; or 212,000 Singapore dollars

Addition November 10, 2020: Included the fact that sapphire watch cases usually cost the same, or more, compared to metal alloy cases, in relation to the retail price of the Frog X.