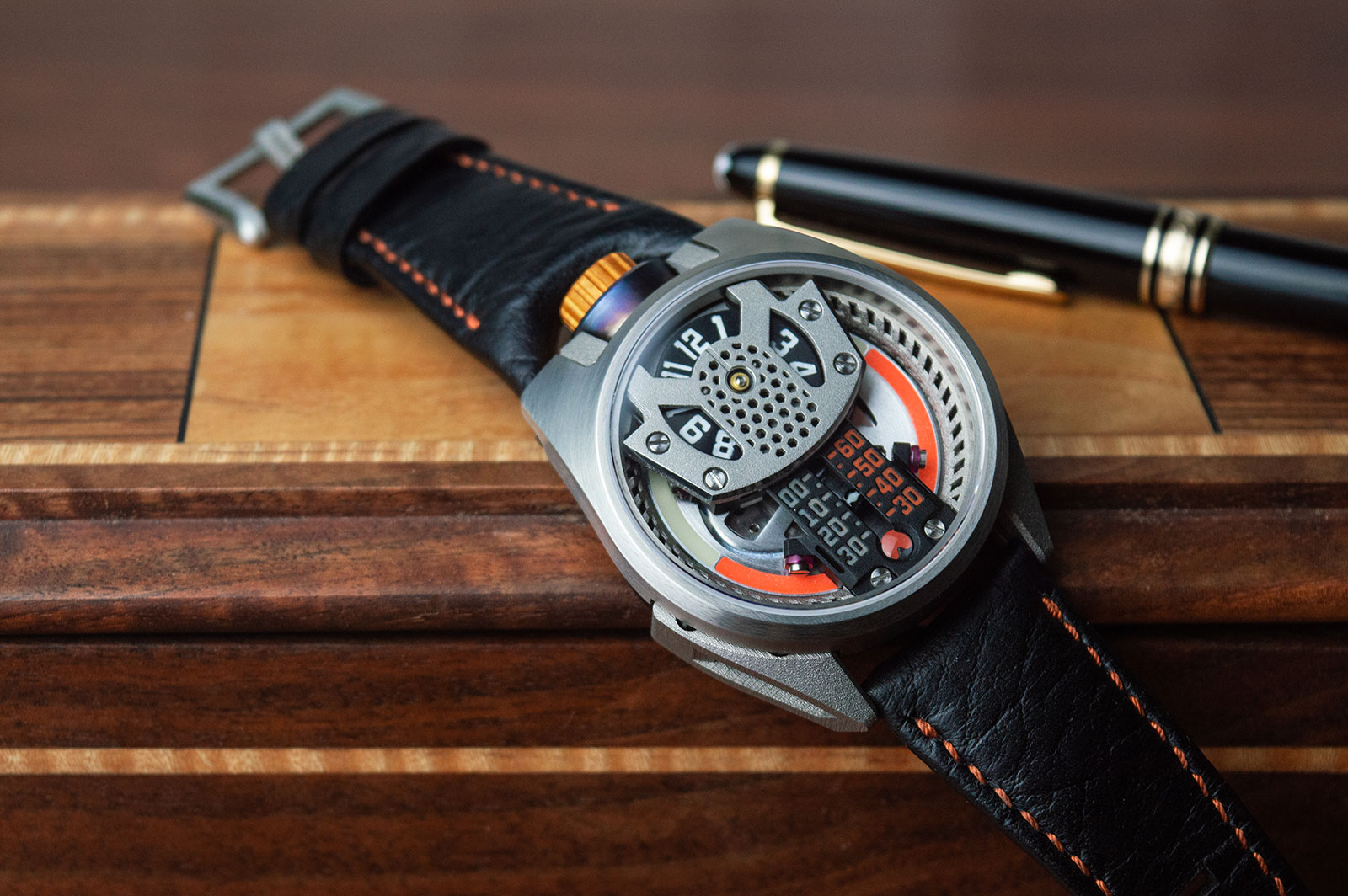 A watch brand founded by in San Francisco by a young mechanical engineer, Barrelhand’s first wristwatch is the Project 1. Inspired by Urwerk, the hand-wound Project 1 tells the time unconventionally via jumping hours and linear minutes. And it is made up of components produced with cost-effective 3D printing, resulting in a retail price of US$30,000 – reasonably accessible  as such things go.

I first encountered the work of Barrelhand founder Karel Bachand in 2014, when he created a replica of the Urwerk UR-202 in 3D-printed plastic. He’s spent the intervening years developing his own wristwatch, and the result is impressive, especially in its conception and smart engineering.

The time display is inventive, particularly the linear minutes that’s driven by a large rotating disc resembling a vinyl record. Though the jumping hours is more ordinary, it is driven by an extra-large Maltese cross gear instead of a conventional lever-and-star-wheel set up, making it adjustable forwards and backwards (though it will not jump as instantaneously due to how the Maltese cross gear works). And the techniques used to produce many of the parts are unusual, probably reflecting Mr Bachand mechanical engineering background. The large steel lugs, for example, are produced via binder jet 3D printing.

The Project 1 doesn’t have the refinement of visually-similar Swiss watches – many of its surfaces are only modestly finished – but it costs substantially less, so it is fairly priced.

That said, the price difference between this and the base-model Urwerk UR-100 is US$18,000, a large sum of money but not insurmountable. As a result, Barrelhand probably needs to up the finishing of its watches, or boost the mechanical complexity, to compete in the long term.

A mechanical engineer by training, Mr Bachand first encountered the Urwerk UR-202 while a student at university. That started his quest to replicate the UR-202 with a 3D printer, a feat that managed in two years. Urwerk’s founders caught wind of the project, and Mr Bachand got a meeting with the duo at trade fair SIHH in Geneva. The encounter inspired Mr Bachand to go one further and create his own mechanical wristwatch, resulting in Project 1, which took six years to realise. 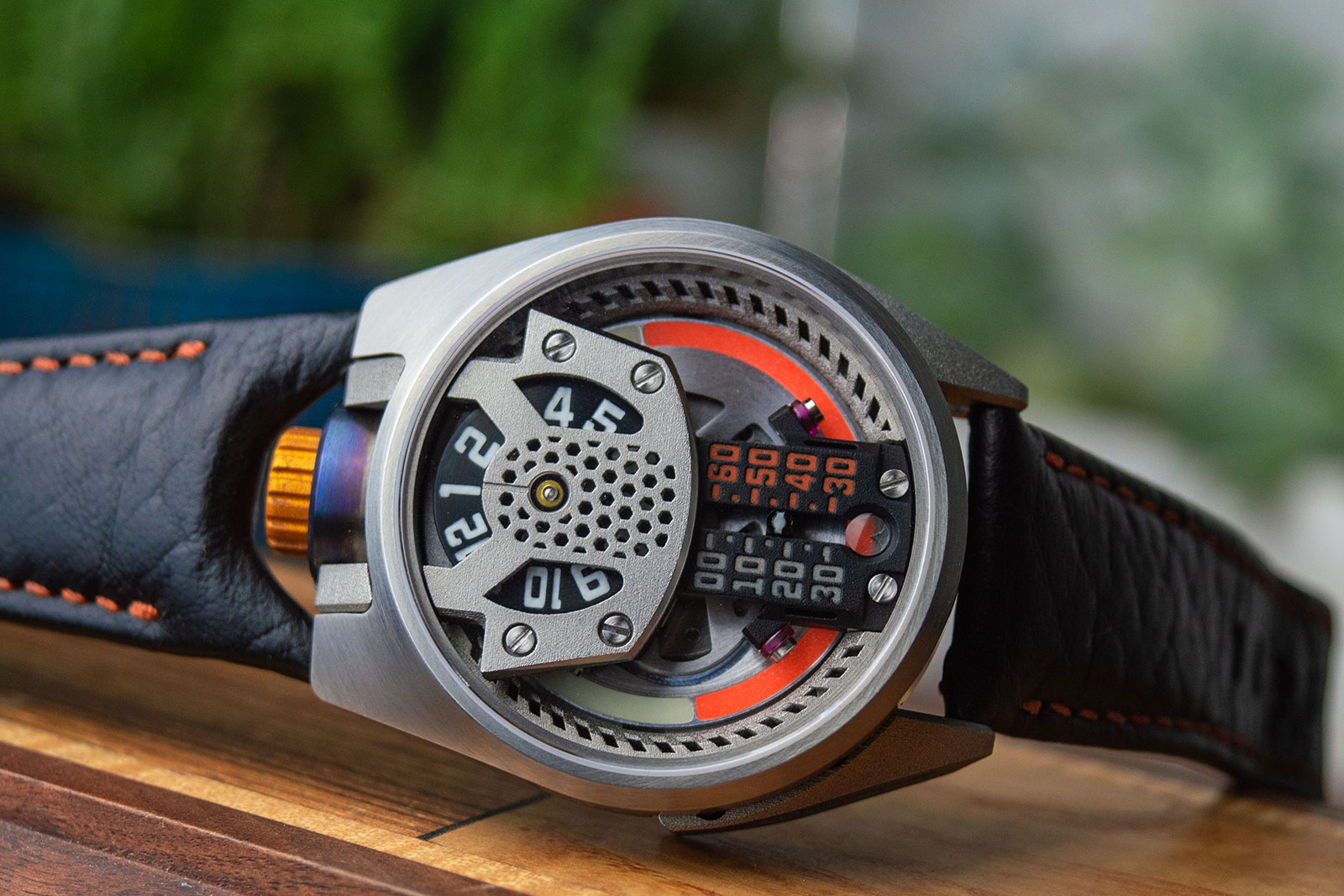 Priced lower than similar watches made in Switzerland, the Project 1 is the result of modern manufacturing that help lower its cost of production. Many of its crucial parts inside and out are fabricated via additive methods – 3D printing and variations of it – reducing the cost of both prototyping and serial production. The bridge for the hour disc on the dial, for instance, is made with metal binder jetting, which is 3D printing steel.

Most of the watch is made in the United States, with the notable exceptions being the Swiss base movement made by Eterna and the binder jet-produced components that are done in Germany. 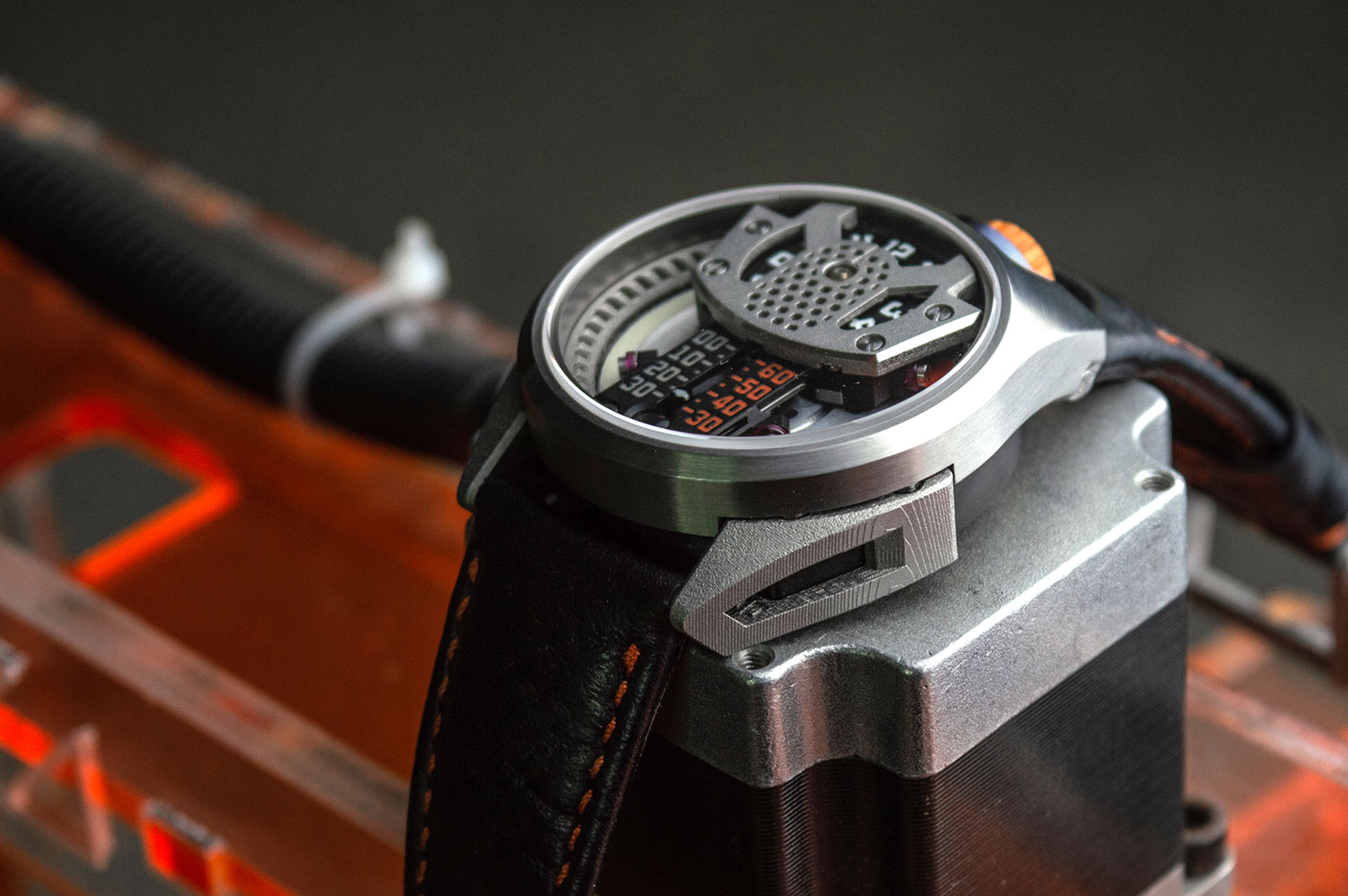 Unlike conventional jumping hours that rely on levers and star-shaped wheels, the jumping hour in the Project 1 is driven by a Geneva drive, alternatively known as a Maltese cross. Notably, this is the same gear type used by Urwerk in its satellite-disc hour display found in watches like the UR-103 and UR-100. 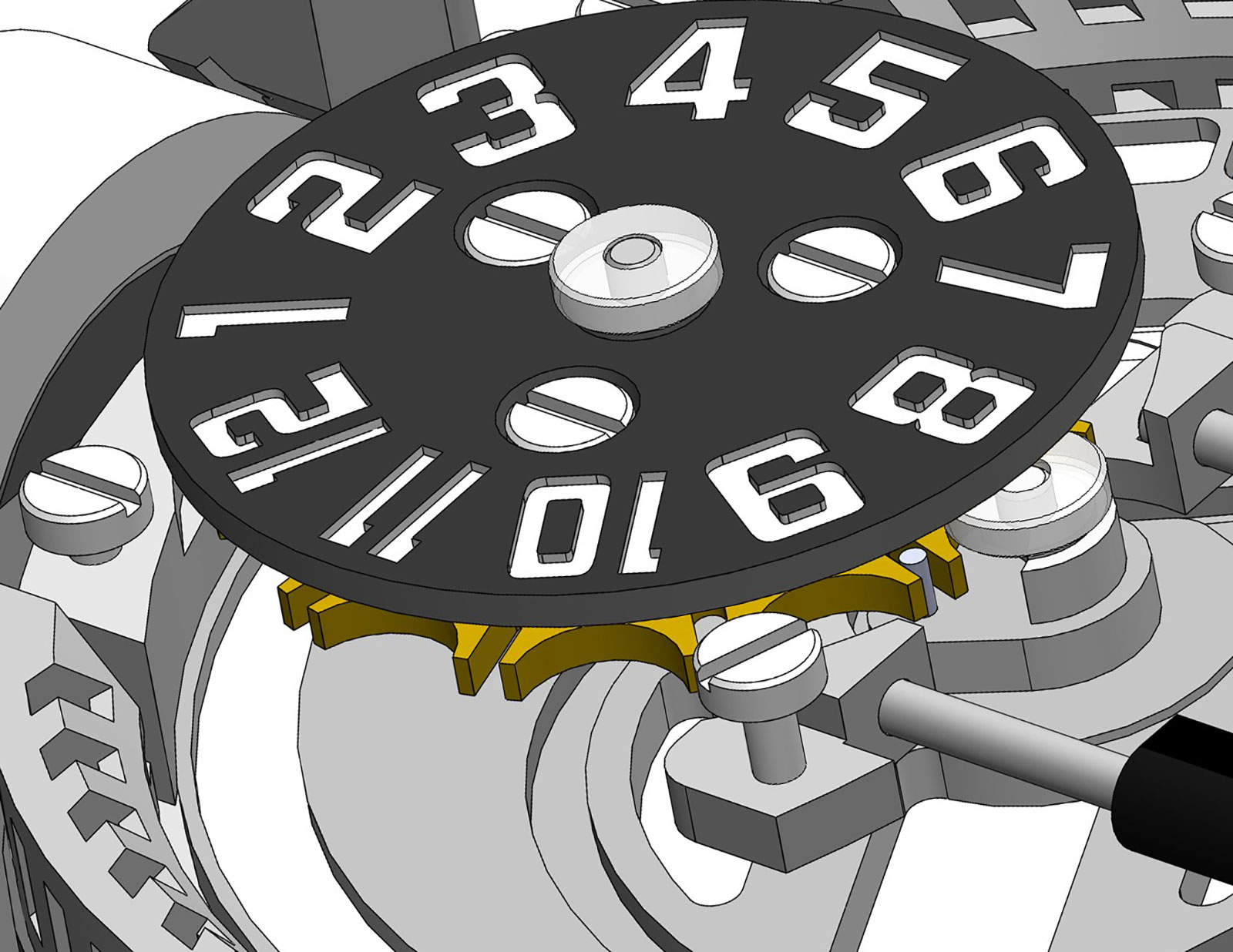 Frequently used for displays that move in an intermittent manner – once every 60 minutes in the case of the hour display – the Maltese cross has the advantage of simplicity and robustness as it can be set backwards and forwards without damaging the mechanism.

The linear minute display is uncommon, with a mechanism inspired by a record player. Positioned just under the minute scale is a large disc, one almost as wide as the dial, that makes one revolution every hour.

The disc is actually a cam, with a kidney-shaped track milled onto its surface. As the disc turns, a lever traces the path of the cam, causing the minute pointer to rise and fall, indicating the current minute on the vertical scale. The dial without the minute scale and bridges 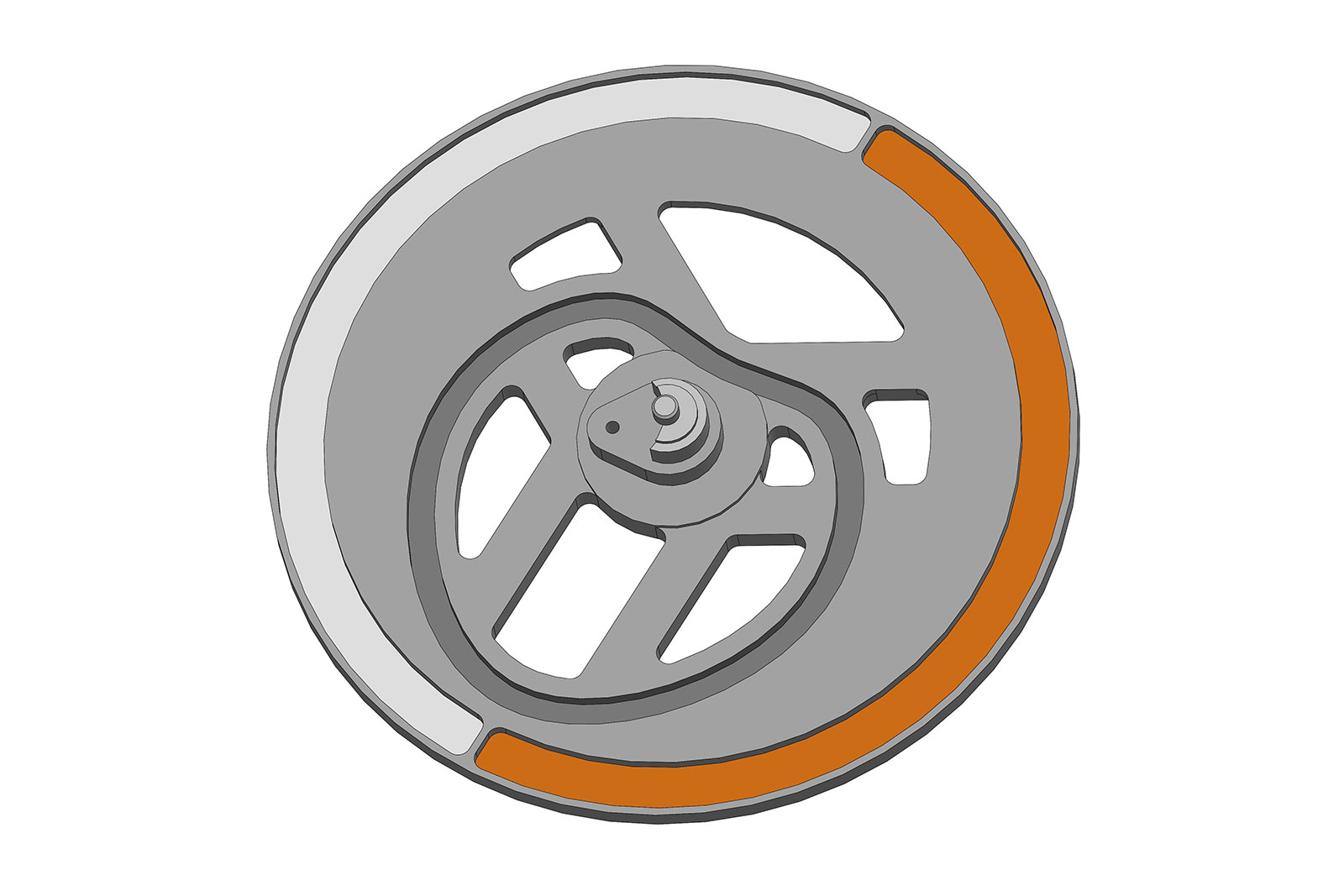 The disc that drives the minute lever

With the minute disc being so large, it was necessary to install four ruby rollers on its perimeter, helping to smooth its rotation as well as act as shock absorbers. 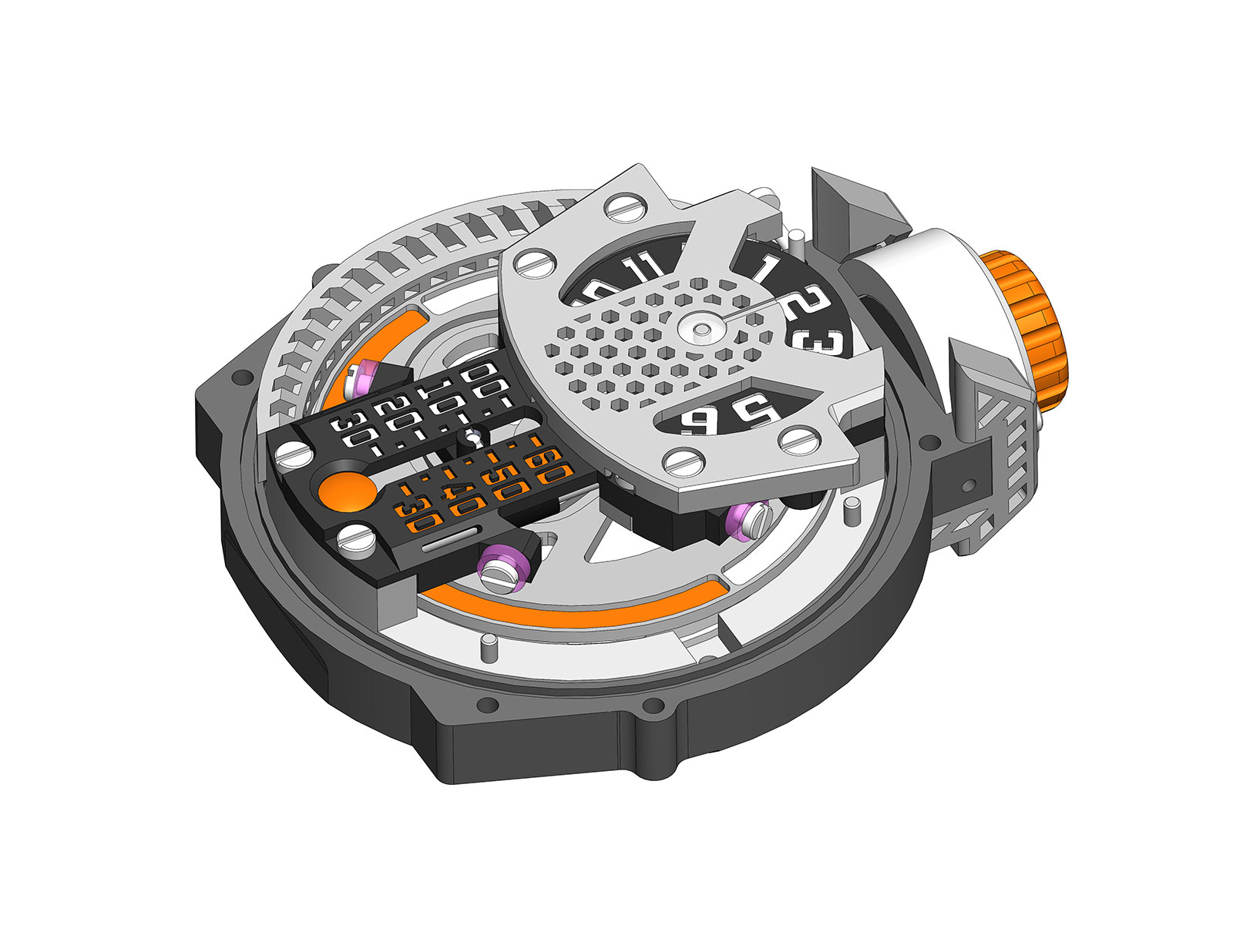 Though the displays are original, legibility still seems good. And that holds true at night as well: both the hour and minute displays are painted in Super-Luminova of different colours, creating a striking glow in the dark. 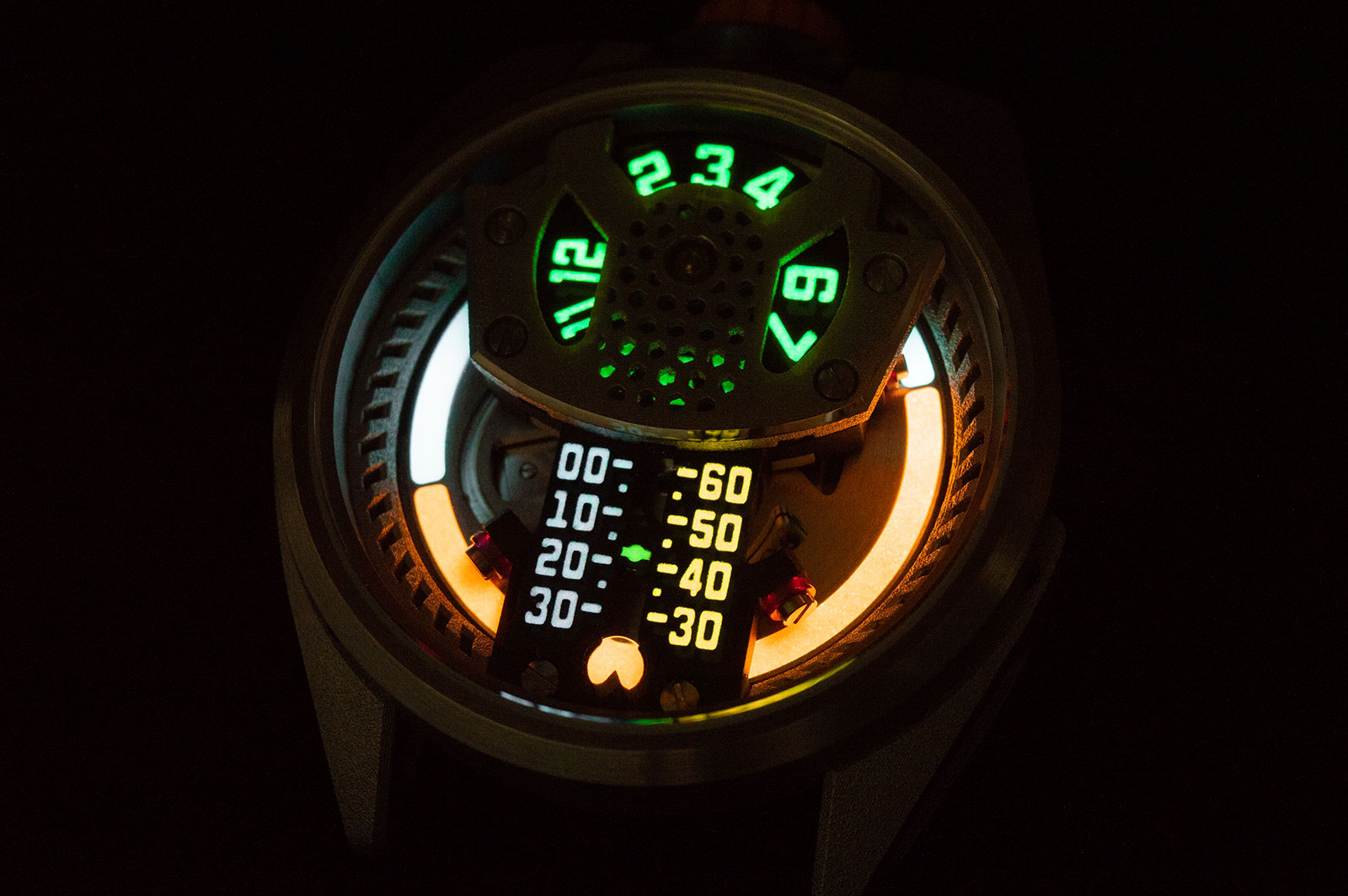 Powered the proprietary display mechanism is the Eterna cal. 3901M, part of the brand’s Calibre 39 family of movements. Conceived to be a modular, robust workhorse that’s an alternative to the Valjoux 7750, the Calibre 39 is generally well regarded within the watch industry, and also by Barrelhand’s founder.

“The Eterna 39 has great torque and we were really impressed with the timekeeping out of the box,” explains Mr Bachand, “The movement construction is fantastic too – really robust and easily serviceable – making it was the perfect base.”

That said, the Calibre 39 has never gained much traction in the broader industry, which is perhaps due in part to Eterna, which has been drifting for several years. 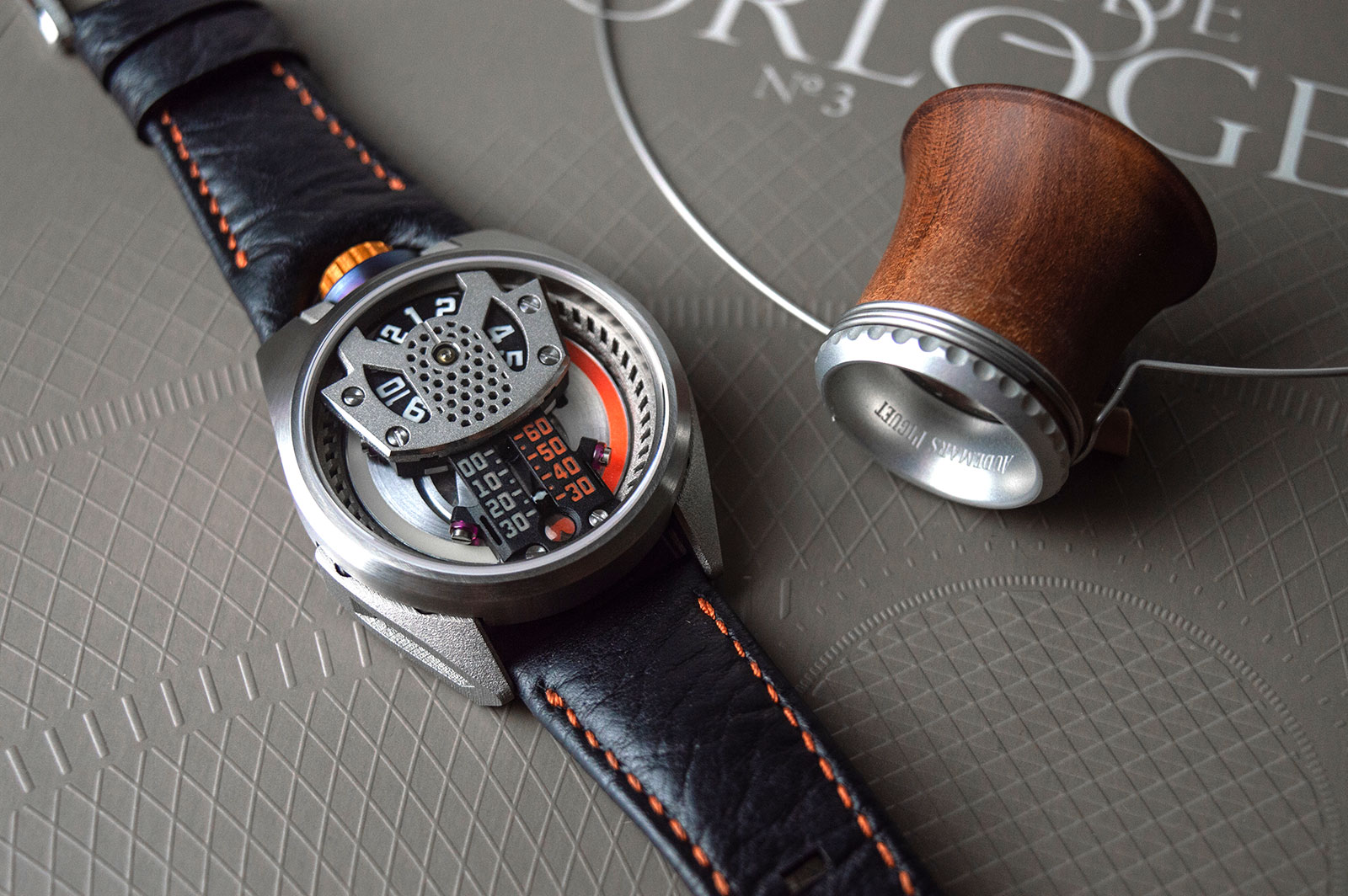 One factor behind the relatively affordable price of the Project 1 is the cost-effective additive methods used to make the case. Eleven of the Project 1’s components – including the lugs and bridge for the hour disc on the dial – are made via binder jet 3D printing, a process where a nozzle selectively deposits a binder into powdered material – steel in this case – to solidify the powder. This is done a layer at a time – explaining the surface graining on the steel components – building up the layers one by one until the entire component is formed.

Similarly, the Project 1 was prototyped with additive production methods, like stereolithography, multi-jet modelling (or 3D printing plastic), and metal binder jetting. According to Barrelhand, components prototyped with such 3D printing methods cost a tenth those fabricated by traditional techniques like milling and wire erosion. 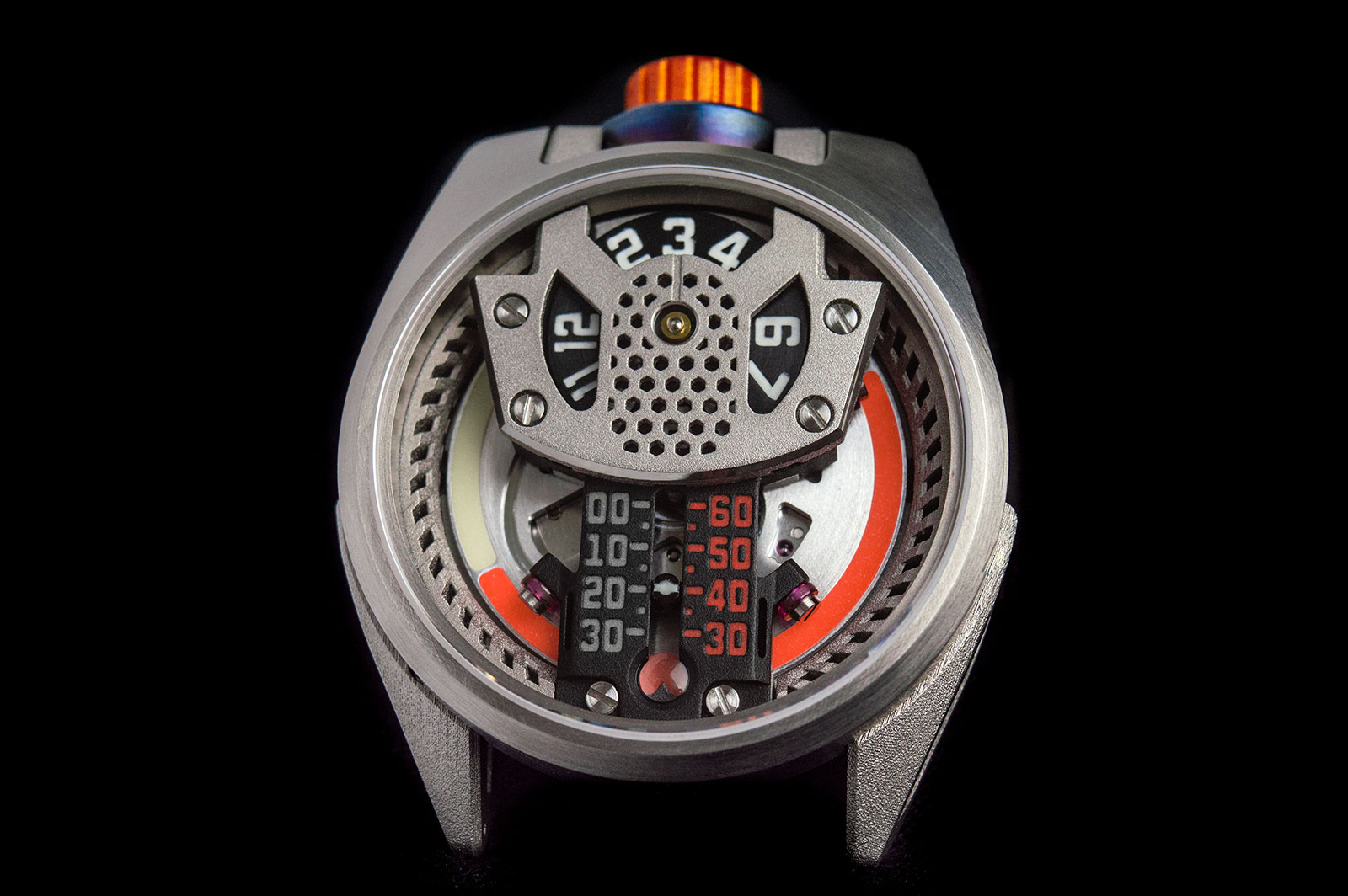 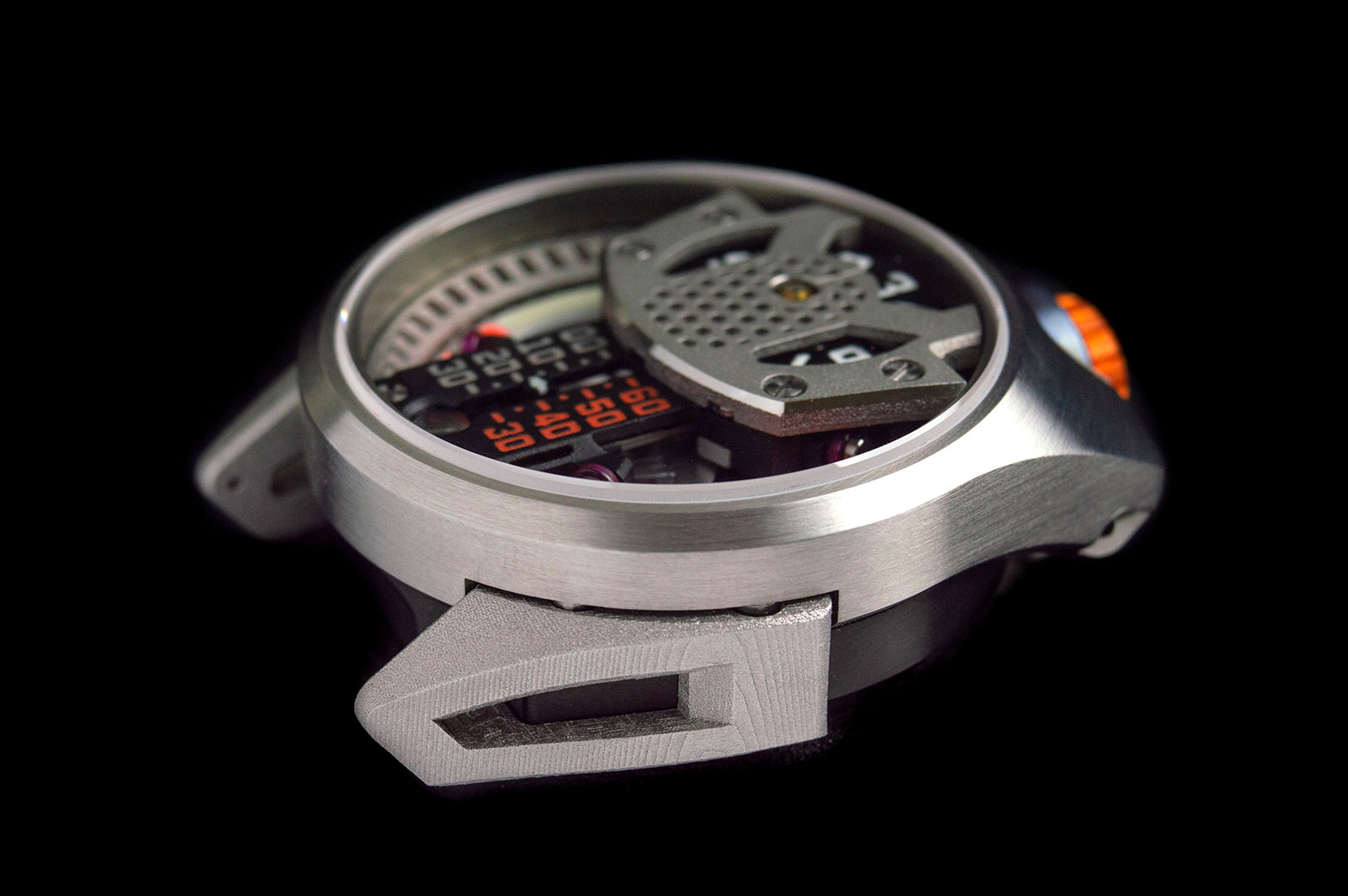