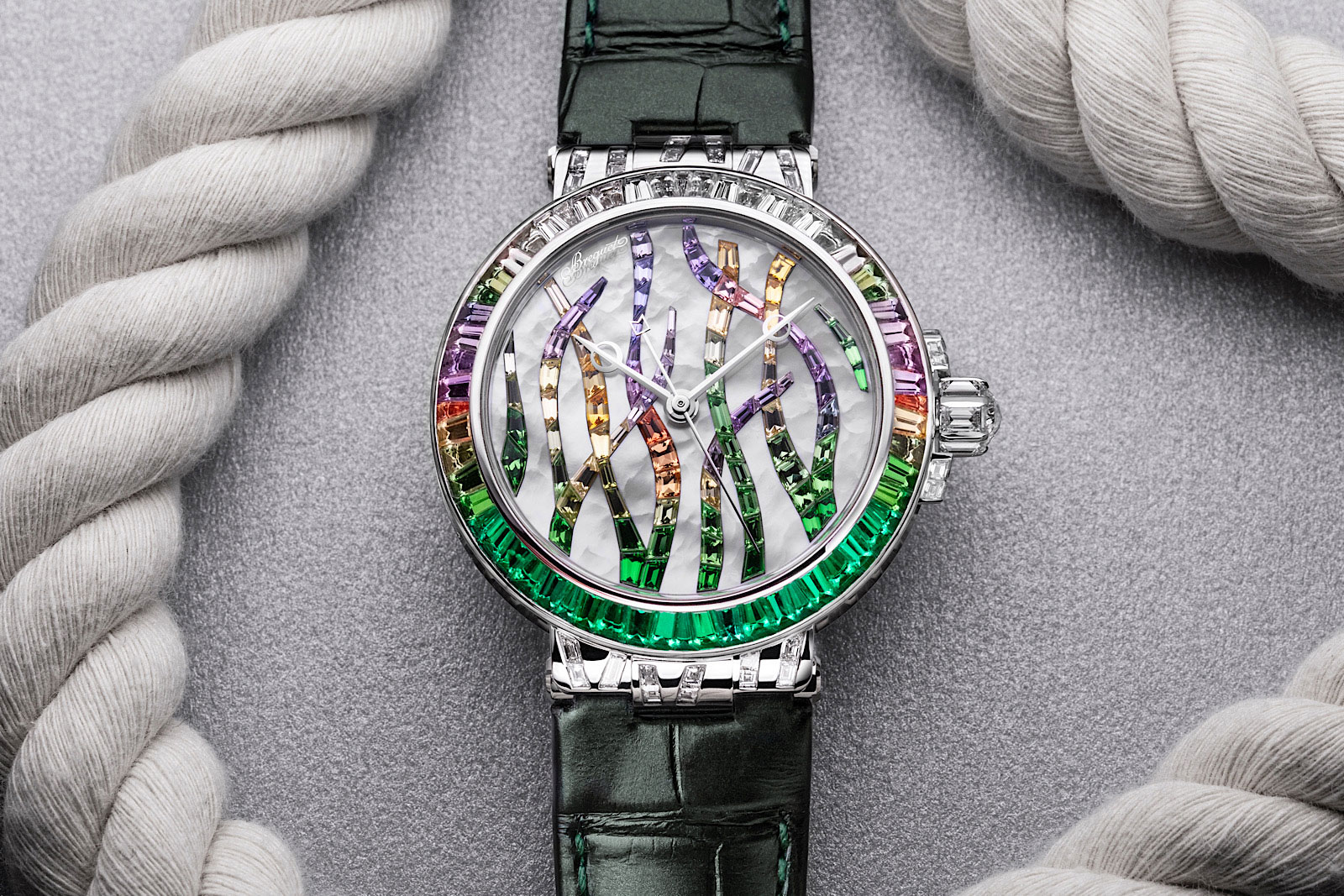 One of the grandest and oldest watchmakers in the world, Breguet was founded in 1775 and usually sticks to watches very much rooted in tradition. Even its high jewellery timepieces are elaborate and lavish, but still old school. The new Marine Haute Joaillerie 9509 Poseidonia, however, is a strikingly lively, ocean-inspired jewellery watch.

Named after the Posidonia oceanica, a seagrass found the Mediterranean sometimes known as Neptune grass, the new Marine has an iridescent mother-of-pearl dial invisibly set with 85 gemstones to form an elegant floating-seagrass motif surrounded by baguette-cut gemstones. It’s very different from the usual Breguet fare – in a good way – especially in the coloured gemstone versions.

The Poseidonia is available four variations, each distinguished by the combination of gemstones. While the diamond version is set only with diamonds, the emerald, ruby, and sapphire models are each set with a variety of gems – amethysts and tsavorites on the sapphire version for instance – to create a rainbow-hued decor. 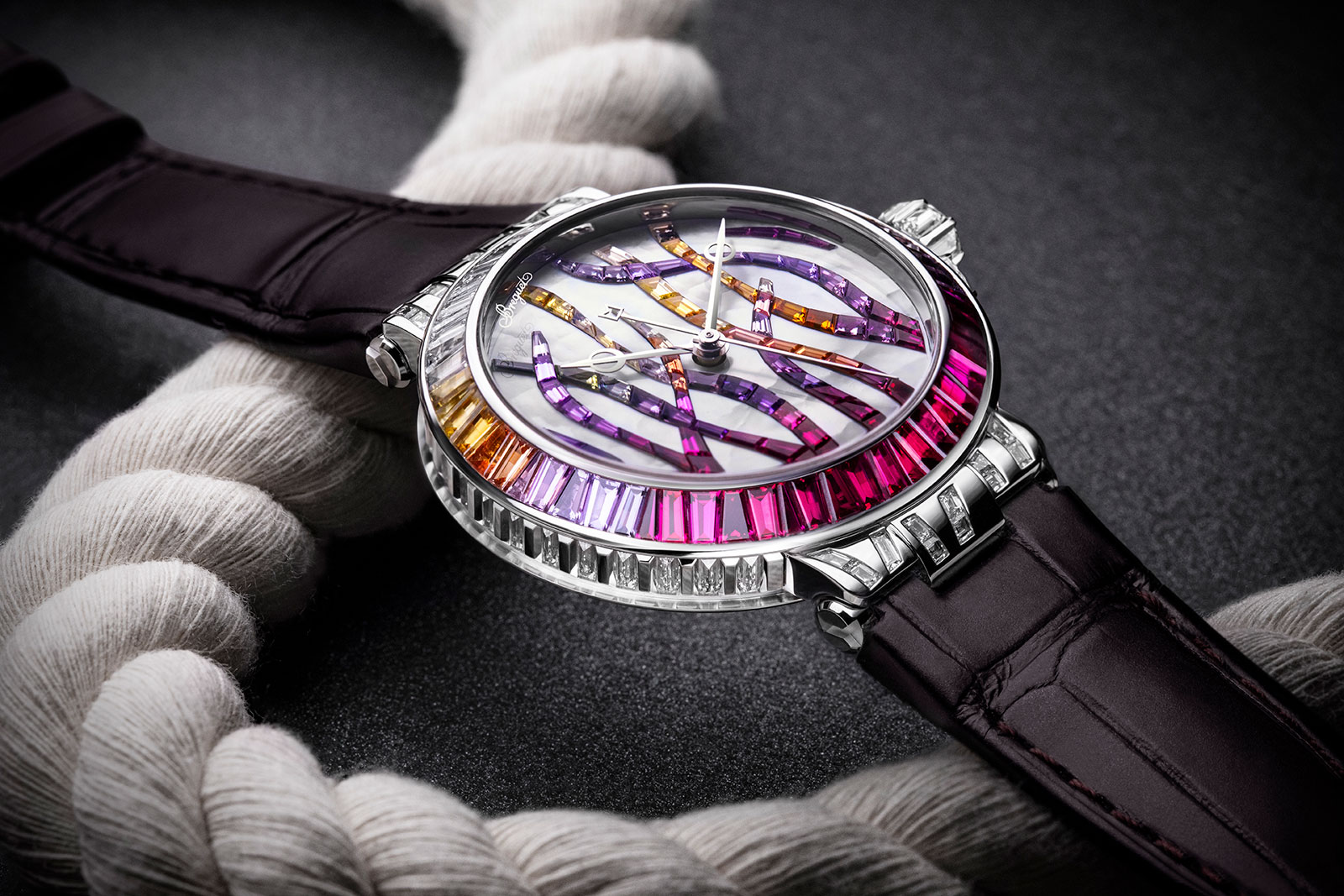 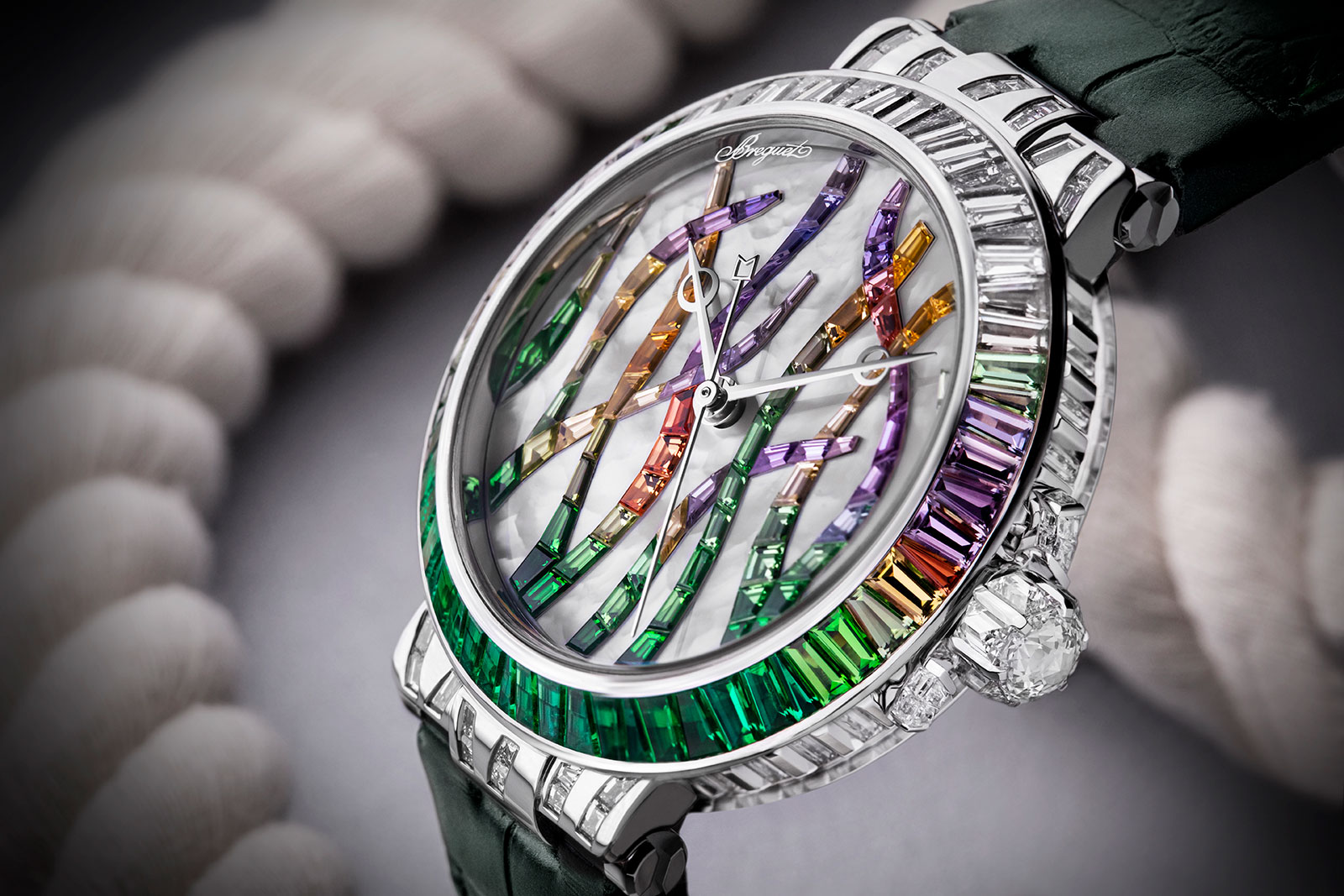 Breguet has a penchant for making high-jewellery timepieces inspired by nature. Thematically, the Poseidonia is no different, but it is far, far more spectacular in visual effect. Going by the photos, the watch will no doubt be dazzling and unapologetically luxe – and a world away from the restrained elegance of the Marine for men.

Watches that have been liberally set with gems tend to be ostentatious. The Poseidonia, however, manages to exude a subtle and refined elegance of its own, primarily with the monochromatic diamond-set version. 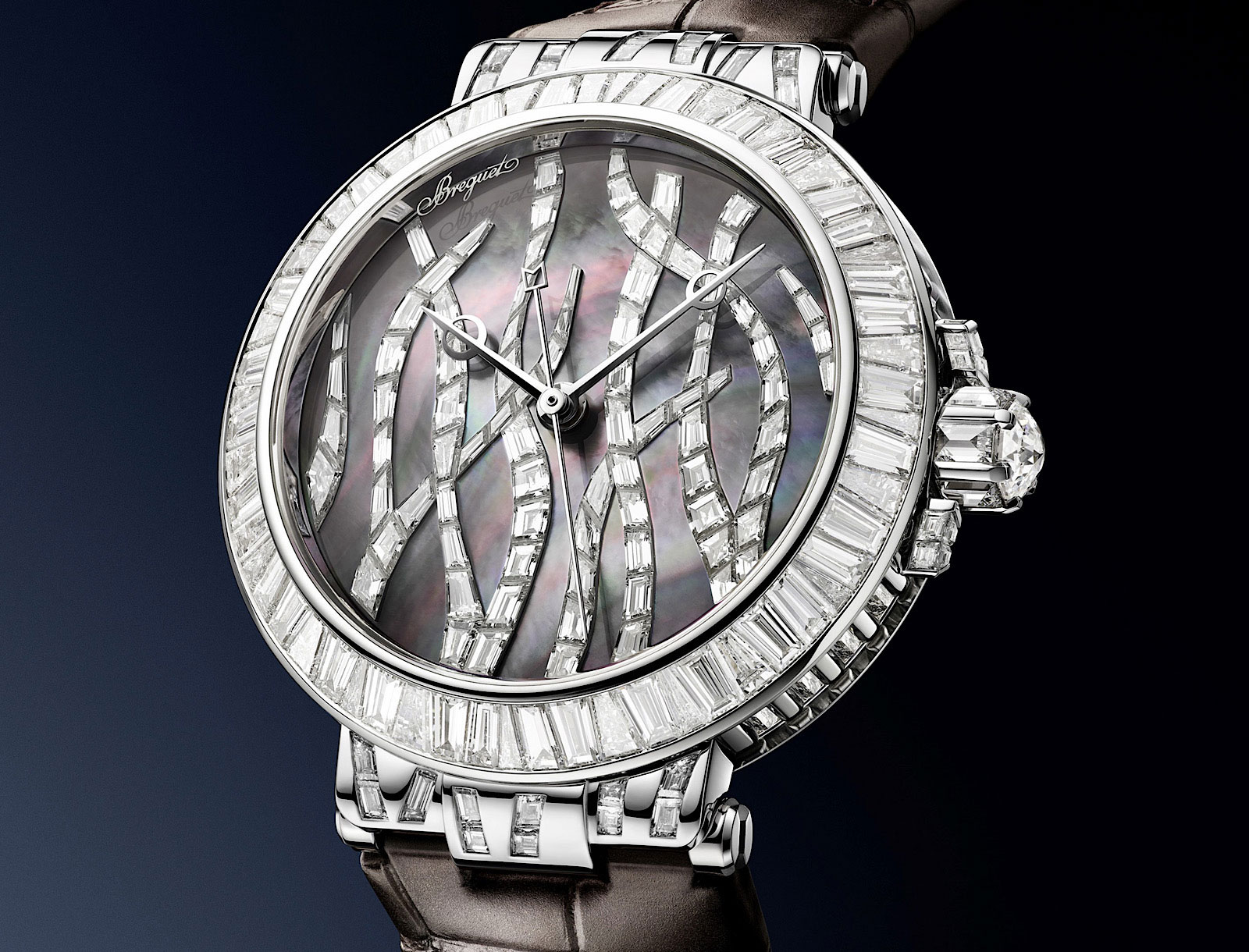 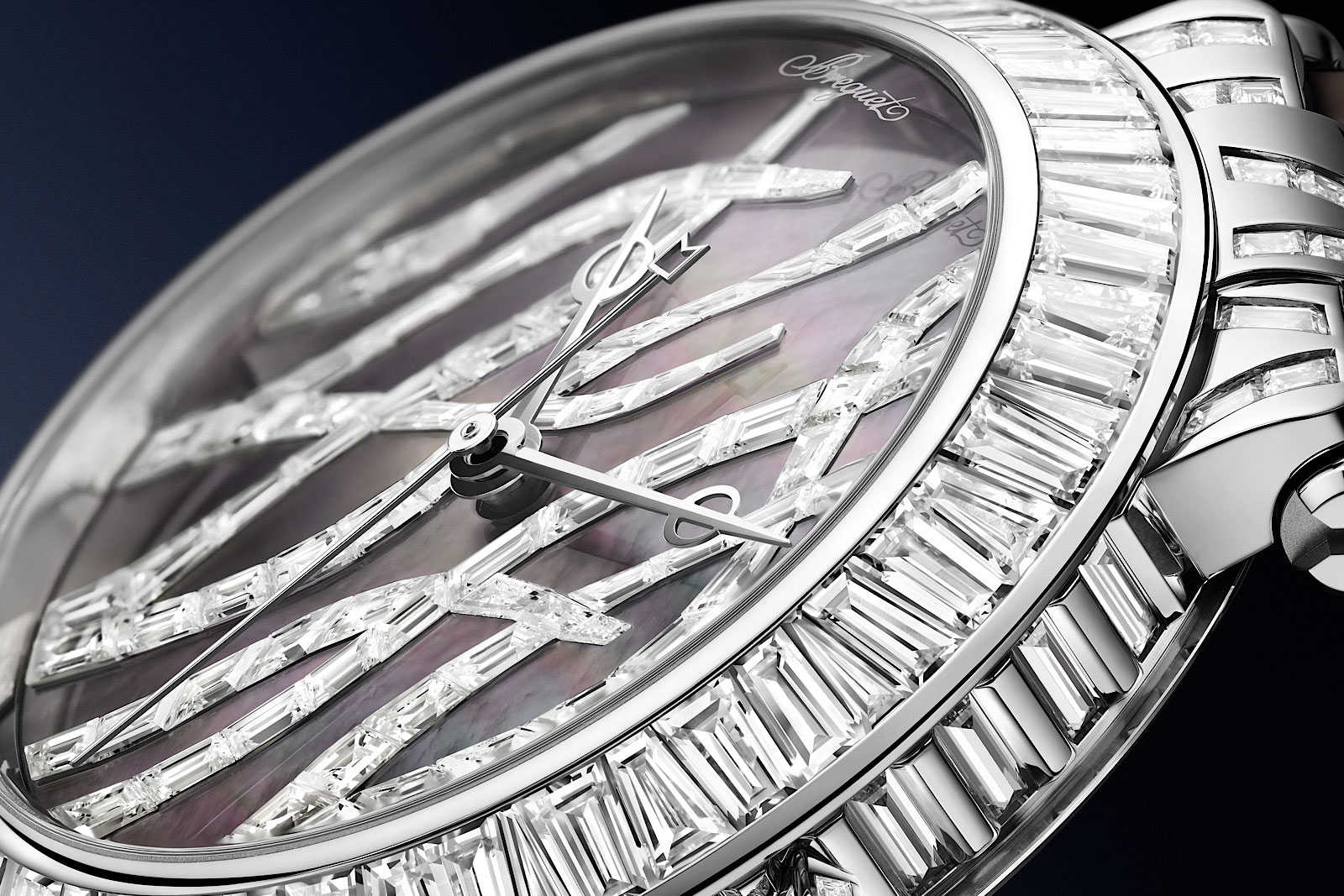 This elegance mostly stems from the dial, which is set with gems that form seamless and sinuous curves against shimmering mother-of-pearl, the ideal material for an ocean-inspired dial. Changing its hues depending on the light, mother-of-pearl evokes the evolving light and colours as ocean depths progress. Combined with the sparkling gemstones, the result is a hypnotising and alluring aesthetic that captures maritime spirit of the Marine.

Importantly, the seagrass motif on the dial, combined with the arrangement of the coloured stones – dark the bottom of the bezel and clear at the top – means the Poseidonia avoids looking like a me-too “rainbow” watch, which are now all too common given the successful of the Rolex Daytona “Rainbow”. 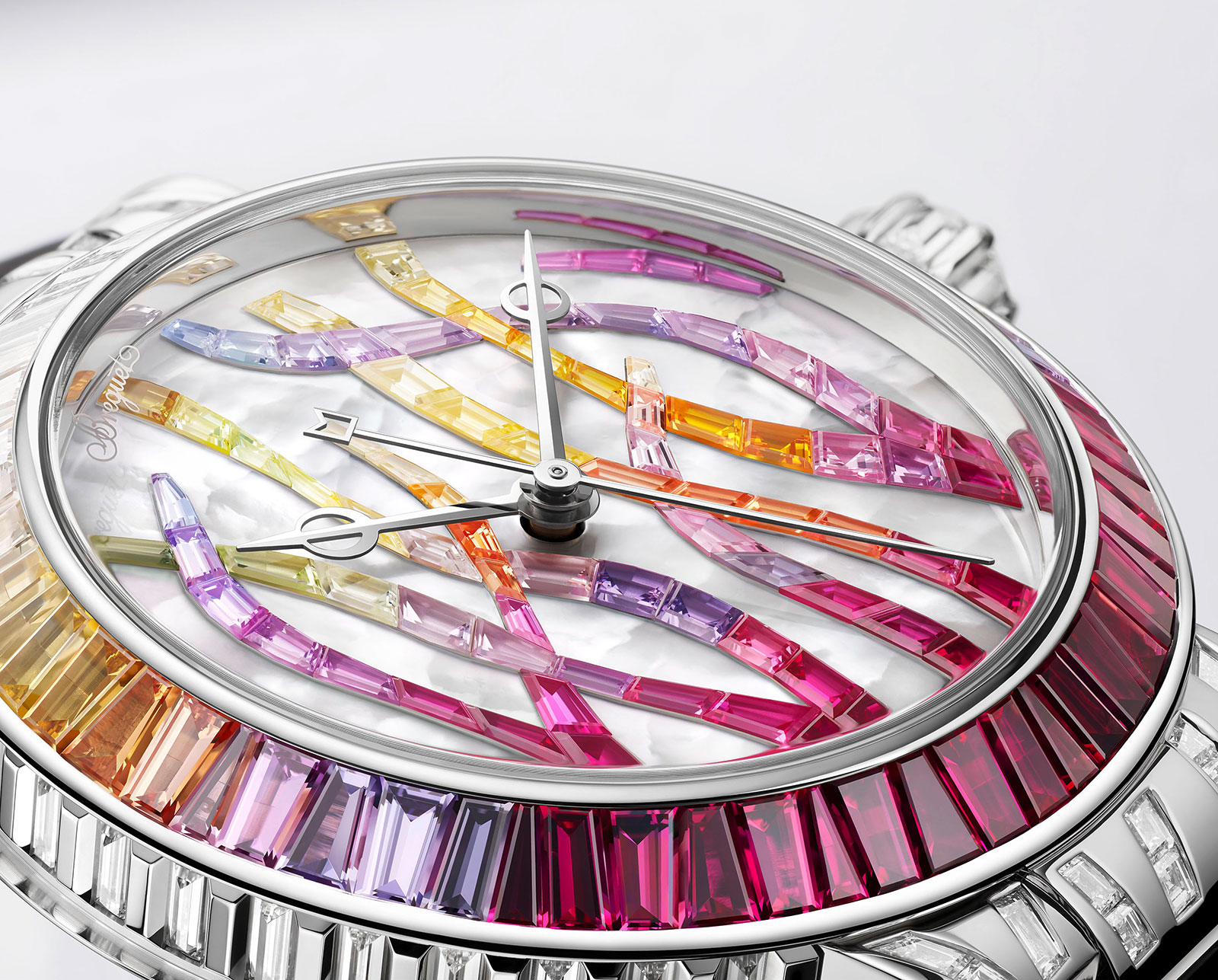 Aesthetics aside, the quality of the gem-setting is exemplary, as Breguet’s high-jewellery watches always are. All four versions of watch are set with a total of 270 stones, or a little over 10 carats, all baguette cut except for the briolette-cut diamond in the crown.

Crucially, the baguette-cut gemstones are not symmetrical, giving both the dial and bezel a livelier look, avoiding the rigid formality of many high-jewellery watches. This is most apparently on the versions set with coloured stones. And the setting is also comprehensive, with the motif extending to the lugs, creating a sense of visual continuity. Even the wave-shaped crown guards are formed of two baguette-cut diamonds. 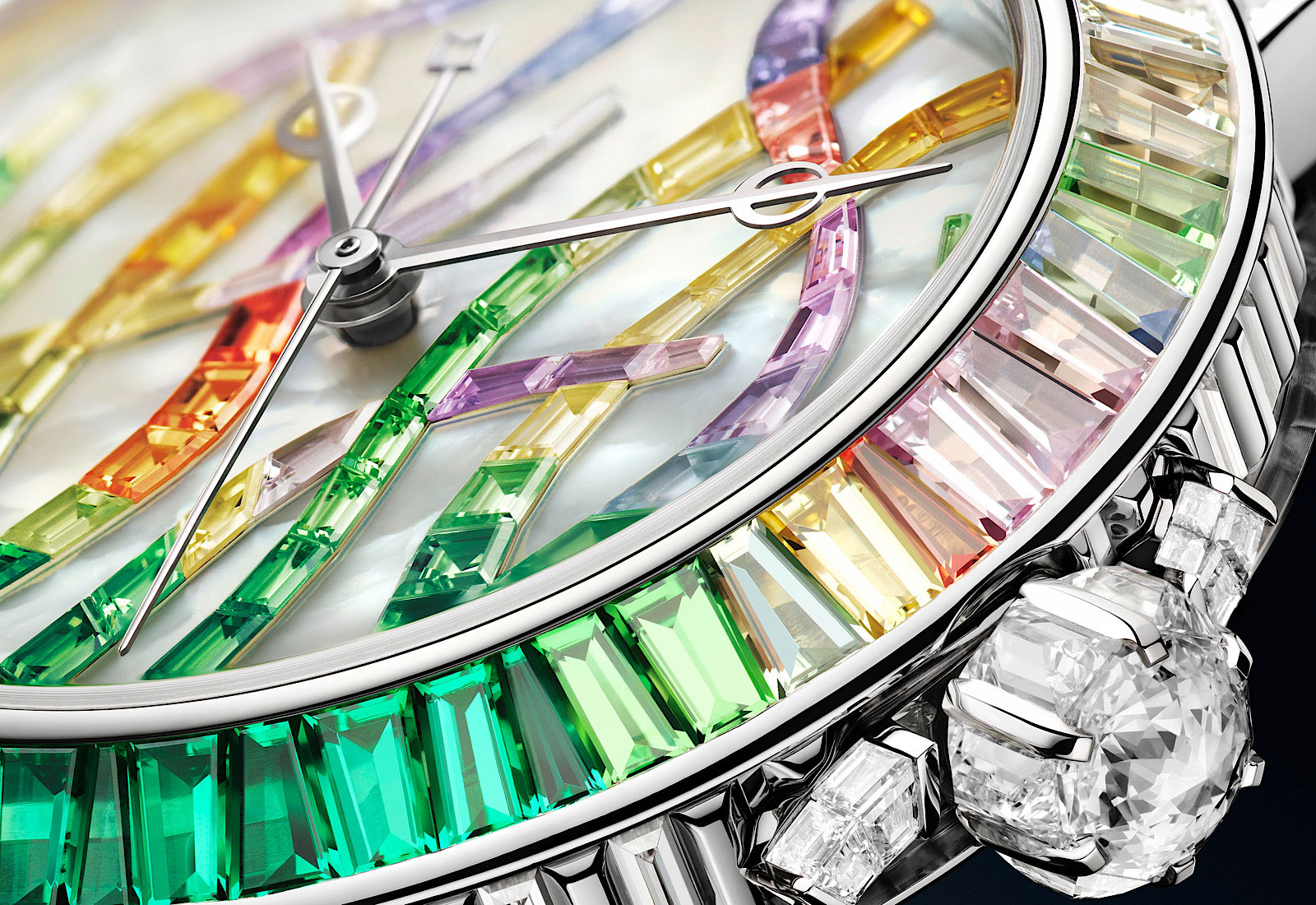 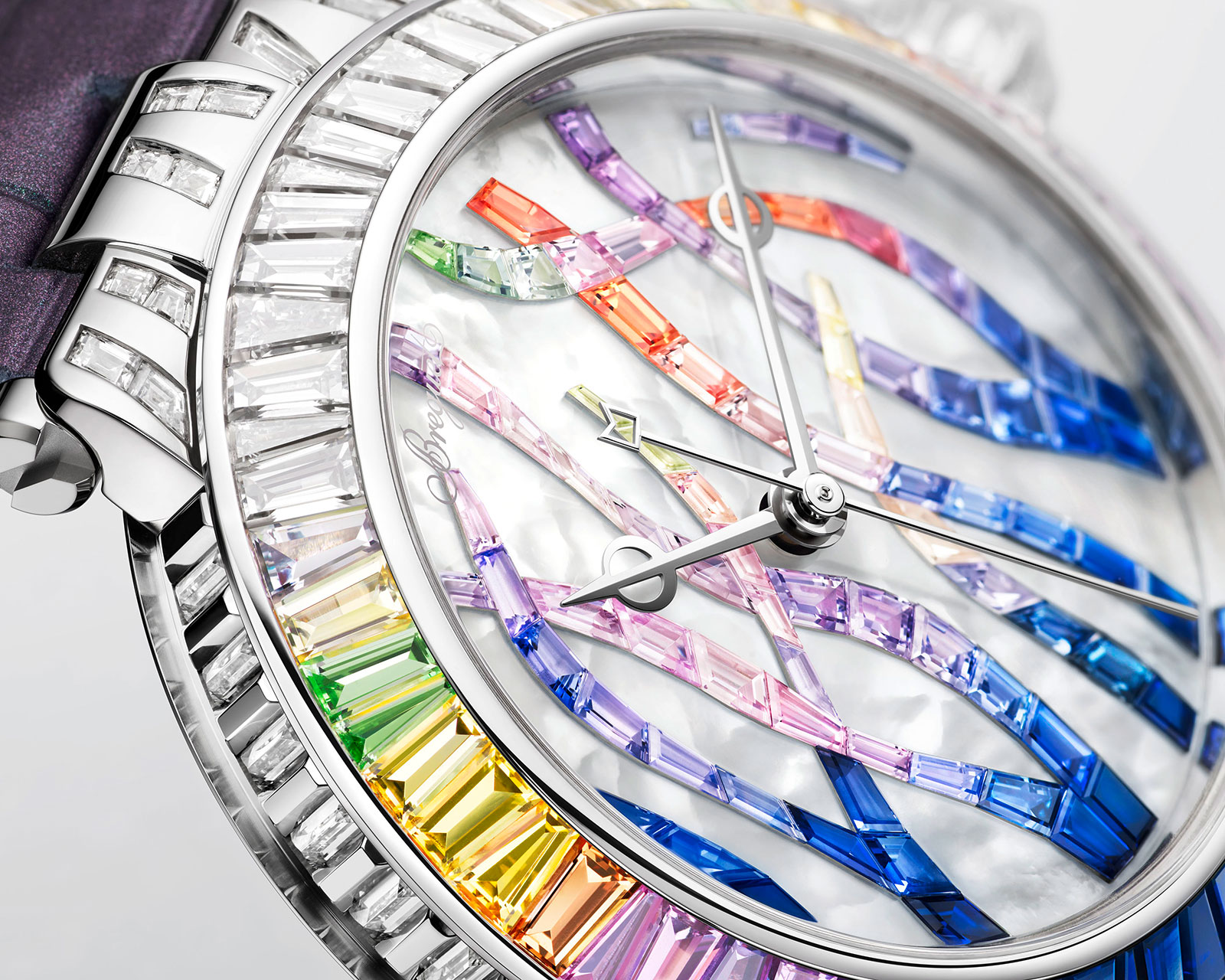 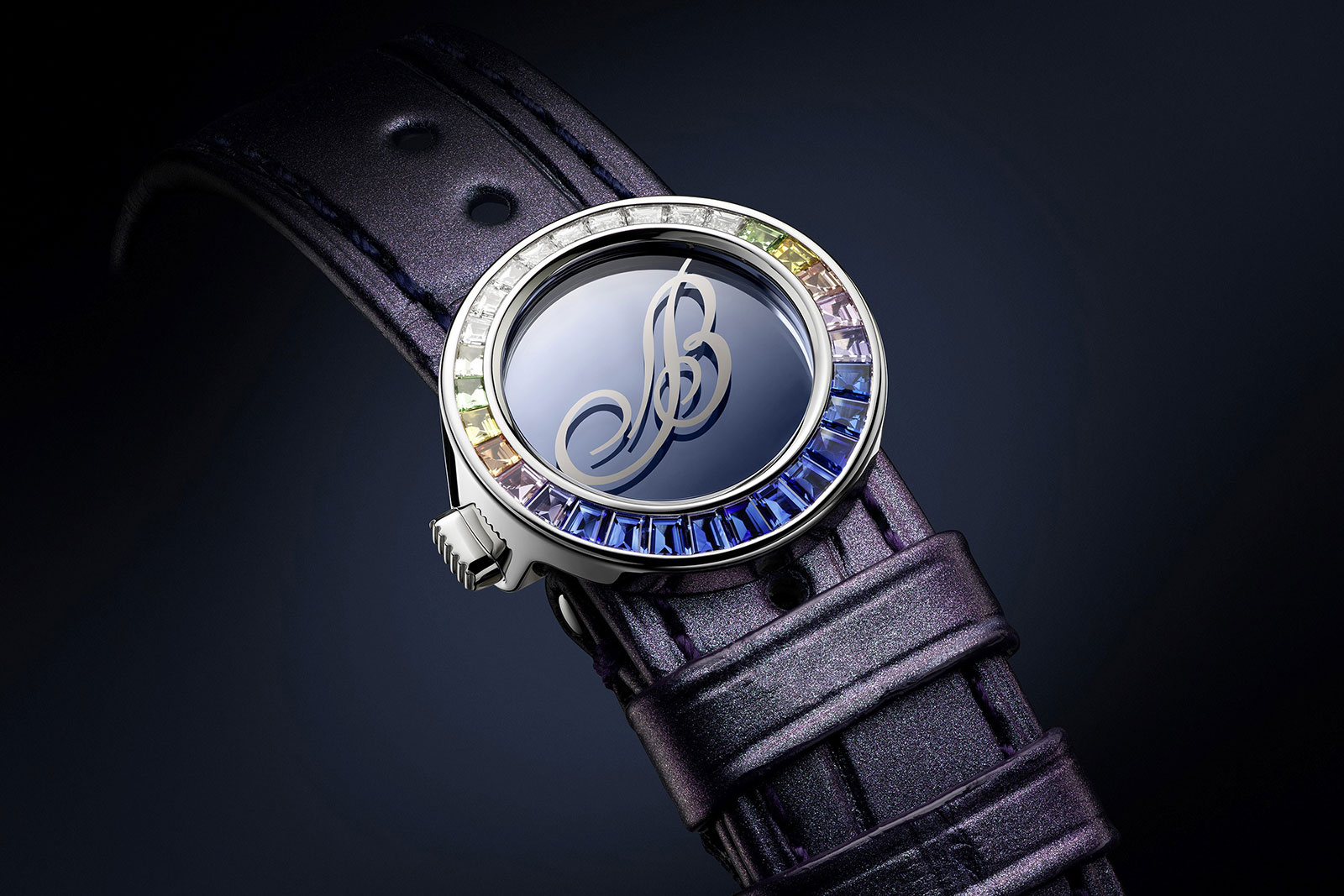 The folding clasp has a mirrored, metallic centre surrounded by baguette-cut gems to match the bezel, which are the only symmetrical gemstones on the watch

And then there’s the price. Broadly speaking, people who purchase such watches probably aren’t especially interested in reading the time, and are also probably not very price sensitive. The Poseidonia starts at 250,000 Swiss francs, which is a lot of money, but the going rate for a high-jewellery watch like this.

The diamond version is my favourite. With a colour that ranges from purple to brown to grey depending on the light, its dial is procured from black-lipped oysters around Tahiti and French Polynesia. Much rarer than white mother-of-pearl, Tahitian mother-of-pearl has a darker colour that better complements the ephemeral and mysterious qualities of Posidonia oceanica on the seabed.

In contrast, the other versions are vibrant and colourful. While they are certainly more eye catching, their whimsical nature are not as evocative of oceanic depths as the all-diamond version. 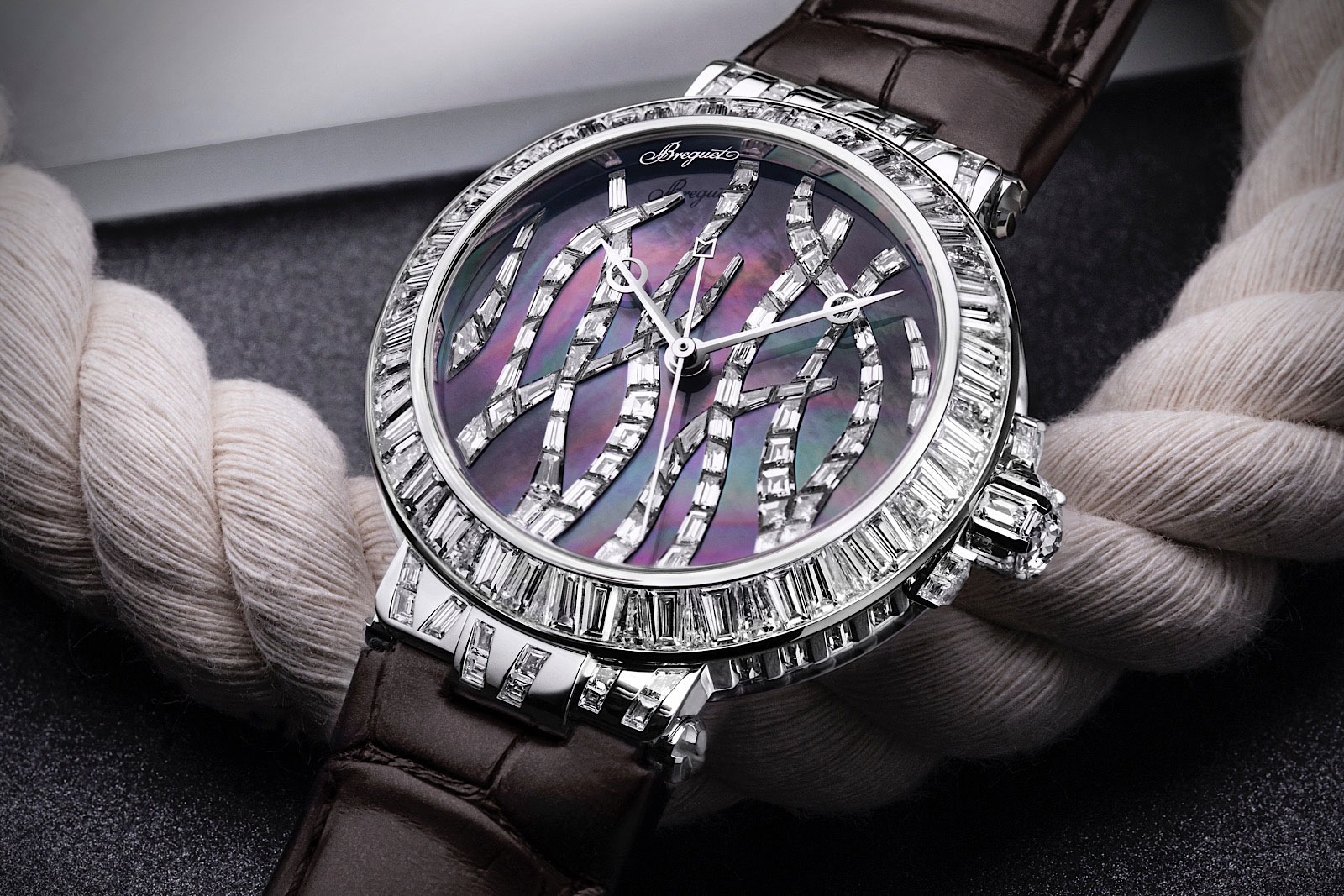 The Poseidonia is powered by the self-winding cal. 591C, doubtlessly finished in Breguet’s usual compelling style. And it s also equipped both the escape wheel and hairspring in silicon. 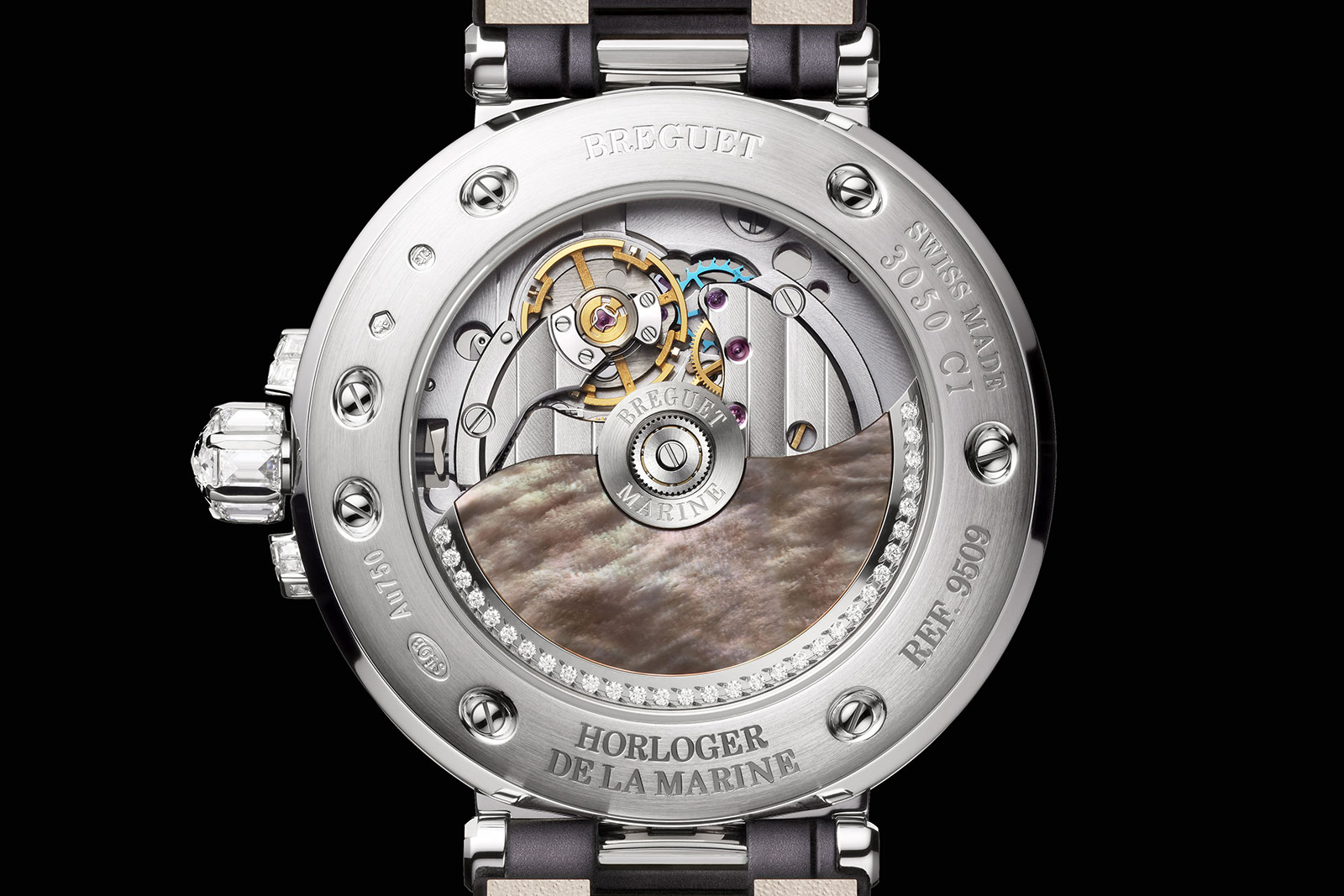 Notably, the wave-shaped, white gold rotor takes its cues from the dial – the centre is inlaid with the same mother-of-pearl that forms the dial, while its periphery is set with diamonds. And as with the movements found in other Marine models, the bridges have been finished with a variant of Cotes de Geneve modelled on the wooden decks of sailboats. The striping is more deeply etched and separated by a pronounced line. 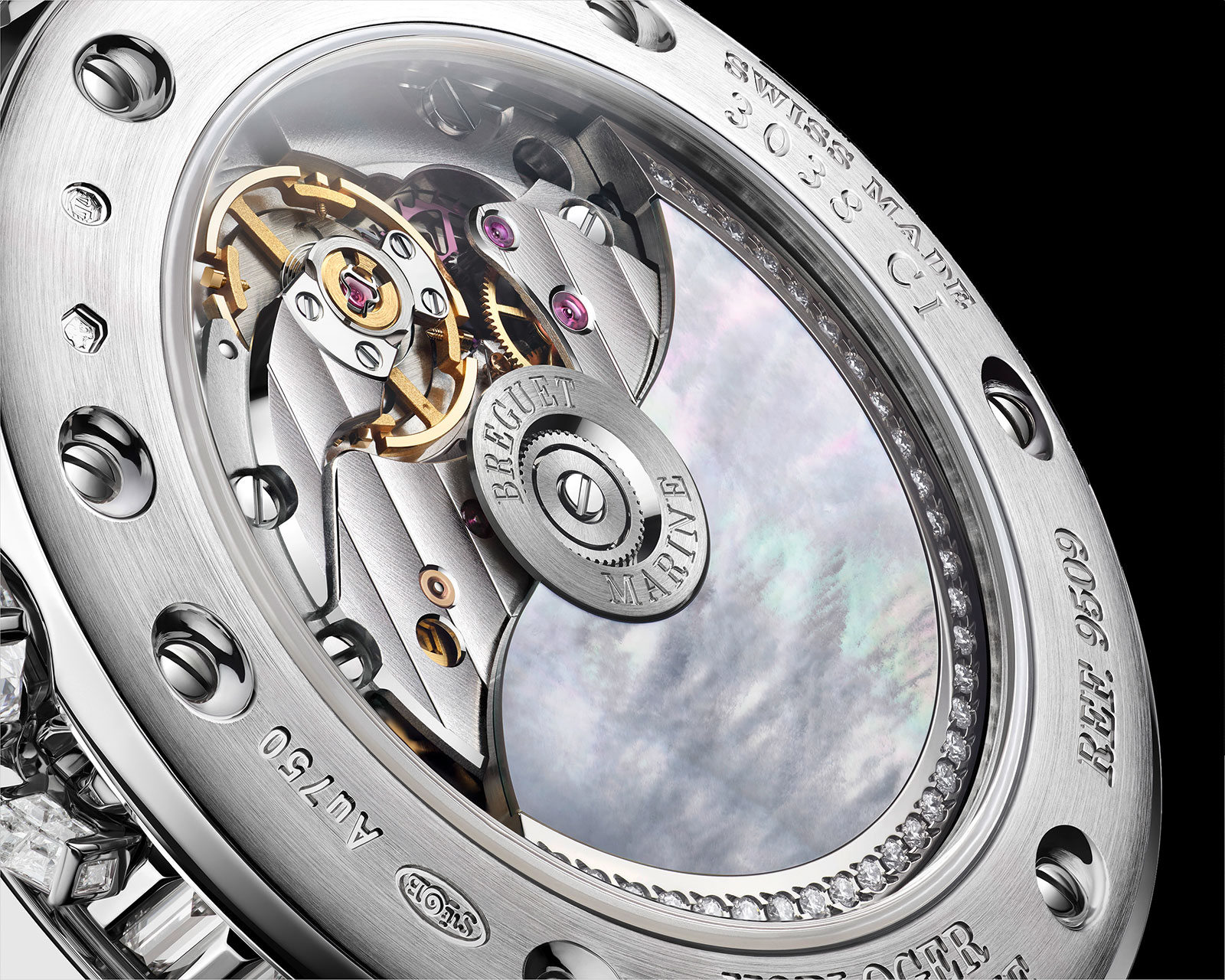 And, in a nod to Abraham-Louis Breguet who was chronometer maker to the French navy, “Horloger de la Marine” – or “Watchmaker to the Navy” – is engraved on the case back, exactly as it was on Breguet’s original timepieces from the 19th century.