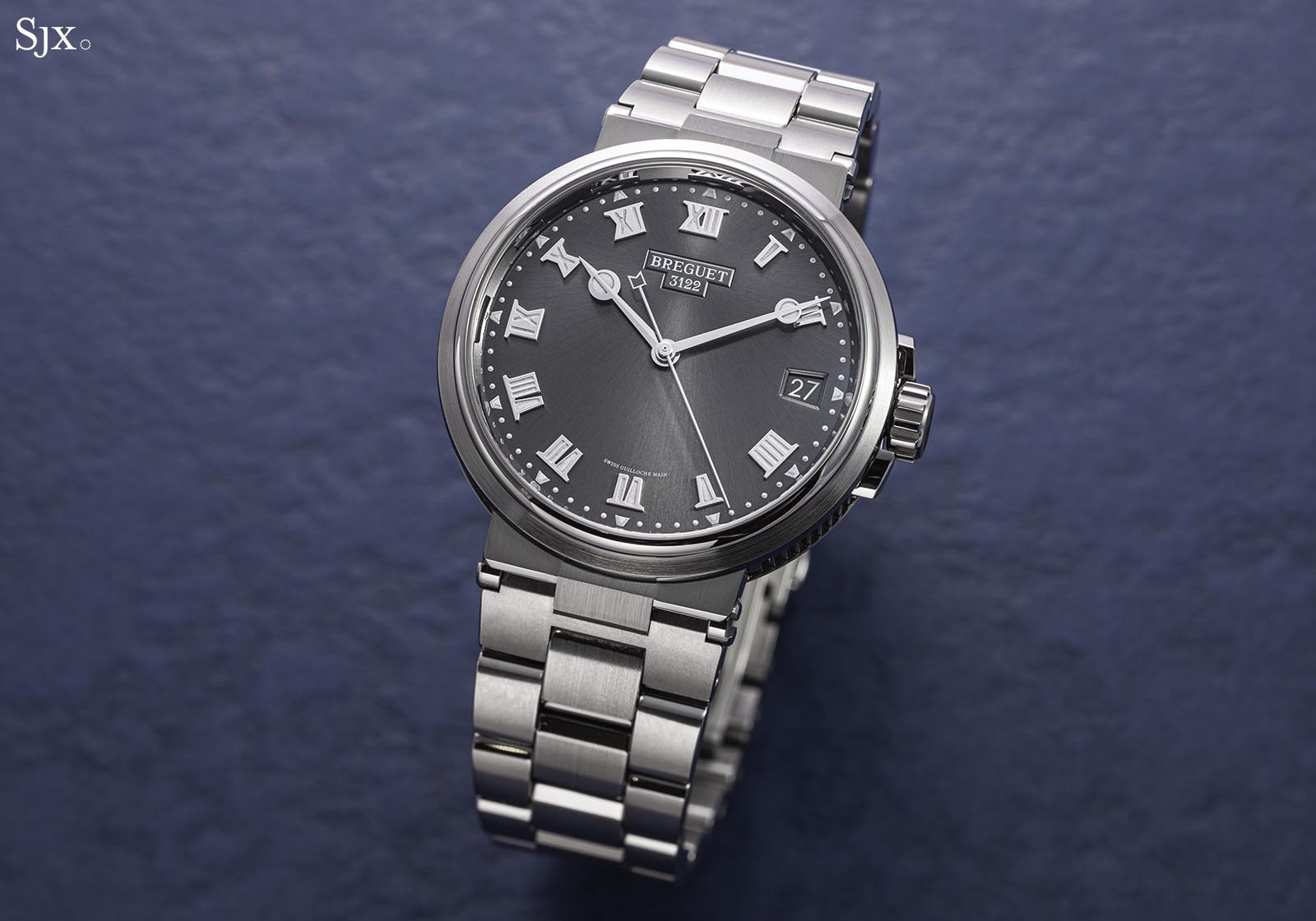 Breguet today is highly regarded for its watches that classically designed but often powered by innovative, high-tech movements, like the Classique Chronométrie 7727 with magnetic balance pivots, or the recent, elaborately finished skeleton tourbillon 5395. The brand is not, however, known for its luxury-sports watches (its line of Type XX aviator’s chronographs are entry-level and not quite sports watches).

But last year Breguet unveiled the latest – and best – version of its luxury-sports watch, the Marine 5517. An under-appreciated contender in the category, the new Marine more conservative in style than its competition, but built to an admirably high standard. The Marine 5517 in titanium with a matching bracelet

Unlike its competitors, Breguet was relatively late to the luxury-sports watch segment (though not as late as A. Lange & Söhne, which launched the Odysseus last year); the original Marine only made its debut in 1990. The model name was inspired by Breguet’s appointment in 1815 as Horloger de la Marine – clockmaker to the French navy, an appointment it held for over 150 years.

Designed by Jorg Hysek, perhaps the most famous watch designers of the 1990s, the first-generation Marine was distinguished by its fluted, domed crown, but otherwise looked pretty much like any other Breguet. That was replaced in 2005 by the second generation, a major redesign that gave it a more distinctive style. The practical robustness of the Marine, coupled with its affordability in steel, made it the brand’s bestselling model line. So it was a big deal when the revamp of the Marine began a little over two years ago, starting with the Marine Équation Marchante 5887 unveiled at Baselworld 2017. It was a complex watch incorporating an equation of time display alongside a tourbillon and perpetual calendar, but also revealed the new look of the Marine. A year later the rest of the line, from time-only to chronograph, received the same makeover, giving it a cleaner, sportier style, with the option of an 18k gold or titanium case.

But the titanium models were only offered with a rubber strap, until the launch of the matching bracelet last year, which takes the watch to a new level. The new titanium Marine with a bracelet is a surprisingly a strong contender in the fashionable genre of luxury- sports watches, combining a light-but-sturdy case, integrated bracelet, as well as a robust yet finely decorated movement. 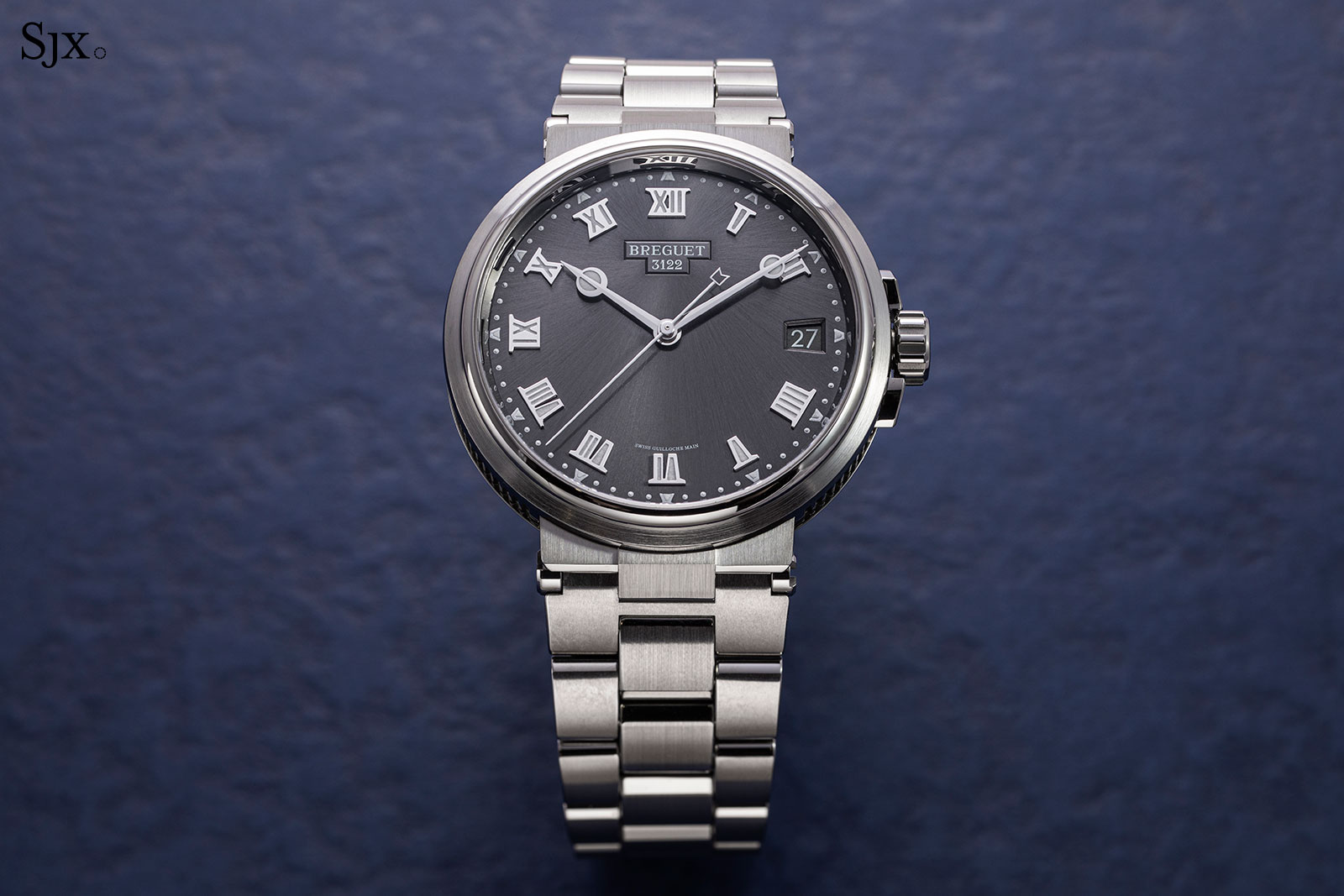 The quintessential Breguet style is an ornate, French look heavy on engine-turning, fluting and other frills – most of which don’t go well with sports watches. The new Marine takes a sharp turn away from all that – especially with the titanium model pictured here – and although it retains various signature elements, everything has been streamlined and simplified to suit the sporty style.

A hardcore fan of the old-school Breguet style would probably find the Marine over reduced and looking a bit bare, but the looks is handsome and it suits the purpose. At the same time, because the quality of execution is high, the Marine looks and feels like what it should be, which is an expensively made watch.

It is a relatively compact watch at just 40 mm wide, though its height of 11.5 mm is a tad thicker than the most famous luxury-sports watches that are usually wide but slim. However, its thickness does emphasise the architecture of the case, especially the detailing on the sides, and lends itself to a more complex design and finishing.

On the wrist it wears light and relaxed, while also looking quite discreet because of its size and colours. Granted, the Marine is not an iconic design like the Royal Oak, but that is the nature of Breguet’s house style. Instead the Marine is pretty much the opposite, a low-key luxury-sports watch. The most impressive aspect of the Marine is the attention to detail in the design and finish of the titanium case and bracelet. The finish is excellent; the design is clean and more modern than the typical Breguet, but still relatively classical as sports watches go.

While the earlier Marine models had traditional lugs, the new Marine has a proprietary lug design to accommodate its integrated bracelet, which improves the overall look significantly. Admittedly this particular style of lugs is not a crowd favourite, which is why it’s uncommon, but it works with the particular style of the Marine. The case is rated to 100 m, with a screw-down crown flanked by propeller-shaped crown guards that are a bit of an affectation, but well finished with polished bevels surrounding the brushed tops.

In contrast to the earlier generation of Marines that had wide, rounded bezels, the Marine 5517 has a narrow, stepped bezel, giving it stronger and more defined look. And the look is refined with contrasting surface finishes: the concave section of the bezel is polished while the base and top are brushed.

Similarly, the fluted case band – a Breguet trademark – is alternately polished and brushed. The contrasting finish is continued on the bracelet, where the outer surfaces are brushed – a practical, resistant finish for a sports watch – while the inner surfaces are polished for a subtle shine. Just a touch of guilloche

As opposed to the more elaborate, wave-guilloche dials found on the gold models, the titanium Marine has a cleanly designed dial in dark grey with a sun ray-brushed finish that suits its function and style. Though it is functional in appearance, the dial is luxe in construction, being made of solid gold with solid-gold numerals. And it even has a tiny bit of hand-applied guilloche.

The radial brushing emanates from the logo under 12 o’clock, which is framed by a border engraved with a rose engine, just like the decorative guilloche on standard Breguet dials. That bit of engine turning explains the “Swiss Guilloche Main” label at six o’clock, which translates as “Swiss hand guilloche”. 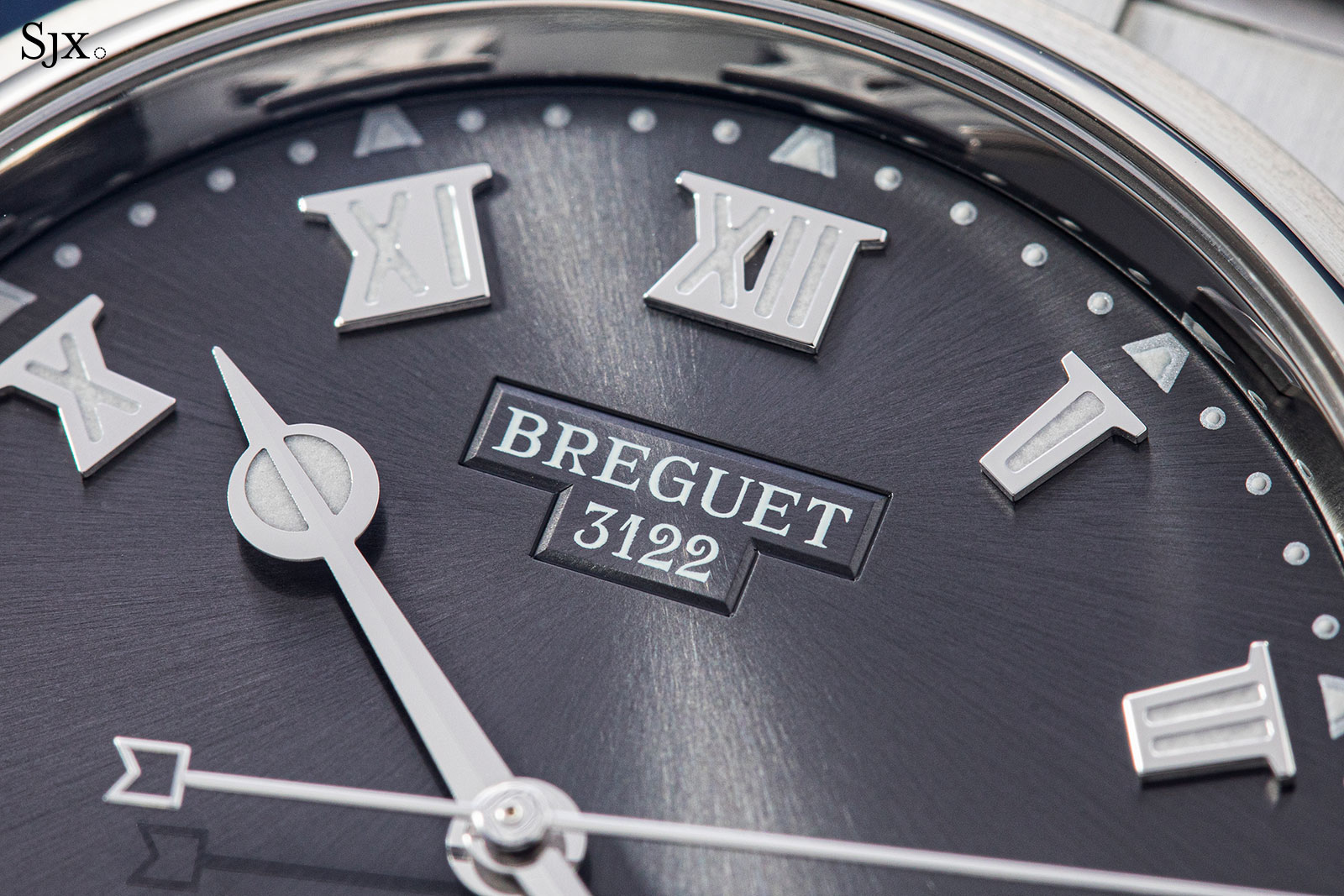 While the dial lacks guilloche, every other element on the dial is an elaboration on the traditional Breguet style, from the numerals and hands.

The hour markers are applied, taking the shape of Roman numerals and filled with Super-Luminova. Legibility is good, the overall look of the typeface is blocky, more due to the style rather than size of the numbers. 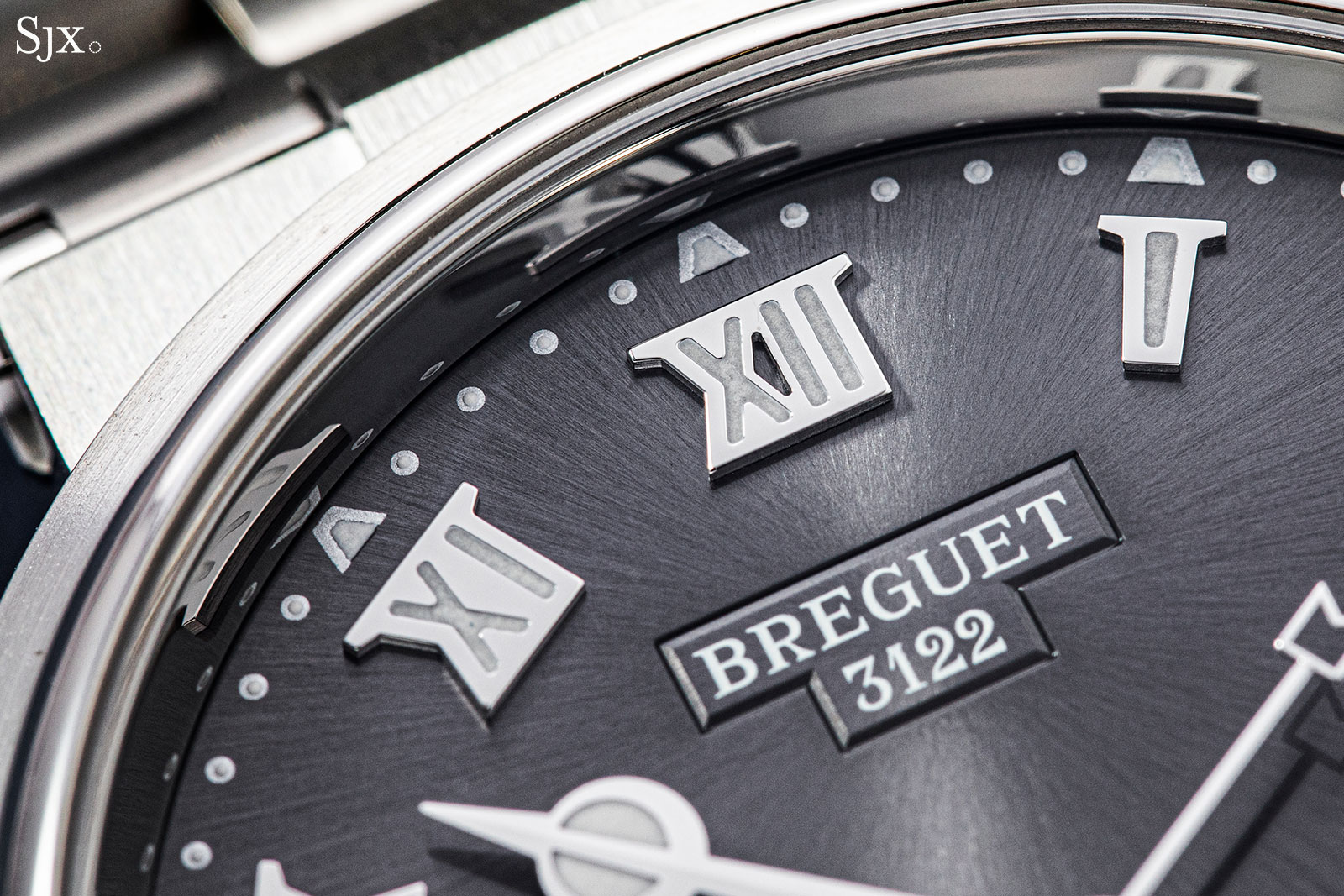 More interestingly, the hands are a modern take on traditional Breguet hands. Instead of the usual open tips, the tips are are half circles filled with Super-Luminova; and the counterweight of the seconds hand is shaped like a nautical pennant.

Each of the five-minute markers on the minute track are also shaped like maritime pennants, which is the only bit of the design that feels like it’s trying too much to be naval inspired. What is missing from the dial is the Breguet “secret signature”, a lightly etched Breguet logo devised in the 19th century to combat counterfeits. While it probably lacks an appropriate location because the dial has no guilloche, it is a quintessential Breguet detail that is missed. And a high-tech movement

Inside the Marine 5517 is the in-house cal. 777A, a less ornate variant of the cal. 777Q found in several models, including the recent Classique 5177.

The 777A in the Marine has simpler styling and decor, but retains all of the technical innovations found in the fancier 777Q. Amongst the decorative adjustments is the rotor: while the 777Q has an 18k yellow gold rotor decorated with hand guilloche, the 777A has a two-tone rotor that is still 18k white-gold, but open-worked to resemble a ship’s wheel. At the same time, the 777A also has simpler bridges, without the elaborate outlines found on the bridges of the 777Q. Intriguingly, the Cotes de Geneve, or Geneve stripes, that cover the bridges and balance cock have been modified for a nautical feel; instead of the artfully and lightly applied striping found on the 777Q, the movement in the Marine has deeply-etched stripes, deep enough the lines look engraved, which resemble the wooden deck of a ship. The look is novel and appropriate for the watch, but the heavy striping looks slightly too mechanical.

All of the components of the movement are carefully decorated with all details attended to. For instance, there is perlage on the base plate, polished and bevelled edges on the bridges, polished countersinks for the screws and jewels, as well as polished and chamfered screw heads. But the finishing is still slightly more basic than that found on the 777Q, although the difference is modest, and probably a necessity given the sporty nature of the Marine, and more importantly, its more affordable price. But in terms of tech, the 777A has it all. The escapement and hairspring are made of silicon, making them lightweight and more efficient, and also anti-magnetic. While such materials can be out of place in a haute horlogerie watch, they make sense in a sports watch.

And as is increasingly the norm with high-end movements, the balance is free-sprung, so there is no regulator index to adjust the length of the hairspring for regulation. Instead, regulation is done by adjusting the timing screws that sit in the recesses of the balance wheel.

All in all, the movement is decorated as well as the calibres found in comparable luxury-sports watches (with the exception of the Lange Odysseus that does it better), while having technical features that are superior. The Marine 5517 straddles both form and function across all levels. Importantly, it makes for a convincing sports watch both aesthetically and mechanically, while keeping Breguet’s signature flourishes intact. There is enough Breguet styling within for it to look like a Breguet, but not too much as to take away from its sportiness.

Every element of the watch, from the case and crown guards to the dial and hands, is well made. Crucially, the movement is also technically suited for a sports watch.

The Marine is priced at pretty much the same as the obvious rivals, which are truly iconic watch designs and naturally more popular, but in terms of quality the Breguet definitely holds its own. In fact, in certain aspects of construction or materials – the titanium case, solid-gold dial, silicon escapement, amongst other things – the Breguet trumps the competition.

Limited edition: No
Availability: Already at boutiques and retailers
Price: US$19,900, or 28,600 Singapore dollars

Doubling down on sports luxe.