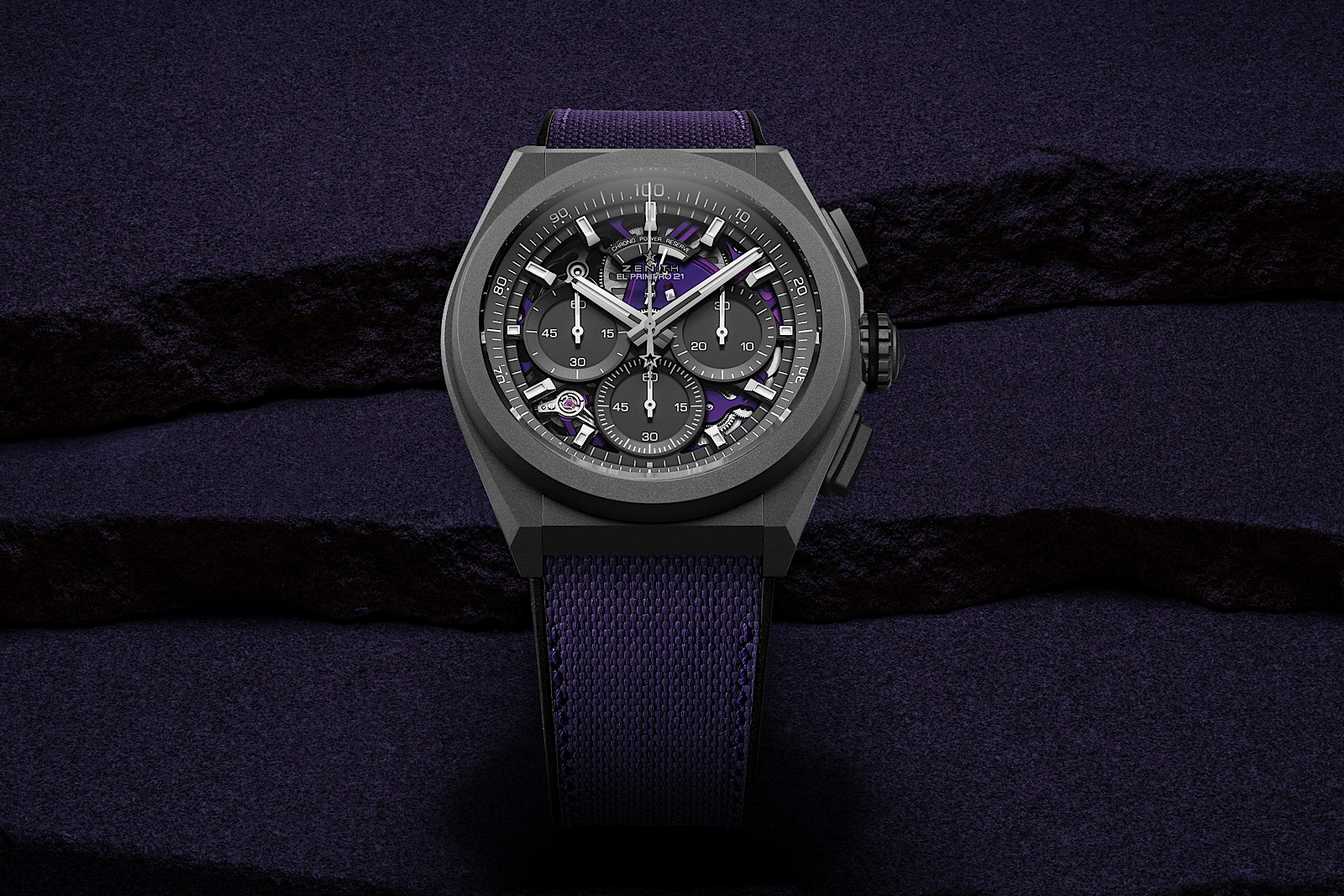 While Zenith occasionally looks into its famed attic for inspiration, the brand regularly shows off its innovation and forward-thinking sensibilities. Case in point – the new Defy 21 Ultraviolet.

The watch is dressed entirely in violet, a colour with one of the highest frequencies in the visible spectrum, making the livery a conceptual complement to the 1/100th-of-a-second El Primero 9004 inside the watch. 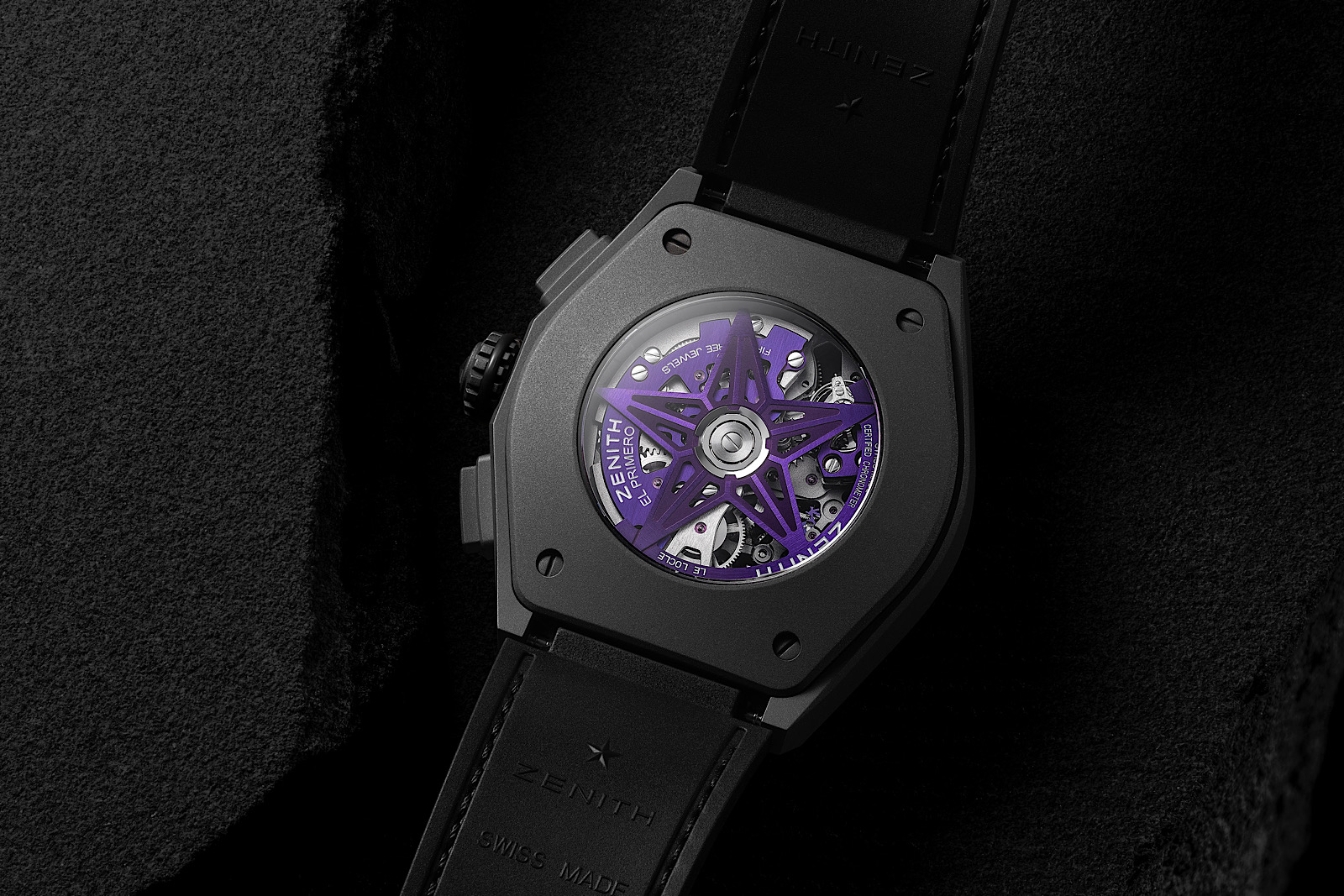 It never really struck me how uncommon the colour is in watchmaking until I saw the new Defy 21 (though the influencer and collector Amr Sindi has collaborated with several brands to create watches in the colour, and may have had a hand in conceiving the Defy 21 Ultraviolet).

A bold choice of choice, violet is used for the dial and strap, but also throughout the movement, making for a fun and casual watch, especially on the rubber strap covered in violet fabric.

Though the violet elements might seem loud at first glance, the colour isn’t actually too much. It’s a dark purple that’s more Imperial Rome than Joker from Batman. And it is essentially a two-colour watch in violet and dark grey; the use of a micro-blasted titanium case, helps to diminish the visual prominence of watch.

Colour aside, the Defy 21 is a strong value proposition – though it’s the best value in its simplest guise – offering a twin-oscillator, high-frequency chronograph movement for a relatively affordable price. Colour aside, the look is pretty much like the other versions of the Defy 21. It’s a big watch with a chunky case and an open dial with a highly technical appearance.

But here the open-working on the dial has been reduced, improving legibility. The Ultraviolet is one of the few Defy 21 chronographs with solid chronograph registers on a skeletonised dial, unlike the standard combination of open sub-dials on an open-worked dial. The sub-dials are also rendered in dark grey, creating a cohesive look with the case.

The case is tonneau-shaped, and a large 44 mm wide and 14.4 mm high, in part to the size of the movement. Like the Land Rover Edition launched earlier in the year, the case is titanium that’s been bead blasted to create a smooth, finely grained finish that matches the sporty and outgoing nature of the watch.

Despite the size, the watch wears light due to the case material, though if earlier versions of the Defy 21 are a guide, getting a good fit with the stiff rubber strap is a bit of a challenge. The biggest, structural components of the El Primero 9004 – namely the bridges and rotor – have been anodised to create a metallic, violet surface finish that changes in tone depending on the light and angle, adding a dynamic visual element to the mechanics. Notably, the purple movement finish has a hue that’s similar to the colour of the silicon escapement parts. 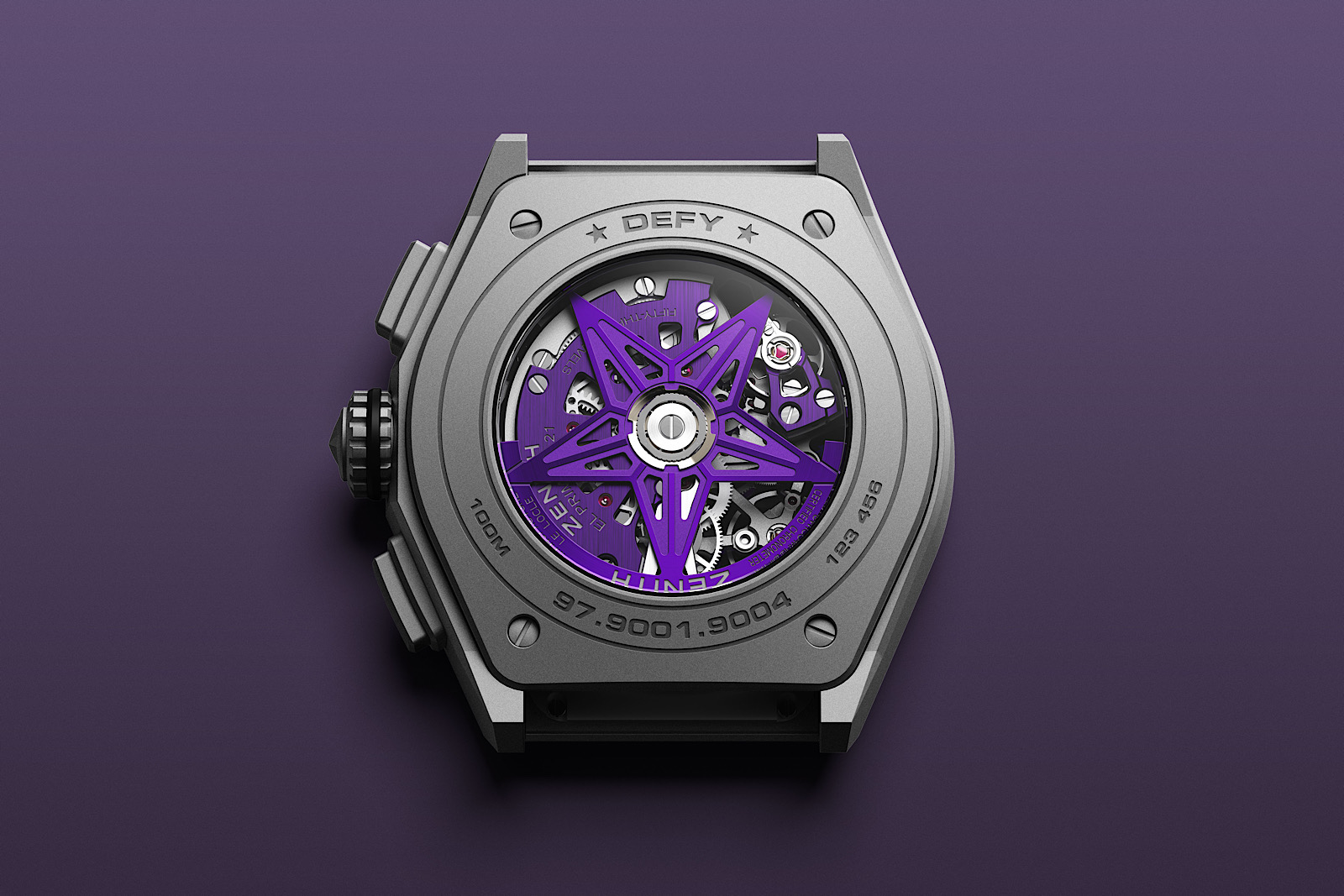 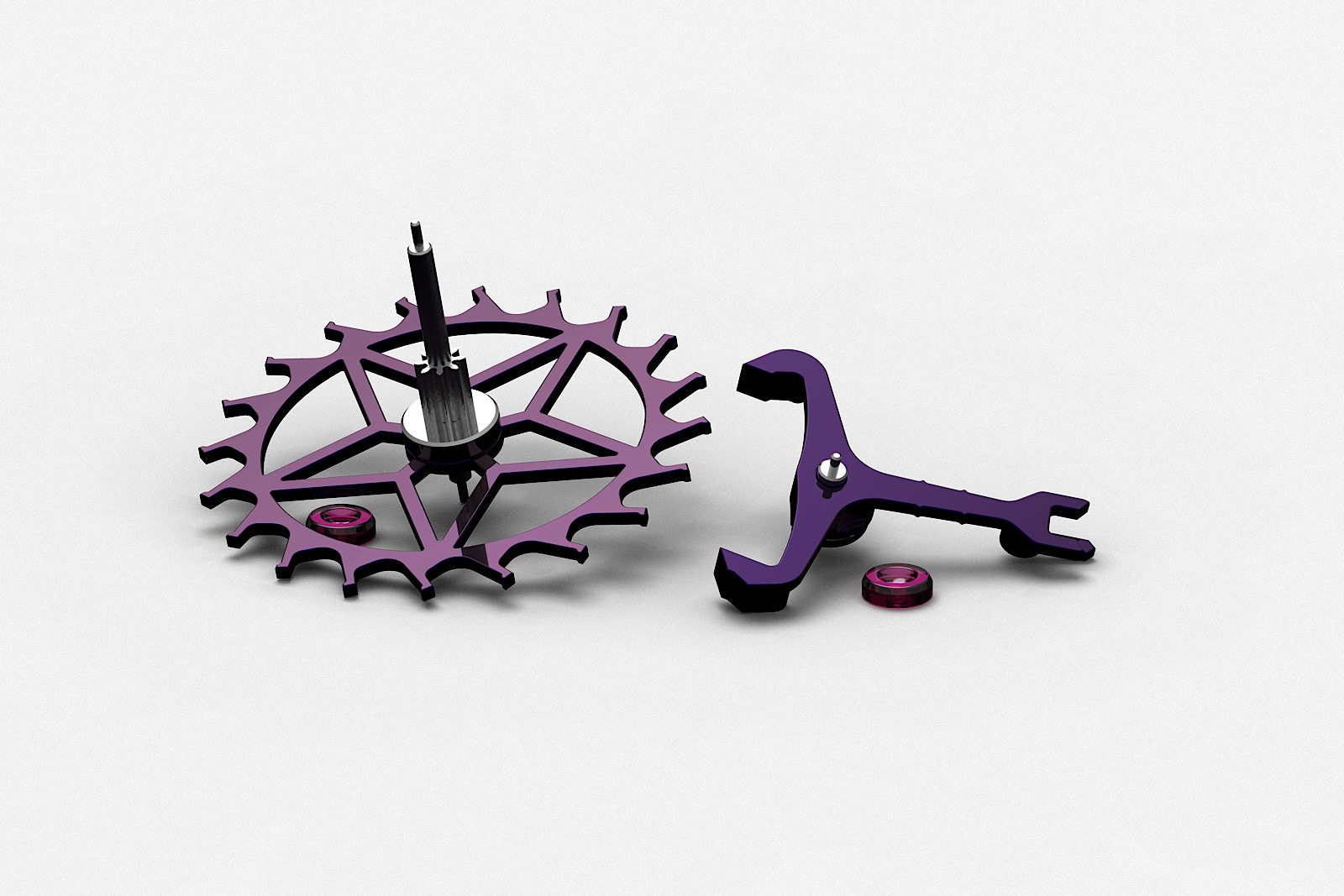 Other than the generous violet treatment, the movement is identical to the calibre that made its debut inside the Defy El Primero 21 in 2017.

Three years on, it remains a technically-impressive movement that is one of the highest-frequency chronograph movements on the market, allowing it to record elapsed times of up to 1/100th of a second (at least in theory, given user error). 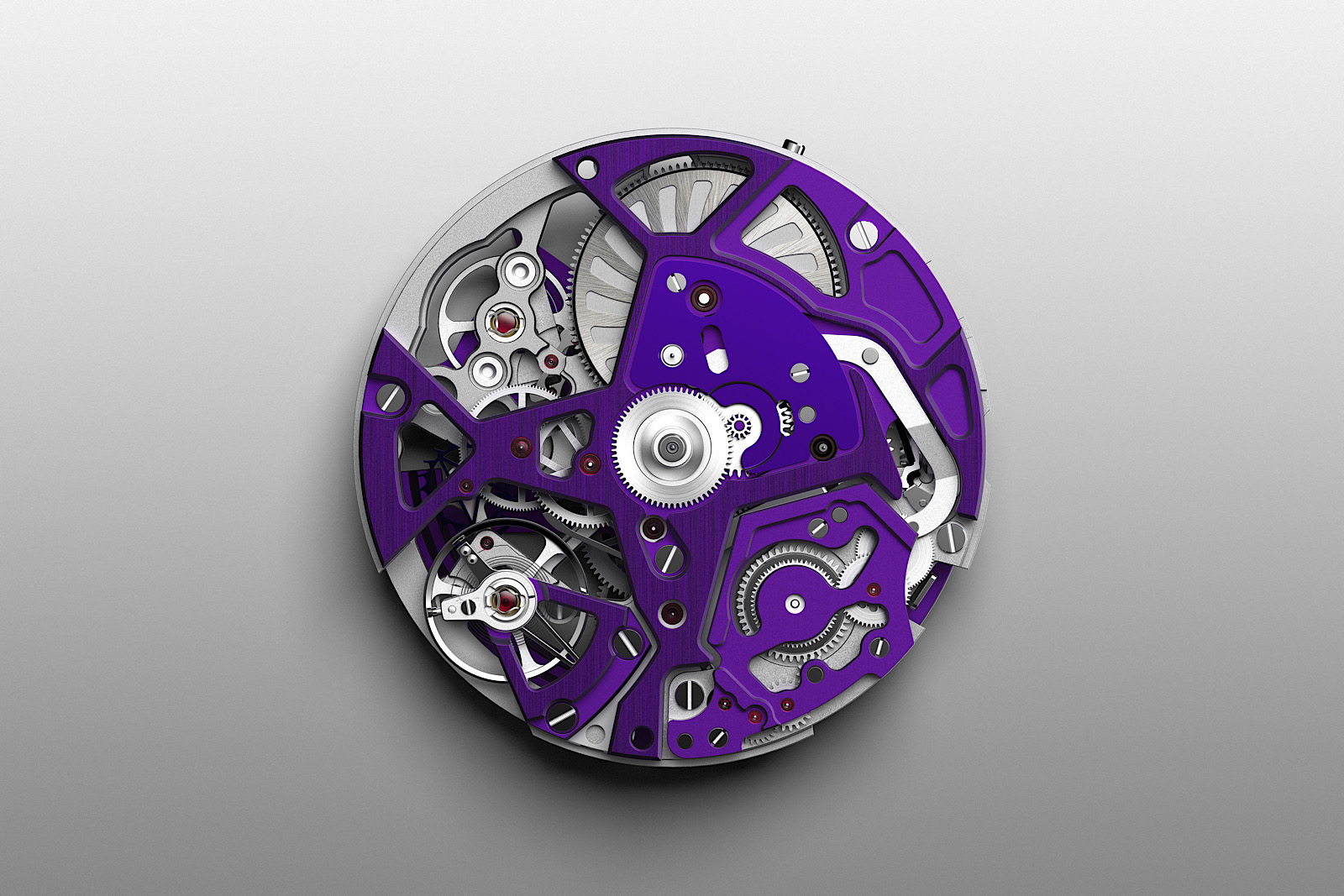 The reverse of the El Primero 9004

The movement has a “double chain” construction, which is essentially two movements in one. It’s equipped with two sets of balance wheels, gear trains, mainsprings and escapements, one each for timekeeping and the chronograph.

The timekeeping balance wheel runs at an conventional 5 Hz, while the chronograph balance blazes forward at 50 Hz once it is released. That drives the central seconds hand whiz around the dial once per second – which is very cool to watch. The immense frequency of the chronograph mechanism means it is energy intensive, and will run its mainspring flat in 50 minutes, something that’s shown on the power reserve indicator at 12 o’clock.

For Singapore, Indonesia and Malaysia. 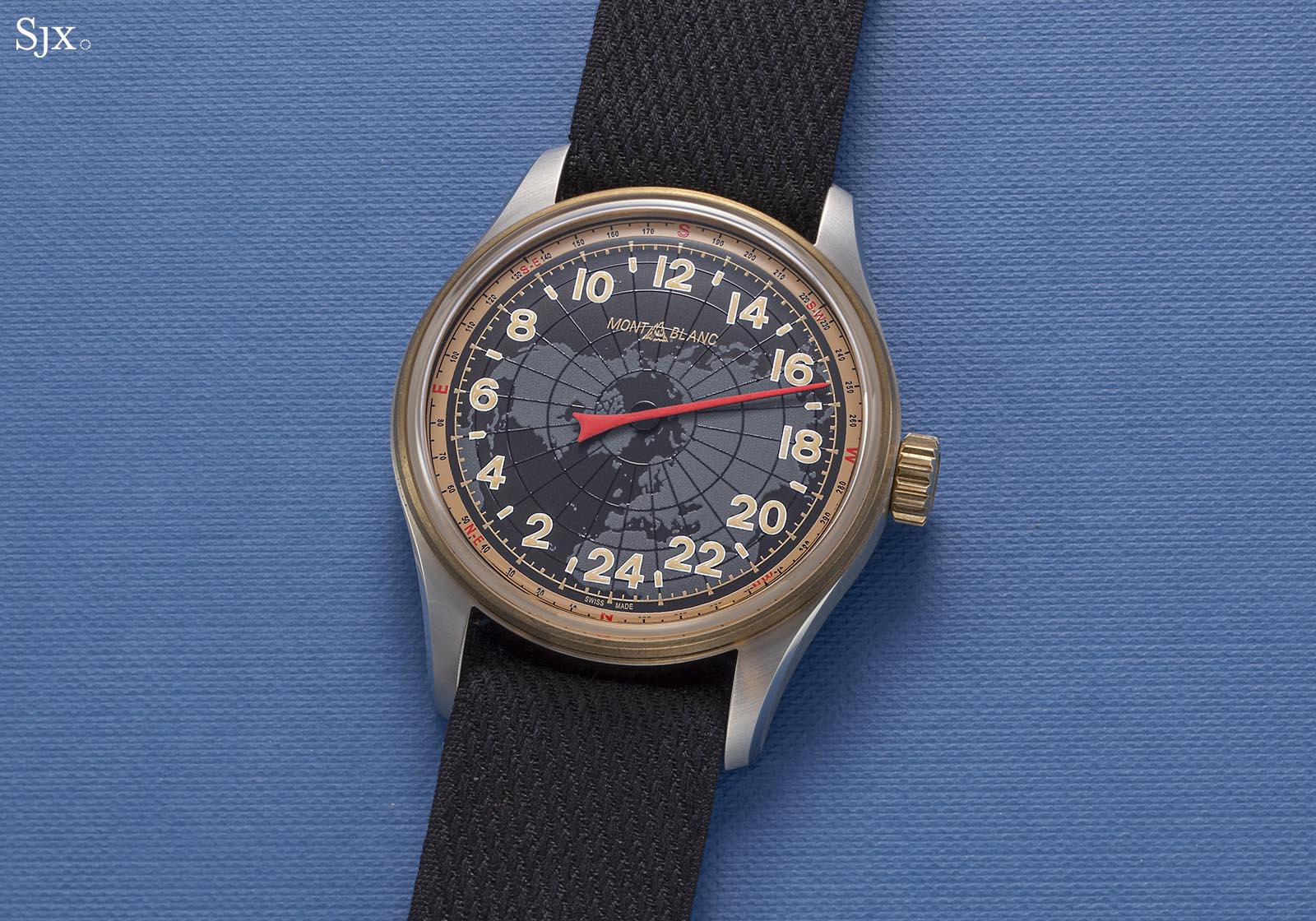 Now five years old, Montblanc’s 1858 collection has proven to be both on the nose and on the money – and the line-up now includes an unusual single-handed, 24-hour wristwatch that doubles as a solar compass.

From the entry-level automatic to the top-of-the-line split-seconds chronograph, the 1858 watches offer respectable value in their respective price categories, while possessing a pleasing balance of retro details reliant on clever use of tone, font, and finish. At Watches & Wonders 2020, Montblanc continued the theme, but with a twist, when it introduced the 1858 Automatic 24H.

Mechanically simple but functionally and visually unusual, the Automatic 24H doesn’t cost very much more than the base-model, three-hand automatic. Admittedly it only tells the time approximately, but the look and feel is reminiscent of an oversized vintage instrument, rather than just a vintage-inspired wristwatch.

In order words, it is probably the most interesting entry-level watch from Montblanc. In fact, it’s a compelling proposition in the broader sub-US$5,000 category, being more interesting than the usual fare in this price segment. 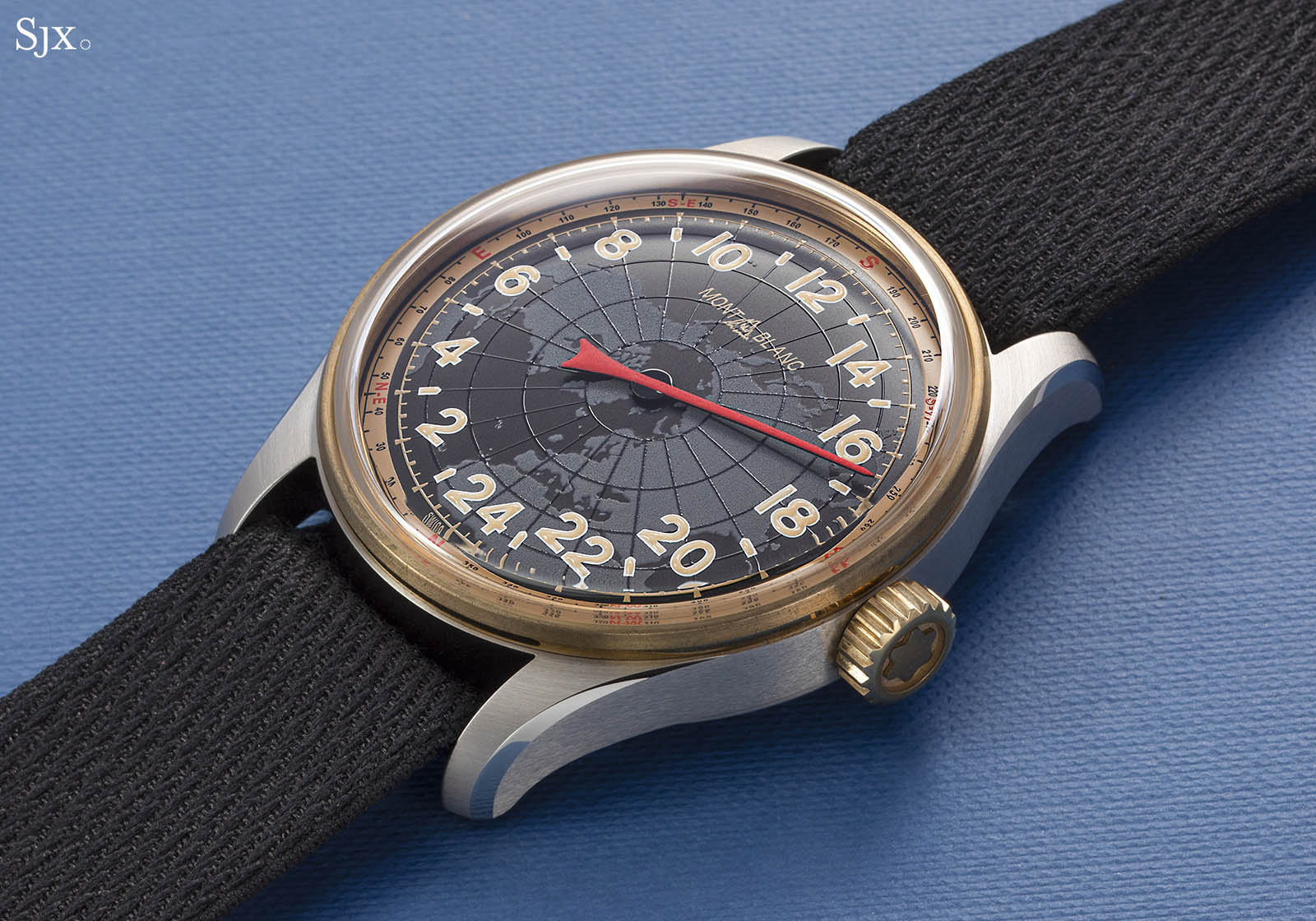 While not new, watches with a 24-hour time display where hour hand makes one revolution a day are uncommon, especially outside of specialised timers for professionals who operate on a 24-hour time such as pilots and astronauts. As a result, 24-hour watches are often no-nonsense instruments.

Such watches typically have three hands – for hours, minutes, and seconds – offering both an unambiguous representation of the hour as well as to-the-second precision. Amongst the best known of such watches is the Breitling Cosmonaute, which was worn by Mercury Seven astronaut Scott Carpenter when he orbited the Earth in 1962. Single-hands on 24-hour dials are even rarer, simply because they are less practical. Such one-handed watches are philosophical reflections on time, a reminder that time is passing; Audemars Piguet’s single-hand watch is appropriately named Philosophique. Needless to say, such philosophical instruments appeal only to a tiny number of people.

Beyond catering to a niche audience, the paucity of such watches also has to do with mechanics. Creating a single-handed, 24-hour display is not merely removing the minute hand. Most movements have an hour hand driven by an hour wheel that makes one revolution every 12 hours. Converting a movement to show time on a 24-hour scale involves small but important changes to the gearing.

As a result, while several brands have offered single-hand, 24-hour watches at one point or another, very few have done so for a substantial period of time. The extra work to modify the movement isn’t economical given the lukewarm sales. Like the basic 1858 Automatic, the Automatic 24H has a two-tone case made up of a steel case middle with the crown and bezel in bronze.

Slightly larger than the base model automatic, the Automatic 24H measures 42 mm across and stands 11.2 mm high, giving it good proportions for a sports watch – large enough but not too chunky. The relative slimness of the case is attributable to the lack of a seconds and minute hand. The case has a brushed top surface as well as flanks, divided by a polished lengthwise bevel. It is topped by a domed crystal so as to resemble Plexiglas on vintage watches. While domed crystals are common in retro-style watches, here it works especially well in creating the feel of a vintage instrument, rather than just an old-fashioned wristwatch. 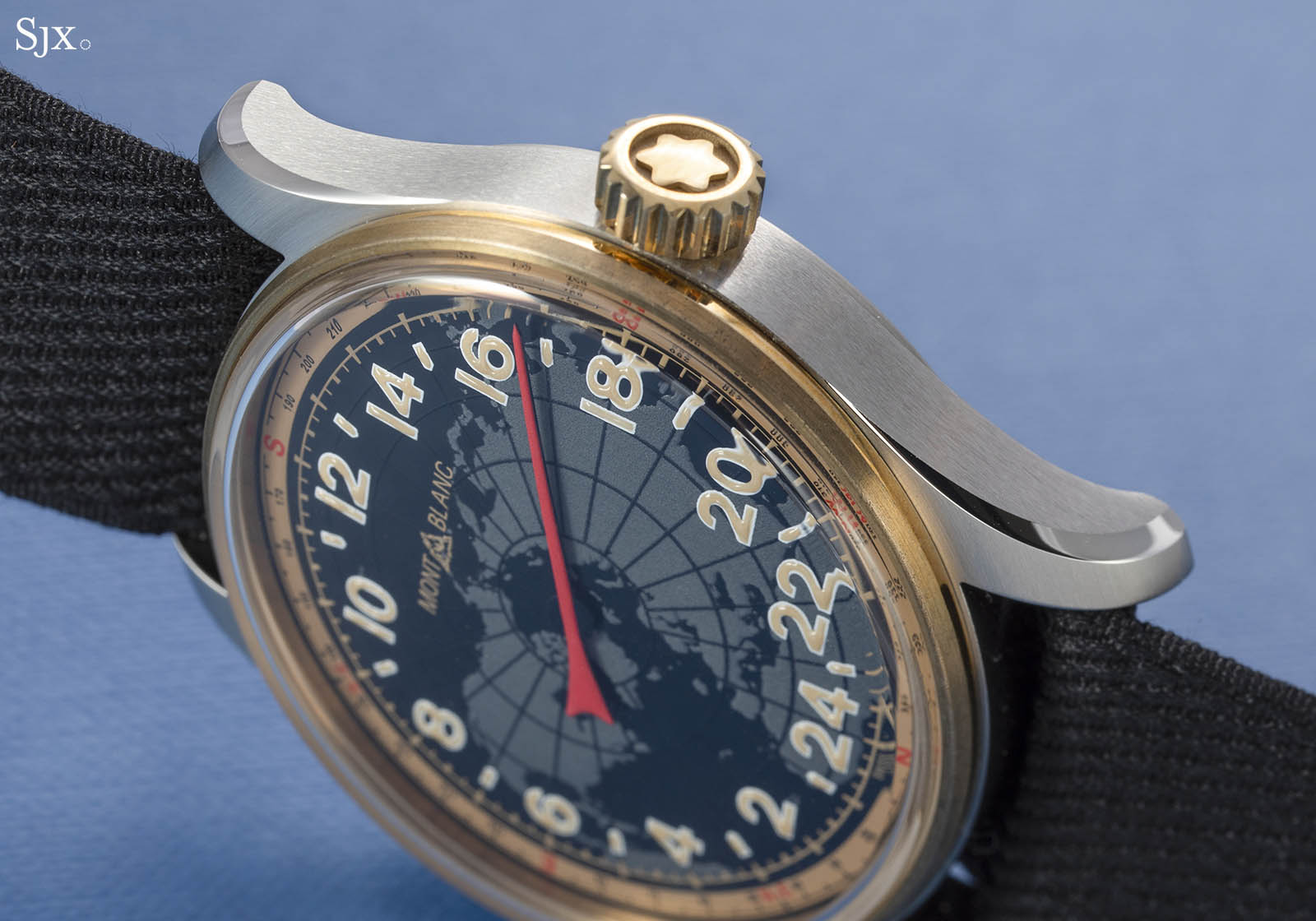 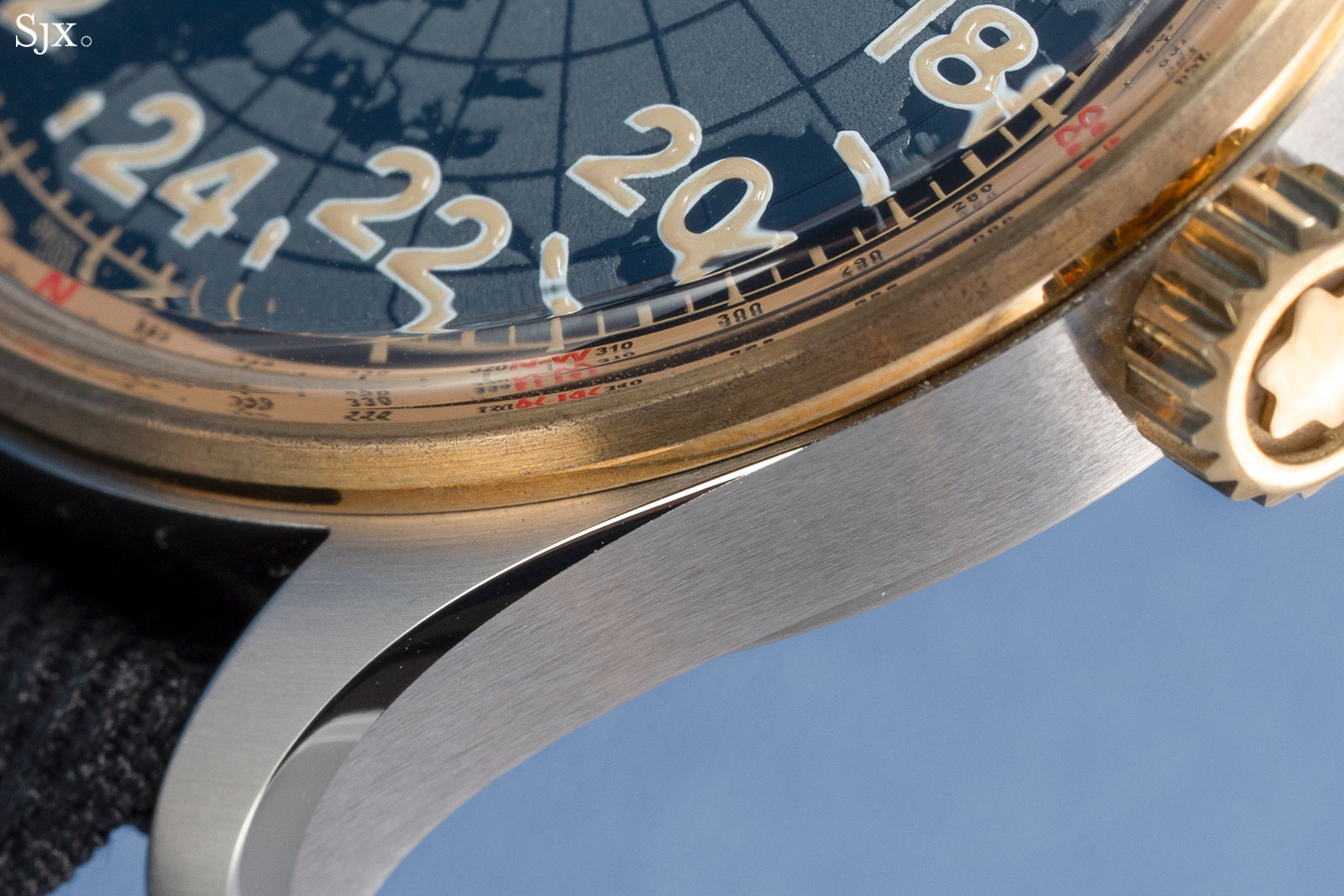 A key element in the wrist-instrument look is the dial. Expansive but wonderfully detailed, the dial features a map of the Northern Hemisphere, basically what you would see looking at the Earth from the North Pole, as well as the 24 meridians (or lines of longitude) – all printed in black Super-Luminova. The map and lines appear dark grey during the day, and faintly glow a dull green at night. Lines of latitude and longitude printed in black Super-Luminova Time is indicated on an extra-large 24-hour scale via a lone hour hand coated in red Super-Luminova. Importantly for a single-hand display, the size, length, and tip of the hour hand are correct. The hand is long enough, with a sufficient sharp point, such that reading the time is easy – at least approximately.

Though the hour scale is graduated in 15-minute sections, the time can still be read to the midpoint of each graduation, or about 7.5 minutes. In addition, the watch can serves as a makeshift compass with a copper-coloured scale on the periphery with the cardinal points in red that’s graduated in five-degree segments.

To use the dial as a compass, simply set the watch to the correct time, then hold the watch parallel to the ground and rotate it on the same plane until the hour hand points to the Sun. The cardinal points on the dial will then be correctly aligned and form a compass indication.

The above holds only in the Northern Hemisphere; in the Southern hemisphere, the cardinal points are inverted as the Sun appears to travel in the opposite direction. As a result, true North in the Southern Hemisphere would be “S” on the dial, East would be “W”, and so on. Also, the watch-as-compass method to determine direction is more accurate at higher latitudes as it gets more difficult to discern the movement of the Sun nearer the equator. The compass dial is an interesting but useless gimmick. Technically, any watch with an analogue display can be used as a compass, but it is simply more convenient and legible with a single hand and 24-hour dial, especially one marked with cardinal points.

The Automatic 24H is powered by the MB 24.20, which based on the Sellita SW300, in turn a clone of the ETA 2892. The appeal of the movement is straightforward – reliability and cost-efficiency.

Though the movement is commonplace, the modification is proprietary. The calibre has been modified by Montblanc for the Automatic 24H, as the Sellita catalogue does not have an SW300 with a 24-hour display.

The 1858 Automatic 24H is smartly executed and creative approach to a unique yet simple and affordable watch. It’s a world away from the base-model 1858 in looks and function, but only marginally more expensive.

With 24-hour watches being rare, the Automatic 24H only has one real competition in the same price bracket, the Longines Twenty-Four Hours, which has three hands and costs a tad more. But like most 24-hour watches, the Longines is staid and monochromatic, being a remake of a 1950s watch produced for the pilots of Swissair.

The Automatic 24H, on the other hand, is more adventurous and unusual. Part of its appeal lies in the widely-held nostalgia for vintage instruments, but the details and colours are put together in a refreshing and appealing way. Limited edition: No
Availability: At Montblanc boutiques and online store, as well as authorised retailers
Price: US$3,030; or 4,470 Singapore dollars