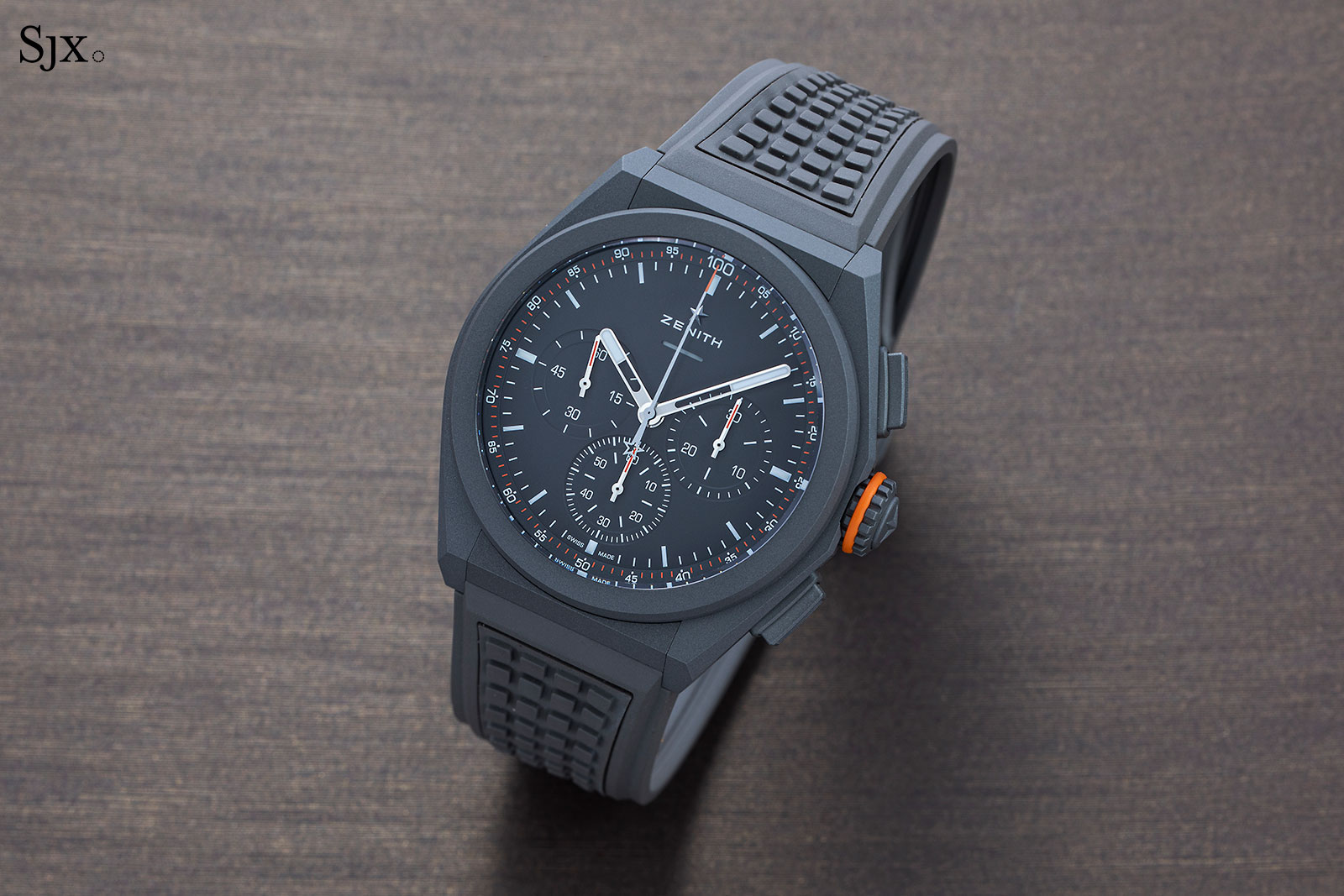 The Zenith Defy 21 is unquestionably strong value for money – a 1/100th of a second chronograph starting at just over US$10,000 for the base model in titanium. But most of the iterations of the Defy 21 so far have a highly technical look, combining a skeletonised dial with a large, angular case.

Now the Defy 21 design has taken a sharp turn in another another direction: with the help of Land Rover, Zenith has given it a makeover, creating the minimalist and functional Defy 21 Land Rover Edition.

While automotive-inspired watches are often over designed, the Defy 21 Land Rover Edition has been redesigned in a simple and effective manner; the watch has been streamlined and pared back, giving it a slightly military look that works. The styling is a nod to the 2020 Land Rover Defender, the most no-nonsense of the British carmaker’s offerings that was launched in late 2019.

To start with the case is micro-blasted titanium – finished with a finer-than-usual frosting that is faintly granular, in contrast to the coarser frosting that is more commonly applied to titanium. The surface is smooth enough that is resembles a coating, but it is natural titanium. 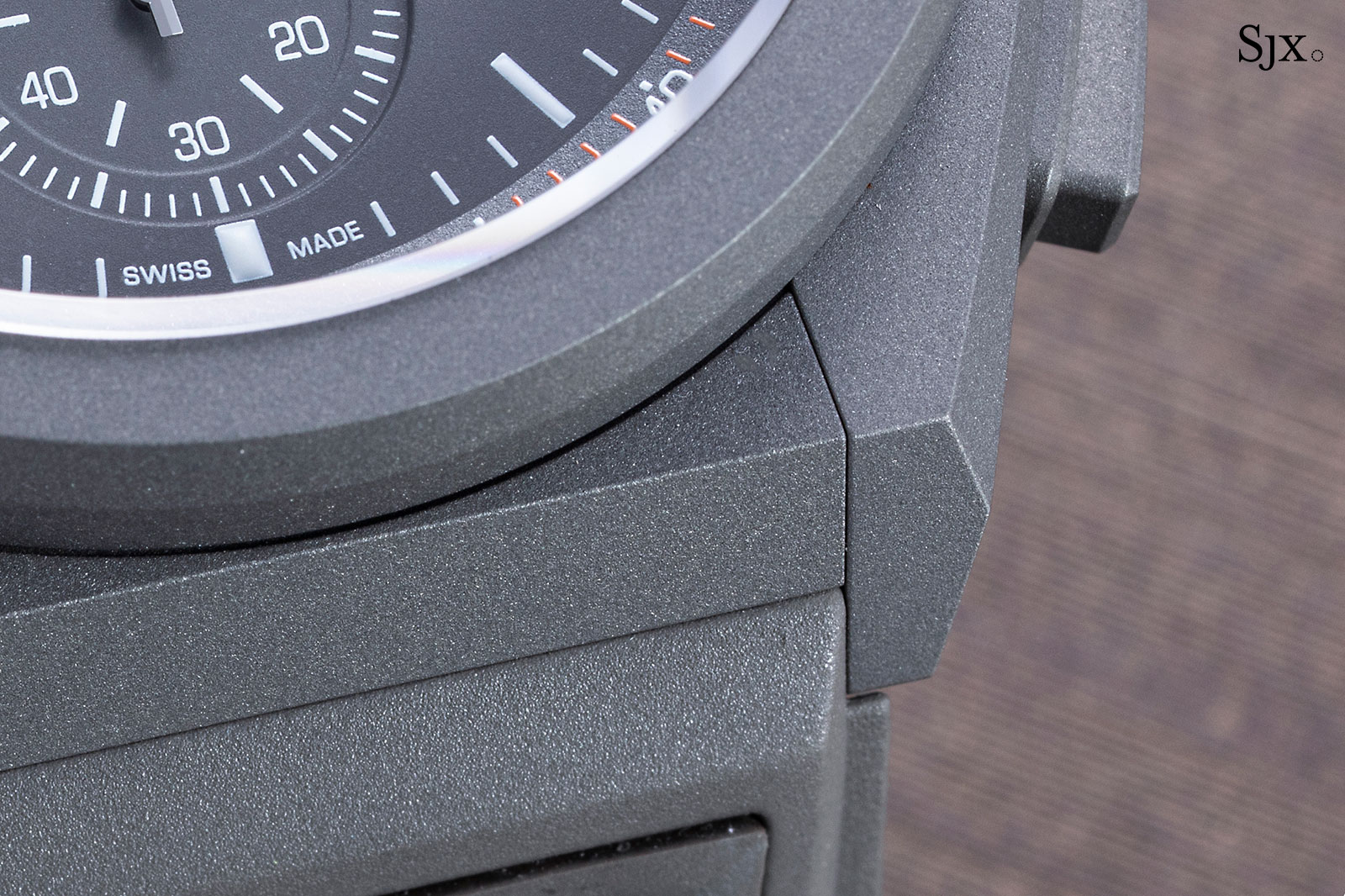 The simplicity of the case finish is appealing, because it suits the chunky, angular form of the case. But it is also practical, because it reduces the perceived size of the case, which is large at 44 mm by 14.4 mm. But being titanium, the case is fairly lightweight and wears comfortably, though the strap and folding clasp take a bit of adjusting to get just right.

One bit of the case that is unnecessary is the orange washer around the crown, an accent intended to match the orange on the dial. It makes the crown more visually prominent than it should be. 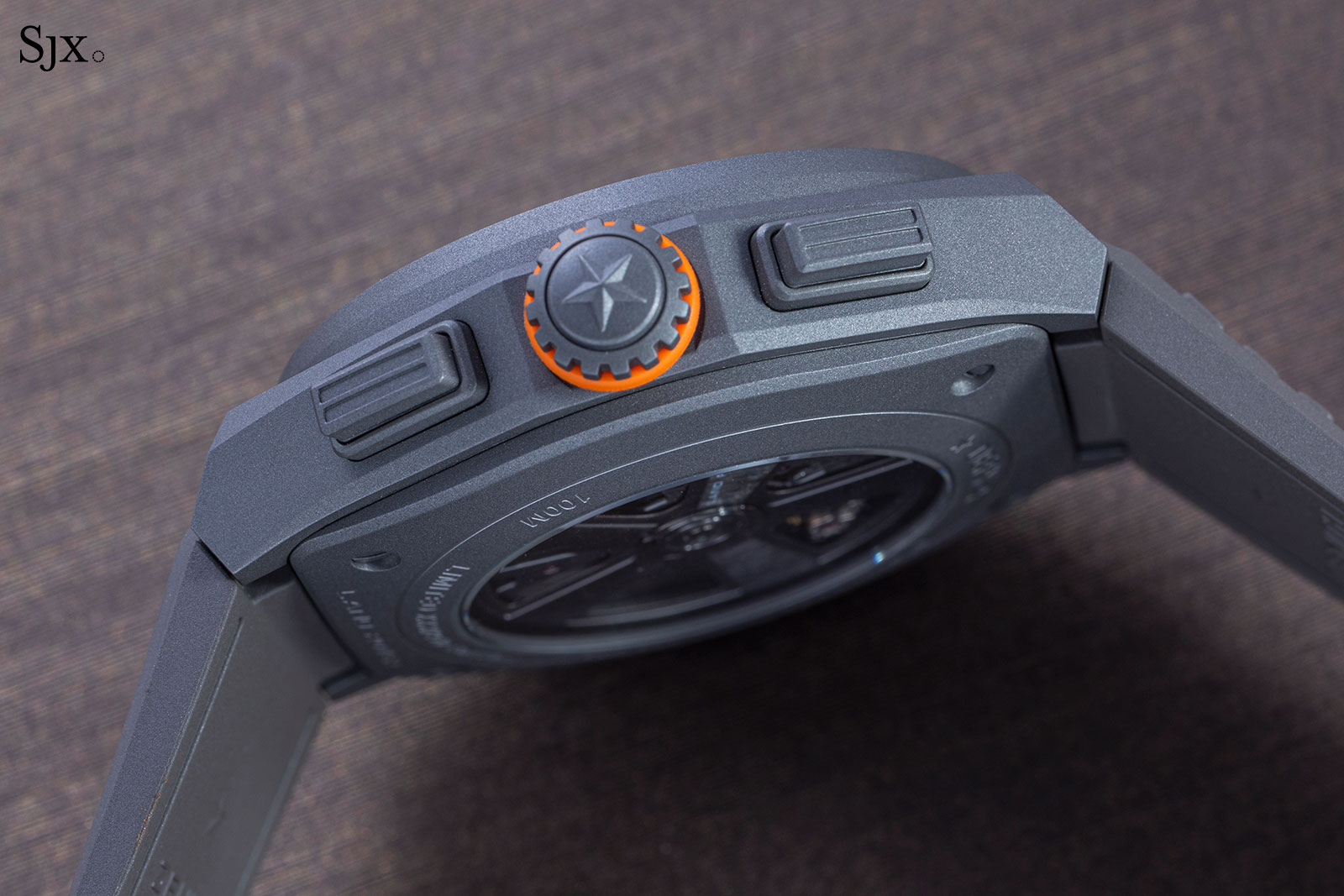 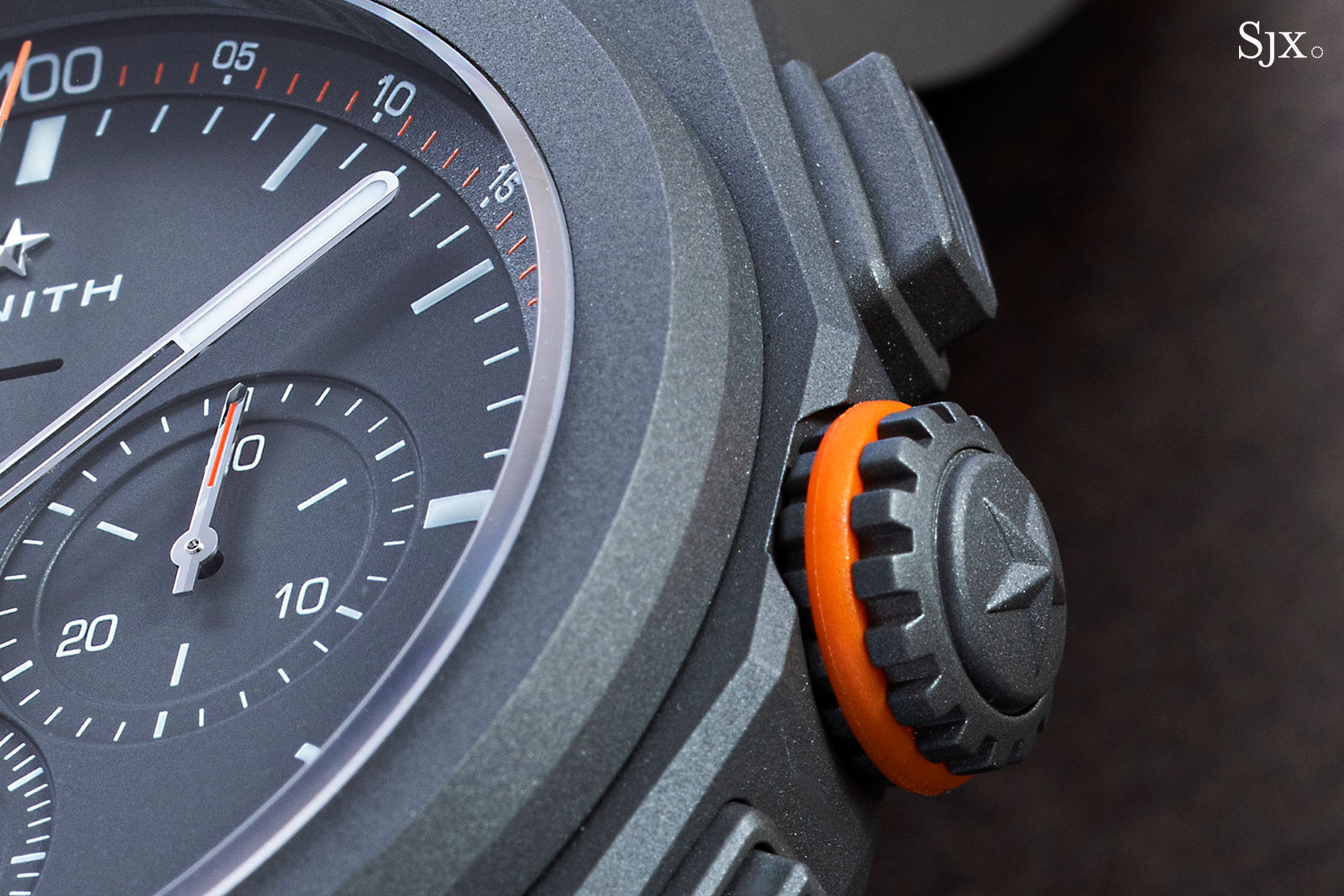 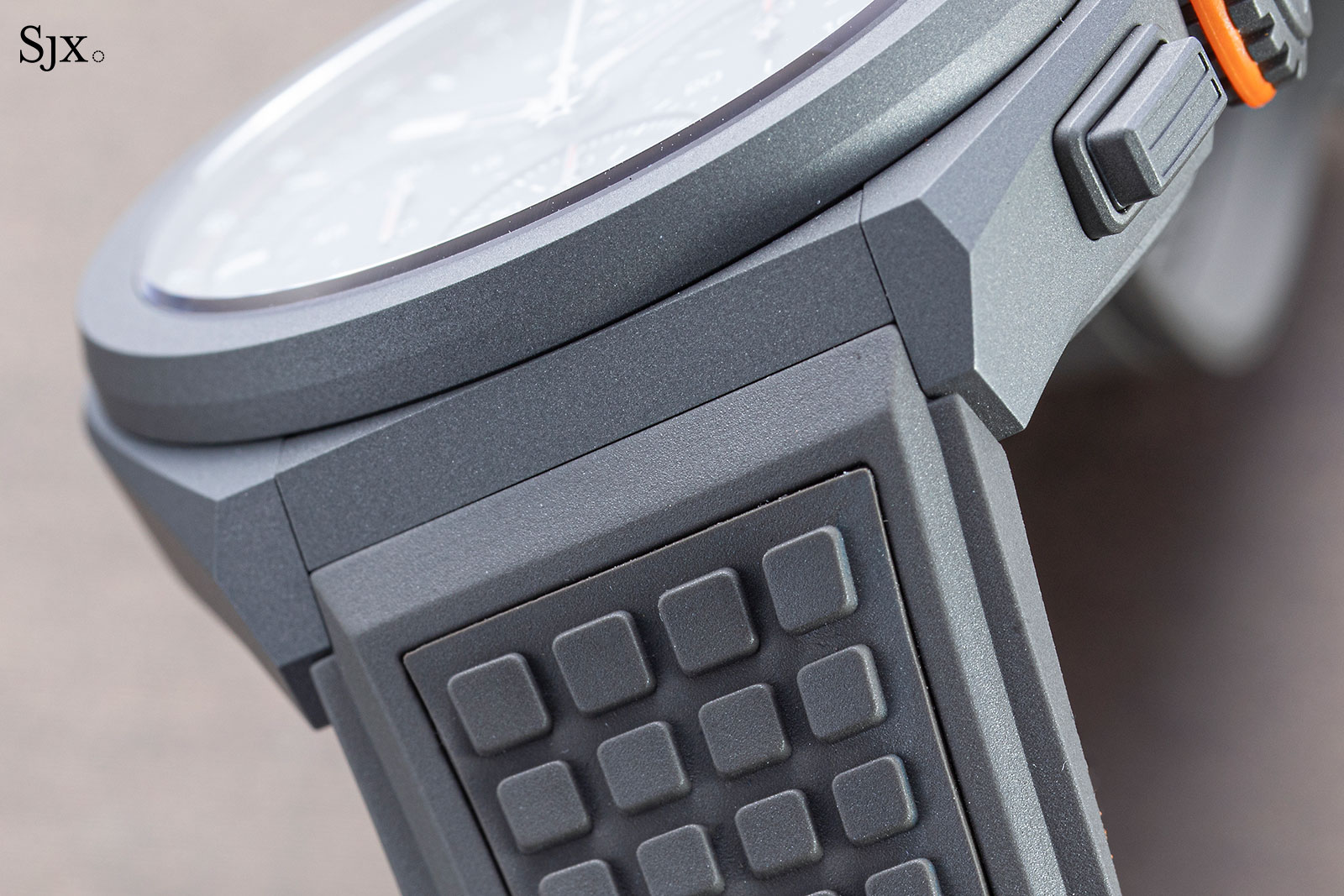 Similarly, the dial has been smartly simplified. While the original Defy 21 emphasised the construction of the movement – particularly with the open-worked dial revealing the twin balance wheels and a large power reserve display – the Land Rover Edition instead emphasise the legibility.

The attention to detail in the redesign is significant; even the hands and power reserve display have been revamped, with the only bits carried over from the standard model being the chronograph hands. While the hour and minute hands on the standard model are wide and angular, the hands here are rounded and no nonsense. The hour marker are small and printed on the dial, as are the markings on the chronograph registers. Notably, the registers are recessed on two levels, giving the dial a bit of depth, and preventing it looking too wide and flat.

And the dial has the seconds track and chronograph hands in orange, giving it enough colour to be interesting, without distracting from the simplified design. 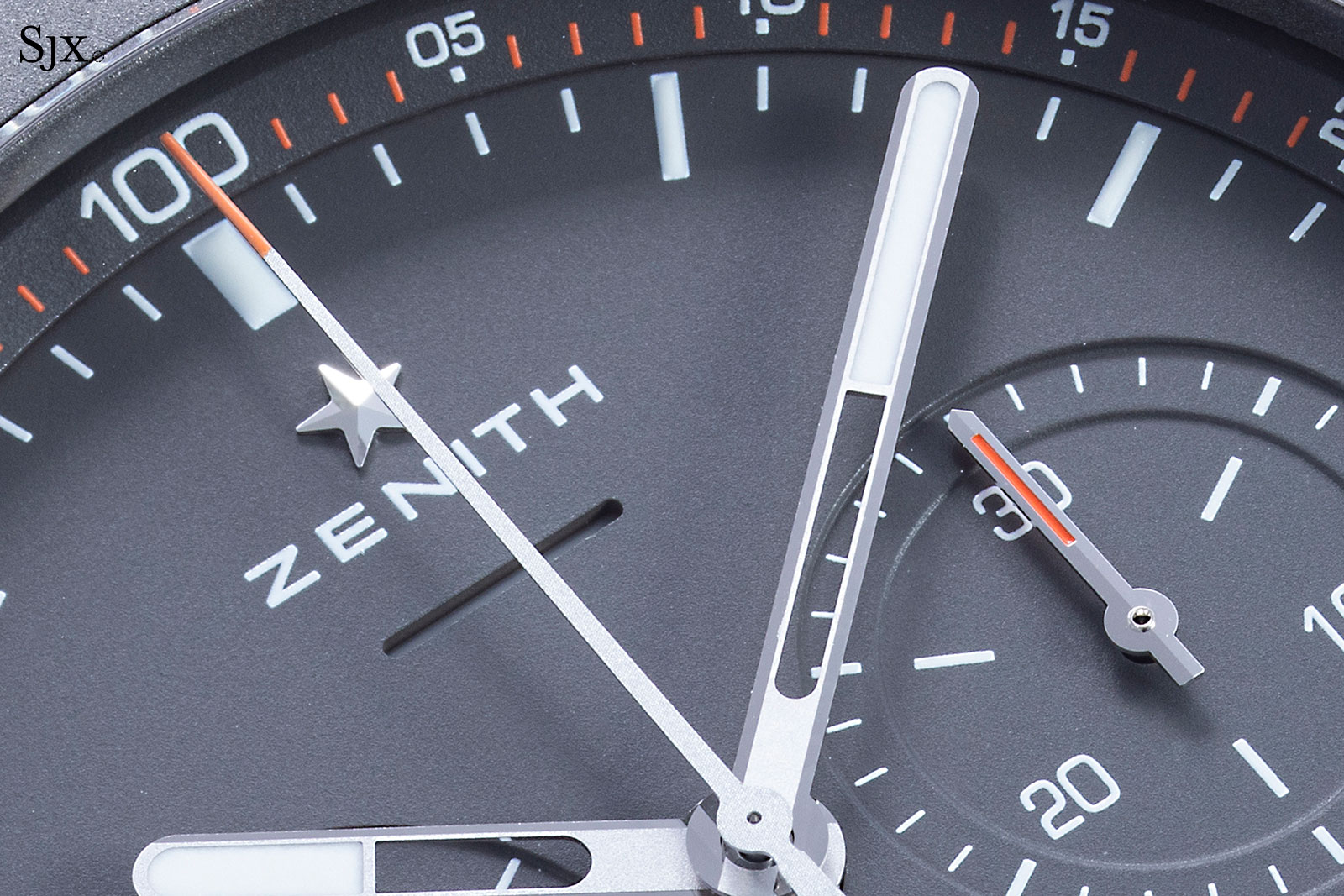 The watch pictured is a prototype, which is why some of the printing on the dial is slightly fuzzy 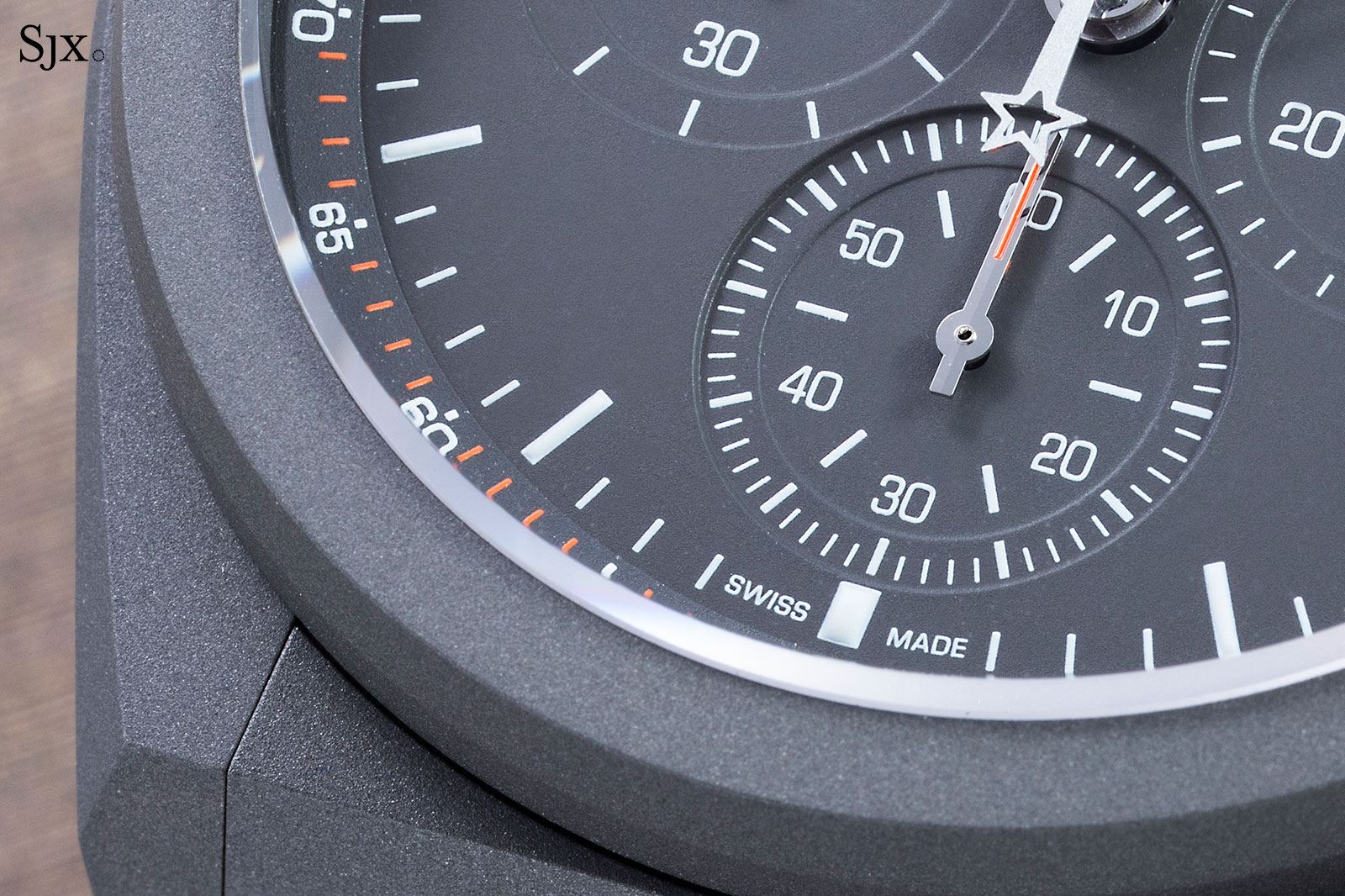 But the most reduced element of the dial is the power reserve, which has been minimised a narrow, horizontal window. The linear power reserve display is not a new idea, Panerai has made it something of a signature, but it is useful without getting in the way of the design. 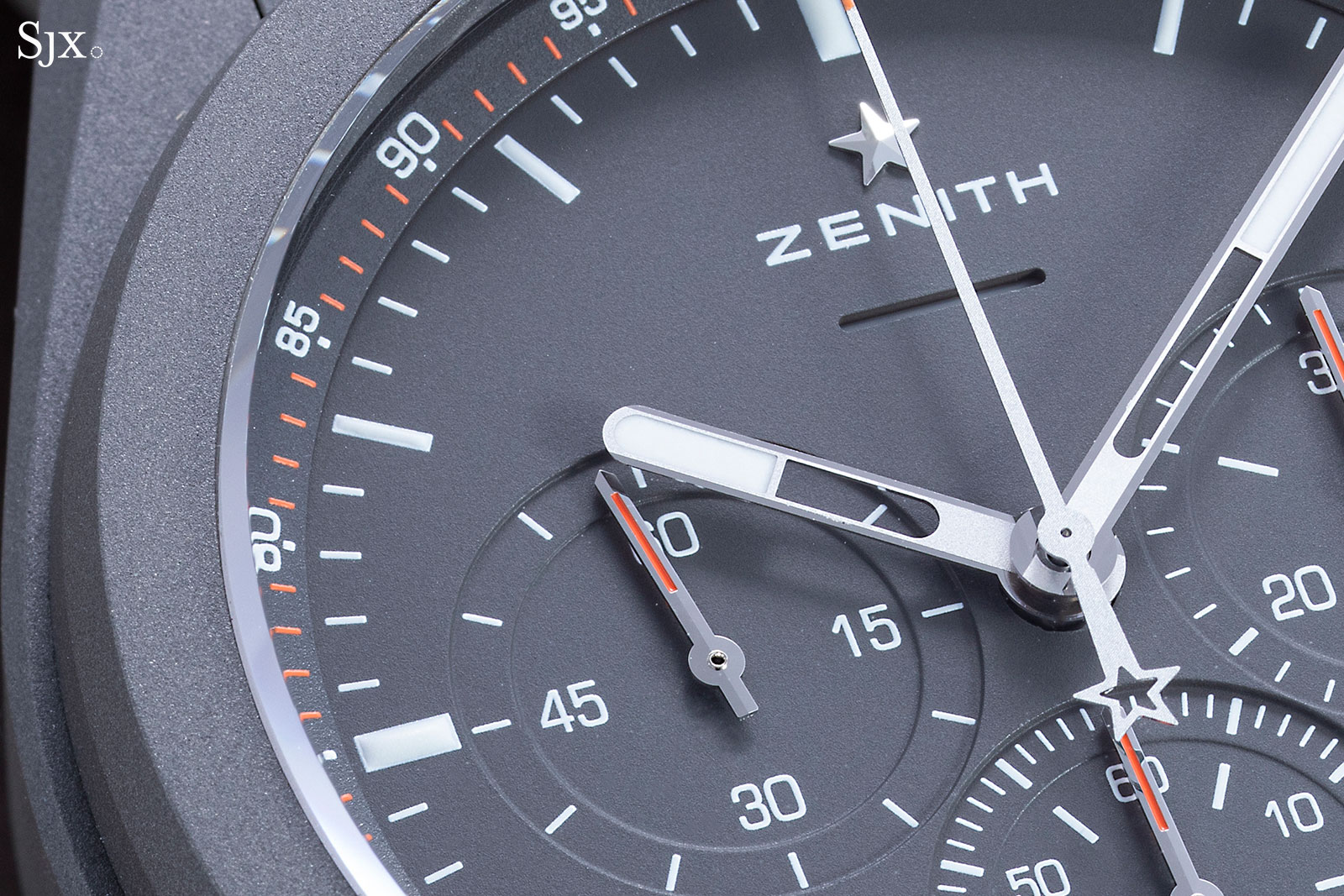 While the new Defy 21 avoids most of the usual frills found on automotive inspired watches – no hands shaped like brake callipers for instance – it does concede one detail. The rotor is shaped like the wheel rim of the Land Rover Defender, but it’s visible only from the back, making it discreet enough to be acceptable. And the rotor actually works well with the overall styling of the watch. The only downside of the rotor is that the spokes obscure the movement, leaving little of it visible. But while the movement is technically interesting, it is not particularly compelling visually in its non-skeletonised form, so not being able to see it isn’t too much of a loss. 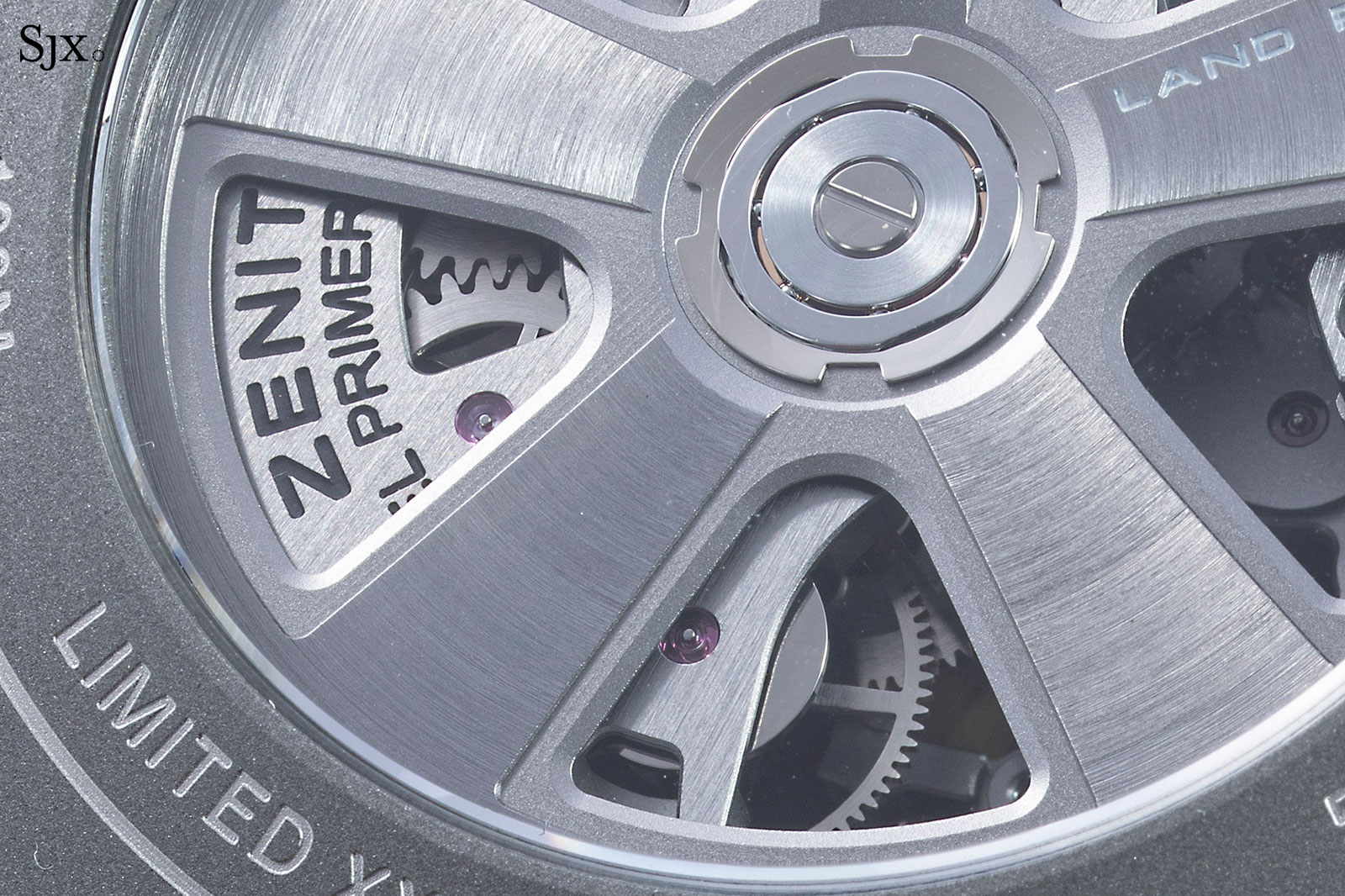 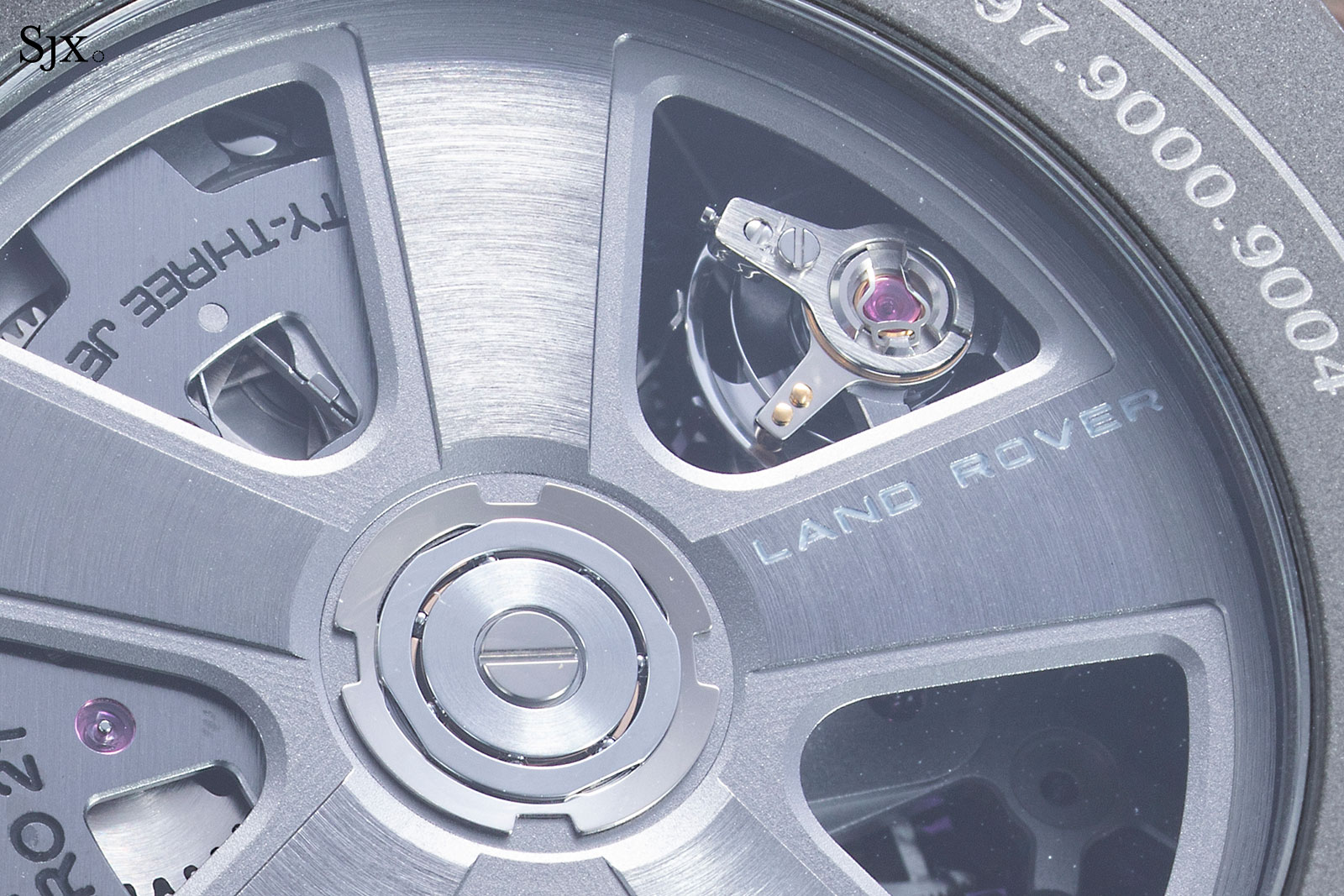 The El Primero 9004 inside is identical to that in the standard Defy 21. It relies on twin balance wheels and gear trains, one for the time and the other for the chronograph.

The balance wheel for the chronograph runs at 360,000 beats per hour, 10 times the frequency of the timekeeping balance wheel. As a result the chronograph is a true 1/100th of a second stopwatch, with the central seconds hand making one revolution around the dial every second. Although several years have passed since the introduction of the Defy 21, it remains the most affordable 1/100th of a second chronograph on the market.

The look and feel of the Defy 21 Land Rover works; it’s probably the best-looking iteration of the model to date.

And it is good value, though not quite as much of a bargain as the standard model. The Land Rover Edition is about 25% more expensive than the base model Defy 21, which is acceptable given the relatively small run of 250 pieces and styling.

Limited edition: 250 pieces
Availability: From April 2020 at both retailers and boutiques
Price: US$13,400

Correction January 17, 2019: The new Defy 21 is inspired by the Land Rover Defender, and not the Discovery as stated in an earlier version of the article.