Rexhep Rexhepi of Akrivia was the guest on our first-ever Instagram Live, where he spoke with our founder SJX. Lighthearted and insightful, the session centred on the growth of Akrivia’s in-house capabilities, as well as the future of the Chronomètre Contemporain series. Here’s a recap of the highlights from the session.

Rexhep has big dreams for Akrivia as a true manufacture, from production to even testing. This stems from an explicit desire to control every element of production, and to ensure his high standards at met every step of the way.

Much of the progress made in vertical integration will be reflected in the second series of the Chronomètre Contemporain. While the series one cases were produced by a Geneva specialist, the second series will have its cases made in-house by master case maker Jean-Pierre Hagmann, who joined Akrivia last year.

At the same time, Rexhep said the movement will have a greater share of parts made in-house. While the exactly proportion was unsaid, he made clear that his goal was to eventually make all key parts – bridges, base plates, wheels and pinions – in the Akrivia workshop. Beyond production timepieces, such vertical integration will be advantageous as it would allow Akrivia to prototype ideas far more quickly. 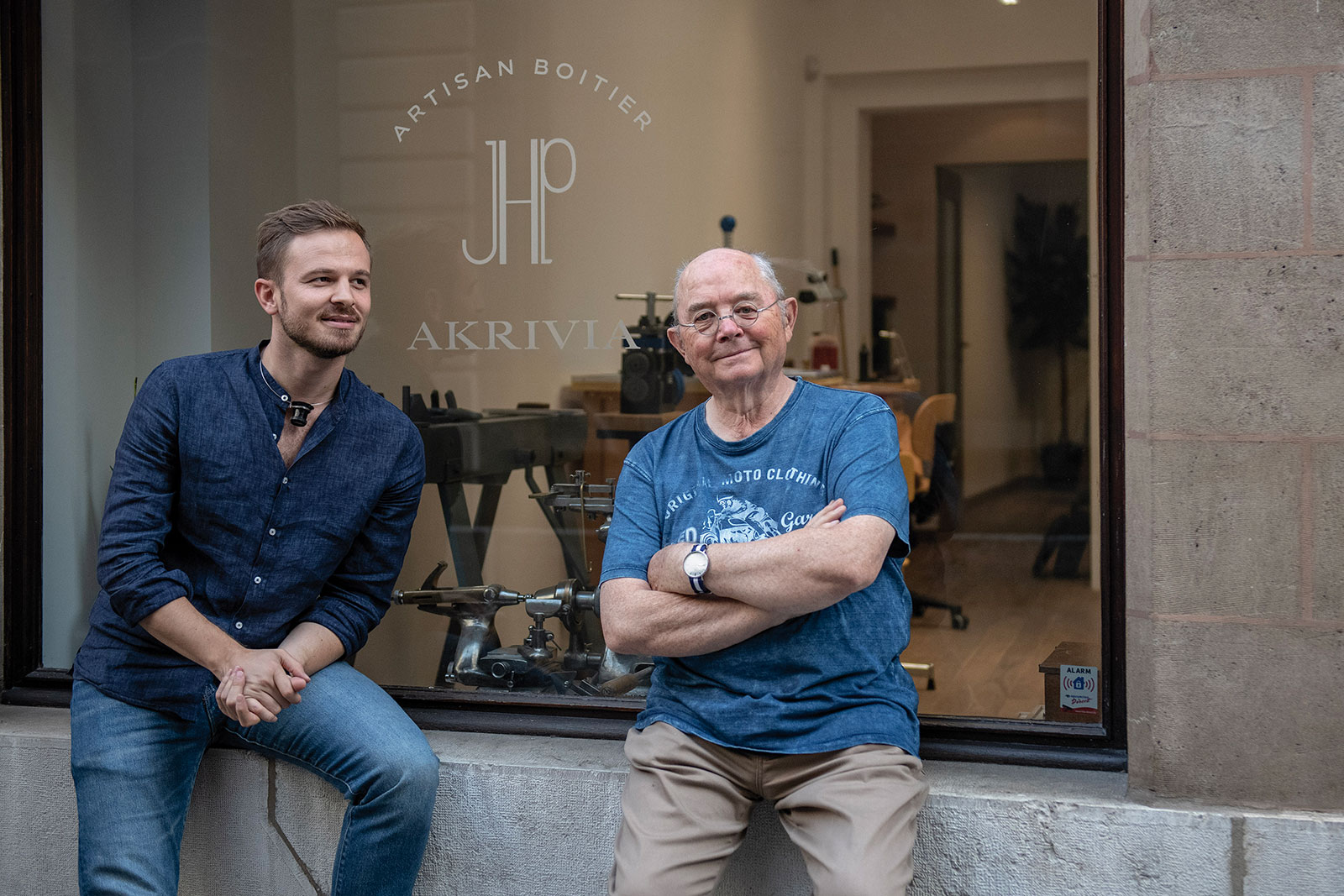 Interestingly, Rexhep also touched on chronometer testing and certification. The first series Chronomètre Contemporain is tested at the Besançon Observatory in France as standard.

Although Rexhep admits that having an independent body that sees thing from a different perspective testing the function of Akrivia watches is something he appreciates, Rexhep mentioned the possibility of one day conducting his own testing.

The Chronomètre Contemporain to come

The Chronomètre Contemporain was the watch that made Rexhep and Akrivia a star. And with Rexhep already having stated that it will be followed by a second model, many have been wondering how the watch will evolve. Almost everyone expected the second series to be based on the first, with a movement that is derived from the original.

But Rexhep made it clear that the second series is actually going to be powered by an entirely new calibre. As he explained it, he intended to add a complication to the first series movement, but the performance of the modified movement was unsatisfactory, so he chucked all of it and started from scratch. 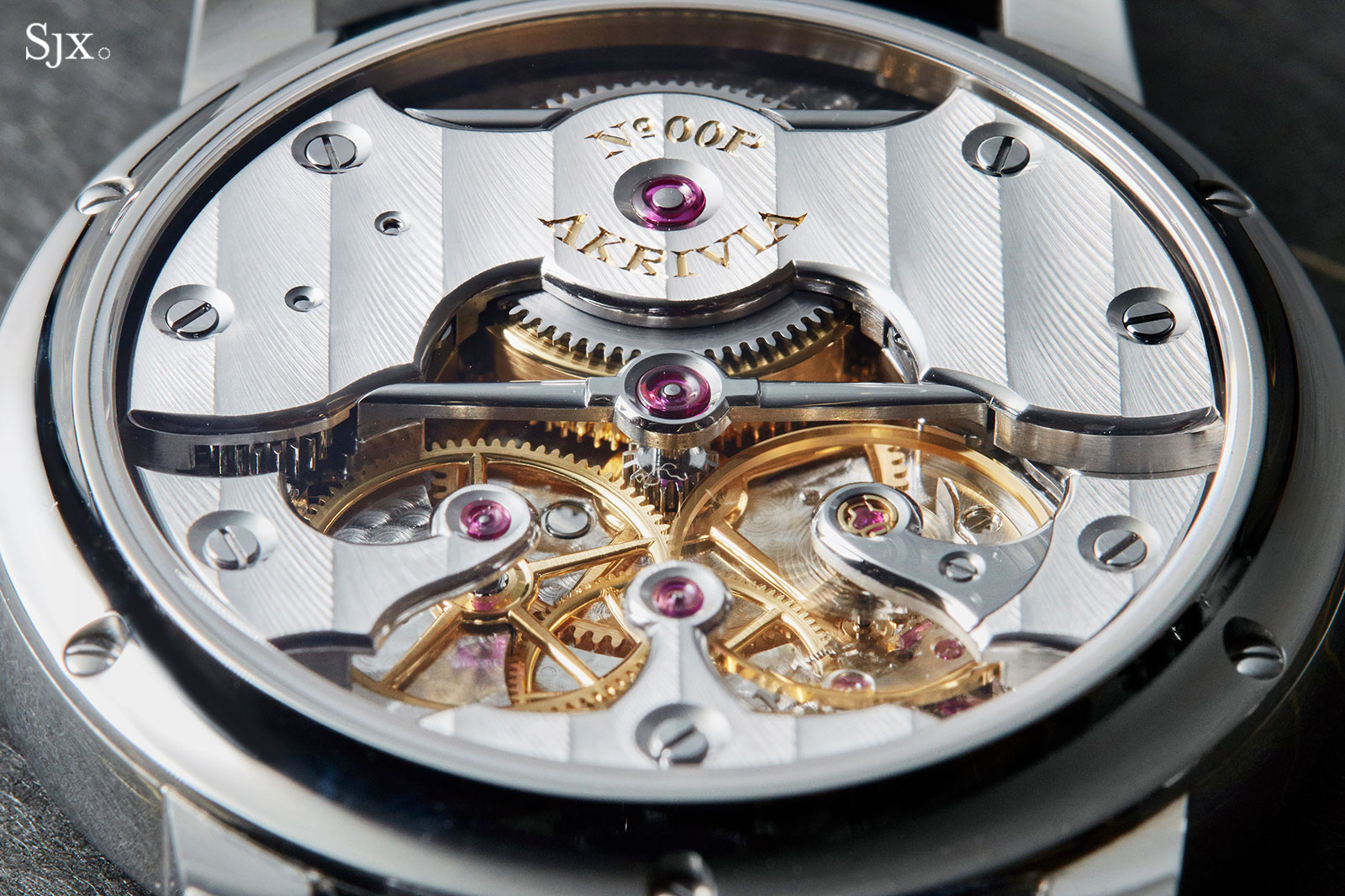 The cal. RR-01 inside the first series

So the second series movement is entirely different from the first, even having twin barrels instead of just one as the first did. In a sketch he showed during the chat, Rexhep pointed out the twin barrels – and most crucially, twin going trains.

Though he didn’t specify the added complication, one can speculate it is something fairly energy intensive – meaning a mechanism with frequent or recurring motion – since an additional barrel was needed. The new movement will, however, retain the symmetrical look that is characteristic of Akrivia movements.

Because the movement is wholly new and more complicated, Rexhep did let on the second series will be priced higher than the first, though he stated it would still be reasonably priced for what it is, as many aficionados regard the first series to be. Rexhep hopes to be able to unveil the second series in early 2021.

Rexhep also touched on the AK series, the Akrivia collection with a more contemporary design.

While the hand-hammered finish has become something of an Akrivia trademark, Rexhep also mentioned he was working on new decorative techniques for dials, perhaps destined for the AK series.

He also noted a redesigned AK series case is in the works, though it will have a similar aesthetic language as the current series. 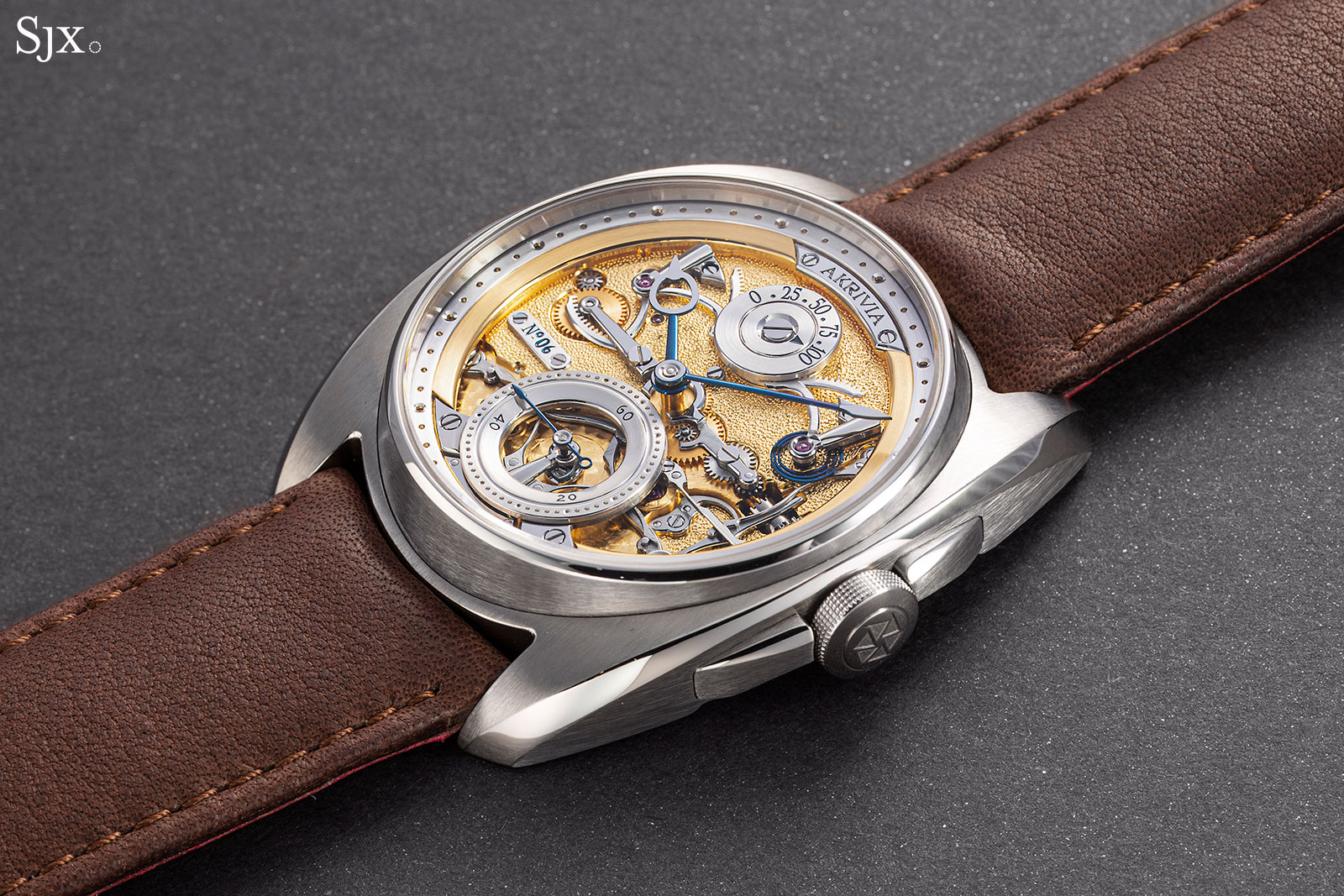 Before the Instagram Live session, readers submitted questions for Rexhep, and he answered many of them.

When asked if Akrivia will ever make a line of entry-level watches, Rexhep’s response was a resounding no. It will not happen because he desired for a high-quality watch makes that impossible. 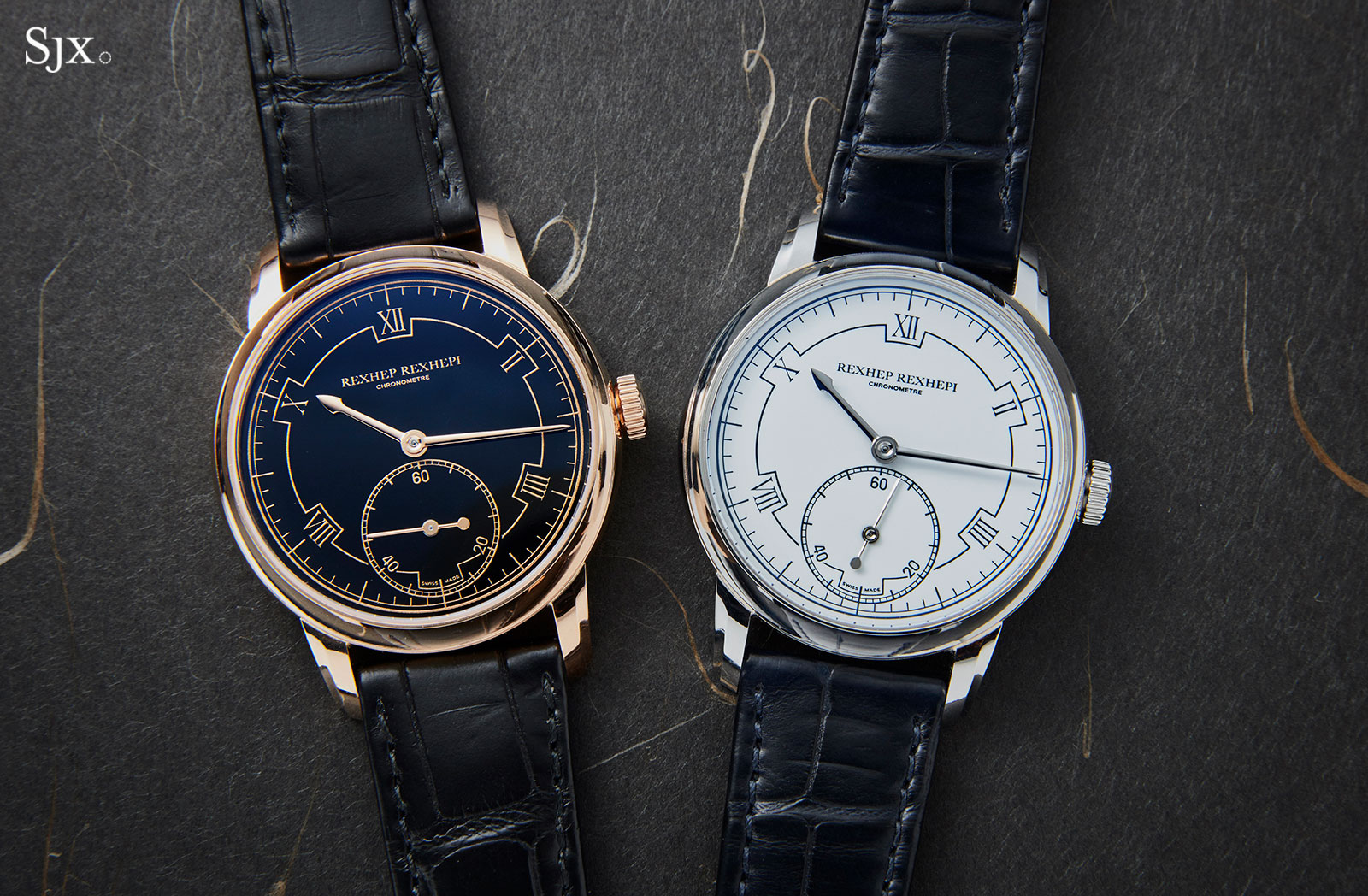 Rexhep was asked to list a few independent watch brands that he respects and finds interesting. Rexhep singled out Philippe Dufour, Voutilainen, De Bethune, and F.P. Journe (where he had worked for a few years before starting Akrivia). He loves that each of these brand has its own aesthetic and technical aspects that can be appreciated and learnt from.

More notably, he declared that the ultimate goal for Akrivia is to one day be as innovative as F.P. Journe, but boasting movement decorations like Philippe Dufour. 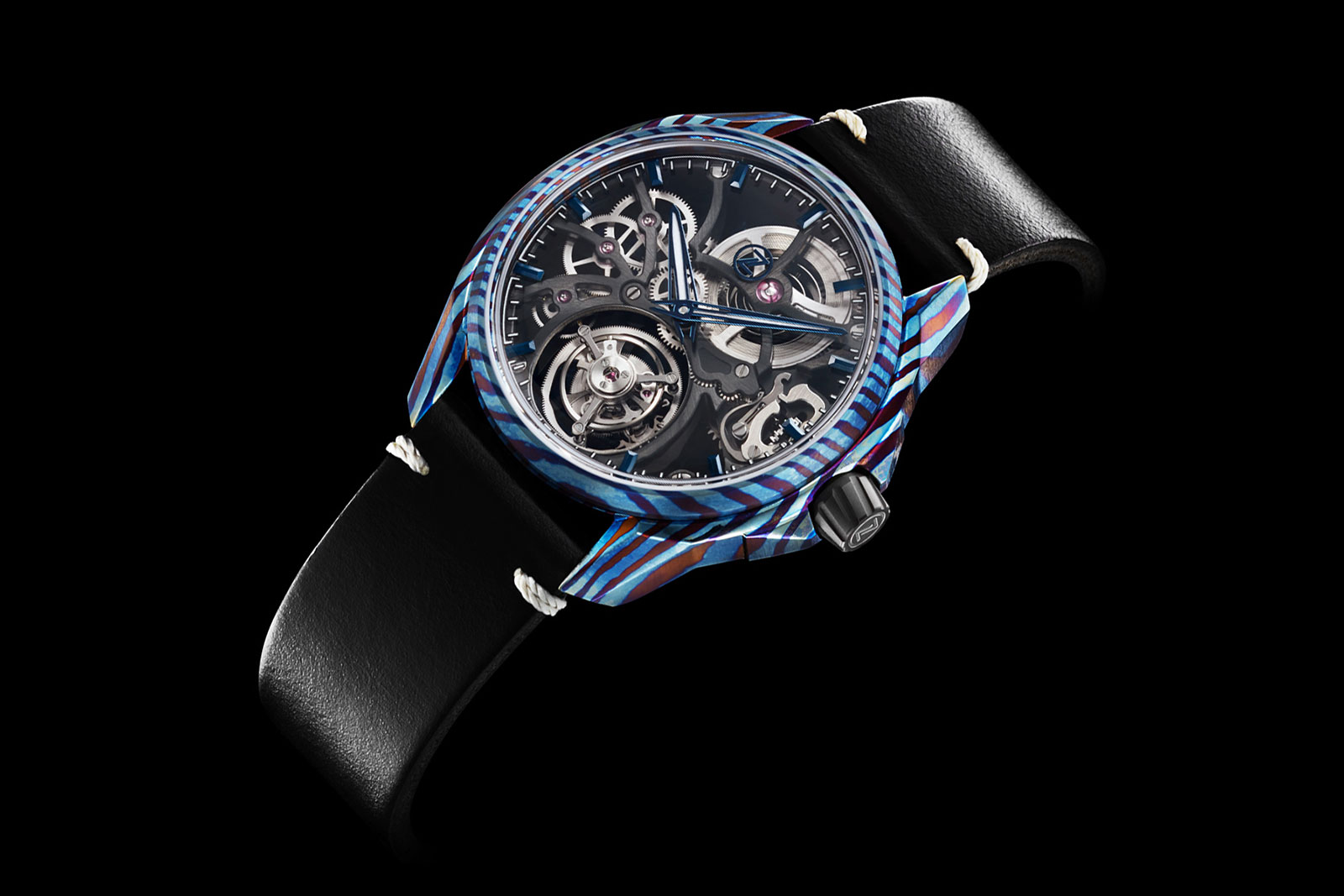 A Singapore-based “micro brand”, Zelos Watches has found success with affordable sports watches, mostly priced at about US$1,000 or less, but often incorporating unusual materials such as carbon fibre or meteorite.

But in a significant departure from its usual fare, Zelos has just unveiled the Mirage, a flying tourbillon powered by a calibre made by a noted Swiss movement maker La Joux-Perret. With the case options including Timascus and mokume-gane, which are pattern-welded titanium and bronze respectively, the Mirage certainly sticks to the brand’s design ethos of exotic materials.

While it’s not surprising that the Mirage is substantially more expensive than Zelos’ past models, it is still good value for a watch featuring both a respectable tourbillon movement and an exotic-metal case. The case is sleek and modern, machined to create sharp, wide facets that give it an aggressive stance and complement the contemporary look of the movement.

Of the three case materials on offer, the Timascus versions are the most intriguing. Typically found in high-end custom knives, Timascus is being used in a watch for the first time according to Zelos.

In terms of complications, the Mirage is a radical departure from the brand’s previous offerings. Powered by a skeletonised flying tourbillon movement from La Joux-Perret, the Mirage enters the realm of technical horology. The movement is hand-wound, with its bridges and base plate coated black and finished with circular graining on top.

Like the similarly affordable Horage tourbillon that’s equipped with the same base movement, the calibre in the Mirage has a gear train designed to sit alongside the tourbillon cage rather than below, as is convention. The construction allows the watch to be a surprisingly slim 9.5 mm, excluding the crystal, and also provides a better view of the tourbillon from front and back.

A transparent sapphire dial shows off the depth and details of the skeletonised movement – with the tourbillon sitting in an aperture in the sapphire dial – while also creating the illusion of floating hands indices and hour markers, explaining the “mirage” moniker. The 41 mm case is available in titanium, Timascus and mokume-game – with each having hands and hour markers in the same colour as the case.

The most conventional of the trio is titanium, which is rendered in its natural grey, monochromatic state. Though titanium is common in watches generally, the minority of the Mirage run will be in the metal, only two of the ten in titanium.

Timascus, on the other hand, is pattern-welded titanium. Essentially a stronger titanium alloy, timascus is produced by welded various piece of titanium alloys together, then folding and forging the billet – a process repeated multiple times to create an metal with an attractive wood-grain surface. The specific Timascus alloy used for the Mirage is offered in blue or yellow. 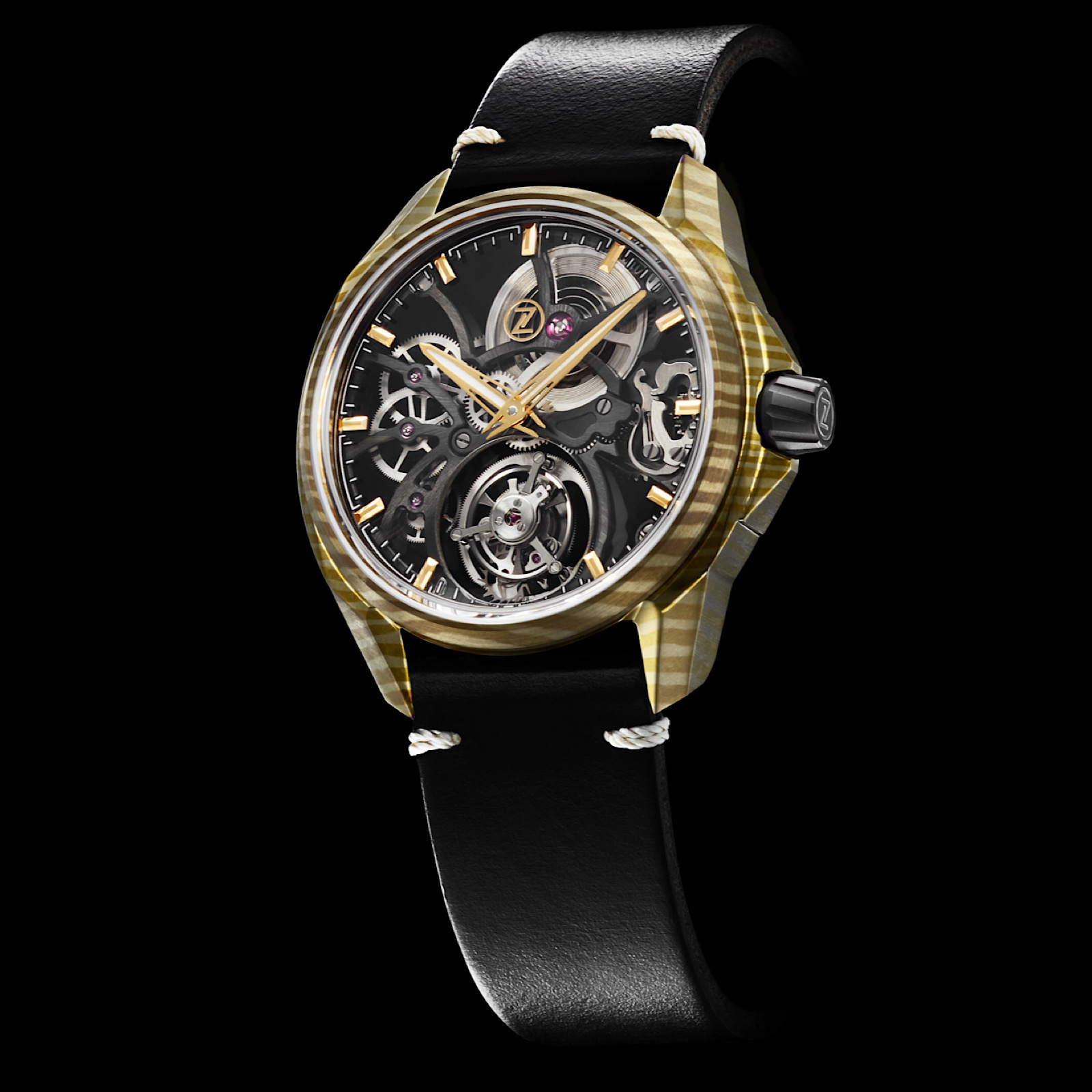 Last is mokume-gane, a traditional Japanese metalworking technique that translates as “wood grain metal”. It’s essentially pattern-welded brass, and like Timascus, creating the alloy requires pressing or welding, and then folding, billets of different metal to create the striated surface.

The use of copper and nickel silver for the Mirage case results in a brown and silver wood-grain pattern, but the copper will acquire a patina over time, enhancing the contrast between the layers. 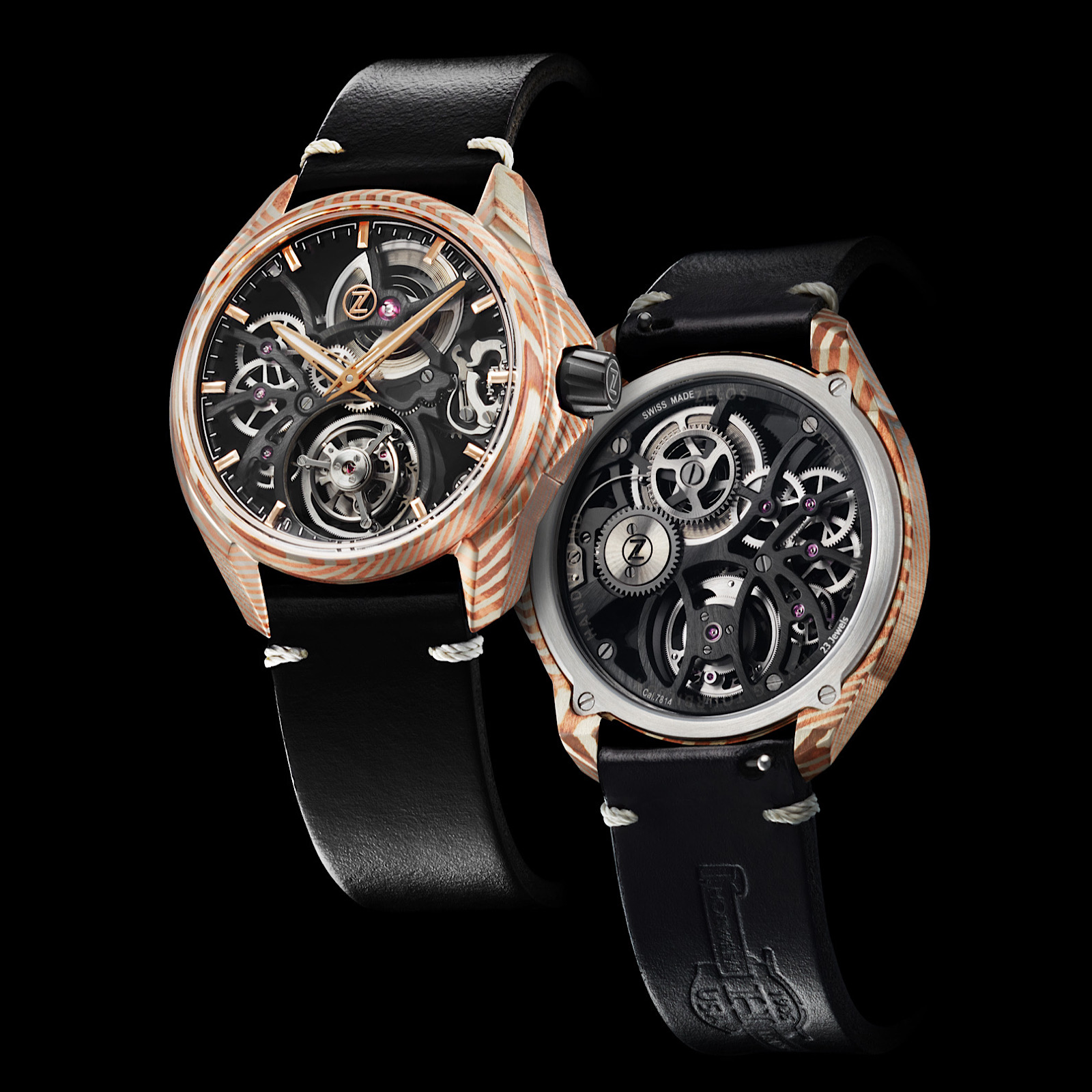 Mokume-gane of copper and nickel silver

French for “spangled”, a reference to the tiny decorative pieces of gold foil that make up the pattern, paillonné enamelling has been a specialty of Jaquet Droz since its modern-day revival, starting with the very first Grande Seconde Paillonnée of 2004 that had a dial made by enamel artisan Anita Porchet. Jaquet Droz has since mastered the fine art of paillonné enamelling, with recent editions like the Paillonnée Enamel “Gold Arabesques” featuring dials made in its own workshops.

The new pair of paillonné enamel watches do not fail to impress with their vivid colours and patterns – gold paillons against translucent blue enamel over guilloché makes for a dynamic combination that immediately catches the eye. And up close, which is the best way to appreciate the enamelling, the gold paillons are tiny yet intricate and nuanced. 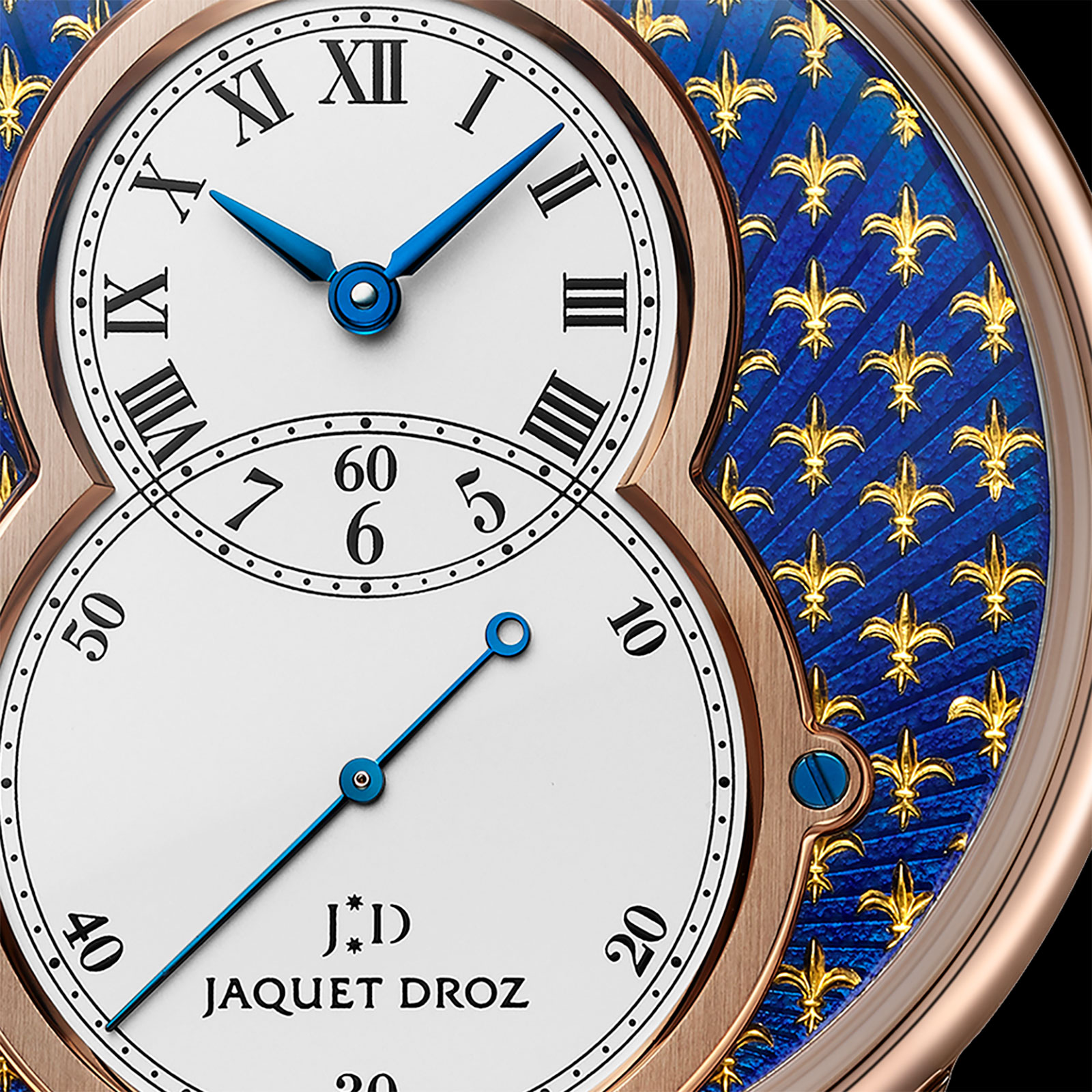 Out of the two, I gravitate towards the Fleur de Vie due to its 35 mm case, which is fitting for a dress watch, especially compared to the significantly-larger 43 mm Fleur de Lys. I also love that the mother of pearl sub-dial as it adds an extra layer of complexity to the dial. The diamonds on the case and mother of pearl make it a ladies’ watch, but remove those and it would be a formal watch for men.

However, the blue strap creates too much blue in the watch, distracting from the dial. A black alligator strap would do better in emphasising the striking dial, which is the very combination found on the original series of paillonné enamel watches.

Paillonné enamel is an esoteric craft even within the rarefied domains of enamelling. Individual paillons – dainty shapes cut from a thin gold leaf – are positioned by hand to form a repeating motif on a base already covered in fired, translucent enamel. The paillon pattern is then covered in further layers of enamel, and finally fired and polished.

For the dials of the Jaquet Droz watches, the base is a solid gold disc with radial guilloche. And unlike the first-generation paillonné enamel that uses antique, 19th century paillons, Jaquet Droz now produces its own paillons, allowing it to create a myriad range of paillonné patterns.

Consequently, both watches feature different paillons. The Grande Seconde Paillonnée is decorated with a repeating fleur-de-lis motif, while the Petite Heure Minute Paillonnée dial is covered in a pattern created by overlapping circles sometimes known as fleur de vie.

Both watches are powered by variants of the same calibre that was originally the double-barrel Frederic Piguet 1150, but now upgraded in various ways, including a silicon hairspring and pallet lever.