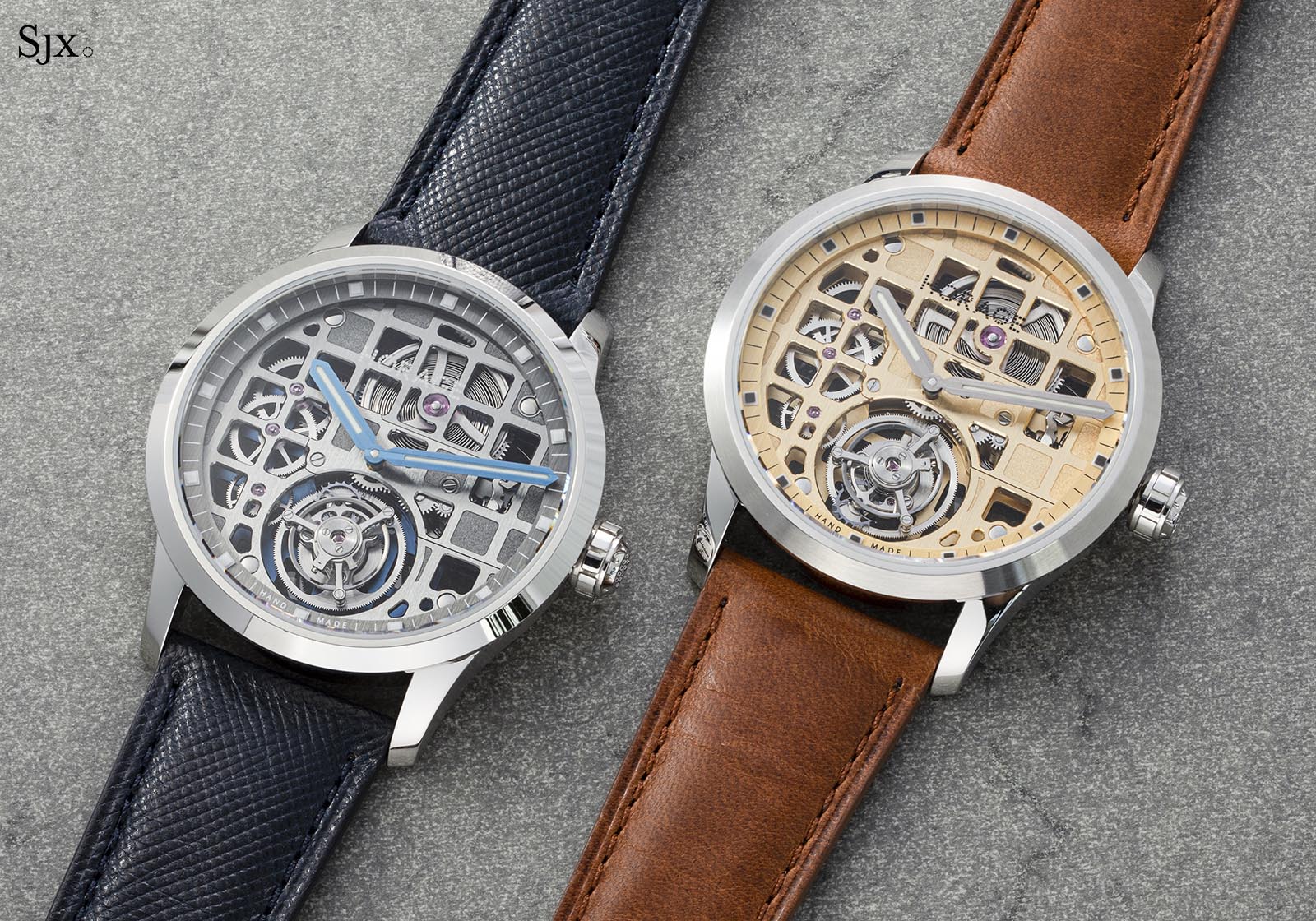 Beginning in the early 2000s, tourbillon wristwatches started to become more affordable as watch brands like Jaeger-LeCoultre and movement makers like Swiss Time Technology (STT) debuted aggressively-priced watches and movements. Notably, none of these products left a lasting impact; nearly all have faded away.

More recently, the 2016 launch of the TAG Heuer Carrera Heuer-02T tourbillon chronograph for just under US$16,000, continued the trend – a sharp increase in the affordability of the tourbillon but also a downward spiral in its desirability.

Bucking the trend is the Tourbillon 1 from Biel-based watch brand Horage. Perhaps the most interesting and impressive affordable tourbillon to date, the Tourbillon 1 manages to be surprisingly low cost while being notably good, in design and execution. Now the most affordable Swiss-made tourbillon on the market – by a large margin since it retails for only 6,990 Swiss francs – the Tourbillon 1 is a slim, hand-wound wristwatch equipped with skeleton movement that has flying tourbillon and a silicon escapement.

More impressive than the price is the smart design of the movement. From the motion works to the gear train and the tourbillon, it was conceived to have a slim profile while offering a clear view of the tourbillon from both the front and back. 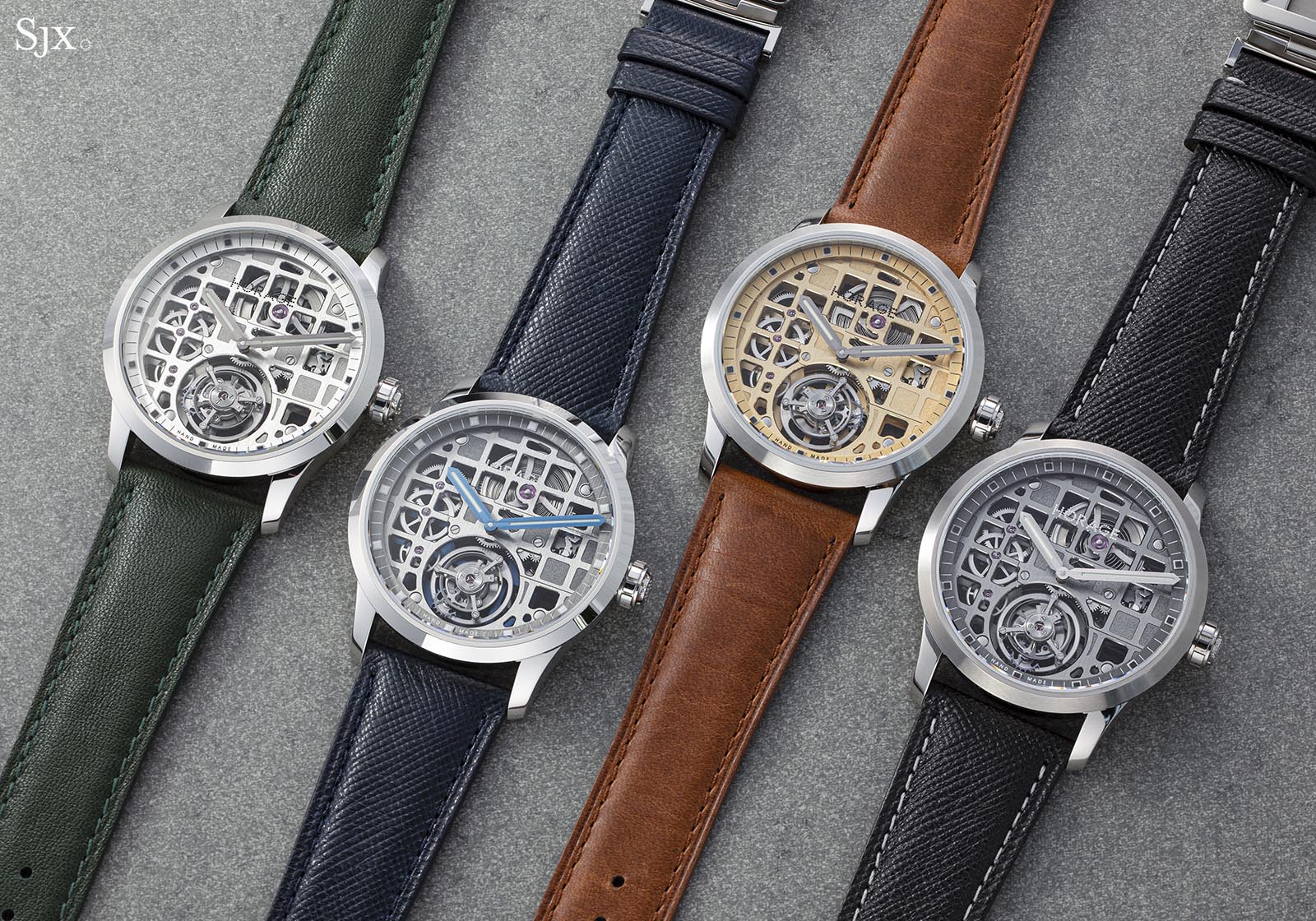 The Tourbillon 1 in its myriad dial options 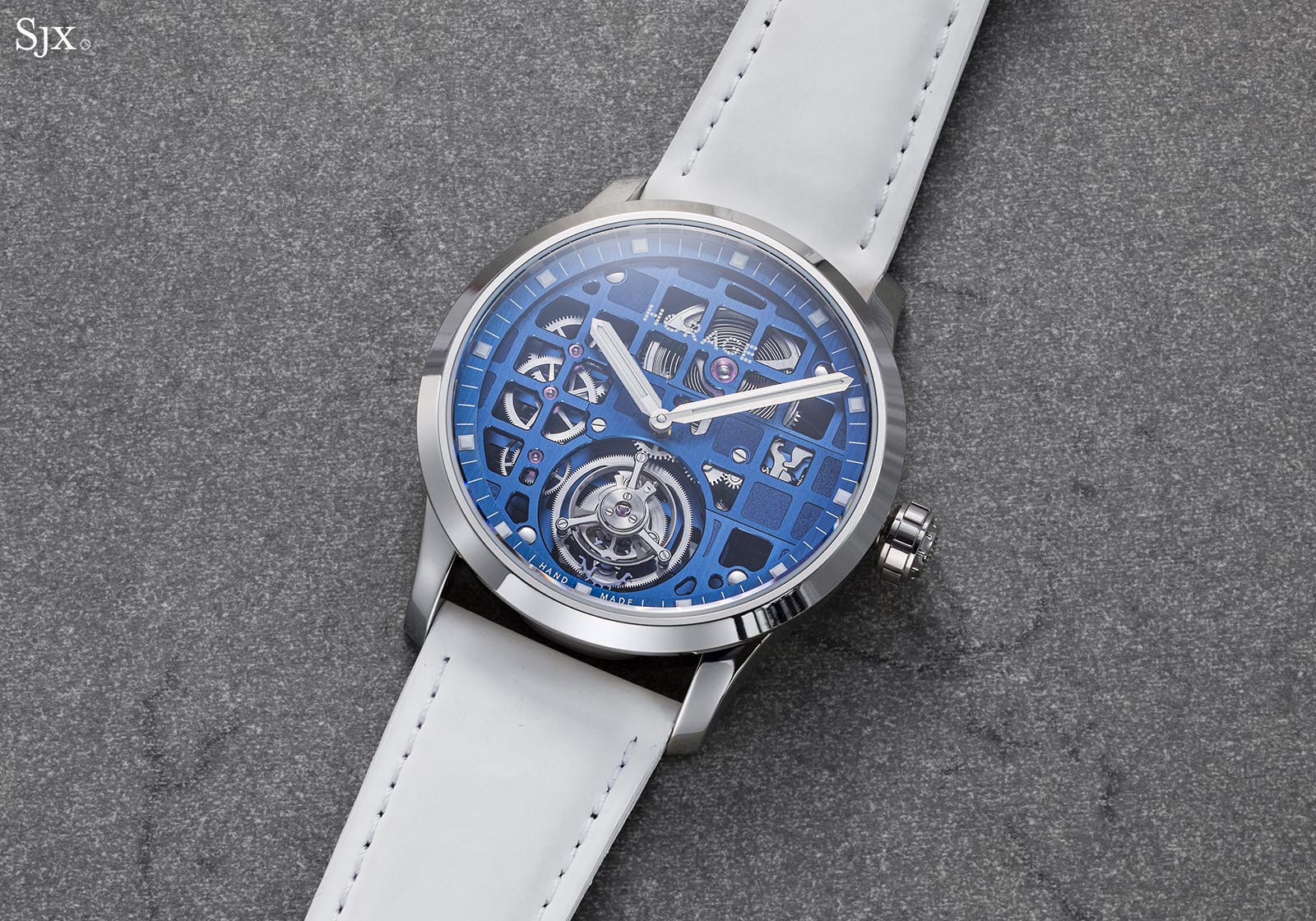 Also in a striking blue that costs a little bit more

As a result of the slim movement, the case of the watch clocks in at just 9.95 mm high excluding the crystal. It measures 39 mm wide at its base and 41 mm at the round of the bezel.

As a result, it wears smaller than expected and offers a substantial wrist presence. It has a simple, fuss-free finish that doesn’t detract from the visual complexity of the dial. The bezel and top surfaces of the lugs are polished while the case band is brushed. 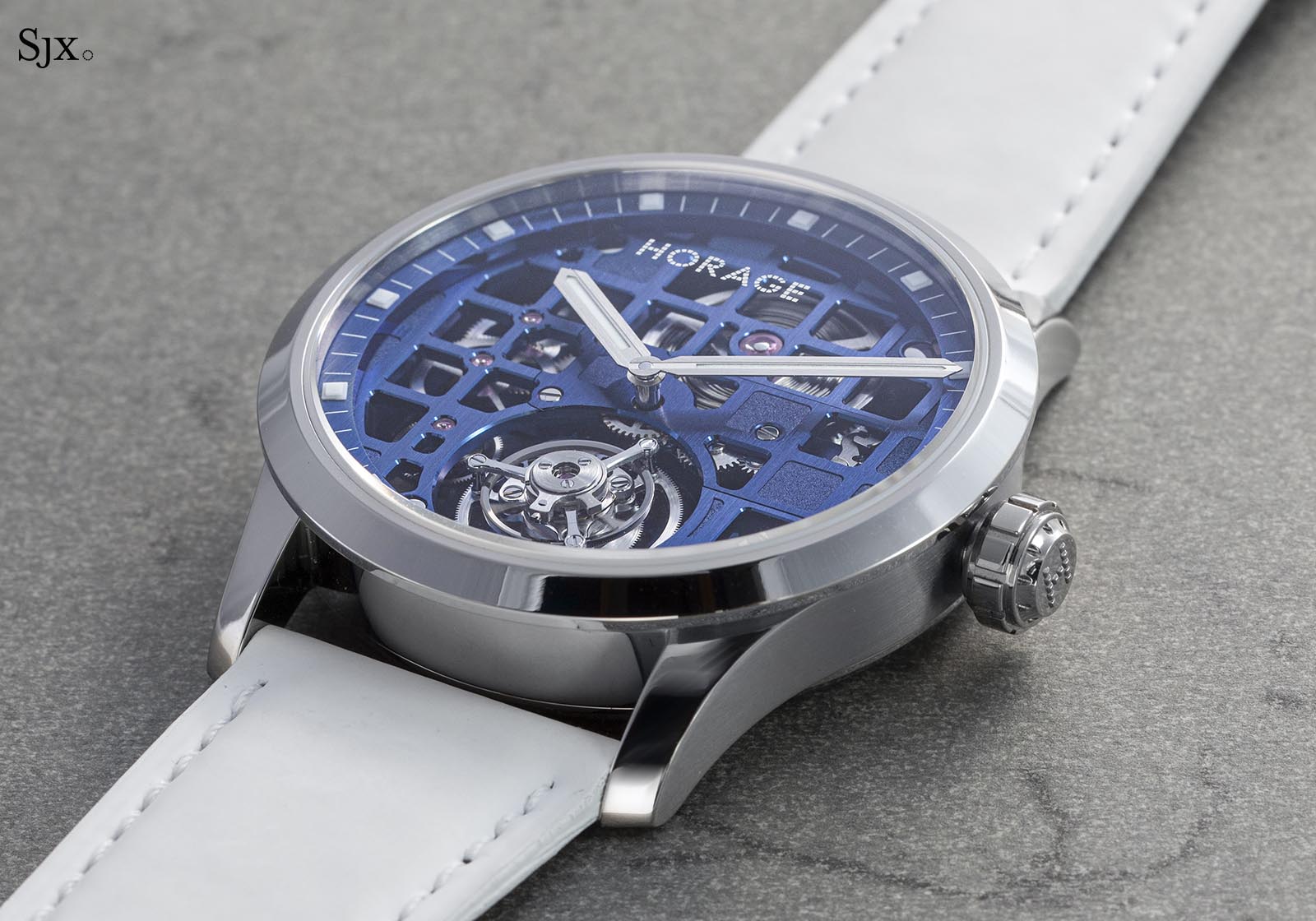 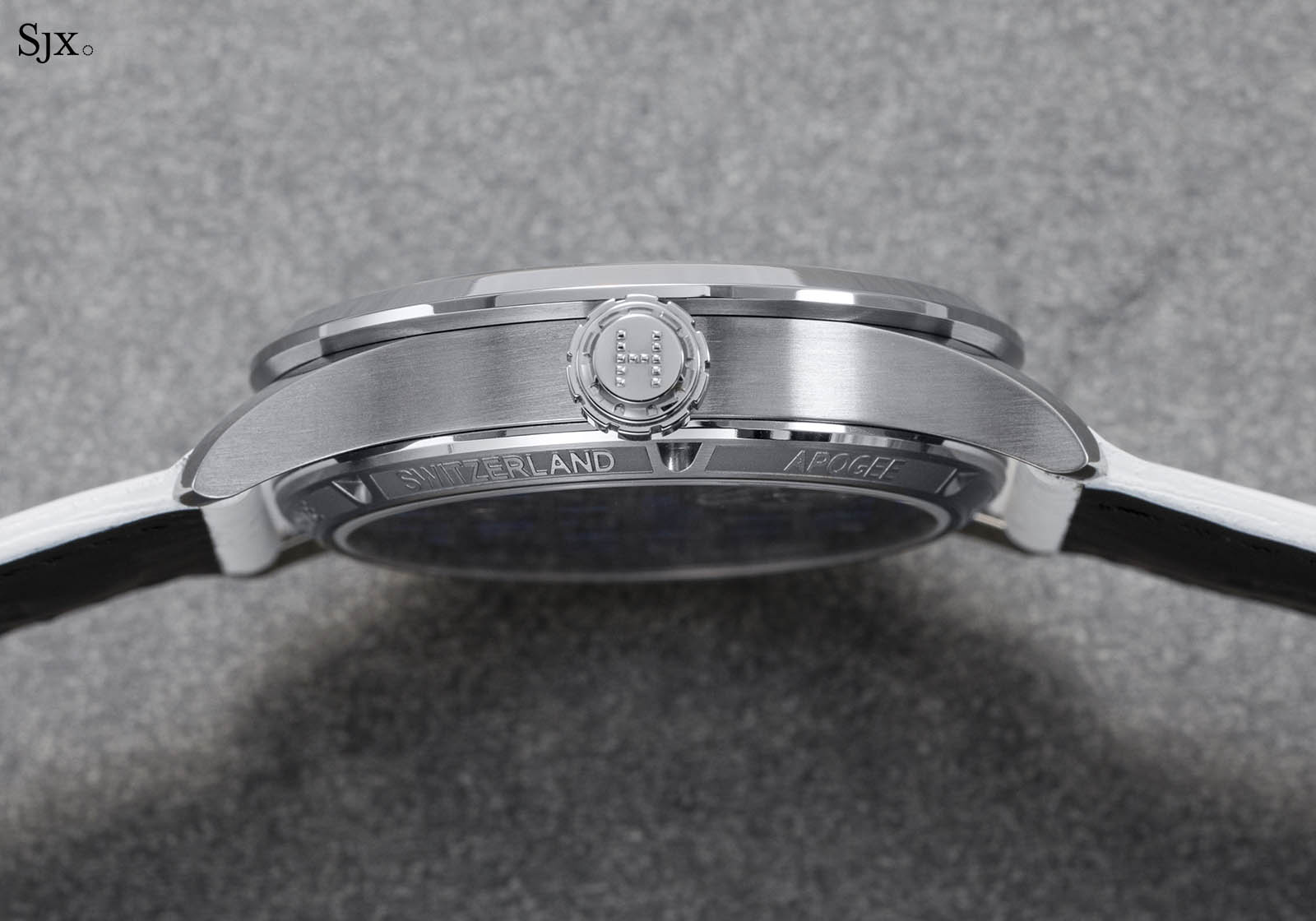 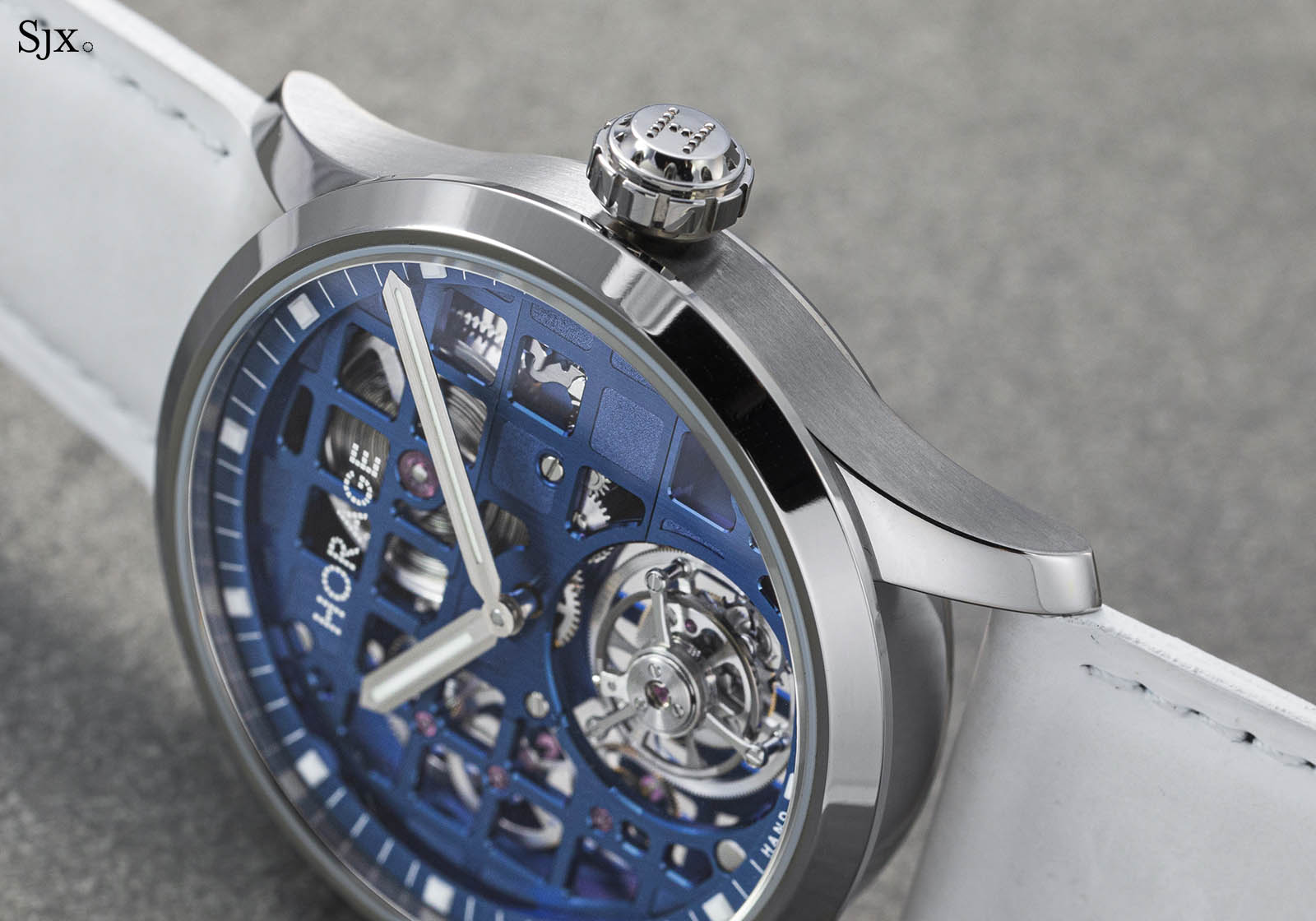 Horage was founded in 2009 by entrepreneur Andi Felsl and his wife Tzuyu Huang, a couple long involved in the watch industry. Ms Huang was formerly the chief executive of watch component supplier Momo Plus.

The couple also co-founded movement maker THE+, along with German watch brand Teyos. THE+ was responsible for constructing and designing the tourbillon movement, while some parts were supplied by La Joux-Perret, the movement maker owned by Citizen.

THE+ got its start with simpler movements, with the first being the K1 full-rotor automatic launched in 2015. Developed as a practical and cost-efficient calibre for Horage, the K1 was designed by a three-man team. The trio was made up of Florian Serex, the chief executive of Arnold & Son who spent a good part of his career at ETA and ValFleurier; and two former engineers from Eterna who helped developed the the versatile and robust Eterna Caliber 39 – Jonas Nydegger, who now leads THE+, and Stephan Kussmaul, currently at ETA. 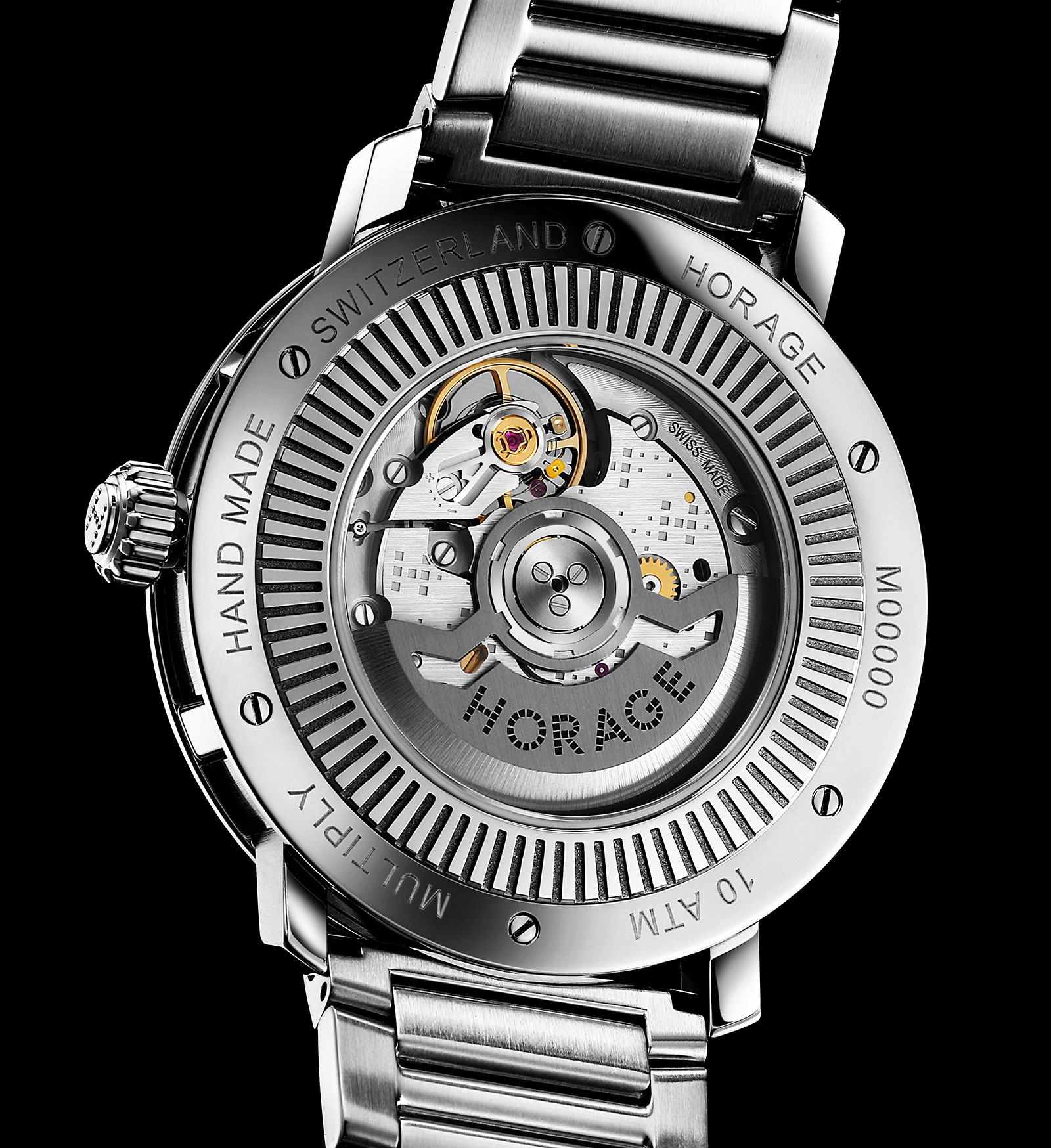 The K1 movement in the Horage Multiply. Photo – Horage

The K1 was equipped with a silicon escapement and, like the Caliber 39, was designed with modularity in mind – allowing for the integration of complications without increasing its height. THE+ is currently developing the K2, an automatic with a micro-rotor, with the K-TOU tourbillon movement making its debut this year. At a glance, especially from the back, the K-TOU movement appears vaguely familiar, and for good reason. The movement borrows its layout from the Angelus A300 movement made by La Joux-Perret for its sister brand Angelus. Being a specialist at modifying the Valjoux 7750, La Joux-Perret, formerly Jaquet, utilised the robust gear train of the 7750 in this tourbillon movement. While the two movements are visually similar, they are also substantially different – the K-TOU has a longer power reserve than the A300, for instance.

Other components, namely the larger ones such as the main plate and bridges, were designed by THE+ AG but produced and finished by La Joux-Perret. Horage puts everything together in-house.

Visually, the Tourbillon 1 does not immediately look like a skeletonised watch, because of the open-worked chequerboard grid – modelled on the Horage logo -​ on the front and back, but it is. The mainspring inside the open barrel is visible from the front, allowing the state of wind to be approximated from the coils of the spring. 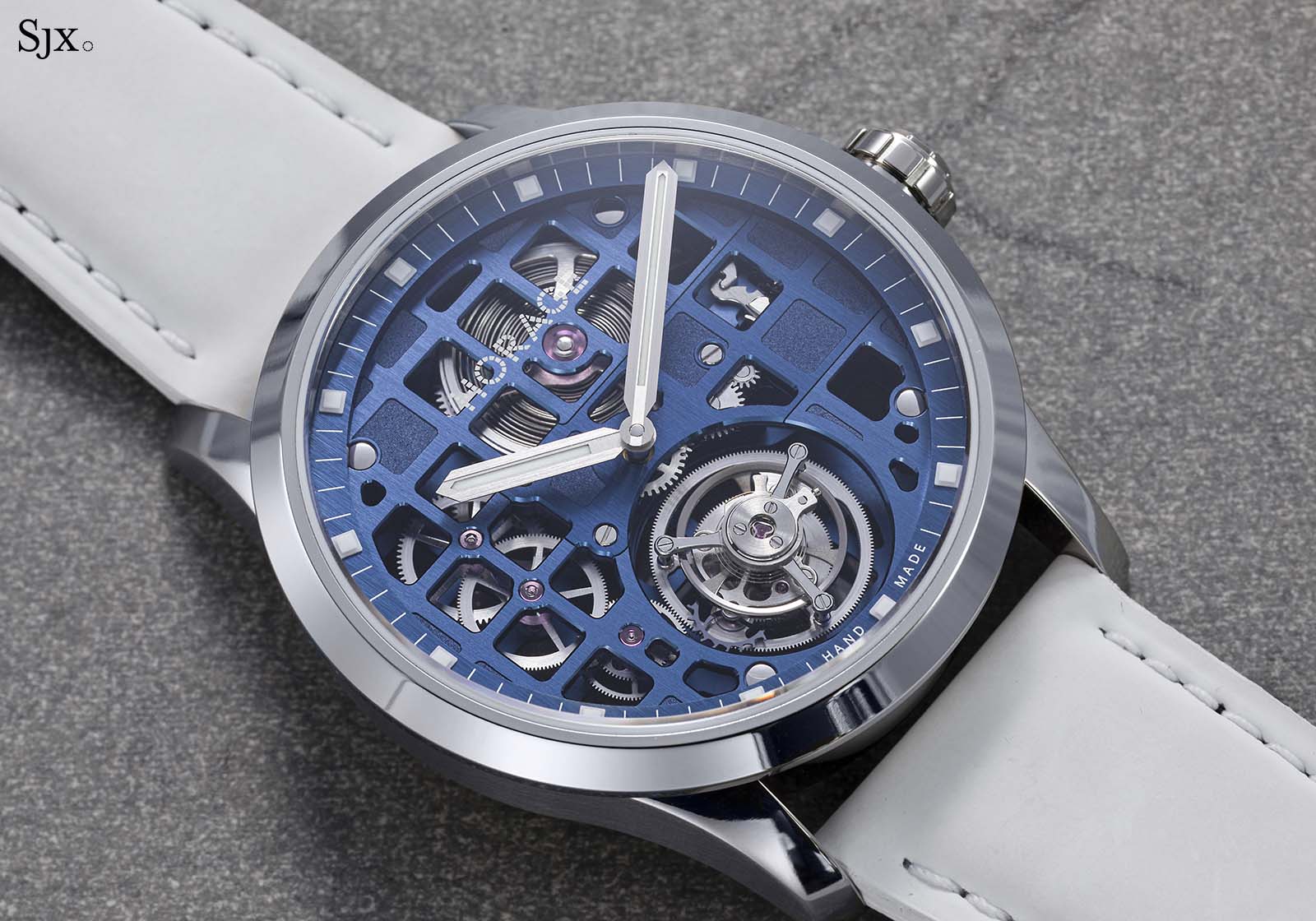 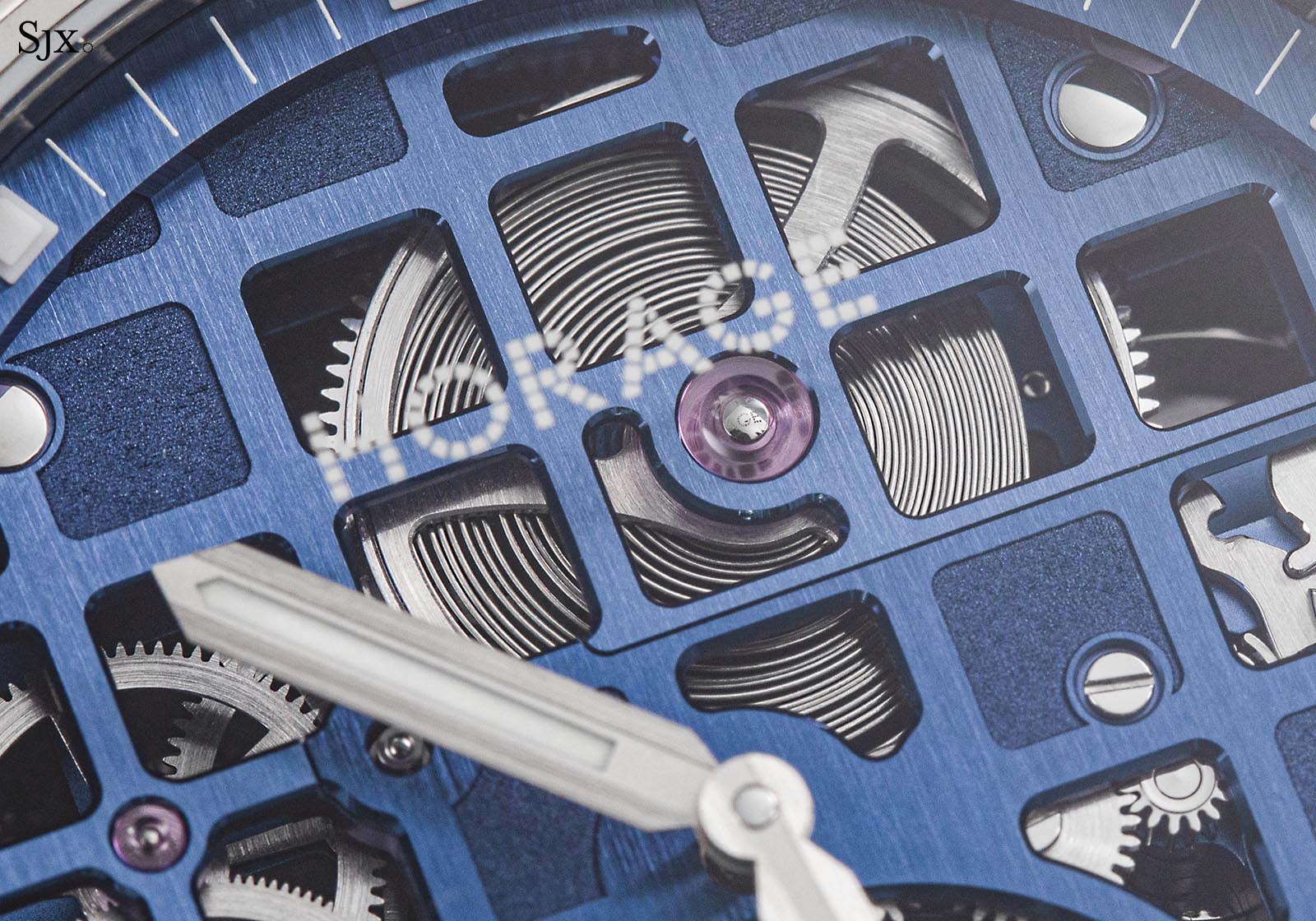 Designed by a watchmaker at THE+, the main plate and bridges of the movement are inspired by the Horage logo, a tiled mosaic spelling out its name. Both the base plate and bridges designed with strategically positioned apertures in the grid, in order to exhibit the entire transmission system, starting from the skeletonised barrel to the flying tourbillon and silicon escapement.

The large tourbillon cage has a relatively small balance wheel, allowing it to operate at a relatively high frequency of 4 Hz, or 28,800 beats per hour.

The movement has a going train powering the tourbillon along the left side of the movement, utilising all the space in the movement to reduce thickness. Meanwhile, the motion works for the hands are driven separately by the barrel, with the gears being made small so as to not obstruct the view of the tourbillon cage. 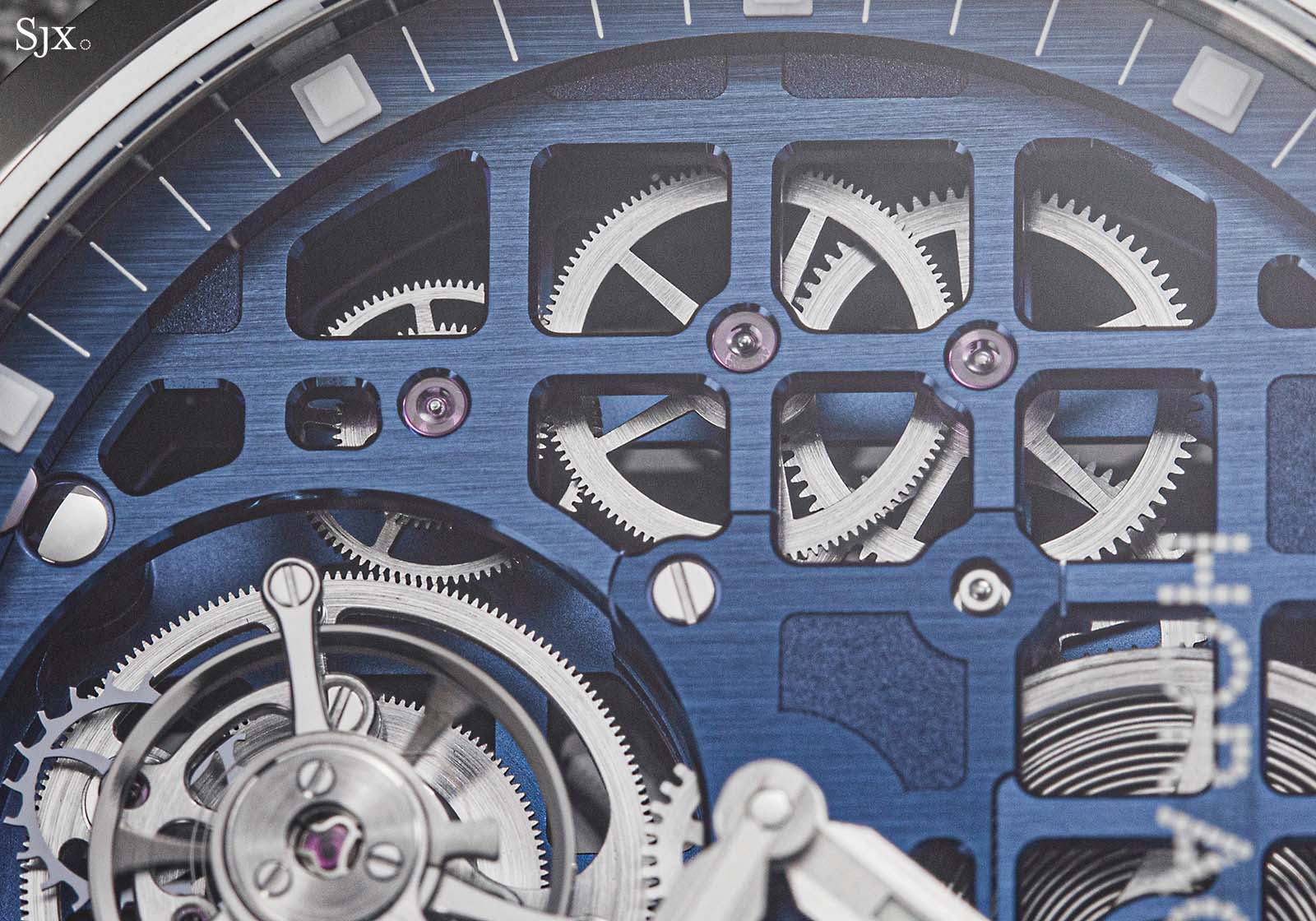 And another perspective from the back

And because the tourbillon is driven by a gear train on its periphery rather than the conventional pinion beneath the cage, it offers a clear and airy view of the tourbillon cage. These subtleties, along with the flying tourbillon anchored only on the bottom, result in a movement that measures just under 10 mm high. 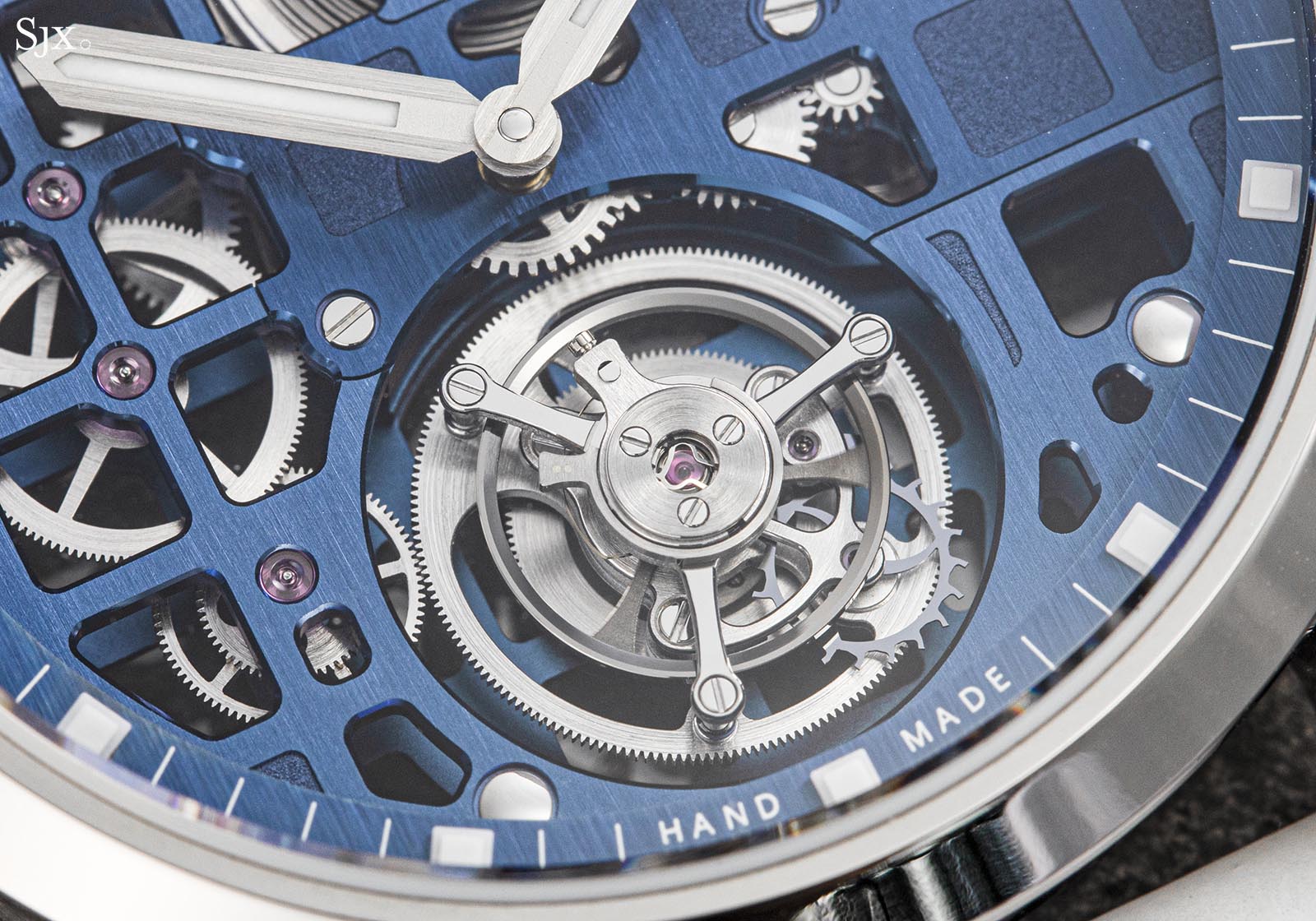 The cage is driven by a wheel on its left edge, rather than at the back as is convention The jewelled bearing for the bottom pivot of the tourbillon

For its developers, chronometric performance and reliability are as important as its aesthetics. Consequently, the tourbillon is fitted with an escapement made entirely in silicon.

The physical properties of silicon, such as its low-density, the ability to be fabricated precisely, as well as a perfect surface state, allows the material to operate with little energy and lubrication. As a result, the movement has a power reserve of 72 hours as opposed to the 60 hours of the Angelus A300 that shares the same gear train.

Both the escape wheel and pallet fork are made by Sigatec, a micro-component producer founded by Ulysse Nardin and Mimotec that specialises in both DRIE and LIGA technologies. 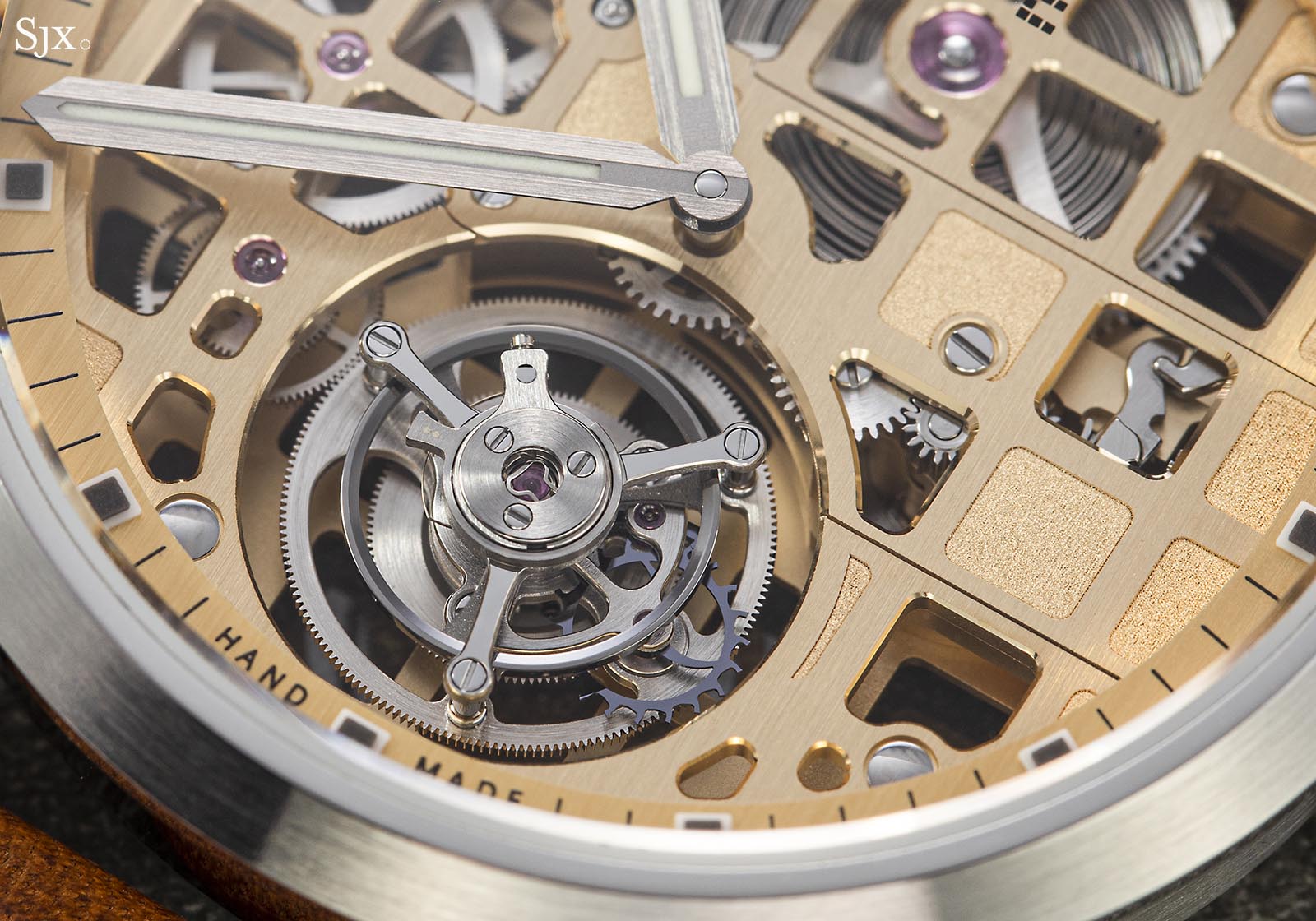 The silicon escape wheel visible within the tourbillon

Even though the movement is obviously cost-efficient, while also relying on modern materials for good timekeeping, it has been dressed up enough that it is appealing, especially for US$7,000 watch.

Though identical across the different colours, the finishing is most obvious on the movements in lighter colours, namely yellow gold or rhodium.

At the bottom of the dial are the words “hand made” for satire. The brand explained that “skilled hands are needed even when operating machines.” The ratchet and crown wheel are visible on the back, and there is no winding click; instead, the click spring itself wedges into the barrel ratchet wheel 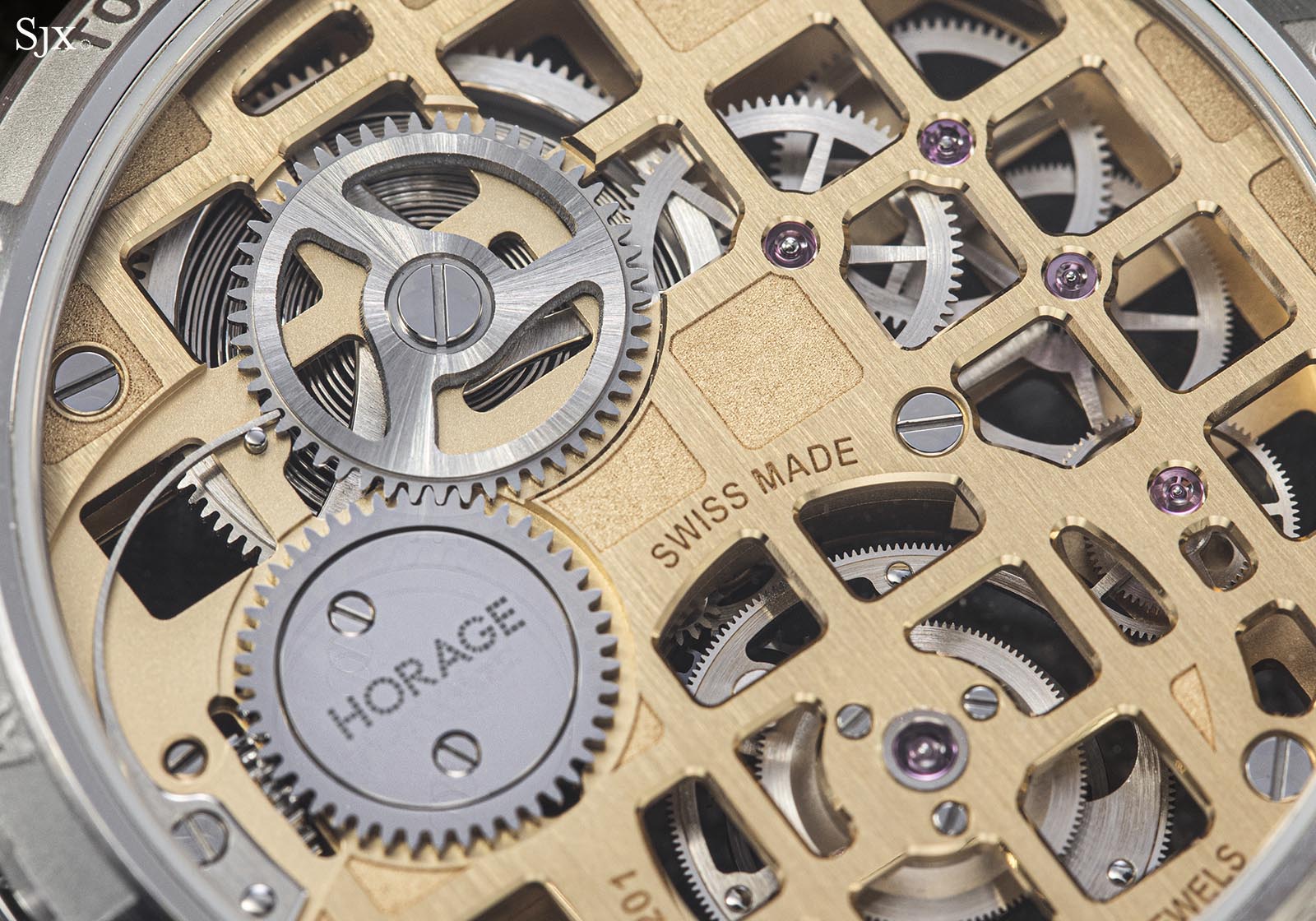 The Horage Tourbillon 1 offers significant value for money. Not only does it feature a slim, smartly-designed flying tourbillon movement, it also includes features that improve performance on a fundamental and tangible level, namely a silicon escapement and consequently a longer power reserve.

In addition, the Tourbillon 1 will be limited to just a single production run, with number made depending on how many are ordered, making it fairly uncommon. 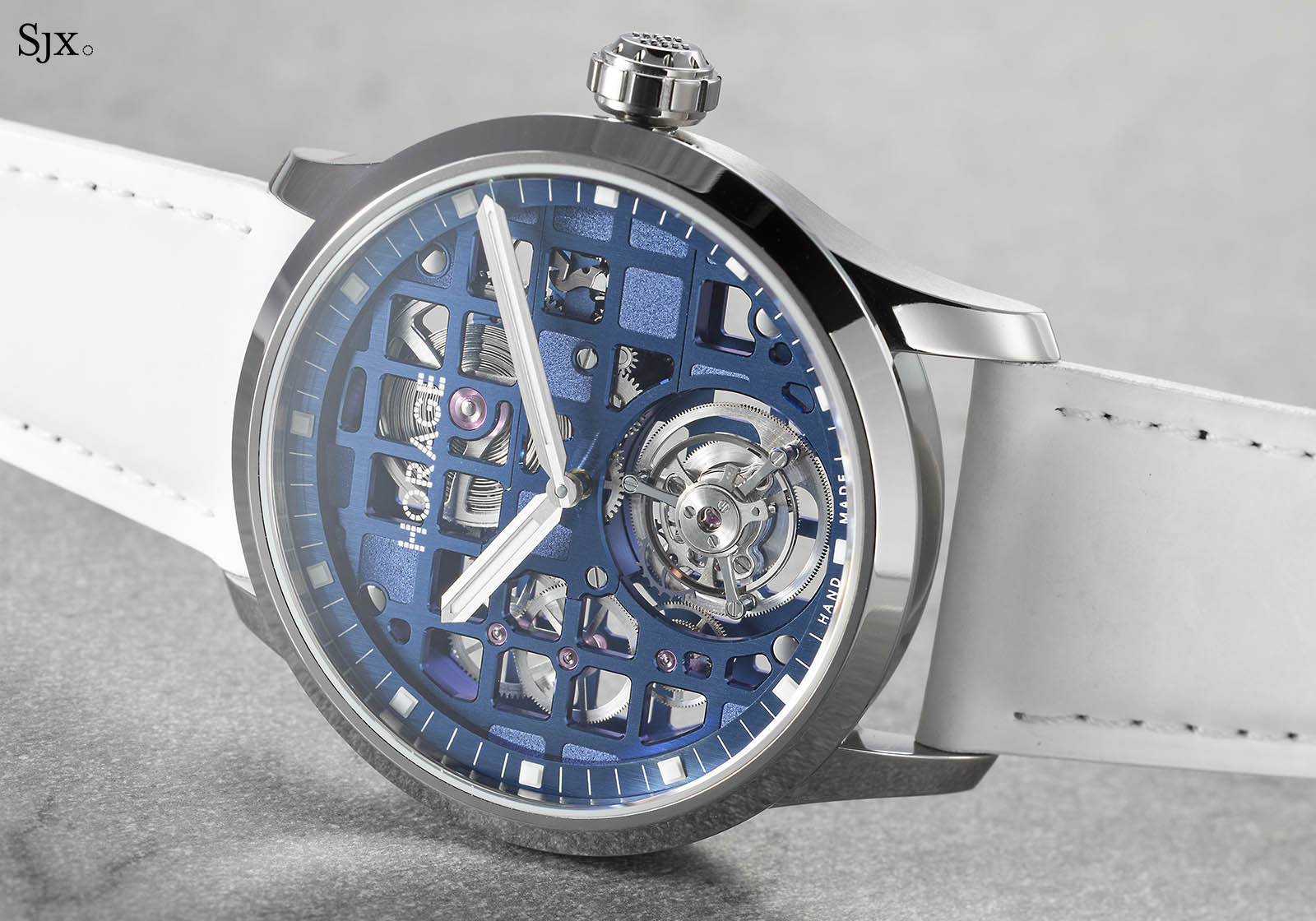 Correction March 6, 2020: Added additional information about the background of Horage’s founders, as well as the origins of the movement. Also, the silicon escapement in the K-TOU movement was produced by Sigatec, and not Hahn-Schickard as stated in a previous version of the article. Lastly, the case measures 39 mm at its base, and not 41 mm.