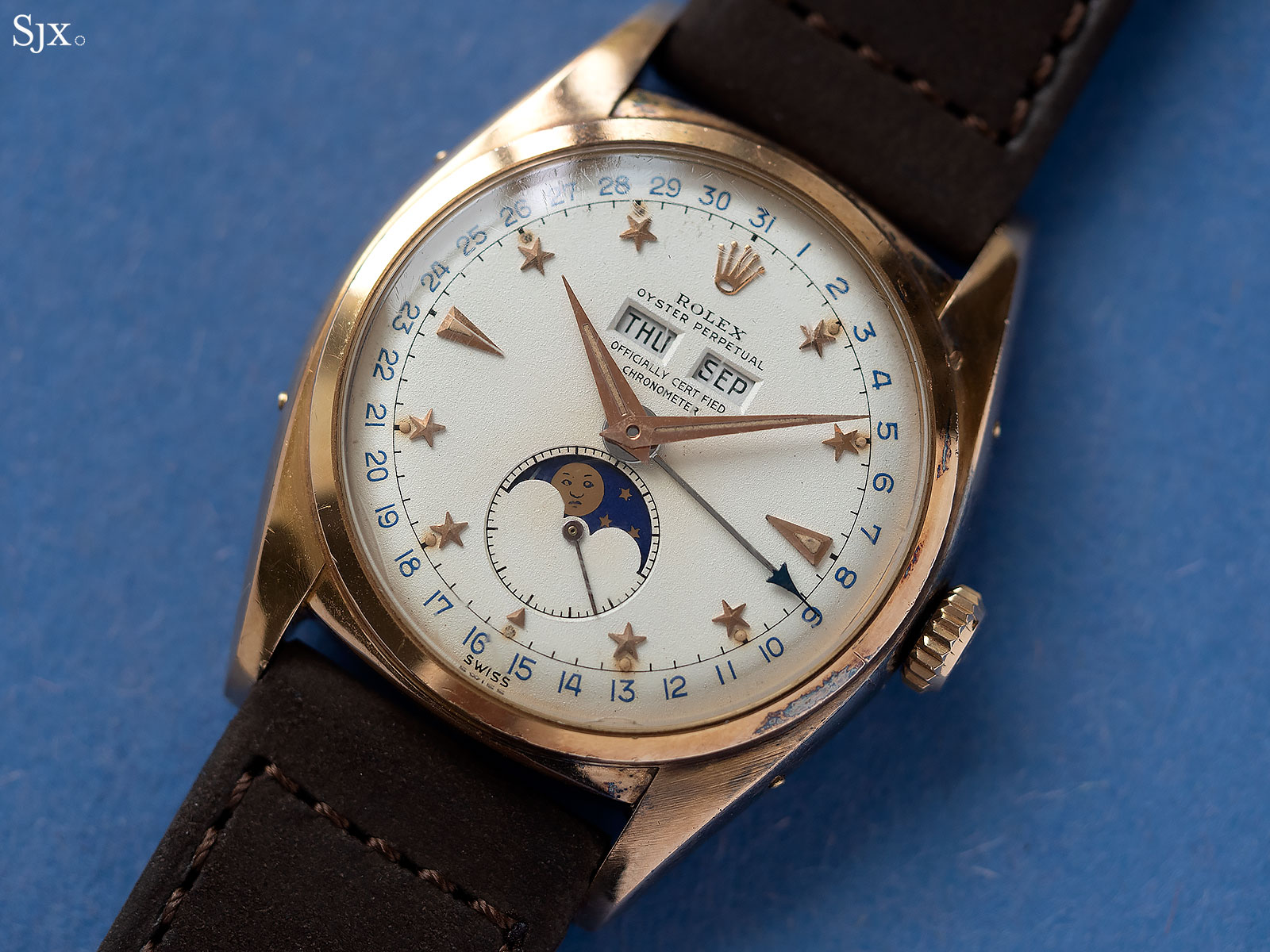 The third important vintage Rolex – in my opinion – at Phillips’ upcoming Geneva auction, after the ref. 4113 split-seconds chronograph and mint ref. 8171 “Padellone”, is the ref. 6062 “Stelline” triple calendar that once belonged to Gordon Bethune, the executive best known for turning around Continental Airlines during his decade-long tenure starting in 1994. The watch a sterling example of the ref. 6062 – and will sell for well over a million dollars – but it is also notable for what it says about the development of the vintage watch market.

Now 78 and retired, though he pops up regularly on CNBC to comment on the airline industry, Mr Bethune accumulated his watch collection over two decades. He sold the bulk of it in 2012, but remains probably the only famous business executive known to have collected watches in a serious fashion (another is perhaps former Hollywood talent agent Michael Ovitz, though he more widely regarded as an important collector of contemporary art).

Mr Bethune’s collection was inclined towards great, even some of the best, examples of important, uncommon and desirable watches, rather than extraordinarily or unique models. So he owned one of the best-preserved, all-original examples of the ref. 6062s “Stelline”, rather than say a well-worn ref. 6062 with a black, diamond-marker dial. 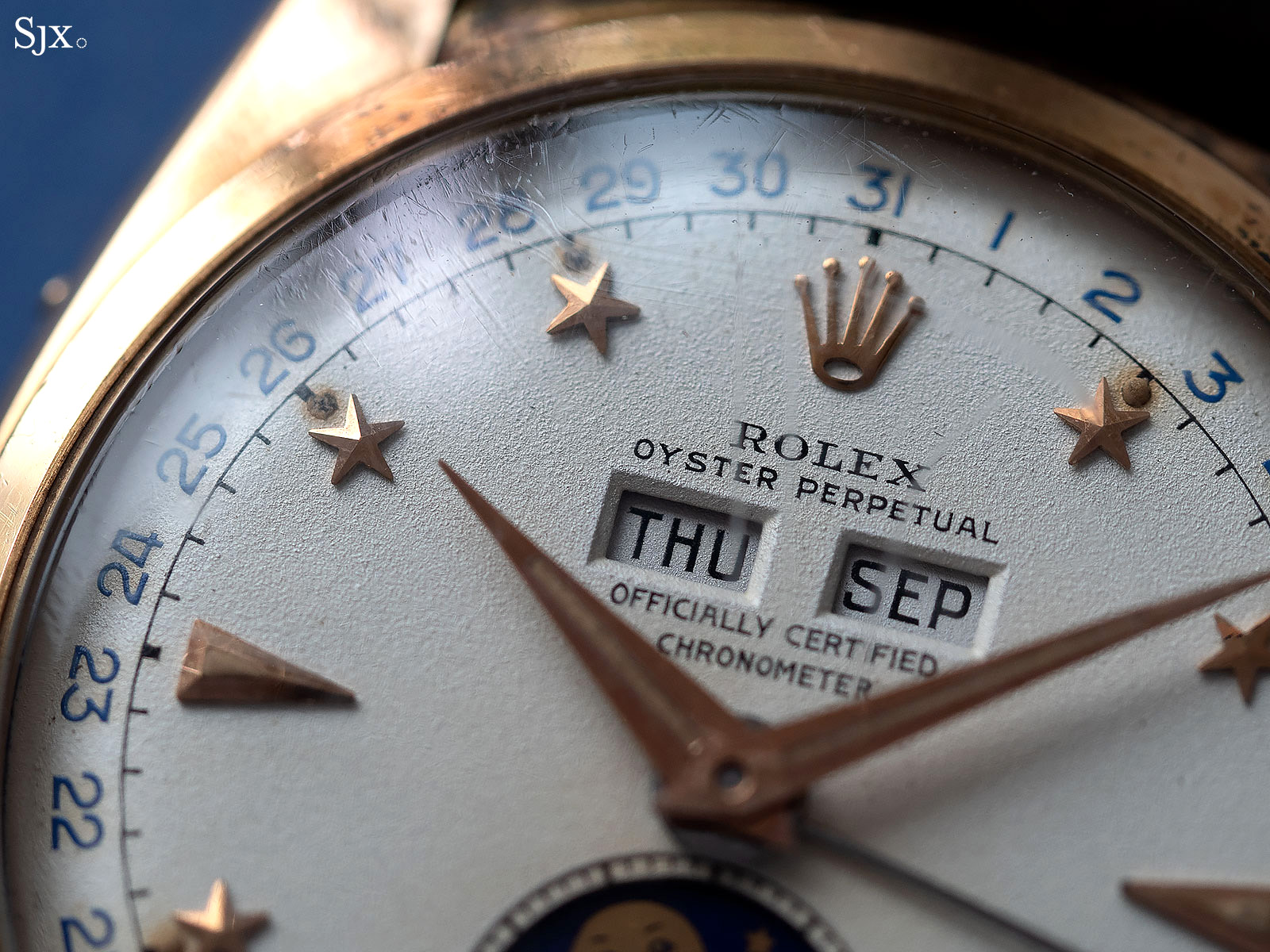 It was a cold day in December…

The Gordon Bethune Collection of Fifty Exceptional Vintage Wristwatches took place in December 2012 at Christie’s in New York, with the 50 watches selling for US$5.68m. Before the sale Mr Bethune had pledged the proceeds from the five most expensive watches to charity, so US$2.00m, including the proceeds from this ref. 6062, went to three charities he choose.

Though modest in value in comparison to today’s watch auctions, the result for Mr Bethune’s collection was quite major at the time. At the time of the sale, the record for the most expensive watch ever sold at auction had been set just a month before, at Christie’s in Geneva, when the Patek Philippe ref. 2499 in platinum formerly owned by Eric Clapton sold for 3.44m Swiss francs. That’s since been eclipsed by the Rolex Daytona once owned by actor Paul Newman, which sold for almost five times as much in 2017. 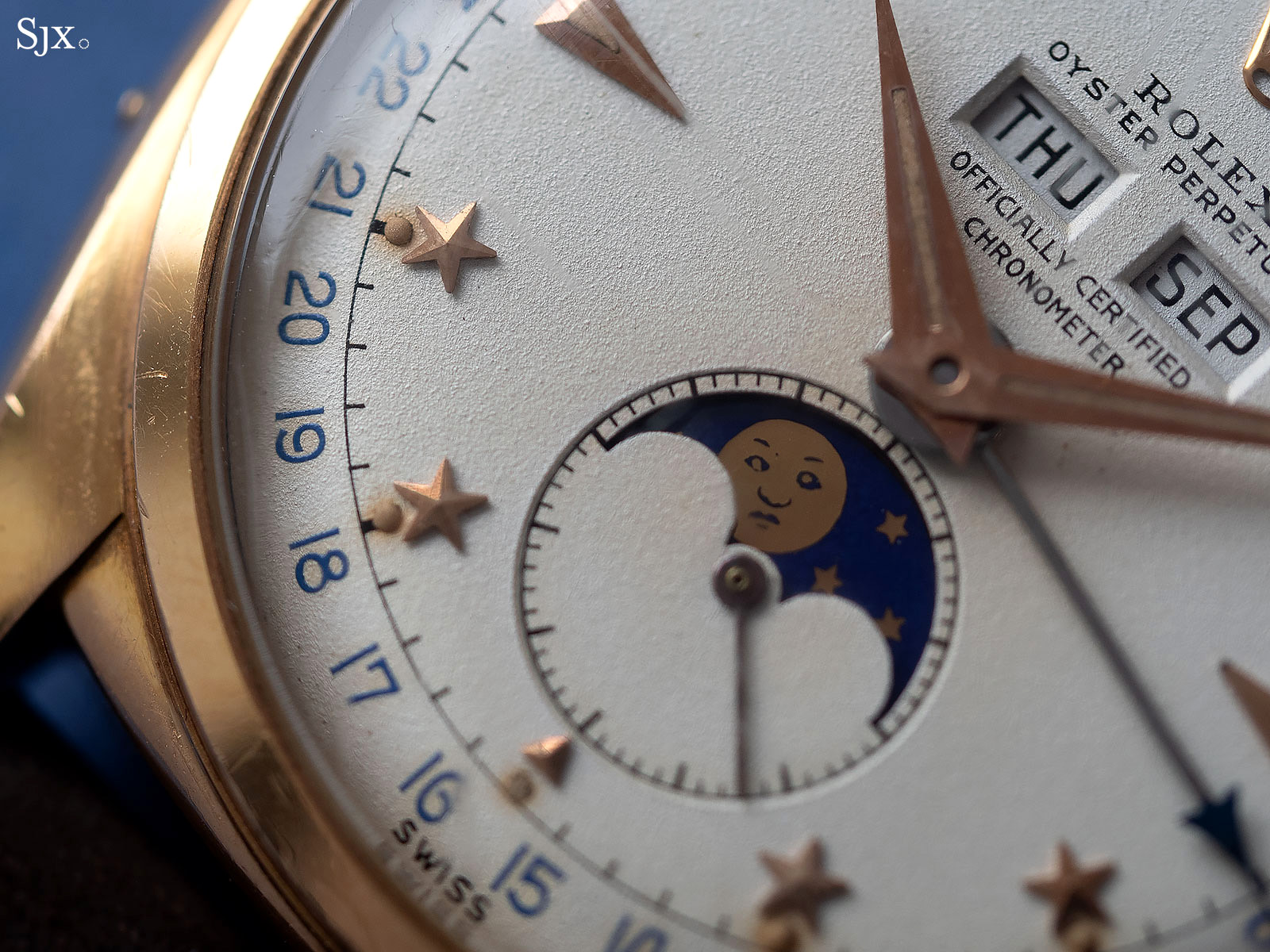 Looking back, the price achieved by Mr Bethune’s most valuable watch seems quaint. His Patek Philippe ref. 1518 “pink on pink” in pink gold with a matching pink-tone dial – only a dozen or so “pink on pink” ref. 1518s are known – sold for just US$674,500. It’s worth three to four times as much today. But the next most expensive, a Rolex ref. 6236 triple calendar chronograph “Jean-Claude Killy”, sold last year for only about 10% more than what it did in 2012.

And other watches from the collection have sold since for less. The oversized Patek Philippe ref. 570, for instance, sold in 2017 for about 15% less than it did in 2012, where it was the fifth most valuable watch (and thus the last watch with its proceeds going to charity).

Several factors could have been behind that, amongst them the fact that it was no longer “fresh to market” in 2017, and also the charitable pledge made by Mr Bethune before the 2012 auction that was widely covered in the press. Or it would also be down to changing tastes: the ref. 570 is two-tone rather than being entirely steel or pink gold, both of which are more desirable now than a combination of the two. 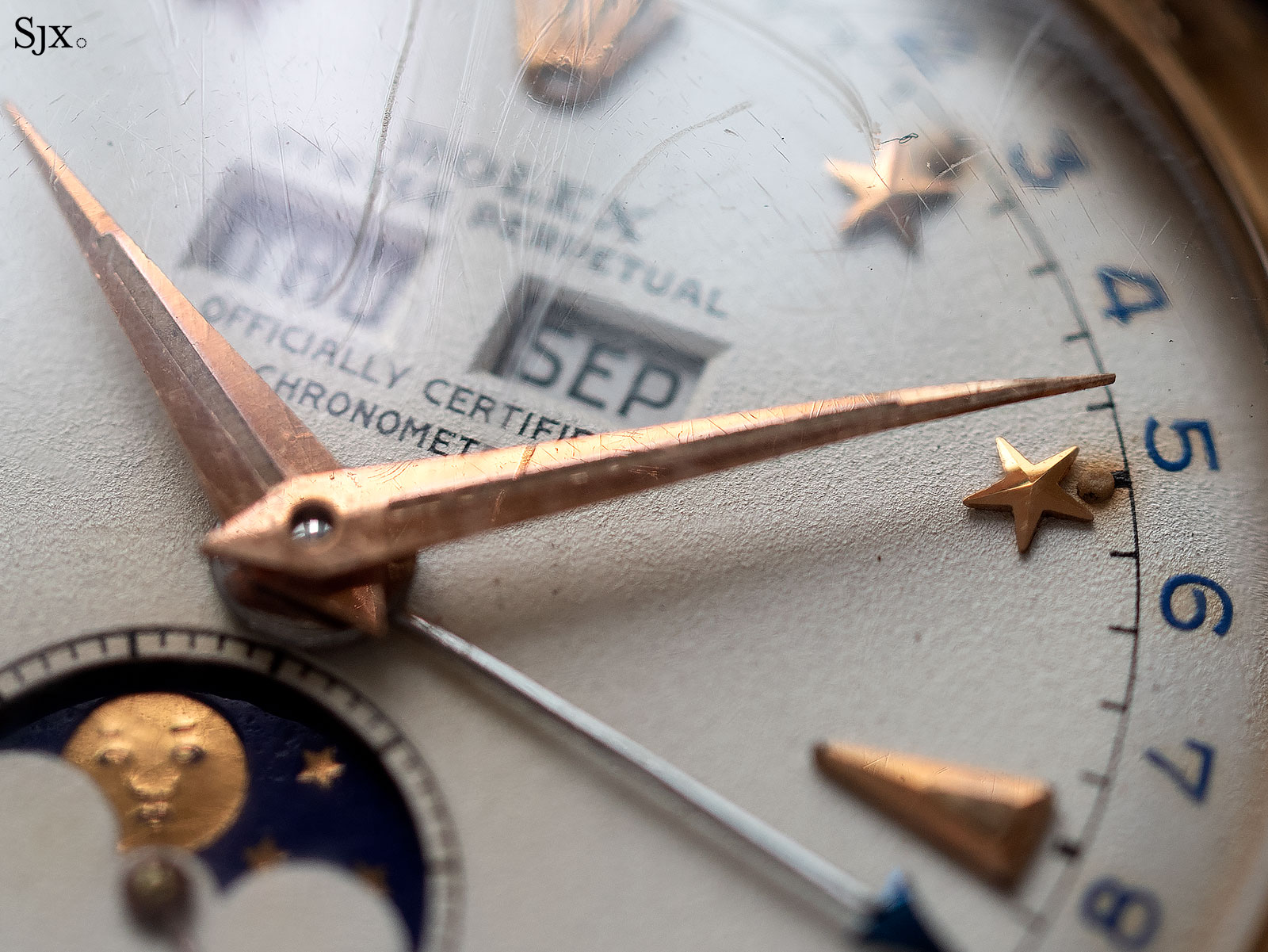 The million-dollar estimate is because this ref. 6062 “Stelline” is valuable on several levels, beyond having come from Mr Bethune’s collection. First, the triple calendar ref. 6062 is rare and sought-after model, having been produced for only a few years starting in 1950. It was made in yellow gold, steel, and pink gold, which is the most uncommon.

And an oft repeated fact: the ref. 6062 and the ref. 8171 of the same period were the only triple calendar Rolex models ever made, until the Cellini Moonphase was launched in 2017. But the ref. 6062 was the only one in a water-resistant Oyster case – the ref. 8171 had a snap back – making the ref. 6062 more intrinsically Rolex (and a ref. 8171 in great condition even harder to find).

This also has star-shaped hour markers on the dial – stelline is Italian for “small star” – the most desirable dial type for the ref. 6062, except for the even more uncommon black lacquered dial, as found on the record-setting “Bao Dai” ref. 6062, which also had diamond hour markers. Though not exceedingly rare – ref. 6062s with star dials come up at auction at least once a year – star dial ref. 6062s are widely regarded as the quintessential variant of the reference.

And within the star dials there were two generations. Here, the “lume” dots on the dial are on the dial, beside the star hour markers, a feature of earlier dials. Later dials had the luminous dots on the centre of each star. 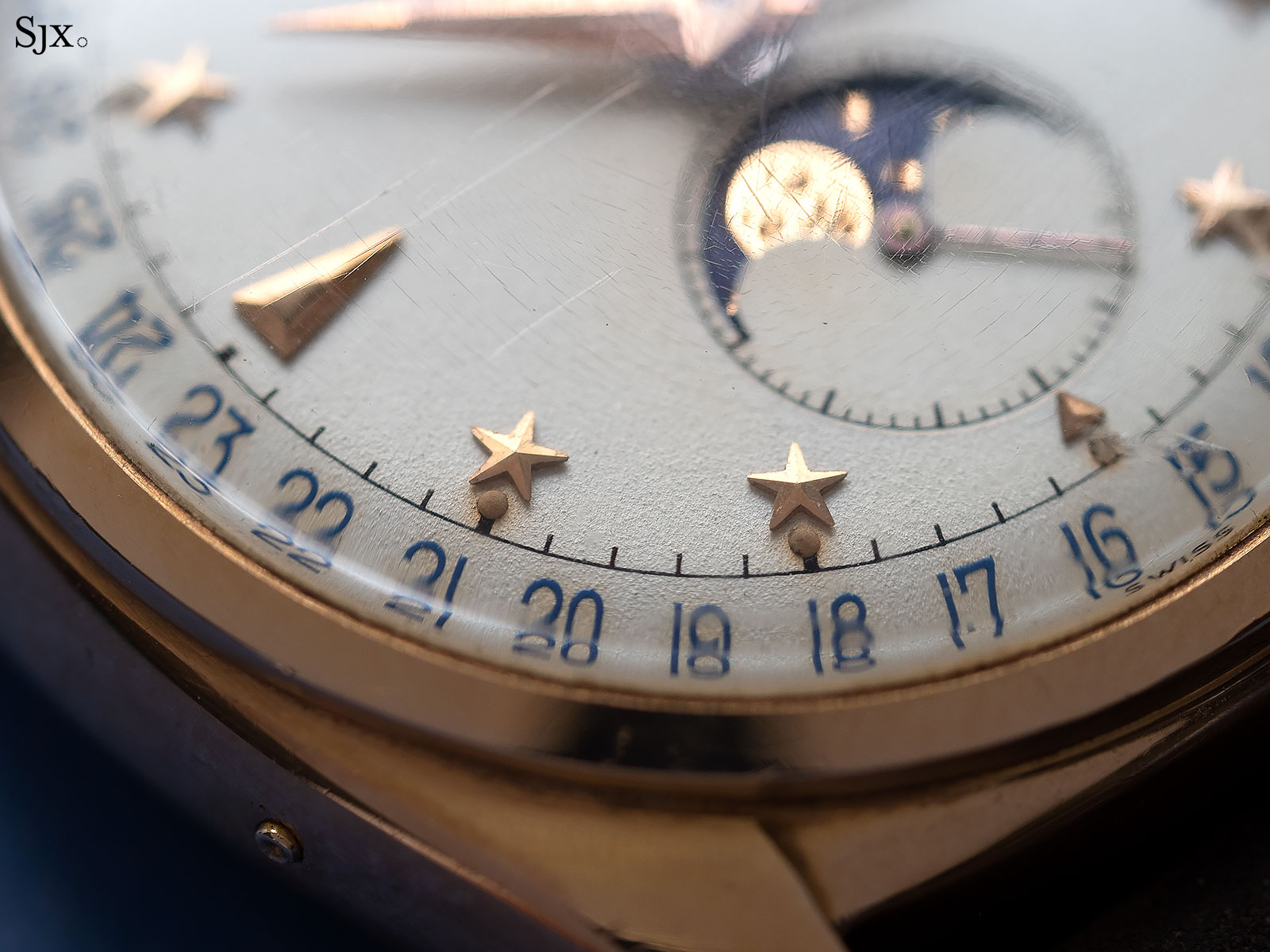 According to the lot essay in 2012, this watch was purchased by Mr Bethune from an estate sale, and unlike the ref. 8171 in the same sale that seems almost new, this ref. 6062 was probably worn regularly but carefully a long, long time ago. In short, the watch is honest, original and well maintained.

The case has a couple of nicks and dings, but most probably retains its factory surface finish, with brushing on the top and back of the lugs. More tellingly, the correctors for the calendar show a bit of wear, indicating whoever owned it in the past ensured the calendar was kept correct. 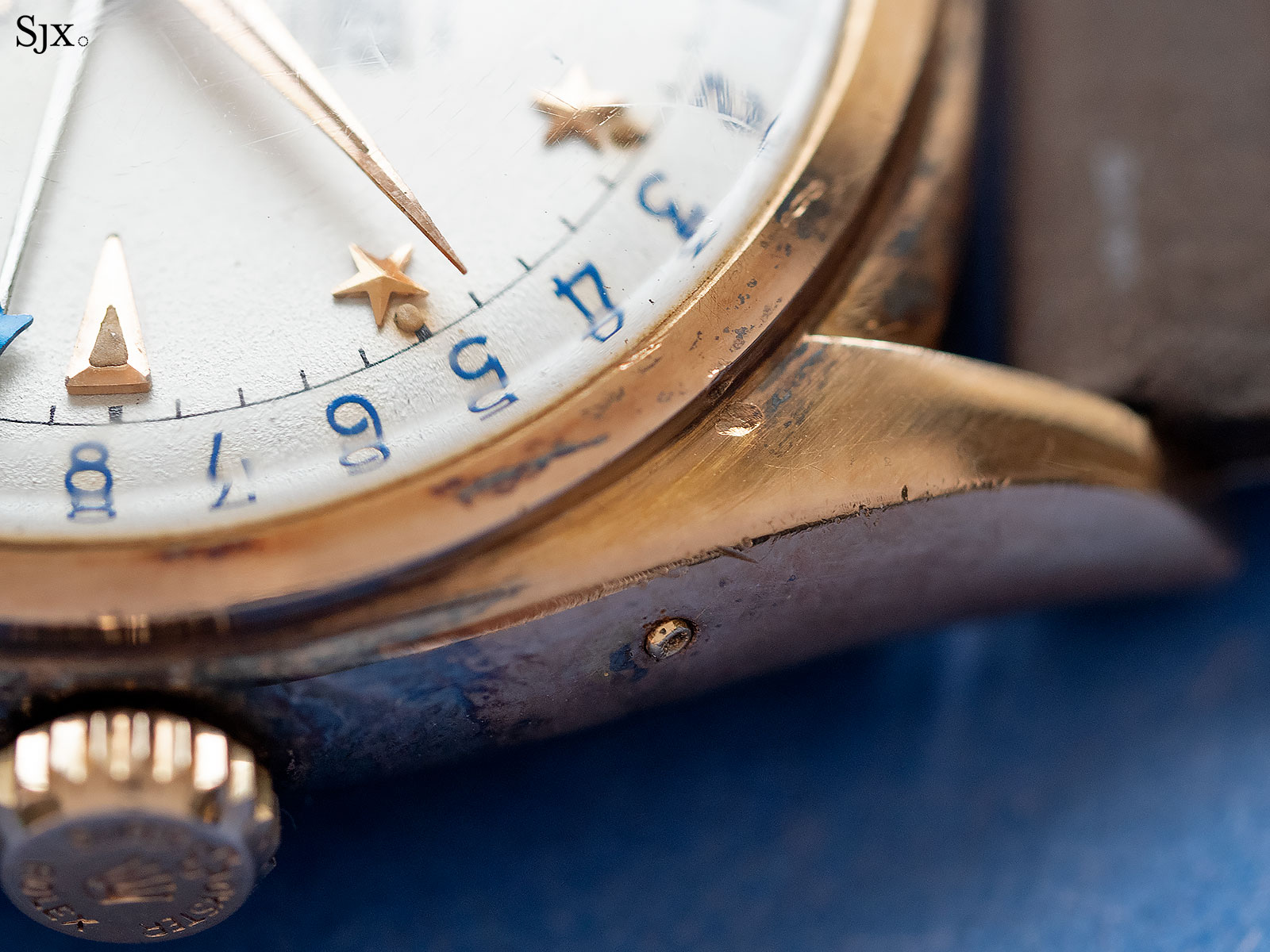 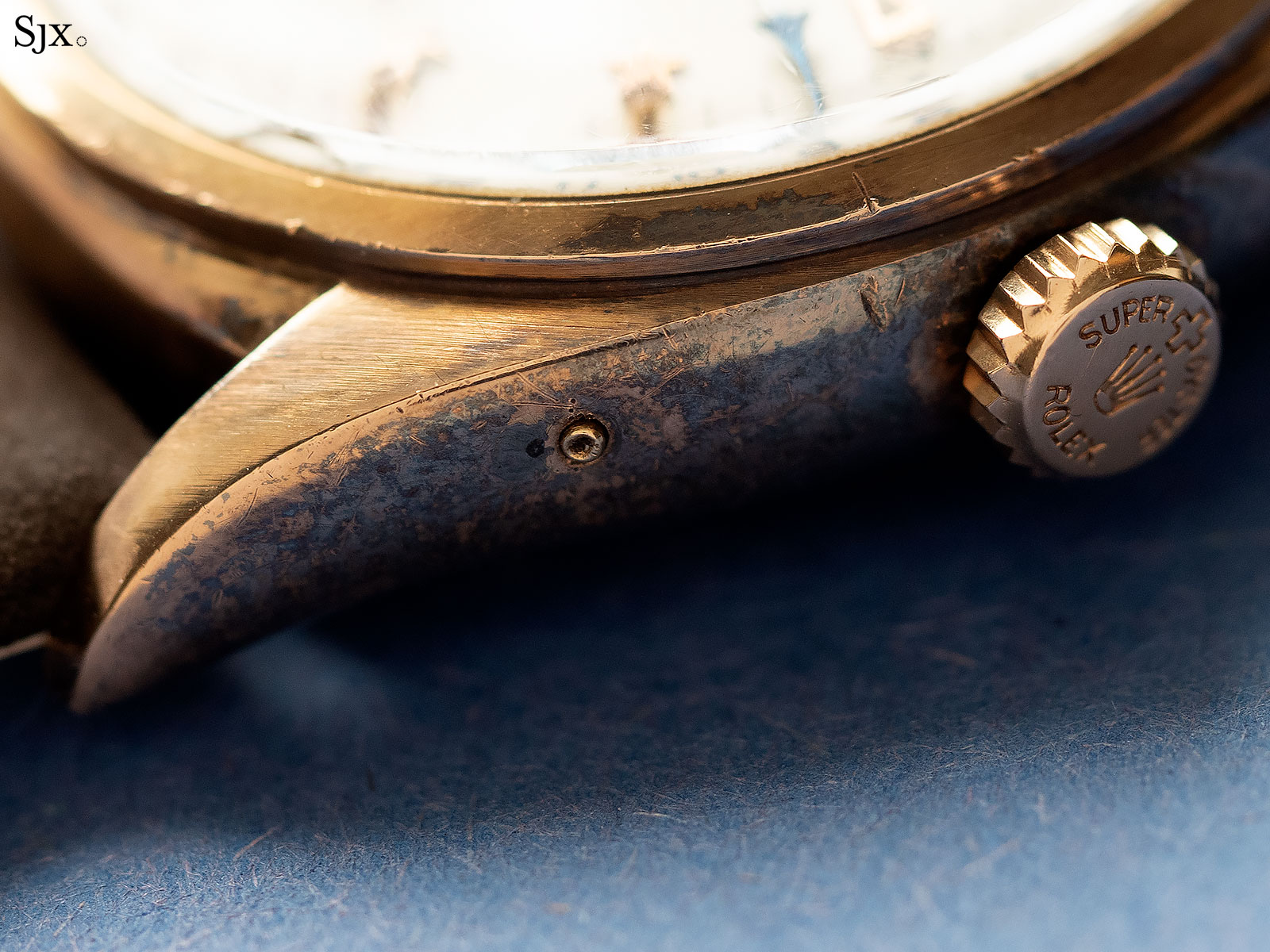 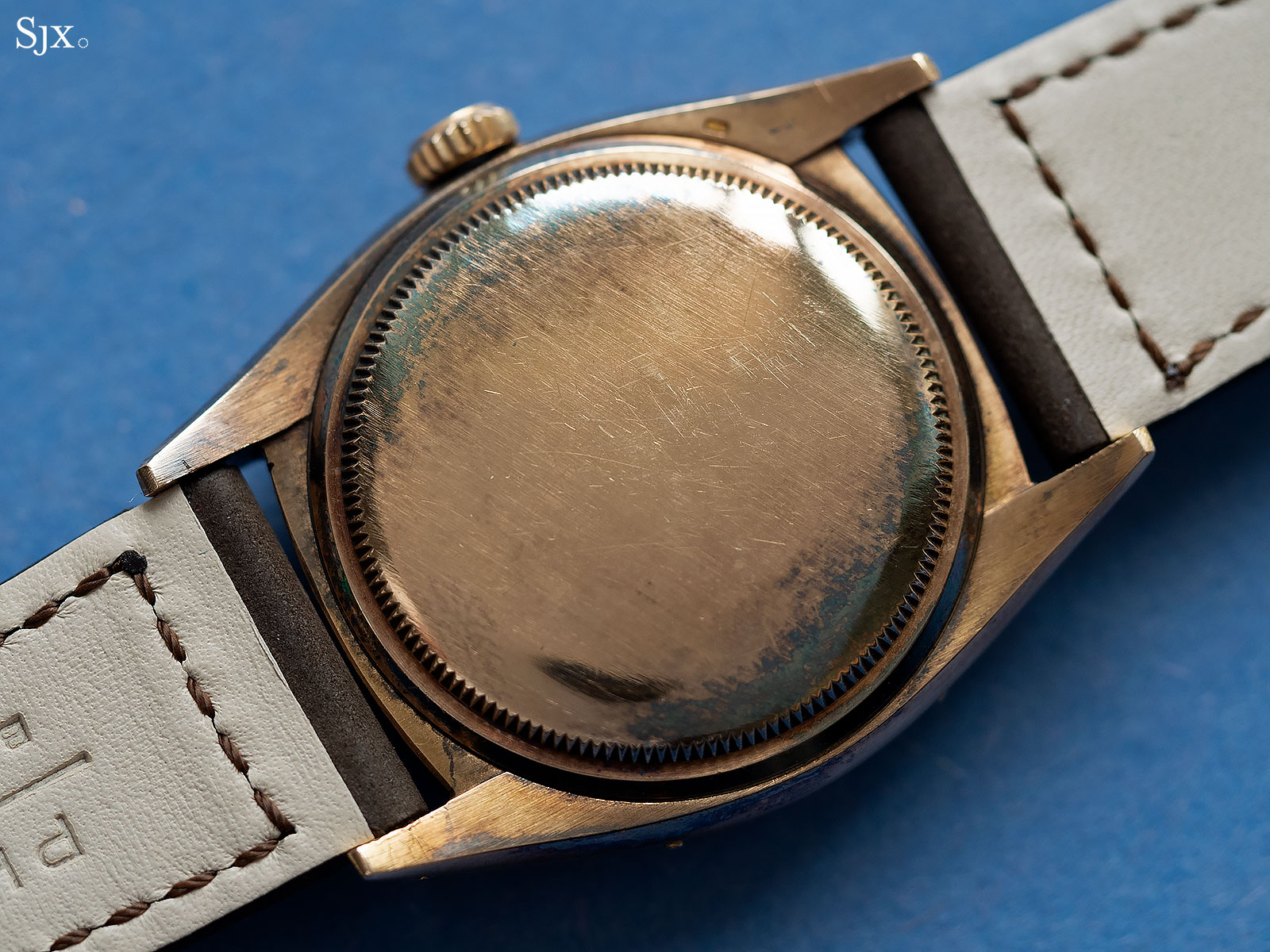 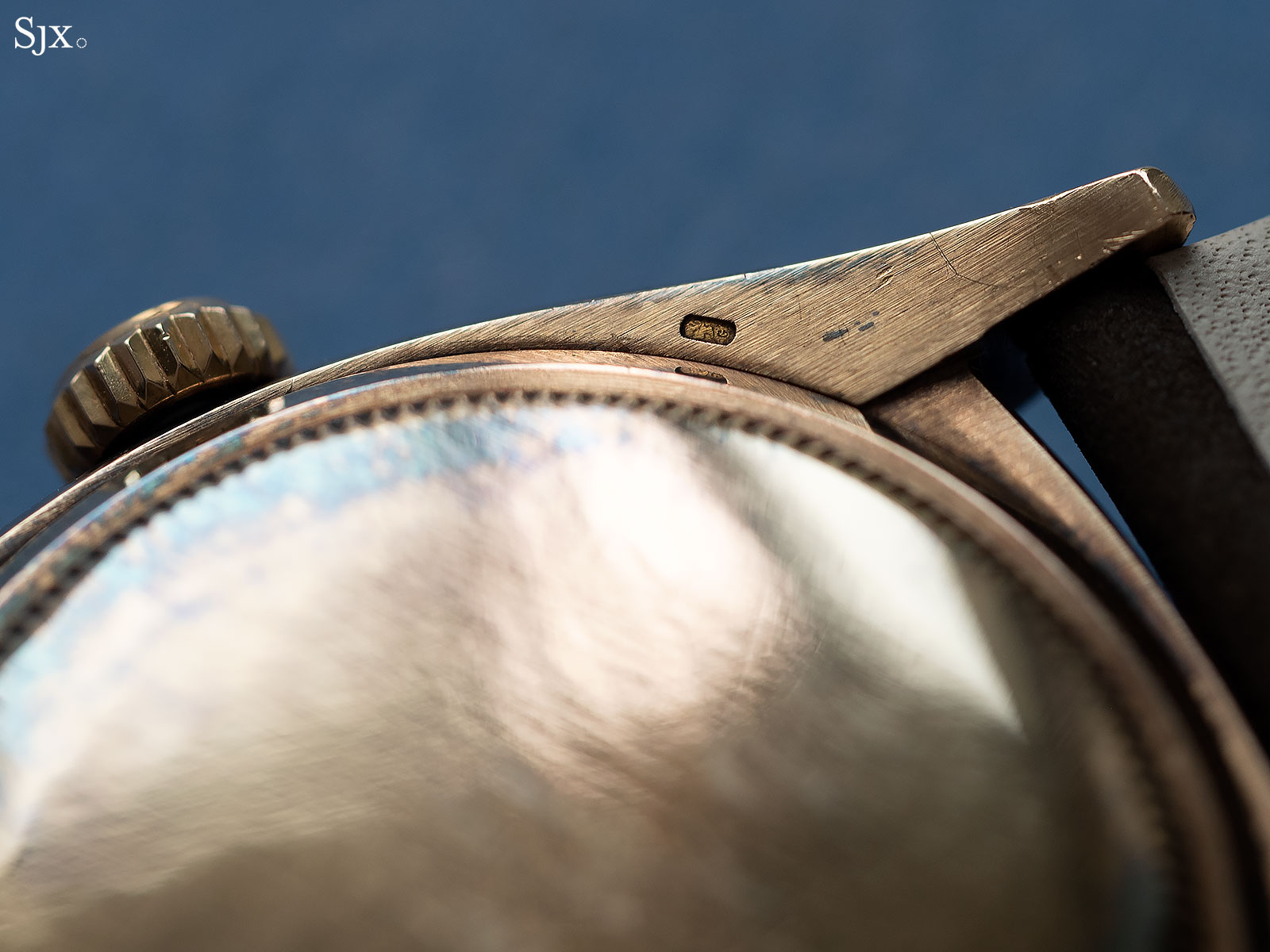 The deep hallmark on the back of the lug

Crucially, the dial is in excellent and original shape. Important details like the granular dial surface and blue date numerals are intact and unmarred. However, some of the luminous radium dots have been lost over time – a reassuring element of the dial’s originality. 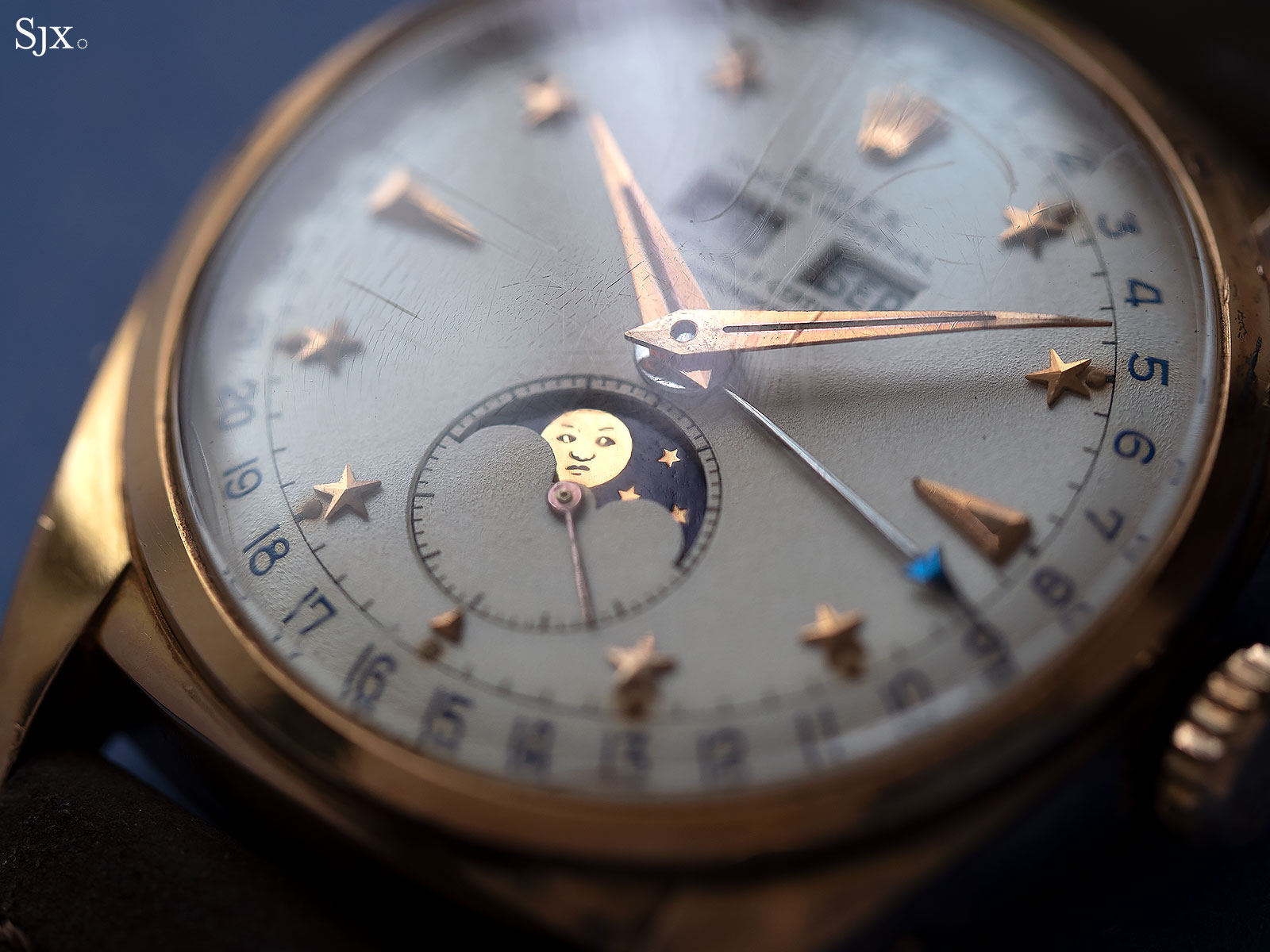 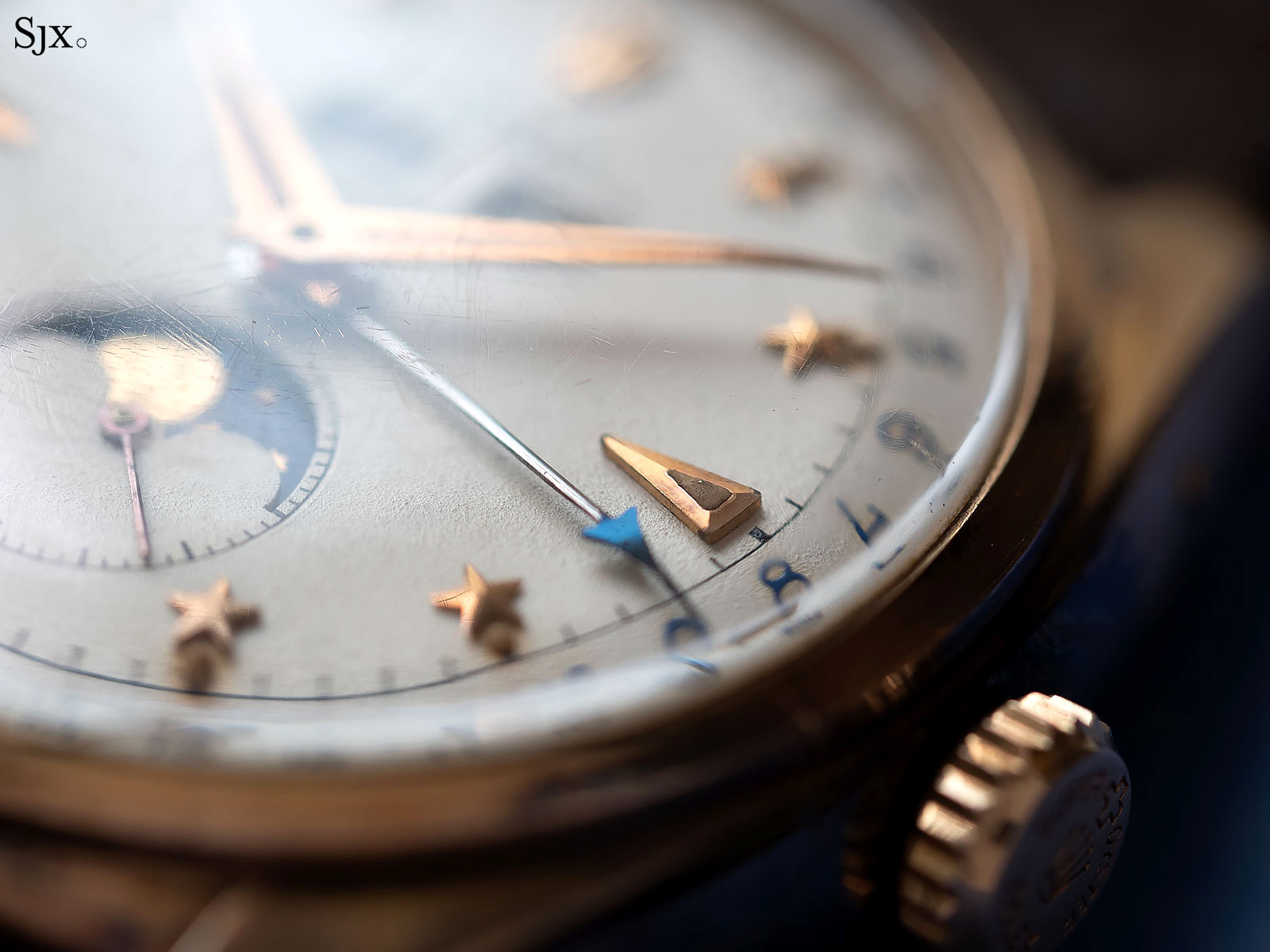 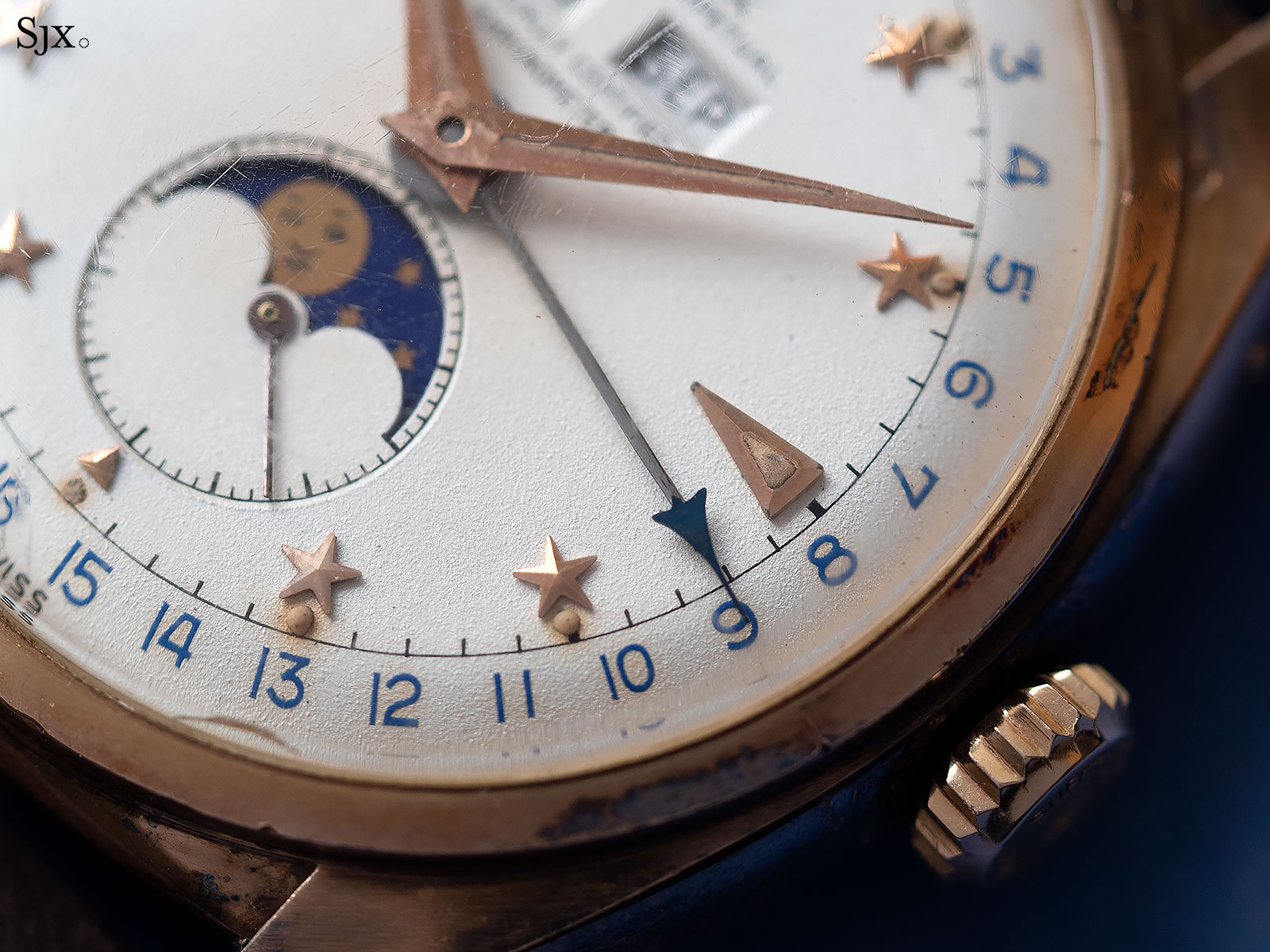 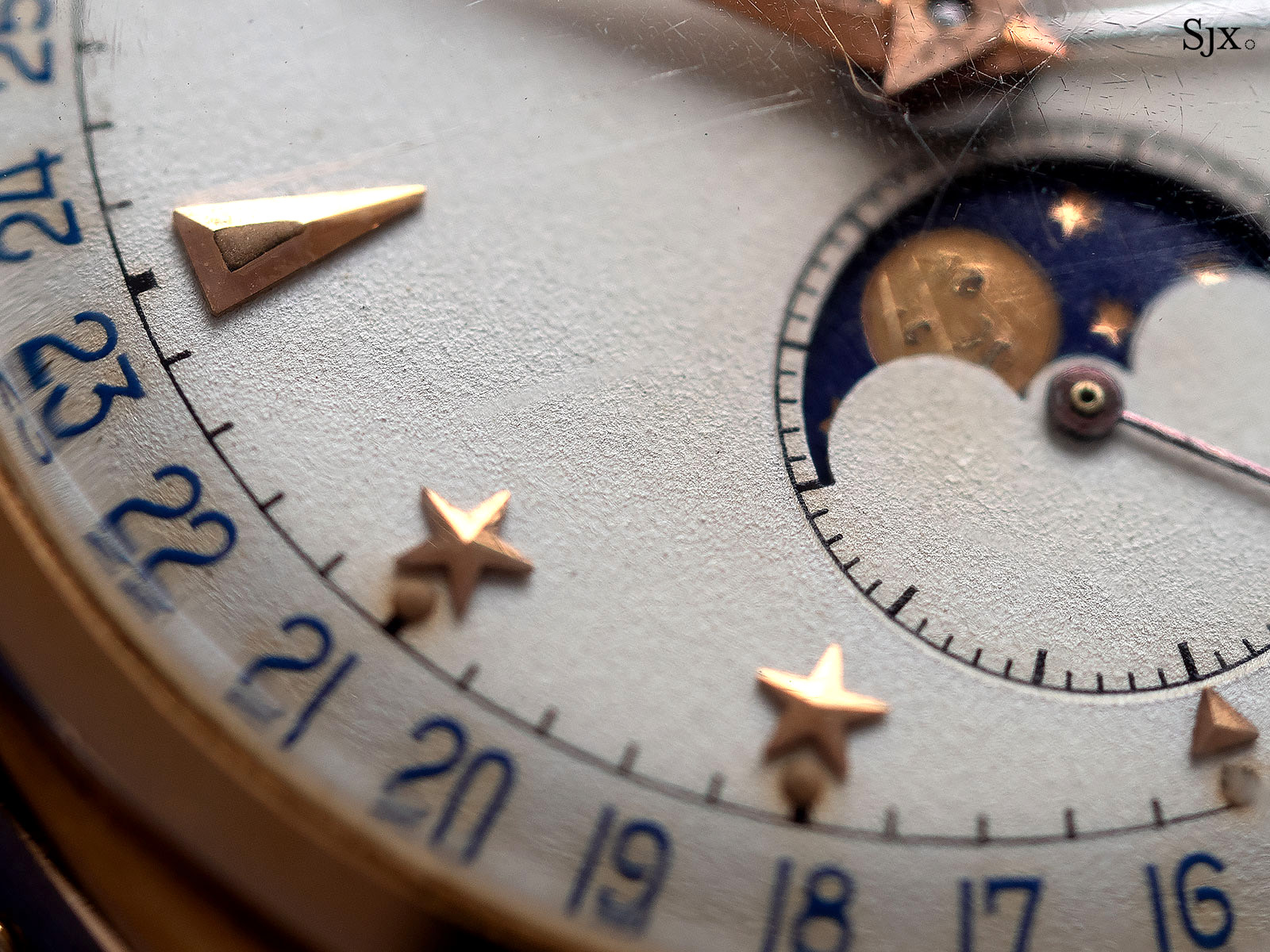 The fact that collectors still refer to watches as coming from Mr Bethune’s collection indicates he had a sharp eye for sharply-preserved watches – and collectors also love a good, simple story – and a taste that largely remains current today. Provenance aside, this ref. 6062 is just one of the best examples of the model.