If I had a million dollars, or maybe two, to buy a Rolex, I could perhaps buy a ref. 4113 split-seconds, which is very large, very flat – a bit too large and flat for me – and exceptionally rare. Or I could buy a ref. 8171 triple calendar in steel, one in almost “new old stock” condition, as Phillips has in its upcoming Geneva auction.

The ref. 8171 in question reminds me of the 369-year old Jehan Cremsdorff pocket watch Sotheby’s sold in the summer – it’s hard to believe something that old, admittedly not quite four centuries, can be so well preserved. The “Padellone” is incredibly – incredibly – clean and crisp. 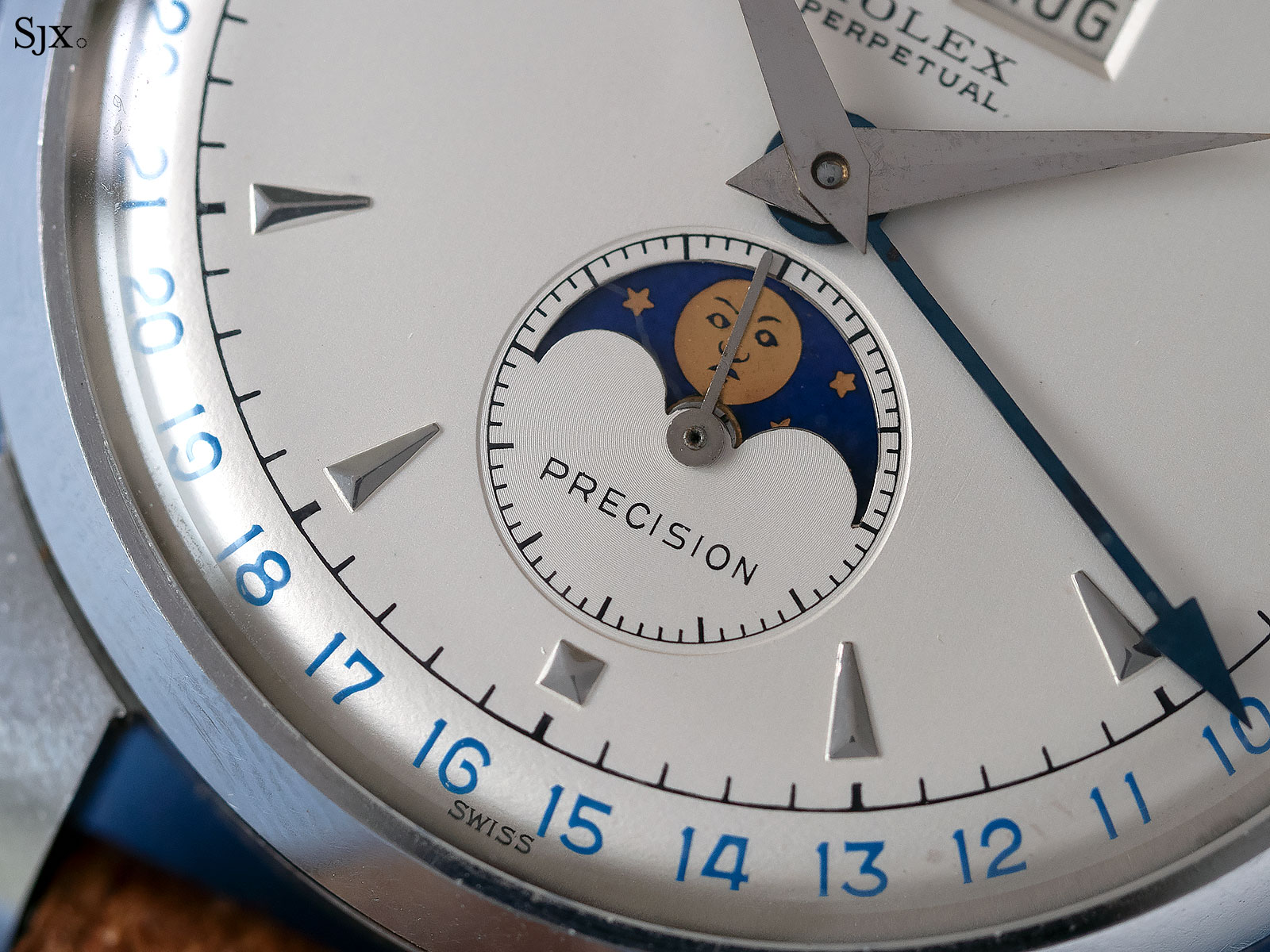 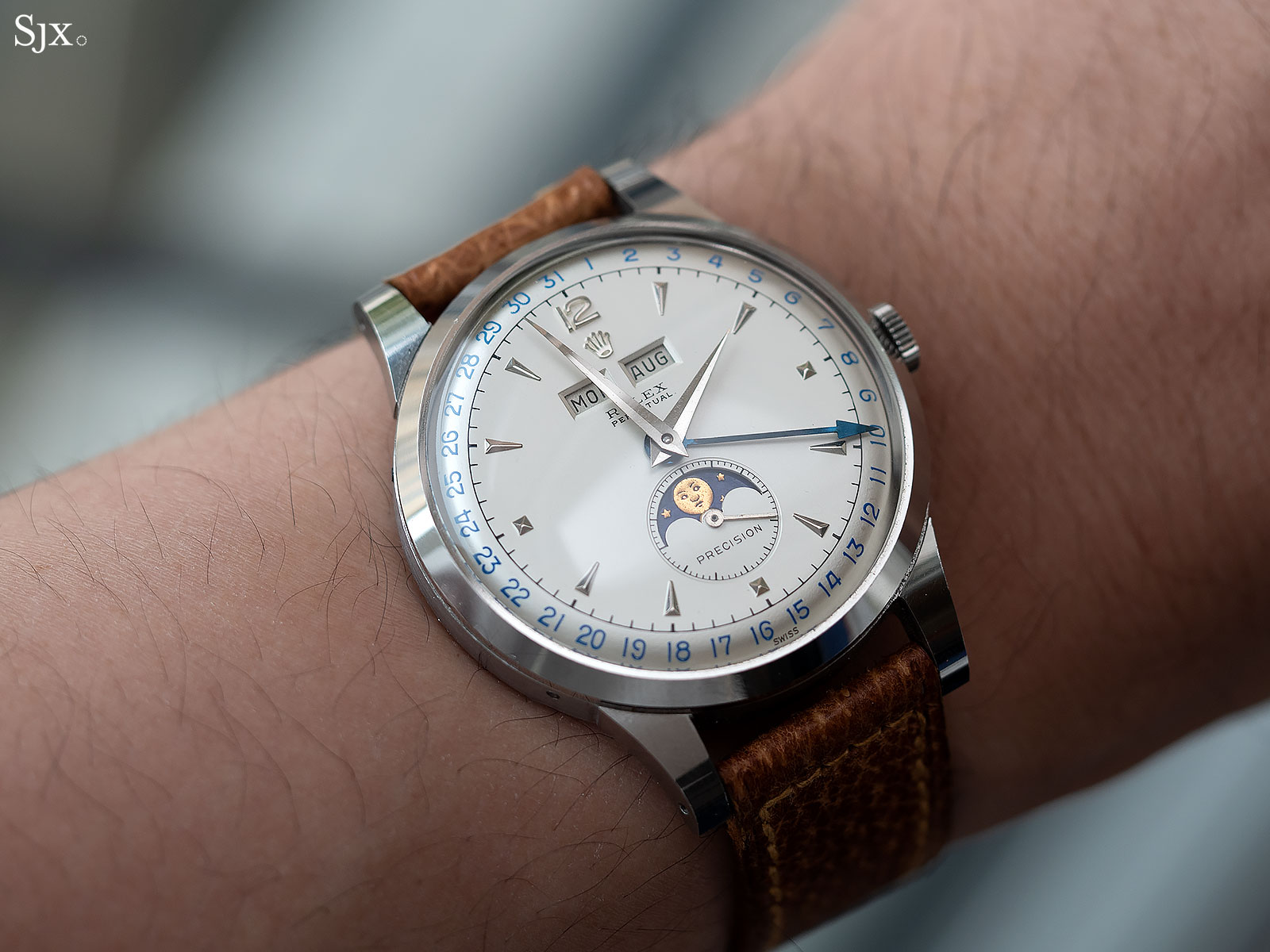 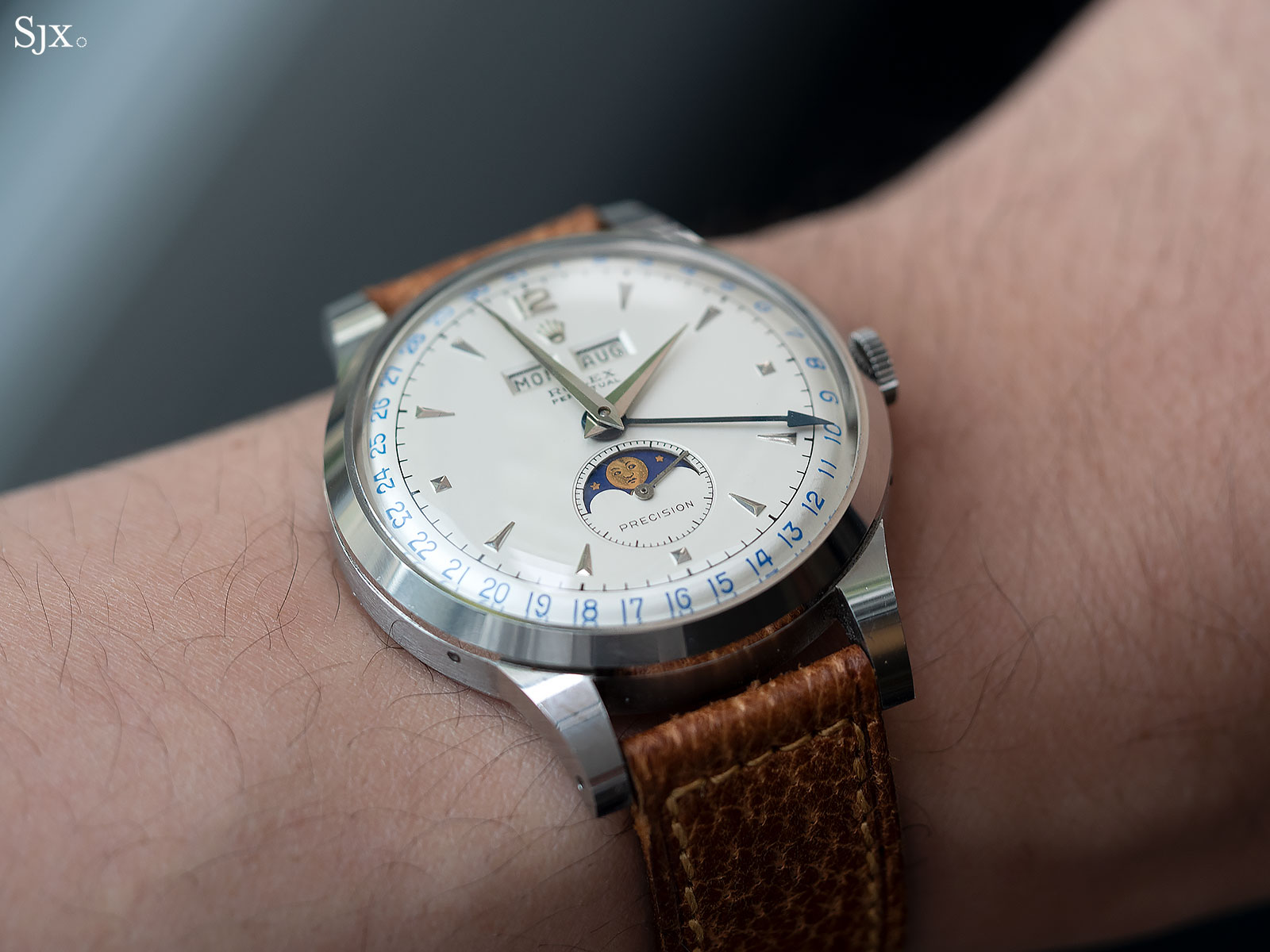 Up close, the ref. 8171 speaks for itself. The dial looks like the watch left the factory recently. It is clean, neat and the date track is in pure, vivid blue. Similarly, the hands are free of marks, meaning they were seldom, or never, removed from the dial. 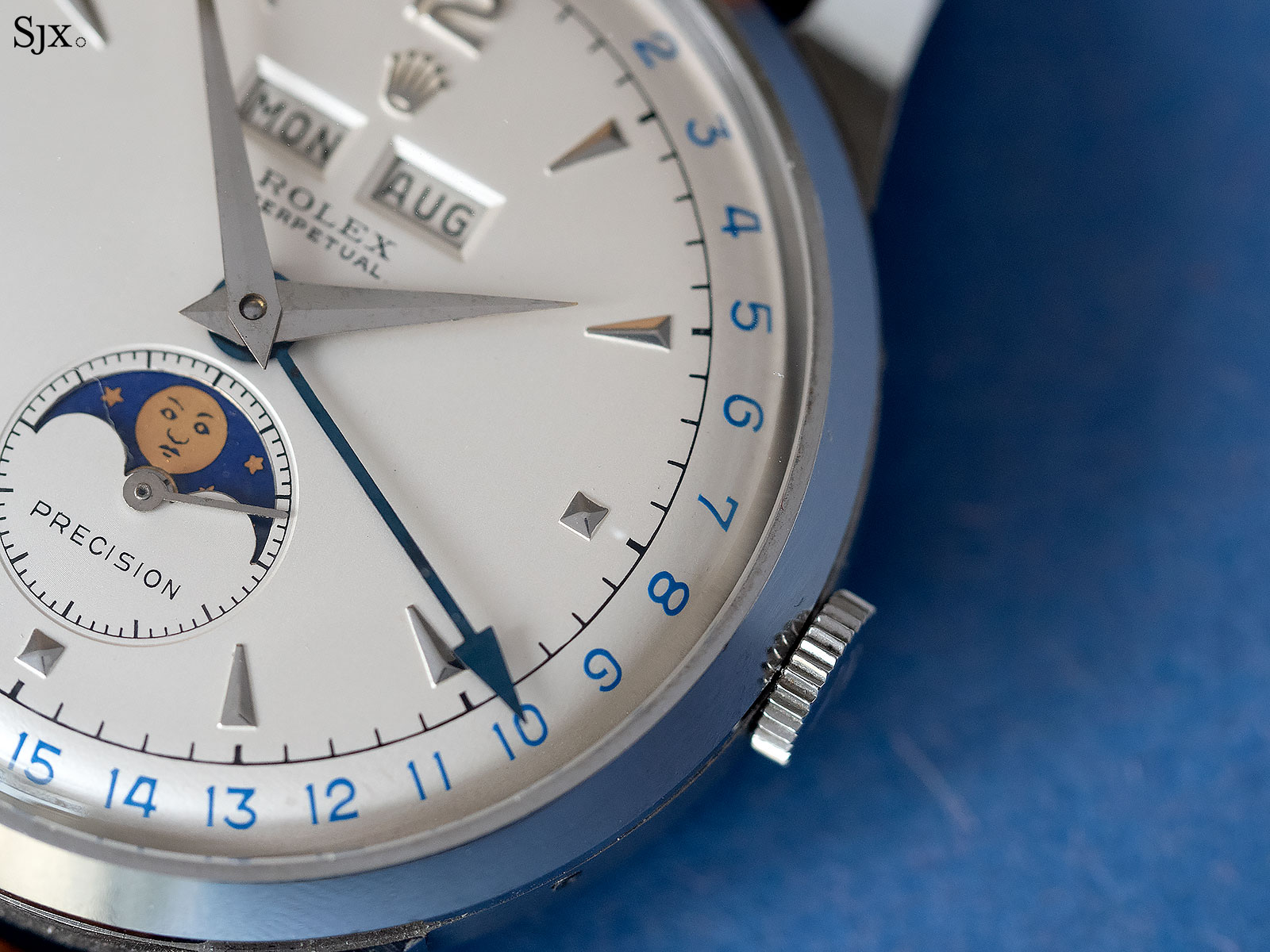 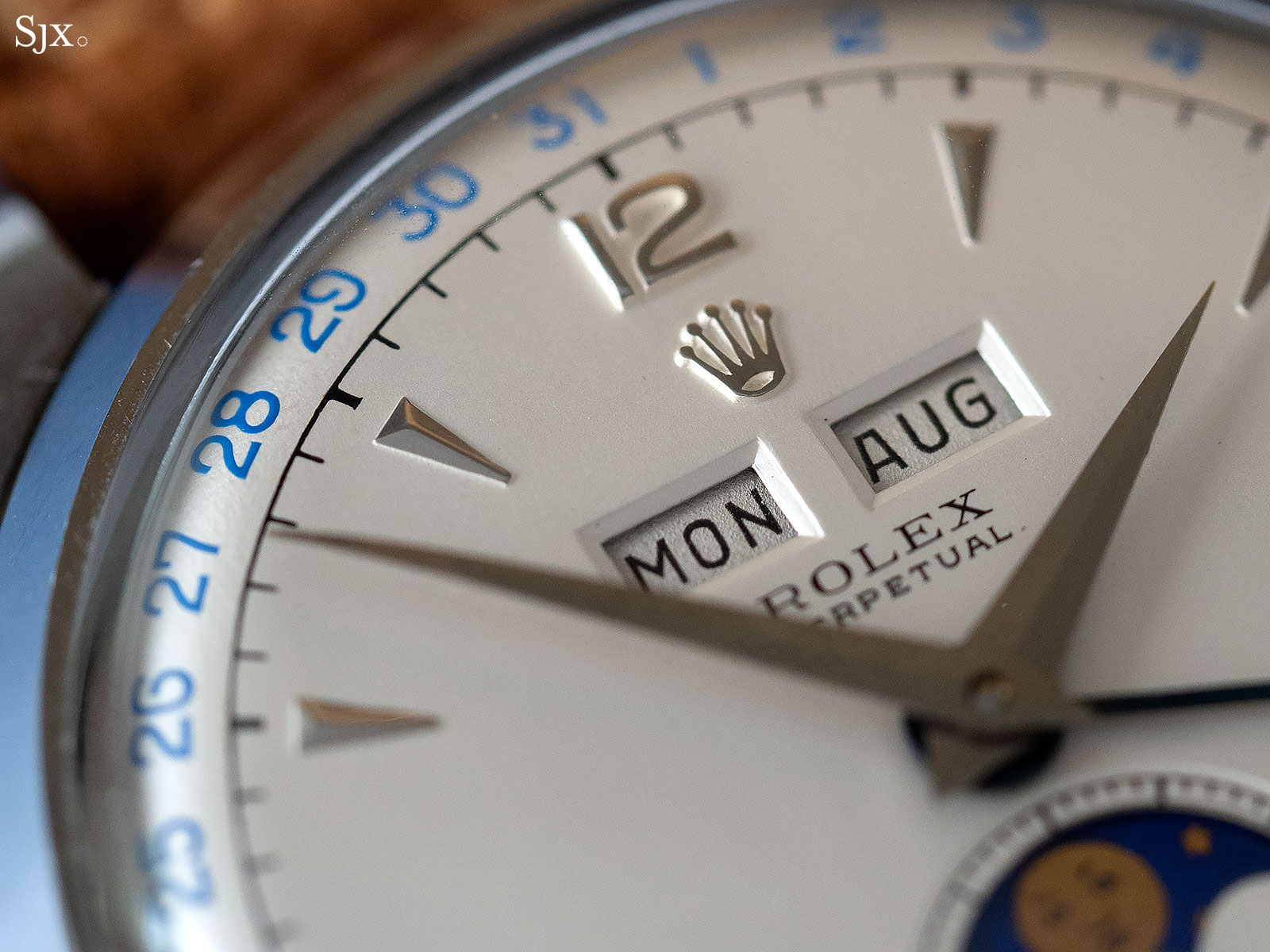 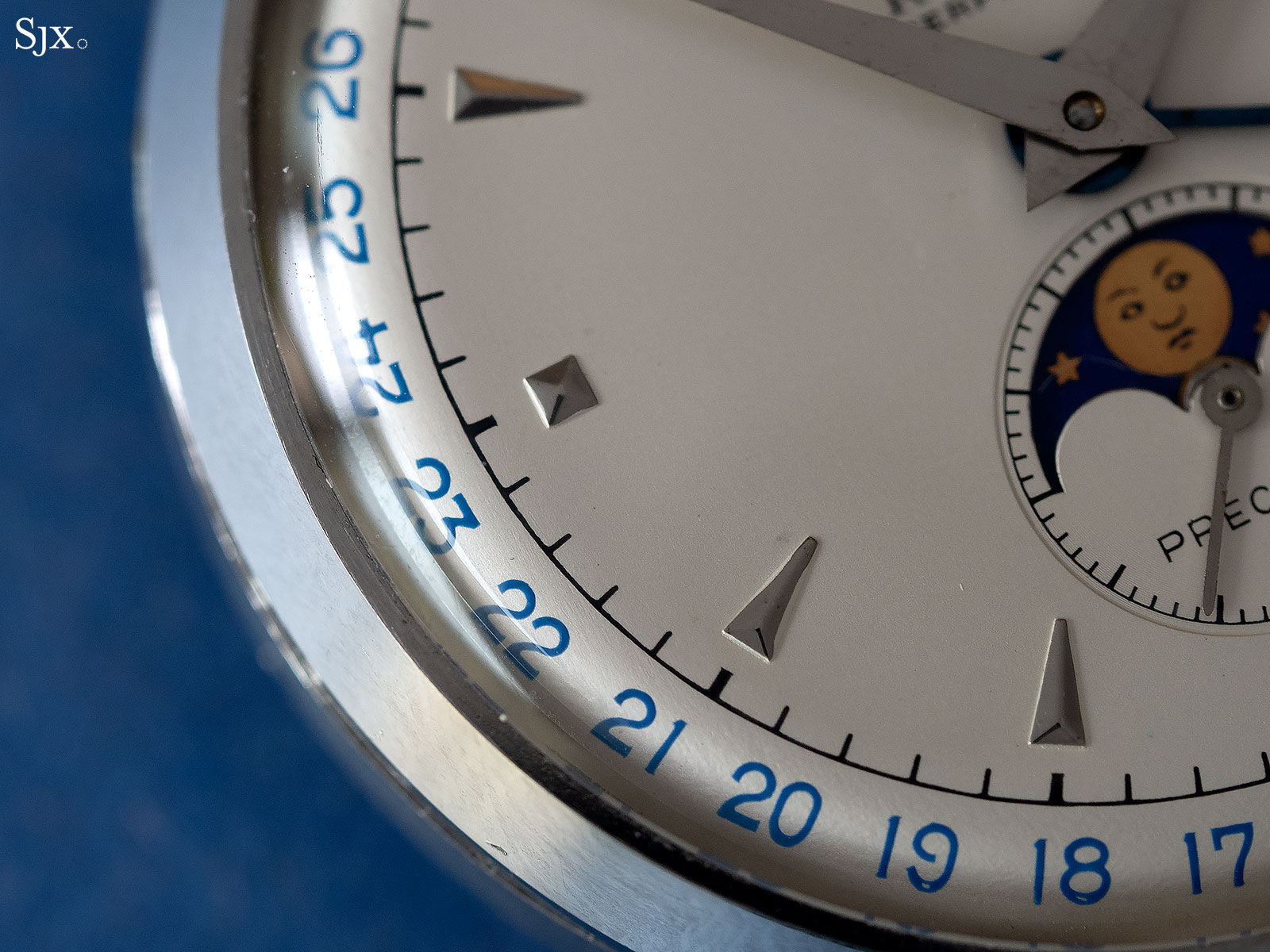 The condition of the dial is all the more unusual due to the fact that the ref. 8171 is not an Oyster. Instead, it has a snap-on back, instead of the water-resistant, screw-on back found on the Oyster watch case.

Over time, snap backs tend to lose their water-resistance as a consequence of corrosion or deformation from repeated opening, which is why most ref. 8171s have dials that show obvious ageing. 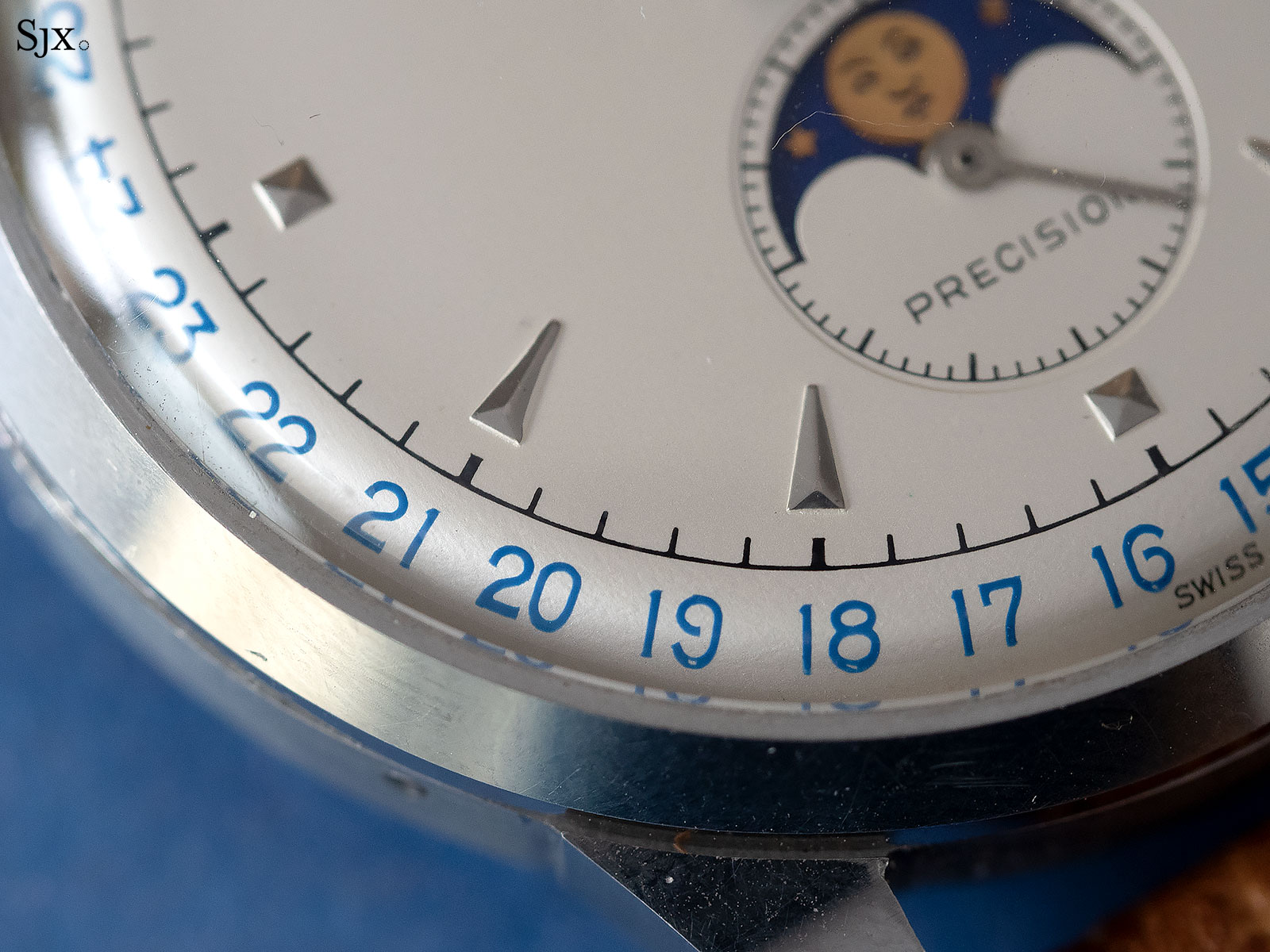 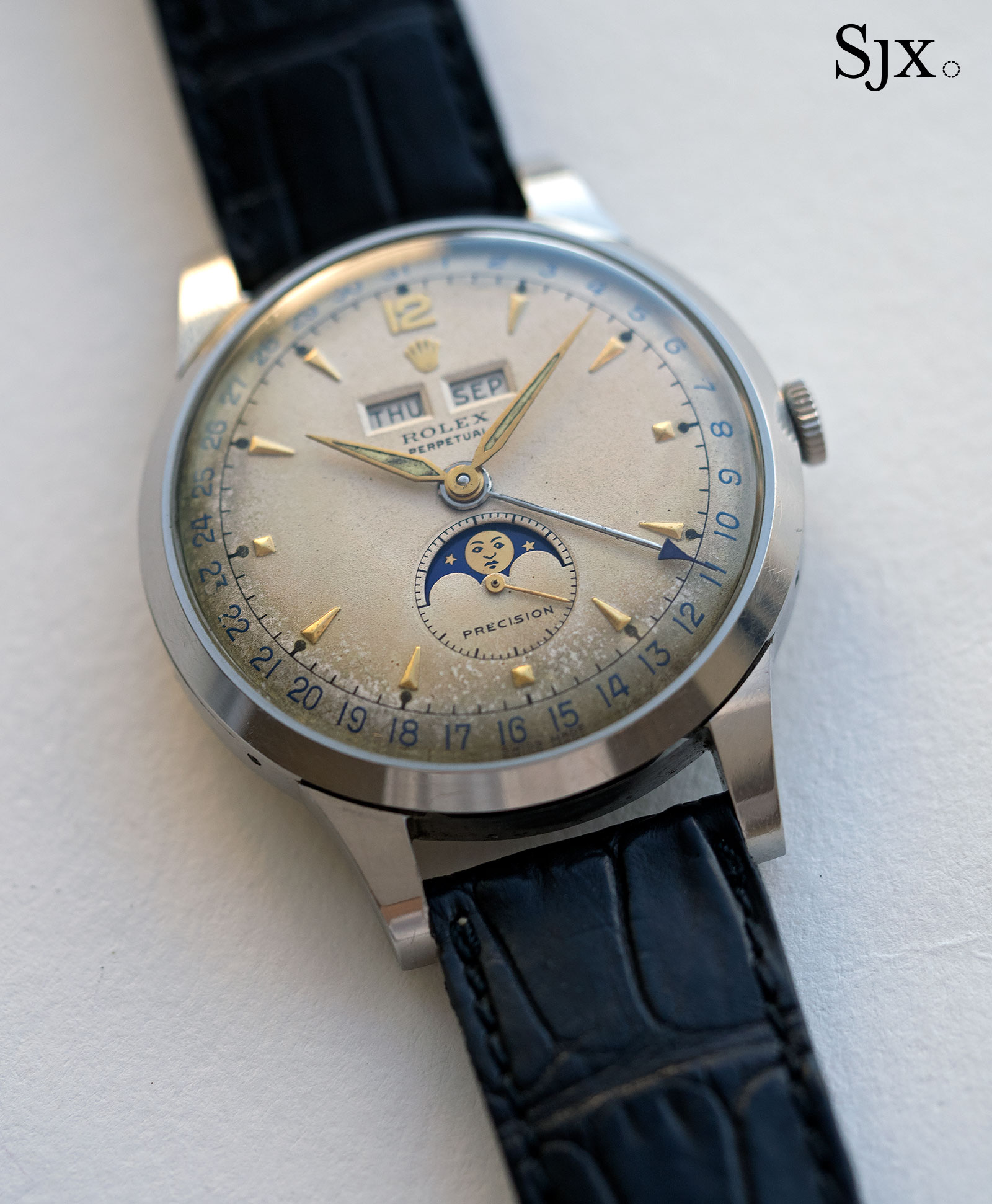 An example of a ref. 8171 with a dial showing ageing, this one offered at Christie’s Hong Kong in 2017

The steel case is similarly well preserved. Fortunately, steel is notably harder than 18k gold, and even with comparably little wear, a steel case will stand the test of time better than gold, all things being equal (and the environment being cool, dry and non-corrosive since steel can rust).

This example show shows the slightest of scuffs, indicating it was probably worn or handled lightly over its 50 year life, but probably only on a handful of occasions, which might be related to its case serial number (more on that below). 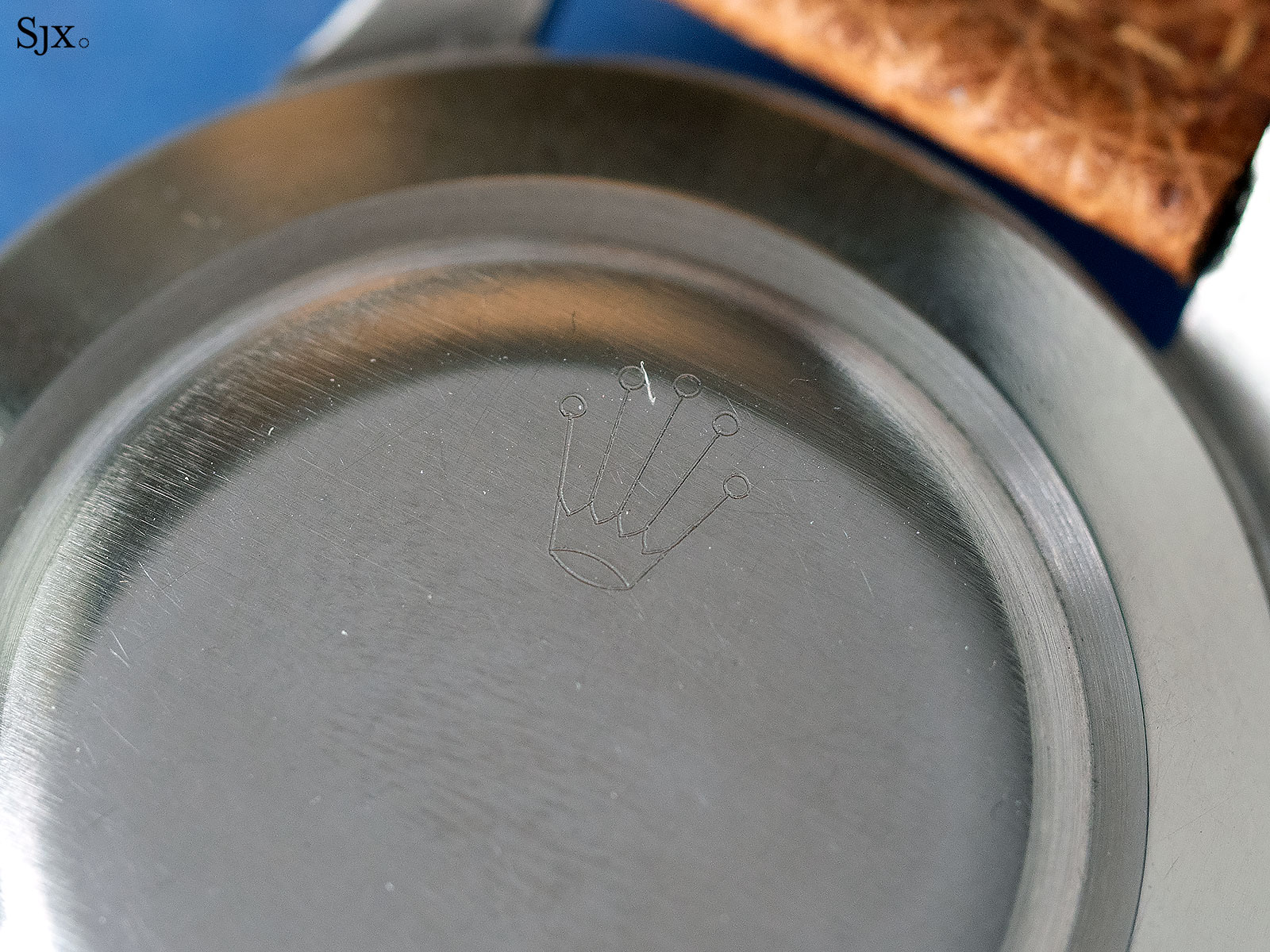 The lightly etched, but perfect, Rolex logo on the case back

The sharpness of the edges on the bezel and lugs is particularly striking, as is the grain of the brushed finish on the sides of the lugs. 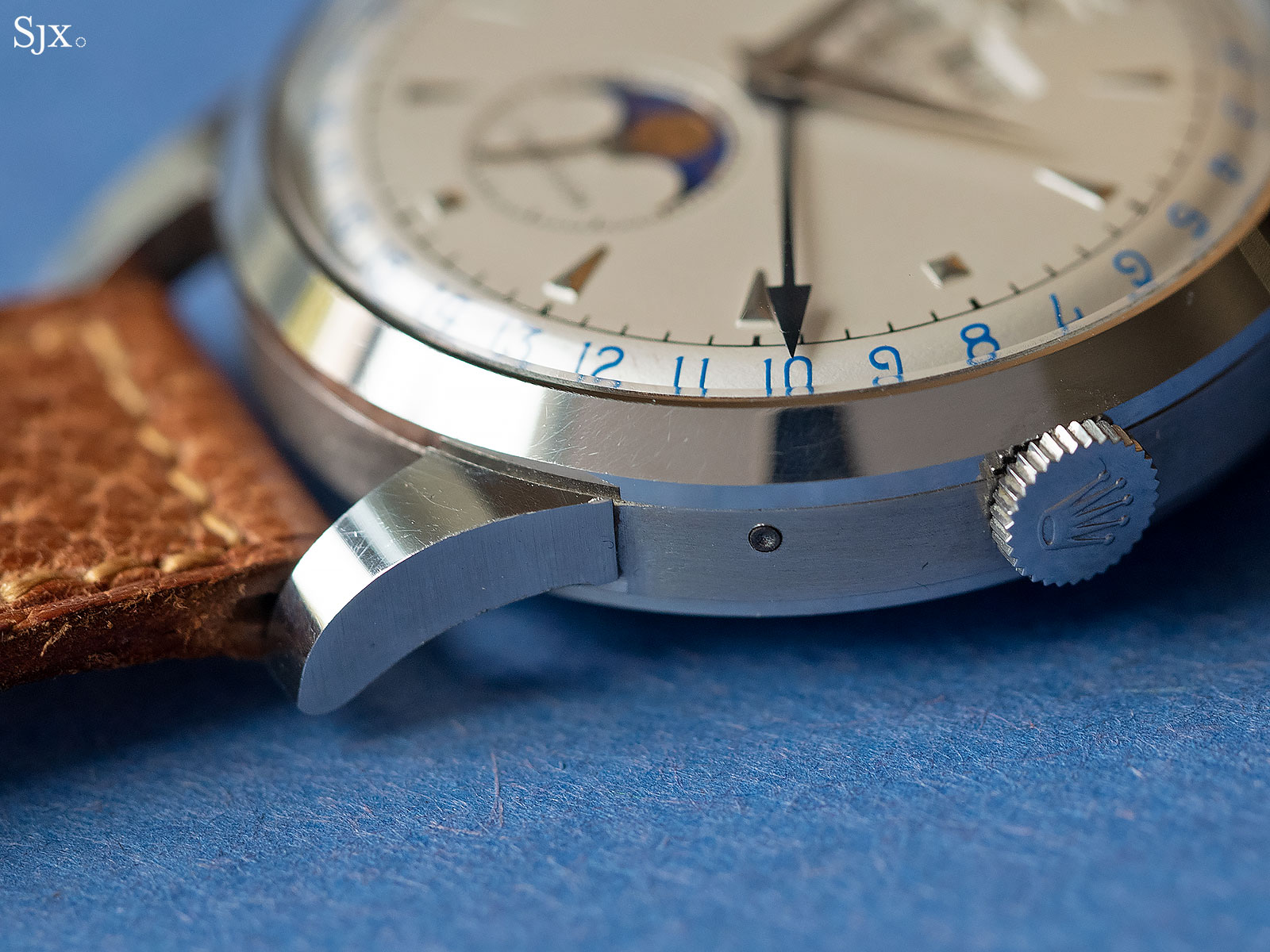 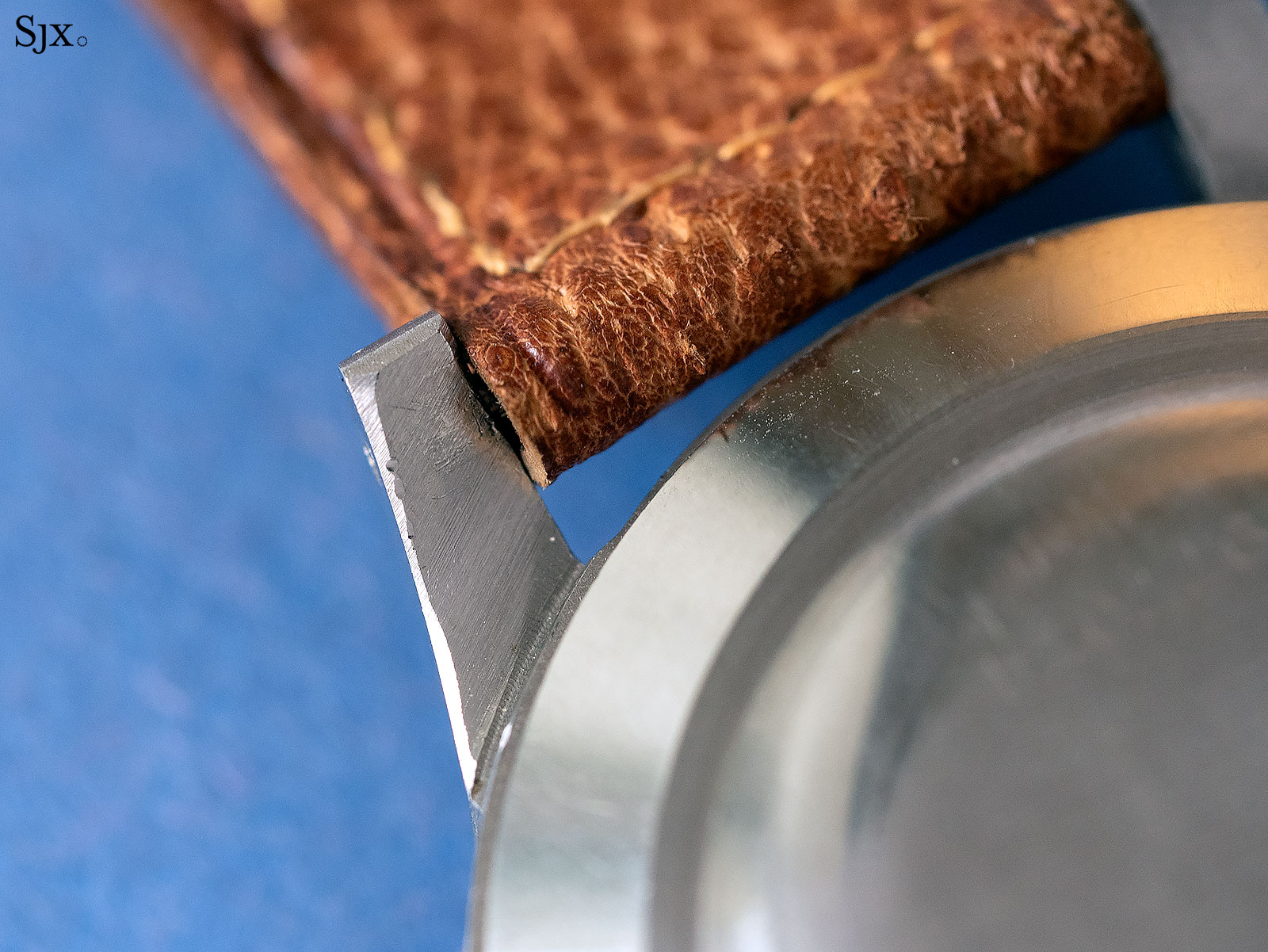 Ordinarily, such a state of preservation would raise the obvious question: has it been restored?

Fortunately, this ref. 8171, like the Cremsdorff, has been well known for several decades, and has looked pretty much the same all along. It last sold publicly at Christie’s Geneva in 2012 for 543,000 Swiss francs, and before that in 2004 at the same venue for 236,000 francs. The first time this watch appeared at auction is believed to have been at Antiquorum, during its heyday under founder Osvaldo Patrizzi, although details on that sale are not available now. A few years after the 2004 sale, the watch was photographed by collector John Goldberger for his book 100 Superlative Rolex Watches, and even 12 years later he still remembers its pristine condition.

When it was sold in 2012, the lot essay – probably written by a hyperventilating and exhilarated auctioneer – was full of superlatives: “a sheer thing of physical impossibility to find a crisper, sharper and better preserved specimen… the one example representing the gold standard for this model… the pristine appearance radiating from this ‘padellone’.”

The movement number of “56’948”, however, falls well within the known range of numbers for the 8171 movement, implying the watch contains a movement from the original run, but one that was installed in a case much later. The reason for this is unknown. Phillips speculates the watch might have been made in the 1960s for an exhibition, after the model was out of production, or it was produced earlier but never sold due to a wrongly engraved case number. Another possibility is that the watch was produced as a special order for a client who wanted what was then a discontinued model.

Padellone translates as “large frying pan”, a reference to the largish 38mm case of the ref. 8171, a quality that would have rendered it distinctly oversized in its day. That being said, it is not that large, and wears well by modern standards. (The ref. 4113 in the same sale, however, is large enough it feels a bit like a biscuit on the wrist.) And because this example is so crisp, it looks wonderful on the wrist. Condition aside, the ref. 8171 itself is a desirable watch, being one of only two triple calendar watches Rolex has ever made, the other being the ref. 6062, until the modern day Cellini Moonphase, the poor man’s “Bao Dai”.

And both the refs. 8171 and 6062 are notable for being the most complicated vintage Rolex watches powered by an in-house movement, the 10.5”’ diameter A295 automatic. The Rolex Datocompax “Jean-Claude Killy” of the same period, a chronograph with triple calendar, on the other hand, was powered by the Valjoux 72C. 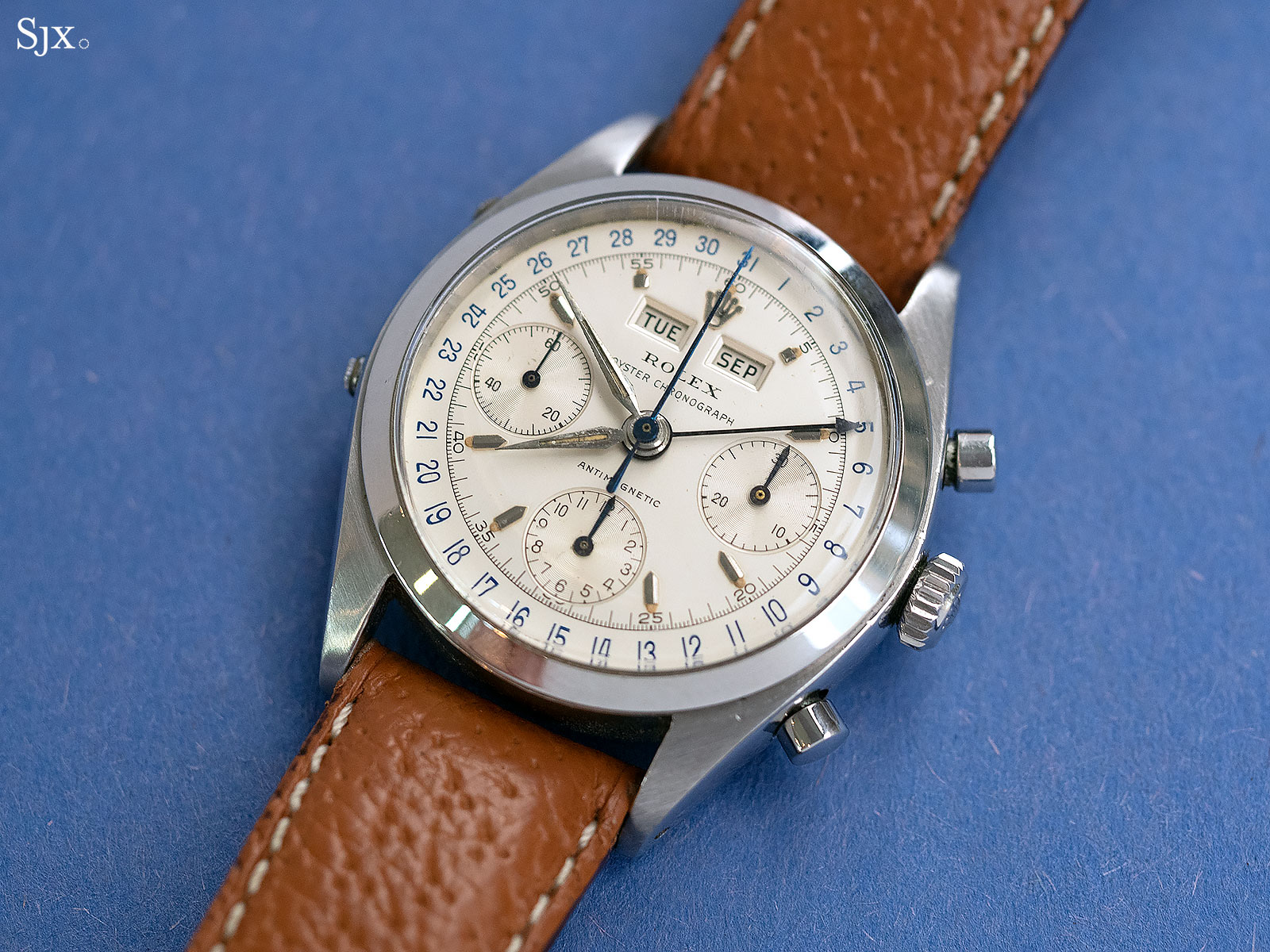 The disparity in prices is probably more pronounced for the ref. 8171 than for other vintage Rolex models, since the disparity in condition can be vast as a result of the case construction and resulting ageing. Because the ref. 8171 often turns up with a well-worn dial, it can sell for well below US$100,000 with the common yellow gold case; pink gold cases are the rarest.

In May of this year Phillips sold a ref. 8171 in yellow gold distinguished only by its superb condition – but not quite as fine as this steel example – for 980,000 Swiss francs, or almost US$1.00m.

A month after, Sotheby’s sold a well-worn specimen in yellow gold for US$118,750. A year before that, a heavily aged example, also in yellow gold, sold at Phillips for 93,750 francs. 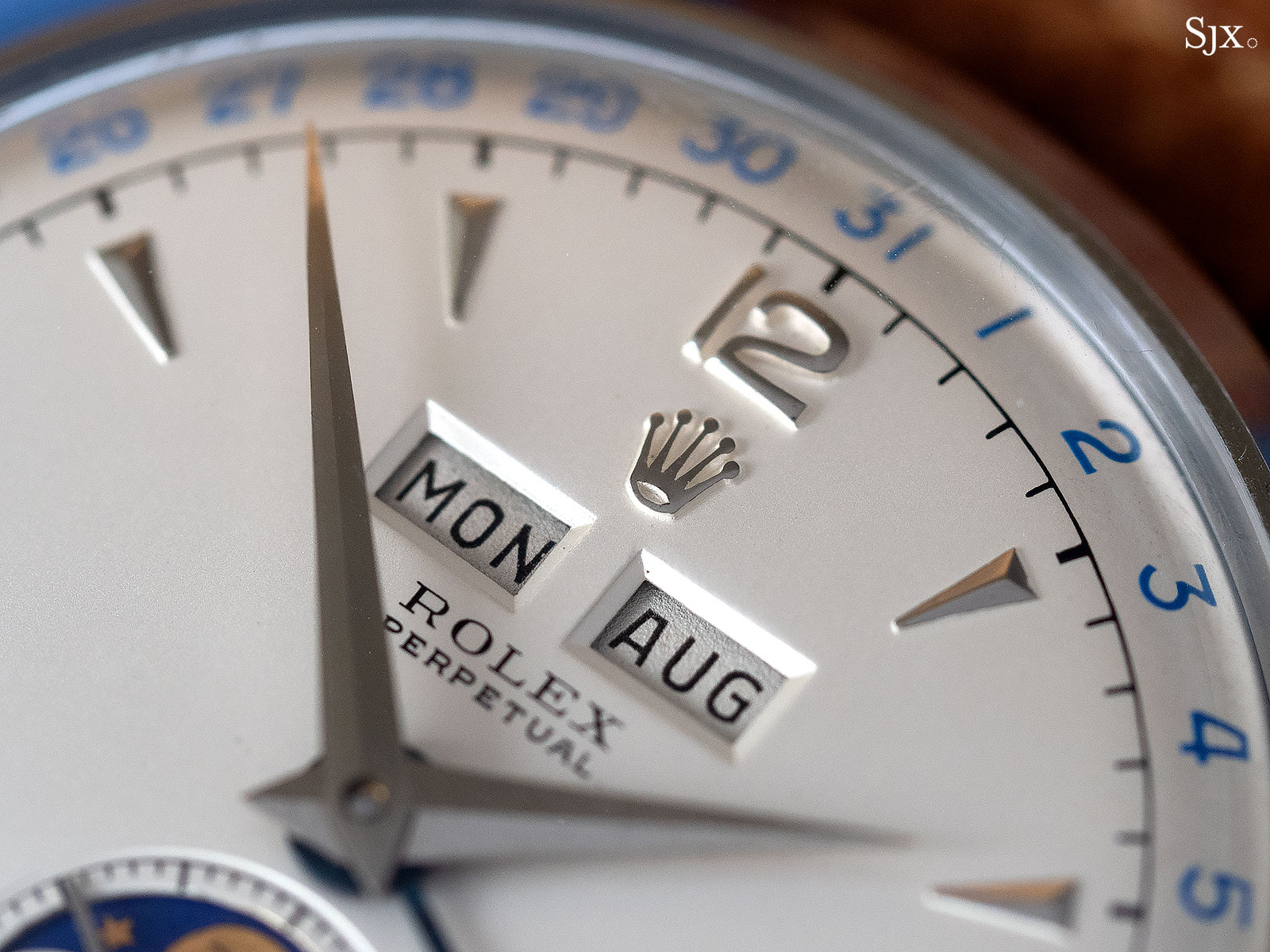 The last time a comparably well preserved ref. 8171 in steel came up for sale was at Phillips Hong Kong in 2016, and it sold for 7.88m Hong Kong dollars, or about US$1.00m, to a noted Asian collector. That had a grené, or “grained”, dial, although the dial showed the faintest signs of ageing.

The dial finish is the second factor that might count against this example. This ref. 8171 has a dial with an almost uniform, silvered finish, with only the slightest of variation in texture on the date track. In contrast, the pronounced two-tone finish – where the date track is an obvious shade darker – on other examples of the ref. 8171, including the record-setting example sold in Hong Kong, is regarded as more attractive.

Still, this watch has an estimate of 500,000-1.00m Swiss francs, and should comfortably reach the high estimate. It’s lot 175 in The Geneva Watch Auction: X that takes place on November 10, 2019. For the full catalogue, visit Phillips.com.

Correction October 14, 2019: The ref. 8171 pictured has a barely discernible two-tone dial finish with a slight variation of texture on the date track, and is not single tone as previously described.