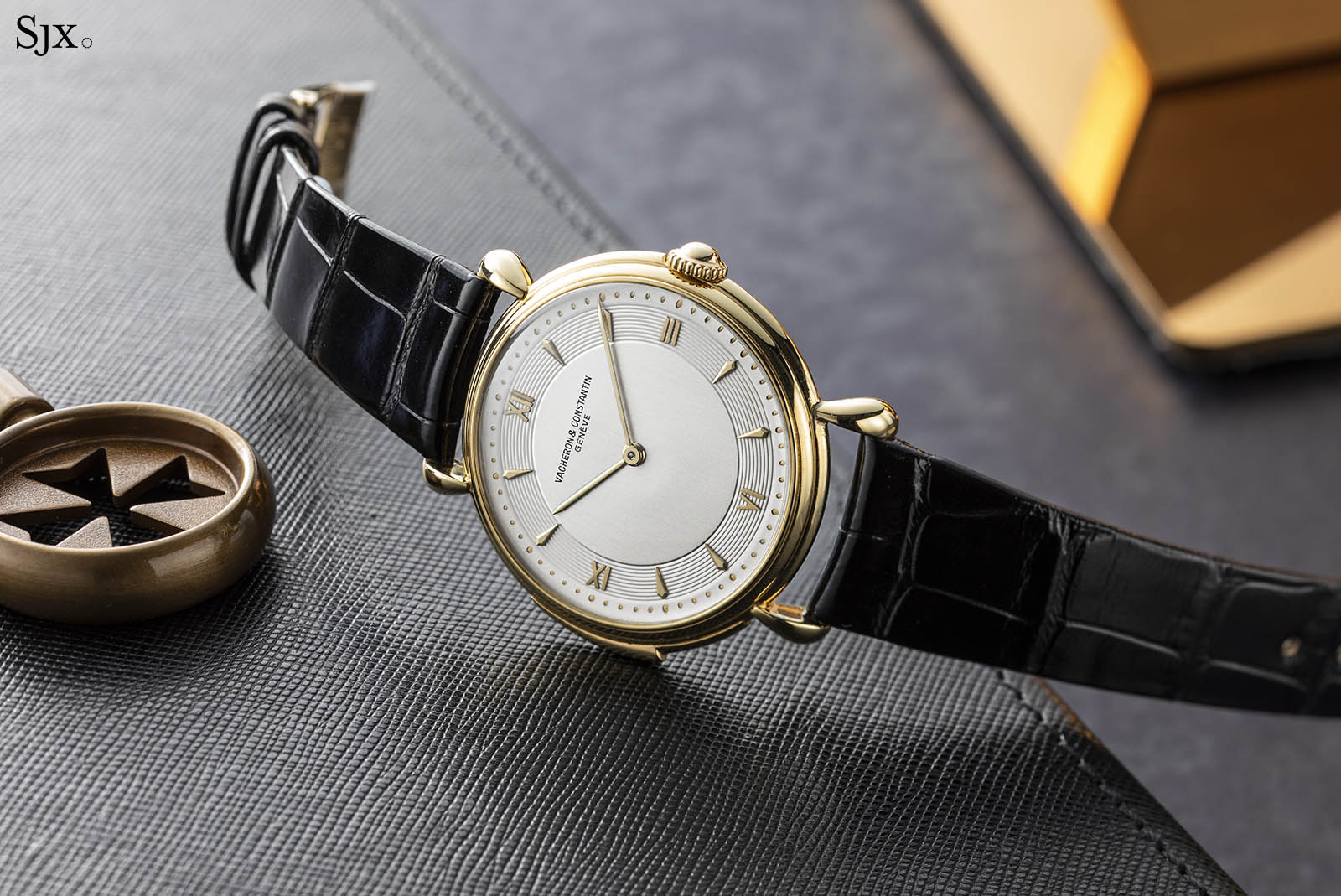 A selection is available year-round at three Vacheron Constantin boutiques – the two in Geneva and one in New York City – with the balance travelling and making stops at other boutiques around the world. From now till the end of October, a pick of Les Collectionneurs watches, including the exquisite ref. 4261 minute repeater, are in Singapore, over a year since the line-up last came by.

As a whole, the 19-piece selection in Singapore presents a rich and interesting overview of Vacheron Constantin’s midcentury history. The brand’s mastery of case and lug styles is well illustrated, from the dramatic, wing-shaped “Batman” Chronometre Royal to the familiar “teardrop” lugs of the ref. 4178 chronograph. 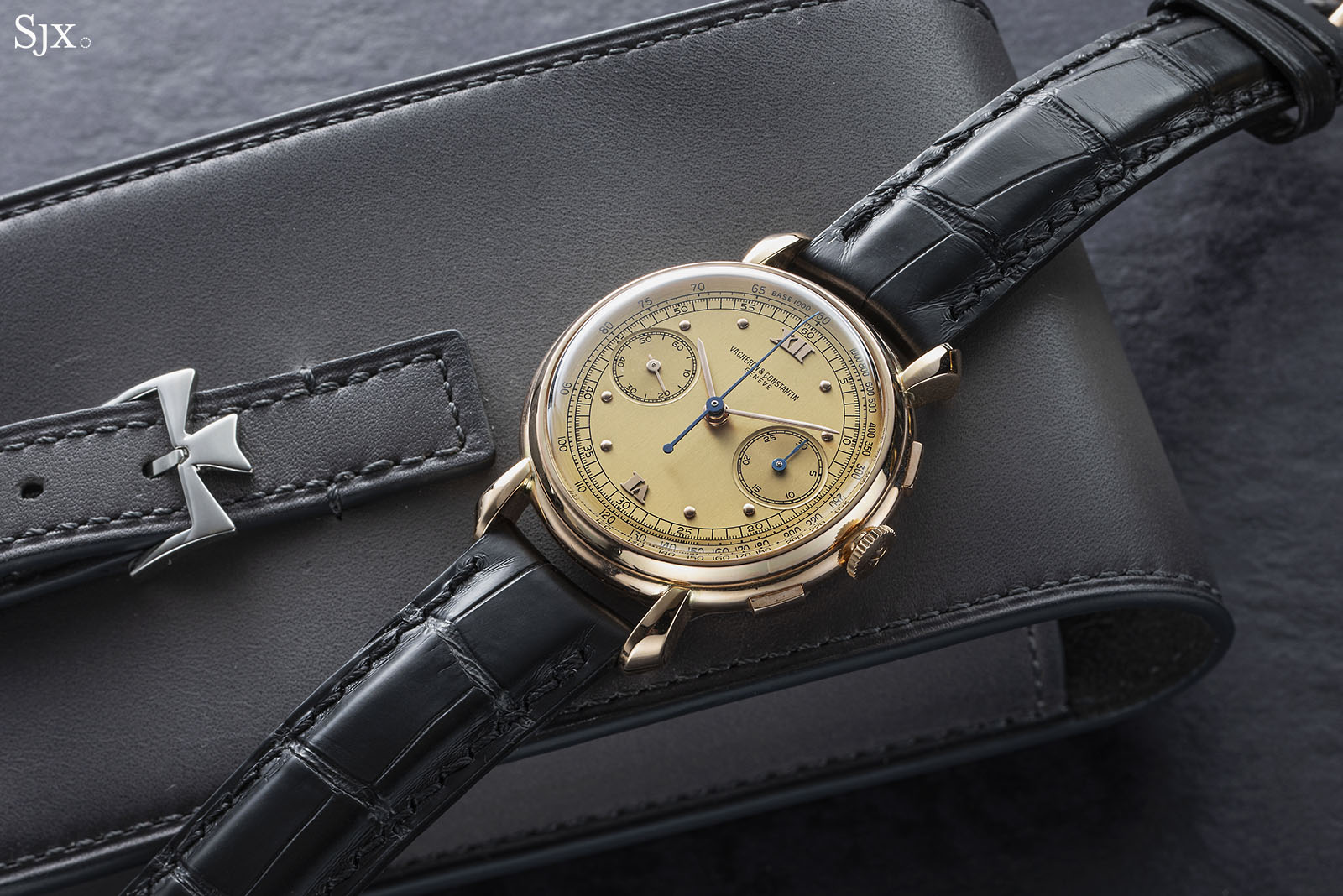 While the models in Les Collectionneurs are diverse, and also acquired from a variety of sources, ranging from private collectors to auctions, they are all selected based on shared criteria: rarity, provenance, and of course, current trends.

More importantly, the watches are fully and correctly restored, and delivered with an archive extract as well as a two-year warranty. For the client, that’s essentially the same assurance as when buying a brand new watch. Importantly, the factory approach to restoration emphasises originality and aesthetics – polishing and cleaning at the minimum – which sometimes runs counter to the liking for originality in vintage watch-collecting circles.

Moreover, in addition to a paper certificate, each watch is now accompanied by a digital certificate of authenticity, secured in a blockchain app built by Parisian tech start-up Arianee.

Here’s a look at some of the highlights from Les Collectionneurs in Singapore.

Rare and underrated, the Vacheron Constantin automatic ref. 6782 was possibly the first time that the brand dipped its toes into creating a sports watch – and a supremely elegant one at that. When it left the factory, the ref. 6782 was water-resistant, thanks to a screw-down case back, though 50 years later it is not rated as water-resistant.

The ref. 6782 was nicknamed the “Turnograph”, or “Thunderbird” due to its resemblance to the Rolex ref. 1625, which had a similar rotating bezel and the same nicknames. The model was produced for about a decade from the early 1960s, predating the ref. 222 designed by Jorg Hysek that inspired the modern-day Overseas. 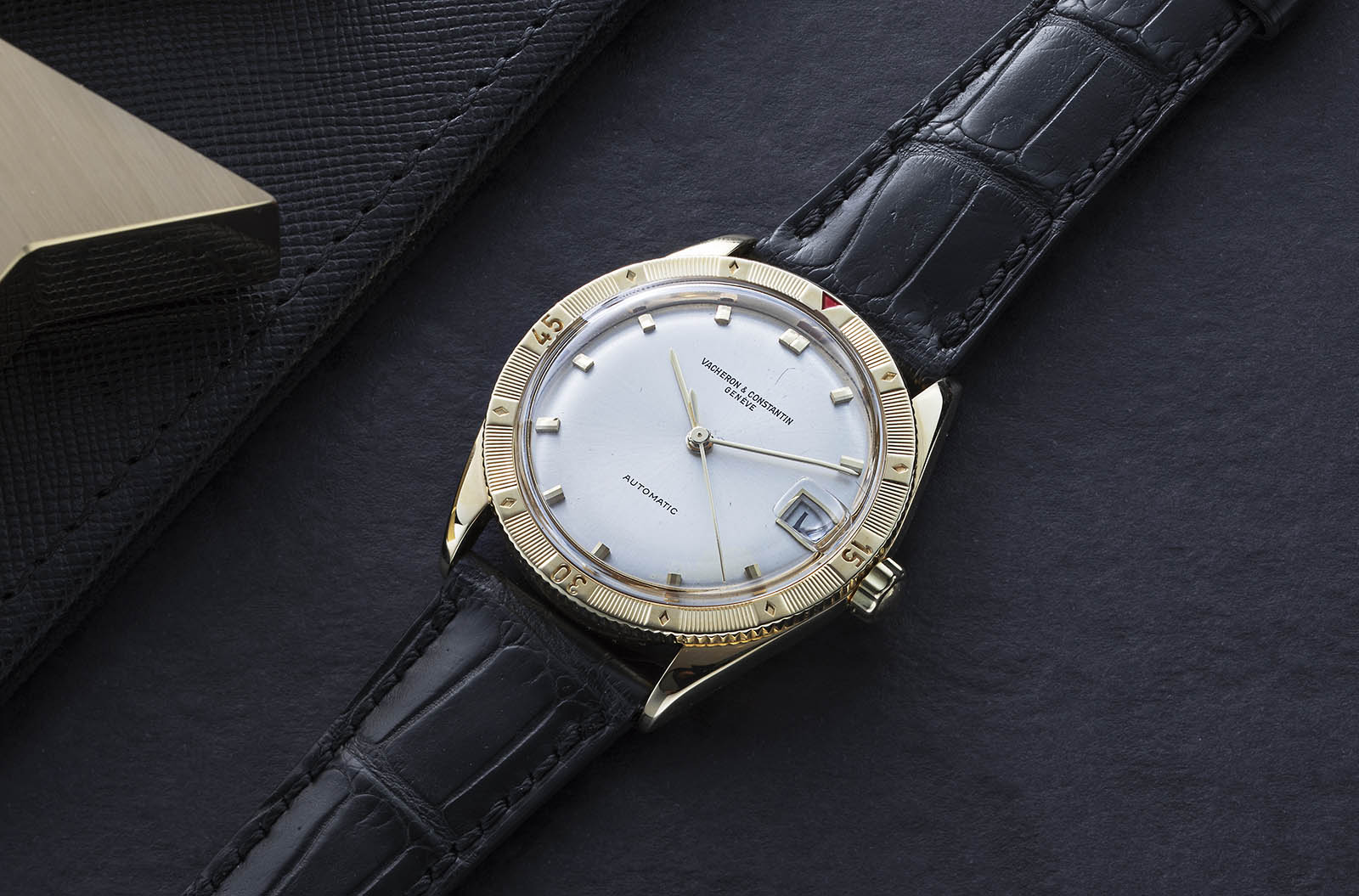 This example is from 1963 and features a yellow gold case. Like the Rolex “Thunderbird”, its most distinctive feature is its bi-directional rotating bezel. However, the bezel in the ref. 6782 is finely milled and engraved with Arabic numerals at the quarters. And it is also slim, making it more elegant. 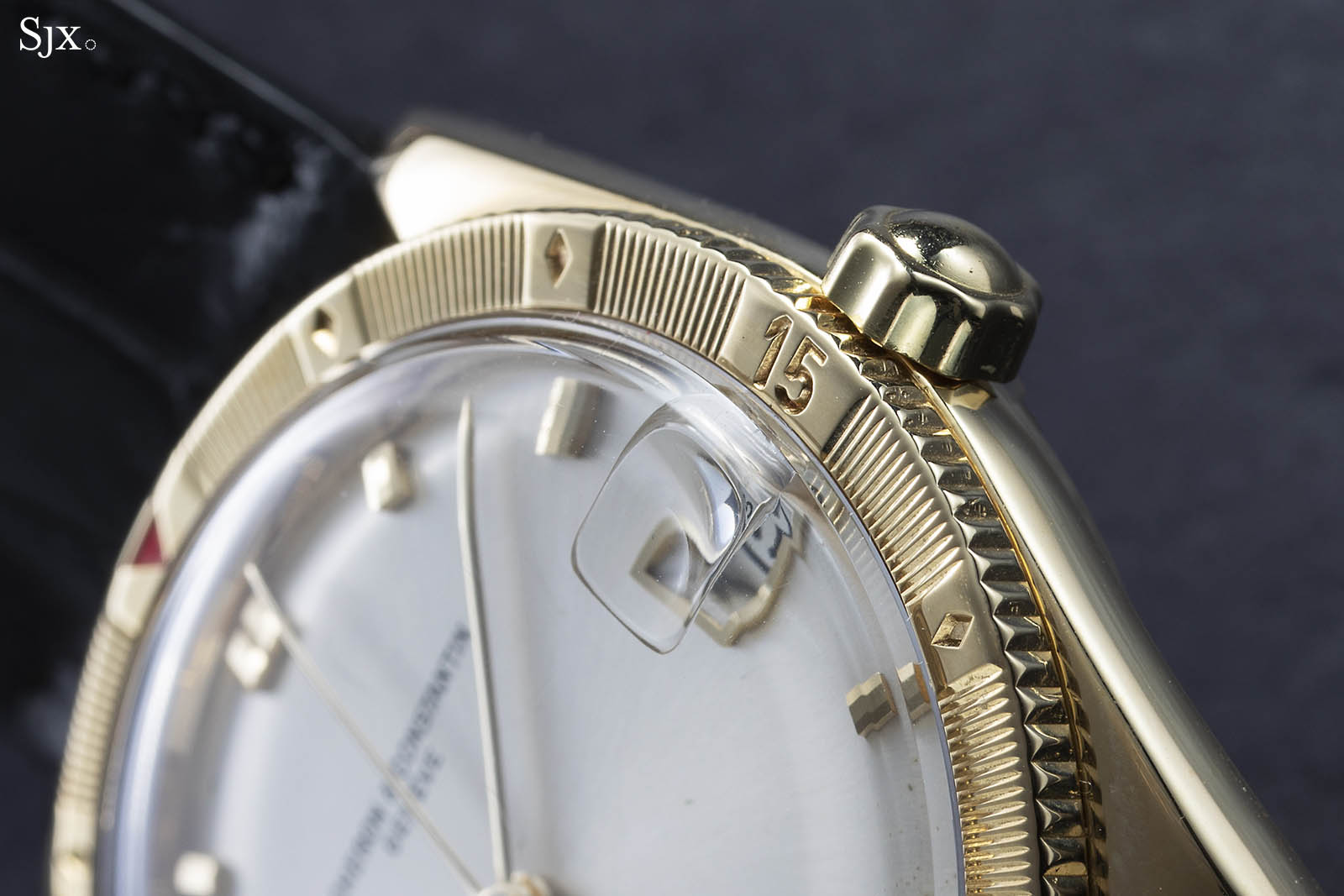 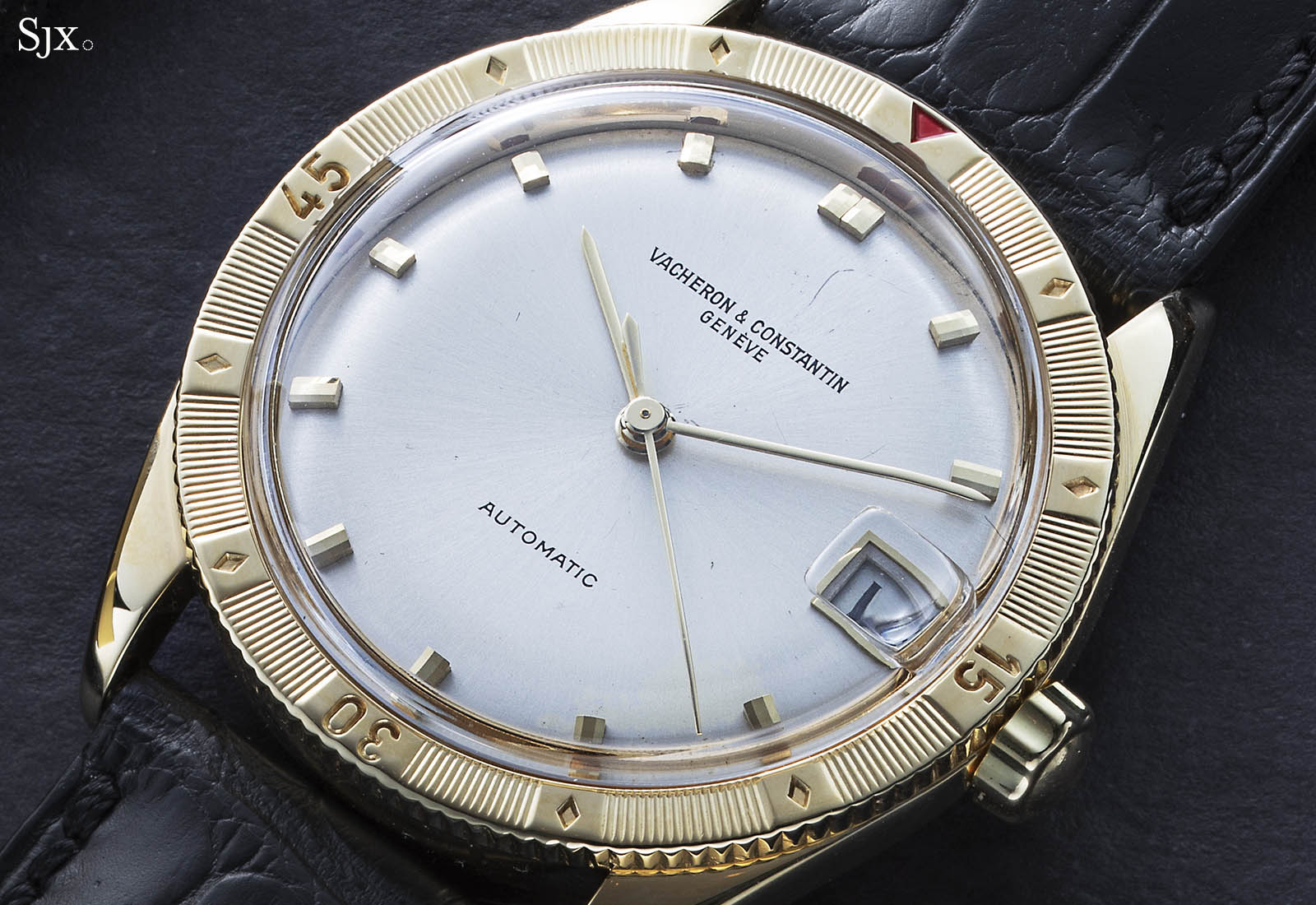 Notably, less than 100 examples of the ref. 6782 were made, all of which were powered by the in-house, automatic cal. 1072 that bears the Poincon de Geneve, or Geneva Seal. It is priced at 34,600 Singapore dollars.

Perhaps the quintessential vintage Vacheron Constantin chronograph is the ref. 4178. This example is from 1943, and has a beautiful pink-gold case combined with a champagne-coloured dial. 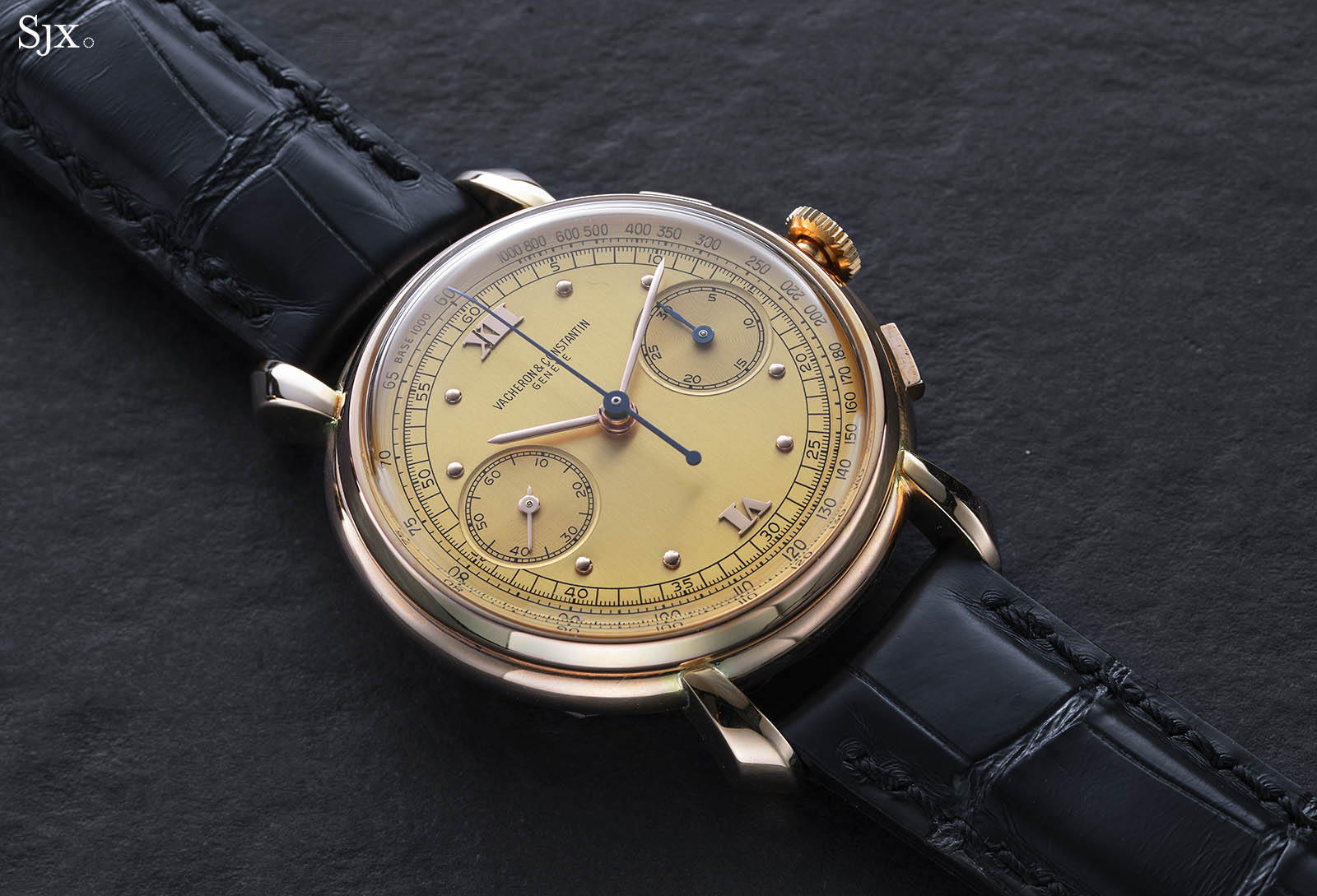 This example is powered by the V434. It is believed that approximately only 280 pink-gold models were equipped with this movement. As a result, it has a 36mm case, oversized in vintage terms, with a stepped bezel and beautiful faceted, teardrop lugs.

Its champagne dial is particularly well-preserved and clean. While entirely original, it has no doubt been given a once-over during servicing, particularly to restore the lustre of the applied hour markers.

The watch is priced at 62,500 Singapore dollars.

The next watch in the collection is a return visitor to Singapore – it was part of the Les Collectionneurs exhibition in 2018 – but worth a mention in any case. The sublime ultra-thin ref. 4261 minute repeater.

Launched in 1944 and produced until 1951, the ref. 4261 was the first ultra-thin minute repeater from Vacheron Constantin, featuring an impossibly beautiful case with a thin, double-stepped bezel and rounded teardrop lugs. 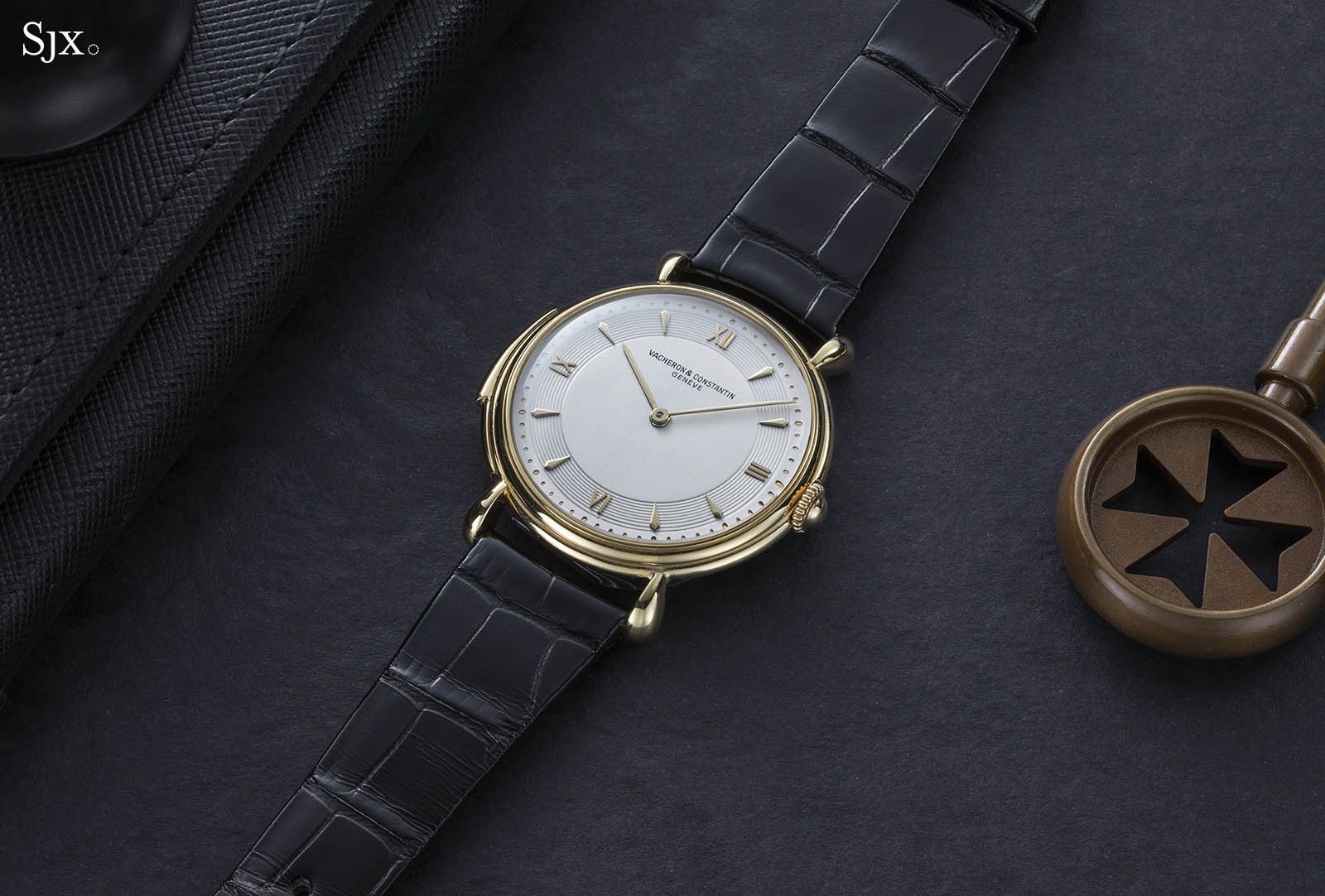 The dial is silvered with a pearled minute track and a concentric guilloché chapter ring with four applied Roman numerals and eight pointed, lapidated indices for the hours. 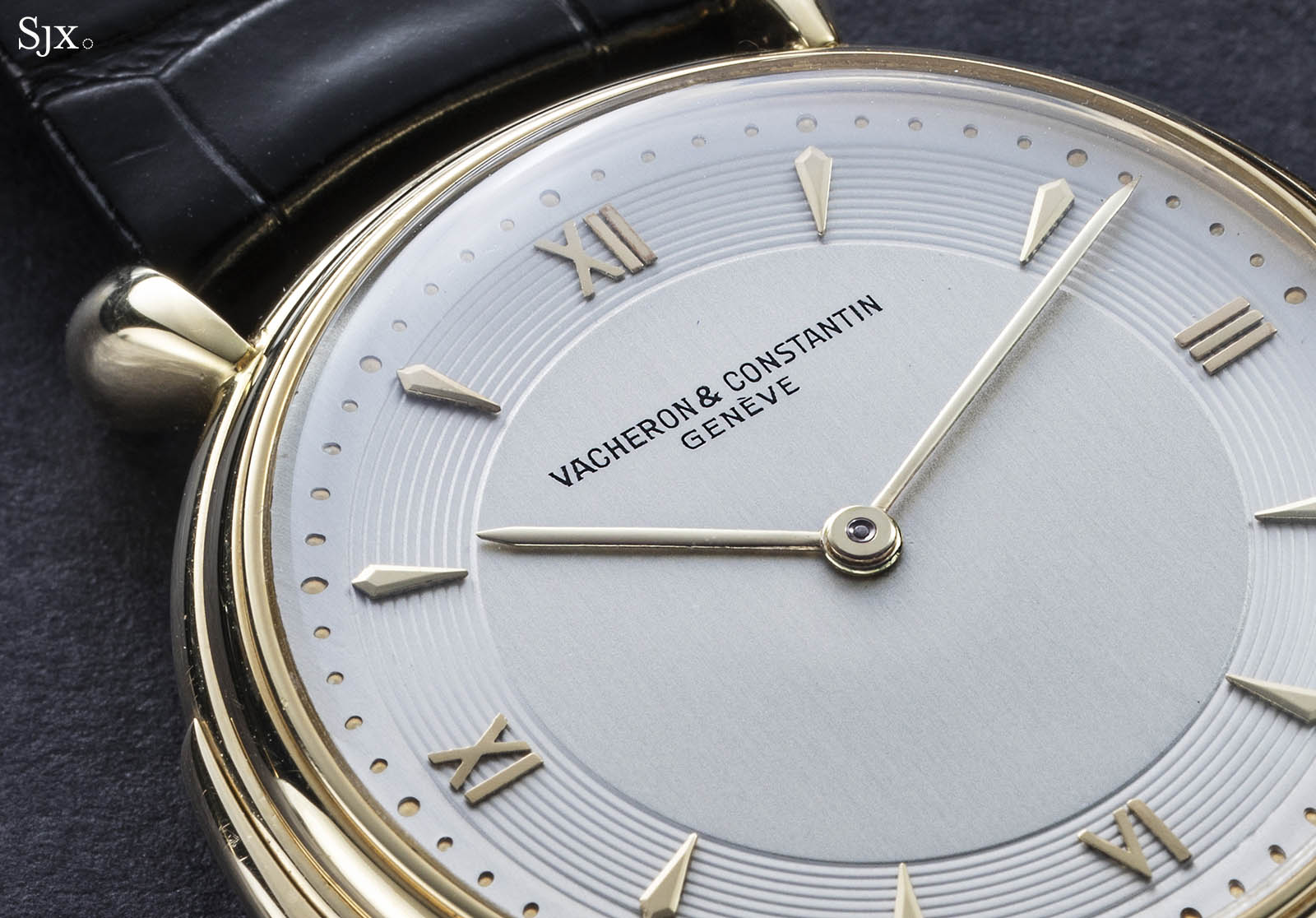 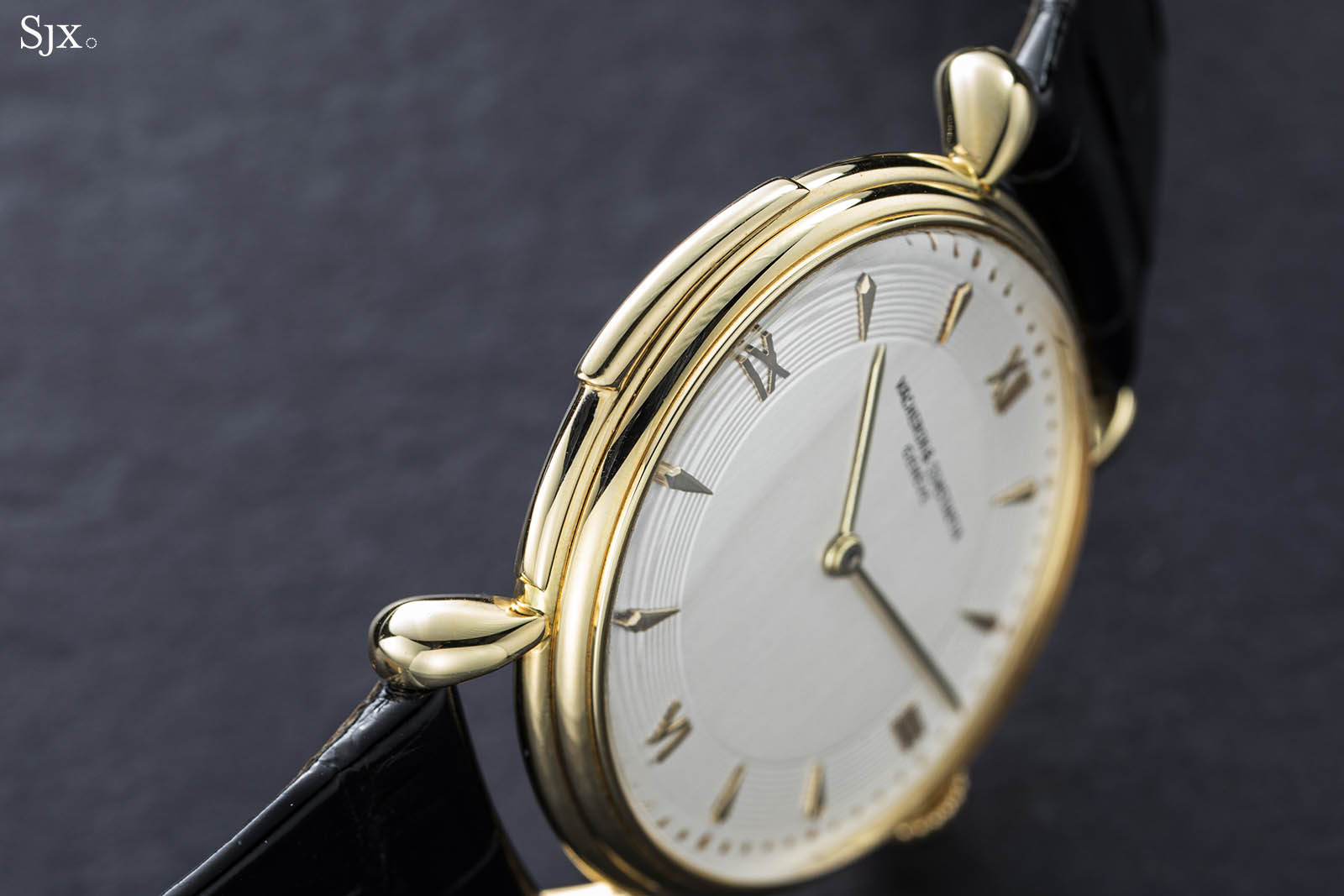 It is powered by the largest diameter minute repeating calibre used at the time, measuring 13-ligne but just 5.25 mm in height. It is believed that only a third of the production run of the ref. 4261 were powered by this particular movement; the others used a 12-ligne calibre, making this exceptionally rare.

One of the most striking timepieces in the collection is an Art Deco style pocket watch with a guichet, or “window”, display. The Art Deco movement saw the rise of digital displays in watchmaking, including jumping and wandering hours, in both pocket- and wristwatches. Though this Vacheron Constantin example was one of the many such pocket watches with jumping hours produced from the first quarter of the 20th century – other notable makers include Audemars Piguet, Breguet, and Patek Philippe – it is unusual for including a day and date display. Measuring 43.5mm wide, the case is made of yellow and white gold, with the dial in brushed white gold. It features square and fan-form apertures for the jumping hours and minutes, along with twin, in-line windows for the digital day and date display sit just above.

Intended as the pinnacle of Vacheron Constantin watchmaking in chronometry, design and finishing, the “Chronomètre Royal” series began with pocket watches in around 1910, and subsequently wristwatches in 1953. In 1962, Vacheron Constantin unveiled the Chronomètre Royal ref. 6694, equipped with the brand’s first chronometer-certified automatic movement. The movement was the calibre K1072, based on the Jaeger-LeCoultre 493, but modified to have central seconds and date, while being upgraded and finished to Geneva Seal standards. 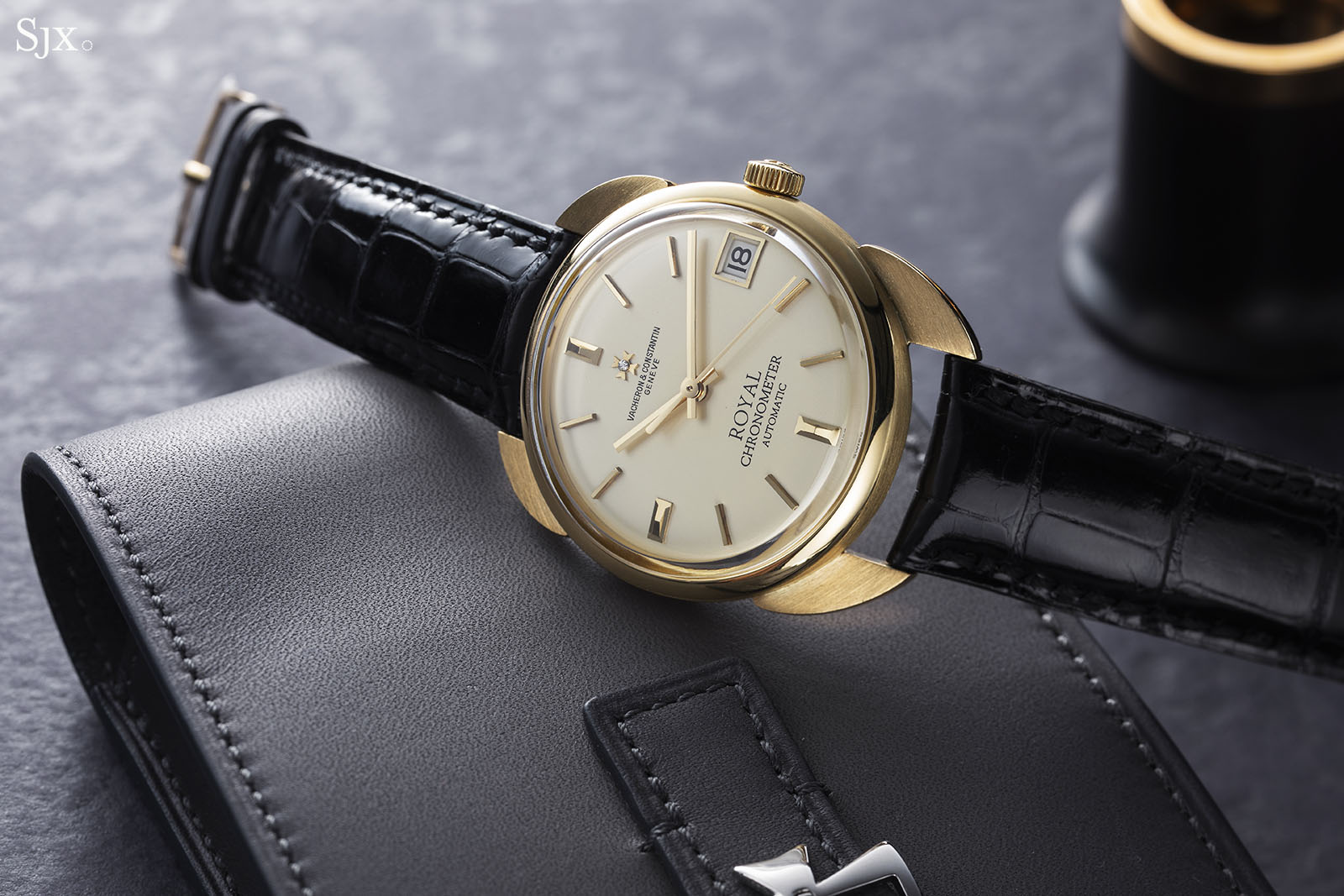 Measuring 35mm wide, the ref. 6694 is one of the most distinctive due to its dramatic, wing-shaped lugs, which gave rise to the “Batman” nickname. This particular example is in yellow gold and dates to 1967. It features a silvered dial with applied gold indexes and a Maltese cross at 12 o’clock paired with yellow-gold baton hands.

The final highlight is a ref. 4240 Triple Calendar that inspired the modern Historiques Triple Calendrier 1942 introduced in 2017.

Though Vacheron Constantin has a long history of producing calendar watches, it wasn’t until the ref. 4240 in 1942 that they were serially produced. The ref. 4240 was made in several different case materials and dial variations, all of which were powered by the hand-wound cal. 485. 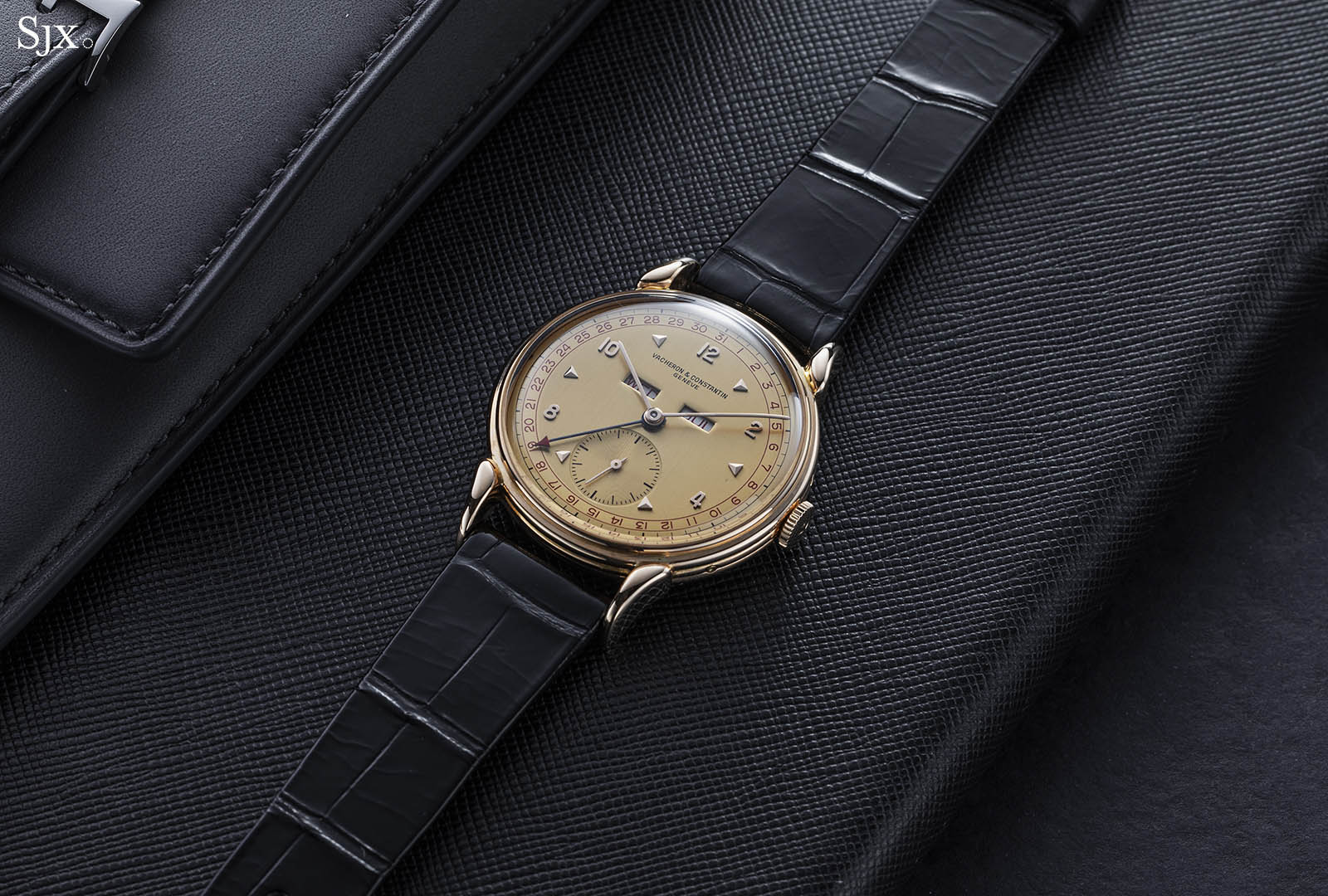 The movement was based on the time-only Vacheron cal. 453, in turn derived from the Jaeger-LeCoultre cal. 449. This particular example has a pink gold case with large, sculpted “claw” lugs and triple fluting on the case band. 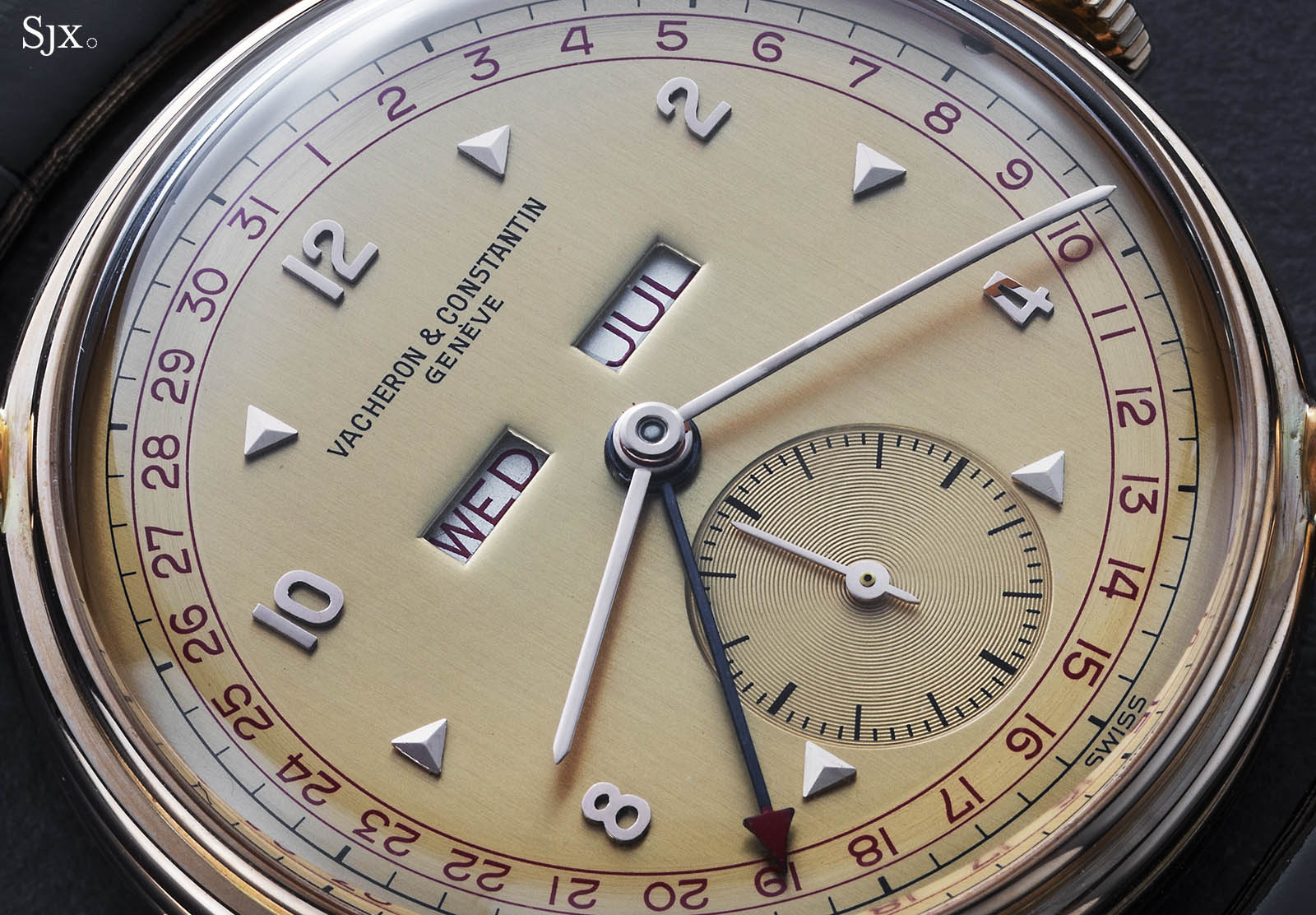 Its beautiful and warm two-tone “champagne” dial features applied pink-gold numerals and triangular indices. The calendar layout is eminently traditional: day and month are indicated via two apertures on the top part of the dial, whereas the date is indicated by a central arrow.

The watch is priced at 51,500 Singapore dollars.

Les Collectionneurs will be at the Vacheron Constantin boutique at ION Orchard from September 18 to 30, while the “Nicknames” exhibition is on show till the end of October. It’s open daily from 10:00am to 9:30pm.

Correction October 4, 2019: The Les Collectionneurs was available at the ION Orchard boutique till September 30, and not October 30 as stated in an earlier version of the article.